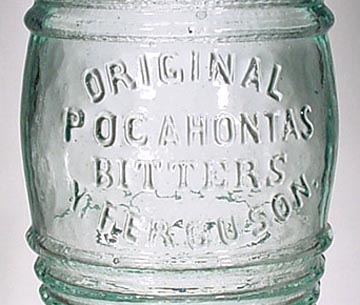 A favorite of any bitters collector, figural collector and possibly many other bottle collectors is the ORIGINAL POCAHONTAS BITTERS. This rare figural barrel has a great historic name, is perfectly proportioned and comes in a drop dead, gorgeous shade of aqua. You will not get a color run of these barrels like the other Indian favorite, OLD SACHEMS BITTERS AND WIGWAM TONIC but if you are fortunate enough to possess one, you will most likely isolate it from other barrels, like I do, to celebrate the beauty of the bottle. I am actively looking for more information on who made this bottle and where, so if you have any information, please forward.

Based on new material provided by bitters authority Ted Krist at the 2018 Cleveland National, we now know that there was a ‘Yates’ Ferguson who is the “Y.” Ferguson embossed on the bottle. This makes finding information a bit easier.

Yates Ferguson was born in Westchester County, New York on 19 June 1823 and migrated like many young men to California in 1849 for the gold rush. He settled in Greenwood Valley near Sacramento and engaged in mining and mercantile pursuits. The California Gold Rush started when gold was discovered at Sutter’s Mill in 1848. The arrival of prospectors in droves ruined Sutter’s New Helvetia and trade began to develop around a wharf he had established where the American and Sacramento Rivers joined.

In 1850, Ferguson lost his establishment and goods to a fire in Sacramento. First a major flood devastated the city that year. Rain from heavy storms had saturated the grounds upon which Sacramento was built, and the American and Sacramento rivers crested simultaneously. In April of the same year, the city experienced its first major fire. A second fire in November destroyed a number of commercial establishments in the city, including Yates Ferguson.

Ferguson returned to New York City in 1853 and established an export trade in California wines and liquors. He also carried on the same business in California. I suppose that somewhere between 1855 and 1860, he put out the Pocahontas Bitters. We are still tying to establish the exact date.

Yates Ferguson died at home in New York in 1887.

Matoaka aka Rebecca Rolfe aka Pocahontas 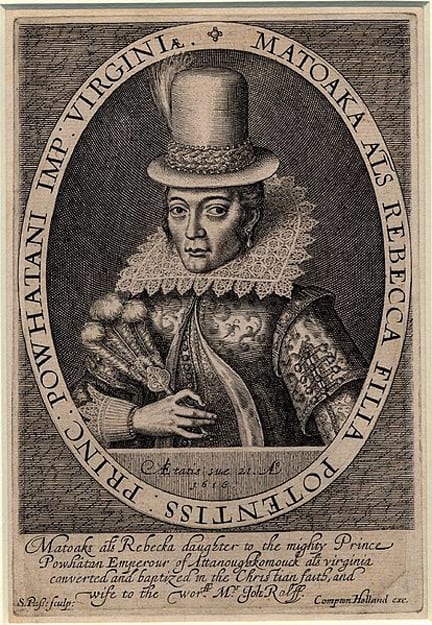 [Wikipedia] Pocahontas (born Matoaka, and later known as Rebecca Rolfe, c. 1595 – March 1617) was a Virginia Indian notable for her association with the colonial settlement at Jamestown, Virginia. She was the daughter of Chief Powhatan, the head of a network of tributary tribal nations in the Tidewater region of Virginia. In a well-known historical anecdote, she is said to have saved the life of an Indian captive, Englishman John Smith, in 1607 by placing her head upon his own when her father raised his war club to execute him.

Pocahontas was captured by the English during Anglo-Indian hostilities in 1613, and held for ransom. During her captivity, she converted to Christianity and took the name Rebecca. When the opportunity arose for her to return to her people, she chose to remain with the English. In April 1614, she married tobacco planter John Rolfe, and, in January 1615, bore him a son, Thomas Rolfe.

In 1616, the Rolfes traveled to London. Pocahontas was presented to English society as an example of the civilized “savage” in hopes of stimulating investment in the Jamestown settlement. She became something of a celebrity, was elegantly fêted, and attended a masque at Whitehall Palace. In 1617, the Rolfes set sail for home, but Pocahontas died at Gravesend of unknown causes. She was buried in a church in Gravesend, but the exact location of her grave is not known.

Numerous places, landmarks, and products in the United States have been named after Pocahontas. Her story has been romanticized over the years, and she is the subject of art, literature, and film. Her descendants through her son Thomas include members of the First Families of Virginia‎, First Ladies Edith Wilson and Nancy Reagan, astronomer Percival Lowell and American reality television personality Benjamin Wade. 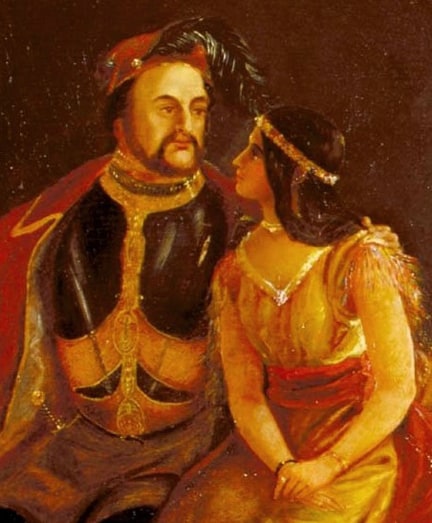 John Rolfe and Pocahontas; Rolfe was the first Englishman in America to cultivate tobacco. Painting by J.W. Glass, early 1850s.

Fought between English settlers of the Virginia Colony and Indians of the Powhatan Confederacy, this was a series of three intermittent conflicts which lasted from about 1910 through 1646.

The first war started in 1609 or 1610, after the the relationship between the Powhatan Indians and the English had soured due to the English demands for food. That winter of 1609-10 is known as the “Starving Time.” During that winter the English were afraid to leave the fort, due to a legitimate fear of being killed by the Powhatan Indians. As a result they ate anything they could: various animals, leather from their shoes and belts, and sometimes fellow settlers who had already died. By early 1610 most of the settlers, 80-90%, had died due to starvation and disease.

Peace and improved relations occurred after English settler, John Rolfe, married Pocahontas, the Powhatan Chief’s daughter, in 1614. A few years later, in 1617, Pocahontas died and the following year, her father, Chief Wahunsunacock also passed away. His succession was briefly passed on to his younger brother, Opitchapam, and then to his next younger brother Opechancanough. On March 22, 1622, Opechancanough, tired of English expansion, planned a coordinated attack on the English settlements. Because of a young Indian boy’s warning Jamestown itself was spared. Many outlying settlements were attacked and of a population of about 1,200 settlers about 350-400 were killed. After the, the Powhatan Indians withdrew, as was their way, to wait for the English to pack up and leave. However, the English did not leave and more conflicts arose and continued on and off for the next ten years, with few decisive victories. The settlers gave up the idea of coexisting with the Indians to begin a policy of extermination. By 1632, the Powhatan were pressured into land concessions in the western area of Chesapeake Bay.

In 1644, the third and last conflict of the Powhatan Wars began. Even though the English population, by this time, had risen to about 8,000, Opechancanough was still upset about the English encroachment on the land and planned another attack. Once again approximately 350-400 English were killed. Two years later, in 1646, Opechancanough, who was about 100, was captured by the English. While in captivity he was shot in the back by an English guard – against orders – and killed. His death began the end of the Powhatan Chiefdom. It also resulted in a boundary being defined between the Indians and English lands that could only be crossed for official business with a special pass. That situation lasted until 1677, when the Treaty of Middle Plantation was negotiated which established Indian reservations following Bacon’s Rebellion. (Source Legends of America) 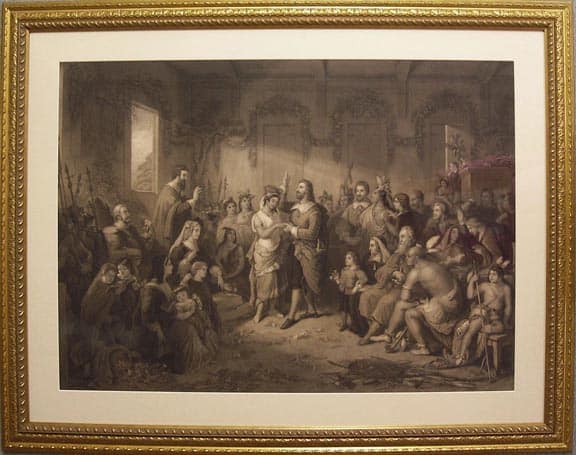 Antique engraving created by John C. McRae after Henry Brueckner’s original oil painting titled “The Wedding of Pocahontas”. The original artwork and this engraving were both done in 1855. The scene is the marriage ceremony of Pocahontas, daughter of Powhatan, Chief of the Algonquin tribe when as she is married to John Rolfe. The actual marriage date of Pocahontas was April 1614. – Ruby Lane 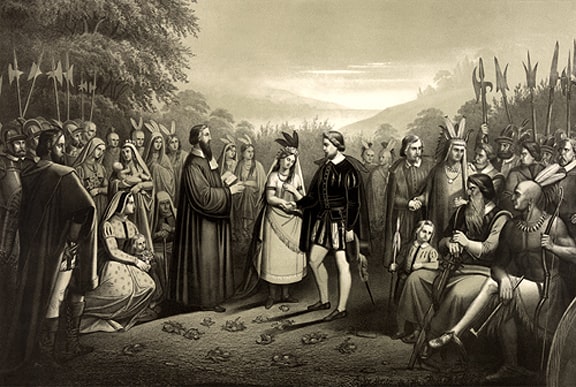 The Carlyn Ring and W.C. Ham listing in Bitters Bottles:

[Update 18 March 2013] When I was putting together the BITTERS BOTTLES SUPPLEMENT, Mike Larson of Washington State pointed out to me that there are two different spellings on the ORIGINAL POCAHONTAS barrel. Apparently the bottles were first made with the “POCHAHONTAS spelling. The mold was then corrected to “POCAHONTAS”. This was done by removing the “OCH” and replacing it with “OC” in the same space. This can be clearly seen when examining a “POCAHONTAS” barrel. The bottle was first cataloged as “POCAHONTAS” and numbered O 86. When the different spelling was discovered the second spelling was cataloged O 86.1. When this was discovered, I went back and looked at the examples in auction catalogs to try and determine if one embossing pattern was rarer than the other. I found an about equal number of each variant had been auctioned, contributing to my conclusion that neither was rarer than the other. There are also a very few ( 3 or possibly 4) open pontiled examples of the bitters in collections. I don’t know which embossing is on the pontiled examples. – Bill Ham

1849: Ferguson migrated to California in 1849 presumably for the gold rush. He settled in Greenwood Valley near Sacramento and engaged in mining and mercantile pursuits.

1850: Yates Ferguson lost his store and goods in a fire in Sacramento. 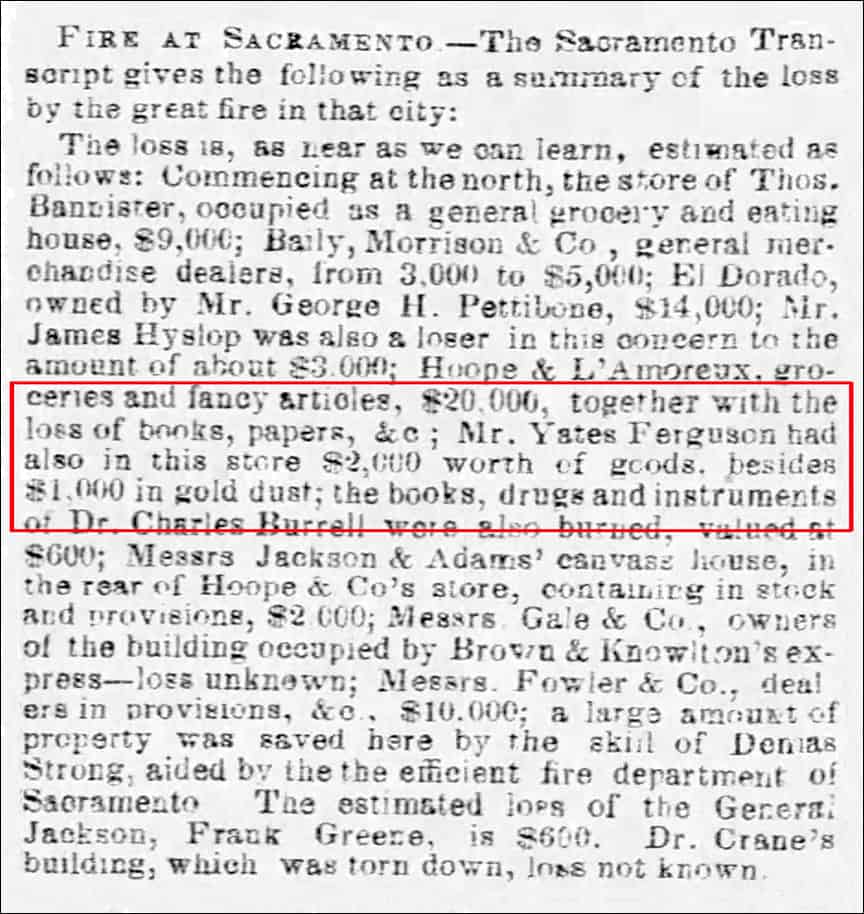 Yates Ferguson and Sacramento fire – The Baltimore Sundasy, Tuesday, May 28, 1850

1853: Yates returned to New York City in 1853 and established  an export trade in California wines and liquors. He also carried on the same business in California. 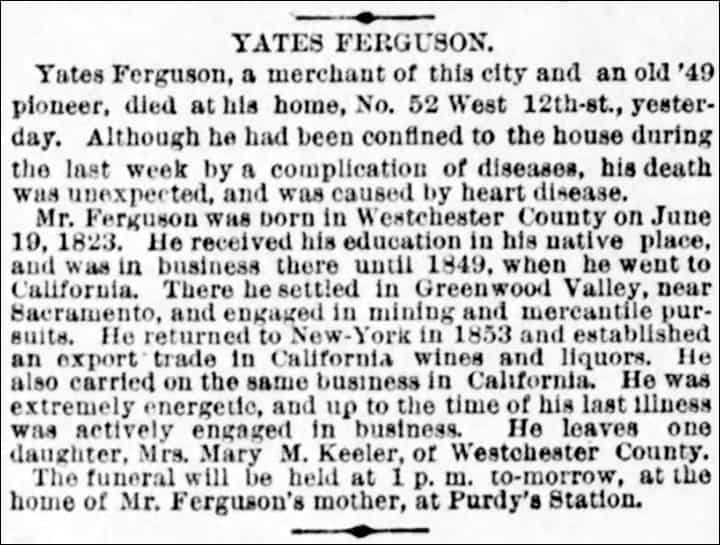 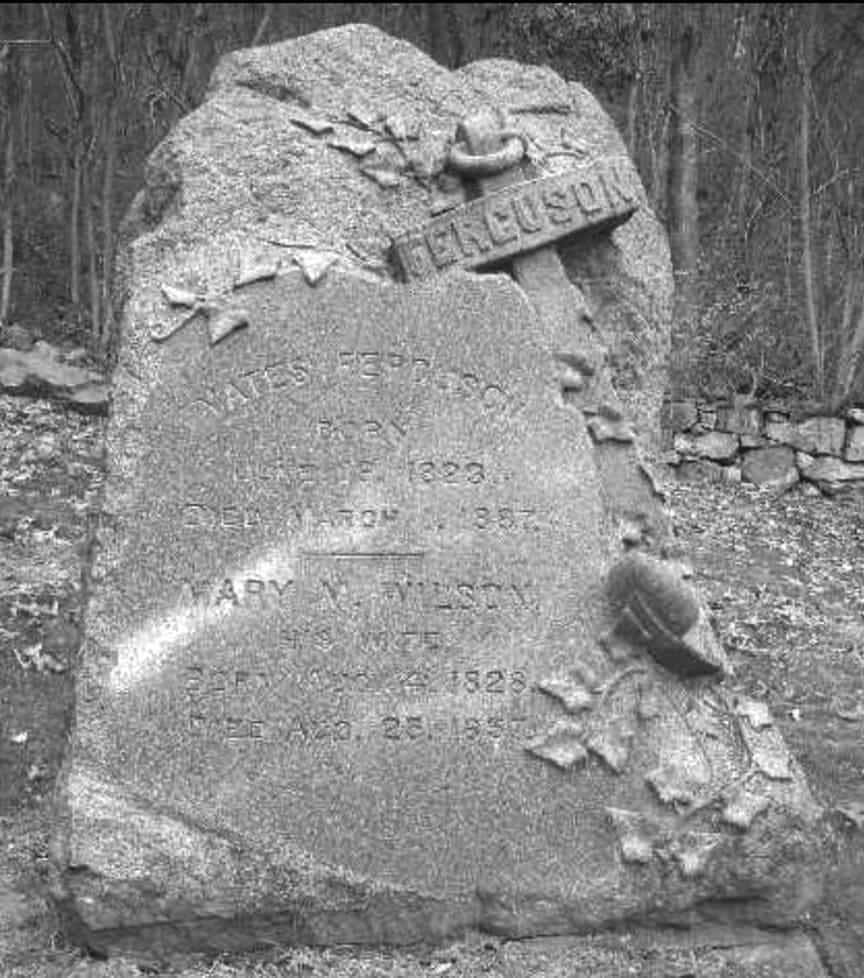 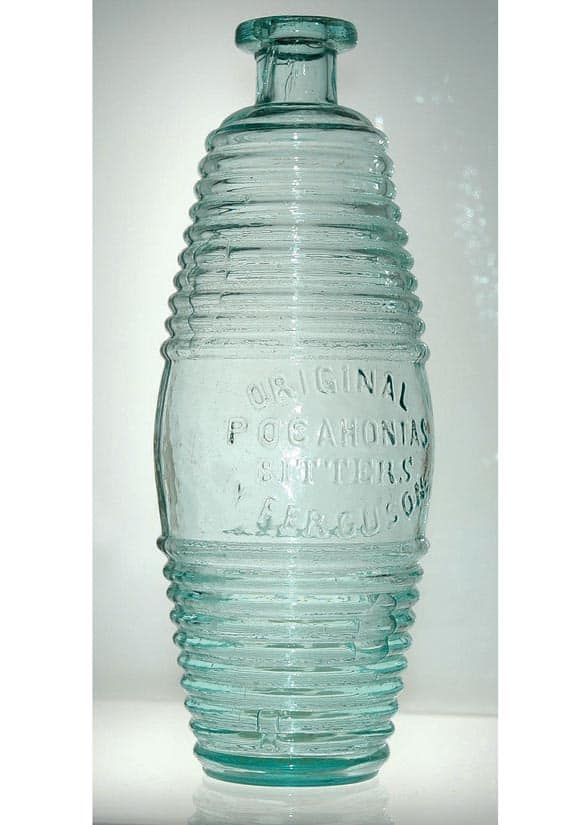 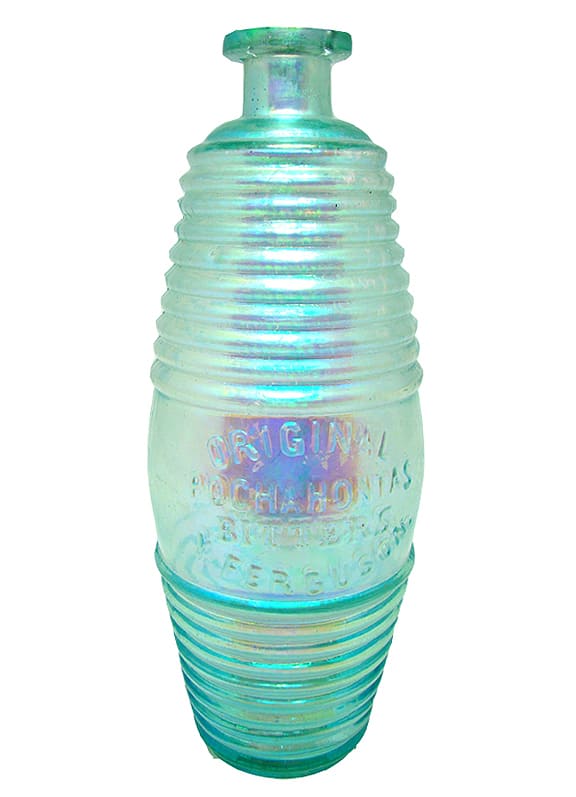 O 86.1 – The ORIGINAL POCAHONTAS BITTERS bottle (Y. FERGUSON) is a rare bitters that always appears as aqua. The one in this auction (est. 4,000-$8,000) is covered in a Benicia film and “any way you look at it, it’s a very gorgeous bottle,” said Wichmann. “We can say without any hesitation that this is the finest Benicia bottle we’ve ever offered.” It is graded a near-mint 9.9. – AmericanBottleAuctions.com 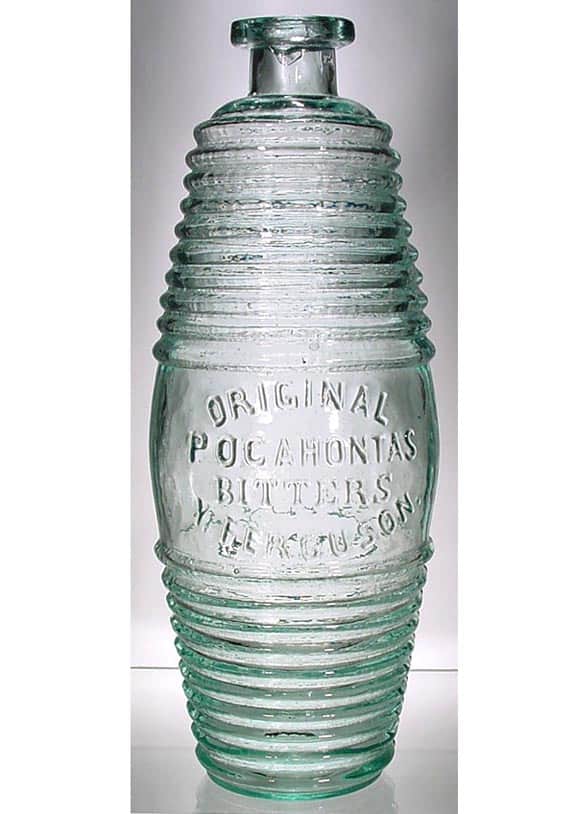 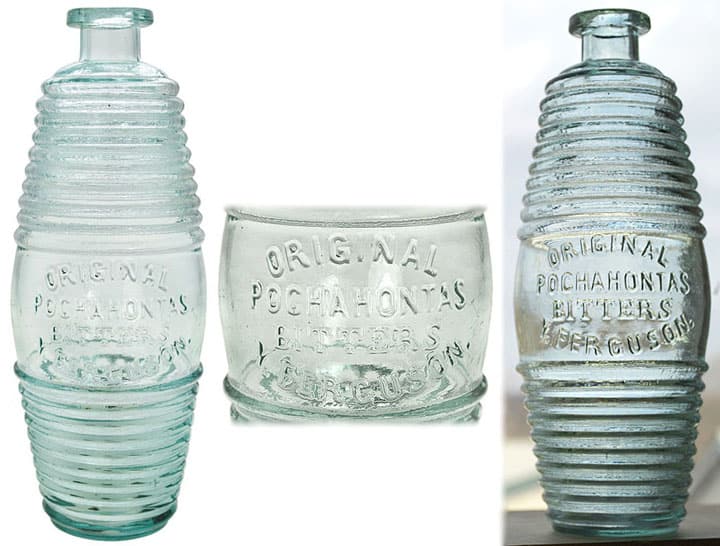 O 86.1 – “ORIGINAL / POCHAHONTAS / BITTERS / Y. FERGUSON.”, American, ca. 1865 – 1875, bluish aqua barrel, 9 1/4″h, smooth base, applied mouth, near perfect (a tiny pinhead size flake is off the underside edge of the lip). Sparkling pristine condition, wonderful impression, almost no trace of wear. A very desirable barrel bitters, and this one is about as good as it gets! – Glass Works Auction #103 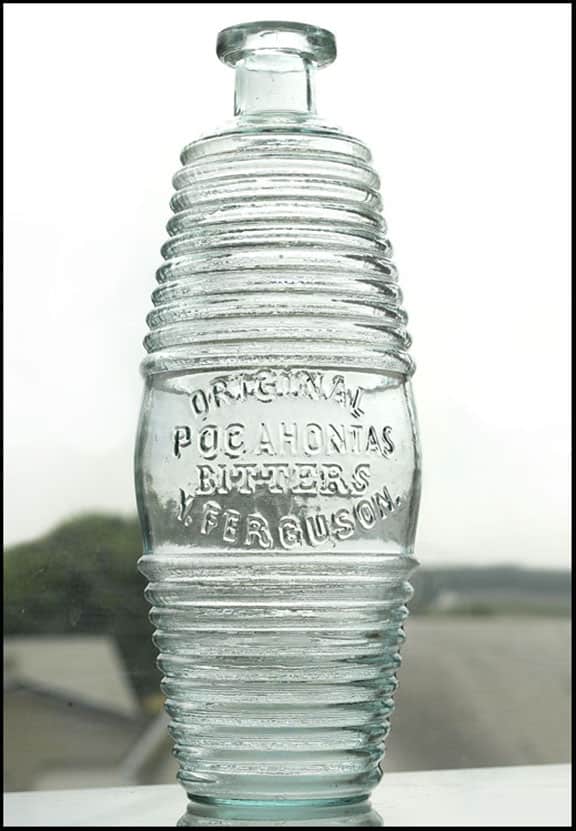