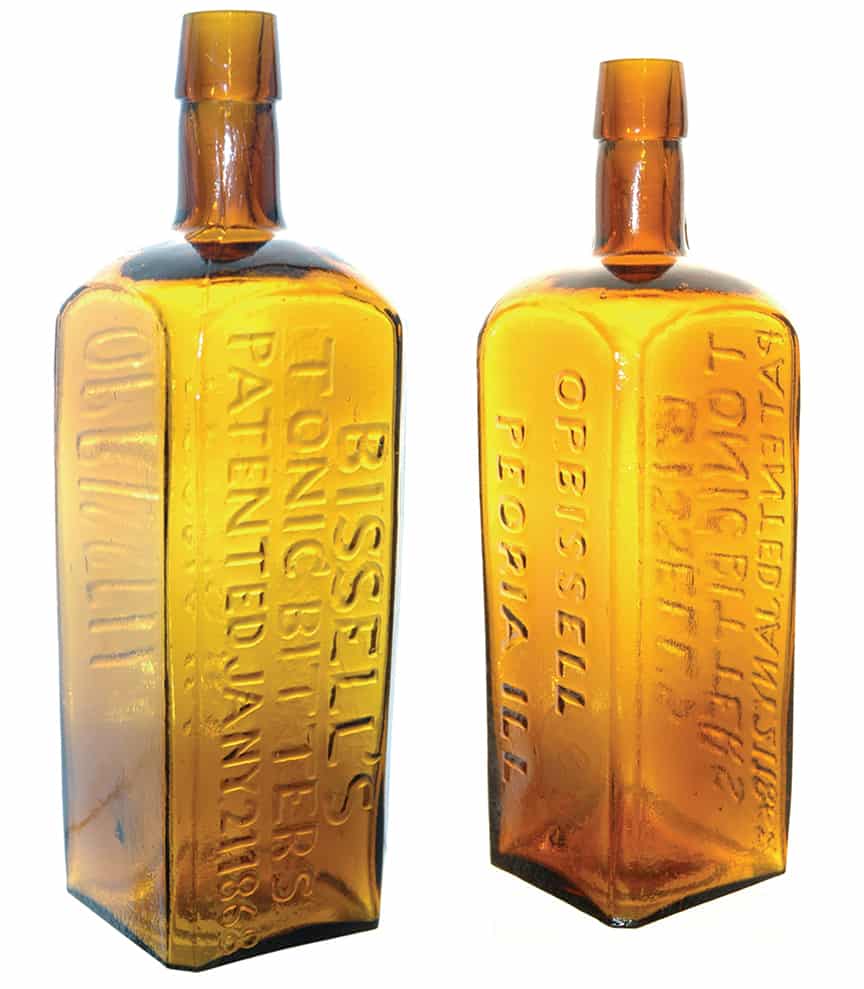 I thought I would post today on Bissell’s Tonic Bitters, a pretty cool bitters square from Peoria, Illinois. This brand should not get confused with Bissell’s Dandelion Bitters from Keene, New Hampshire.

I picked up my golden amber example from the Bottles and More Auction XVIII in August 2006. It is pictured at the top of the post. My labeled example is pictured below and was obtained at the Morro Bay Antique Bottle Show in March 2014. 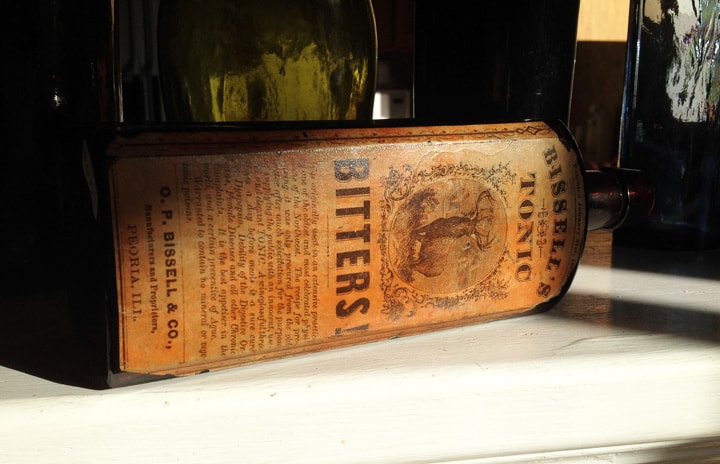 Here are the Carlyn Ring and W.C. Ham listings in Bitters Bottles: 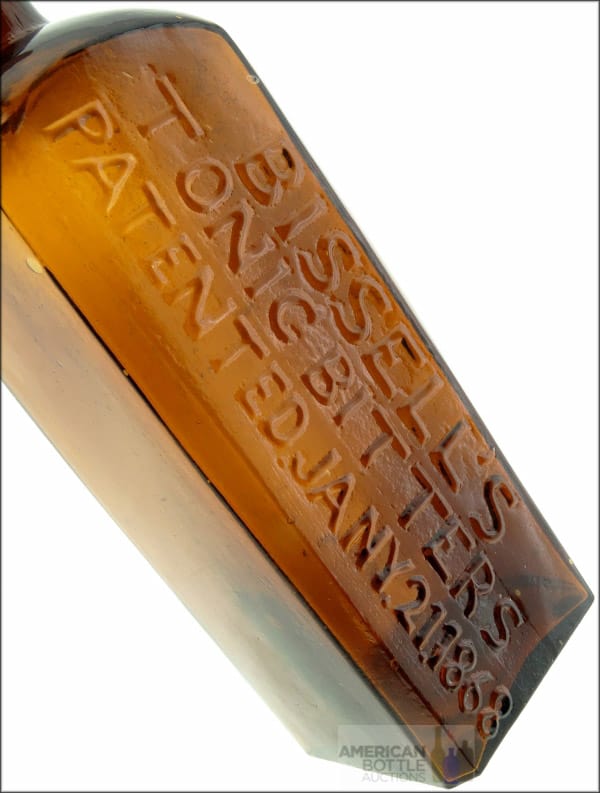 O. P. Bissell was born in March 1826, in Colebrook, Coos, New Hampshire. His father was Morgan Bissell. He married Mary Ann Reynolds on October 17, 1854 in Rhode Island. They would not have any children. Something pulled Bissell to Peoria, Illinois as the 1860 United States Federal Census lists him as a merchant. He must have been very successful as his Real Estate Value was listed as $40,000 and his Personal Estate Value at $100,000.

U.S. Civil War Draft Registrations Records show Bissell registering in 1863 and by 1865 he is listed as a Dry Goods Merchant selling Yankee Notions addressing at 17 S. Washington in  Peoria.

O.P would patent his Bissell’s Tonic Bitters on January 21, 1868 which is embossed on his bottles. Business would pick up with his patent medicines trade and his tonic bitters was the star. He would use an eye-catching illustration of a buck as his trademark. An 1872 Root’s Peoria City Directory sums it up pretty good with his listing reading, Orrin P. Bissell, wholesale dealer in notions, fancy goods, cigars and tobacco, sole proprietor and manufacturer of Bissell’s Tonic Bitters, 17 S. Washington and Commercial Place. These types of listings would continue up into 1891 or so though he would relocate to 412 Hamilton Street where he would have his office and laboratory.

OP was still manufacturing his bitters in 1892 when he died on October 29th of that year. 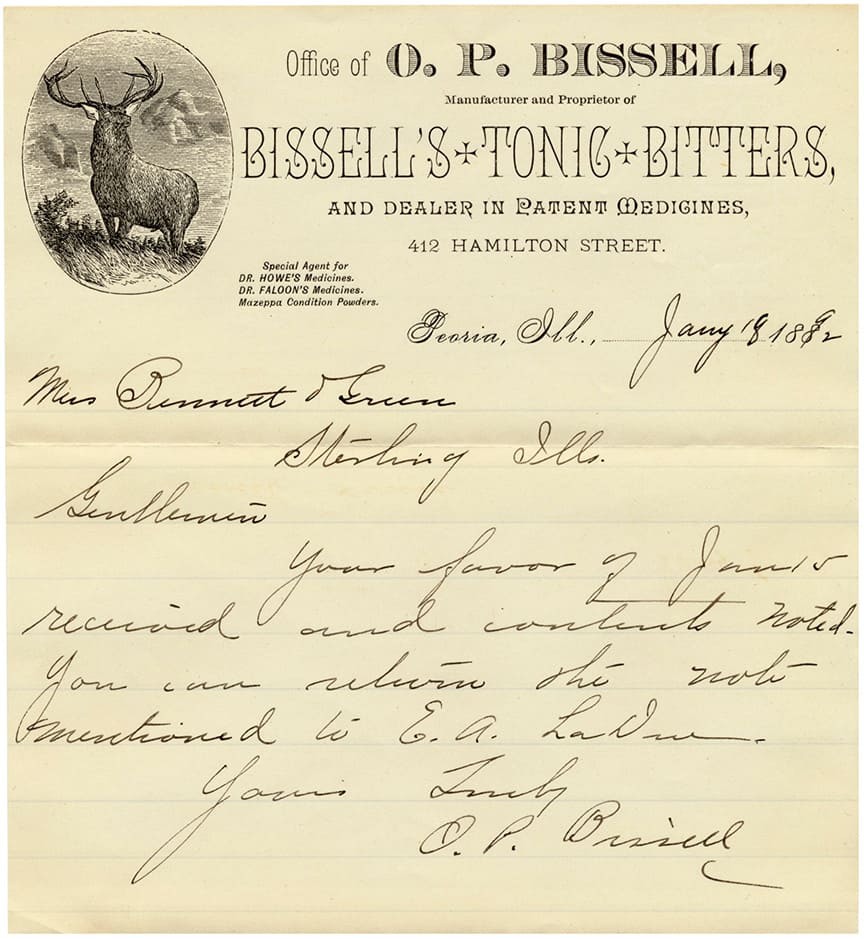 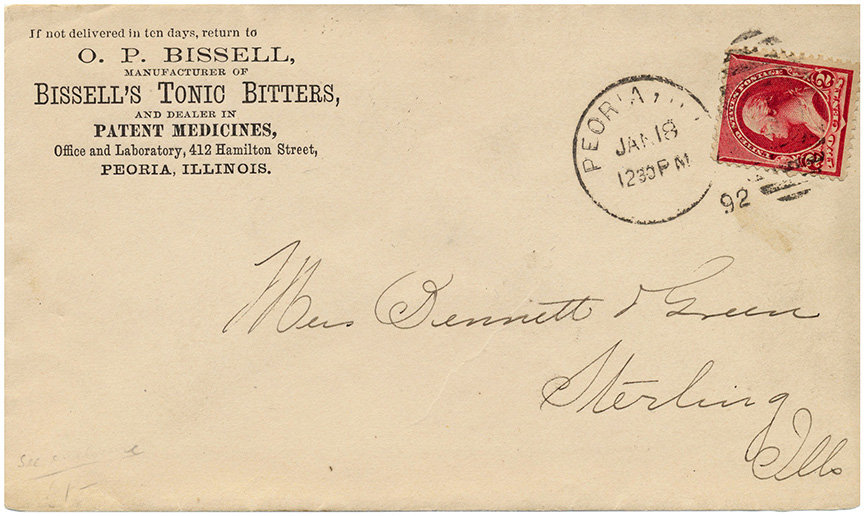 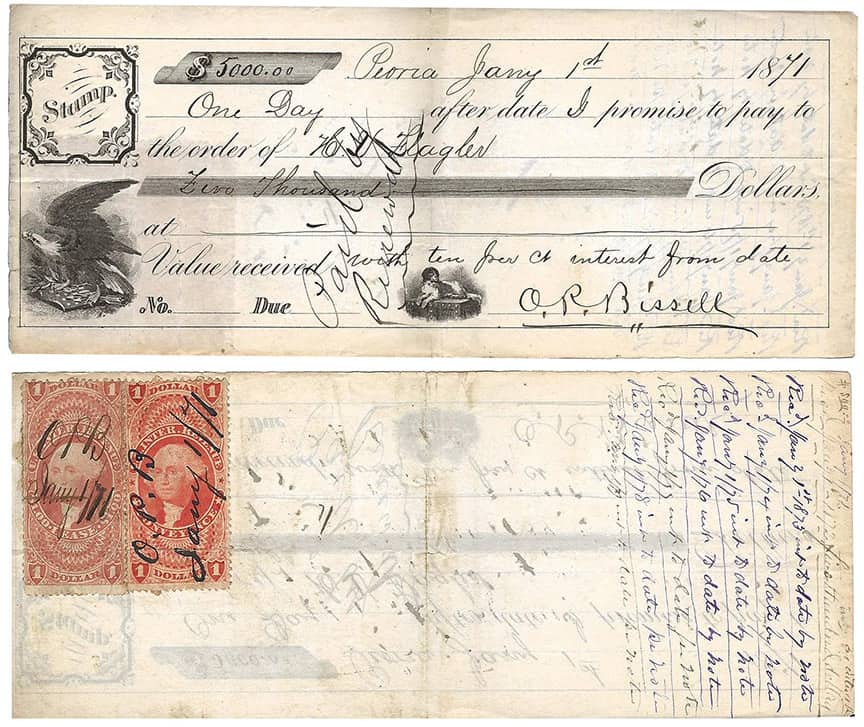 Orrin P. Bissell Loan. This is an 1871 note that outlines an agreement between Henry V. Flagler and Orrin P. Bissell. Mr. Bissell was to repay Mr. Flagler $5,000 plus interest. -PeoriaHistory.com 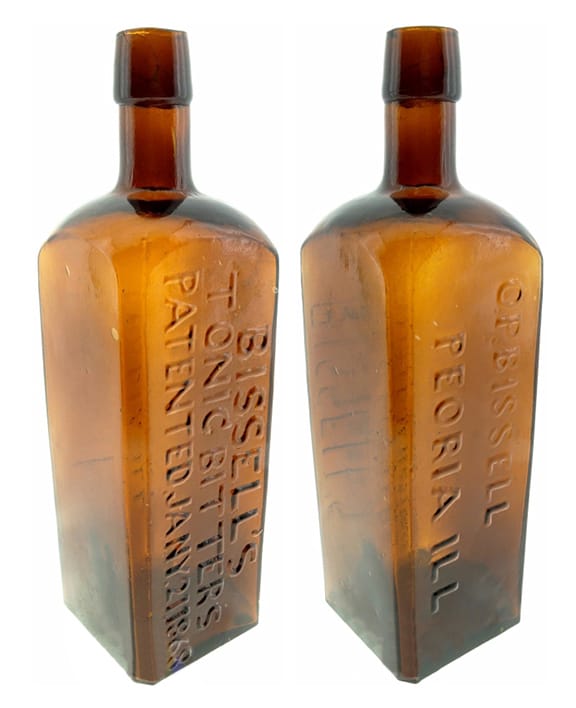 BISSELL’S TONIC BITTERS PATENTED .JANY.21.1868 / O.P. BISSELL PEORIA ILL. / L&W (on base). B-109, 9”, listed as “very rare.” According to Ring-Ham, the “& CO” has been peened out, and “TONIC BITTERS” is superimposed over a slug mark, which indicates possibly that a mold with interchangeable lettered panels was used to fashion this bitters. Grades 9.0. – American Bottle Auctions 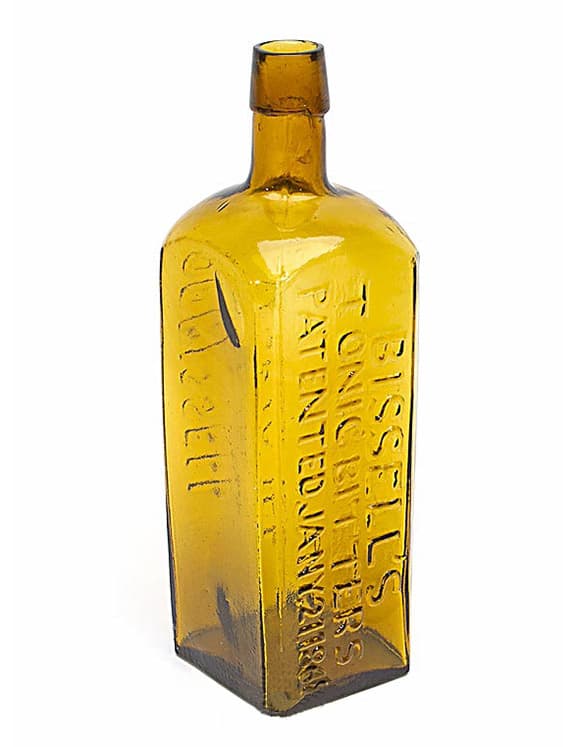 Ferdinand Meyer V is a native of Baltimore, Maryland and has a BFA in Fine Art and Graphic Design from the Kansas City Art Institute and School of Design. Ferdinand is the founding Principal of FMG Design, a nationally recognized design consultation firm. Ferdinand is a passionate collector of American historical glass specializing in bitters bottles, color runs and related classic figural bottles. He is married to Elizabeth Jane Meyer and lives in Houston, Texas with their daughter and three wonderful grandchildren. The Meyers are also very involved in Quarter Horses, antiques and early United States postage stamps. Ferdinand is the past 6-year President of the Federation of Historical Bottle Collectors and is one of the founding members of the FOHBC Virtual Museum.
View all posts by Ferdinand Meyer V →
This entry was posted in Bitters, Ephemera, History, Medicines & Cures, Tonics and tagged Ben Swanson, Bissell, Buck, dry goods, Hamilton, illinois, manufacture, Mary Ann Reynolds, Medicine, merchant, New Hampshire, notions, O. P., Orrin, Patent, Peoria, porter, Tonic. Bookmark the permalink.