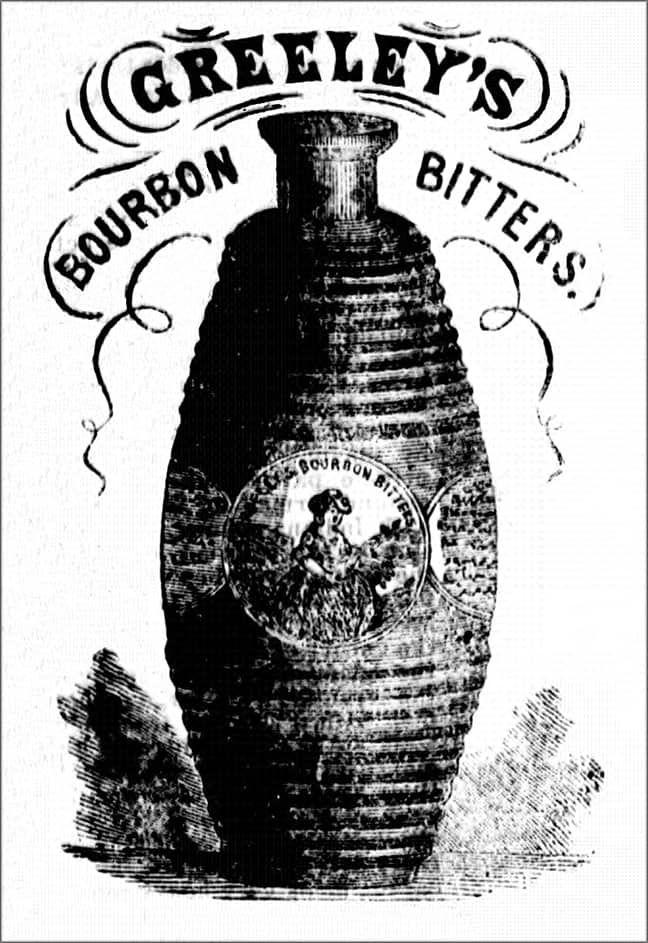 Wow, what a plug for Greeley’s. While many bitters used an abundance of adjectives describing exotic roots and herbs to embellish the mysterious medicinal healing qualities of the product, it seems that the W.F. and A.W. Greeley of Greeley’s Bourbon Bitters and Greeley’s Bourbon Whiskey Bitters decided to pull no punches with the product name and advertising (see advertisement further below). 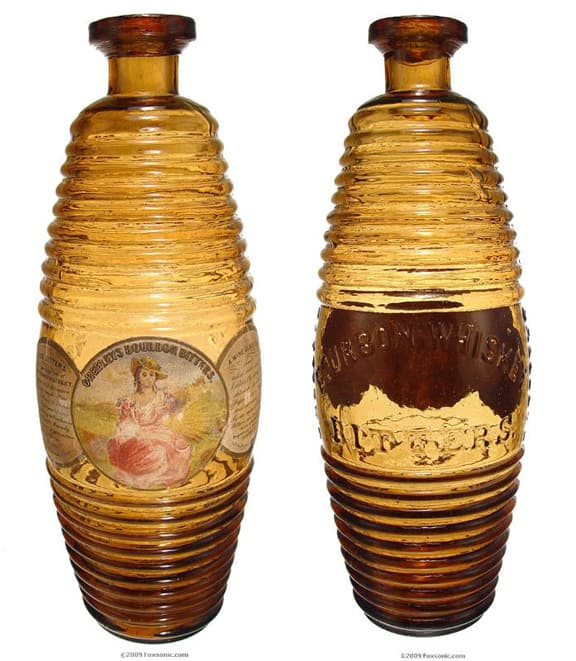 The Carlyn Ring and W.C. Ham listing in Bitters Bottles is as follows::

[PRG] *note that the San Francisco advertisement for Greeley’s Bourbon Bitters (pictured) is dated 1861. It would be safe to assume that this product was made in 1860 and possibly earlier. Look at the example pictured that is double pontiled. This really raises an eyebrow. 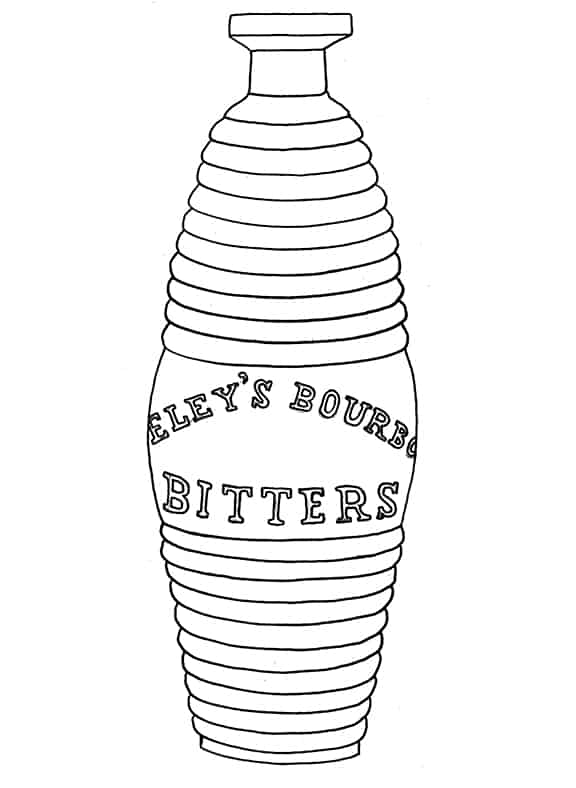 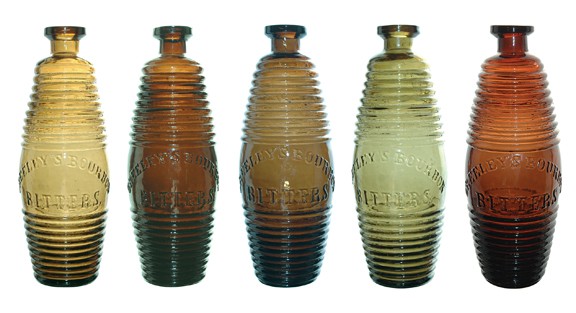 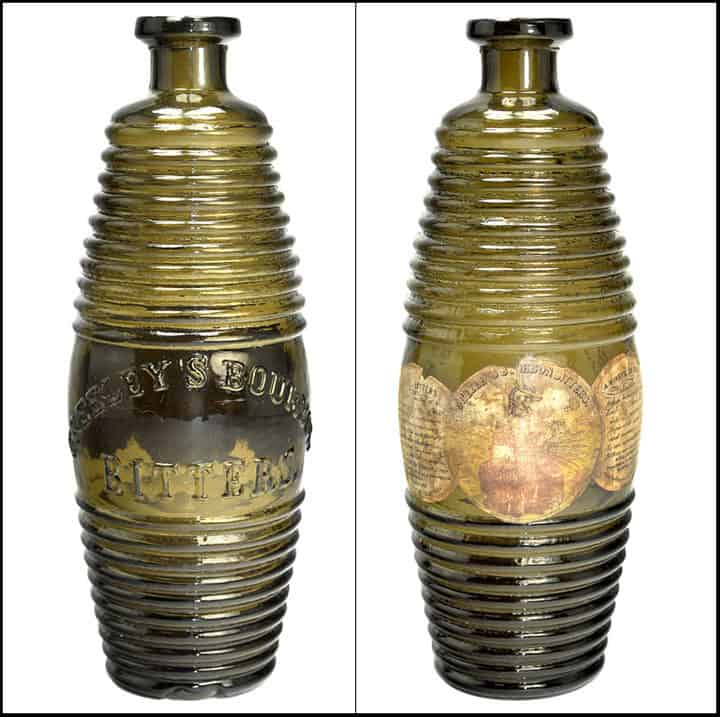 “GREELEY’S BOURBON / BITTERS”, (Ring/Ham G-101), Massachusetts, ca. 1865 – 1875, medium smoky olive with topaz tone barrel, 9 1/4”h, smooth base, applied mouth, 97% original label. Pristine condition. One of the only ‘green’ Greeley’s to have an original label. As an extra added attraction a sizable piece of glass from another bottle that probably remained in the mold from the prior blow is adhered to the side of the base. Purchased from Cobweb Bottles in 1971. – Glass Works Auctions #112 – Bob Ferraro Collection – Session 1 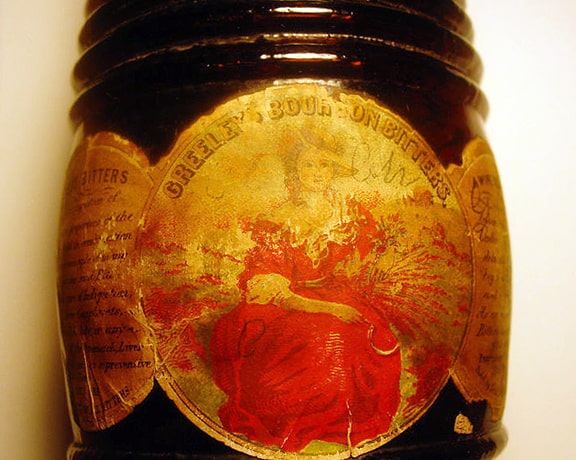 Left Circle: These bitters prepared of pure old Bourbon Whiskey and possess all its stimulating tonic and medicinal power. Modified and improved in its action on the system by the addition of many simple alternative and bitter tonics making them invaluable. A remedy in the treatment of lung complaints, bronchitis, dyspepsia, liver complaints and general debility and weakness of the system.

Right Circle: A wine glassful should be taken before each meal. Ladies and children should begin with less quantity and increase. As an agreeable stomachic these bitters are unsurpassed. 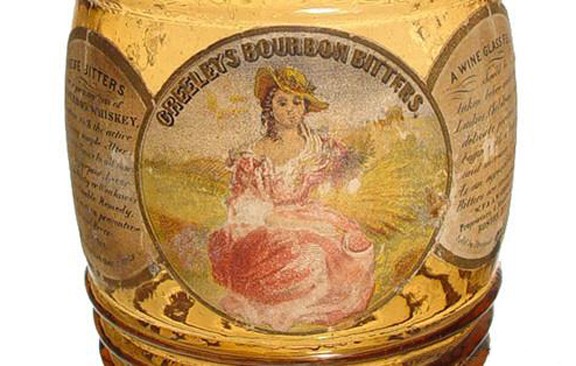 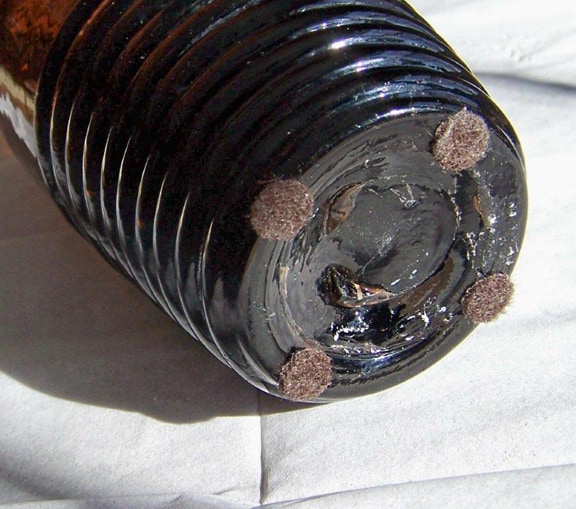 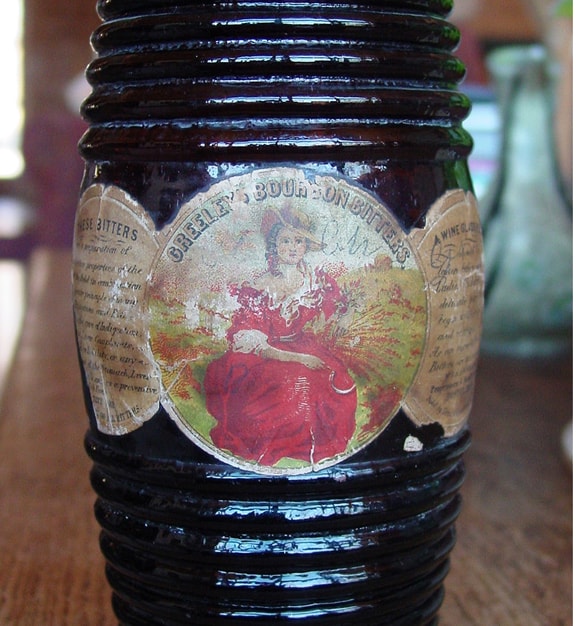 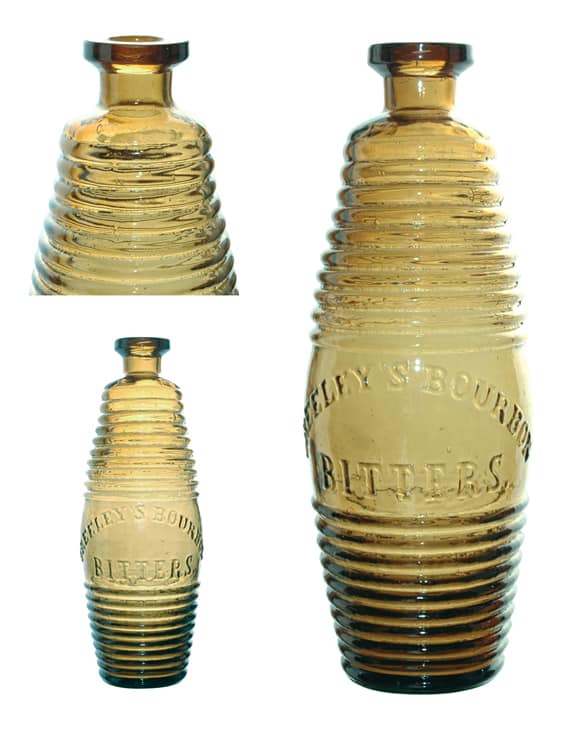 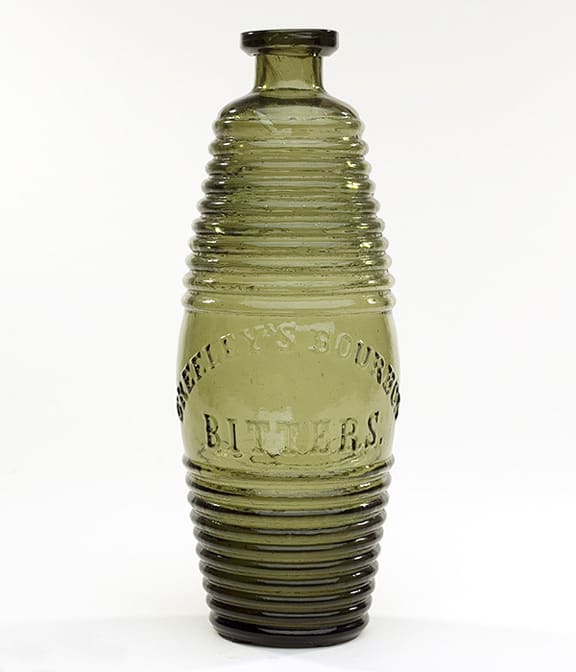 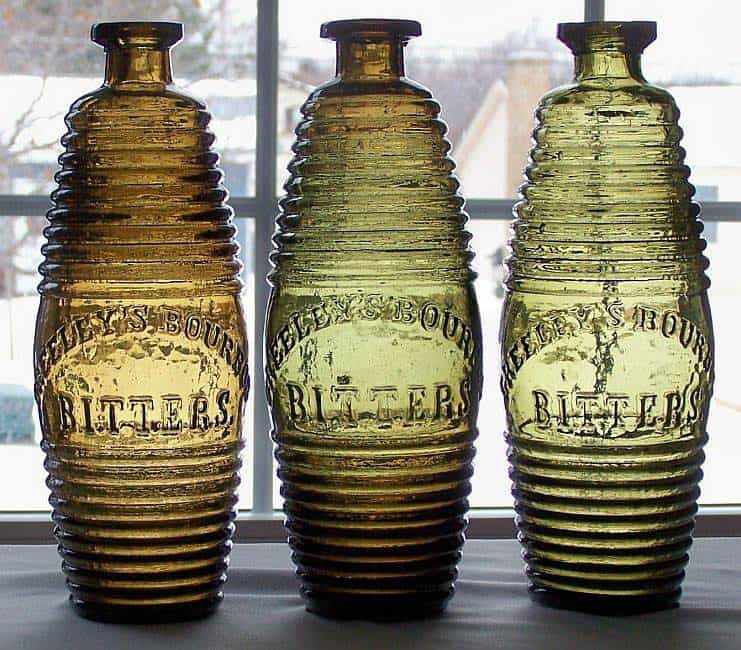 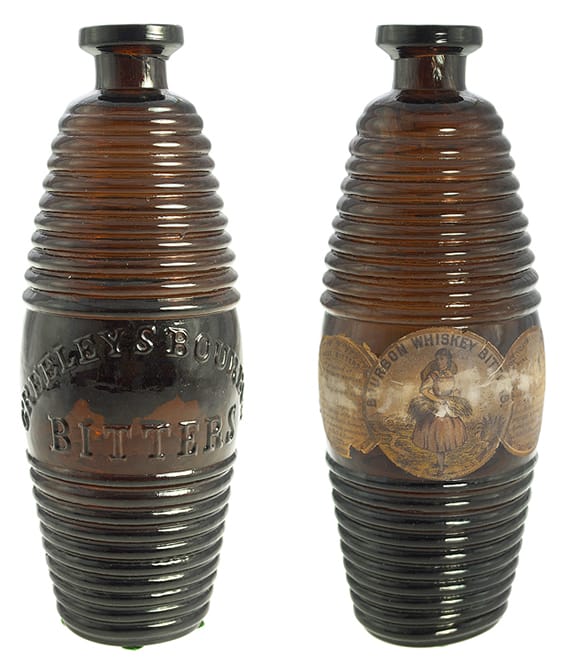 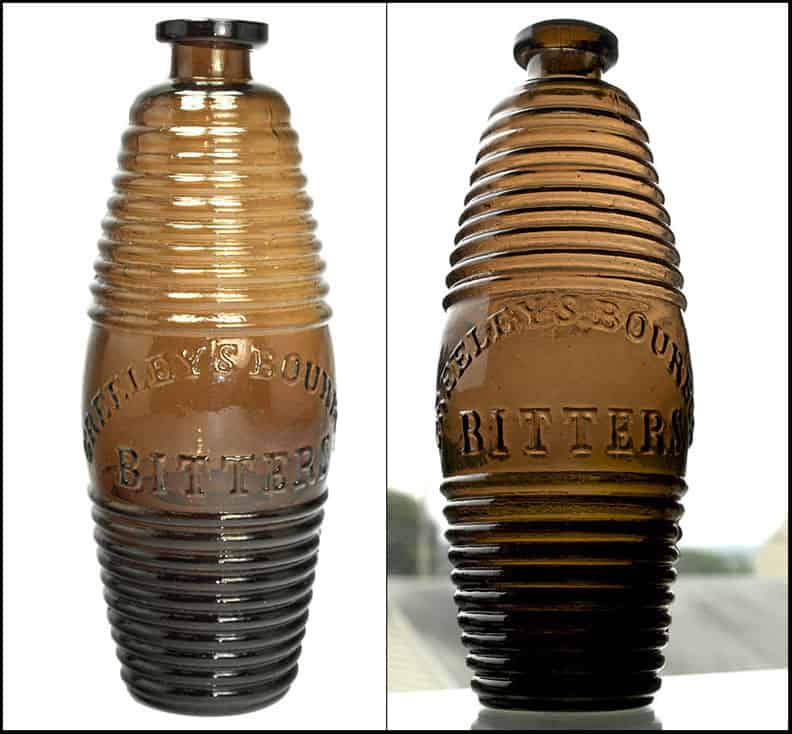 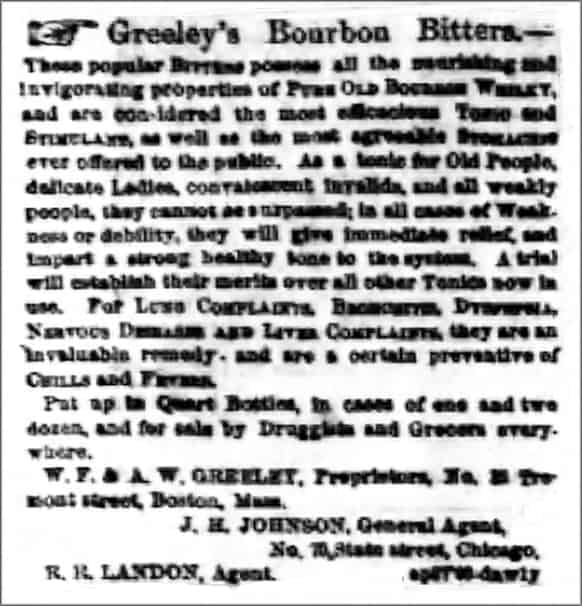 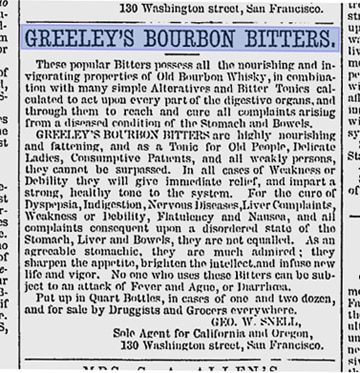 Ferdinand Meyer V is a native of Baltimore, Maryland and has a BFA in Fine Art and Graphic Design from the Kansas City Art Institute and School of Design. Ferdinand is the founding Principal of FMG Design, a nationally recognized design consultation firm. Ferdinand is a passionate collector of American historical glass specializing in bitters bottles, color runs and related classic figural bottles. He is married to Elizabeth Jane Meyer and lives in Houston, Texas with their daughter and three wonderful grandchildren. The Meyers are also very involved in Quarter Horses, antiques and early United States postage stamps. Ferdinand is the past 6-year President of the Federation of Historical Bottle Collectors and is one of the founding members of the FOHBC Virtual Museum.
View all posts by Ferdinand Meyer V →
This entry was posted in Bitters, Bourbon, Collectors & Collections, Color Runs, Figural Bottles and tagged A.W. Greeley, Barrel, bitters, Boston, Greeley's Bourbon Bitters, Meyer Collection, Stecher, W.F. Greeley, whisky. Bookmark the permalink.