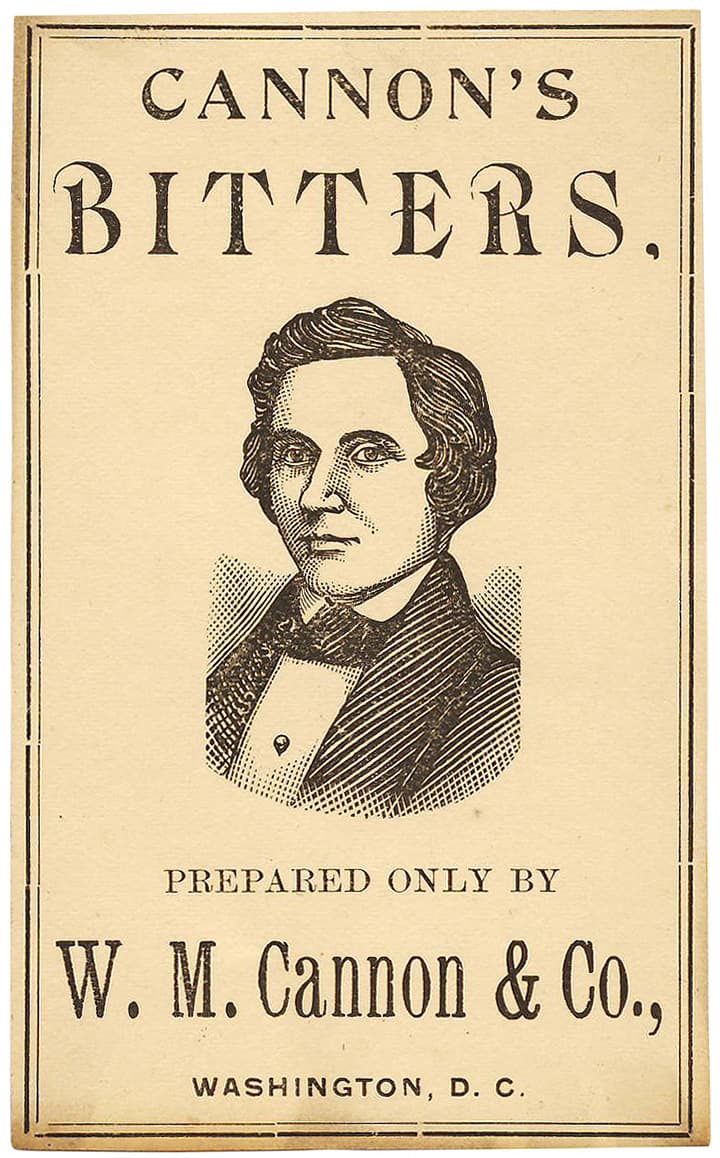 So, for now, the new listing in Bitters Bottles Supplement 3 is as follows:

C 33 Cannon Bitters (Presumed Name)
Embossed Square with Cannons and Cannonballs
10 x 2 7/8 (6 ¼) ½
There is no embossed copy on this bottle. Square with embossed cannons on three faces in opposite horizontal alignment, vertically stacked cannonballs on two opposite corners, vertical cannon ramrod tool on opposite corners, crossed swords on all four top shoulder panels and pyramid fort with the flag above flat area for a label.
Amber, LTC, Applied mouth, Extremely rare
Presumed to be related to Cannon’s Dyspeptic Bitters but not authenticated. No labeled example exists or advertising to confirm the relationship.
See C 33 in Bitters Bottles, sC 33, s2C 33, s2p51 and s2p290 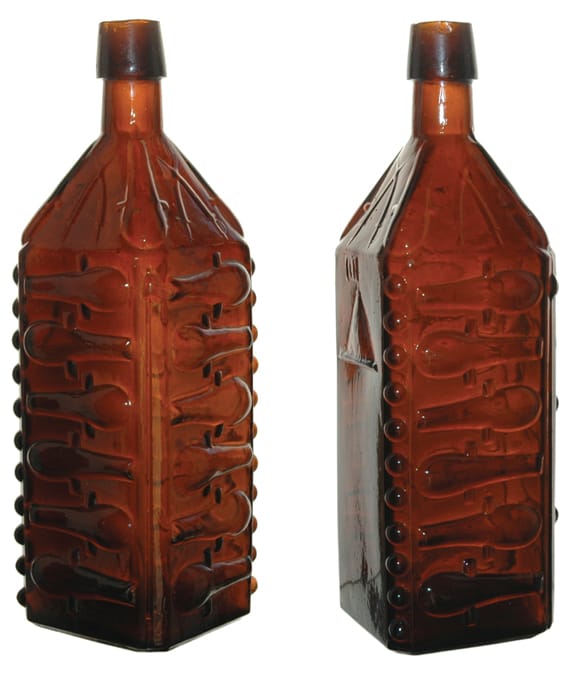 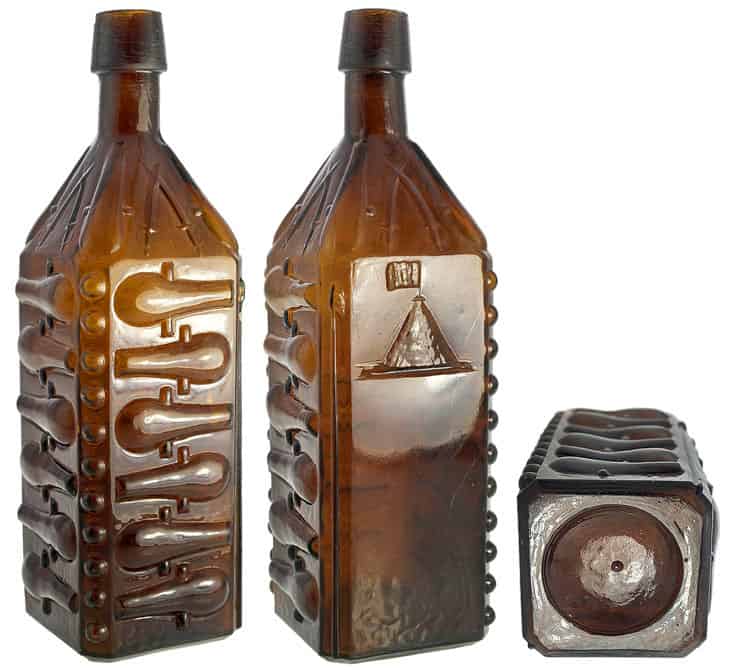 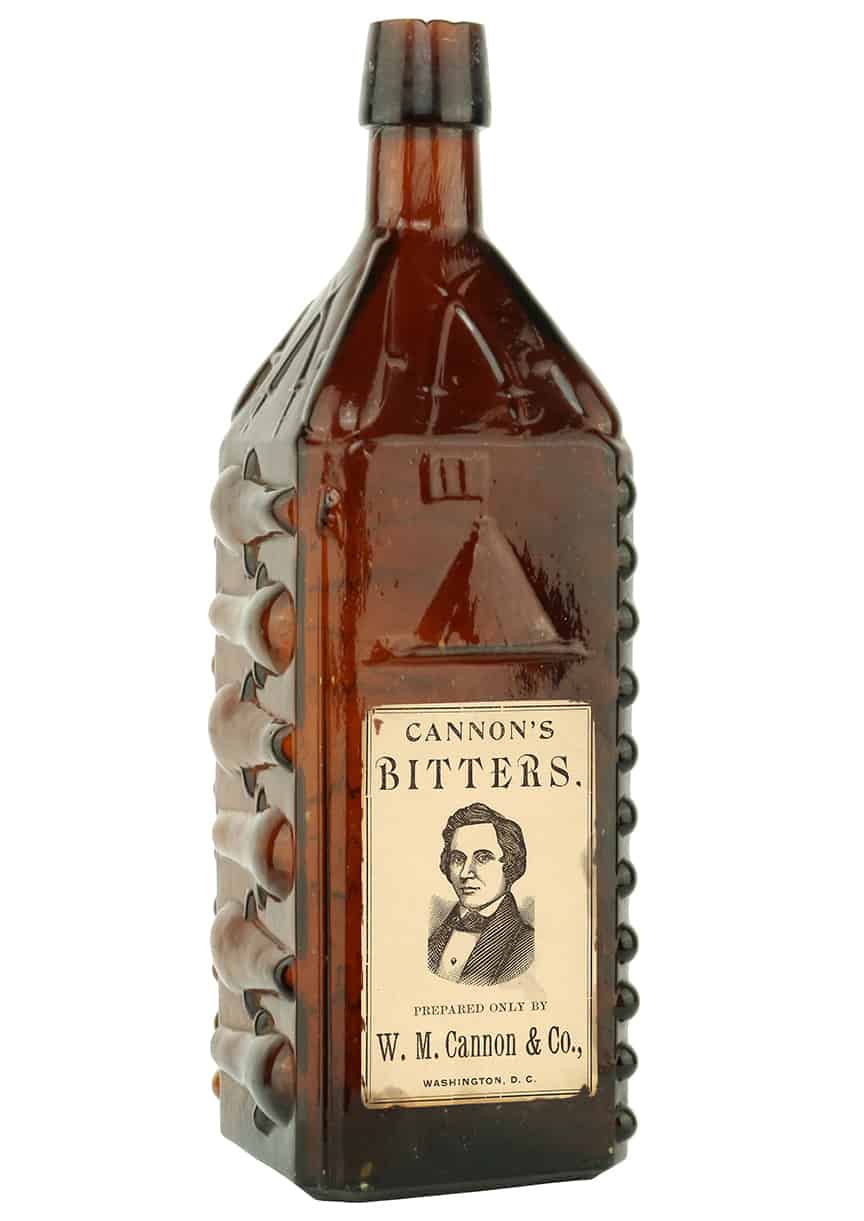 I couldn’t help but try to label the embossed cannon bottle with the W. M. Cannon & Co., Cannon’s Bitters label. That would be too easy! A true labeled example will turn up one day or another. 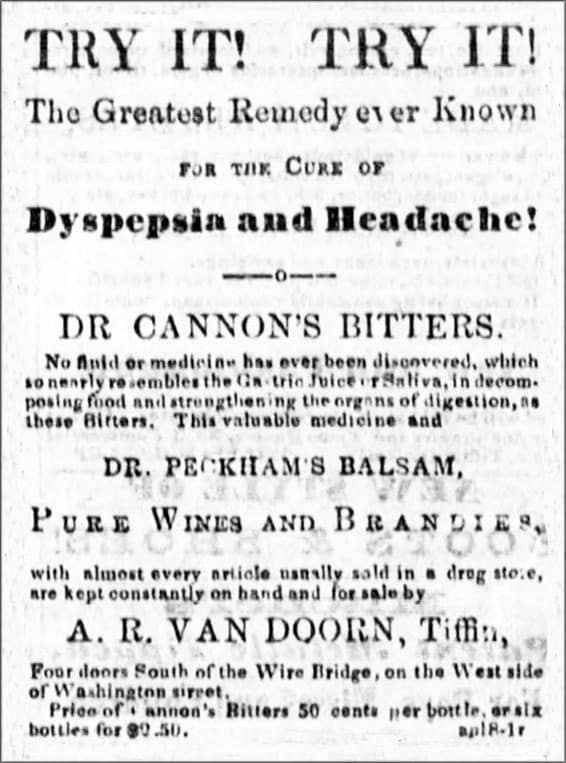 The Dr. Cannon’s Bitters is a new find on 14 September 2020. The new listing in Bitters Bottles Supplement 3.

Newspaper Advertisement
C 33.1 CANNON’S BITTERS, DR., Try It! Try It! The Greatest Remedy ever Known for the Cure of Dyspepsia and Headache, Price of Cannon’s Bitters 50 cents per bottle, or six for $2.50. A.R. Van Doorn, Tiffin, The Tiffin Tribune (Tiffin, Ohio) August 19, 1859. Advertised locally for one year only. 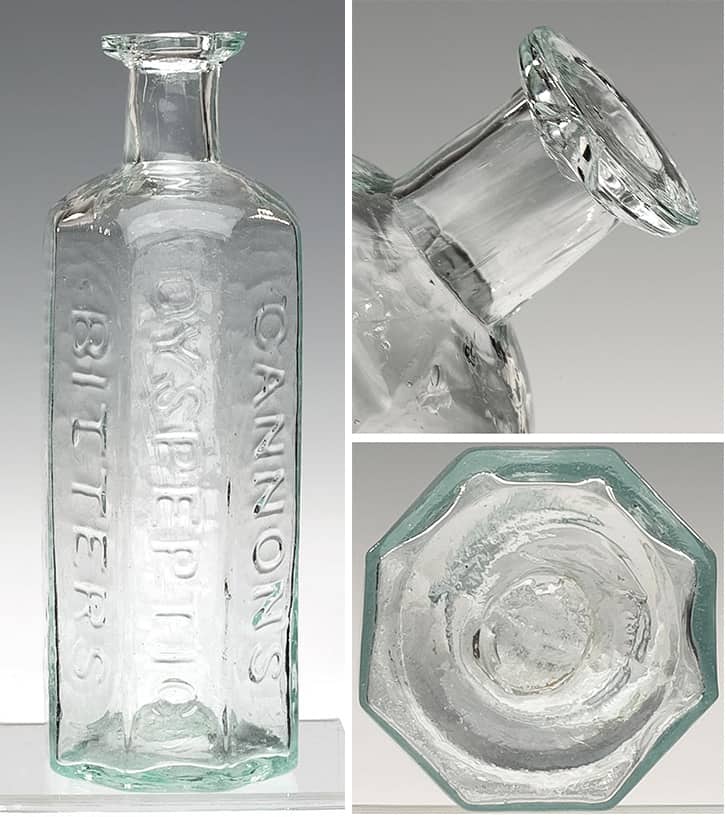 “CANNON’S – DYSPEPTIC – BITTERS“, America, 1850 – 1860. Aquamarine, octagonal, applied square collar – blowpipe pontil scar, ht. 6″; (professionally cleaned to original luster; a ½” chip from the edge, and underside, of the square collar). An exciting fresh discovery and previously unknown mold, almost certainly from the W. M. Cannon Medicine Co, Washington, D.C. Believed to be the first intact pontiled example known from this company. Note; the chip is on the side of the lip, and could easily be repaired, if desired.

This is most likely Cannon’s Dyspeptic Bitters, or Cannon’s Compound Vegetable or Blood Purifying Bitters sold only by T. W. Dyott & Sons, Philadelphia as noted below in The Charleston Mercury (Charleston, South Carolina) December 3, 1850. Wm. M. Cannon in Washington, D.C. may have taken over this brand in 1853 or so as the Dyott ads stop that year and Cannon’s Bitters or Cannon’s Vegetable or Blood-Purifying Bitters, Wm. M. Cannon ads start showing up in Washington, D.C. newspapers. See C 33.3 and and s3C 33.8 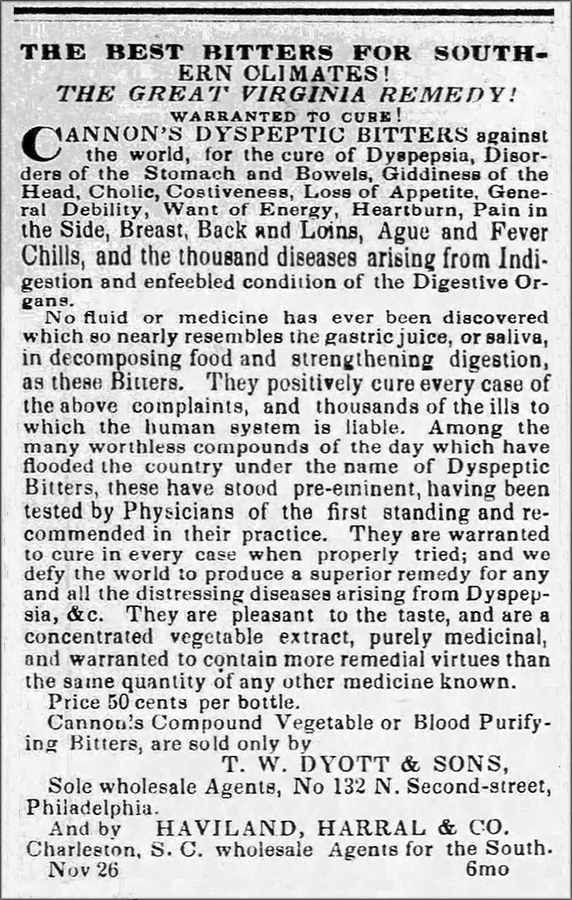 Note: There are also Cannon’s Vegetable Bitters (or Cannon’s Bitters) ads that start appearing in Charles Town, West Virginia in 1855, and Alexandria, Virginia in 1858. This is probably Wm. M. Cannon’s bitters noted below. 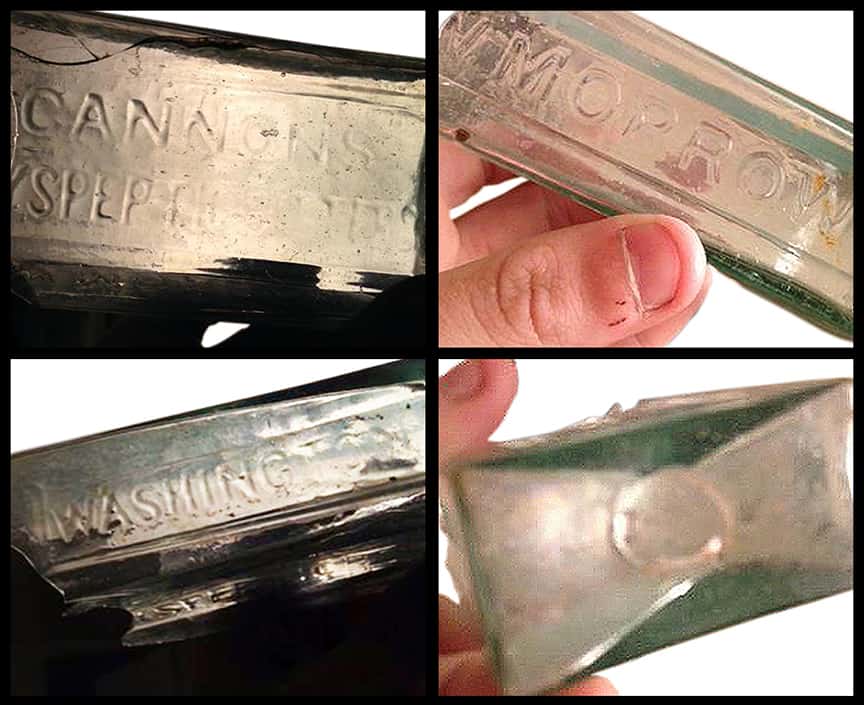 This was an incredible find that merited future investigation. The new listing in Bitters Bottles Supplement 3 is:

Surprisingly, I can not find any listings of a W. Morrow listed in Washington D.C. There are a few hints but nothing definite. I am now thinking that the bottle sides read, “W. Morrow Cannon’s Dyspeptic Bitters. So the name might be William M. Cannon or William Morrow Cannon.

Ephemera collector Ben Swanson possesses the following broadside for Cannon’s Indian  Vegetable Bitters. The new listing in Bitters Bottles Supplement 2. It is important to note that it says the bitters have been manufactured since 1842. 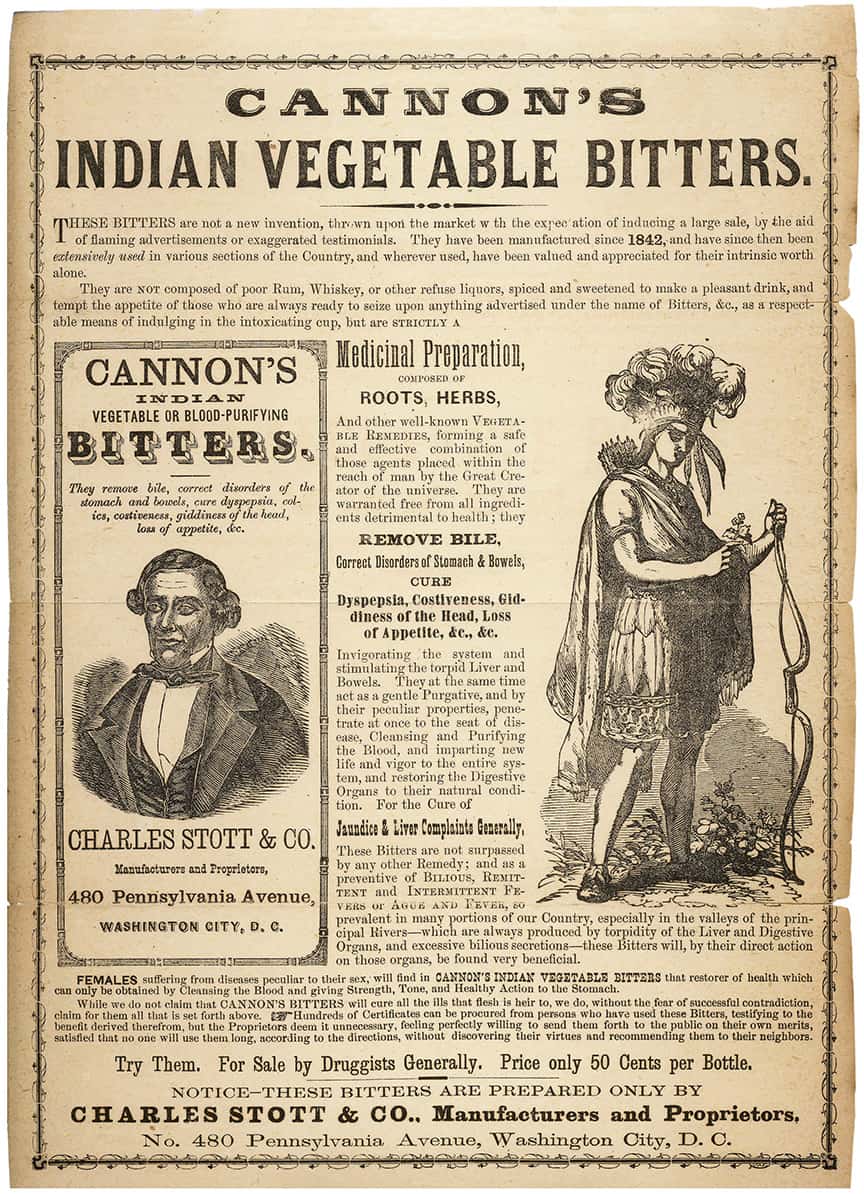 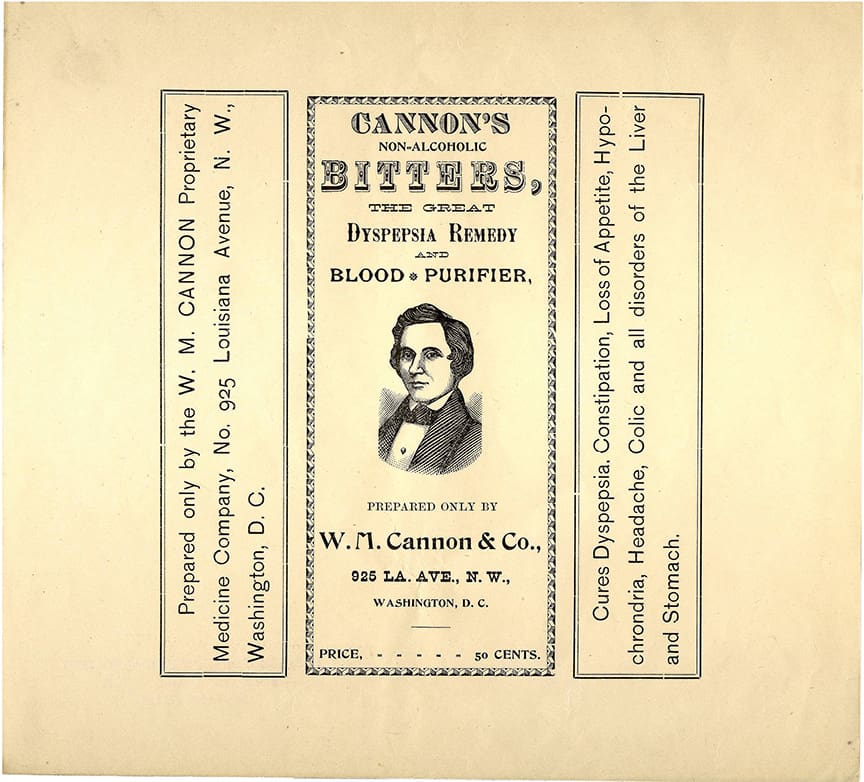 This packaging piece for Cannon’s Bitters is interesting for a number of reasons. Notice that it does not say Cannon’s Dyspeptic Bitters but rather Cannon’s Bitters or Cannon’s Non-Alcoholic Bitters. It has been seen by many and assumed to be related to the embossed “cannon” bottle which is doubtful. The example is from the Ben Swanson collection.

[right side] Cures Dyspepsia, Constipation, Loss of Appetite, Hypochrondria, Headache, Colic and all disorders of the Liver and Stomach

The revised listing in Bitters Bottles Supplement 3 is as follows:

We suspect this piece is for Cannon’s Dyspeptic Bitters (c 33.3) which is a rectangular bottle.

We also know that William M. Cannon was advertising his Cannon’s Vegetable or Blood Purifying Bitters in 1854. “Ask for the bottle with the Portrait of the Inventor & Proprietor, and take none other, Wm. M. Cannon, Washington, D.C.”

Missouri Avenue Property  Before the year 1840 some of the Missouri avenue lots had passed to R.G. Briscoe, P.W. Browning, B.F. Middleton, J.B. Yates, Charles Stott, William Bird, W.T. Duvall, A. Shepherd and Dr. MacWilliams, with others, and on the 3d street front David A. Hall invested. The majority of the property was improved.

In the forties on the avenue and 4-1/2 street were Peetsch’s tavern, Mrs. Holdsworth’s, F. Cudlip’s, Mrs. Reiley’s, Mrs. Potter’s, Mrs. Polkinhorn’s and Mrs. Scott’s boarding houses; F.S. Naylor, tin and sheet iron worker; William Cannon, painter; C. Dunlap and A. Causland, barbers; Lee & Espey, cabinetmakers and undertakers; William H. Faulkner, shirt-maker; J.W. Smith, tailor; M. McDermott, coach-maker; Semmes & Son, grocers; Richard Thompson; N. Adams, second-hand clothing. On 3d street was R. Patterson, blacksmith. On Missouri avenue were Mrs. Lunts’ boarding house at 3d street; R.G. Briscoe, P.W. Browning, H.S. Clarke, W.G. Snithen, W.T. Duvall, Mrs. Jeffers and Mrs. M.E. Morgan’s boarding house. In the fifties B. Shadd located on 3d street and opened a tavern at the corner of the avenue. Mr. Faulkner is remembered for having been the pioneer shirt manufacturer in these parts, having many employes and was among the first to demonstrate the labor-saving advantages of the sewing machine, which was at this period just coming into use. “Thompson Life Preserver,” a patent medicine, made by Mr. Richard Thompson, was the wonderful “cure-all” of the Washington people of that day, and the proprietor was quite successful with it, as the medicine was credited by some with benefit to many complaints. From William Cannon, a neighboring painter, came “Cannon’s Bitters,” which for years was the favorite tonic for many families. 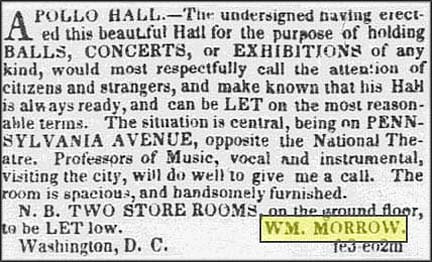 1854: Newspaper advertisement (below) Cannon’s Vegetable or Blood Purifying Bitters, Ask for the bottle with the Portrait of the Inventor & Proprietor, and take none other, WM. M. Cannon, Washington, D.C. – Evening Star, Saturday, June 10, 1854 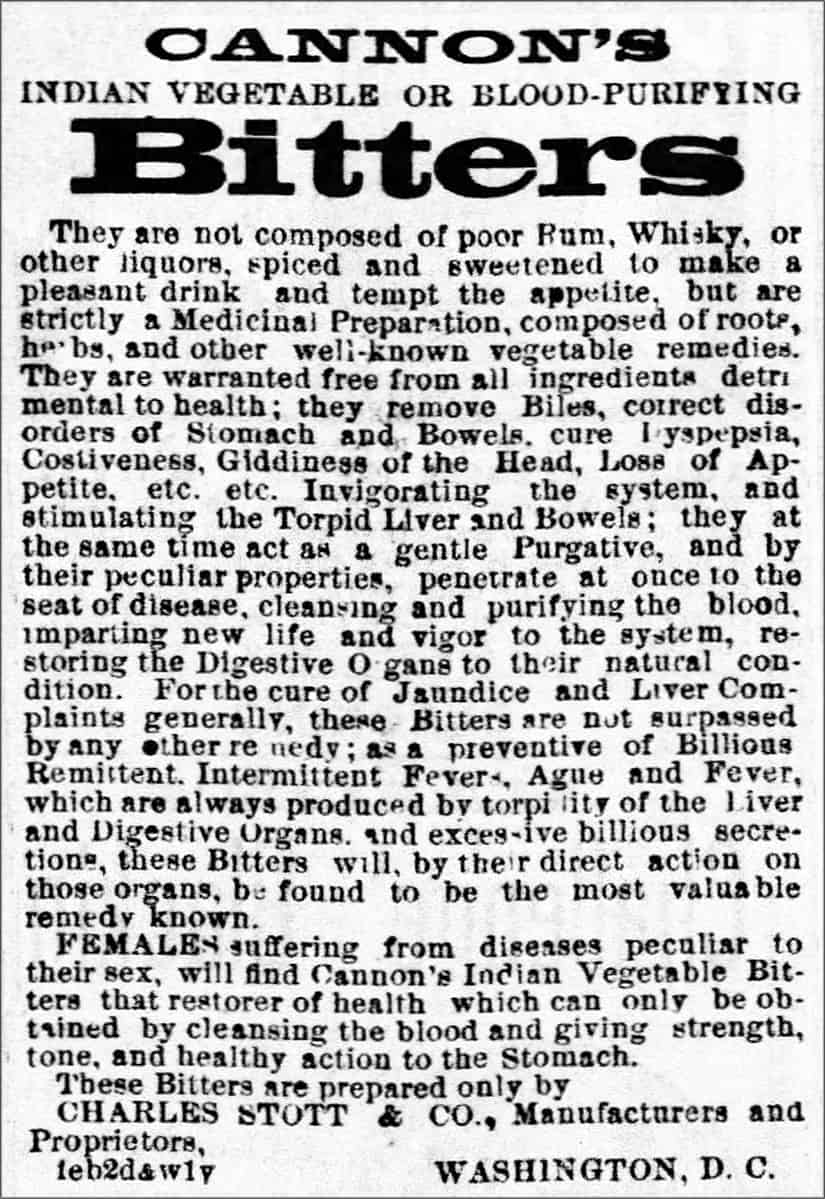 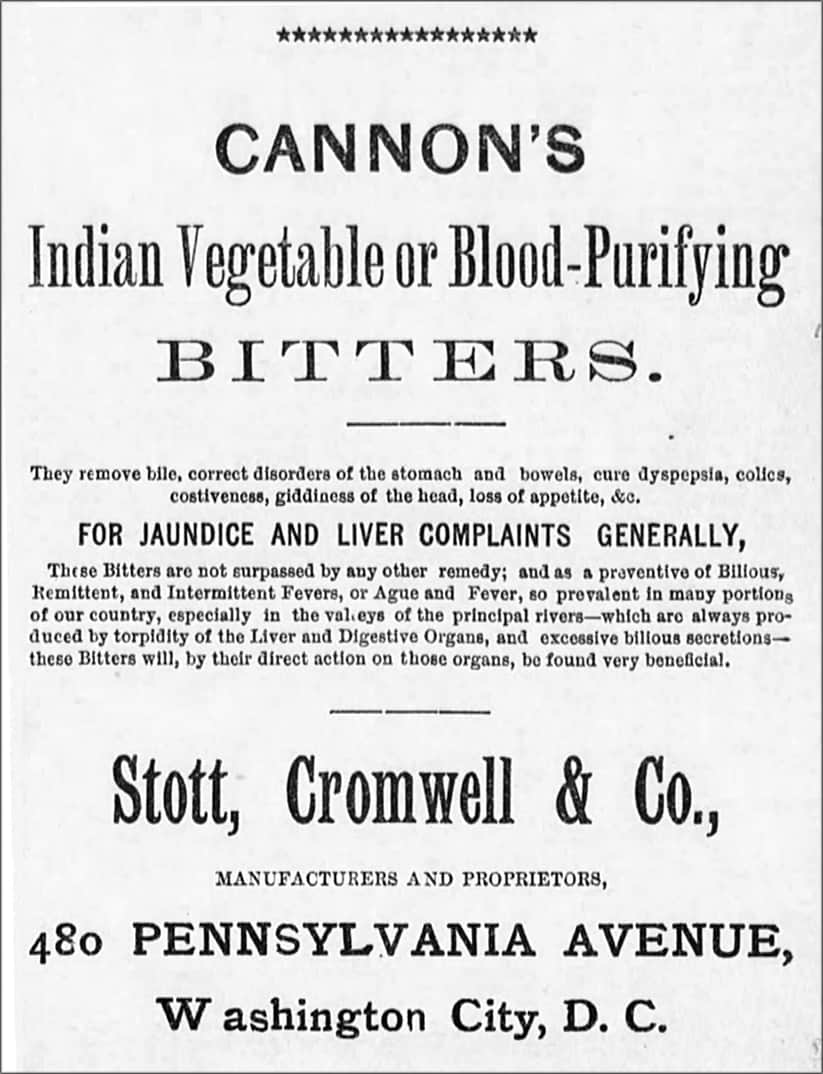