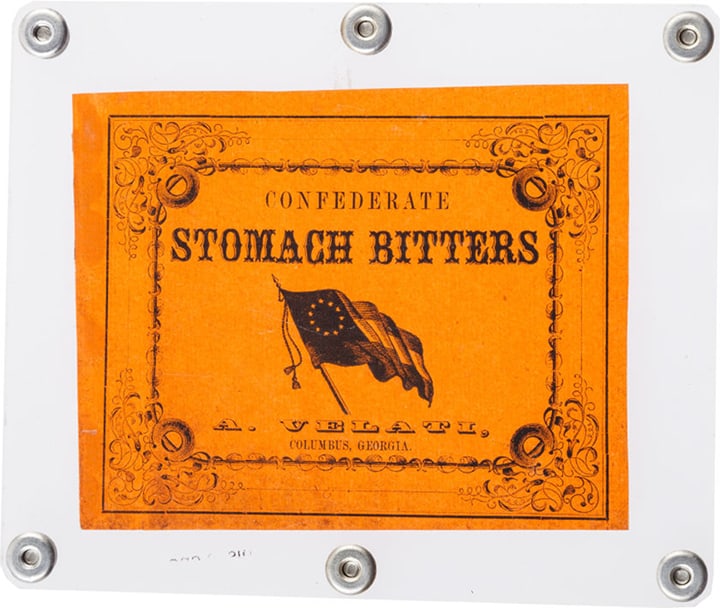 There is an interesting bitters label that is presently making an appearance at Heritage Auctions. Thanks to Lou Holis for the tip. The label reads, “Confederate Stomach Bitters” with a Confederate flag. Beneath the flag is “A. Velati, Columbus, Georgia.” If you google Confederate Stomach Bitters, you pull up the following quote from Treasure Depot. I believe this is in reference to another later labeled bitters from New Orleans.

Here’s one I just got that came out of the wall of a old house. I have never seen this before it was no doubt used only here in the South. It may have a UK orgin by the “LTD” after the makers name and then sold in New Orleans. Has anyone every seen this one before.? It is still covered in the fine coating that wall/attic dust will give a bottle over 100 years. I am guessing it is somewhere in the 1880’s or so era.

Angelo Velati was born in Italy around 1819 and sold cigars in Columbus, Georgia later in life. He probably sold a bitters too. Velati is a tough fellow to track down but I do see that he was a Confederate soldier during the Civil War enlisting as a Private in Everitt’s Company, Georgia 5th Infantry Regiment and was also a member of Chapman’s Company, Georgia Infantry aka, the Georgia Defenders. In 1864 he petitioned to be removed from being sent to the front. The letter below says he was invaluable in providing vegetables to Walker Hospital in Columbus. He also had Rheumatism which was also a contributing factor in him not fighting on the front lines. The letter below is quite interesting.

I have a problem with this label. Why can’t I find a listing confirming the brand? Bright orange paper? Obviously recreated, at least in my mind. So what goes? Oh, and there is no listing in Ring & Ham. Hmmm. 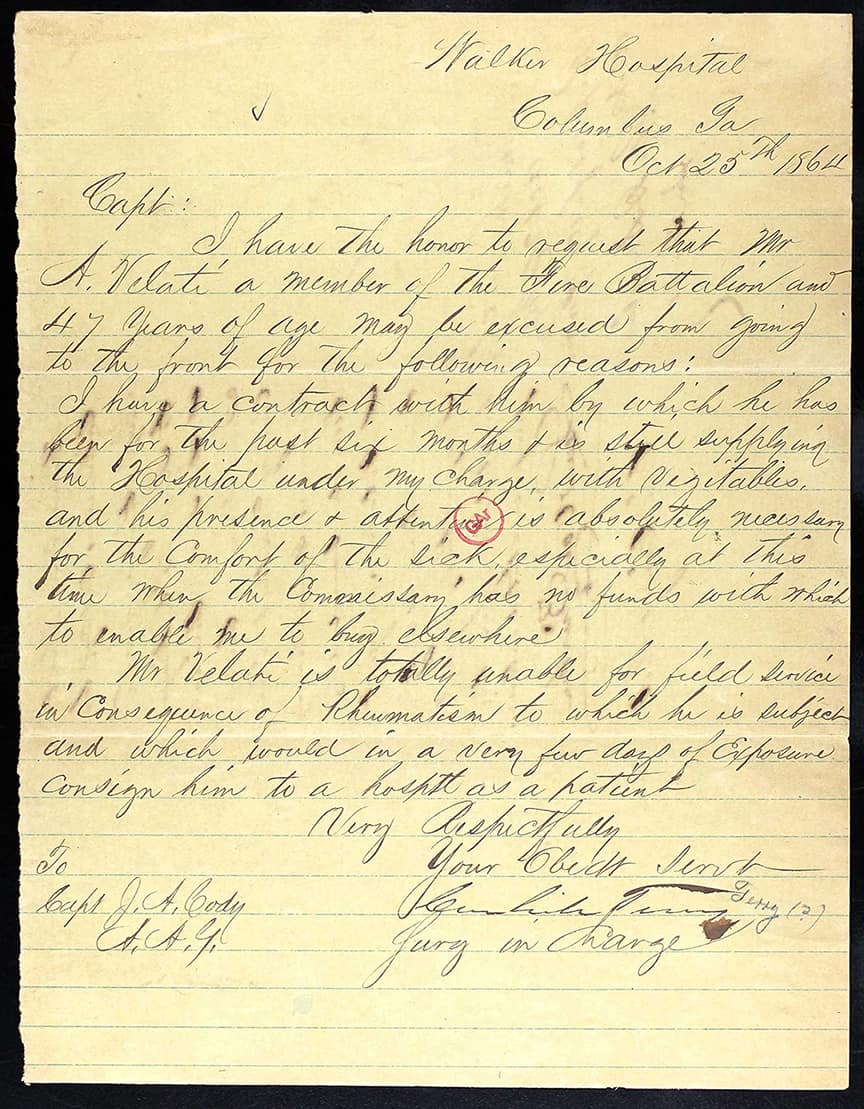 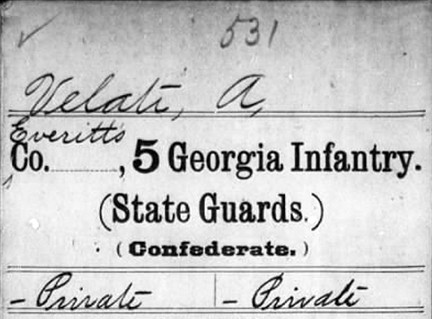 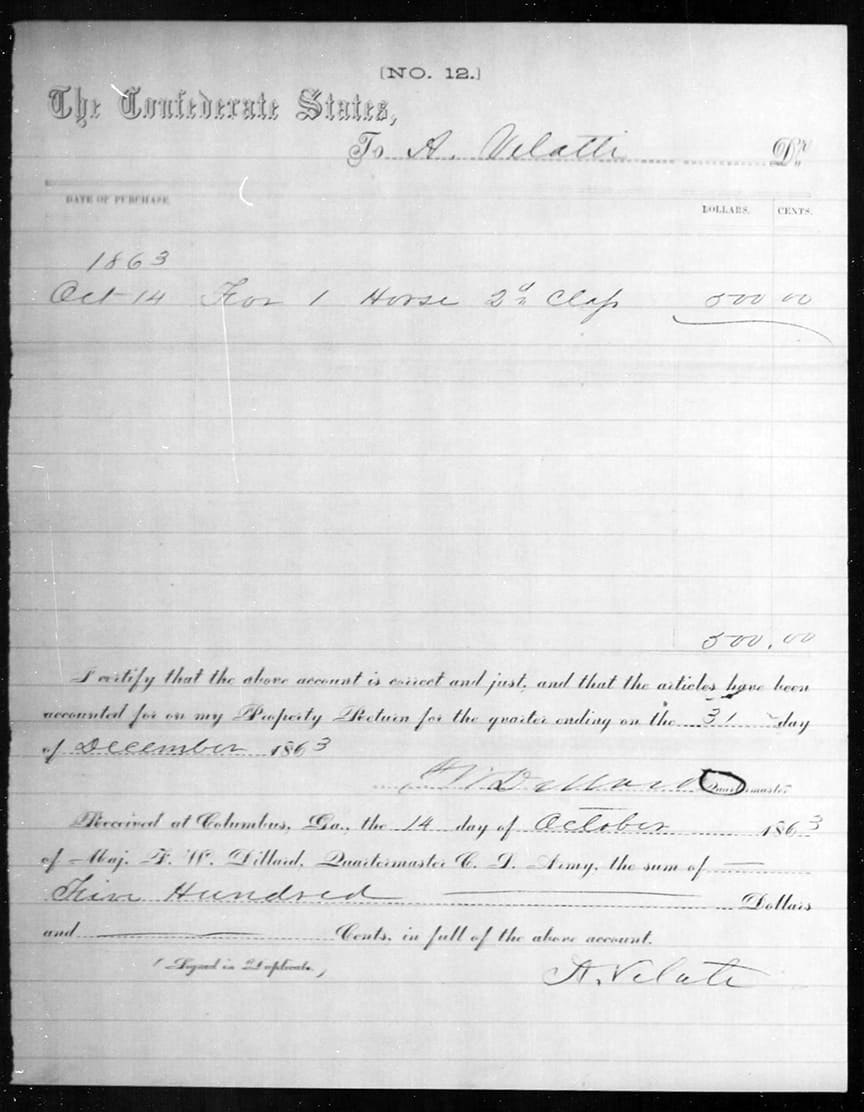 Ferdinand Meyer V is a native of Baltimore, Maryland and has a BFA in Fine Art and Graphic Design from the Kansas City Art Institute and School of Design. Ferdinand is the founding Principal of FMG Design, a nationally recognized design consultation firm. Ferdinand is a passionate collector of American historical glass specializing in bitters bottles, color runs and related classic figural bottles. He is married to Elizabeth Jane Meyer and lives in Houston, Texas with their daughter and three wonderful grandchildren. The Meyers are also very involved in Quarter Horses, antiques and early United States postage stamps. Ferdinand is the past 6-year President of the Federation of Historical Bottle Collectors and is one of the founding members of the FOHBC Virtual Museum.
View all posts by Ferdinand Meyer V →
This entry was posted in Bitters, Civil War, History, Questions and tagged Angelo, bitters, cigar, Civil, columbus, Confederate, Georgia, Holis, Italy, Lou, Stomach, Velati, war. Bookmark the permalink.