Dr. Roback was neither a Doctor nor a Roback. He was an unsuccessful farmer, turned salesman, who in 1844, escaped debtor’s prison in his native Sweden. 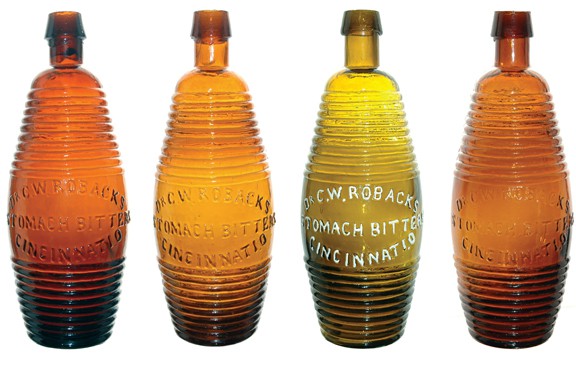 ROBACK’S STOMACH BITTERS, Prince, Walton & Co. poster (reproduction) – Meyer Collection (I had this framed and it looks great in my bottle work room) 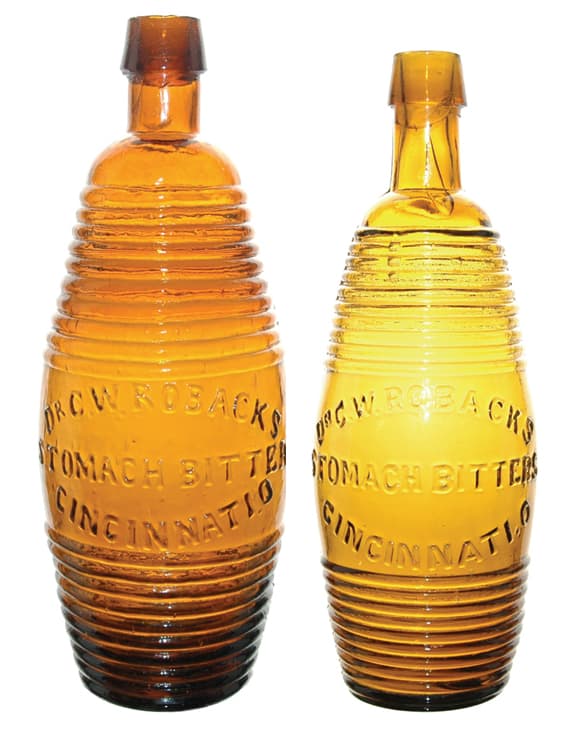 The post is about the popular, larger, Ring | Ham R 73, Roback’s Stomach Bitters from Cincinnati, Ohio. I will follow up with a post on the smaller R 74 barrels (see comparison photograph above). The R 73 is a big, robust figural barrel that is great to hold. It is even paired with a partially clothed rubenesque woman in the popular advertisement (pictured above). It embodies everything you want in a barrel. You can find them crude, full of bubbles and with pontils which makes it even more exciting. The colors are not as vibrant as an Old Sachem Bitters and Wigwam Tonic but none-the-less, strong enough to do a run of ambers leading to green. The Roback’s also have support information and related material, some of which I have referenced below. Notice how the artistic image of the building appears on the Roback’s poster, letterhead, tax stamp and label. Now that is consistency!

Note: Dr. Roback was neither a Doctor nor a Roback. He was an unsuccessful farmer, turned salesman, who in 1844, escaped debtor’s prison in his native Sweden. He started in Boston as Dr. Roback selling horoscopes and founded an astrological college. He sold galvanic chains which were a cure for worms in children. He also sold love powders. He moved to Philadelphia and the Cincinnati where he died in 1867. 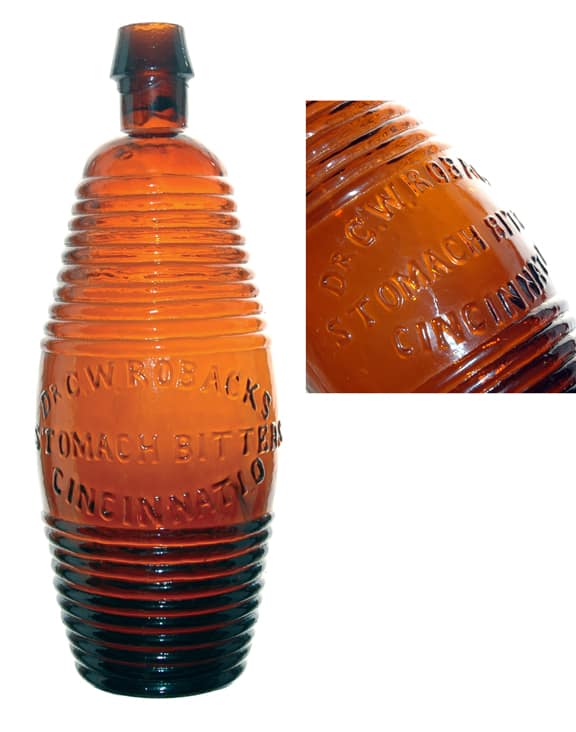 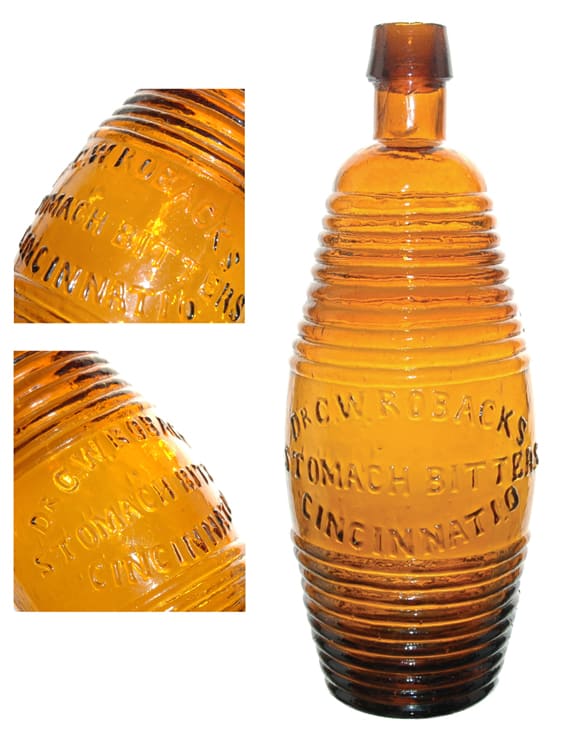 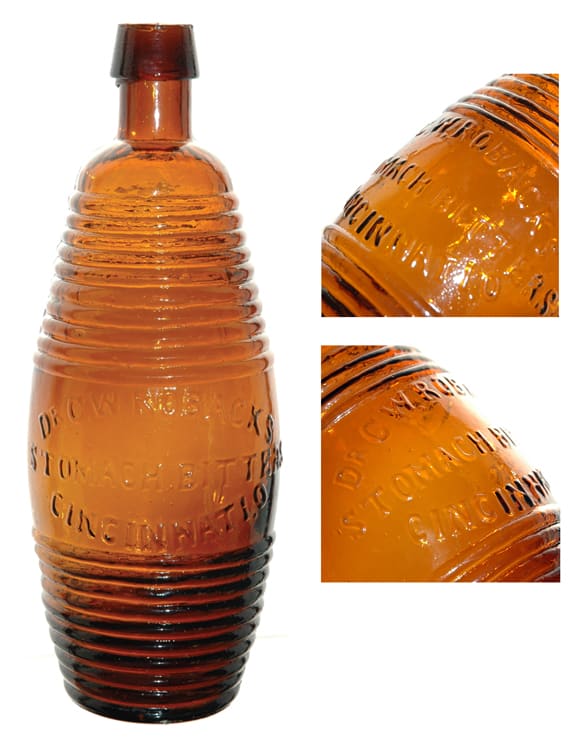 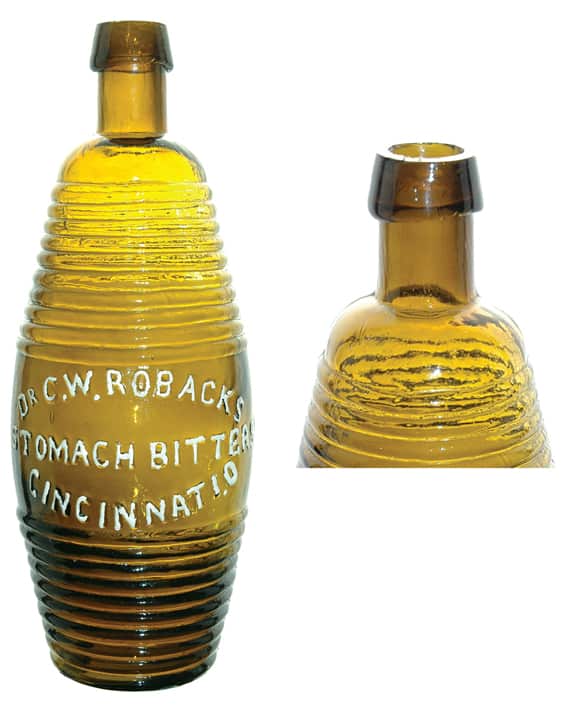 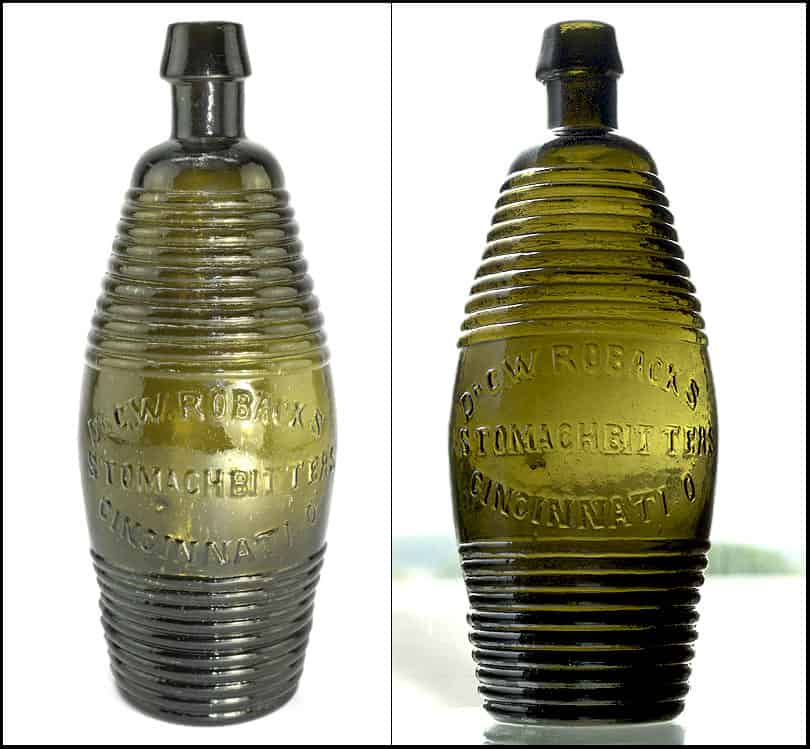 “DR. C.W. ROBACK’S / STOMACH BITTERS / CINCINNATI, O.”, (Ring/Ham R-73), Ohio, ca. 1865 – 1870, deep olive green barrel, 9 7/8”h, smooth base, applied tapered collar mouth. Fine example. In past sales we have sold a few of these, always in a dark olive color. This one is considerably lighter in color and passes light easily. Here’s one that just missed the pontil rod, but certainly of the same period. Purchased from a 2008 Bottles and More Auction. – Glass Works Auctions – Bob Ferraro Collection – Session 1 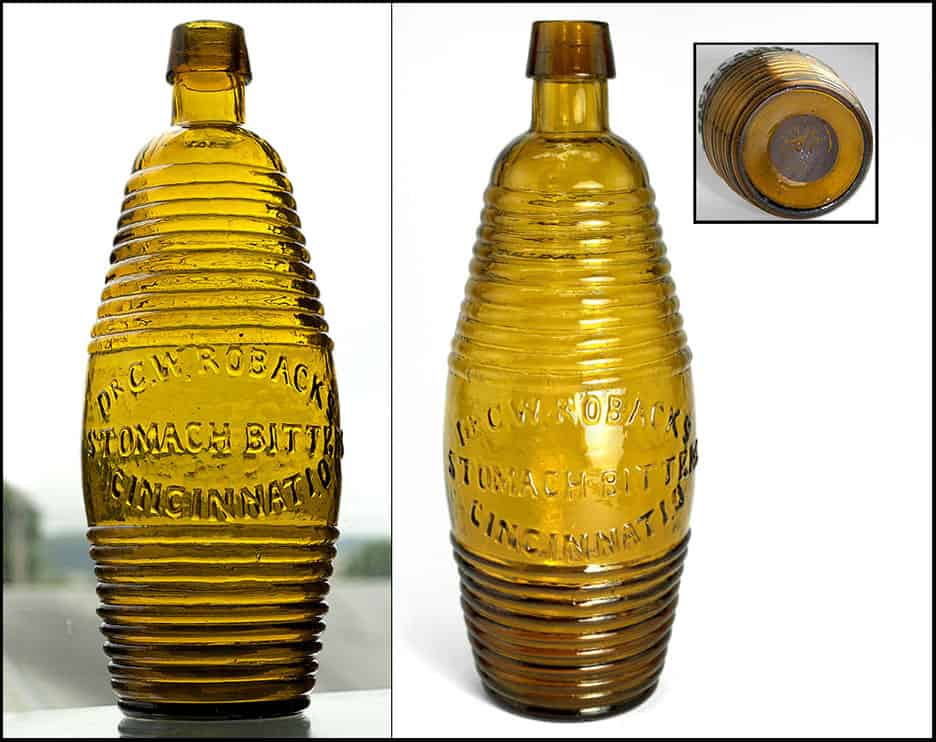 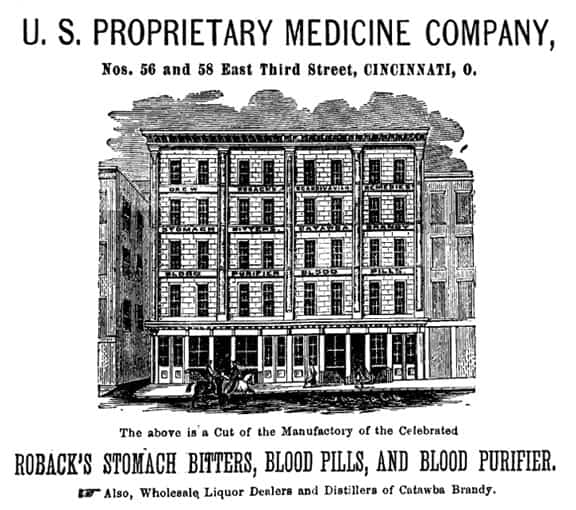 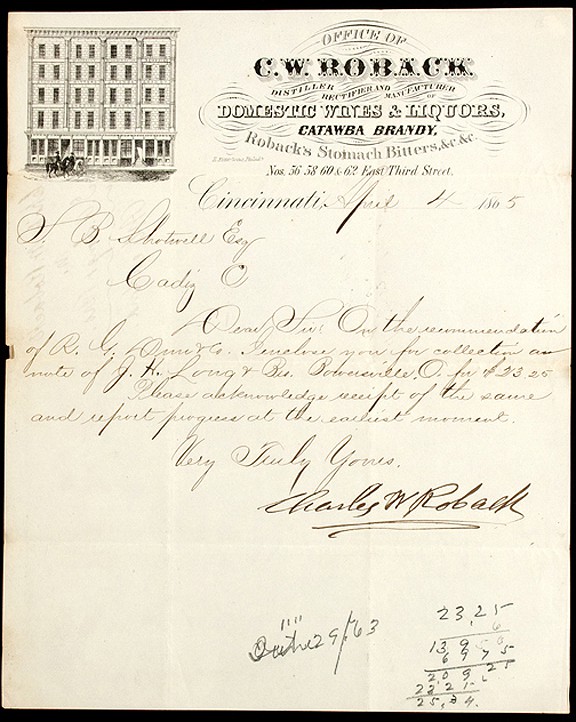 Dr. C.W. Roback of Cincinnati, Ohio, introduced a group of proprietary medicines in 1855, designating them as “Scandinavien” in 1857. A year later the designation was changed to “Scandinavian” and applied to Blood Pills and Blood Purifier. All were distributed through a wholesale druggist, Demas Barnes. The United States Proprietary Medicine Company, also of Cincinnati, took over the business in 1866, whereupon “Dr.” Roback was listed in the city directory as “Manufacturer of Fine Cut and Smoking Tobacco.” The six-cent stamp was issued first, for use on the Stomach Bitters. It appeared on April 24, 1867 and was last delivered on June 18, 1868. 63,622 were issued, all on old paper. The four-cent stamp, used on bottles of the Blood Purifier, was first issued on May 14, 1867 and last issued in July of 1875. 192,968 were printed on old paper and 38,750 on silk paper. The copy above is printed on experimental silk paper, so counted with the old paper copies. –  rdhinstl’s Page 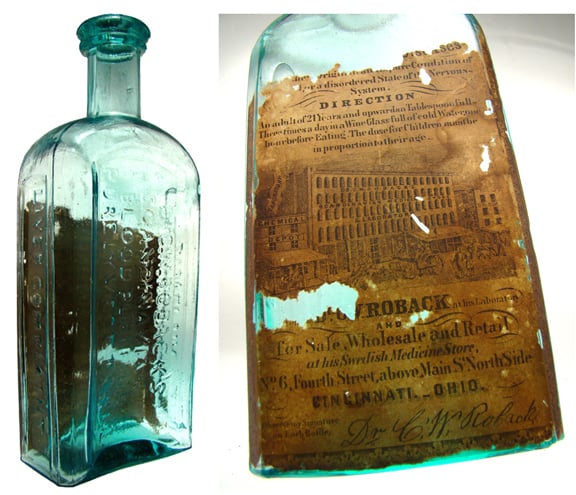 DR. C.W. ROBACKS SCANDINAVIAN BLOOD PURIFIER PURELY VEGETABLE LIVER COMPLAINT. Applied top and smooth base with partial original label. This is one with a familiar name and not the first time we’ve seen the Roback name associated with the country of Scandinavia. This one has about two-thirds of the original label, which shows a building and street scene. The bottle itself is quite crude and stands somewhat askew. Notice the large bulbous top and overall pristine condition of this rare bottle. Here is a bottle that appeals to not only the bitters collectors, but also medicine collectors alike. – sold by American Bottle Auctions 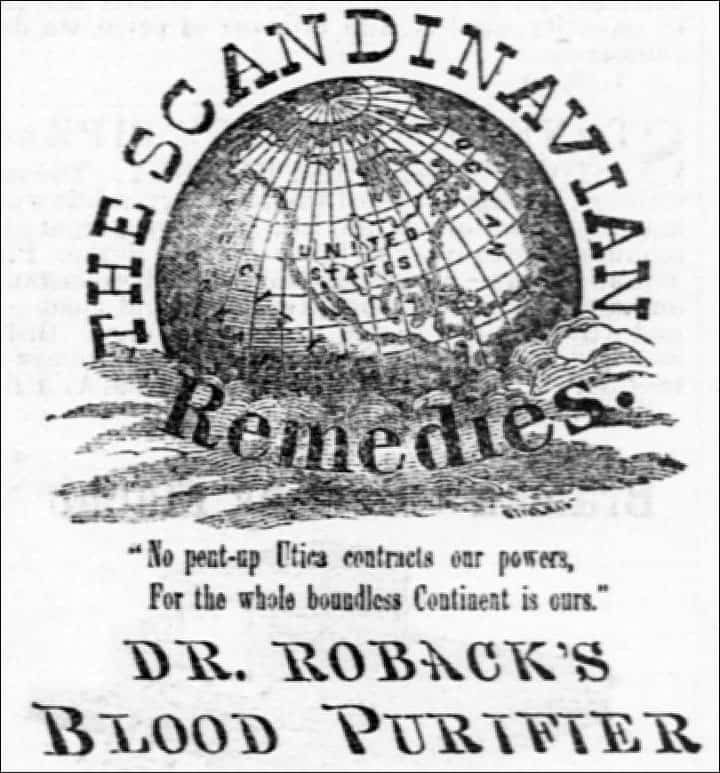 1844: Dr. Roback was neither a Doctor nor a Roback. He was an unsuccessful farmer, turned salesman, who in 1844, escaped debtor’s prison in his native Sweden.

1855: Dr. C.W. Roback of Cincinnati, Ohio, introduced a group of proprietary medicines in 1855, designating them as “Scandinavian“.

1857: Roback modified the word “Scandinavian” and applied to Blood Pills and Blood Purifier.

Ferdinand Meyer V is a native of Baltimore, Maryland and has a BFA in Fine Art and Graphic Design from the Kansas City Art Institute and School of Design. Ferdinand is the founding Principal of FMG Design, a nationally recognized design consultation firm. Ferdinand is a passionate collector of American historical glass specializing in bitters bottles, color runs and related classic figural bottles. He is married to Elizabeth Jane Meyer and lives in Houston, Texas with their daughter and three wonderful grandchildren. The Meyers are also very involved in Quarter Horses, antiques and early United States postage stamps. Ferdinand is the past 6-year President of the Federation of Historical Bottle Collectors and is one of the founding members of the FOHBC Virtual Museum.
View all posts by Ferdinand Meyer V →
This entry was posted in Bitters, Collectors & Collections, Color Runs, Figural Bottles and tagged Barrel, bitters, Charles W. Roback, Cincinnati, Dr. Roback, Earl Patterson, Figural, Meyer Collection, ohio, Prince, Roback's Stomach Bitters, Walton & Company. Bookmark the permalink.