I guess my biggest question here would be why Jacob A. Wolford would put a “Z” on his figural barrel whiskey bottle? Does it mean Zebra, Zorba, Zion, Zipper or something else? Who knows? Mr. Wolford was born in Baden-Baden, Germany in 1846 and was married to a woman named Mary who was three years older. Maybe her maiden name started with a “Z”? They lived in Chicago, Illinois as Wolford came to Chicago from Buffalo, New York in 1869.

Update: The letter Z is a stock market ticker symbol for miscellaneous or the month December for futures trading. – Marianne Dow

Update: I think the following articles will explain the “Z” that is embossed on the WOLFORD bottle. – Best Regards, Corey Stock 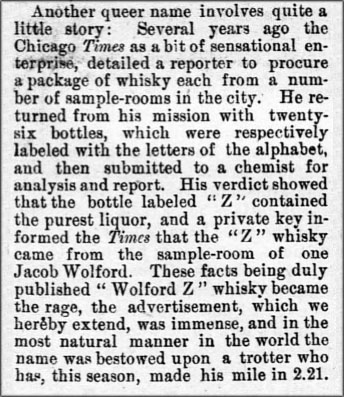 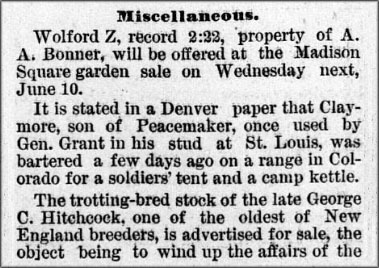 In 1870, Jacob was a young twenty-five and conducted a saloon called Wolford’s on Clark Street near Foley’s Billiard Hall. This site would eventually become the Grand Opera House which was built upon the original site of Bryan Hall and Hooley’s Opera House.

J. A. Hamlin and brother (L. B. Hamlin) purchased the property in January, 1872 and erected the first building that was completed upon that block after the Great Chicago Fire. In 1873, the Hamlin Brothers built upon the rear lot what was subsequently known as Foley’s Billiard Hall, which was at the time the largest billiard hall in the world, containing thirty tables on one floor. In 1874, the billiard hall property passed out of the hands of Mr. Foley into the hands of Hamlin Bros., and the billiard business was discontinued after a few months and the hall re-constructed, with an additional building added to the east end, and for some two years was occupied as a garden, after the style of Gilmore’s Garden of New York, with fountains, waterfalls, vocal and instrumental music, and all kinds of refreshments.

Wolfords chief patrons at his saloon were traders on the Chicago Board of Trade, which was then a block away. This relationship would pave the way for his occupation in later years as Wolford was an original member of the Board of Trade which was established in 1848. The Board of Trade is one of the world’s oldest futures and options exchanges.

The Temperance Movement gave Wolford some problems at his saloon and the adjacent billiard hall so he opened up a liquor store at 123 Clark Street in 1872. 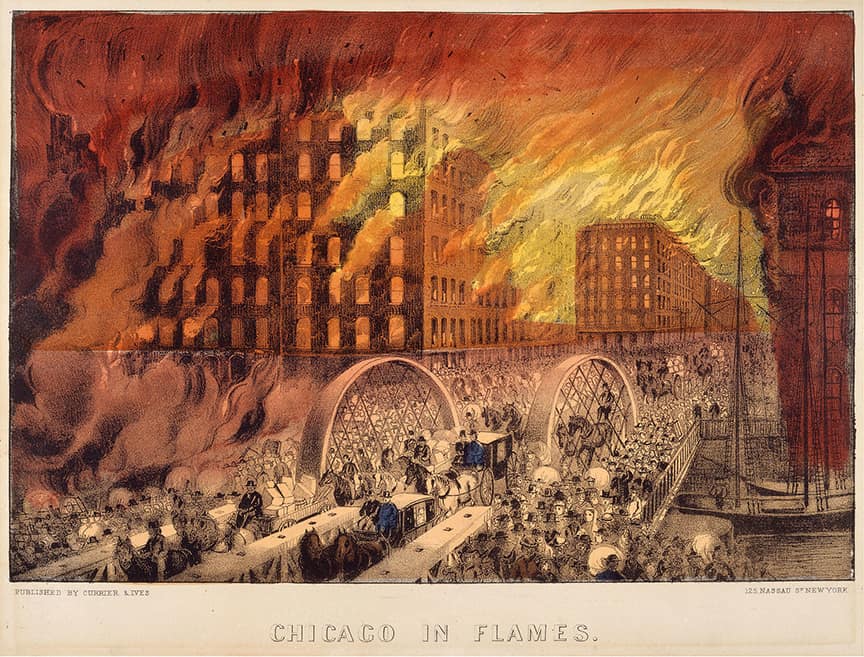 Wolford also had to deal with The Great Chicago Fire which was a conflagration that burned from Sunday, October 8, to early Tuesday, October 10, 1871. The fire killed up to 300 people, destroyed roughly 3.3 square miles of  downtown Chicago (see map below) and left more than 100,000 residents homeless. The above is an artist’s rendering of the fire, by Currier and Ives; the view faces northeast across the Randolph Street Bridge. 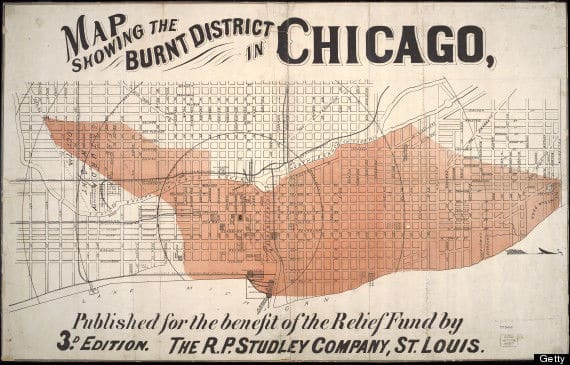 Wolford ordered his figural barrel bottles in amber from A & D H Chambers (Alexander and David. H Chambers) in Pittsburgh, Pennsylvania in 1871 or 1872. Both bits of information are embossed on the bottle which also has this really cool glass screw thread stopper. 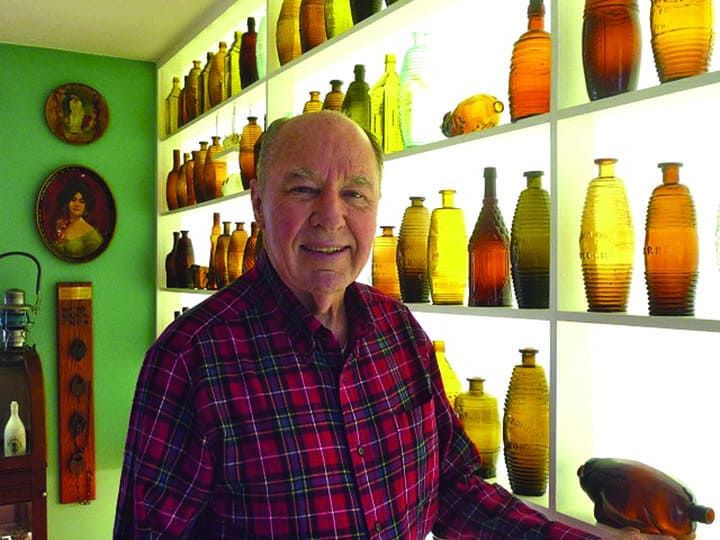 I can only find two visual references of this bottle so it must be pretty rare. Te above example is a low resolution image from the 1st Chicago Bottle Club. The example below was offered in the recent Glass Works Auctions, Session 1 from the great Bob Ferraro Collection. Bob (pictured above) is known as Mayor Ferraro and the “Barrel King”. Many times I would come across an obscure barrel only to find that Bob would have an example. You can actually see Bob’s example at the 2 o’clock position in the above picture. 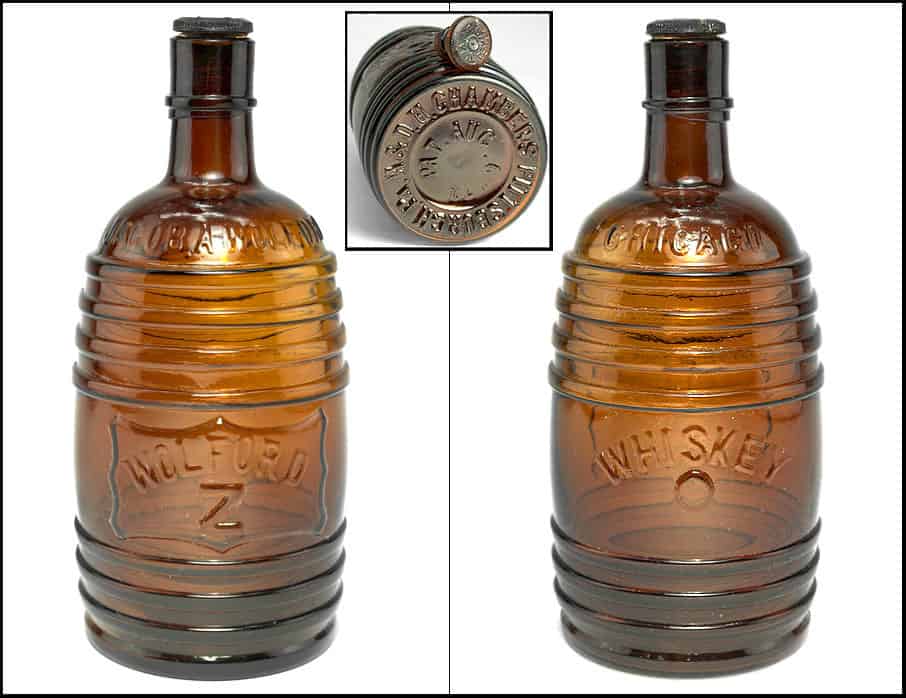 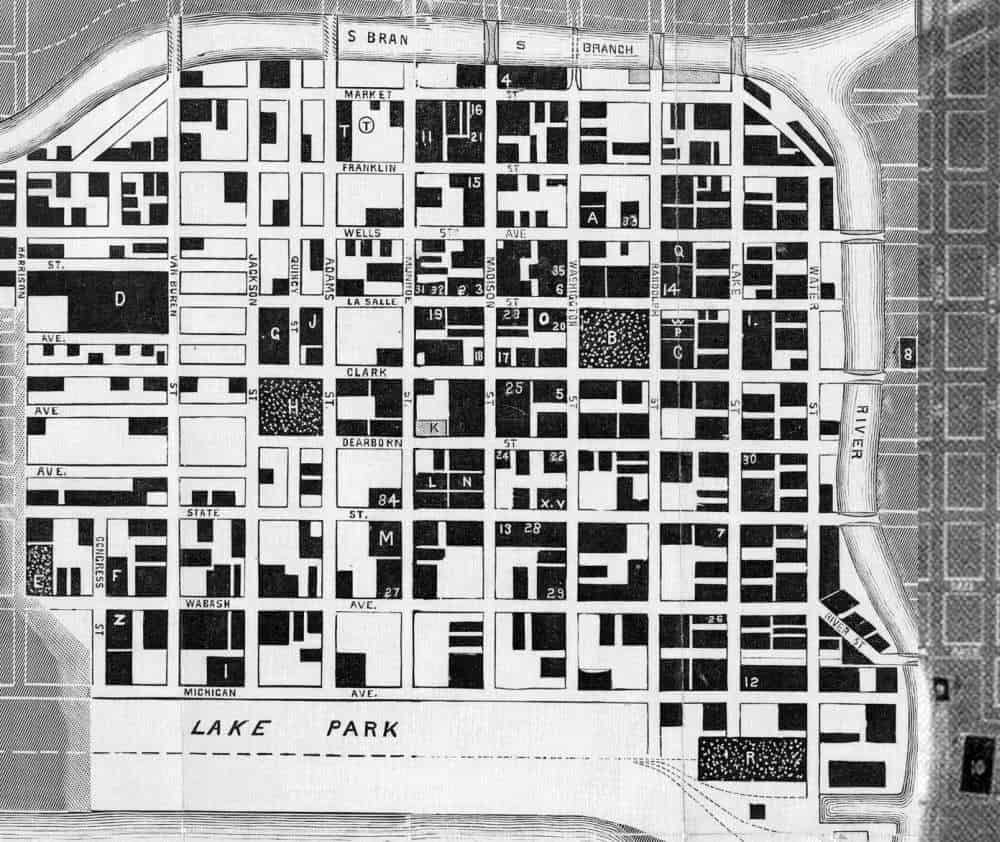 We can find many references for Mr. & Mrs. Jacob A. Wolford in the society pages of the Chicago Daily Tribune in later years as Wolford made a fortune in his wholesale liquor business. As noted earlier, he is best known as a pioneer with the Chicago Board of Trade. Mrs. Wolford would later have a clock tower built in her husbands honor after his death in late 1917. The tower was built in 1931 and stands today. It is pictured below with a story of her inspiration. 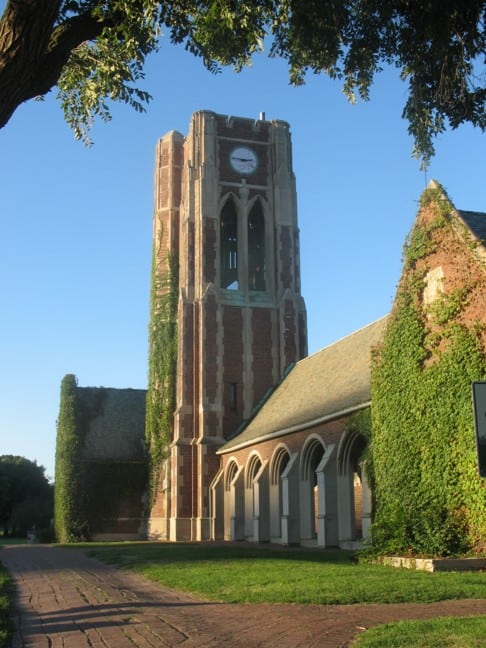 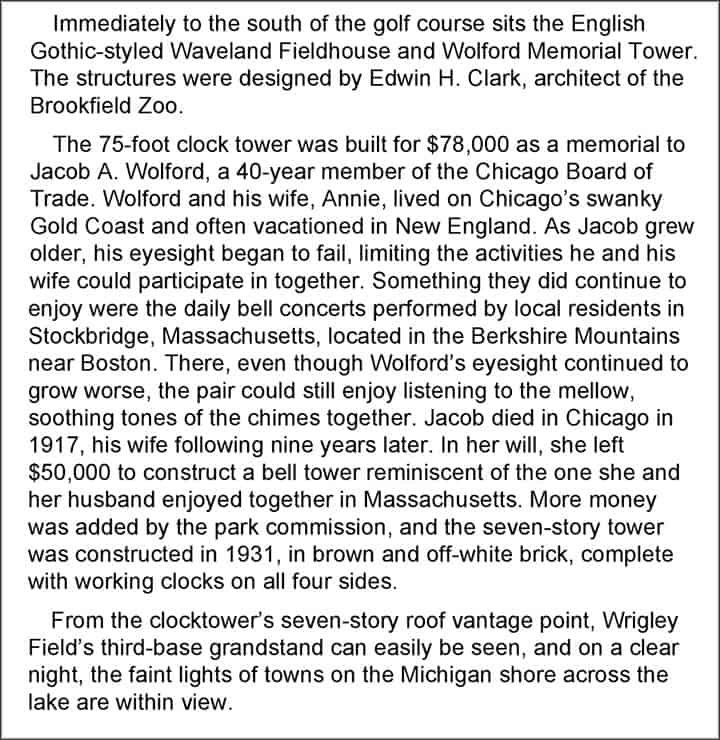 1872: Notice: Jacob A. Wolford will Open His New Establishment

1879-1880: Jacob A. Wolford, Wholesale Liquor Merchant – Annual Report of the Board of Trade of the City of Chicago

Ferdinand Meyer V is a native of Baltimore, Maryland and has a BFA in Fine Art and Graphic Design from the Kansas City Art Institute and School of Design. Ferdinand is the founding Principal of FMG Design, a nationally recognized design consultation firm. Ferdinand is a passionate collector of American historical glass specializing in bitters bottles, color runs and related classic figural bottles. He is married to Elizabeth Jane Meyer and lives in Houston, Texas with their daughter and three wonderful grandchildren. The Meyers are also very involved in Quarter Horses, antiques and early United States postage stamps. Ferdinand is the past 6-year President of the Federation of Historical Bottle Collectors and is one of the founding members of the FOHBC Virtual Museum.
View all posts by Ferdinand Meyer V →
This entry was posted in Collectors & Collections, Figural Bottles, History, liquor, Liquor Merchant, Spirits, Whiskey and tagged ashes, Barrel, cap, chicago, Clark, Ferraro, Figural, fire, Jacob A. Wolford, liquor, merchant, racehorse, screw, Series, spirits, Whiskey, wholesale, Z. Bookmark the permalink.