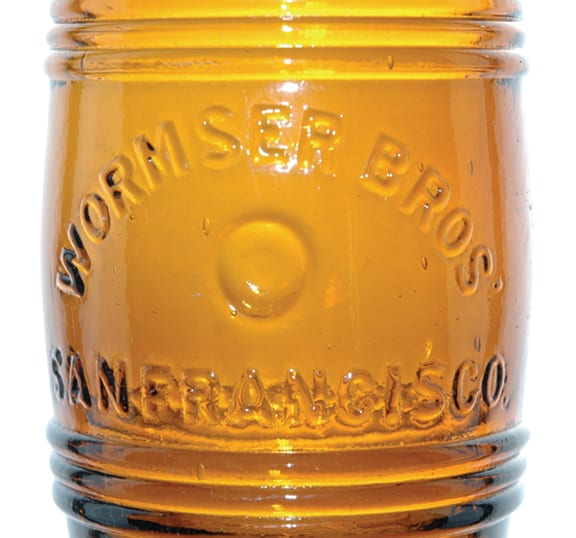 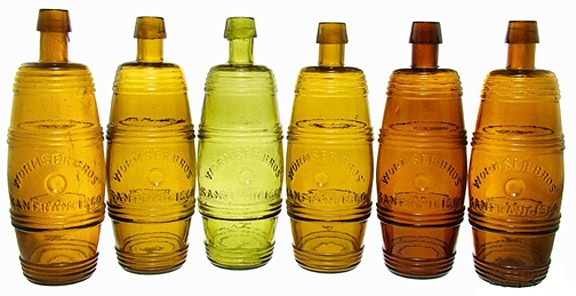 OK, let’s knock out this great Wormser Brothers figural barrel that I have posted about before on Peachridge Glass. This “belly button”, “bulls-eye” or “bunghole” barrel, with the much desired San Francisco embossing, is a hot one for any bitters, figural or western collector. The world according to Wormser was relatively calm of late until the spectacular green example showed up and was sold by American Bottle Auctions for the princely sum of $18,480 to a prominent western collector in 2011.

Here is what we have on this exciting and well-proportioned barrel starting off with the Ring and Ham Bitters Bottles listing:

“Although I could not find any advertisements to confirm what these bottles contained, Western collectors believe this container held a whiskey bitters product”

[Western Bitters News – Rick Simi] The firm of Wormser Bros. was located on the corner of California and Front Streets in San Francisco and listed as importers and jobbers of wines and liquors. Started sometime in 1856, Isaac Wormser, who was living in Germany, was the president of the company and his brother Lewis was the manager. In 1864 Lewis left San Francisco and his brother Simon took over management of the company. In October of 1867, during Simon’s management of the firm, they trademarked the “Golden Sheaf” brand of whiskey. By 1872 the Wormser Brothers business was sold to the firm of Braeg Frank and Dallemand.

It is believed the barrel shaped bottle with an applied tapered top and a smooth base embossed WORMSER BROS. SAN FRANCISCO was produced for a very short period of time, possibly in 1869 only. Although I could not find any advertisements to confirm what these bottles contained, Western collectors believe this container held a whiskey bitters product.

This barrel shaped bottle comes in various shades of amber from light yellow to darker brown amber. Most examples show very little crudity but a couple examples that I have observed have some pretty good whittle to the glass.

It is thought that there are between 25 and 30 of the Wormser Brothers barrel in collections at the present time. Most collectors that I have talked to, don’t consider these bottles rare, but in my humble opinion are a very rare and collectible piece of Western glass.

SACRAMENTO, California – A Wormser Brothers barrel bitters bottle, made between 1867 and 1871 and quite possibly the only green example in existence (most are amber in color), soared to $18,480 in an internet and catalog auction that began in late August and ended on September 8th by American Bottle Auctions. It was the top lot of the 146 bottles sold.

Wormser Brothers barrel bitters were an early western bitters made in San Francisco, mainly in the 1860s. They were considered extremely rare until a group was found in Virginia City, Nevada, some years ago. Then the bottle just sold plus seven others (all amber) were found near the mouth of the Columbia River in Oregon more recently. The owner consigned the green one for this sale.

“That very same bottle in amber would probably only fetch around $1,800,” said Jeff Wichmann of American Bottle Auctions. “Color is everything, and this is the only green example I’m aware of. It is also heavily whittled, something you don’t often see in Wormser bottles. The top was crude and perfect and we graded it 9.6, only because of a light cleaning.”

The auction, which grossed just over $182,000, was a success by any measure, Wichmann said. “The page received over 60,000 views, and we had 192 bidders and 98 winners. Some, but not many, phone bids were also recorded. The average bottle sold for around $1,200, and usually it’s more like $1,000. That was a big plus, and bidder participation was very strong.”

The sale featured mainly historical flasks, bitters and food jars (such as pepper sauces). “Once again, quality excelled,” Wichmann said. “A good number of bottles sold in the $3,000-$15,000 range, and that to me is a strong sign that the overall market for rare and vintage bottles is very healthy, even in a down economy. And we continue to get in killer consignments.” 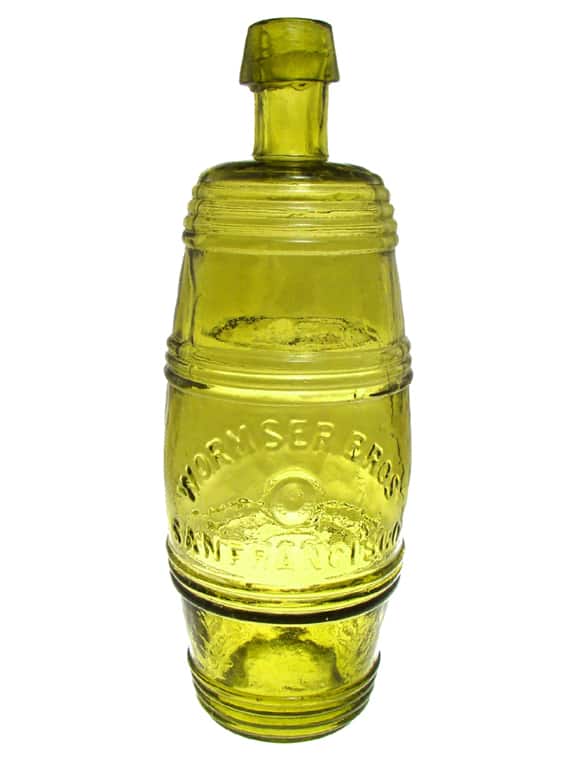 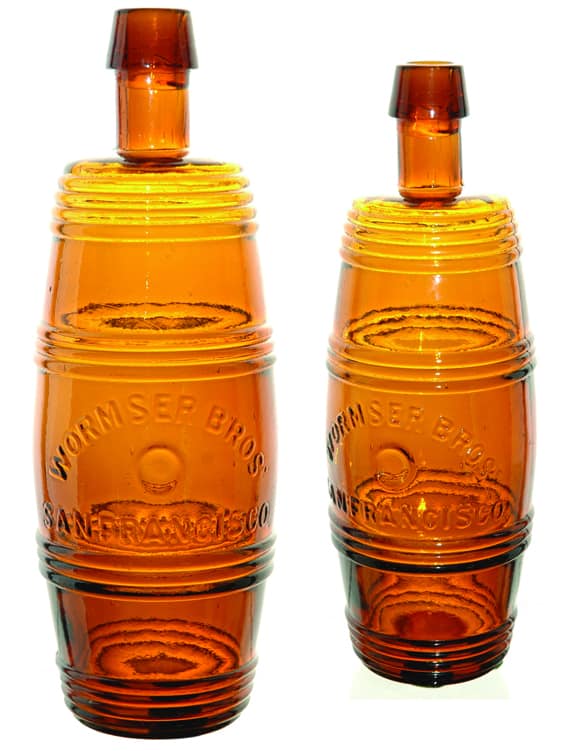 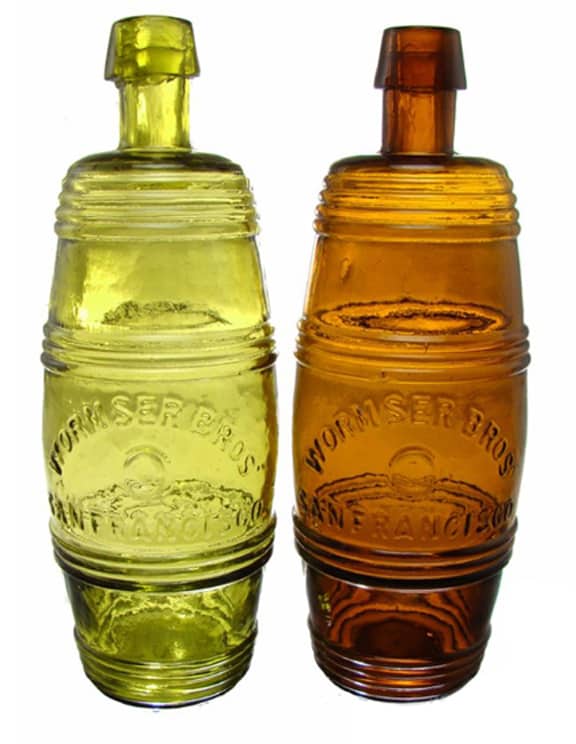 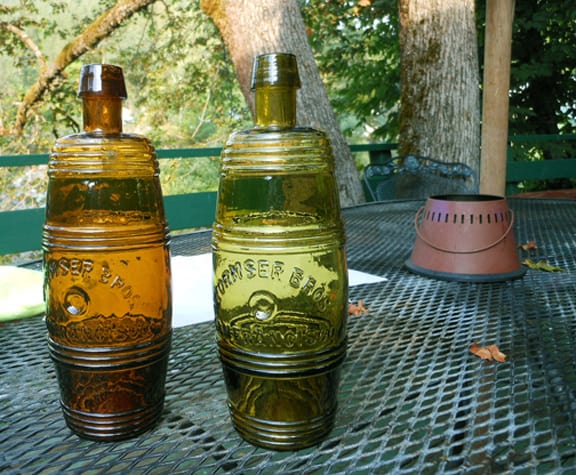 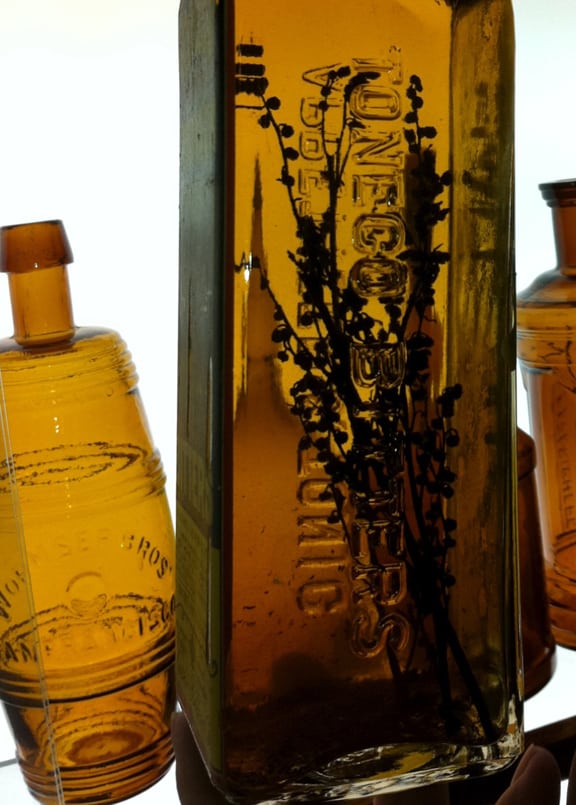 Golden Amber WORMSER BROS figural barrel sitting off to the left during my visit to see the Western Bitters collection of Don Dwyer.

Ferdinand Meyer V is a native of Baltimore, Maryland and has a BFA in Fine Art and Graphic Design from the Kansas City Art Institute and School of Design. Ferdinand is the founding Principal of FMG Design, a nationally recognized design consultation firm. Ferdinand is a passionate collector of American historical glass specializing in bitters bottles, color runs and related classic figural bottles. He is married to Elizabeth Jane Meyer and lives in Houston, Texas with their daughter and three wonderful grandchildren. The Meyers are also very involved in Quarter Horses, antiques and early United States postage stamps. Ferdinand is the past 6-year President of the Federation of Historical Bottle Collectors and is one of the founding members of the FOHBC Virtual Museum.
View all posts by Ferdinand Meyer V →
This entry was posted in Bitters, Collectors & Collections, Color Runs, Figural Bottles, Whiskey and tagged American Bottle Auctions, Barrel, bitters, Don Dwyer, Figural, Isaac Wormser, Jeff Wichmann, Lewis Wormser, Rick Simi, San Francisco, Whiskey, Wormser Brothers. Bookmark the permalink.