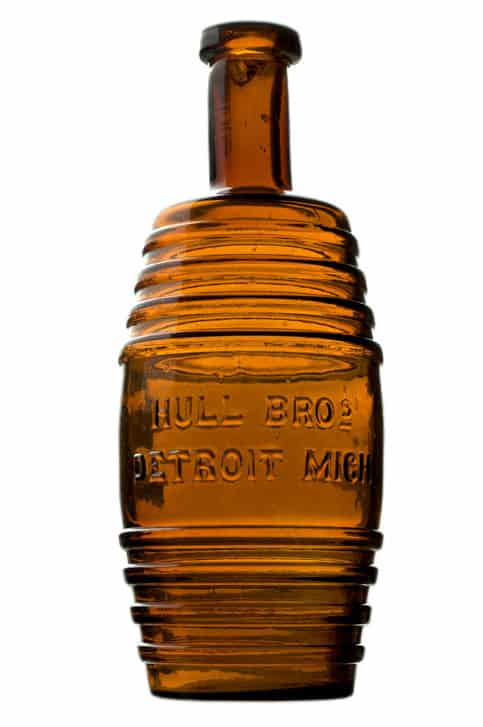 Here is a new barrel post for the extremely rare Hull Bros. from Detroit, Michigan. In fact, this is the only example I have ever seen. The amber bottle was offered in the recent Glass Works Auctions Session 1 from the great Bob Ferraro Collection. Bob is known as Mayor Ferraro and the “Barrel King”. Many times I would come across an obscure barrel only to find that Bob would have an example. Like I said, the Barrel King. 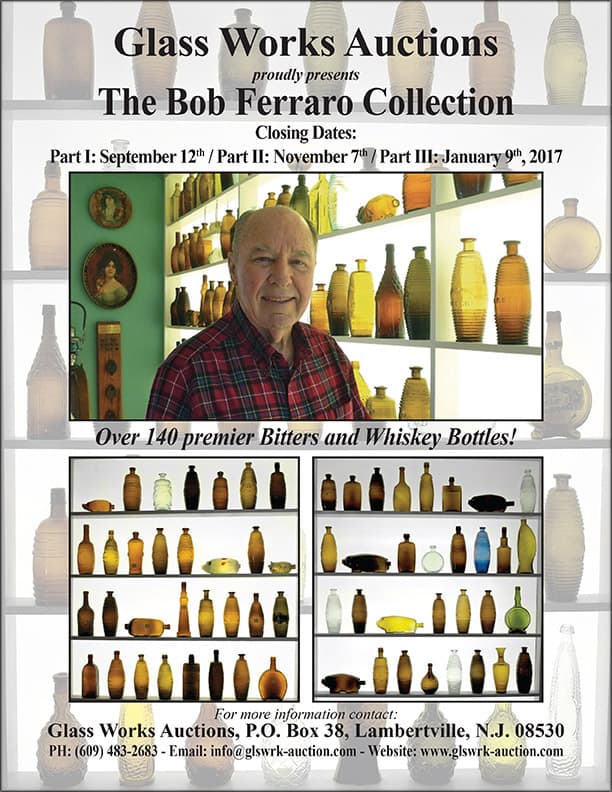 John and William Hull were the Hull Brothers and were established grocers located at the corner of Monroe Avenue and Campus Martius in downtown Detroit. This location was also called the Opera House block. You can see a listing below from the J.W. Weeks & Co.’s annual directory of Detroit for 1876-77. 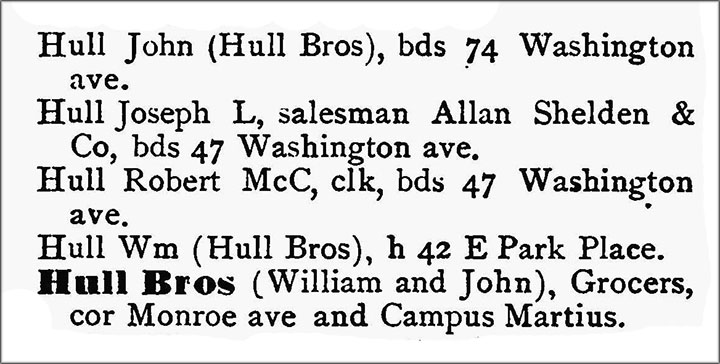 The following pictures show Bob’s bottle from the auction and the building which was occupied by the grocers for decades. They sold just about everything and probably had a bottle made up to sell a bitters or some other type of spirits. This probably would not have been a medicine. Hard really to say without a label or advertisement for the specific product. 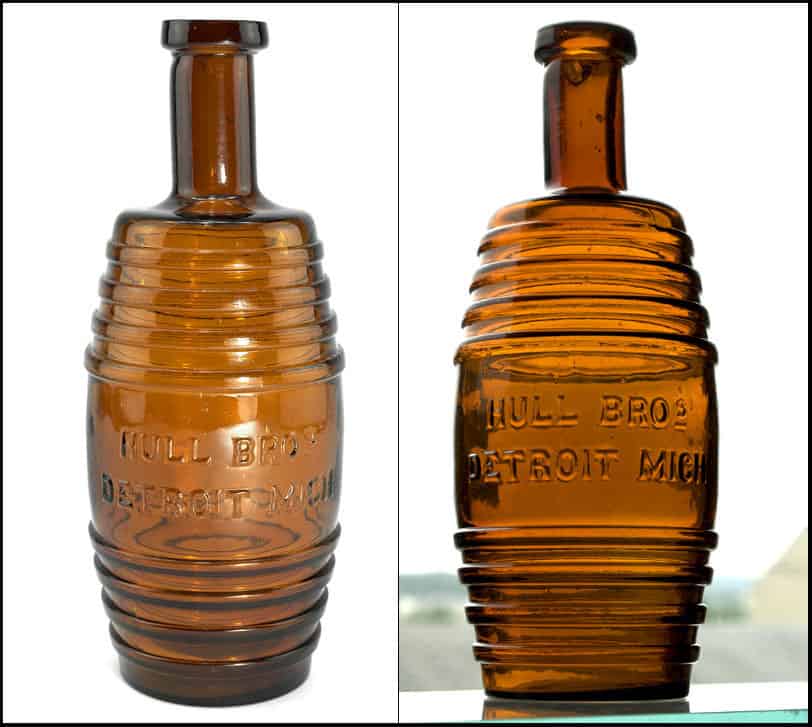 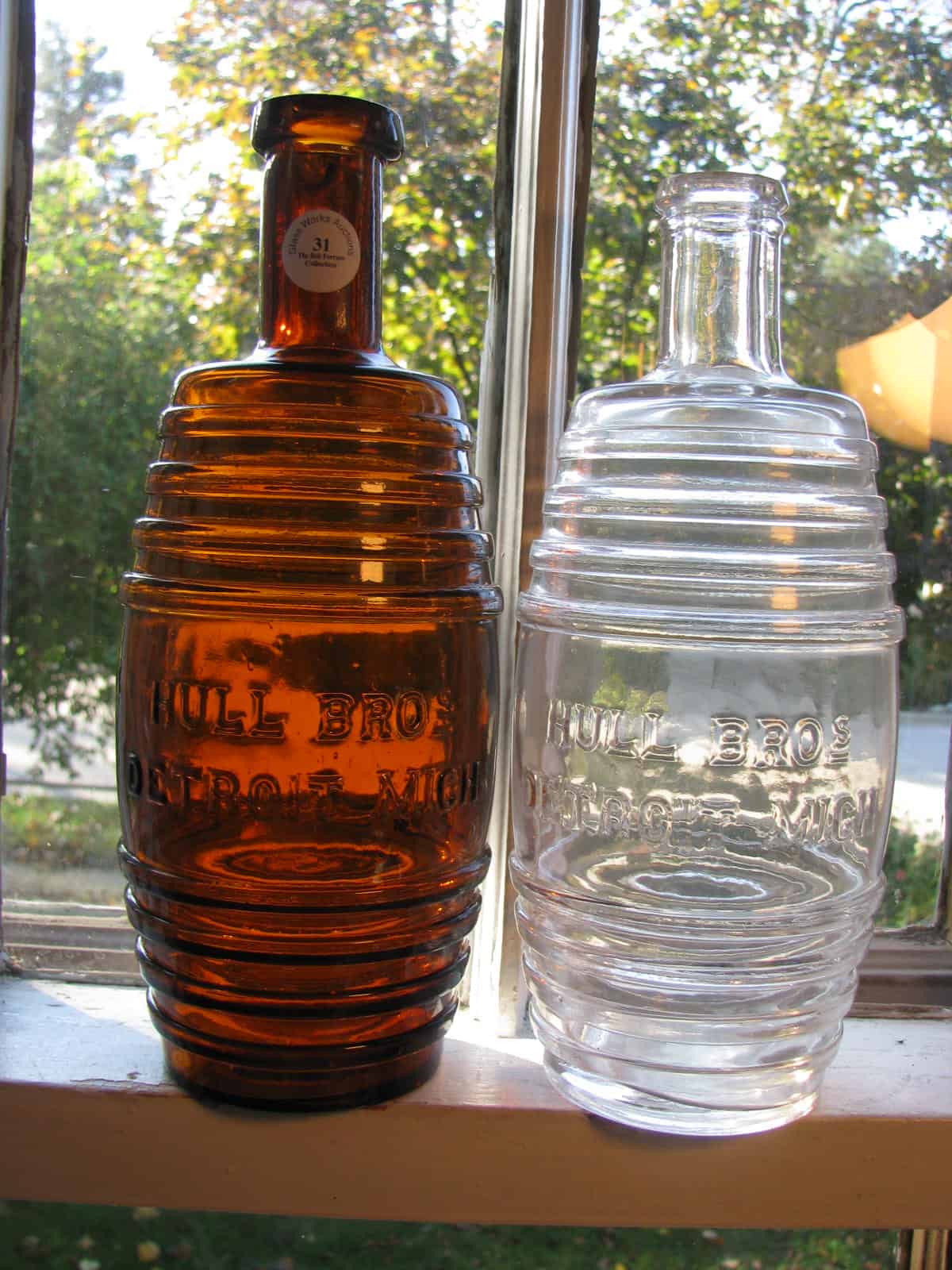 24 October 2016: I am proud to report that I was the winning bidder on this barrel, bringing it back to Michigan for the first time since at least 1986 when Bob bought it from a Skinner auction. Now, for the first time since the 1880s, Bob’s amber barrel has been reunited with it’s brother, the CLEAR example of this bottle, which I was able to purchase in 1997 from the Dick and Ted Kinney collection. Both of these are one of a kind, as far as I know. You can see that they have different neck lengths and different types of applied lips, but it looks like they were made in the same mold, based on a detailed review of the embossing. – Jeff Scharnowske 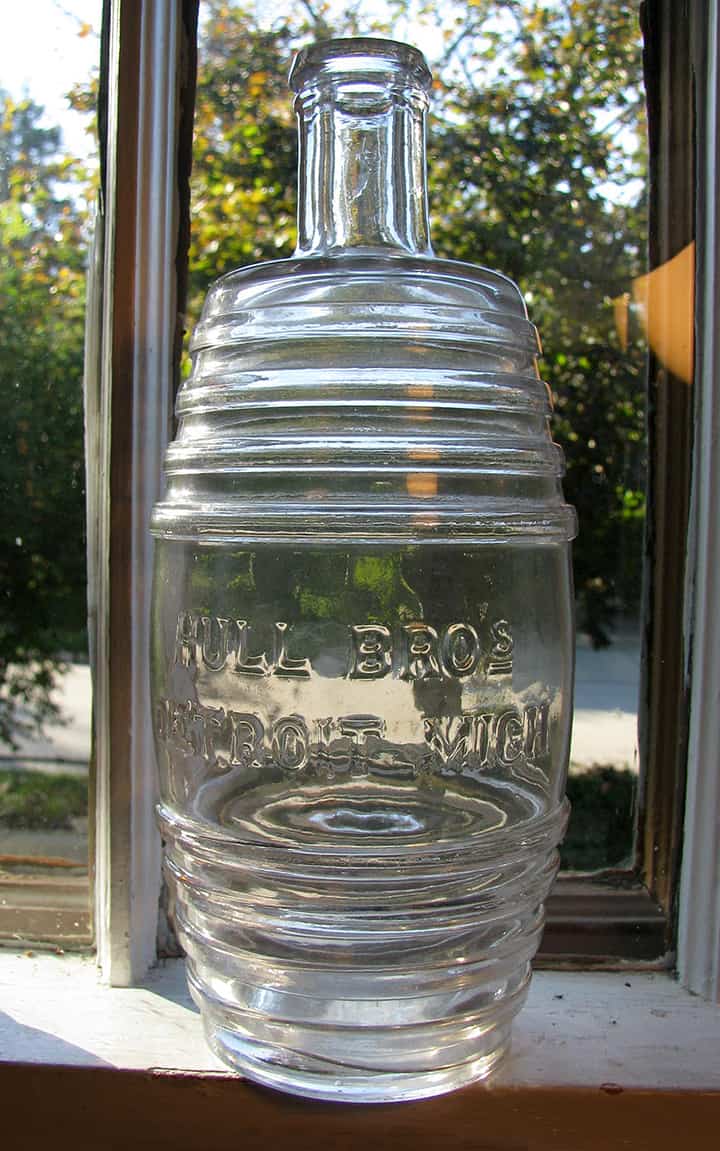 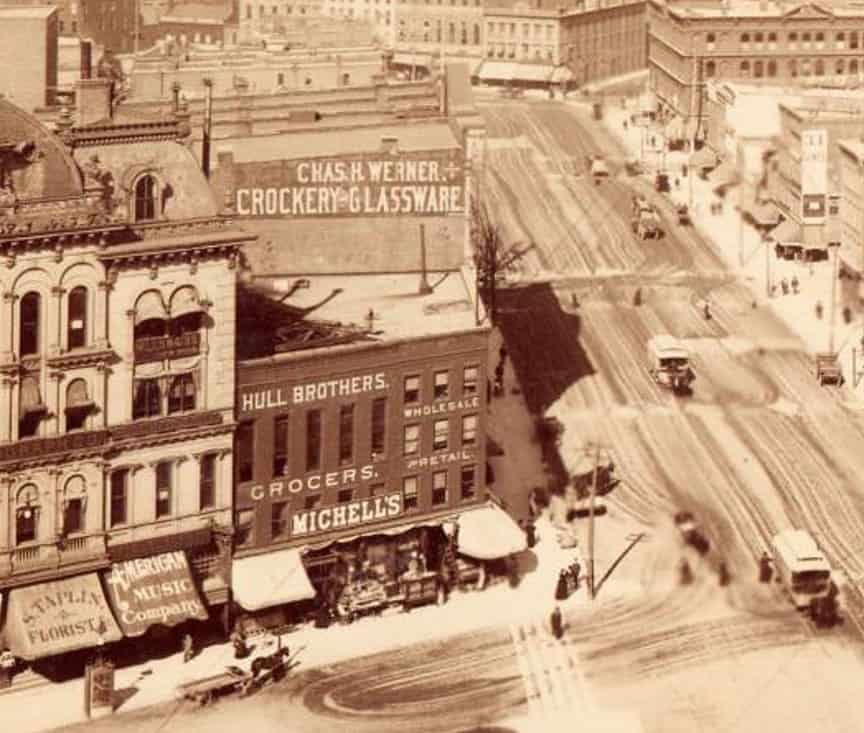 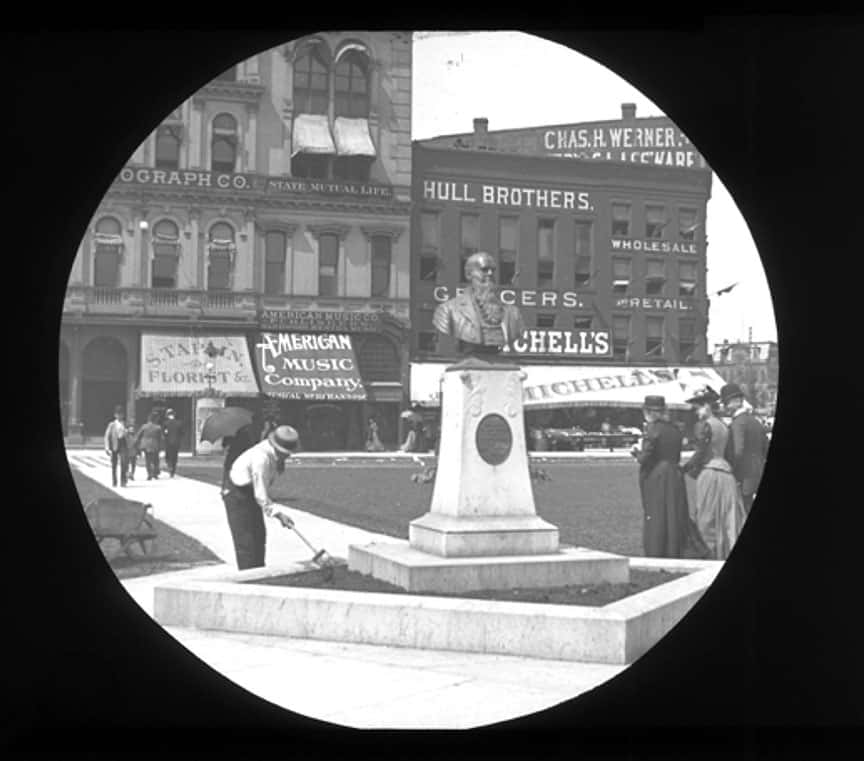 View of Hull Brothers Grocers and other businesses at Campus Martius, unidentified bust in foreground. Image is circular. Recorded in lantern slide ledger: “D/Streets-Campus Martius.” – before 1883 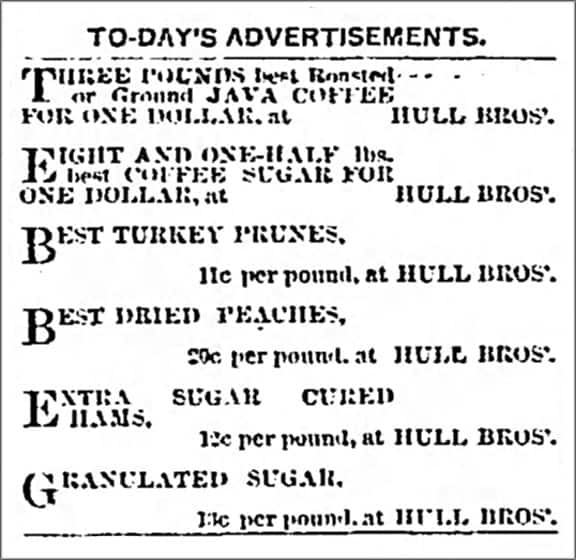 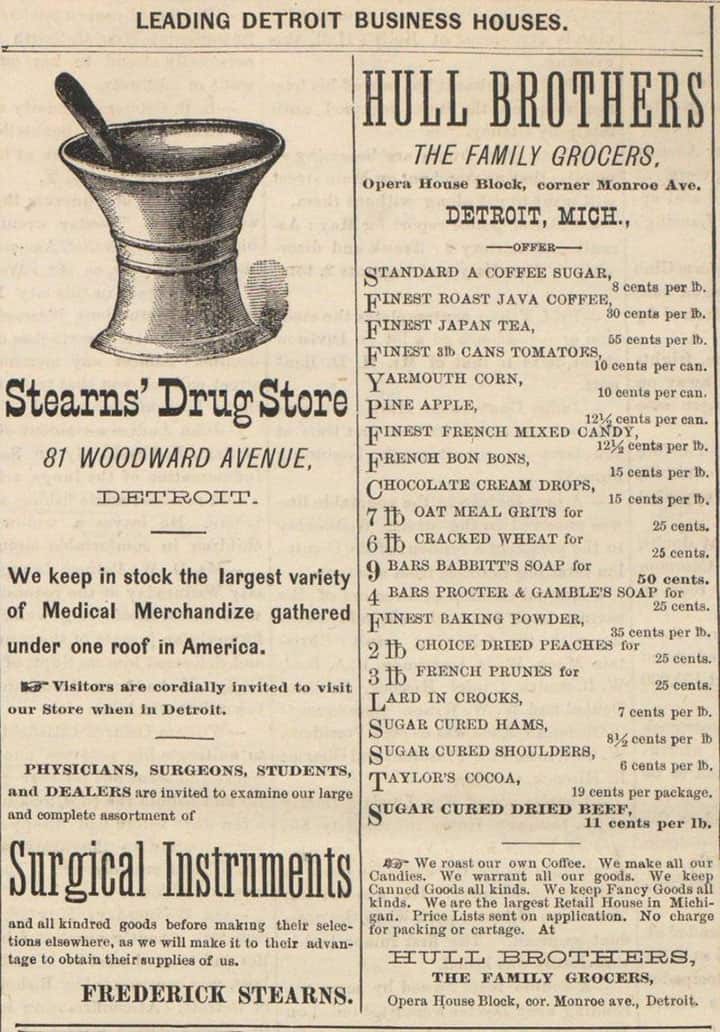 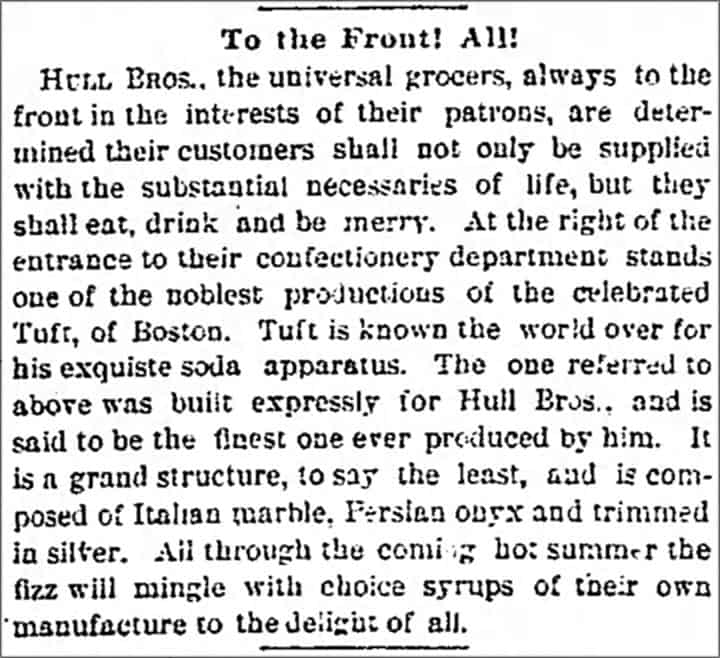 Ferdinand Meyer V is a native of Baltimore, Maryland and has a BFA in Fine Art and Graphic Design from the Kansas City Art Institute and School of Design. Ferdinand is the founding Principal of FMG Design, a nationally recognized design consultation firm. Ferdinand is a passionate collector of American historical glass specializing in bitters bottles, color runs and related classic figural bottles. He is married to Elizabeth Jane Meyer and lives in Houston, Texas with their daughter and three wonderful grandchildren. The Meyers are also very involved in Quarter Horses, antiques and early United States postage stamps. Ferdinand is the past 6-year President of the Federation of Historical Bottle Collectors and is one of the founding members of the FOHBC Virtual Museum.
View all posts by Ferdinand Meyer V →
This entry was posted in Advertising, Collectors & Collections, Figural Bottles, History, liquor, Liquor Merchant and tagged auction, Barrel, Bob Ferraro, Brothers, Detroit, Figural, grocer, Hull, Jeff Scharnowske, liquor, Michigan, spirits. Bookmark the permalink.