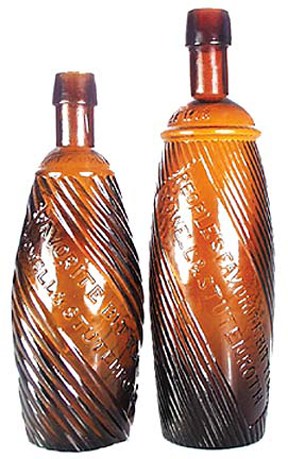 Here is a strong barrel in two forms that you do not come across often. I have only seen examples in the great Feldmann and Ferraro collections and have not been fortunate enough to obtain an example. High on the desirability list, Favorite Bitters and the later People’s Favorite Bitters from Naperville, Illinois. 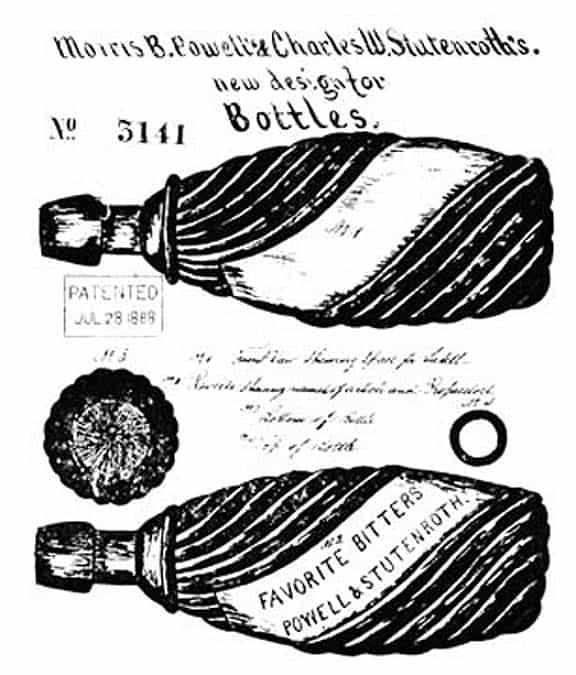 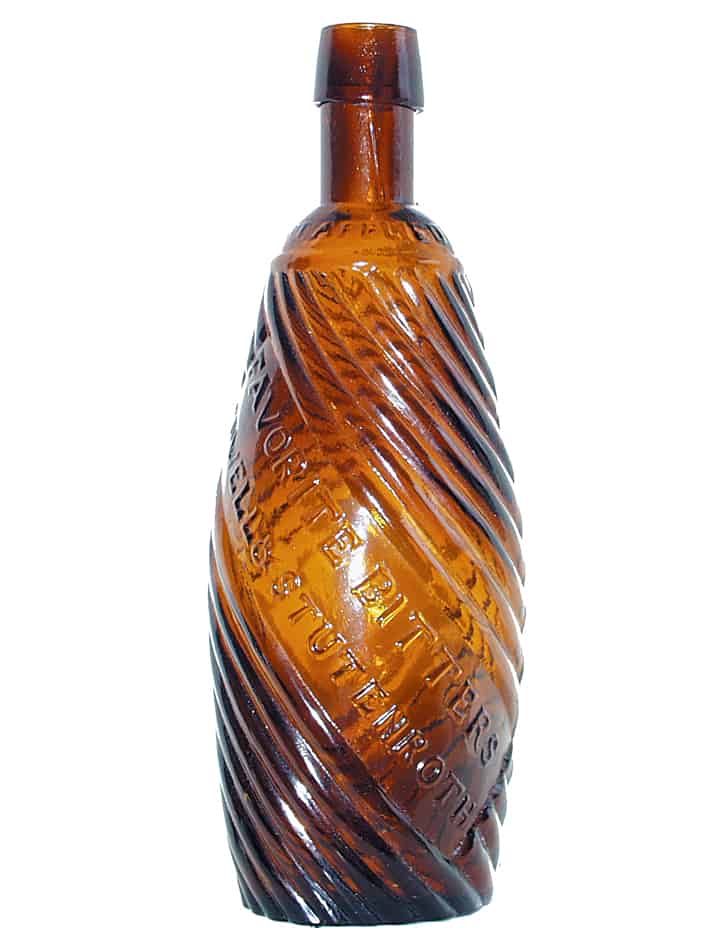 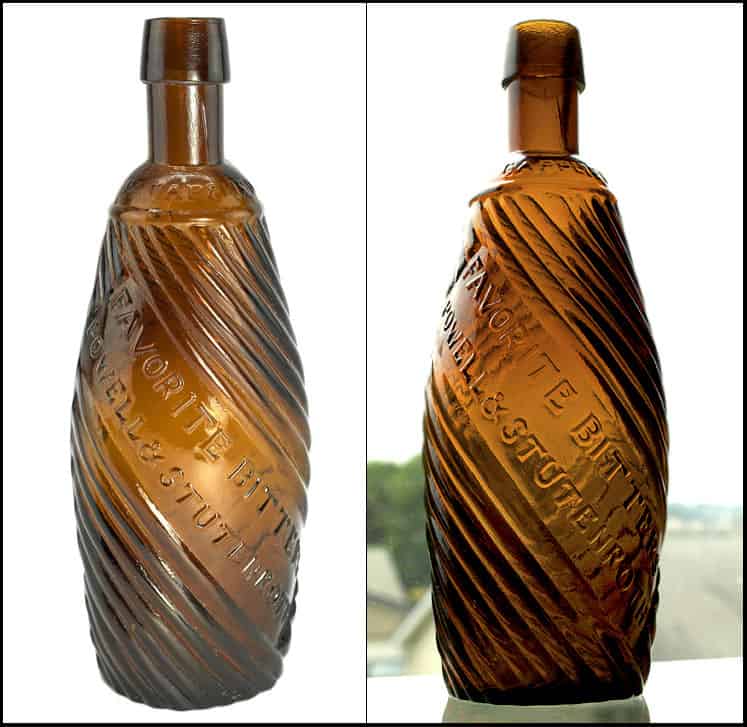 “PATENT APPLIED FOR / FAVORITE BITTERS / POWELL & STUTENROTH”, (Ring/Ham, F-6), Illinois, ca. 1868 – 1875, amber barrel, 9 1/8”h, smooth base, applied tapered collar mouth. Perfect condition. Morris Powell and Charles Stutenroth were in Naperville, Illinois. Of the two “Favorite Bitters” barrels this is the earlier one. After the patent was received a new mold was made to include the word Peoples. Both bottles are extremely rare making it a real challenge to own both. Purchased from Glass Works Auctions, ‘The Dr. Burton Spiller Collection’, in 2000. – Glass Works Auctions – Bob Ferraro Collection – Part 2 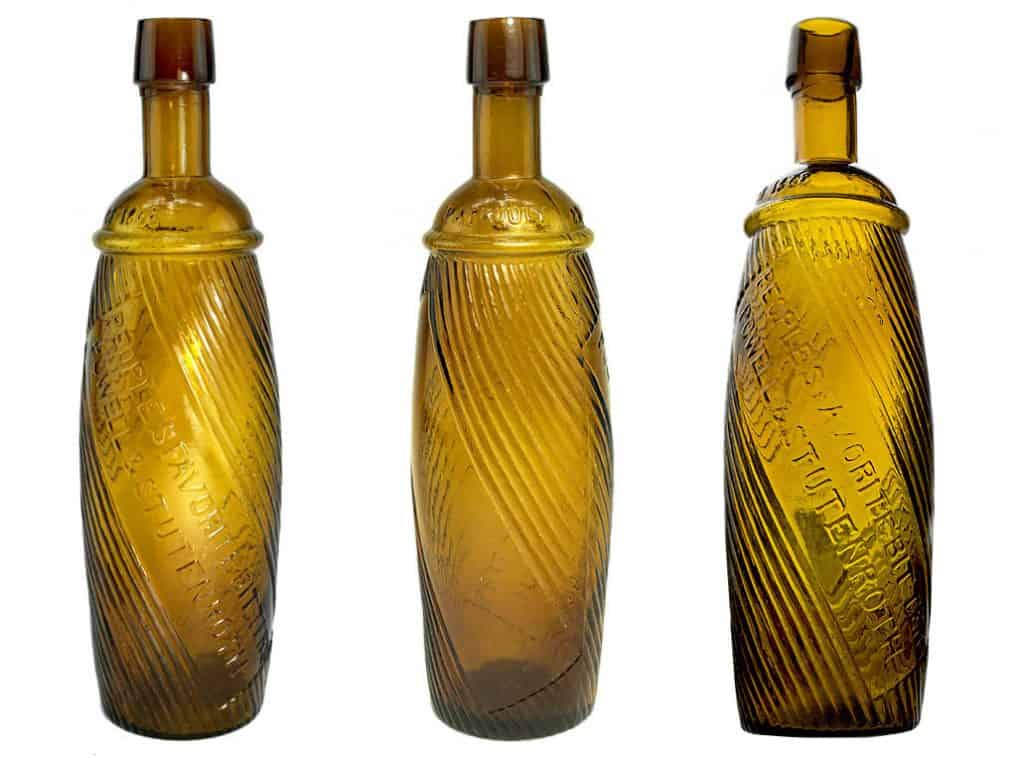 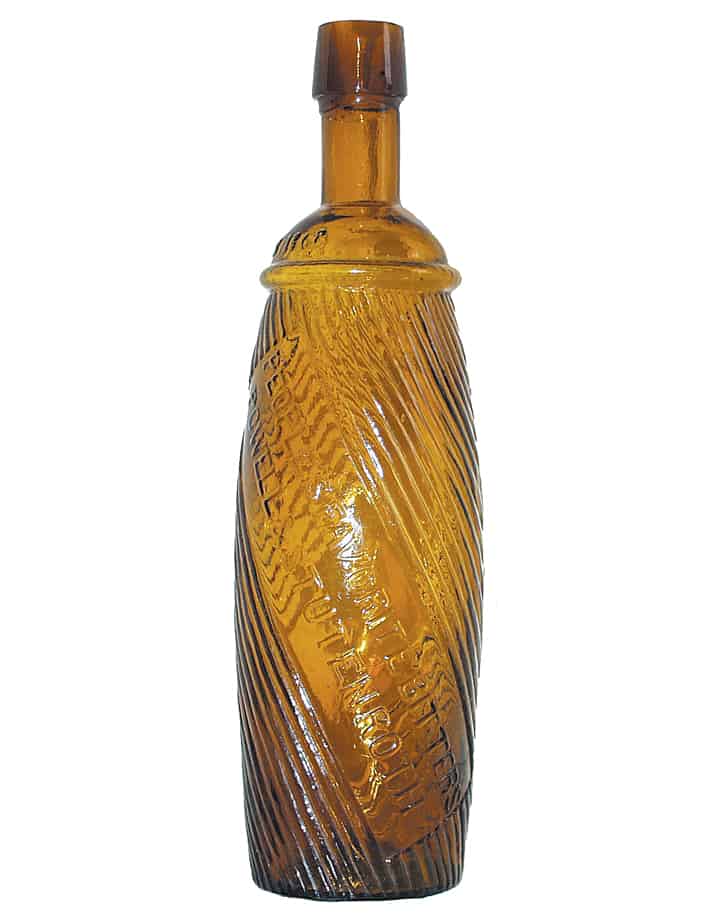 [Glass Works Auctions] Newspaper advertisement – April 21, 1869 A medicine so potent, palatable and pure that wherever known it becomes at once the Favorite of the people. In all cases of Dyspepsia, Liver Complaint, Headache, Loss of Appetite, Humors in the Blood, Blotches and Pimples on the Face, Weakness of the Kidneys, General Debility, Nervous Complaints, Impurities of the Blood, Chills, Fevers, and Diarrhea, The People’s Favorite Bitters should be used. The unimpeachable testimony of ladies, farmers, mechanics, commercial and professional men who have practically tested the mixture of The People’s Favorite Bitters, prove it to be beyond question, the best medicinal compound for the above diseases now offered to the public. If a reasonable attention to diet be given, and The People’s Favorite Bitters be taken strictly according to the directions, and no relief obtained in any or all the ills mentioned above, THE PRICE OF THE BITTERS WILL BE REFUNDED by the proprietors, or any of their authorized agents. The reason The People’s Favorite Bitters have met with much unprecedented success, and are now so generally and highly esteemed, is because they ASSIST nature, instead of exhausting her; they give tone to the stomach and the digestive organs, enrich the blood, and tend to build up rather than tear down; in short, they import vigor to the entire frame, and help the system to throw off disease. The following are the ingredients of The People’s Favorite Bitters: Sarsaparilla, Dandelion, Wild Cherry, Buchu, Cubeba, Orange Peel, Anise, Gentian, Columbo and Sassafras. Any one, at all acquainted with medicines, will know at once that no better or more wholesome Bitters could be made. One trial will convince the most skeptical that The People’s Favorite Bitters are all that they are recommended. For LADIES they are excellent; for TRAVELERS invaluable; for mechanics, farmers, persons of sedentary habits, for professional men, overtaxing the brain at the expense of the body, The People’s Favorite Bitters are a necessity. During sudden changes in the weather, in time of general sickness, these Bitters can be taken with advantage. At any time they are useful, and should be constantly on hand. If you want to save money, preserve your health, do the most good, and get the greatest happiness, use The People’s Favorite Bitters. Price, $1.00 per Bottle. POWELL & STUTENROTH, Proprietors and Manufacturers, Naperville, ILL. Powell & Stutenroth’s Favorite Bitters 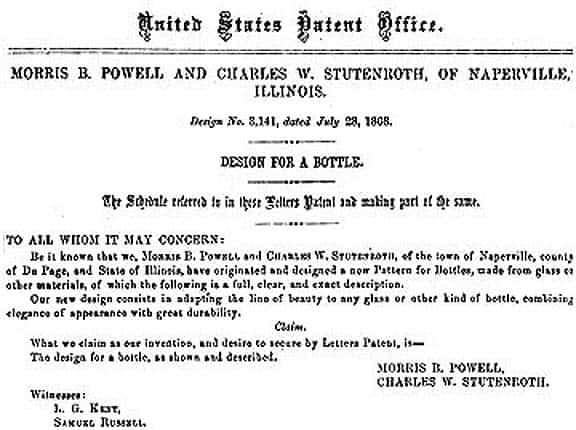 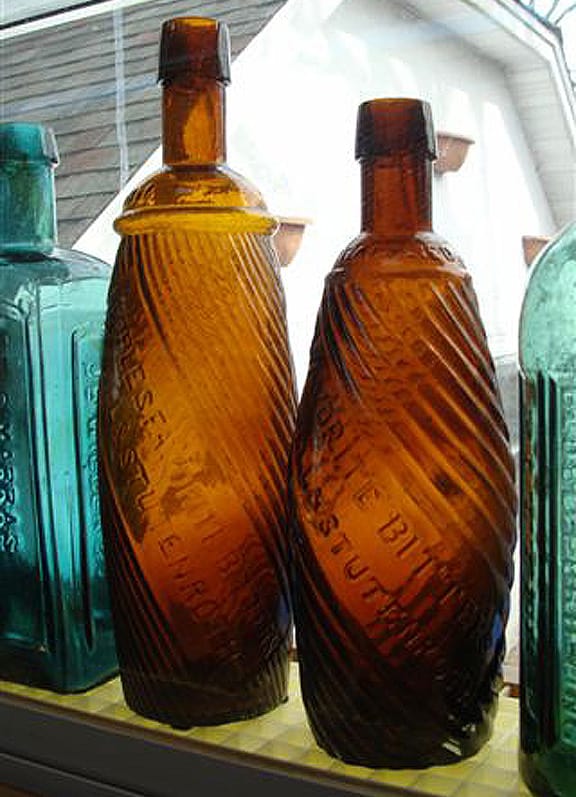 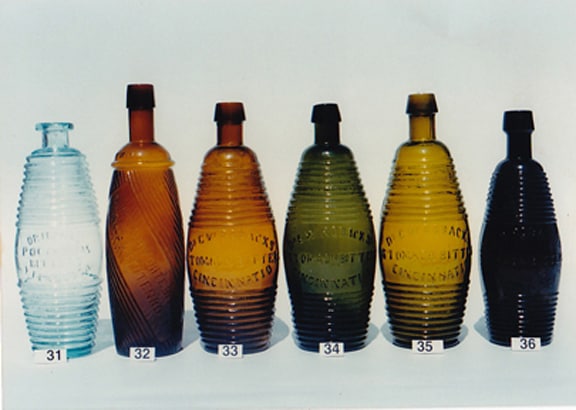 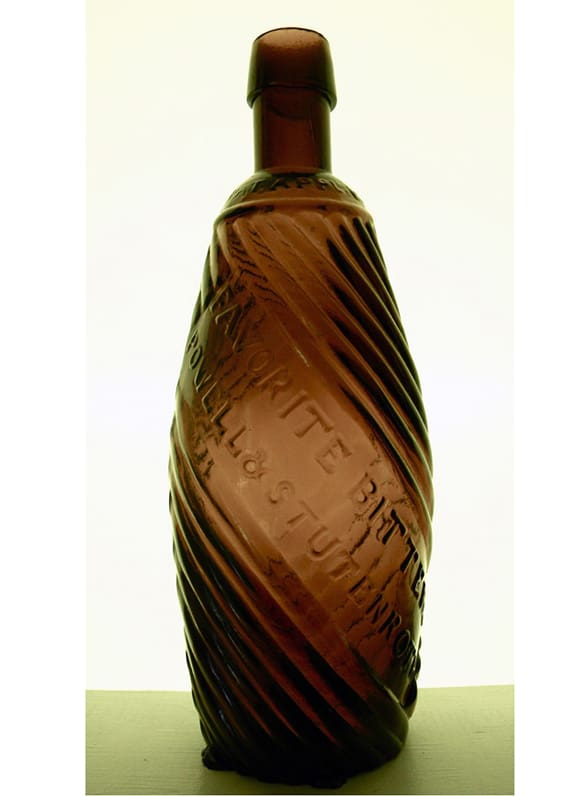 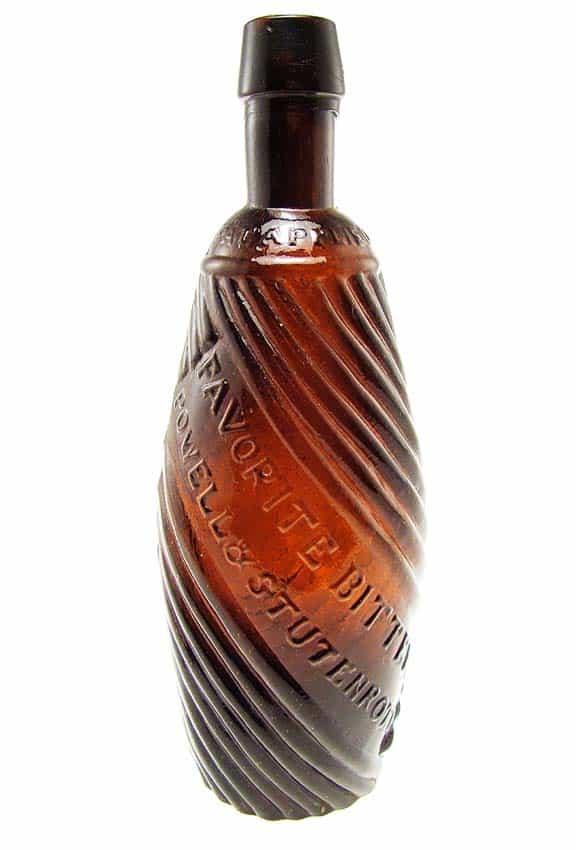 A Powell & Stutenroth “Favorite Bitters” bottle, one of only a few known and graded 9.7 out of 10 for condition, soared to $64,960 at the 50th Internet and catalog ever held by American Bottle Auctions. The bottle was the top lot of the more than 300 rare and vintage bottles sold. Most dated from the mid-to-late 19th century.

Ferdinand Meyer V is a native of Baltimore, Maryland and has a BFA in Fine Art and Graphic Design from the Kansas City Art Institute and School of Design. Ferdinand is the founding Principal of FMG Design, a nationally recognized design consultation firm. Ferdinand is a passionate collector of American historical glass specializing in bitters bottles, color runs and related classic figural bottles. He is married to Elizabeth Jane Meyer and lives in Houston, Texas with their daughter and three wonderful grandchildren. The Meyers are also very involved in Quarter Horses, antiques and early United States postage stamps. Ferdinand is the past 6-year President of the Federation of Historical Bottle Collectors and is one of the founding members of the FOHBC Virtual Museum.
View all posts by Ferdinand Meyer V →
This entry was posted in Bitters, Collectors & Collections, Figural Bottles and tagged Barrel, bitters, Bob Ferraro, Charles W. Stutenroth, Favorite Bitters, Figural, illinois, John Feldmann, Morris B. Powell, naperville, Peoples Favorite Bitters, Tony Shank. Bookmark the permalink.