Jeff Wichmann recently sold an excellent example of a Mill’s Bitters lady’s leg figural over at his newly formed American Bottle Auctions For Sale page. You don’t see or read about these too often. I wonder why? The top picture is from a past Glass Works Auctions event. Jeff Wichmann his bottle up as follows:

Mills’ Bitters (M-93). Applied band, smooth base. These western bitters are one of the few lady’s leg bottles produced for the west. Gilman having wholesale liquor dealing in his blood came from Louisville to work with a Cincinnati firm selling the Mill’s Bitters.  It’s not known where these bottles were made, a number of them have been found in Arizona. They are almost always stained and need cleaning is as the case with this one. By 1880, P.J. Cassin purchased the rights to the brand and had a sample made with his name on it. This is another cleaned version and overall it came out nicely in a light yellow which most of them are. There is a small abrasion on the applied band, we’ve been told it is an in-making flaw, please check pictures. It also has a scratch or two but we’d grade this a 9 without the lip distraction. Perfectly presentable, the Mill’s Bitters aren’t offered very often and this is about as good as they get. Made in 1874 only.

Here are a few of Jeff’s pictures: 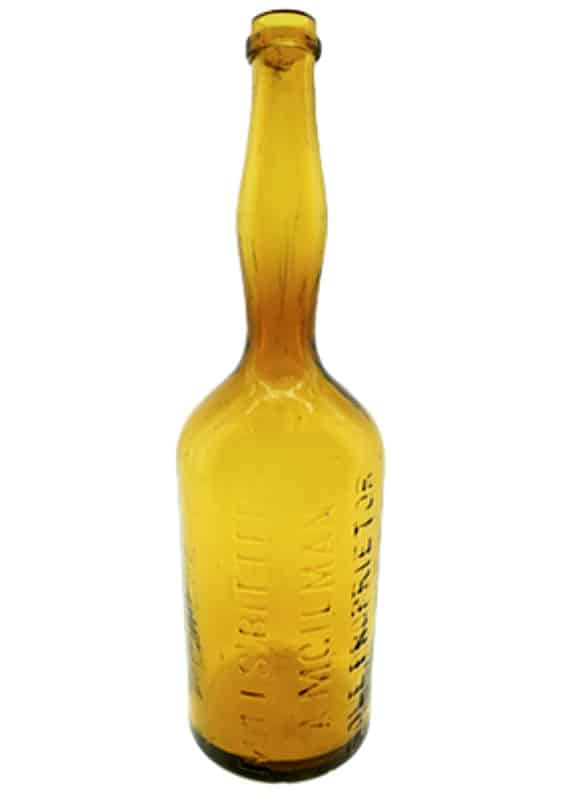 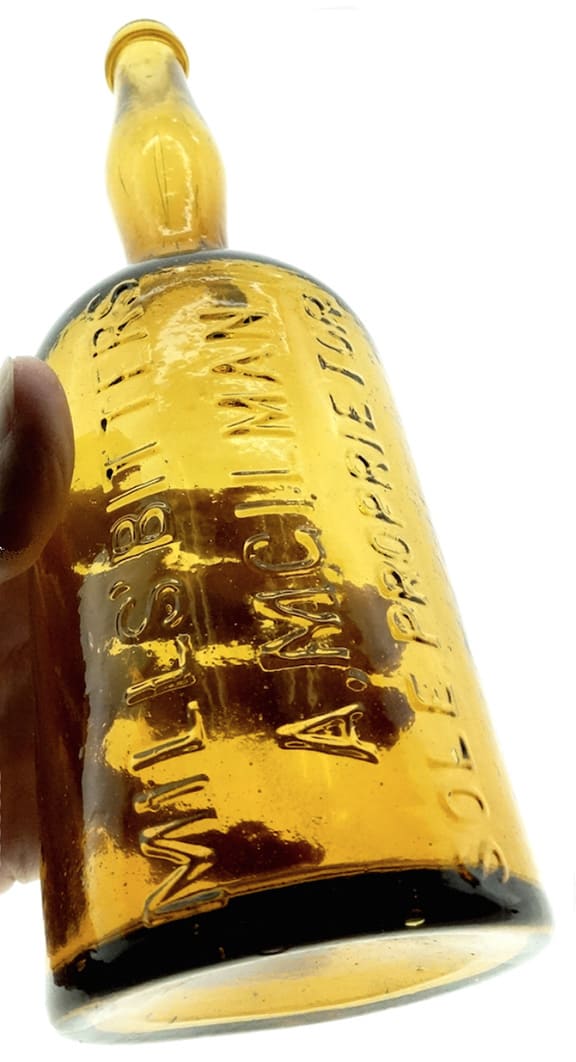 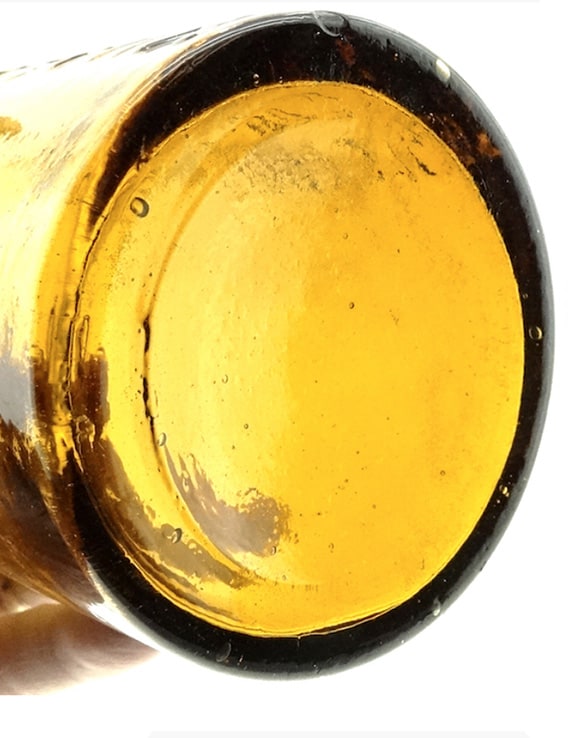 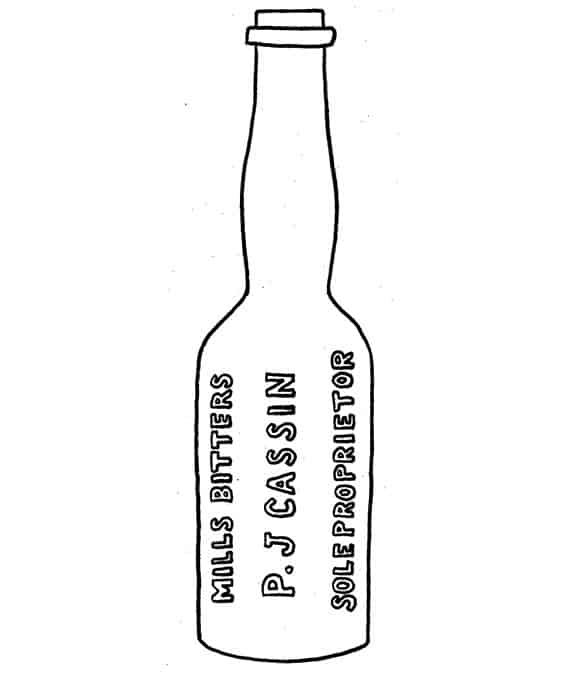 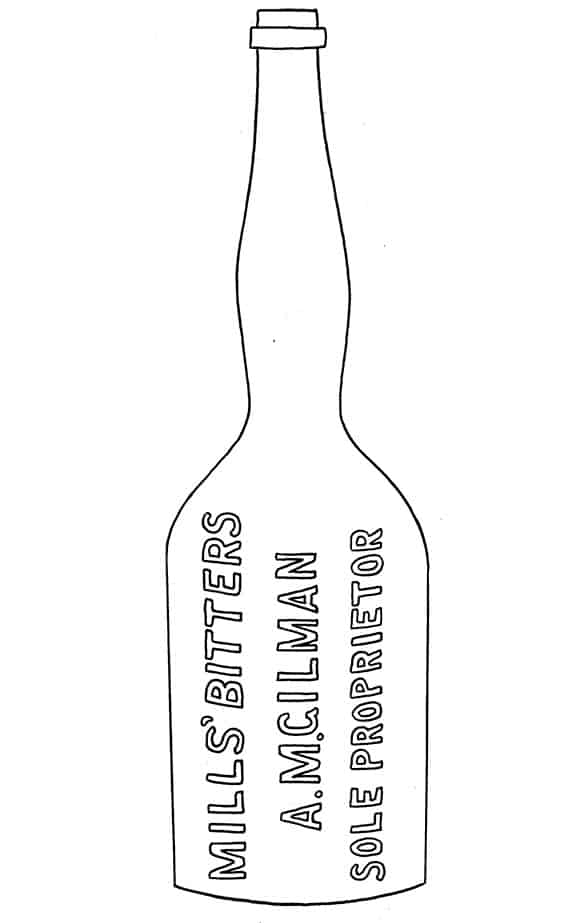 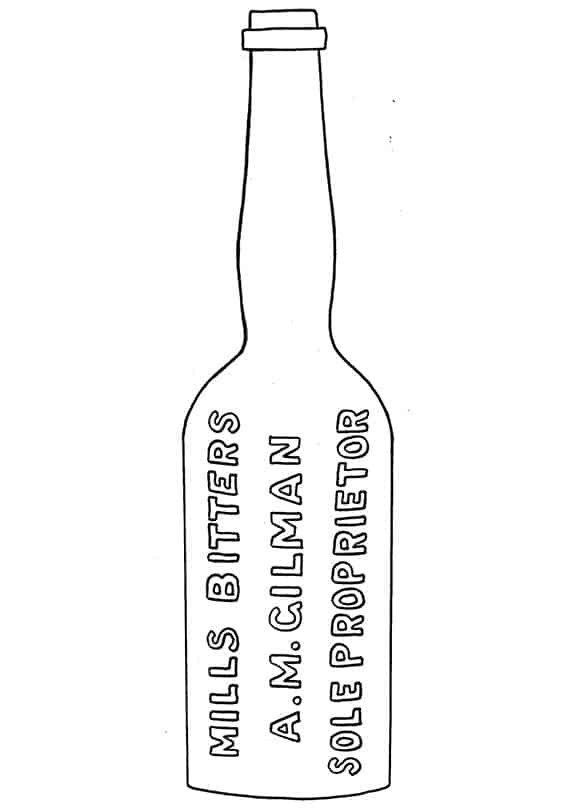 Jeff said in his bottle description that the bottle was “made in 1874 only” and “Gilman having wholesale liquor dealing in his blood came from Louisville to work with a Cincinnati firm selling the Mill’s Bitters. It’s not known where these bottles were made, a number of them have been found in Arizona”.

What is exciting here is the advertisement below from a Houston newspaper in 1860. “Just received, 150 CASES MILLS BITTERS.” The merchant was H. J. Trube at the corner of Franklin and Travis Streets. A few blocks from where I sit right now. Fascinating, I tell ya’. Obviously someone was making this bitters in the late 1850s at least. Maybe A. M. Gilman or probably Mills himself, whoever that is. There were a lot of bitters coming in to Houston in a big way during this time period. Many from Louisville and Cincinnati as you can see from the previous posts below. I bet this bottle was made and sold there though A. M. Gilman is typically listed in San Francisco from 1862 to 1878 or so. 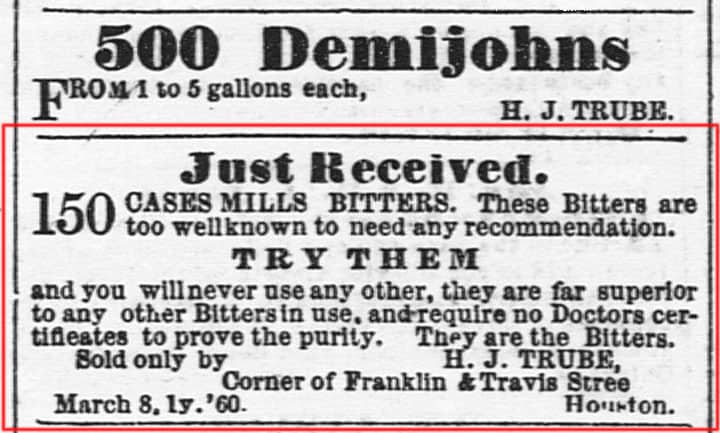 Uh Oh, here is a problem. The clipping below says that A, M. Gilman has failed in his liquor dealing business in 1862 in San Francisco.

Here A. M. Gilman resurfaces selling Champagnes in a big way in 1874, addressing at 308 California Street in San Francisco. No mention of Mills Bitters. Odd. Looking more like the A. M. Gilman Mills’ Bitters was made from about 1858 to 1862. Not so fast. 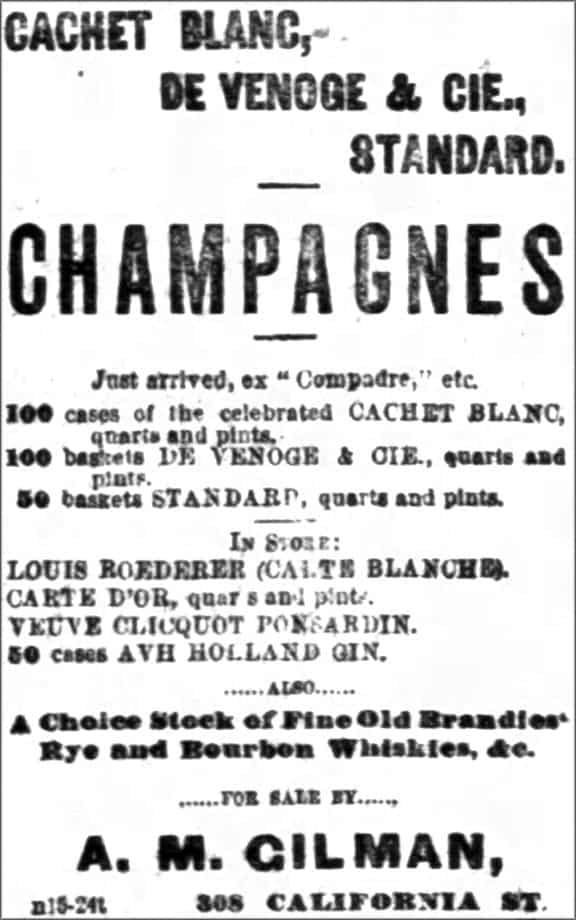 Here is an advertising envelope cover and letterhead top (pictured below) from A. M. Gilman, Importer of Wines & Liquors, Sole Agent for Mills Bitters. He is at 308 California Street in San Francisco. The date is 1878. Mills Bitters has resurfaced. This is probably the subject lady’s leg bottle. So what was sold in Houston? It was probably pontiled and there are shards or full examples well hidden in the ground beneath me, I bet. Probably says Mills Bitters, maybe without the A. M. Gilman name. 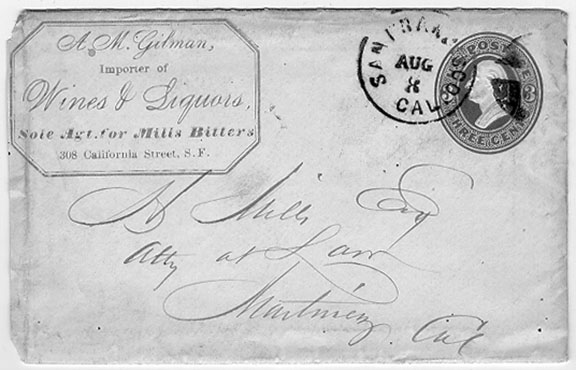 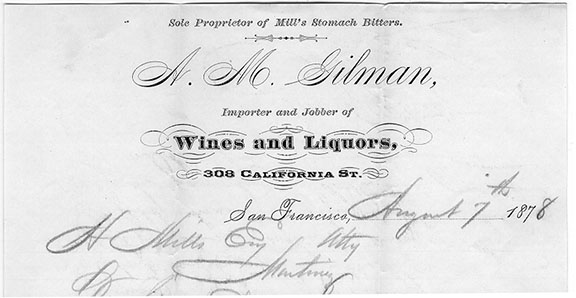 Here is another 1878 clipping noting a Mills’ Celebrated Aromatic Stomach Bitters. This 1878 date is looking more appealing as the date for this bottle. 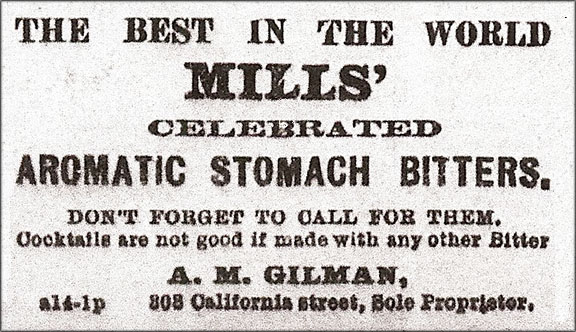 As reported in Bitters Bottles, P. J. Cassin takes over the brand and renames it Cassin’s Mills Bitters. This would be the M 92 example from Bitters Bottles drawn above. Bitters collectors know about Cassin and maybe his great looking bitters bottle. Certainly has that ‘French’ look. 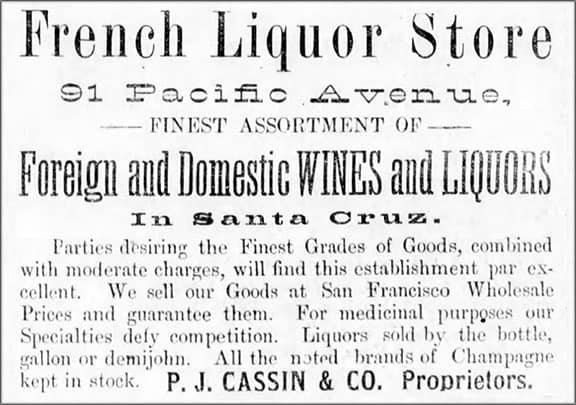 I am only guessing now, but maybe A. M. Gilman worked for the Mills Brothers in Cincinnati. They made the Morning Call Bitters. Possibly he brought the brand to San Francisco in 1859 or so. In 1864, A. M. Gilman is listed as selling patent medicines at 409 Front Street in San Francisco. Another possibility was that Gilman was never in Louisville or Cincinnati. I certainly can not find him in a directory. There is alot still on the table here.

Ferdinand Meyer V is a native of Baltimore, Maryland and has a BFA in Fine Art and Graphic Design from the Kansas City Art Institute and School of Design. Ferdinand is the founding Principal of FMG Design, a nationally recognized design consultation firm. Ferdinand is a passionate collector of American historical glass specializing in bitters bottles, color runs and related classic figural bottles. He is married to Elizabeth Jane Meyer and lives in Houston, Texas with their daughter and three wonderful grandchildren. The Meyers are also very involved in Quarter Horses, antiques and early United States postage stamps. Ferdinand is the past 6-year President of the Federation of Historical Bottle Collectors and is one of the founding members of the FOHBC Virtual Museum.
View all posts by Ferdinand Meyer V →
This entry was posted in Advertising, Bitters, Figural Bottles, Liquor Merchant, Medicines & Cures and tagged california, Cassin, Cincinnati, Figural, Gilman, lady's, leg, Mills, San Francisco, Trube, Wichmann. Bookmark the permalink.