In picking up the figural bitters lady’s leg series again with the fabulous Universe Bitters and Shurtleff’s Bitters posts, I thought it would be neat to follow up with Julien’s Imperial Aromatic Bitters and look at two of the most exciting variants of the same brand that you will ever see. First of all, let’s look at the Carlyn Ring and W. C. Ham listings in Bitters Bottles and Bitters Bottles Supplement: 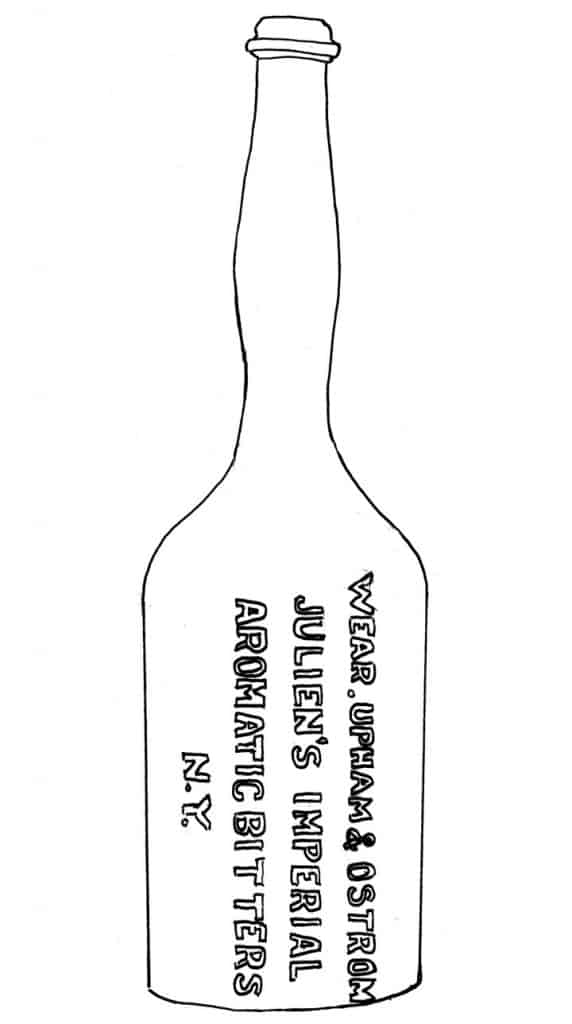 *Top picture and bottle sketch from both Bitters Bottles books courtesy of Bill Ham. Below examples from Jeff Burkardt. 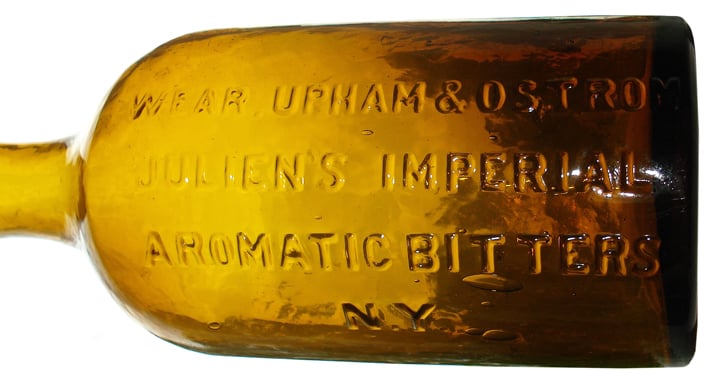 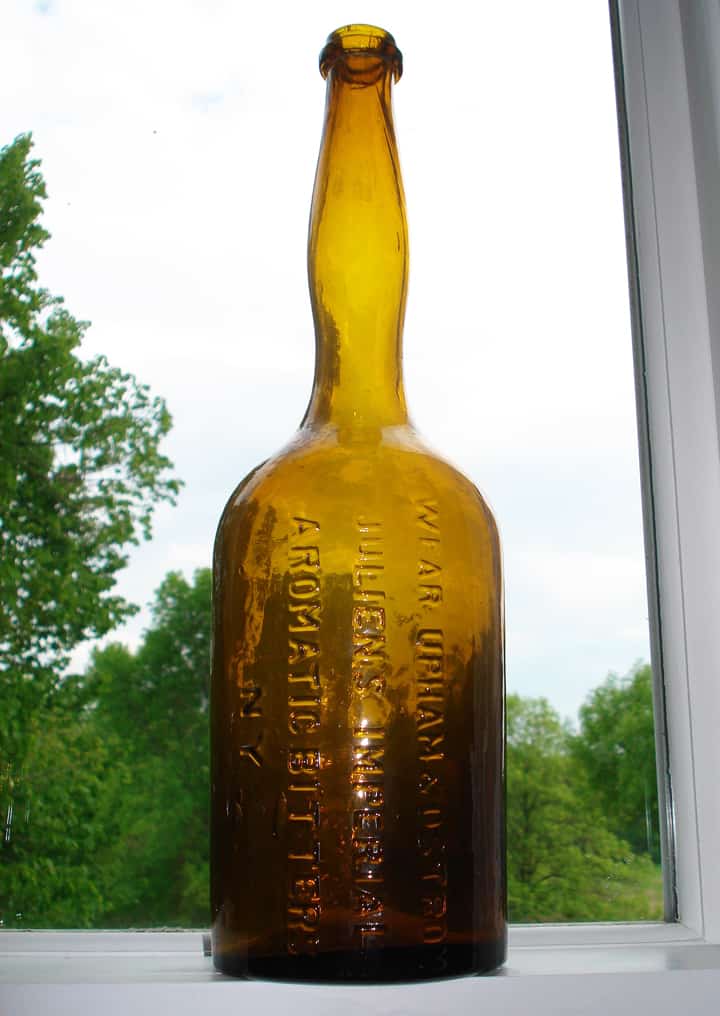 This is a tough safe to crack as there are few clues and little information on “Julien” or “Ware, Upham & Ostrom” in New York which is embossed on one or both of the bottles. I could not find any advertising, trade cards or stories to build a post. As noted in Ring & Ham, variant #1, J 56.5 read’s “Julien’s Imperial Aromatic Bitters” with a faint ghosting where “Ware, Upham & Ostrom” once was. Variant #2, J 57, reads, “Julien’s Imperial Aromatic Bitters” with “Ware, Upham & Ostrom”. You can see both examples in the picture at the top of the post. Only a few examples reside in collections. I have seen three firsthand myself but do not have an example gracing my shelves.

It is interesting to note that both variant listings in Ring & Ham mention that a bottle was found in Connecticut and one was dug in Connecticut. With  “N. Y.” embossed on the bottle, this makes sense. A search of Connecticut and select New England cities reveal no hits for “Julien” or “Wear, Upham & Ostrom”, as these are rather unique names as “Wear” is usually spelled “Ware”.

I finally find “Wear, Upham and Ostrom” right where they are supposed to be in New York City in 1869 and 1870. They are listed as selling “essences” of all things.

Going on a hunch, I search the name “Julien” for the same years. “Julien” is also spelled different as most versions are “Julian” with an “a”. Another hit with Alexis A. Julien who was a very young chemist at the time. Actually, he was quite famous.

Alexis Anastay Julien (13 February 1840 – 7 May 1919) was an American geologist who taught at Columbia University’s School of Mines for many years. Julien was born in New York City. He graduated from Union College in 1859, but continued as a student in the chemical laboratory a year longer. In 1860 he went to the guano island of Sombrero as resident chemist, and continued there until 1864, also making studies of its geology and natural history, especially of its birds and land shells. He sent his collections to the Smithsonian Institution, for which he also made meteorological observations, this island being the most southerly under its direction. In 1862 he made a geological survey of the islets around St. Bartholomew for the Swedish government, receiving in recognition of his services a gold medal from the king of Sweden.

Soon after the establishment of the Columbia School of Mines he became the assistant in charge of the quantitative laboratory, and in 1885 he was appointed instructor in charge of the department of microscopy and biology in the same institution. He was connected with the Michigan Geological Survey in 1872, making a special study of the crystalline rocks and ores of the Marquette district, and his lithological reports appear in the published volumes of the survey. In 1875 he began the study of the petrography of North Carolina for the North Carolina Geological Survey, and served for three successive summers in the field. He visited the islands of Bonaire, Curaçao and Aruba in the West Indies (1881–1882), and investigated the guano deposits and geology of these islands. The degree of Ph.D. was conferred on him in 1881 by the New York University.

He was a member of scientific societies, and was vice president of the New York Academy of Sciences in 1884. Julien was one of the founders of the New York Microscopical Society in 1880, and in 1883 was one of the originators of the Society of Naturalists of the Eastern United States. He retired from the Columbia School of Mines in 1907.

I realize it is a stretch to tie Eugene L. Wear, Edward M. Upham, Edward Ostrom and Alexis A. Julien together. It is possible that these fellows could have gone to school together, met in chemistry class while making essences and said, “let’s make a buck” so they created Julien’s Imperial Aromatic Bitters while using some of Julien’s bat guano as the main essence. This doesn’t explain the two variants, and I certainly don’t commit to a relationship here but one thing we do know for sure; these are two extremely rare bitters that were made somewhere between 1868 and 1871 in New York City. Something on my wish list.

Ferdinand Meyer V is a native of Baltimore, Maryland and has a BFA in Fine Art and Graphic Design from the Kansas City Art Institute and School of Design. Ferdinand is the founding Principal of FMG Design, a nationally recognized design consultation firm. Ferdinand is a passionate collector of American historical glass specializing in bitters bottles, color runs and related classic figural bottles. He is married to Elizabeth Jane Meyer and lives in Houston, Texas with their daughter and three wonderful grandchildren. The Meyers are also very involved in Quarter Horses, antiques and early United States postage stamps. Ferdinand is the past 6-year President of the Federation of Historical Bottle Collectors and is one of the founding members of the FOHBC Virtual Museum.
View all posts by Ferdinand Meyer V →
This entry was posted in Bitters, Figural Bottles, History, Medicines & Cures and tagged Alexis A. Julien, Aromatic, bitters, chemist, Connecticut, Edward M. Upham, Edward Ostrom, essences, Eugene L. Wear, Imperial, Julien, lady's, leg, New York, Ostrom, Upham, variant, Ware. Bookmark the permalink.