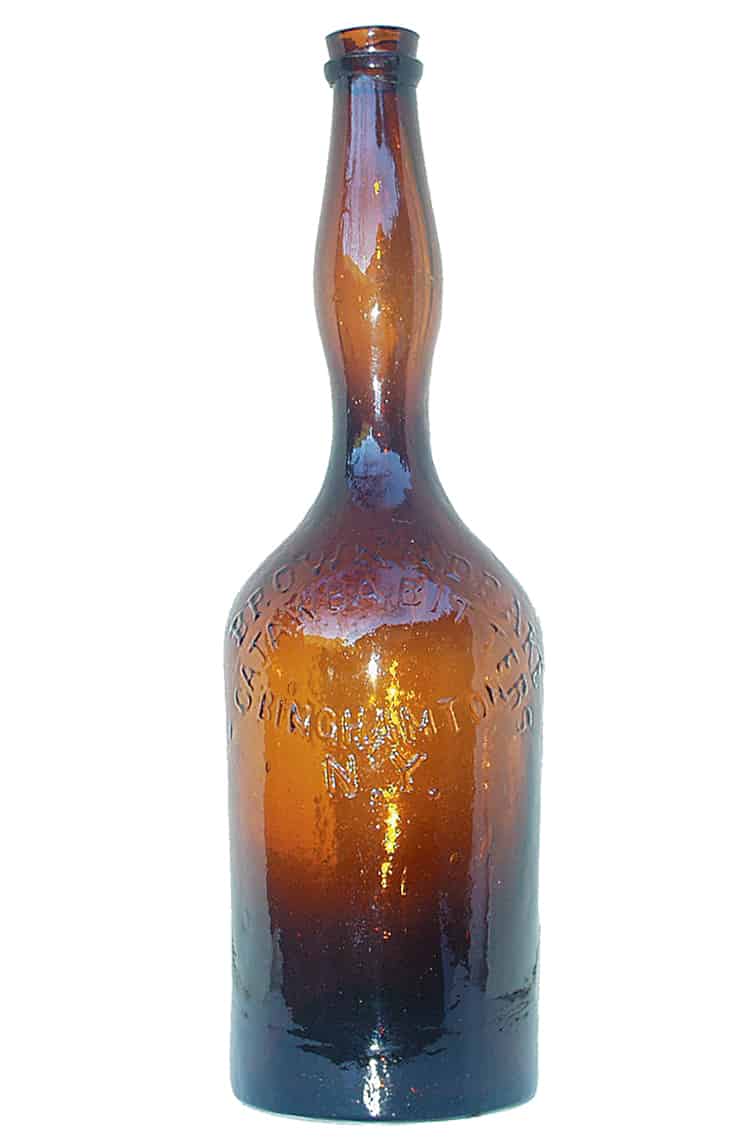 The first in the series of Lady’s Leg figural bottles is a ‘doozie’ as it is the predecessor brand to the famous Drake’s Plantation Bitters. It is even confused with the Catawba Wine Bitters embossed grapes square from Cincinnati.

The Brown & Drake Catawba Bitters, from Binghamton, New York, is one of the most desirable bitters bottles for most of us hard core collectors. I believe there are only three known examples. With history, form and character, these are great bottles. I am fortunate to have seen two personally and will not forget the experience.

We will include below, an email from Jeff Burkhardt (Cedarburg, Wisconsin) talking about his example and the story behind how it became part of his special collection. I am hoping that Jeff and another advanced figural collector Bill Taylor (Oregon) will be sharing more of their great lady’s leg bottles pictures in the future for this series. 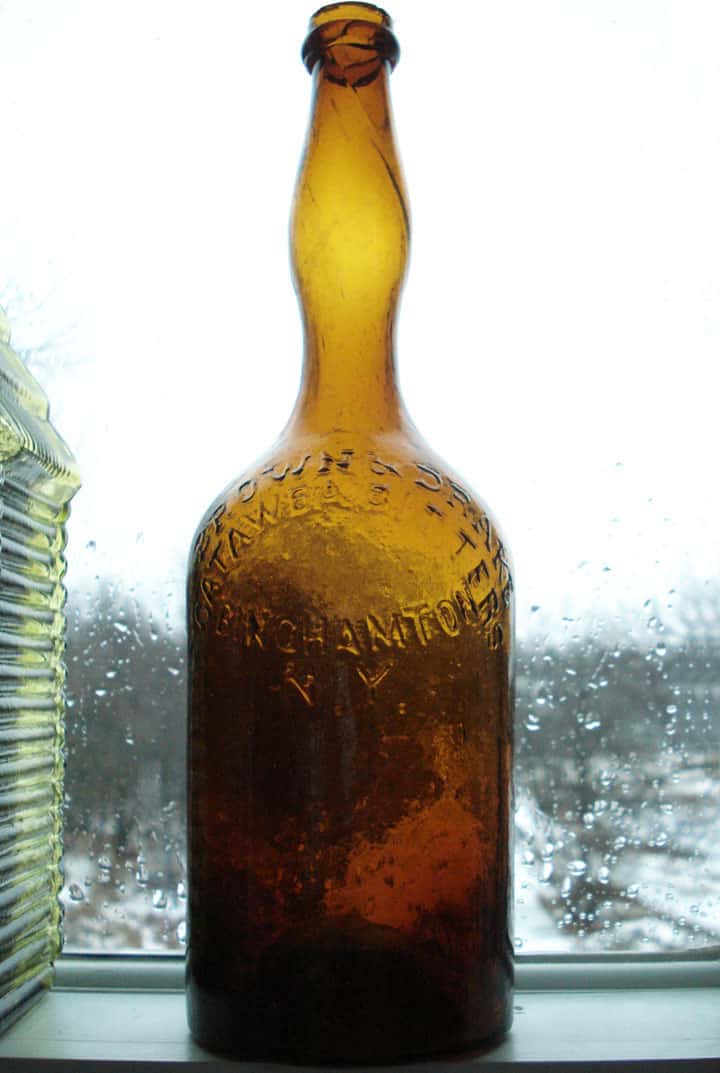 Attached you will find two pictures of my BROWN & DRAKE CATAWBA BITTERS ladies leg. It is golden-amber in the top half and a puce-red amber in the lower half.

The bottle was purchased from the late Alan Spear of Lockport, New York shortly after its “brother” was sold in the 1989 Glass Works sale of Roger Sweetland’s legendary collection of Western New York bottles. Every bottle has a story, and this pair of legs has a great one. Here’s the earlier part. 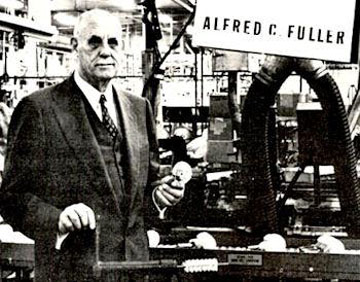 Alan delighted in telling me the story of buying a PAIR of these great rarities when he was a door-to-door FULLER BRUSH salesman (if you’re old enough to remember those products, it’s time to sell the collection!).

As Alan approached a prospective home, there they were in the window. Obviously he acquired the bottles, but I don’t know if he made a brush sale! The first and arguably best example (deep puce), went to Roger Sweetland; the second example (mine), Alan kept.

When the Sweetland collection was subsequently sold in the aforementioned Glass Works auction, Jimmy Chebalo purchased it. The hammer price was $13,000 + 10% BP = $14,300. I was the underbidder, my maximum bid of $13,000 having tied Chebalo’s. I declined going any further (by far and away the MOST I’d ever offered for any bottle), so he won the bottle. The sale price obviously convinced Spear to sell the second bottle, as I received a call from him shortly after the auction, wherein we struck a deal on it. I never did find out how Alan knew I was the underbidder.

Currently there are three examples extant. The Sweetland example now resides in a Connecticut Bitters collection. I do not know where the third example is. An extreme rarity, the bottles are very desirable for their form, iron pontils and good early character and color.

Historic significance perhaps overshadowing the glass itself, this bottle precedes the Drake’s cabin, thus it is the FIRST of a long line of the coveted and highly collectible Drake’s Plantation Bitters figural cabins. Thus it could be seen as the cornerstone of a Drakes collection; at least that’s how I view mine!

Feel free to post and use this information as you wish to further bottle and bitters collecting!

Jeff, please read the post below (link to Bill Ham visit) to see where the third example resides. 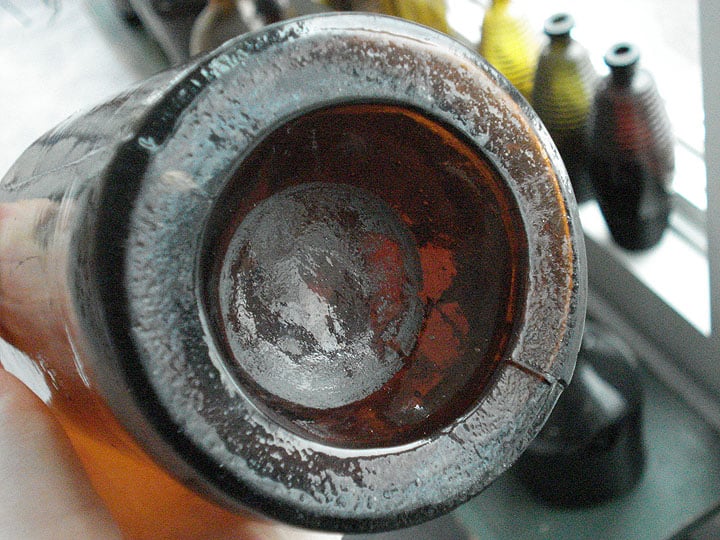 Looking at newspaper advertising, we can see that Brown & Drake’s Catawba Bitters was sold from 1858 to 1860. That’s a pretty short run. Patrick Henry Drake was the proprietor when he lived in Binghamton, New York. He was born in Ithaca, New York in 1827. This of course, is the same P.H. Drake who put out Drake’s Plantation Bitters and Sazearac Aromatic Bitters.

Drake would sell his first bitters through various agents and merchants in the region. Advertising said that the bitters was “From the juice of the Grape; designed for hotels and restaurants. The best Bar Bitters in the world.”

Interesting that the ads I found say “Prepared exclusively by Drake & Co., Binghamton, N.Y.” There is no mention of a “Brown.”

Here is an advertisement below for J.B. Brown & Co.’s Catawba Wine Bitters, Binghamton, N.Y., in April 1859. This would most likely be the Brown in the name. Looking in the Binghamton directory in 1860, you see two other possible candidates. The first being Charles Brown who was a liquor dealer. The second possibility is T. L. Brown who was listed as a homeopathic physician.

In the mid 1800s, wine-making was in its infancy in America and there were many pioneers in grape-growing in New York, Ohio, Missouri and other States leading in a line to California. The Catawba Grape and Isabella Grapes in particular were being found to make wine that rivaled the best wines of Europe. Putting their wine or brandy in bitters was just the next step.

Read: Could this bottle be for the Celebrated Tobias’s Wine Bitters? 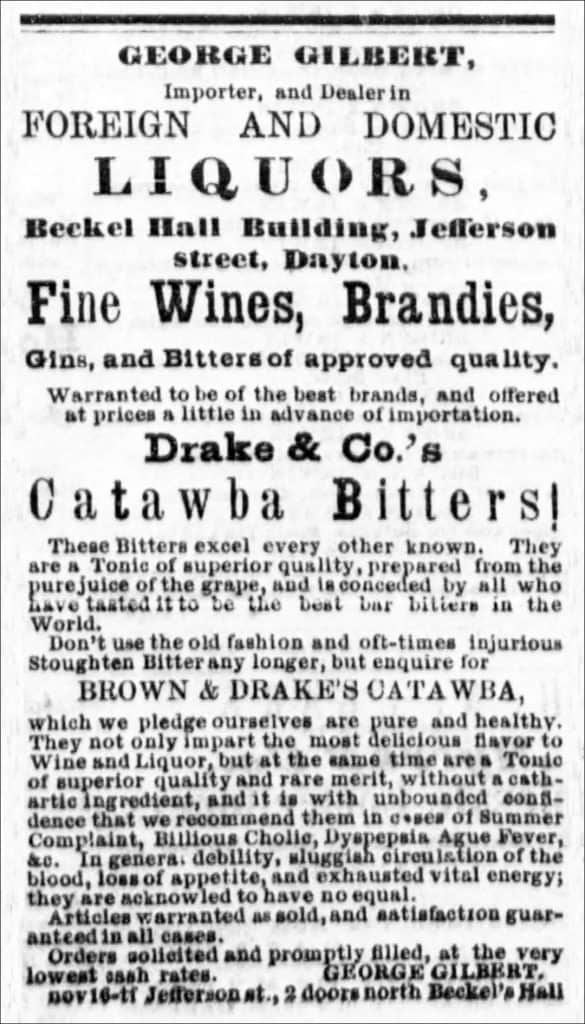 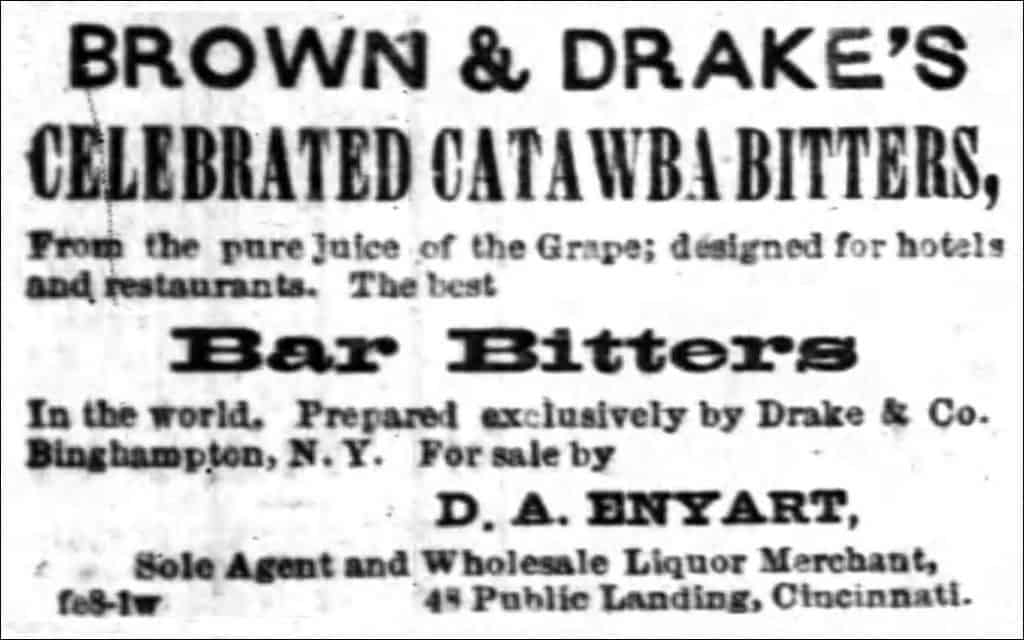