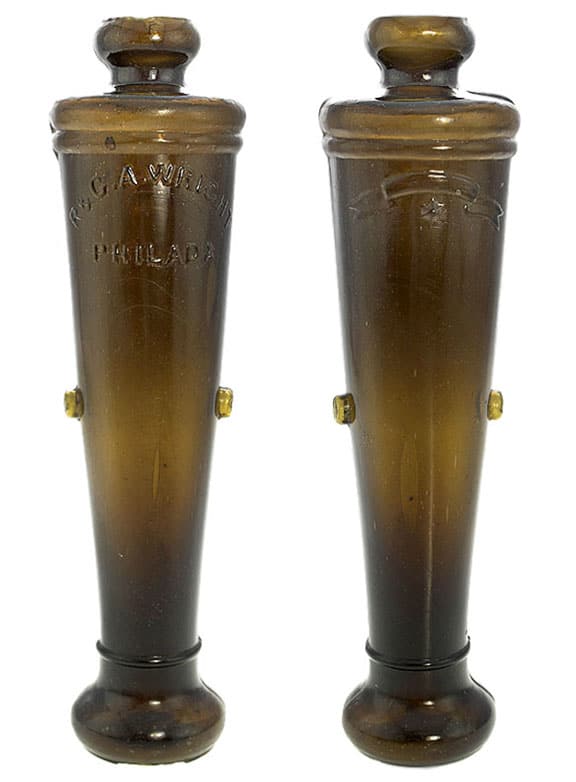 The latest addition to the figural cannon series was a tough one as this figural bottle is extremely rare and pictures difficult to come by. I saw my first example of a R. &. G. A. WRIGHT at the Norman C. Heckler– Thomas McCandless Collection auction preview (read: “R & G. A. Wright / Philada” Miniature Figural Bottle) this past October (pictured below) at the Heckler 12th Annual Columbus Day Weekend Event in Woodstock Valley, Connecticut. This was the smaller plum amethyst example that was described as follows in the Heckler McCandless auction catalog (pictured below):

“R. & G. A. WRIGHT / PHILADA.” Miniature Figural Bottle, America, 1860 – 1880. In the form of a cannon barrel, plum amethyst, tooled mouth – smooth base, ht. 6 7/8 inches. Great condition. Only one other example, that being the blue barrel in the Dr. Charles Aprill collection. Ex Gordon Bass collection auction, 1971.

Well…Charles and Jane Aprill were kind enough to provide some more pictures and information on how they obtained this bottle and the cobalt blue example (pictured below). They also added a comment and picture of the smaller, plum amethyst and cobalt blue rarities :

The story is that an Atlanta dealer, Rick Meyer, was speeding to the auction, was stopped and arrested. His one “phone call” was to the auction house. His bid of $500 won the blue cannon.

We were young collectors and did not know of this “big time” auction, but soon heard about it.

I obtained the blue cannon in 1974 from Mr. Meyer. I coveted the amethyst cannon after seeing it at McCandless’s home. I offered money, trades and the moon, but Tom and Marion loved the bottle.

I sort of liked the figural cannons and really needed the small “purple one”. Tom was older than me, I often told him that. He passed and it came to a Heckler Auction. I believe Tom would have liked the sale. I’m sure he was “watching”.

Jane and I were lucky enough to win the Amethyst cannon, and now the two are happily joined once again after 41 years. It joins a group of 18 figural cannons. 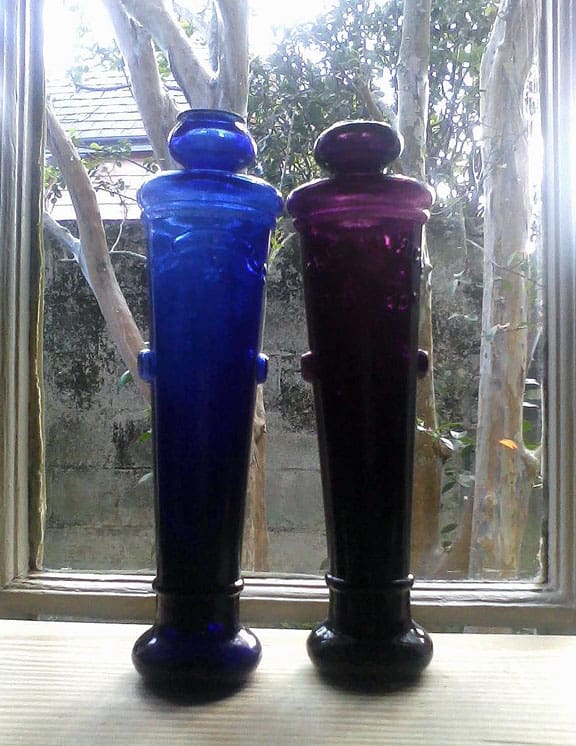 R. & G. A. WRIGHT, 7 inch figural cannons. Probably held cologne. This is the first time this pair has been together in half a century. – Aprill Collection 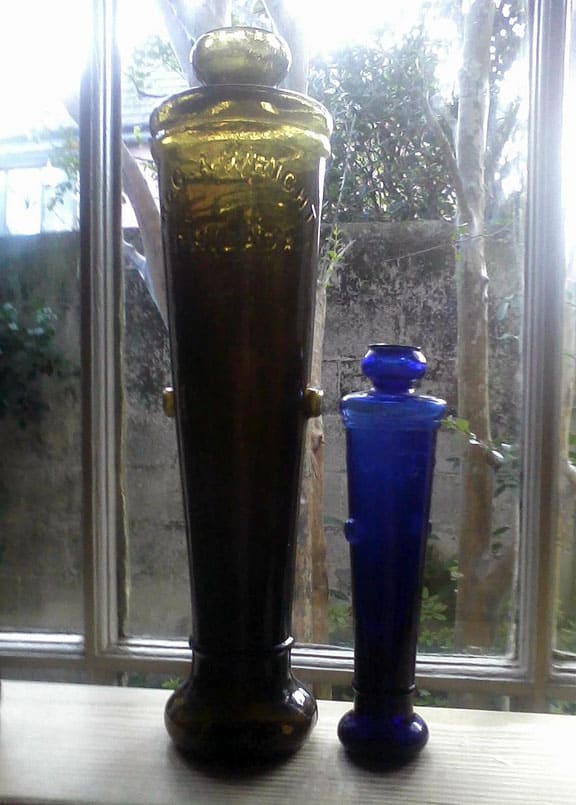 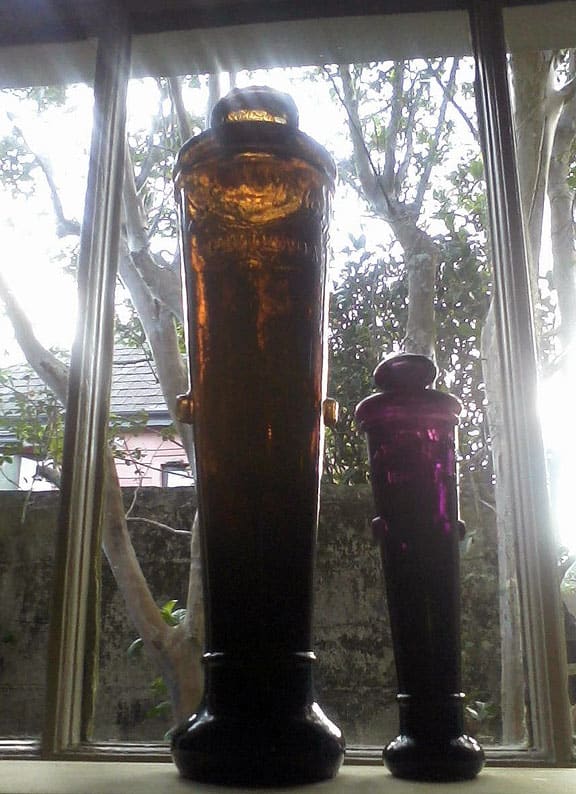 This is the amber puce and deep amethyst R. & G. A. WRIGHT figural cannons. Same measurements as the last pair. – Aprill Collection 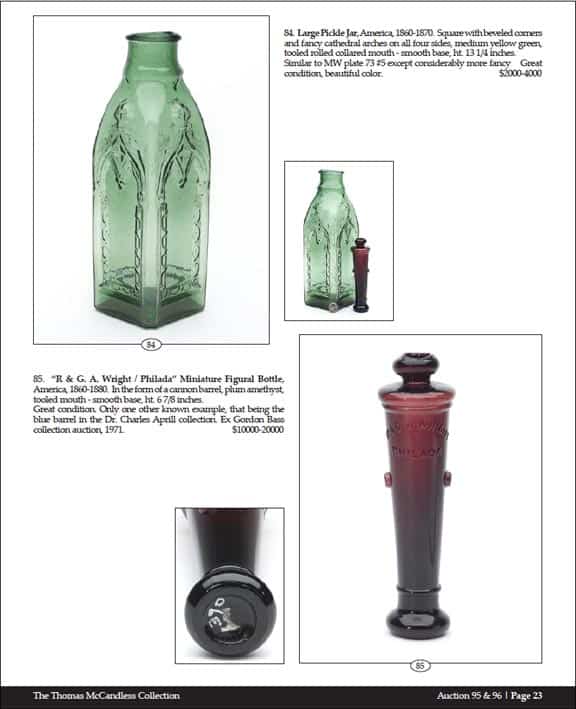 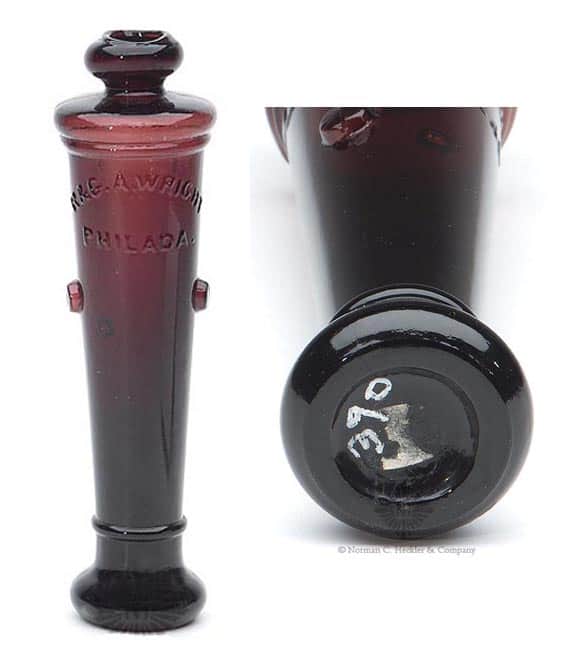 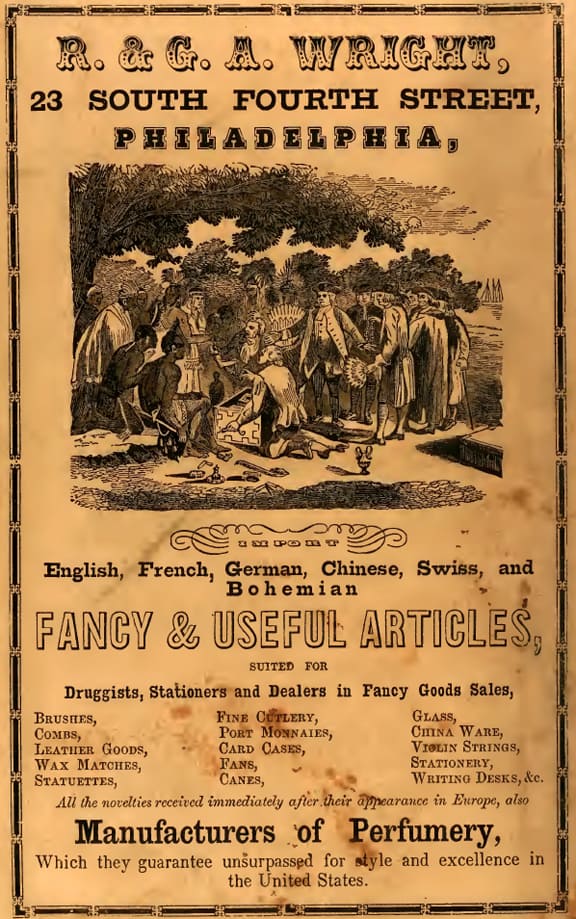 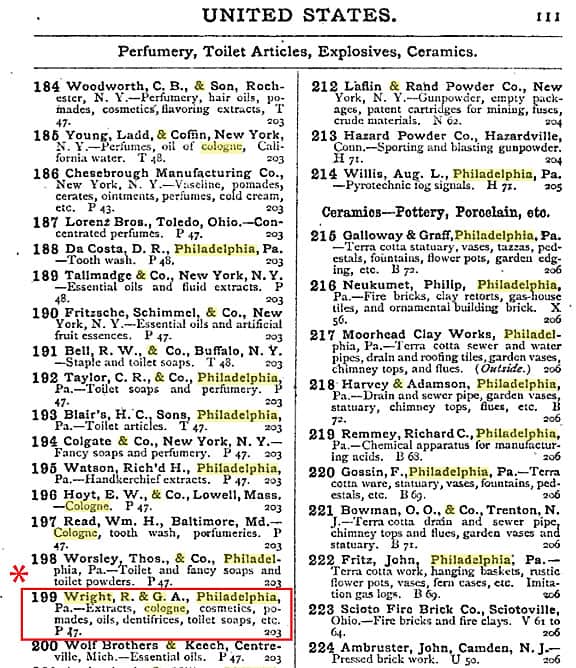 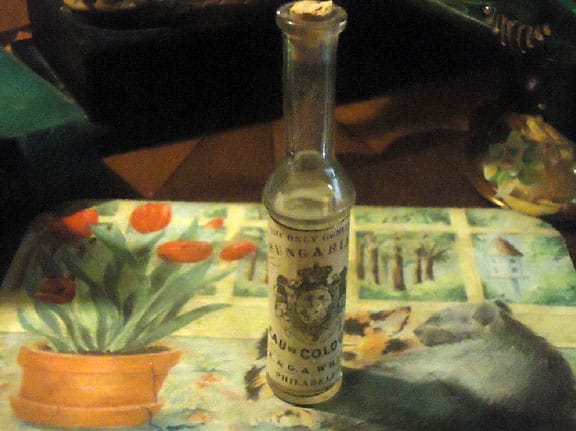 Vintage genuine Hungarian Eau De Cologne bottle Philadelphia rare! Signed R. & G. A. Wright! Says the only genuine Hungarian cologne! It measures 5 1/2 inches tall and has a cork top which is partially intact! As you can see the original label is intact!! – eBay (fleamarket_secrets)

Proceedings of the American Pharmaceutical Association noting any exhibit of Wright products, Volume 24 – 1877 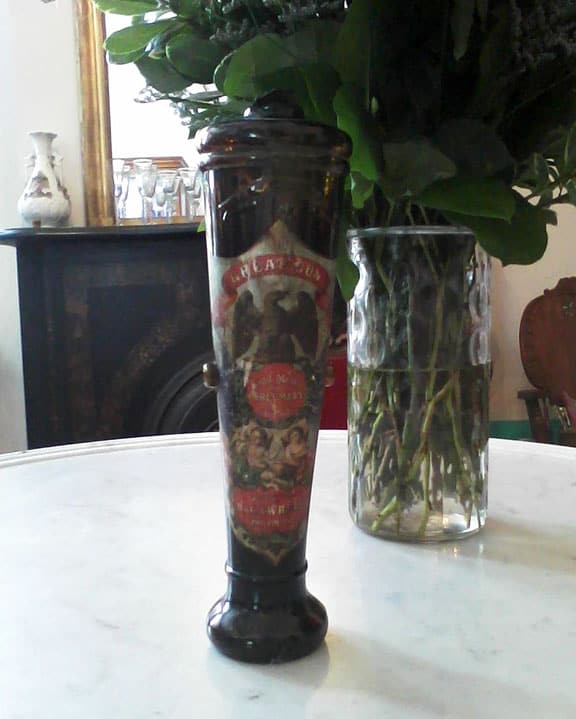 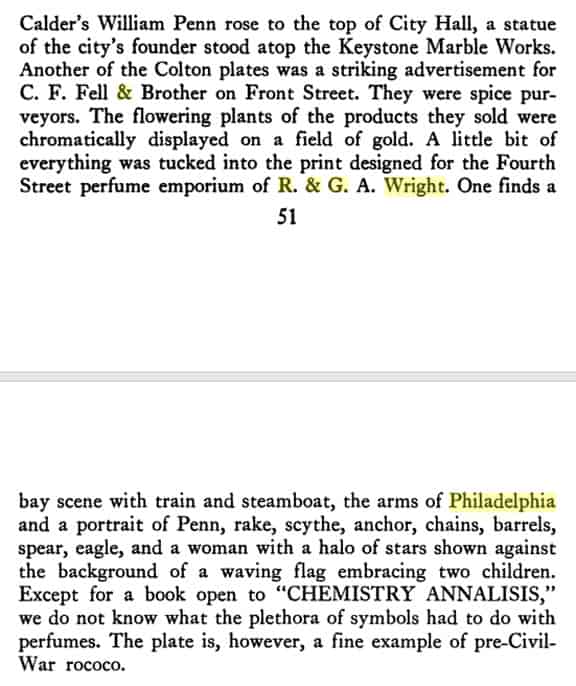 Description of an art print for the Wright emporium on Fourth Street in Philadelphia – Library Company of Philadelphia: 1981 Annual Report 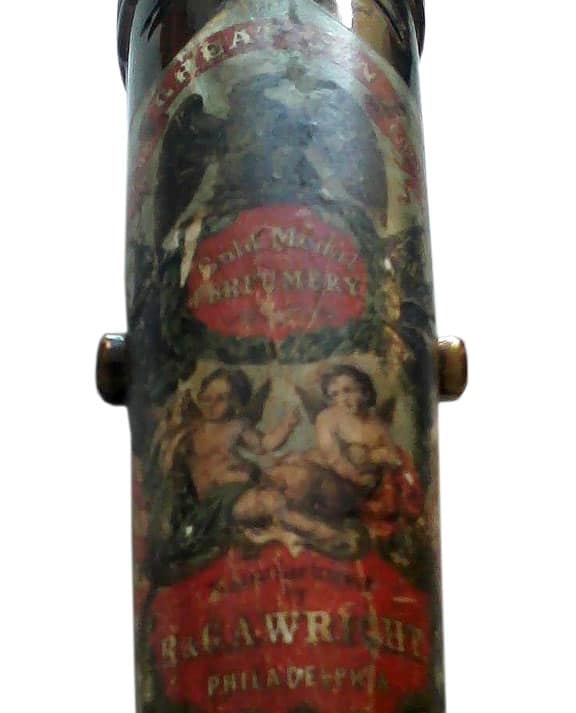 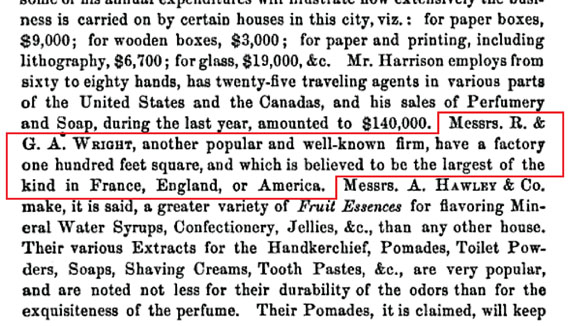 Discussion of the Wright factory size. I do not get this. 100 square feet and one of the largest factories in France, England or America! – Philadelphia and its manufactures: a hand-book exhibiting the development … by Edwin Troxell Freedley

Ferdinand Meyer V is a native of Baltimore, Maryland and has a BFA in Fine Art and Graphic Design from the Kansas City Art Institute and School of Design. Ferdinand is the founding Principal of FMG Design, a nationally recognized design consultation firm. Ferdinand is a passionate collector of American historical glass specializing in bitters bottles, color runs and related classic figural bottles. He is married to Elizabeth Jane Meyer and lives in Houston, Texas with their daughter and three wonderful grandchildren. The Meyers are also very involved in Quarter Horses, antiques and early United States postage stamps. Ferdinand is the past 6-year President of the Federation of Historical Bottle Collectors and is one of the founding members of the FOHBC Virtual Museum.
View all posts by Ferdinand Meyer V →
This entry was posted in Collectors & Collections, Cologne, Color Runs, Figural Bottles, Perfume and tagged Cannon, Charles Aprill, cologne, Figural, Gordon Bass, great, gun, Jane Aprill, Philadelphia, R & G A Wright, Rick Meyer, Skinners, Tom McCandless, Wright. Bookmark the permalink.