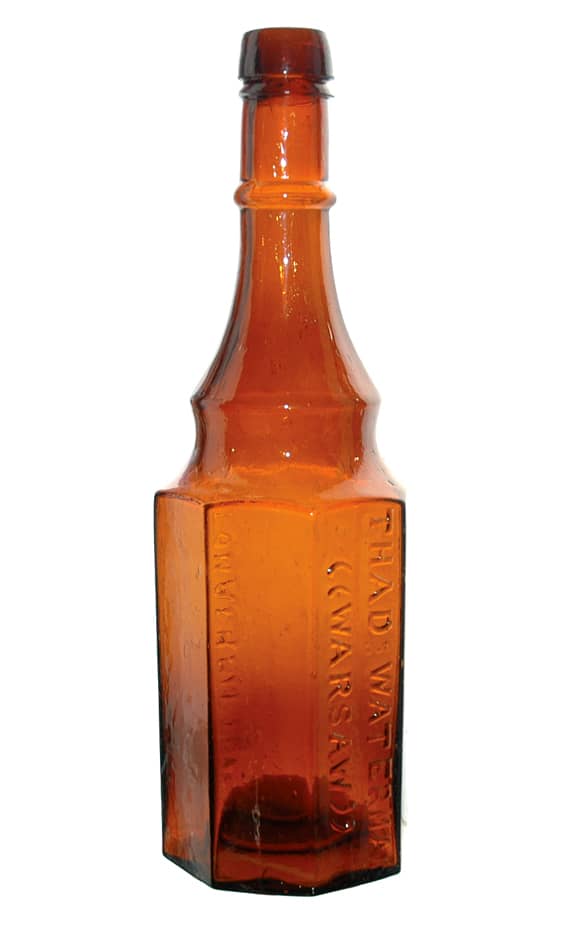 Today I add the next bottle to my series of Figural Cannon Barrels or Transitional Cannon Barrels that are thought by some to be reminiscent of other forms such as Lighthouses or Bells. It is tough to say exactly what the bottle designer or client had in mind when making the Warsaw Stomach Bitters without documentary proof such as the patent drawing, label and/or advertising for the subject bottle. Like I said previously with the Castilian Bitters and the Brown’s Castilian, I group these types of bottles together in my collection and call them Transitional Cannon Barrels. See new information below documenting that this product is from New Orleans.

Bottle has a “steep roof” because the Polish population which centered in Chicago had houses with steep roofs so snow would not stick. 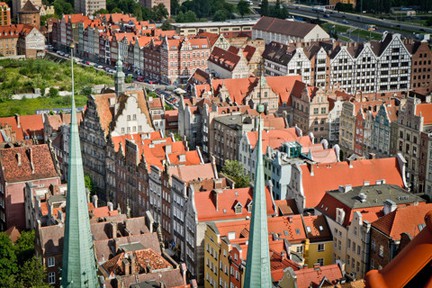 I can find very little information on this bottle other than what is printed in Carlyn Ring and W.C. Ham Bitters Bottles. What they note actually adds to the mystery when they say “Bottle has a “steep roof” because the Polish population which centered in Chicago had houses with steep roofs so snow would not stick”. Where did Chicago come from? Polish too? The “WARSAW” name leads us there but why is “WARSAW” with quotation marks?R/H also says an example was found at the mouth of the Mississippi River. Wow.

Example found at the mouth of the Mississippi River. 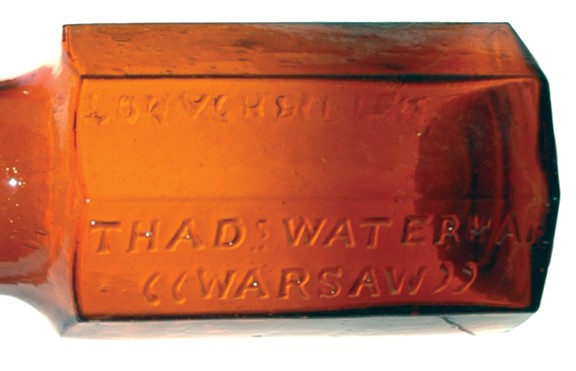 Look at the Quotation Marks around “WARSAW”

The nickname Thad is typically short for the name Thaddeus which is not a very popular name now as noted on census forms and name popularity charts. It looks like a rather serious decline in popularity from 1920 but possibly higher in 1860 or so.

This is a GREAT bottle and extremely tough to get. As usual, I welcome more information so I can add to and embellish this post. 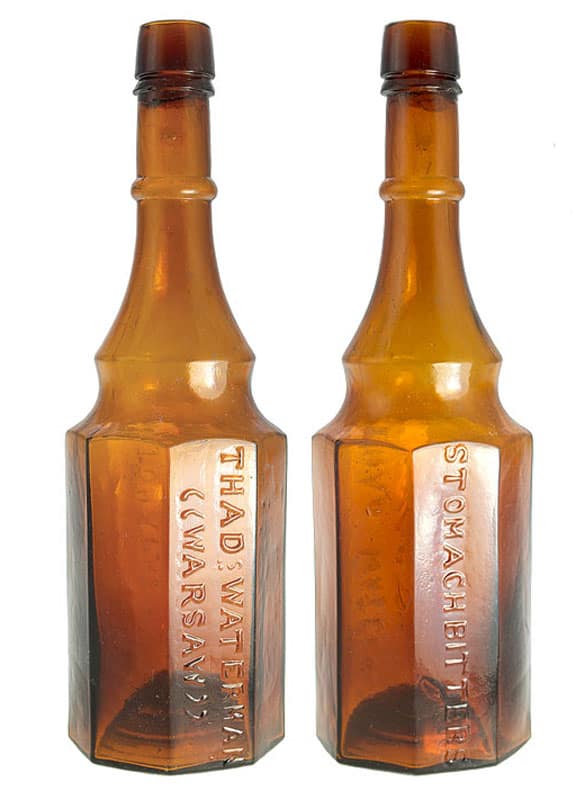 THAD WATERMAN / “WARSAW” // f // f // // STOMACH BITTERS // f // f //
10 7/8 x 3 1/8
8-sided, Amber and green, LTCR, Applied mouth, Very rare
Bottle has a “steep roof” because the Polish population which centered in Chicago had houses with steep roofs so snow would not stick.
Example found at the mouth of the Mississippi River.

Regarding the Thad Waterman Warsaw Bitters, I suspect it is fitting that the example you show was found at the mouth of the Mississippi since it is a New Orleans bottle. I haven’t sorted out all the details but found enough online to document the product. It appears Thad was a well known liquor dealer in New Orleans. It is not clear why he chose another liquor business (Colomb, Brooks & Co.) to act as agent for the product, but he did. The attached items (see below) give a little insight into the bitters. One is a page from the 1869 New Orleans Directory that certainly alludes to the Warsaw Bitters, since it uses Waterman’s name.

The other attachment (see below), from the New Orleans Times Picayune of April 8, 1869, which is from a long article describing displays at the third annual state fair in New Orleans. Colomb, Brooks & Co. entered a display of “Waterman’s Warsaw bitters.” That about clinches it. I’ll leave it to others to fill in the remaining blanks, for which there are plenty. I am too busy focusing on California bottles and will probably never finish all I want to cover. 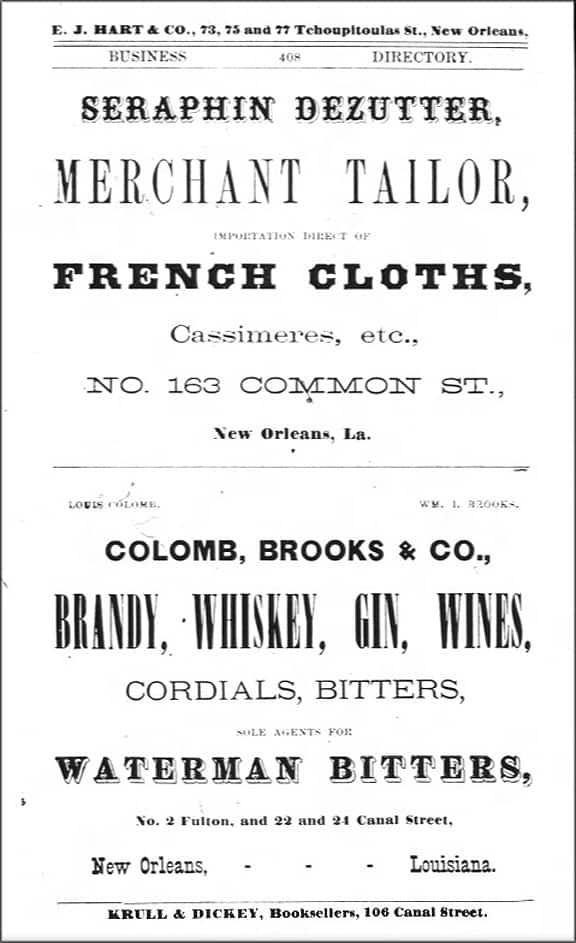 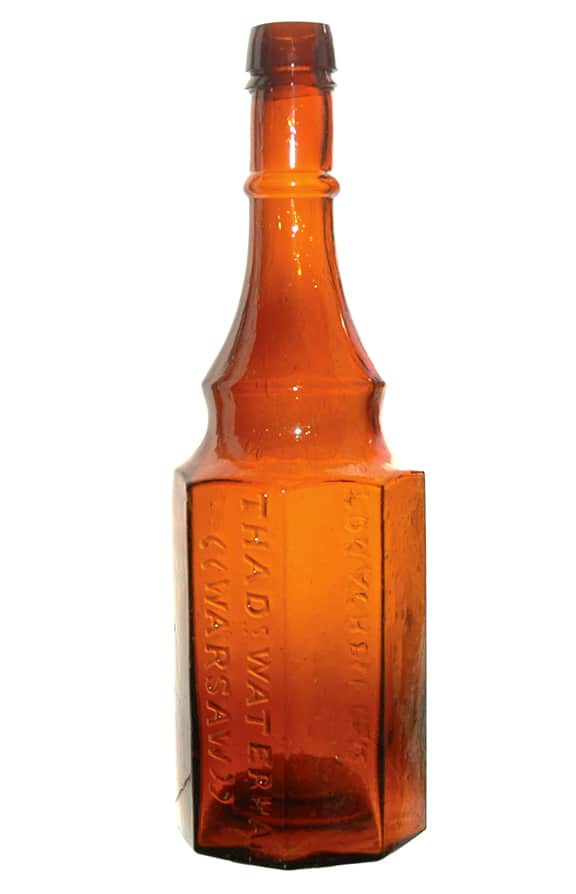 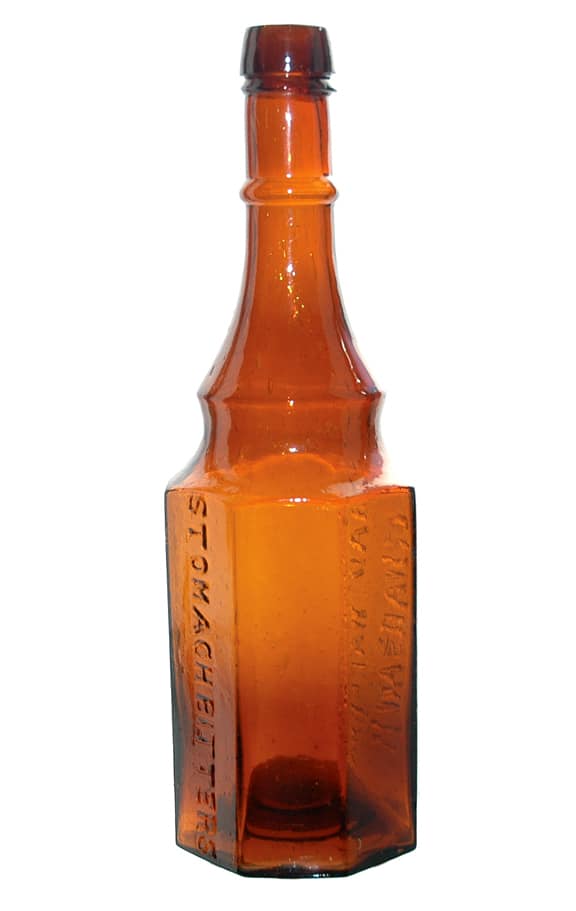 Ferdinand Meyer V is a native of Baltimore, Maryland and has a BFA in Fine Art and Graphic Design from the Kansas City Art Institute and School of Design. Ferdinand is the founding Principal of FMG Design, a nationally recognized design consultation firm. Ferdinand is a passionate collector of American historical glass specializing in bitters bottles, color runs and related classic figural bottles. He is married to Elizabeth Jane Meyer and lives in Houston, Texas with their daughter and three wonderful grandchildren. The Meyers are also very involved in Quarter Horses, antiques and early United States postage stamps. Ferdinand is the past 6-year President of the Federation of Historical Bottle Collectors and is one of the founding members of the FOHBC Virtual Museum.
View all posts by Ferdinand Meyer V →
This entry was posted in Advertising, Bitters, Collectors & Collections, Figural Bottles, History and tagged bitters, Brooks & Co., Cannon, chicago, Colomb, Eric McGuire, Figural, Gdansk, New Orleans, New Orleans Times Picayune, Poland, Polish, Series, Stomach, Thad, Thaddeus, Warsaw, Waterman. Bookmark the permalink.