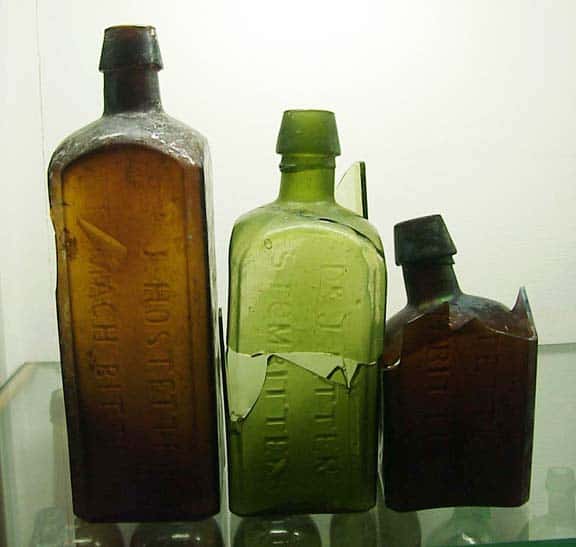 I thought I would publish some interesting dialog between big time East Coast digger and collector Chris Rowell and one of the top, if not the top Hostetter’s collectors and experts in our hobby, Richard Siri from the West Coast.

[Chris Rowell] Ferd, We dug a pit today with 5 iron pontiled Hostetter’s Stomach Bitters and sadly they all were smashed. But I wanted to ask, have you ever seen an iron pontiled one in any color other then Amber? I know I have seen many smooth base ones in some nice shades of green. But one of the smashed ones was a great light yellow green with an iron pontiled base. It would have been killer crude and whittled also. I will forward you some pictures of the shards if you want. If you know anyone who is a big Hostetter’s collector that might know if the pontiled ones come in other colors if you could ask them that would be great also. Thanks Chris

[Richard Siri] Chris: There are at least 2 different molds of iron pontiled Hostettler’s and I have one of each. Also I bought an olive green large one from Norm Heckler years ago that was described as a sticky pontiled one. It came out of a Florida collection. I really don’t believe it’s a true pontiled example. As for the ones I have, they are both amber although I have examples of the same molds that are not pontiled and one of those is a yellow amber. I would very much like to see your shards especially the bases. That’s the fun of collecting Hostettler’s, you can’t live long enough to see them all. Richard Siri

[Chris Rowell] Hi Richard, Thanks for the reply. I knew the green one would have been a special bottle when we found the shards. Overall I have shards to 6 iron pontiled Hostetter’s from yesterdays dig and another pit 3 doors down. Most of them look to have been from examples with the big “R” in “DR” and the round indented base. All of those are amber. The green one and one amber one has the square indented base and the small “r” in Dr. I’m going to copy Ferd on the pics as I’m sure he will enjoy seeing them also. Chris

[Richard Siri] Chris: I figured that the green one would be the one with the square indented base as I have a yellow amber and an olive green one that is the exact same bottle but they are smooth base. The other pontiled one I haven’t seen in any other color other than amber but the same bottle comes in olive with a smooth base. The amber Hostetter’s that was found on the Arabia river boat that was sunk in 1857 was smooth based and that mold is the round indented pontiled one. I have two small Hostetter’s that are extremely crude but smooth based with a dog legged A on the base that could be earlier than the pontiled ones but that’s just my guess. If you ever get tired of looking at those shards I would love to add them to my collection. Richard 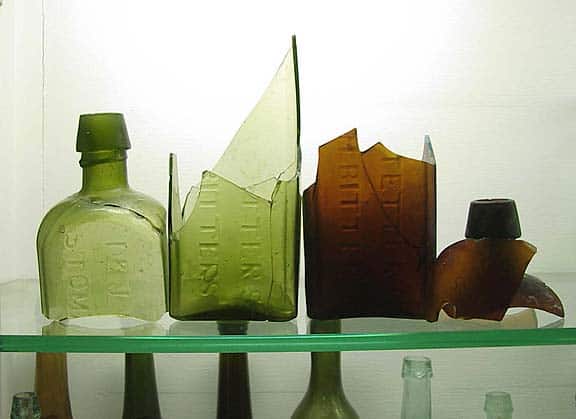 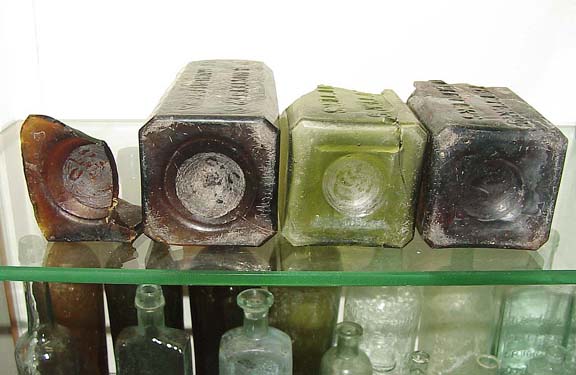 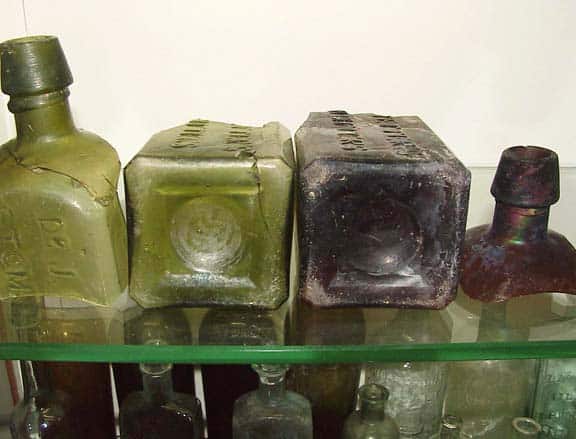 Ferdinand Meyer V is a native of Baltimore, Maryland and has a BFA in Fine Art and Graphic Design from the Kansas City Art Institute and School of Design. Ferdinand is the founding Principal of FMG Design, a nationally recognized design consultation firm. Ferdinand is a passionate collector of American historical glass specializing in bitters bottles, color runs and related classic figural bottles. He is married to Elizabeth Jane Meyer and lives in Houston, Texas with their daughter and three wonderful grandchildren. The Meyers are also very involved in Quarter Horses, antiques and early United States postage stamps. Ferdinand is the past 6-year President of the Federation of Historical Bottle Collectors and is one of the founding members of the FOHBC Virtual Museum.
View all posts by Ferdinand Meyer V →
This entry was posted in Bitters, Collectors & Collections, Digging and Finding, Questions and tagged Arabia, bitters, Chris Rowell, glass shards, Hostetter's, pontil, Richard Siri. Bookmark the permalink.