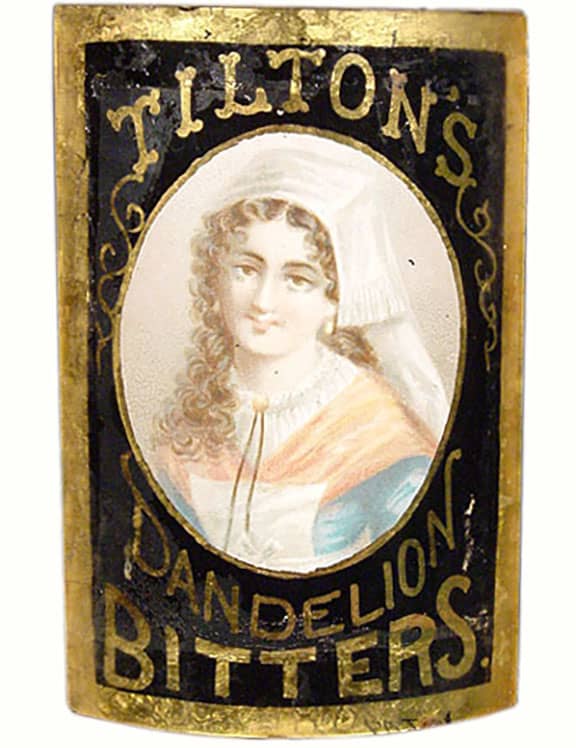 Some of you may be aware of a series of Dandelion Bitters posts that have occurred on Peachridge Glass in the past. A complete listing is at the bottom of this post. This wonderful “label under glass” Tilton’s Dandelion Bitters is one that has stumped me as I initially could not find any information. I am going to try again today. This example is from GreatAntiqueBottles.com (Ed and Kathy Gray) super web site.

Their description of the bottle which previously sold privately was: 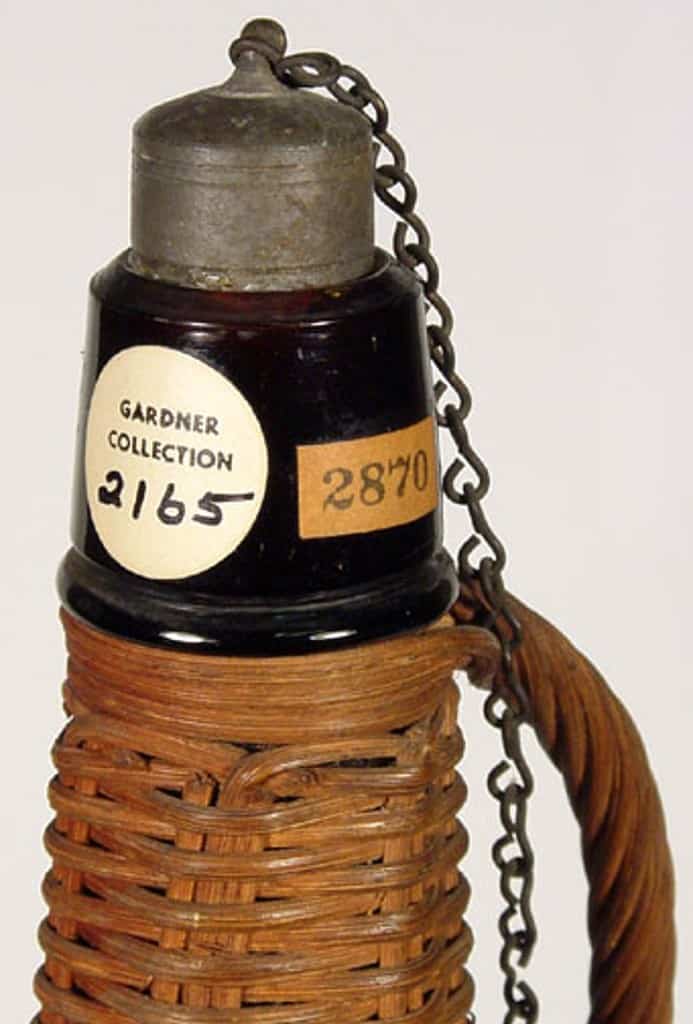 Label Under Glass, ‘Tilton’s’ / (multicolored picture of a woman) / ‘Dandelion / Bitters’, (Ring/Ham, T-31L), American, ca. 1870 – 1875, amber, 11 1/4″h, “DYOTTVILLE GLASS WORKS PHILA.” embossed on a smooth base, applied tapered collar mouth, encased in wicker. The bottle, and most importantly, the label, are in perfect condition. The wicker casing has some loss, as is to be expected. We suctioned this exact bottle in 1995, and have not seen one since! Ex. Carlyn Ring Collection. – Glass Works Auctions

I could not find any references to a Tilton’s Dandelion Bitters but there are references to a Dr. J. C. Tilton’s Indian Balm Pills and Indian Balm Medicated Toilet Soap from Pittsburg (Pittsburgh). Dr. Tilton was also selling a D. Karsner’s Catarrh Remedy. I wonder if J. C. is our man? Interesting to note that Ed Gray is from the Pittsburgh area. He is the one who sold the bottle and took these nice pictures.

It looks like J. C. Tilton was around longer than I thought. In the advertisement below, Tilton is looking for distributors for packages of “Wonder of the World” in 1869 in Pittsburgh.

As it turns out, Joseph C. Tilton, born in Ohio around 1825, was quite a salesman and placed hundreds if not thousands of small advertisements looking for people to make a few dollars and sell things for him. Throughout his career he was listed in a number of professions including, Dealer in Oil Lands (1865-1866), Real Estate Agent (1868-1877), Dealer in Patent Rights and Solicitation (1867-1878) and Making Whacks, (huh?) in 1879 (see listing below) and Carpet Cleaning (1884). Notice an O. C. Tilton selling Catarrh Remedies at the same address.

Tilton’s big claim to fame was his “WOMEN’S FRIEND and STEAM WASHER”. Look at this monster advertisement below. Later in the 1880s he would be selling Glycerine Carpet Paste and was the owner of Ole, Dry Carpet Cleaning Company in Pittsburgh.

Was this the same Tilton that made the Tilton’s Dandelion Bitters? Maybe or maybe not. More research is needed. Joseph C. Tilton must have been a very enterprising and ambitious individual. He was the predecessor to the present era Ronald M. “Ron” Popeil (born May 3, 1935) who was an American inventor and marketing personality, best known for his direct response marketing company Ronco. Some of us remember him. He was well-known for his appearances in infomercials for the Showtime Rotisserie (“Set it, and forget it!”) and for using the phrase, “But wait, there’s more!” on television as early as the mid-1950s. He is perhaps best known for pitching the iconic Pocket Fisherman collapsible fishing pole and smokeless ashtray. 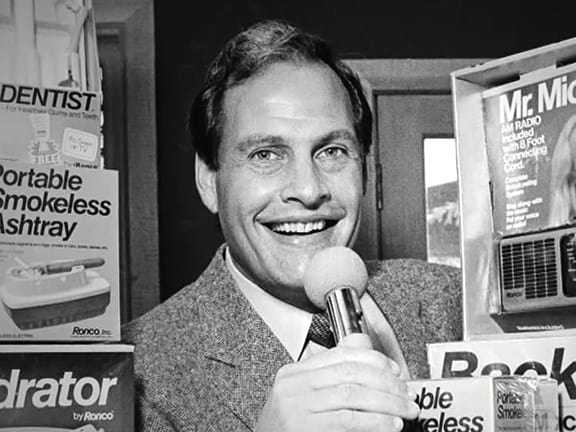 Here is some new information provided by Marianne Dow and a follow-up listing I found. It looks like these are our missing links! William Beacket Tilton (1810-1895) made the bitters after James Aaron Tilton’s death in 1861. He was the brother of James.

Found the correct Tilton – this labeled example tells us: DR. TILTON’S DANDELION BITTERS. “prepared under the supervison of J. A. Tilton, MD, Newburyport, Mass.” and “entered according to Act of Congress, in the year 1868, by James A. Tilton, in the Clerk’s Office of the District Court of Massachusetts”  – Marianne Dow

Dr. James Aaron Tilton was born in Canaan NH, December 1815; graduated at Dartmouth College; entered the Medical Department and graduated October 26, 1841, and soon came to Chichester and commenced the practice of medicine. While here he was married to Miss Sarah T. Stanyan, daughter of Abram Stanyan, who died at Newburyport Mass., April 1881. After practicing here for many years he removed to Pembroke, N.H. and thence to Amesbury, Mass; remained there twelve years and established a good reputation as a physician. From Amesbury he removed to Newburyport where he remained in successful practice until his death, which occurred in 1861. 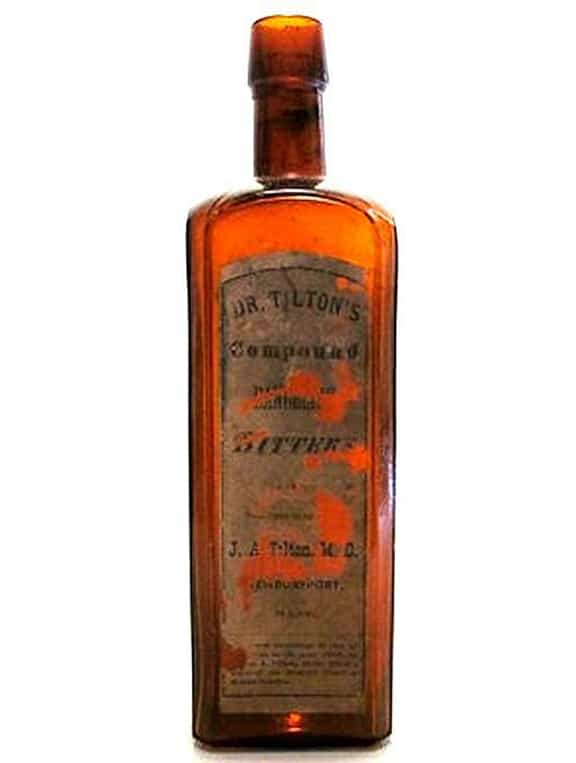 DR. TILTON’S DANDELION BITTERS. This bitters is a label only using the standard, 9 1/4″ X 2 1/2, beveled cornors, amber utility bottle. The bottle is in excellent condition. The label, as you can see in the last 2 photos, has problems. However, all of the important information can be read – “prepared under the supervison of J.A Tilton, MD Newburyport , Mass.” and ” entered according to Act of Congress, in the year 1868, by James A. Tilton, in the Clerk’s Office of the District Court of Massachusetts”.  – Worthpoint

Ferdinand Meyer V is a native of Baltimore, Maryland and has a BFA in Fine Art and Graphic Design from the Kansas City Art Institute and School of Design. Ferdinand is the founding Principal of FMG Design, a nationally recognized design consultation firm. Ferdinand is a passionate collector of American historical glass specializing in bitters bottles, color runs and related classic figural bottles. He is married to Elizabeth Jane Meyer and lives in Houston, Texas with their daughter and three wonderful grandchildren. The Meyers are also very involved in Quarter Horses, antiques and early United States postage stamps. Ferdinand is the past 6-year President of the Federation of Historical Bottle Collectors and is one of the founding members of the FOHBC Virtual Museum.
View all posts by Ferdinand Meyer V →
This entry was posted in Advertising, Bitters, History, Medicines & Cures, Questions, Remedy and tagged bitters, Dandelion, Dow, Gardner, Glass, Gray, Joseph, label, Massachusetts, Newburyport, patents, Pennsylvania, Pittsburgh, Popeil, steam, Tilton, washer, wicker. Bookmark the permalink.