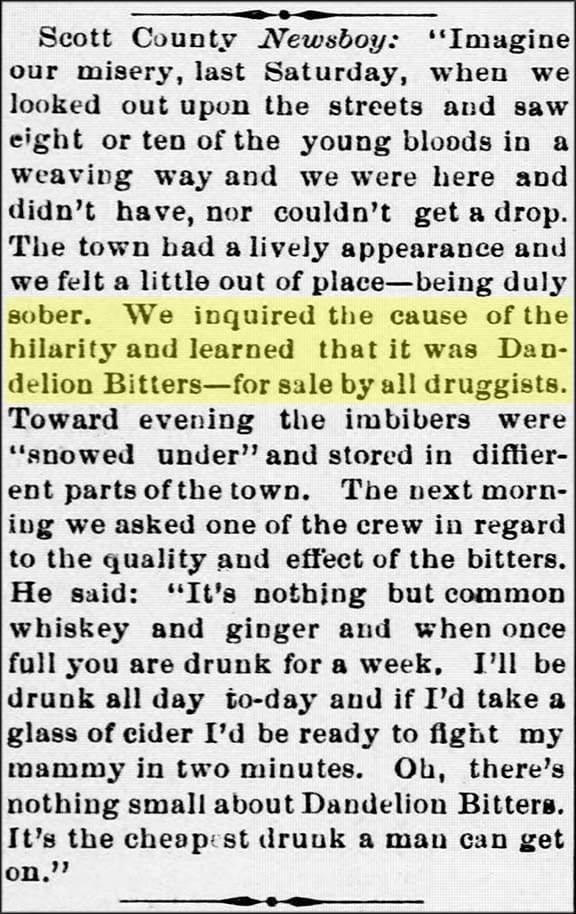 A short post this morning looking at yet another unlisted bitters. This time it is the Bond’s Dandelion Bitters from Fort Wayne, Indiana. The bitters is dated 1868 along with the support advertising. There is scant material and information available and certainly no surviving bottle examples, at least that I am aware of.

I posted the top clipping from the Iron County Register (Ironton, Missouri) in 1889 to remind us how strong some of these bitters products really were. Read the copy as it is kind of amusing as they were drinking some form of Dandelion Bitters.

“Imagine our misery, last Saturday, when we looked upon the streets and saw eight or ten young bloods in a weaving way…”

William J. Bond was born on 23 December 1845 in Madison, Indiana. The first directory listing has him listed as a dealer in drugs, medicines, paints, oils, dye stuffs, etc. in 1866 at the southwest corner of Main and Calhoun Streets in Fort Wayne, Indiana. The next year he is partner with James C. Nones at Bond & Nomes and they are listed as wholesale and retail druggists and dealers in paints, oils, varnishes, glass and dye stuffs at 95 Columbia Street in Fort Wayne.

In 1868, Bond was the Sole Proprietor of Bond’s Dandelion Bitters and also magically becomes a Chemist. James Nones must not have been his partner anymore. He advertised and sold his bitters for one dollar a bottle at 95 Columbia Street. He reported that his bitters contained the active principles of Dandelion, Sarsaparilla, Peruvian Bark, and other Barks, Herbs, and Roots. Bond said his bitters contained no whiskey but used a pure California Wine as a preservative agent. Yeah sure. He also called it a tonic and said that it cleansed the blood and liver. In his advertising, Bond stated that every one of his bottles came with a beautifully engraved label and a signature from the proprietor. He cautioned against counterfeits and said his bitters only came in a bottle and was not to be bought by the gallon or barrel. He mentions no embossed typography so we are looking at a labeled bitters.

William Bond was into selling volume as you will see in the advertisement below where he gives a range of bottles from one to six, and states that the various quantities would cure just about anything. I think I would have ordered and regularly taken six bottles just to have my bases covered.

So we have an unlisted, labeled bitters and little information. Maybe we can add to the post with more information. I also can not figure out what 1868. — XX. — S-Y-L. means? Maybe it means buy 20 bottles and it will “Save Your Liver”. Maybe it meant, I am 20 years old and after I make a quick fortune, I will “See You Later”. I doubt it. What do you think?

Ferdinand Meyer V is a native of Baltimore, Maryland and has a BFA in Fine Art and Graphic Design from the Kansas City Art Institute and School of Design. Ferdinand is the founding Principal of FMG Design, a nationally recognized design consultation firm. Ferdinand is a passionate collector of American historical glass specializing in bitters bottles, color runs and related classic figural bottles. He is married to Elizabeth Jane Meyer and lives in Houston, Texas with their daughter and three wonderful grandchildren. The Meyers are also very involved in Quarter Horses, antiques and early United States postage stamps. Ferdinand is the past 6-year President of the Federation of Historical Bottle Collectors and is one of the founding members of the FOHBC Virtual Museum.
View all posts by Ferdinand Meyer V →
This entry was posted in Advertising, Bitters, Druggist & Drugstore, History, Medicines & Cures, Tonics and tagged bitters, Bond, chemist, Columbia, Dandelion, Fort Wayne, herbs, indiana, Medicine, Nomes, roots, Sarsaparilla, Tonic, William, Wine. Bookmark the permalink.