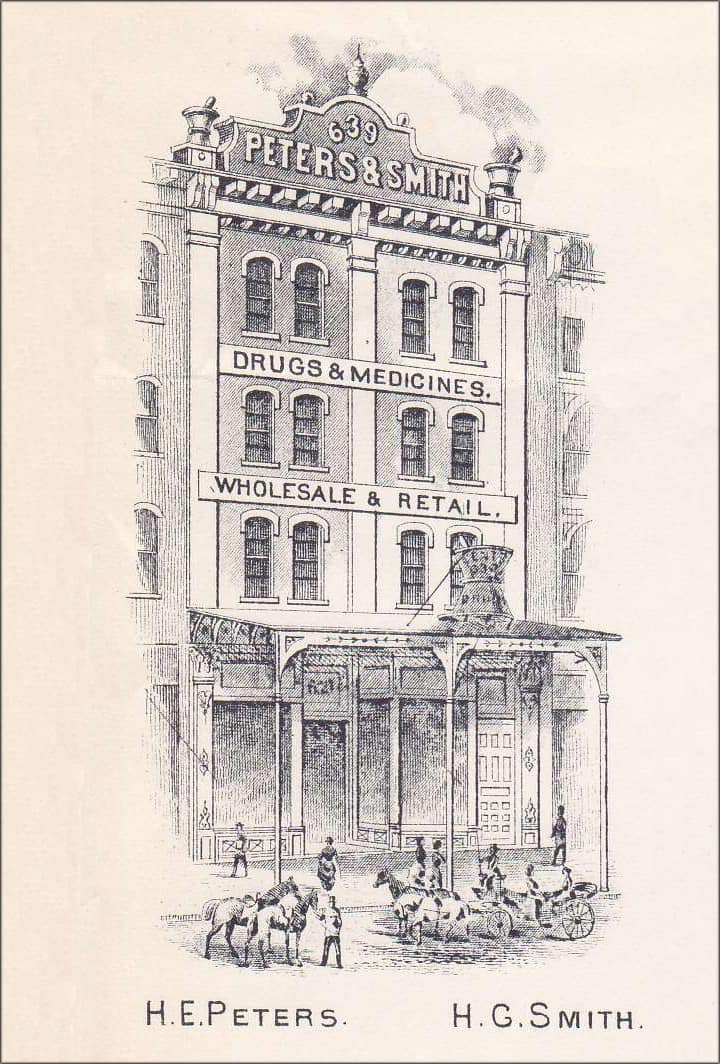 Collecting bitters bottles is just too much fun. I realize to some, or probably many, that there is monotony in looking at all of the various dandelion bitters. My apologies, I am just consumed with all of this. I think this is the tenth dandelion bitters brand we have looked at lately. This one is exciting because there is an embossed Dandelion on the bottle and I have been looking for an example for years with no success. Maybe that will change.

The Carlyn Ring and W.C. Ham listing in Bitters Bottles for the Dandelion Bitters from Peters & Smith in Allentown, PA is as follows: 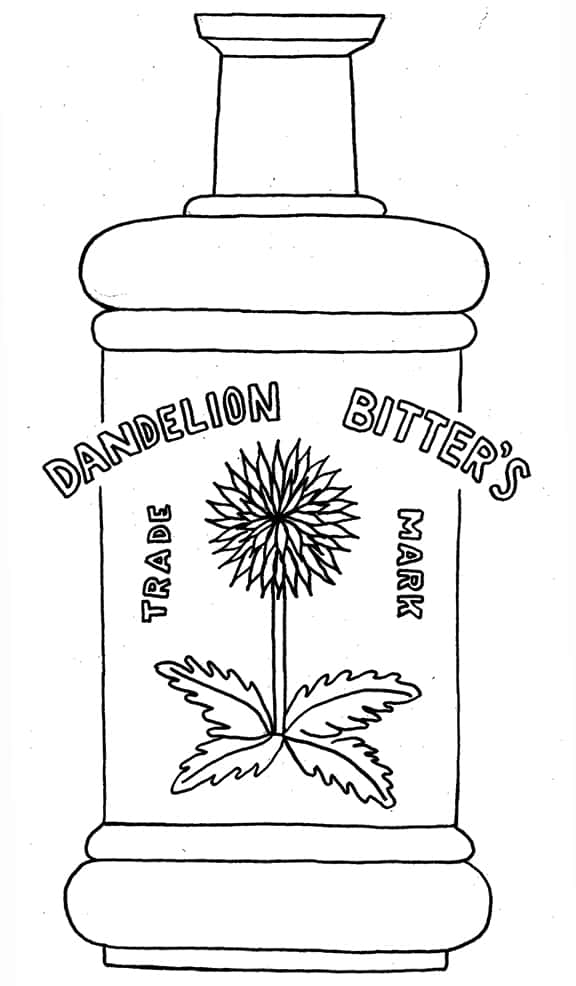 The primary player in this bitters product is Henry Eugene Peters who was born in North Whitehall township, Allentown, Pennsylvania, on January 14, 1858.

The Peters & Smith logo on their letterhead is a work of art with all of the typographic treatment.

Peters entered the drug business in 1881 when he purchased the drug store property at 639 Hamilton Street in Allentown and next received his patent for Dandelion Bitters on July 24 1884. Henry G. Smith joined him in 1886 and the concern was renamed Peters & Smith, Manufacturing Pharmacists and Retail and Wholesale Druggists. They also were the proprietors of The Dandelion Bitters Company as their product was so successful. They dissolved their partnership on March 2, 1898 as Mr. Smith retired. The firm was in existence for twelve years and enjoyed a large and profitable trade. Mr. Peters continued in business at the same location. During the summer of 1909, he remodeled the building. In 1909 his son, Harold Peters, was admitted into the firm. Much more information is noted below about the partnership and the men involved. 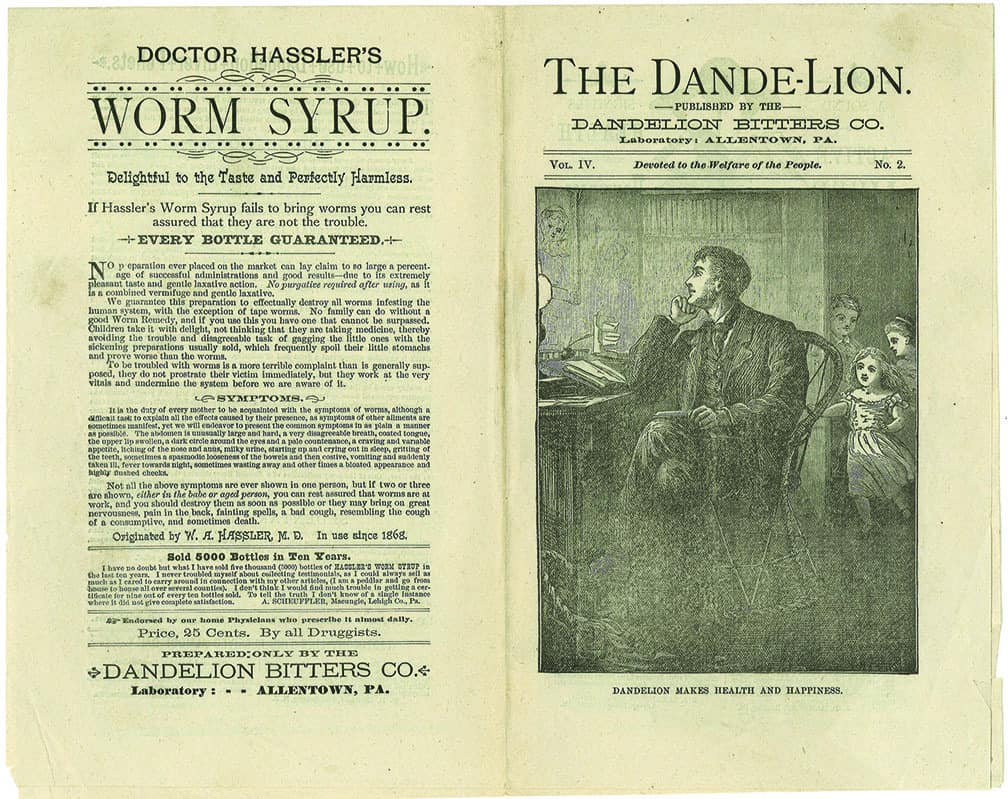 Front and back cover of THE DANDE-LION published by The Dandelion Bitters Co., Allentown, PA. – Meyer Collection 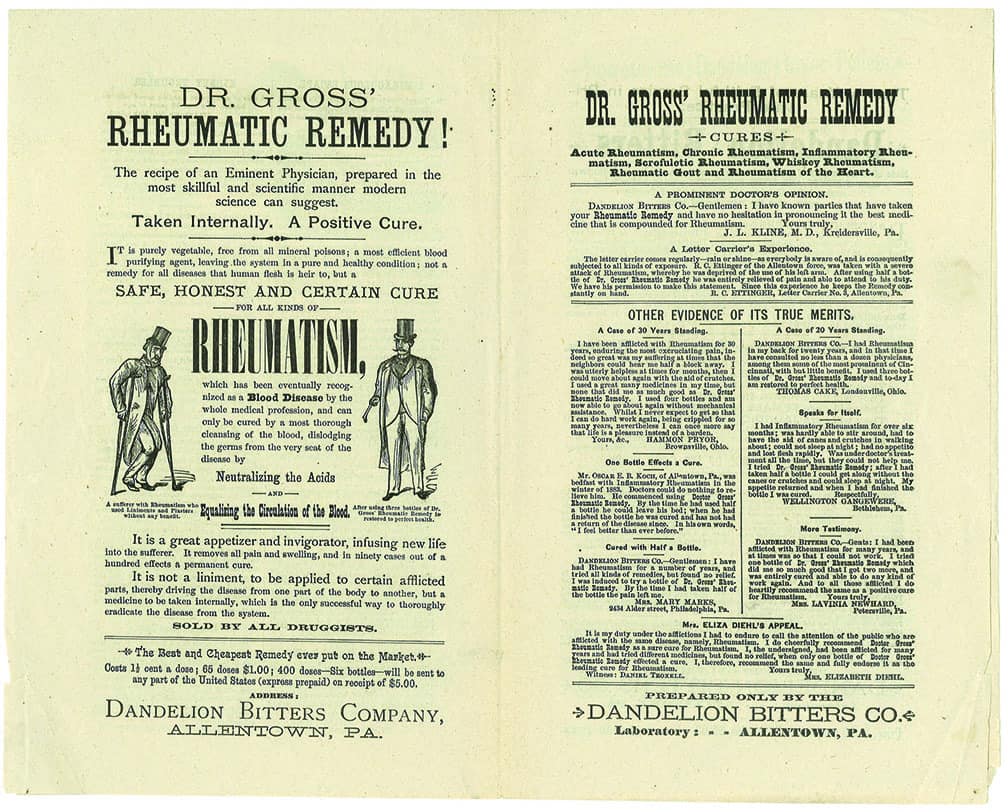 THE fact is probably unquestioned that the recently refitted and restocked drug store of Messrs. Peters & Smith, at No. 639 Hamilton street, Allentown, is the leading establishment of the kind in the Lehigh Valley. No seeming extravagance of language could do full justice to its present appearance. It is the model pharmacy headquarters in this city, and quantity, quality and constituency are all fully in keeping with one another.

Young in years, but old in experience, Peters & Smith form an admirable combination. Practical pharmacists, thoroughly skilled in every department of their specialty, they are also sufficiently actuated with the spirit of the times as to keep abreast in all that materially contributes to the convenience of the public and that ministers to the pleasure of the eye. Their drug store, aesthetically considered, lacks nothing to render it attractive throughout. The recent changes the building has undergone have completely revolutionized its interior appearance. New shelving, counters and flooring lend it features not elsewhere to be met with in the valley. While the internal improvements are chiefly of yellow pine, the handsome front is of hard maple. The painter has lent his art to embellish the place, too, and he has been eminently successful. The office in the rear is capacious and both finished and furnished in a style befitting the surroundings. The second floor is devoted to the wholesale department and the laboratory. Even the deep, capacious cemented cellar, extending under the whole building, is pressed into service as a subterranean drug store in itself. The attempt of an ordinary layman to describe the contents of such an emporium would be manifestly a failure, so lest the failure would be too glaring the attempt will not be made. You and the rest of the Lehigh world know very well that nowhere else within the low-ranging mountains that environ the county is there such an assemblage of drugs, druggists’ sundries, perfumeries, toilet articles, fancy goods, and everything else that can contribute to your health, your comfort or the gratification of your luxurious taste. Among this medical wilderness, however, it would never do to omit special reference to a great specialty of Messrs. Peters & Smith, one that has creditably spread their name throughout the Middle Atlantic States. The merest tyro knows that reference is here made to those well, widely and favorably known specifics, Dandelion Bitters and Dandelion Liver Pellets. They are their own manufacture and are pronounced by the highest medical authority to possess all the virtues claimed for them. At last, it is a pleasure to have something to relieve our pains whereof we know the compounders. The world has long been imposed upon by unknown outside charlatans, the virtue of whose compounds chiefly consists in extensive advertising. In Dandelion Bitters and Dandelion Liver Pellets, on the other hand, we are surrounded by those whose health gained material benefits from their use. They are our friends and neighbors who speak loudest in praise of the virtues of their superior remedies. The witnesses are at our doors.

Among other specialties of this complete medical hall might be mentioned Gross’ Rheumatic Remedy, death to your aching bones, and Hassler’s Worm Syrup, that never fails to carry havoc to worms wherever it goes.

In the line of flavoring extracts Peters & Smith carry a stock as varied as it is select. Dealing in the products of the Standard Extract Company, the fact lends emphasis to this statement. Indeed, the truth is tersely but inadequately put when you are told that this complete drug and medical house, with its frontage of 21 feet and its depth of 75 feet, is filled with every conceivable article that goes to constitute the model establishment of to-day. Even a duplicate drug store on the second floor as the store proper is not lacking in completeness.

Henry E. Peters is a native of North Whitehall township, this county, and was born January 14, 1858. His, boyhood was spent in attendance at the Unionville school; his early youth at the Weaversville Academy, and his later youth at Muhlenberg College, which he left in 1875. He immediately devoted himself to mastering the drug business and embarked for himself in 1881. Henry G. Smith was born in Allentown, March 9, 1859, was furnished his education here and graduated from the Philadelphia College of Pharmacy, in 1879. After a long and exhaustive practical experience as a druggist, he became a member of the present firm in February, 1886. The leading drug store in the valley, descriptive comment is idle as to those qualities that have placed Peters & Smith in the first rank both as pharmacists and members of our business community. Their beautiful drug store is a credit to the city, and the members of the firm are an equal credit to the calling to which they have devoted their lives. Whenever skyey influences affect you, or your aesthetic taste needs pampering, remember that the number is 639 Hamilton street, Allentown. [Past, Present, and Future of the City of Allentown, Pa., 1886] 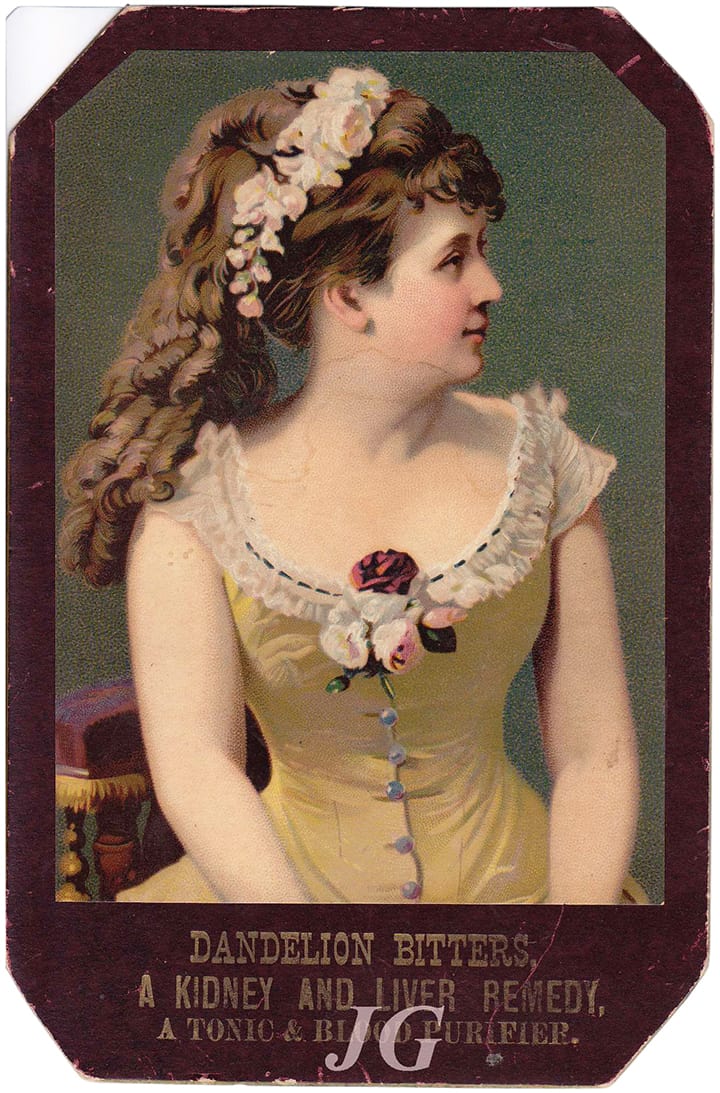 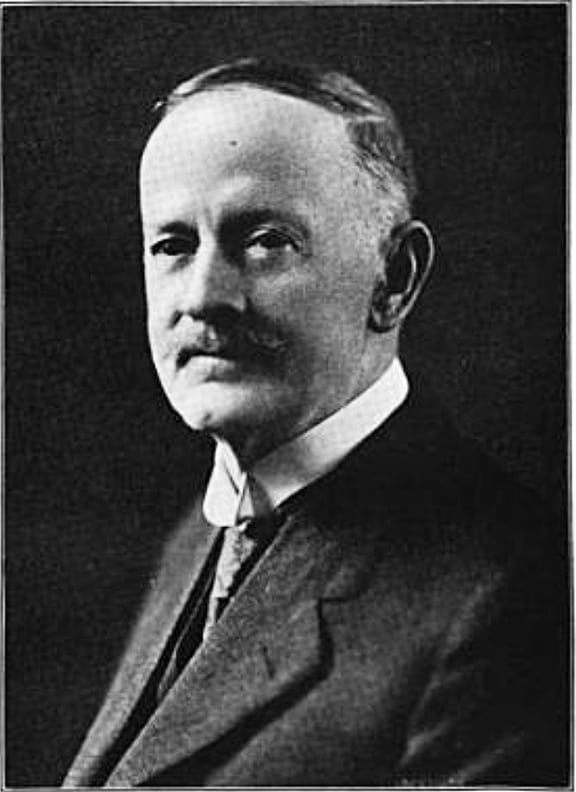 HENRY E. PETERS, head of the Henry E. Peters & Co. firm of druggists, was born on a farm in the township of North Whitehall, Lehigh County, in 1858. He attended the country schools. In 1869 his parents moved to Coplay where his father built the Eagle Hotel which he continued until his death in 1873 when the family moved to Allentown. Mr. Peters then entered Muhlenberg College, attending that institution until his junior year, when he entered the employ of Dr. Charles L. Lochman in the pursuit of the study of pharmacy. Later he attended and was graduated in 1880 from the Philadelphia College of Pharmacy as one of the honor men of the class of 160 students, being a classmate of the successful pharmacists, George B. Evans and George G. Behringer, the latter now a trustee of the college. Mr. Peters returned to Allentown and entered the employ of August Weber, and after a year purchased the establishment of Barnes & Hartzell, 630 Hamilton Street. He continued here until 1881, when he purchased the property at 639 Hamilton Street, the present site of his business. During the summer of 1909, he remodeled the building which now is one of the most up-to-date equipped drug establishments in Pennsylvania. He carries the largest and most complete line of merchandise of any business of its kind outside of Philadelphia. In 1909 his son, Harold Peters, was admitted into the firm. [Men of Allentown, 1917] 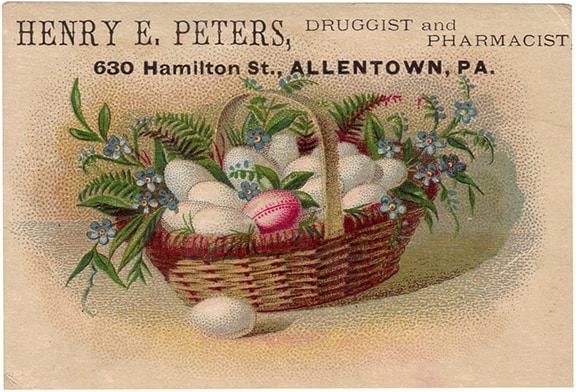 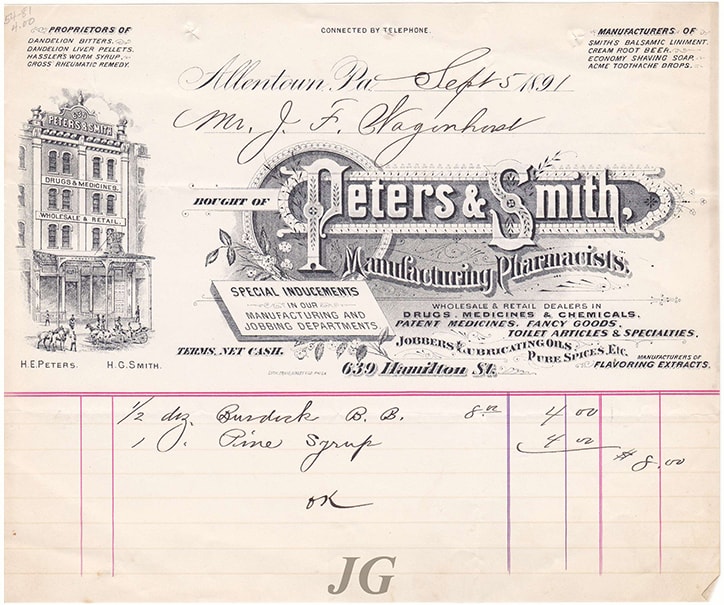 1898: The well-known and the popular firm of Peters & Smith, Allentown, dissolved partnership on March 2nd. Mr. Smith retiring. The firm was in existence for twelve years and enjoyed a large and profitable trade. Mr. Peters will continue in business, and being an accomplished pharmacist and a good business man will have no difficulty in maintaining the popularity of the store. 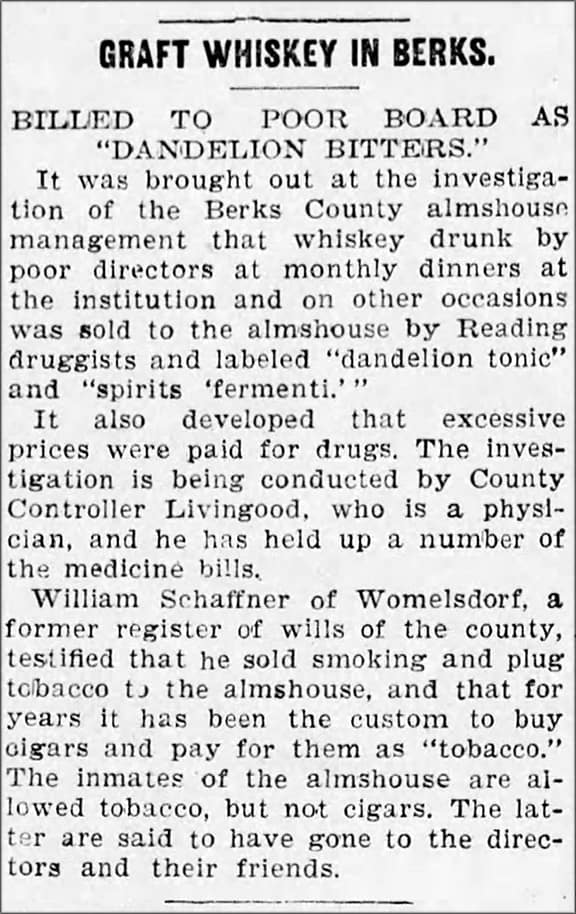 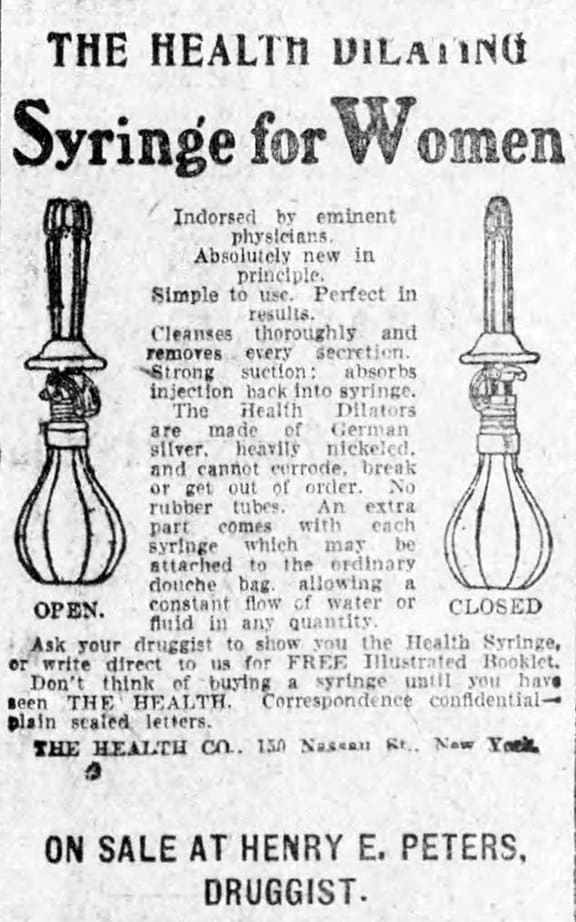 Ferdinand Meyer V is a native of Baltimore, Maryland and has a BFA in Fine Art and Graphic Design from the Kansas City Art Institute and School of Design. Ferdinand is the founding Principal of FMG Design, a nationally recognized design consultation firm. Ferdinand is a passionate collector of American historical glass specializing in bitters bottles, color runs and related classic figural bottles. He is married to Elizabeth Jane Meyer and lives in Houston, Texas with their daughter and three wonderful grandchildren. The Meyers are also very involved in Quarter Horses, antiques and early United States postage stamps. Ferdinand is the past 6-year President of the Federation of Historical Bottle Collectors and is one of the founding members of the FOHBC Virtual Museum.
View all posts by Ferdinand Meyer V →
This entry was posted in Advertising, Bitters, Druggist & Drugstore, Ephemera, History, Medicines & Cures, Trade Cards and tagged Allentown, bitters, Dandelion, Druggist & Drugstore, eugene, Gourd, Hamilton, Harold, Henry, Pennsylvania, Peters, Pharmacists, Smith. Bookmark the permalink.