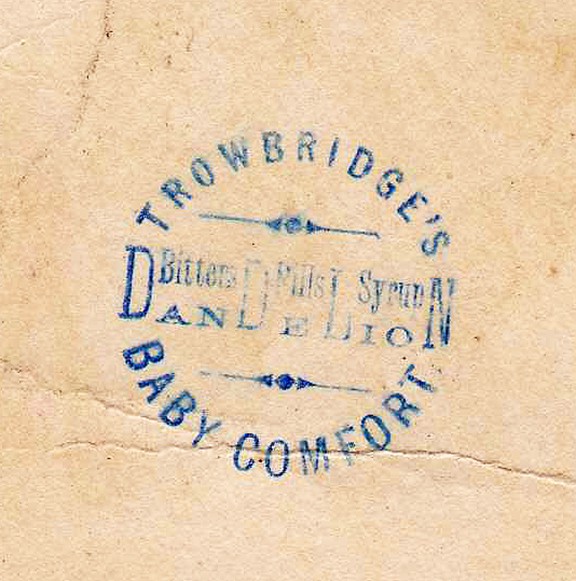 Sitting lonely on page 540 of the Carlyn Ring and W.C. Ham Bitters Bottles book is a listing for Trowbridge’s Dandelion Bitters. It might have been forgotten until bitters ephemera collector Joe Gourd submitted the advertising trade card used in this post for consideration in the “Dandelion Bitters” series. This is a stock trade card with a blue circular proprietor hand stamp on both sides of the card. The front stamp is ghosted on the card and you can barely read it. You can certainly read the stamp on the blank, reverse side of the card. Who made this bitters and where did it come from? I am not aware of any surviving bottles, which were most likely labeled only. 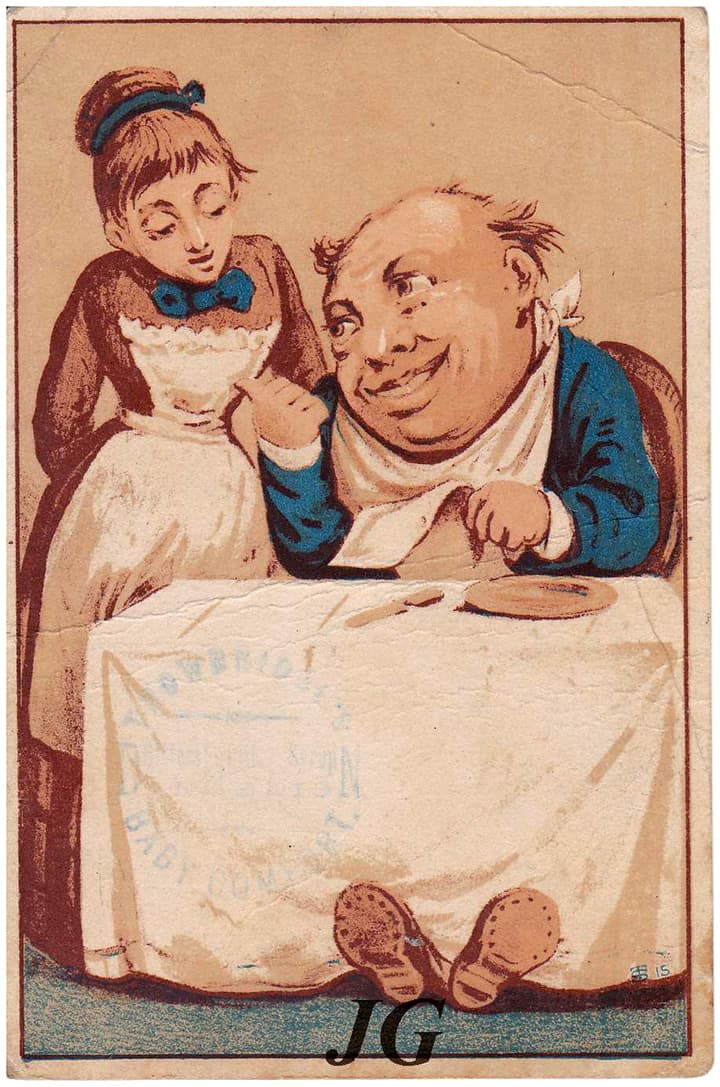 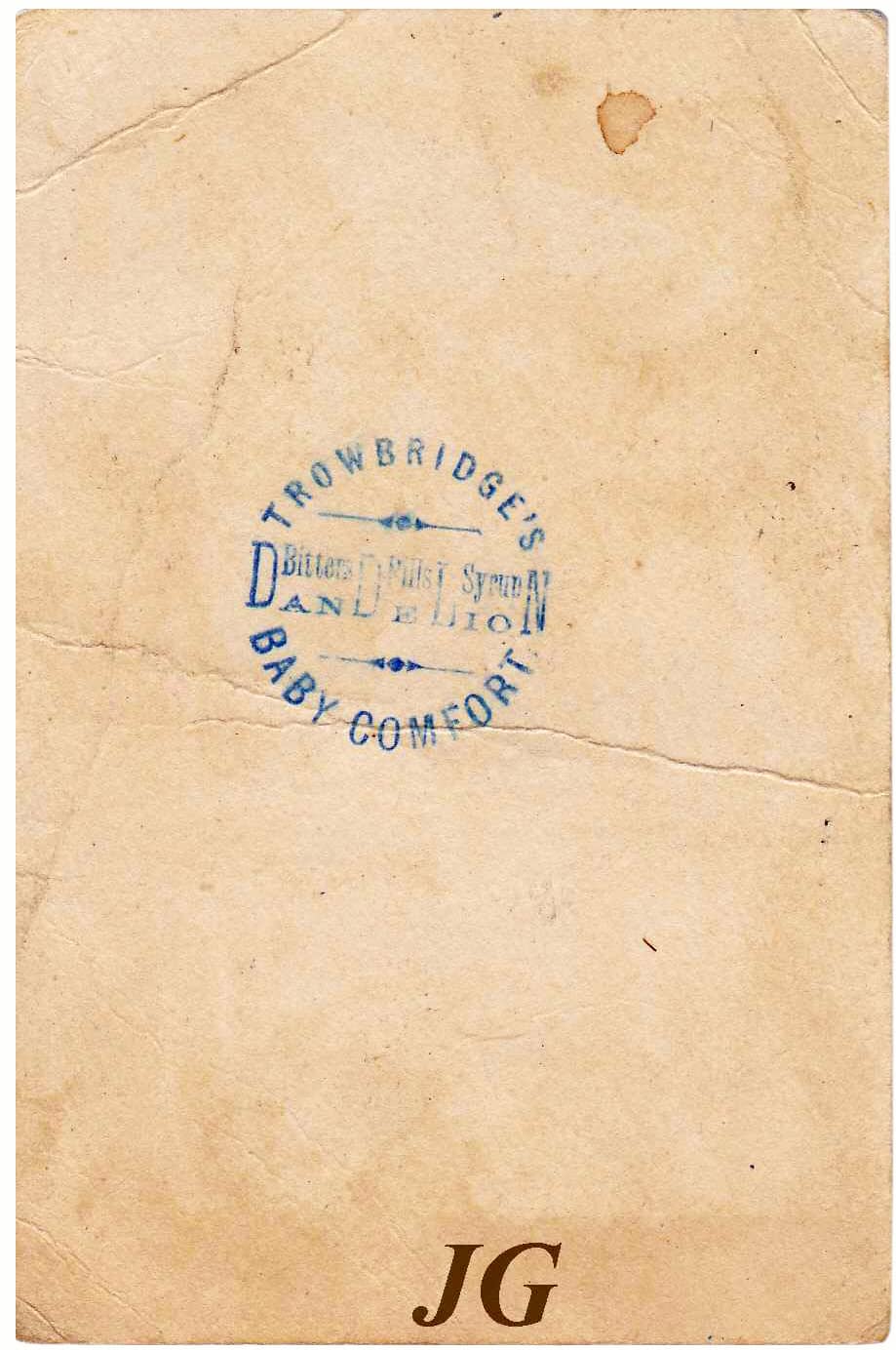 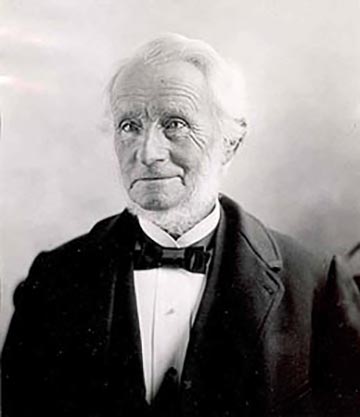 This is a bitters story about two sons of noted men who made and sold Dandelion Pills and Bitters and Baby’s Comfort in Stamford, Connecticut. I suspect their positions allowed them access to capital and gave them a willing audience of mothers to push their product while they were pulling teeth. Father number one was business tycoon Isaac F. Wardwell (1815-1905) (pictured above) who had a son Isaac Franklin Wardwell (1854-1908) (pictured below). The father also a twin sister named Betsy Wardwell Hoyt (1815-1905) who married Rev. William C. Hoyt (1814-1883). Their son was Clasen Wardwell Hoyt (1851-1912).

These two fellows were dentists and are listed on patent applications and medical directories for Dandelion Bitters from 1889 to 1912. In 1912 the bitters disappears and Dr. Trowbridge’s Dandelion Pills are being sold by The Dandelion Pill Company in Stamford all the way up to 1935 or so. I’m sure Prohibition in 1920 and the Pure Food and Drug Act of 1906 had a big influence here. The power of dandelions! and tough to get rid of too! 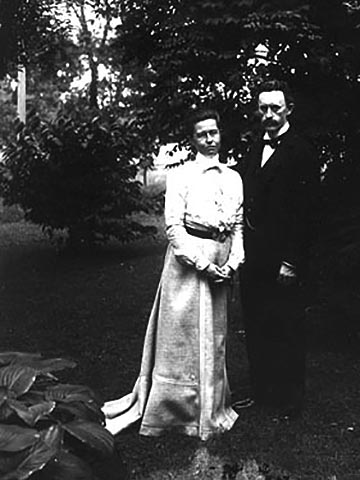 ISAAC WARDWELL IS DEAD
In 90th Year, But Active Till A Few Days Ago
HELPED PROGRESS OF TOWN

Entering Waring’s Foundry as a Boy, He Became the Head of Business
Which Still Flourishes — His Twin Sister, Mrs. Hoyt, Still Survives.

Isaac Wardwell died yesterday, at 5 p.m., at his home in Elm Street. He was stricken with apoplexy last Monday, and at no time after that was there much hope for his recovery. Unconscious nearly every moment from the time of the attack, his fatal illness was attended by little suffering.

The deceased was a son of Isaac Wardwell, born in Stamford, Dec. 28, 1766, and was one of 14 children. He was born at the Westcotts farm home of his father, Dec. 10, 1815. His twin sister, Betsy, who married Rev. William C. Hoyt, May 1838, is the only survivor of the fourteen. Mr. Wardwell passed his boyhood at his father’s homestead. He received a good common-school education. In 1832 he was apprenticed to the carpenter’s trade, and served five years at it. In 1838, he went to work for George Waring, in the Rippowam Foundry, and in 1846 he became the junior member of the firm. In 1851 the firm became J.D. Warren & Co., and subsequently it became a stock company under the name of the Stamford Foundry Co., of which J.D. Warren was made president. Mr. Wardwell continued his interest in the firm, and up to his day of his sudden illness was in the habit of visiting the offices frequently. Mr. Wardwell was one of the promoters and builders of the Canal, and he was also instrumental in a good deal of the later harbor improvement. He held stock in the First National Bank of Stamford, which by the way, is the oldest national bank in the United States. His business career was characterized by rugged honesty, shrewdness and sound judgment.

His health has been remarkable, considering his age. Up to the day he was stricken ill, he was able to go about every day, driving, and transacting business. Until a few years ago he used to take a lot of delight sailing in the sound. He was a great fisherman.

On April 27, 1847, Mr. Wardwell married Miss Frederica L. Shaw, a daughter of Frederick Shaw. There were four children by the union – Anna Wilkinson, Ida Louise, Dr. I. Franklin Wardwell, a dentist who has been actively identified with the Stamford Yacht Club, and Dr. Claison S. Wardwell, also a dentist. The Wardwells have been active members of St. John’s Church.

Mr. Wardwell helped many young men in this town by his advice, and started some upon the road to a successful career in business. He had large real estate holdings near the canal, and had great faith in the growth of the town. Shrewd in making investments, he was nevertheless very kind-hearted, and many will testify to his generous qualities. His greatest activity was during a generation of Stamfordites of whom few are left, for Isaac Wardwell was active in affairs here in more than half a century ago.

In his private life he was devoted to his family, and his home was singularly happy. It was the constant aim of his children to make his declining years peaceful and comfortable. He was not, however, the type of man willing to relinquish his grasp upon business when old age crept on. Full of energy since boyhood, he seemed to like work just as well at a time when most men would be satisfied to go into retirement.

Isaac Wardwell’s life contributed materially to the progress of his native town. He has left a record of which his children and his fellow citizens may feel proud.

I am a bit stumped as to where the Trowbridge name came from? A couple of leads but many dead ends. I do suspect it may be Dr. William Henry Trowbridge. 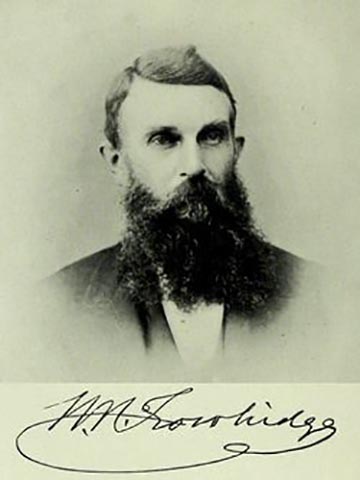 William H. Trowbridge received his early education in district and private schools in Stamford, Conn., to which town his parents moved. Even in childhood he developed a fondness for medicine. Teaching and studying alternately, he attended one course at Yale, two courses at the New York College of Physicians and Surgeons, and was graduated from the Yale Medical School in 1855 with the degree of M.D. After spending one year in the office of Dr. George Lewis in New York City he opened an office in Stamford, Conn., where, excepting during his army life, he enjoyed a thriving practice.

In the Civil War, Doctor Trowbridge was first engaged as surgeon of the 23d Connecticut Infantry, enlisting September 25, 1862. To this work he was impelled by a sense of duty, and left a lucrative and fast increasing practice solely to do good. His regiment proceeded to New Orleans with General Banks, and on arriving there Doctor Trowbridge sought the medical director of that department and told him that he came there for work, and if he was needed anywhere he would be on hand. As a result, during his stay in the department there was not a battle fought in which he was not called upon to give service. After the battle of La Fourche Crossing he was called, without assistance, to attend to more than two hundred wounded Confederate prisoners, whose injuries ranged from flesh wounds to broken skulls and shattered limbs. He commenced his work at four o’clock Sunday afternoon and worked incessantly, without sitting down to eat or sleeping, until Tuesday at midnight. The day after he was left in the enemy’s hands with the wounded, but was kept by them in the same place and service. This captivity lasted six weeks. Soon after he accompanied his regiment to Connecticut and with it was mustered out of service on the expiration of his term of enlistment on August 31, 1863. He was soon selected as surgeon of the board of enrollment in the Fourth District of Connecticut and placed on duty at Bridgeport. He attended so well to the duties that he held that position until the close of the war, when he was again honorably discharged, and he returned to his home in Stamford. He resumed his professional practice, and from that time until his death was identified with the town, his practice and reputation for skill increasing yearly.

Doctor Trowbridge’s talents were those of solidity rather than brilliancy. He was not a boaster nor freely expressive of his knowledge, but was well posted in his profession and was always on good terms with his brethren. He especially excelled in surgery and obstetrics, his skill in both being from natural aptitude. His army experience had largely aided his skill as a surgeon, while that of obstetrics had grown upon him, through the exceptionally large practice given him by his gentleness and kindliness of manner, aided by an untiring patience and a coolness that never flurried to hinder his success or make nervous his patient. In this department he stood at the head of his profession in his section and for many years he numbered more than one hundred obstetric cases yearly.

1830: C. Trowbridge operated a soap and candle factory. – Catskill Messenger, published by Ira Du Bois. Not sure of any relationship. 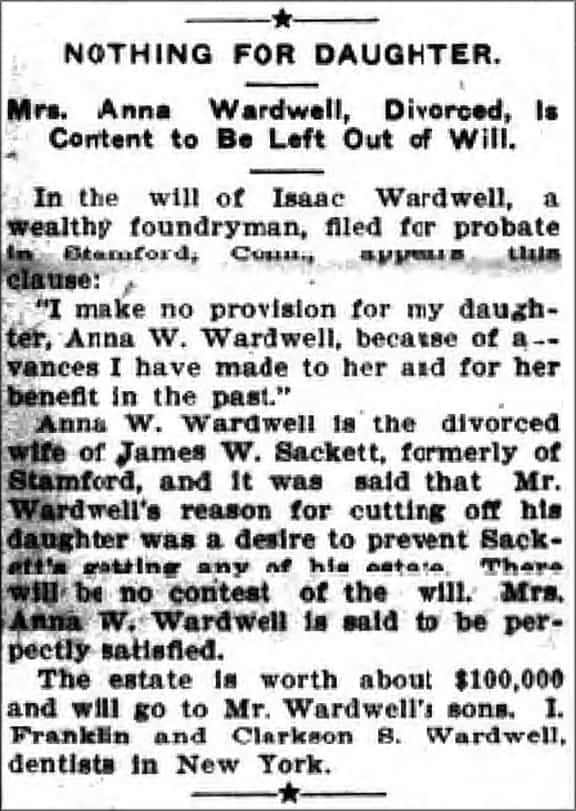 Wardwell’s Daughter Get Nothing (see below) – The New Rochelle Press, Saturday, June 10, 1905 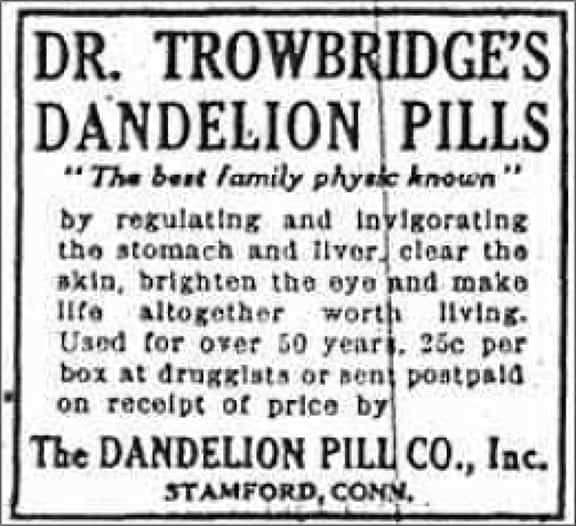 Ferdinand Meyer V is a native of Baltimore, Maryland and has a BFA in Fine Art and Graphic Design from the Kansas City Art Institute and School of Design. Ferdinand is the founding Principal of FMG Design, a nationally recognized design consultation firm. Ferdinand is a passionate collector of American historical glass specializing in bitters bottles, color runs and related classic figural bottles. He is married to Elizabeth Jane Meyer and lives in Houston, Texas with their daughter and three wonderful grandchildren. The Meyers are also very involved in Quarter Horses, antiques and early United States postage stamps. Ferdinand is the past 6-year President of the Federation of Historical Bottle Collectors and is one of the founding members of the FOHBC Virtual Museum.
View all posts by Ferdinand Meyer V →
This entry was posted in Bitters, Ephemera, History, Medicines & Cures, Trade Cards and tagged advertising, bitters, card, Clasen, Connecticut, Dandelion, dentist, Franklin, Gourd, Hoyt, Isaac, Stamford, trade, Trowbridge, Wardwell. Bookmark the permalink.