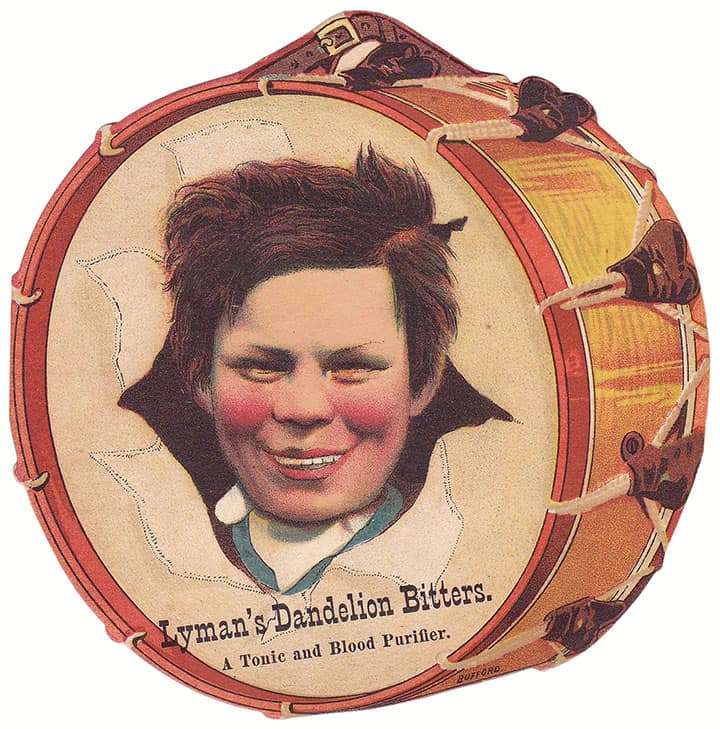 Yet another dandelion bitters, this time put out by Caldwell Sweet & Brother in Bangor, Penobscot, Maine. We are now talking about Lyman’s Dandelion Bitters. 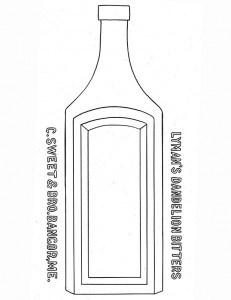 There is also an listing in Bitters Bottles for an older bottle. 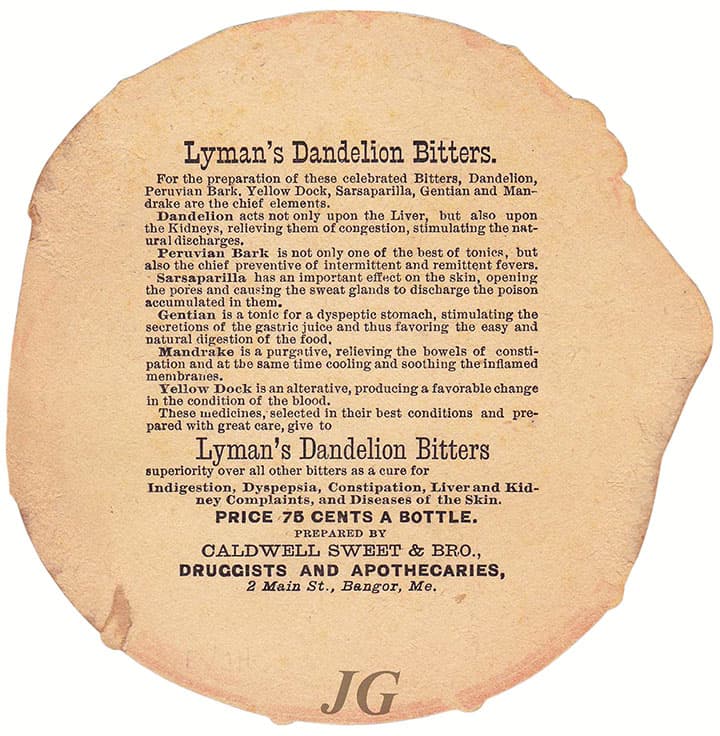 Caldwell Sweet was born around 1850 in Bangor, Maine. He and his brother were both natives of the city and sons of Abel S. and Abbie B. (Clark) Sweet, who had moved, while each was single, from Atkinson and Damariscotta, respectively, to Bangor, where they were married. 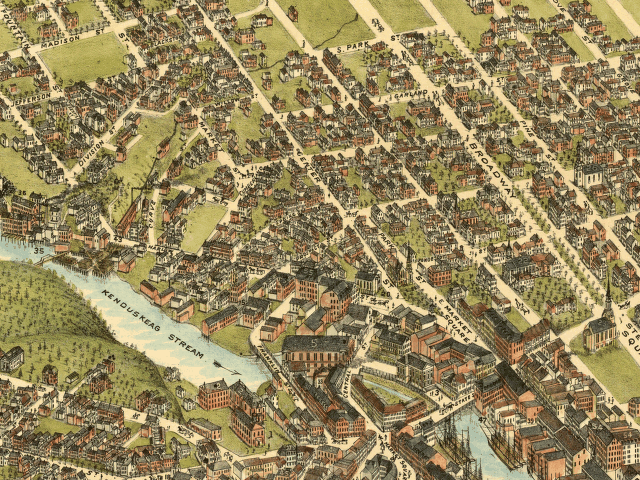 Caldwell Sweet seemed destined to be druggist. He initially clerked in a drug store in Bangor at B.F. Bradbury in 1869 and then moved to J.F. Patten in the same capacity. Sweet was prosperous in business from the beginning. In 1873, starting with a total capital of five hundred dollars, he partnered with N. S. Harlow, as Harlow & Sweet, in a drugstore just opposite his eventual 2 Main Street address. He sold out his interest after about a year, and engaged in the same line of trade under the old Harriman House, on Main street, which burned down, where he partnered in February 1874 with Isaiah S. Emery, the firm name being Sweet & Emery. They too burned down in December 1874 which marked a good time to dissolved the partnership. Caldwell Sweet then took over the business at 2 Main Street, one month later now, in 1875.

In March, 1877, Caldwell Sweet added his brother, Abel S. Sweet, Jr., who had some experience with him in the business, as a partner. Their trade steadily increased, and they had one of the finest drug stores in Eastern Maine, with perhaps the largest prescription business in the city. They were also largely in the wholesale trade, commanding purchasers not only from the Penobscot, but the Piscataquis and Aroostook Valleys, and other parts of the State. 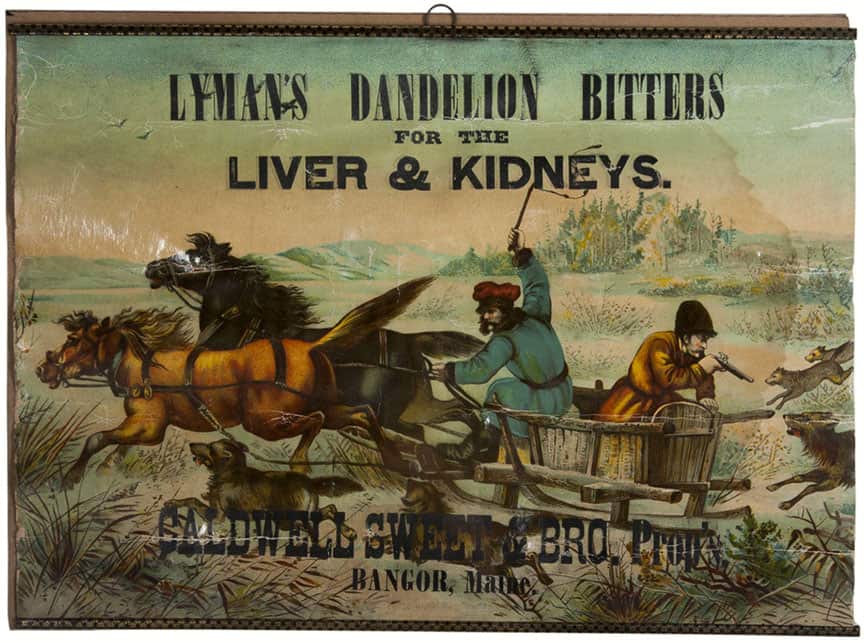 The Lyman’s Dandelion Bitters starts showing up in advertising in 1883 and ends in 1886. Unfortunately I have no idea who Lyman was though there is a Lyman, Maine which is southwest of Bangor. Two advertising examples are represented below. The brothers said that Lyman’s Dandelion Bitters was not a patent medicine which is interesting. They said it was a simple, safe, specific remedy and tonic for diseases of the blood, liver, kidneys, skin and stomach. I guess you had to take something else for a headache, but no, there bottle label says it will cure a ‘headach’ though they spelled it wrong.

I also have not personally seen any examples of this bottle as it is extremely rare. 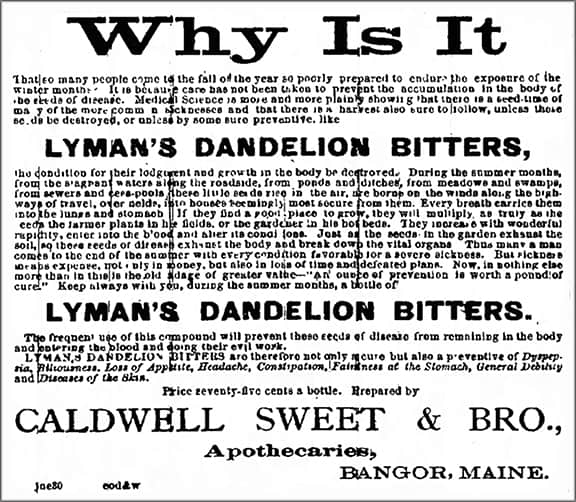 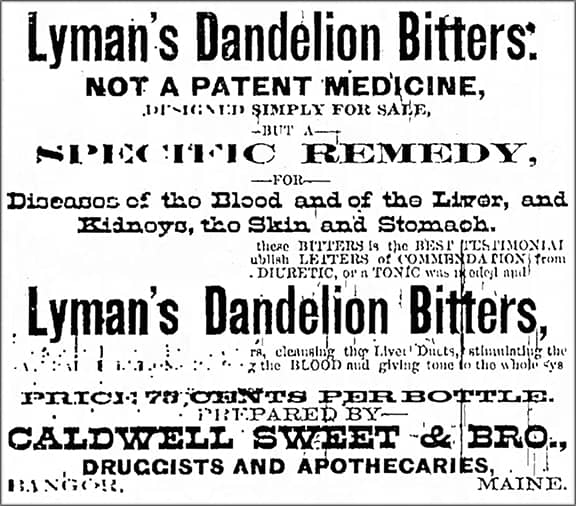 All of these fine trade cards are from bitters ephemera authority Joe Gourd who graciously helps support many of my bitters posts. We can date these cards to 1883 to 1886 because of the 2 Main Street address. 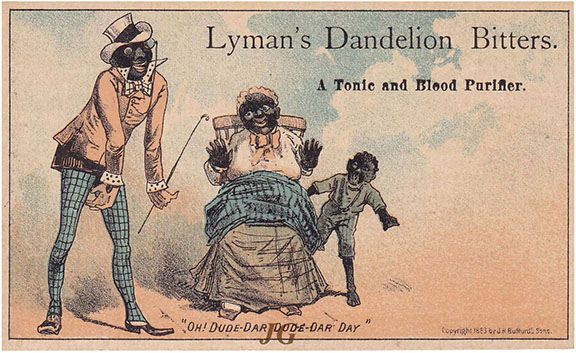 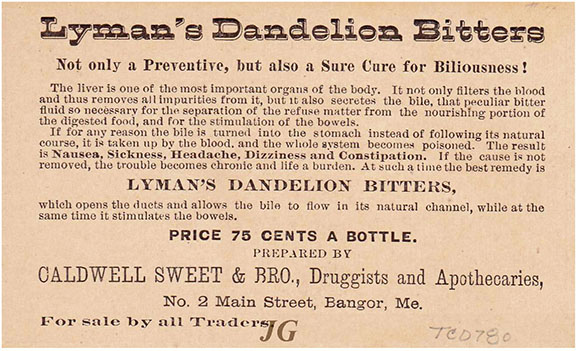 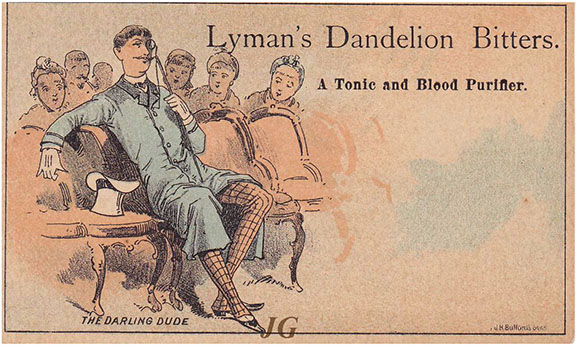 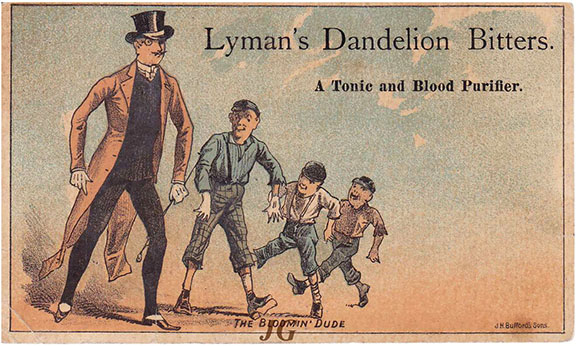 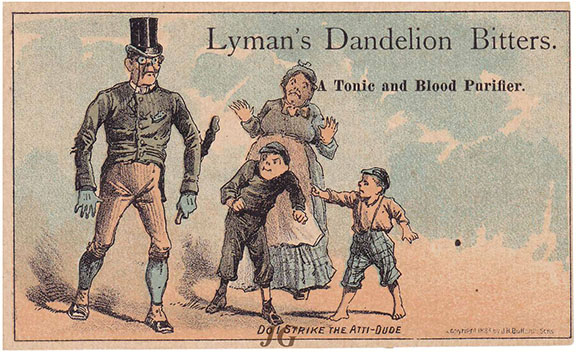 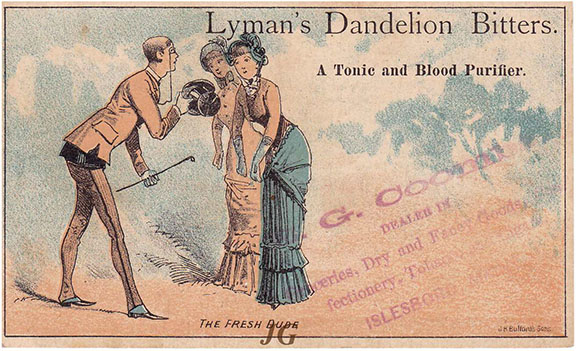 Here are few later pieces below that indicate that Caldwell Sweet Company changed yet again in 1906 when they were incorporated. We can see listings for the company all the way into the 1920s. 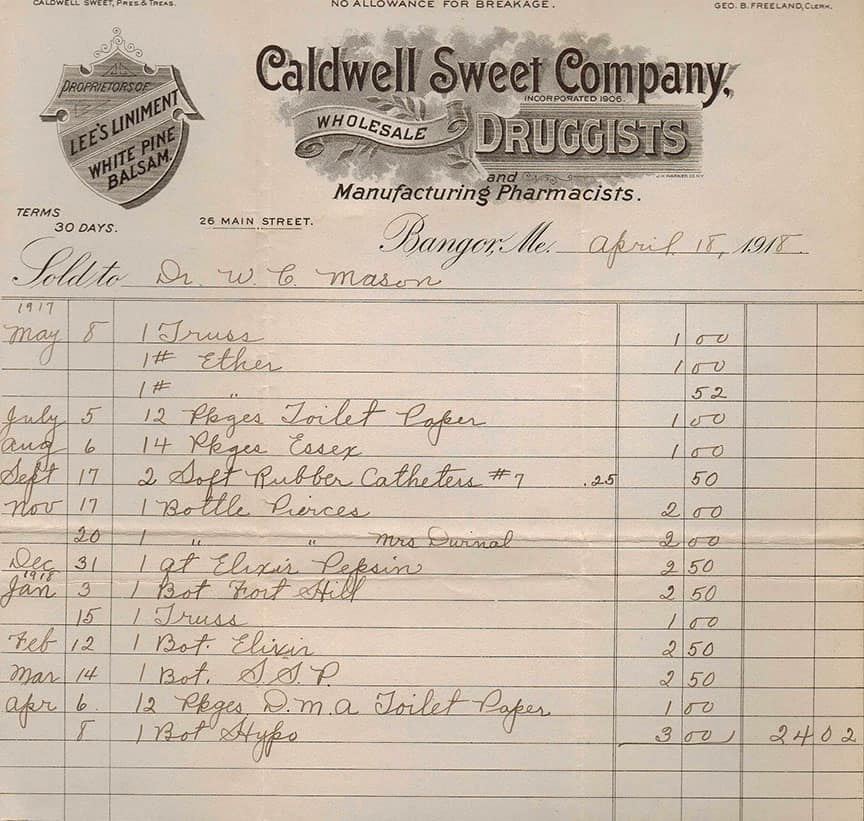 Caldwell Sweet & Bro., Wholesale Druggists, and Dealers in Surgical Instruments and Dental Goods, Corner Main Street and West Market Square. Those extremely fortunate individuals who, possessing a combination of rugged health and extreme good luck, are consequently enabled to entirely dispense with medicines of any kind, are wont to assume a superior air, and declare that drugs do more harm than good, but we have noticed that when disease does overtake them, they are generally apt to cry as loudly for pills and potions as anybody. It is foolish to deny the importance of drugs in civilized life, and, indeed, it is amply proved by the number of houses handling the same, one of the largest Bangor concerns of this kind being that conducted by Caldwell Sweet & Bro., at No. 2 Main Street, and 22 and 24 West Market Square. This was founded in 1874, and has attained its present high standing in the mercantile community solely by dint of hard and persistent work, honorable business methods, and particularly by handling only strictly reliable articles. The firm is made up of Messrs. Caldwell Sweet, and A. S. Sweet, jr., both these gentlemen being natives of Bangor. Three floors and a basement are occupied, 20 x 61 feet in dimensions, as well as a storehouse having the same number of floors and measuring 30 x 70 feet. It will be seen that ample accommodations are at hand for an immense stock, but large as they are, they are fully required, as the magnitude of the wholesale and retail trade done by this house necessitates the carrying of a heavy and varied assortment. In addition to their other goods, they carry a full line of everything needed for the most thoroughly equipped dental rooms in the land, and have been appointed agents for the S. S. White Dental Manufacturing Co., and also carry a complete assortment of their goods, the best to be found in the market, while at the same time they furnish supplies from other well-known manufacturers. Messrs. Caldwell Sweet & Bro. keep constantly on hand the best quality of Nitrous Oxide Gas. Their arrangements are such that they will be able to furnish dentists with their supplies at the same rates they would pay if they ordered direct from the manufacturers. In the filling of orders from dentists out of town they have the aid of a practical dentist. The firm are proprietors of the well-known and popular preparations Salvatine, Keuchen Cura, Lyman’s Dandelion Bitters, Lee’s Liniment and Warren’s Balsam, and report a very large sale of these goods,as well as of Surgical Instruments, of which they handle the latest improved types. 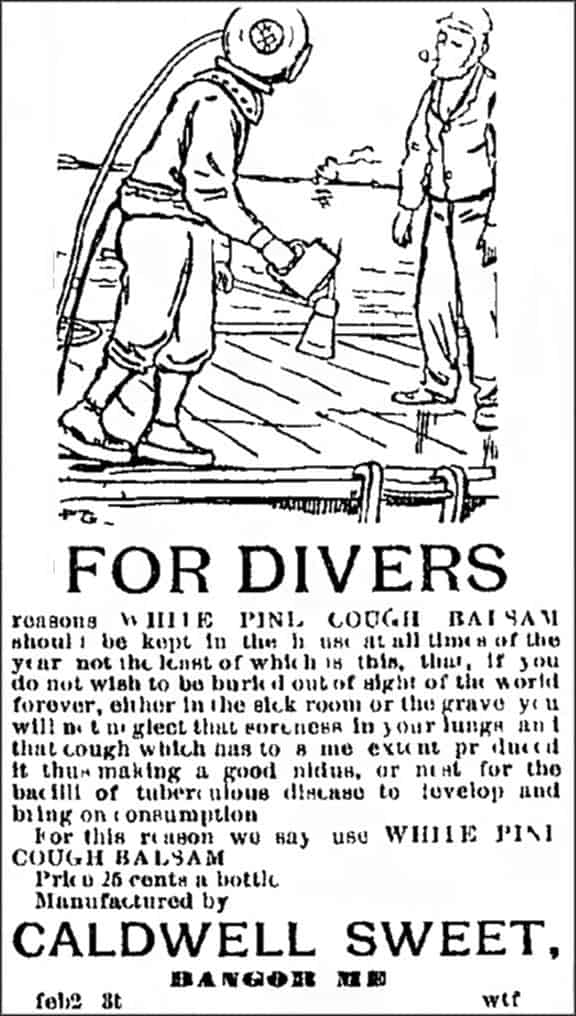