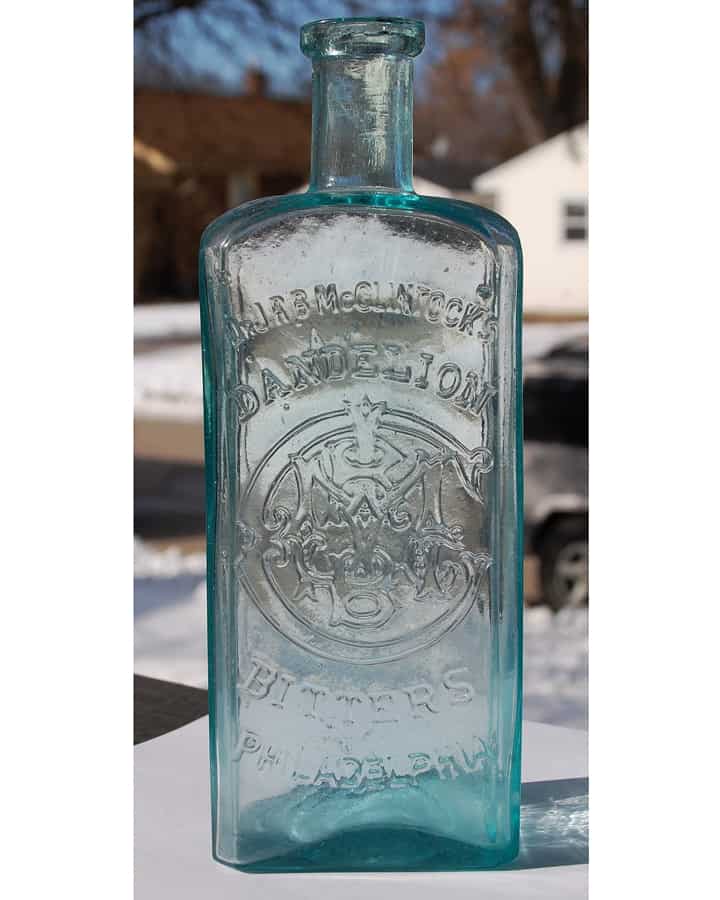 Closing on ebay last night (for the 2nd time) was an extremely rare aqua bitters put out by Dr. J. R. B. McClintock of Philadelphia. See eBay listing: Antique Dr. JRB McClintock’s Dandelion Bitters Bottle Philadelphia NICE! It took me a little while, as I almost settled on James R. McClintock as the namesake, until I discovered he had a son. Jesse R. B. McClintock.

John McClintock (1784-1856) (wife Martha McMacklin), father of James R. McClintock, emigrated from Tyrone county, Ireland, in the year 1807. During the following year he moved to Philadelphia and engaged in mercantile pursuits, and was for many years successful, but in the sequel experienced the reverses almost inseparably from such business in this country.

Dr. James McClintock, M.D. (1809-1881) was born in Lancaster county in 1809 and died on 18 October 1881 in Philadelphia. He was very prominent and well known as a physician. He was also a Professor at the Philadelphia College of Medicine (Dean and Professor of Principles and Practice of Surgery).

Dr. Jesse R. B. McClintock (abt 1839 – 1891) was the son of James and grandson of John. The J.R.B. initials on the Dandelion Bitters pictured above should be Dr. Jesse McClintock. Jesse practiced at 823 Race Street with his father James. Later with a listing of J.R.B. McClintock & Co.

Jesse’s father James commenced the study of medicine in the office of Dr. John Eberle, in 1826. The medical profession was the object of is boyhood dreams; he would be a doctor, and not only that, but he would be a “head doctor.” From The Medical Advisor by James McClintock – 1855 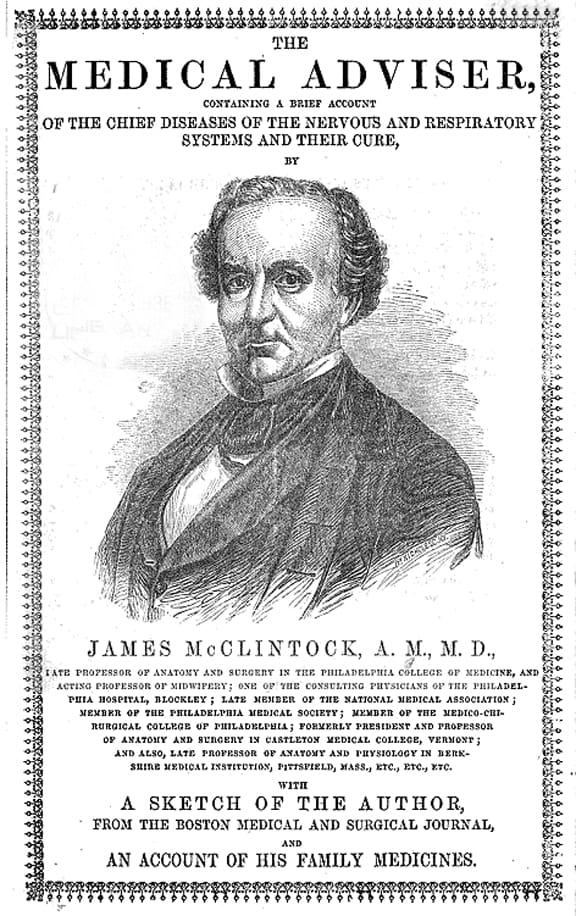 The Medical Advisor by James McClintock – 1855 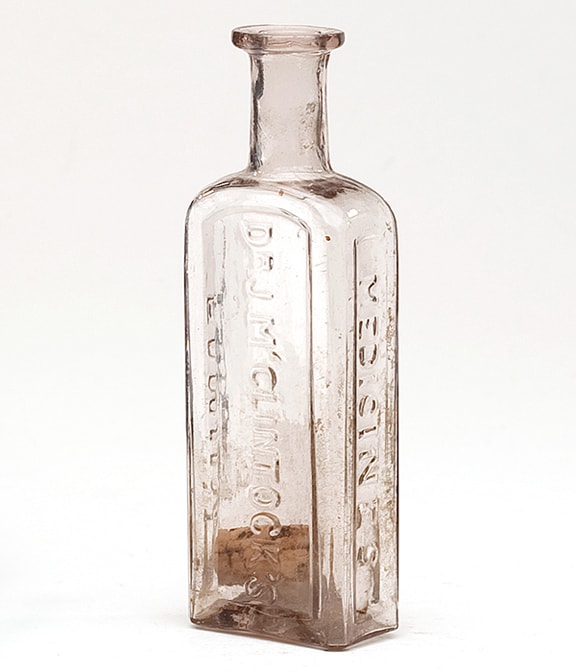 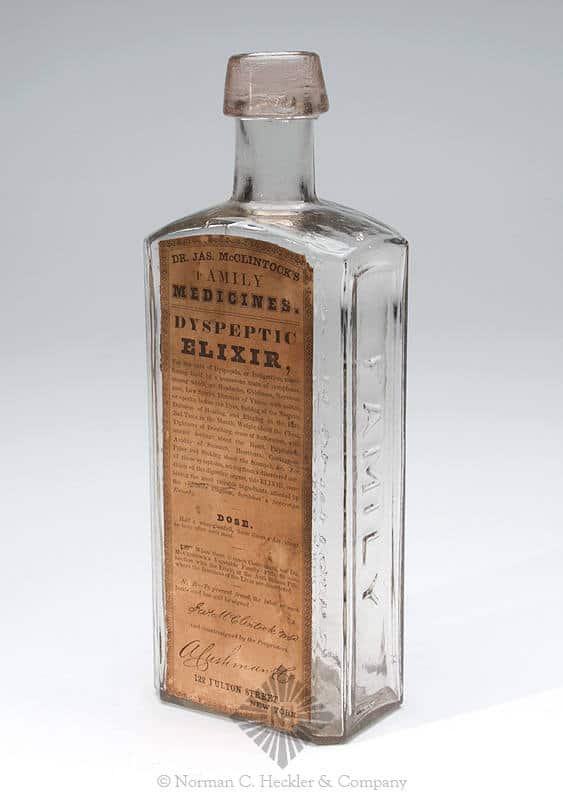 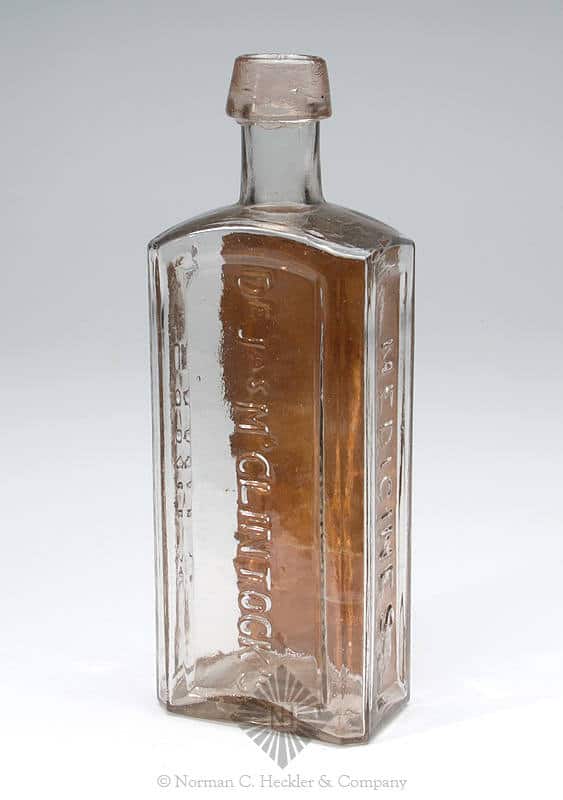 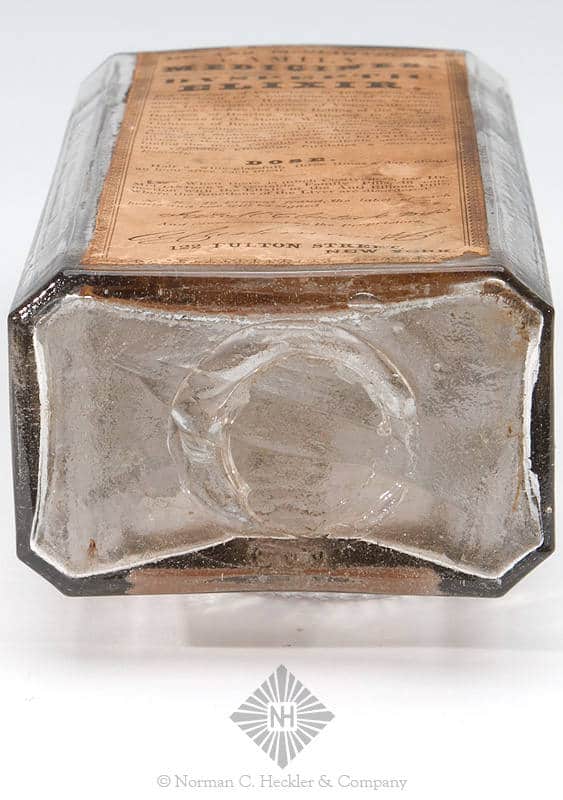 The Philadelphia College of Medicine had its origins in the Philadelphia School of Anatomy, which was established by James McClintock in 1838. In 1847 McClintock obtained a charter from the Pennsylvania Legislature to establish the Philadelphia College of Medicine. He had organized the school in 1846, holding classes that winter and summer in the building of the Philadelphia School of Anatomy on Filbert Street above Seventh Street. With the charter, McClintock’s school had the power to confer degrees to students. The year the charter was obtained, the College moved to new facilities at Fifth and Walnut Streets which had originally been constructed for the Supreme Court of Pennsylvania. The five story building contained two lecture rooms, an anatomical theater, a museum, a dissecting room, classrooms, and rooms for professors. In addition, the College included a pharmacy department to instruct advanced students. Students had access to Pennsylvania Hospital, Wills Hospital, and the Philadelphia Dispensary for clinical instruction. By 1858 the College was experiencing financial difficulty, and reached an agreement with the Medical Department of Pennsylvania College by which the two schools would merge in 1859. The Medical Department faculty would resign, and the faculty of the Philadelphia College would assume the name and operate as the Medical Department of Pennsylvania College. Eventually that institution closed in 1861. 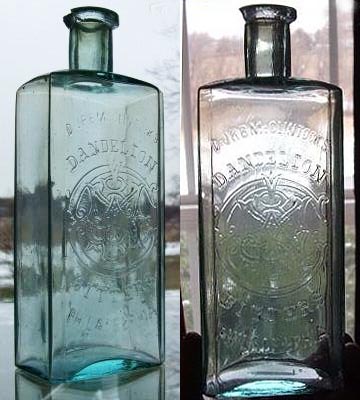 McClintock’s Dandelion Bitters was put out and marketed by Jesse R .B. McClintock in Philadelphia. I am sure he was hoping to follow in the footsteps and the success of his famous father and his many medicinal products. At this point I can only find one product by Jesse. The Carlyn Ring and W.C. Ham listing in Bitters Bottles is as follows: 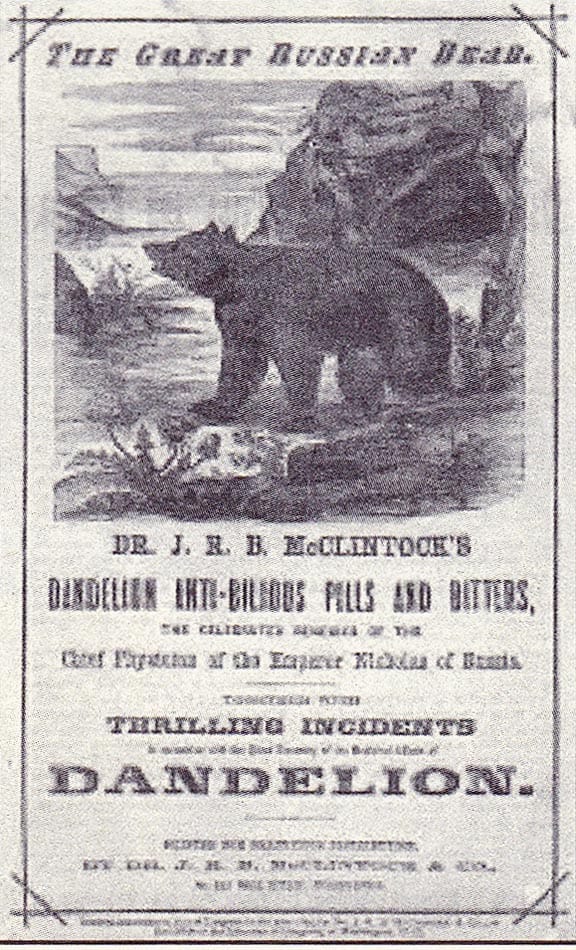 Ferdinand Meyer V is a native of Baltimore, Maryland and has a BFA in Fine Art and Graphic Design from the Kansas City Art Institute and School of Design. Ferdinand is the founding Principal of FMG Design, a nationally recognized design consultation firm. Ferdinand is a passionate collector of American historical glass specializing in bitters bottles, color runs and related classic figural bottles. He is married to Elizabeth Jane Meyer and lives in Houston, Texas with their daughter and three wonderful grandchildren. The Meyers are also very involved in Quarter Horses, antiques and early United States postage stamps. Ferdinand is the past 6-year President of the Federation of Historical Bottle Collectors and is one of the founding members of the FOHBC Virtual Museum.
View all posts by Ferdinand Meyer V →
This entry was posted in Bitters, Druggist & Drugstore, eBay, History, Medicines & Cures and tagged bitters, Dandelion, James R. McClintock, Jesse R. B. McClintock, John McClintock, M.D., McClintock, Philadelphia. Bookmark the permalink.