The Dandelion & Wild Cherry Bitters has been sitting on a shelf in my aqua bitters room since 2004 when I secured it in a Glass Works Auction. A plain but really neat bottle that is rather old. This is another installment in our Dandelion Bitters series.

There are actually three embossing variants; one has “AND“, the other “AND” and the other “&” between DANDELION and WILD CHERRY BITTERS. It would be pretty cool to have all three together but rather difficult to achieve as all three variants are extremely rare. The Carlyn Ring and W.C. Ham listing in Bitters Bottles is as follows: 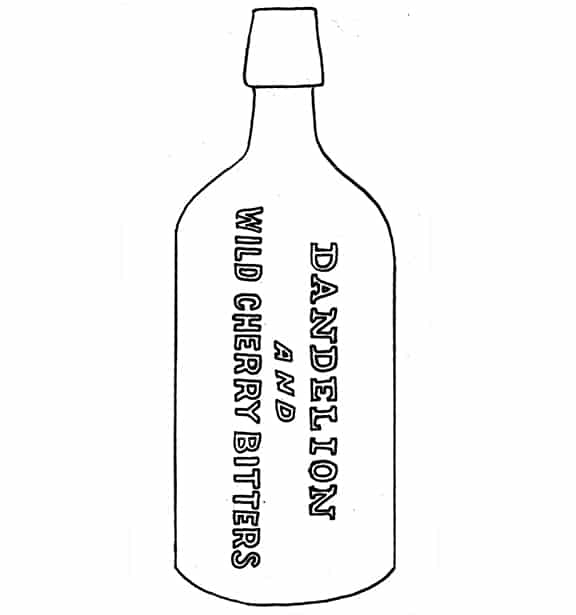 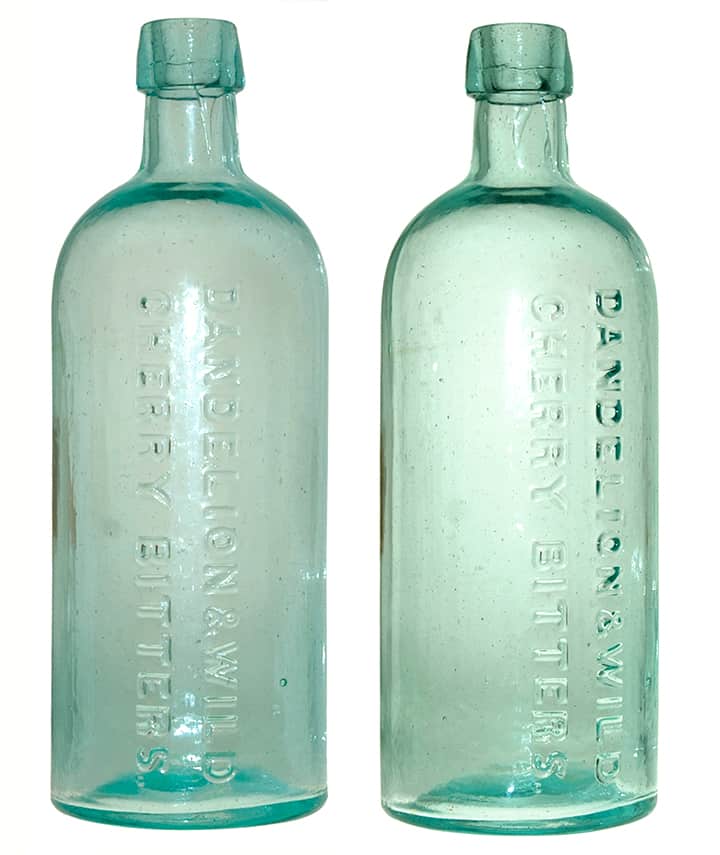 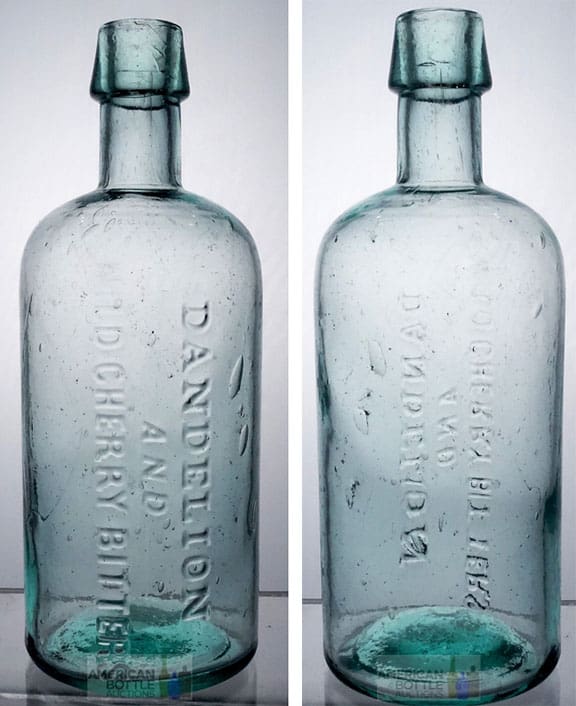 DANDELION & WILD CHERRY BITTERS. D-14. 7 ¼” Applied top. And yet another bitters in aqua. So many of these are in great condition, this one grades a 9.2 with a little scratching. The slanted AND is an anomaly and never seen before on any example known according to consigner. – American Bottle Auctions 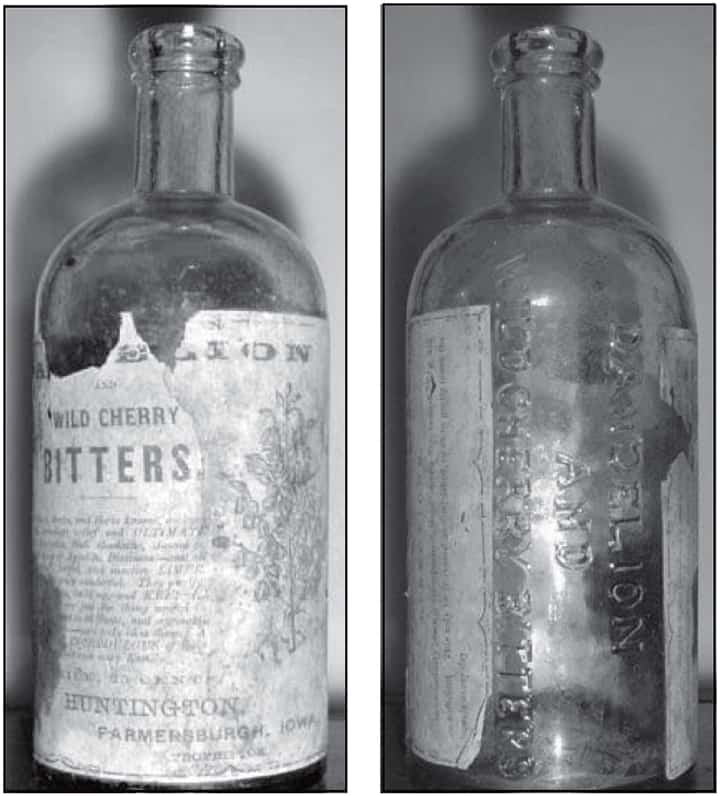 Not much is known about Samuel Huntington other than that he was a dealer in patent medicines and a druggist in Farmersburg, Clayton County, Iowa in 1862 when he was first promoting his Dandelion and Wild Cherry Bitters. There is also a Huntington’s Writing Fluid and a Lightning Fly Killer mentioned in period advertising. Two advertisements below supports this statement. Interesting that one advertisement for Dandelion and Wild Cherry Bitters is from a St. Paul, Minnesota newspaper and the other is from Manitowoc, Wisconsin. You have to remember that these were Civil War years and record keeping was laxer and the men usually were sparse and few between.

The Dandelion and Wild Cherry Bitters were first sold in Farmersburg in 1862 for 25 cents for pint bottles and 50 cents for quart bottles. By 1863 the pint bottles were being sold at 50 cents and the quart bottles for 75 cents. Later in McGregor, in 1865, they were increased to 75 cents for pints and 1 dollar for quarts. I guess that was Civil War inflation. I have never seen the smaller size. Huntington said that his bitters contained the best Roots, Barks and Herbs and were best used for liver ailments.

Samuel and Henry Huntington seem to disappear after 1865. I am sure at some point they will show up elsewhere. Some might be tempted to relate this brand to the Dr. Huntington’s Golden Tonic Bitters from Portland, Maine in 1876. This is a different brand. 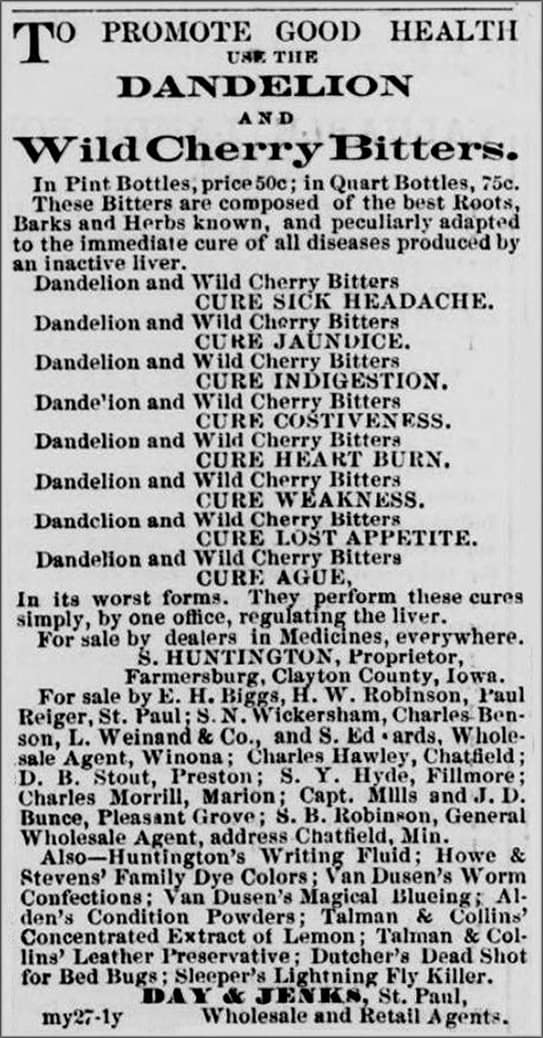 The small town of Farmersburg is just west of McGregor, Iowa where Huntington sold the bitters in 1863. Farmersburg was first called Windsor when it was surveyed in 1856. The name Farmersburg was given by Thomas Street, a son of General Street, when he was in command here. Street and others laid out the plat for a village on what is commonly known as the old Billy King land, south of National, very near where Mr. Crosby put down on his map “Ancient Farmersburg.” They gave the name of Farmersburg to this place, which name was first given to the post office and then to the township.

The first settlement was made in 1846, by Peter Eastman, on the J.P.L. Clark place, section 13. Other early settlers were W. Barber, D. Barber, M. Vansickle, Joseph Tassro, Obediah Brown, John Francis, James Jones, William Linton and M.B. Sherman. The township was organized in 1850.

The village of Farmersburg was surveyed in March, 1858, by Norman Hamilton. The first building erected on the site of the village, was built in 1848 by Alva Hazen, and was built of logs. It was soon after converted into a school-house, and used as such for sometime for the surrounding community. The next building was erected by Joseph Shaft, on the corner of section 22, and was afterward fitted up by A.M. Cortis for a residence. The next house was built in 1852 by Silas T. Woodward, one of the early pioneers of Farmersburg, and now a resident of Elkader. He built it for a store, and purchased a few dollars worth of goods at Prairie du Chien; but he never opened store, and used his building as a school-house, while he performed the duties of teacher. In 1853, P.R. Moore brought from Galena the first goods of any note, purchased the building of Mr. Woodward, and opened the first store in the village.

The first blacksmiths were Messrs. Peter & Slaughter. W.W. Goodwin came soon after. He has followed his trade for twenty-six years. Mr. Alger was the first shoemaker. He is now in Dakota. A saw-mill was built in 1855, by William Harrar. This burned down, and was rebuilt by Calvin Miller. It is now used as a store-house and stable. The school is graded into two departments. It was begun twenty-six years ago. The teachers are Lucy Kingsley and Inez Woodward. [Farmersburg Township History, Clayton County, Iowa] 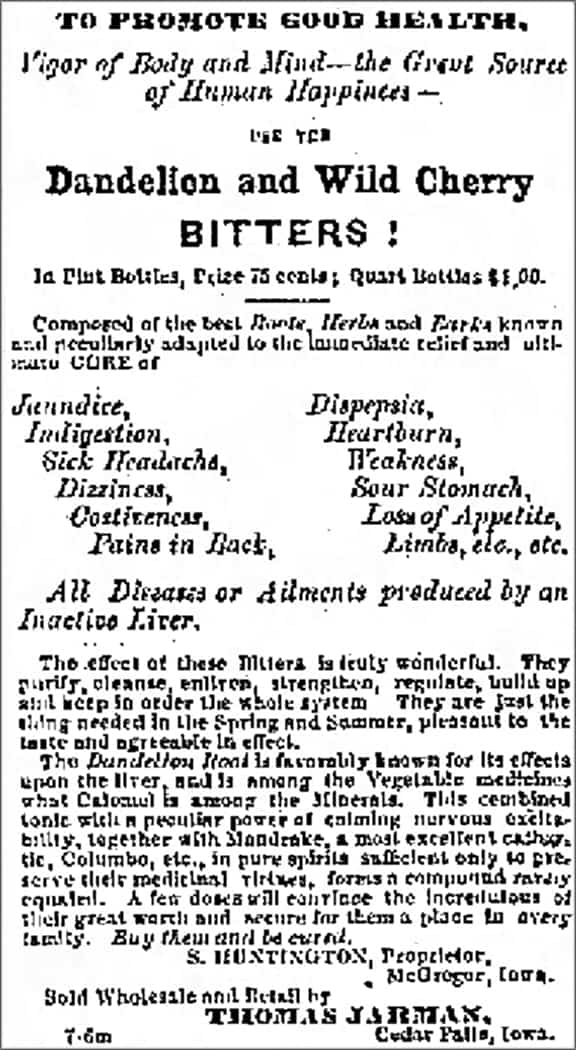 As noted above, Samuel Huntington must have moved from Farmersburg to McGregor, Iowa in 1865 as he was selling his Dandelion and Wild Cherry Bitters in advertisements with a McGregor address as you can see in the advertisement above. In 1865, The Iowa State Gazetteer also lists a H & S Huntington and a S. Huntington & Co., (Henry and Samuel Huntington) as dealers in Patent Medicines and Drugs. Davenport, Iowa was also listed with McGregor, Iowa. In 1879, Huntington’s Celebrated Dandelion and Wild Cherry Bitters, from Dubuque, Iowa was listed in the Internal Revenue Record and Customs Journal. 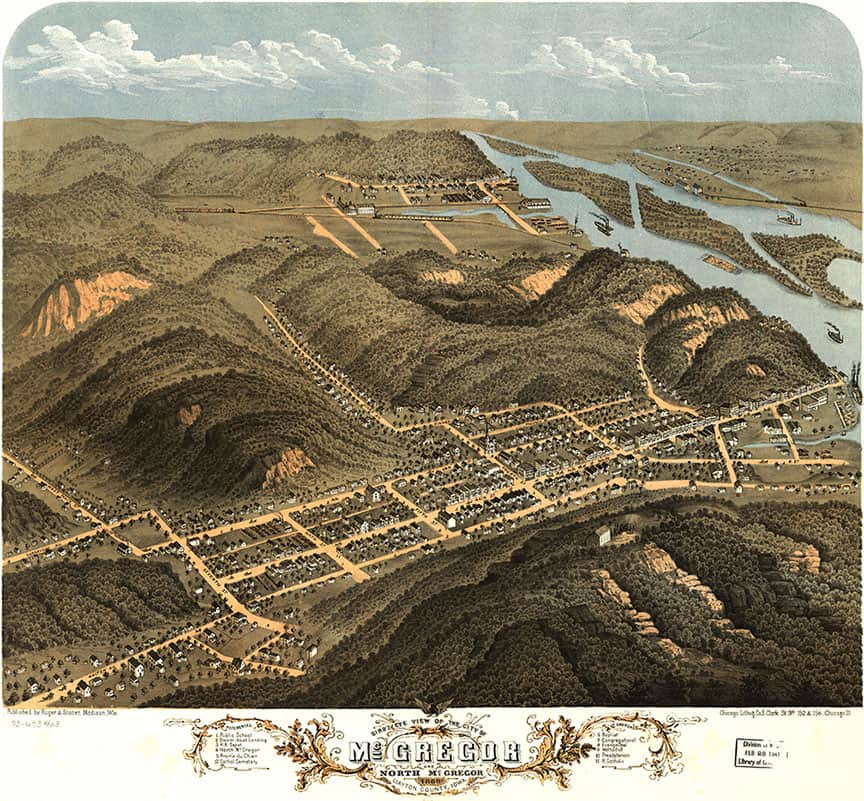 McGregor was founded as MacGregor’s Landing in 1847 by Alexandar MacGregor, a descendant of Rob Roy MacGregor, and the area around MacGregor’s Landing was settled by the extended family. In 1849 it was reported that the original MacGregor seal and signet were owned by Alex MacGregor. The Scots Gaelic clan seal was inscribed, “S’ Riogal Mo Dhream/ Een dhn bait spair nocht”, which was interpreted as “Royalty is my race / End do and spare not“. The signet was a bloodstone from Loch Lomond, and was sketched by William Williams. 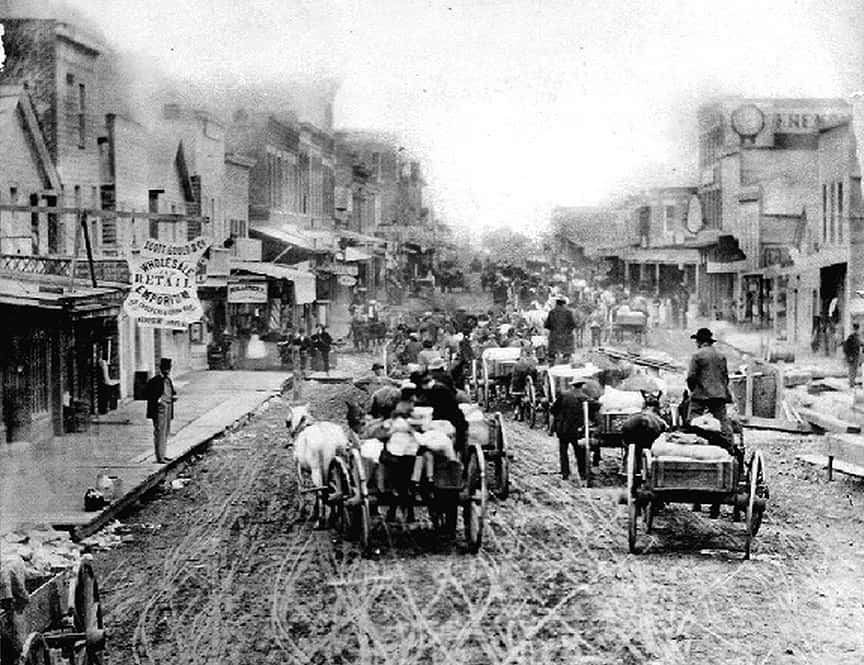 Since 1837, MacGregor had been operating a ferry across the Mississippi River between Prairie du Chien, Wisconsin and the present site of McGregor, Iowa. MacGregor planned the new city as a six block development, and it was quickly populated, being incorporated as McGregor in 1857. In that same year, the Milwaukee & Mississippi Railroad finished building a railroad track from Milwaukee, Wisconsin to Prairie du Chien, Wisconsin, thus connecting Lake Michigan with the Mississippi River by rail. McGregor quickly became a major commercial center, and served as a hub where grain from Iowa and Minnesota could be transported across the Mississippi and sent on to Milwaukee via railroad. More railroads were built to connect McGregor with cities further west, and the city of North McGregor (now Marquette, Iowa) was established just north of the city to serve as the city’s railroad terminus. After reaching McGregor from the west, trains were disassembled and railroad cars were ferried across the Mississippi to continue on towards Lake Michigan. 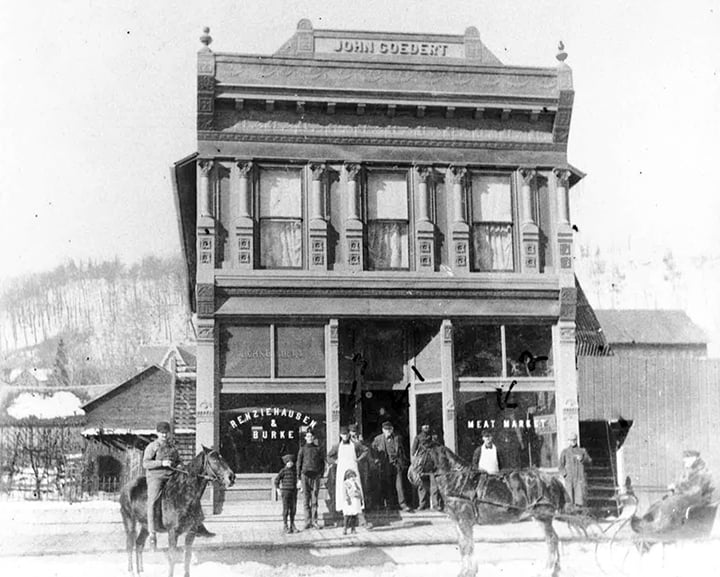 John Goedert Meat Market, 322 Main St., McGregor, IA. Installed over an 1850s building in 1889, this two-story complete front by Mesker Brothers Iron Works is virtually the same today as it appears in this historic photo from 1902. Image courtesy of Barbara Corson.

During the 1870s, the population of McGregor exploded to over 5,500 as the city became the busiest shipping port west of Chicago. In 1874, the system of ferrying railroad cars across the river between North McGregor and Prairie du Chien, Wisconsin, was brought to an end when Prairie du Chien businessman John Lawler commissioned the construction of a permanent pontoon bridge to connect the two cities’ rail lines. As the need for men to disassemble and ship trains across the river disappeared, the city’s population began to decline. Today the city’s history is preserved in its downtown business district, which contains many buildings constructed during the city’s boom years. Because of its colorful history and location beside the Mississippi River, the city has become a popular summer tourist destination, and it is known for its many antique stores. [Wikipedia]

Ferdinand Meyer V is a native of Baltimore, Maryland and has a BFA in Fine Art and Graphic Design from the Kansas City Art Institute and School of Design. Ferdinand is the founding Principal of FMG Design, a nationally recognized design consultation firm. Ferdinand is a passionate collector of American historical glass specializing in bitters bottles, color runs and related classic figural bottles. He is married to Elizabeth Jane Meyer and lives in Houston, Texas with their daughter and three wonderful grandchildren. The Meyers are also very involved in Quarter Horses, antiques and early United States postage stamps. Ferdinand is the past 6-year President of the Federation of Historical Bottle Collectors and is one of the founding members of the FOHBC Virtual Museum.
View all posts by Ferdinand Meyer V →
This entry was posted in Advertising, Apothecary, Bitters, Druggist & Drugstore, Medicines & Cures. Bookmark the permalink.