Rees’ Orange Tonica – The Best Bitters in the World The Best Bitters in the World

Well, this is the last advertising trade card from authority Joe Gourd in the Orange bitters series. I thought that maybe this would be one of the more difficult bitters to identify but that is really not the case. All of the clues are on the front of the card and represented on the illustrated bottle label, including “Risley & Company”, “New York” and “151 Chamber Street”. The calendar on the reverse of the trade card, actually dates the product with “1882”.

Rees’ Orange Tonica, “The Best Bitters in the World”, was put out by Charles F. Risley & Co. in New York City. Charles was the son of nationally known druggist, Hubbell W. Risley. Their most successful product seemed the be THE PHILOTOKEN or FEMALES FRIEND which was a “cure for painful menstruation” (see label proof below). The Risley name was huge in the drug world starting with Hubbell W. Risley who was born in New York City near Pearl Street and Cherry in 1807. At the ripe young age of 15, he worked at Ayer’s Drug Store in Bridgeport, Connecticut and by his 18th birthday was hired in Middletown, Connecticut by Haviland, Keyes & Co., Druggists, to go to Augusta, Georgia to represent the firm there.

Risley thrived in Augusta with the business now renamed, Haviland, Harral & Risley. They had four large drug houses including one in New York City, one in Augusta, one in Charleston and one in Mobile. For several years, the firm did the most drug business in the country. Around 1858, James Harrral and Hubbell Risley sold their southern branches and focused their business operations in New York City. Haviland retired and a new co-partnership was formed between Harral, Risley & Kitchen (William K. Kitchen). They operated two large stores at the corner of Reade and Church Streets where they conducted business for two or three years. When Kitchen retired, Charles F. Risley, James Harral, Jr. and Charles H. Thompson became members of the firm and continued business at 140 Chambers Street until about 187o when the business was dissolved and Charles F. Risley & Co. was formed. This is when Rees’ Orange Tonica first makes an appearance, with alcohol. The product had a long run and eventually ended up as a vegetable tonic, probably because of prohibition.

Rees’ Orange Tonica is also unlisted in Bitters Bottles and Bitters Bottles Supplement. Please make note that the word “Bitters” is only used in marketing phrases and advertising. I do not believe a bottle exists with the word ‘Bitters” on it. abt 1825: In Middletown, Connecticut, Risley engaged by large drug firm there, Haviland Keyes & Co. to go to Augusta, Georgia to represent the firm there.

abt 1825 – 1855: Risley thrives in Augusta, Georgia with Haviland, Harral & Risley. They have four large drug houses, one in New York City, one in Augusta, one in Charleston and one in Mobile.

abt 1858: James Harrral and Hubbell Risley sell their southern branches and focus on New York City. Haviland retires and co-partnership formed between Harral, Risley & Kitchen (William K. Kitchen). Had two large stores at the corner of Reade and Church Streets. Did business for two or three years. When Kitchen retires, Charles F. Risley, James Harrall, Jr. and Charles H. Thompson become members of the firm and continued business at 140 Chambers Street until about 187o when the business is dissolved. 1872: The advertisement below was run in the 1875 John F. Henry, Curran & Co.’s Catalogue. – HairRaisingStories.com Notice Morgan & Risley. There must have been other drug co-partnerships. 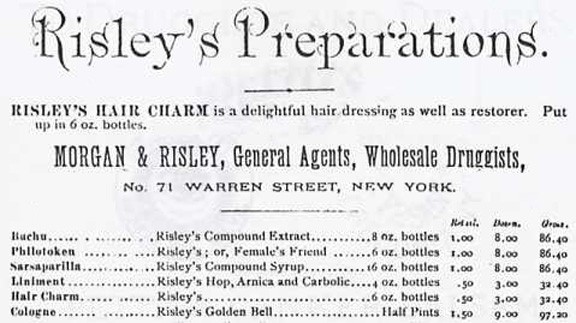