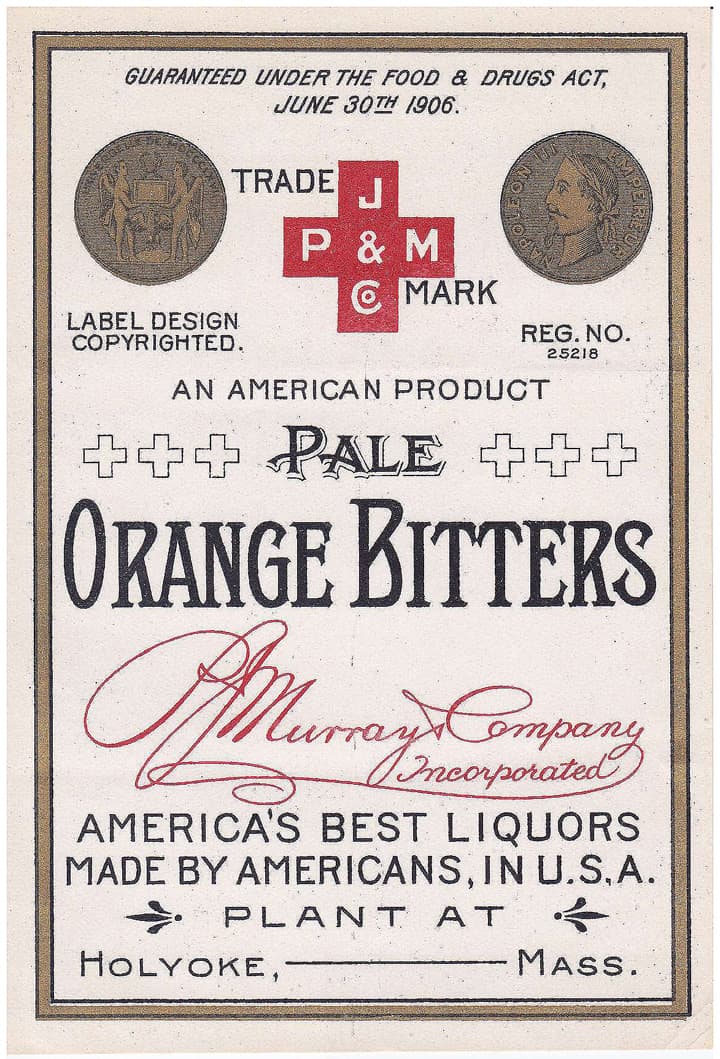 Is P.J. Murray watching over my shoulder as I write this post? Does he know that I am looking at one of his advertising trade cards (top, Joe Gourd Collection) for Pale Orange Bitters and snooping around the ruins of his once thriving distillery and speakeasy in Holyoke, Massachusetts? It is rumored that his spirit inhabits “Ye Olde Bud” as it is affectionately called by locals. I don’t know, but I just had a chill go down my spine a moment ago. I am near a window in my old warehouse studio and that will happen when the wind is blowing. The wind is not blowing this morning as the cold front passed and we have blue sky. 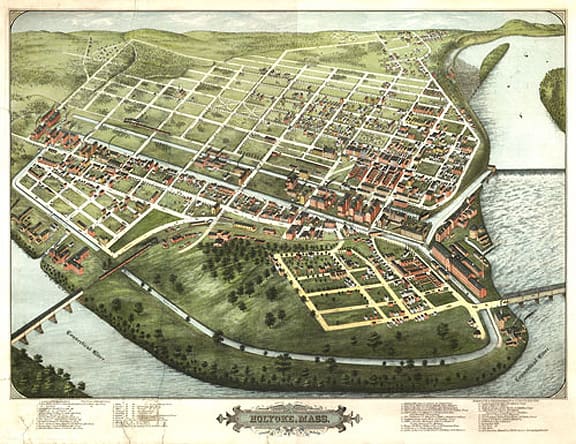 Holyoke was settled in the mid-1700s along the Connecticut River and was originally a farming community with few inhabitants until the construction of a dam and the Holyoke Canal System in 1849. With the subsequent construction of water-powered mills, particularly paper mills, the city grew. At one point, over 25 paper mills were in operation and the population rose from just under 5,000 in 1860 to over 60,000 in 1920. In 1888, Holyoke’s paper industry spurred the foundation of the American Pad & Paper Company, which as of 2007, is one of the largest suppliers of office products in the world. The map above pictures the following establishments. Look how many are paper and cotton houses.

Irishman, Patrick J. Murray was born in Pennsylvania in either 1861 or 1862. He and his clan came to Holyoke, Massachusetts and started their liquor business at 30 John Street, across from City Hall, sometime in the 1890’s. They may have been around earlier in the 1860s after arrival from Ireland though information is hard to come by. There are like, 10 or so Patrick Murray’s running around in the vicinity during this era. Kind of a common Irish name. The building structure that Murray added on to was one of the original stage coach stops between Boston and Albany. The remainder of the building was constructed in the late 1890’s and was known as the PJ Murray distillery. 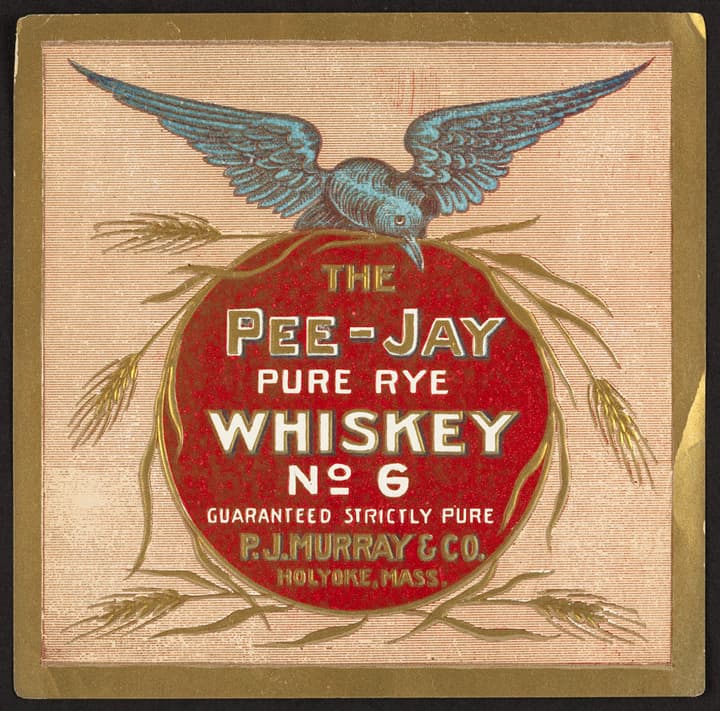 Around the turn of the century, Murray no longer made a profit at distilling whiskey and he became an importer, wholesaler and distributor. Some of the brands he sold or represented were Pee-Jay Pure Rye Whiskey No. 6 (pictured above), Hermitage Sour Mash Rye Whisky (pictured below) and Murryego Slivowica which was made for the Polish market (see below). 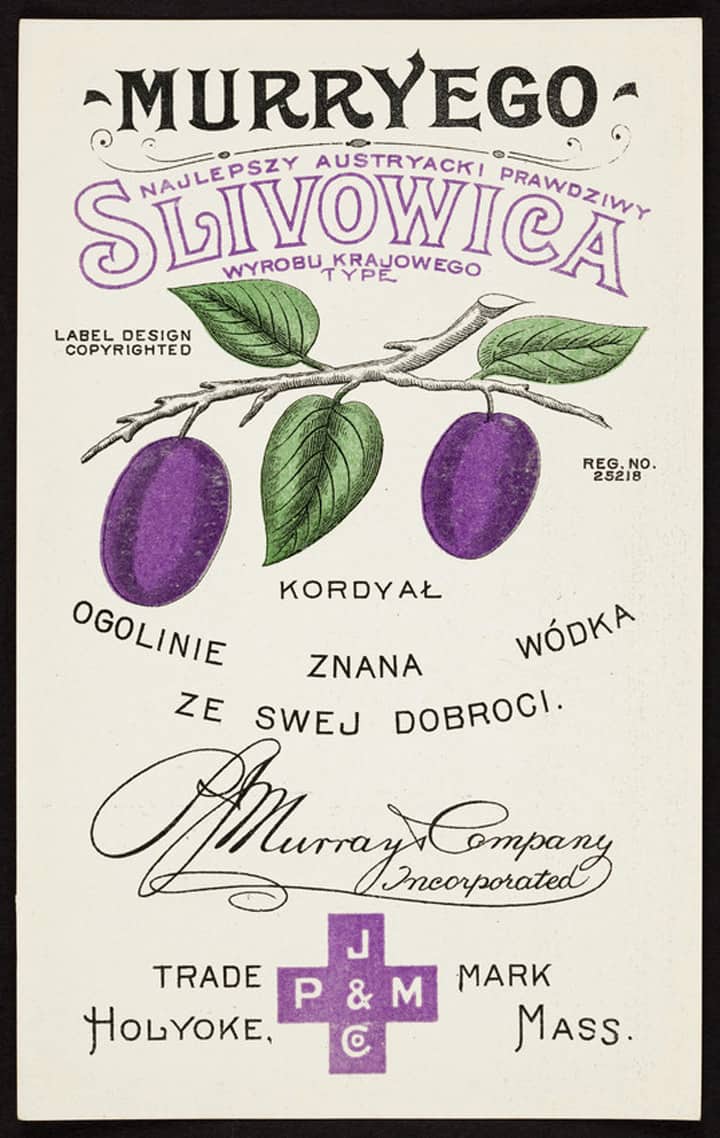 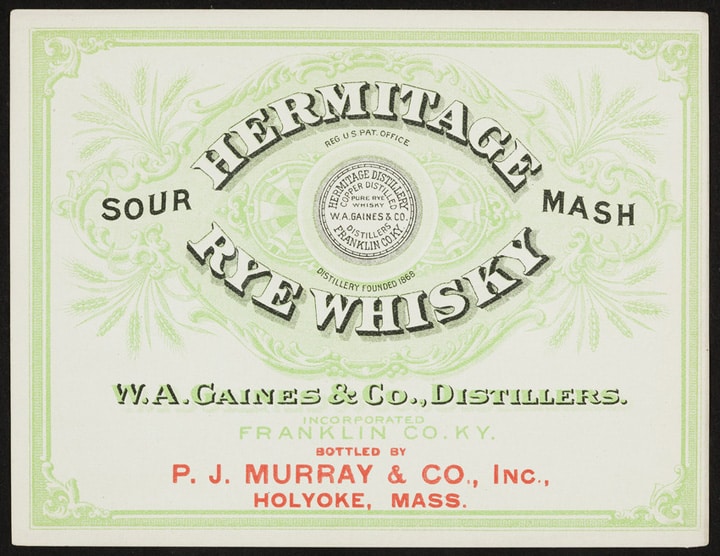 It looks like Patrick Murray first went into the saloon business around 1899 partnering with a fellow named Kelley. The establishment was called the Murray Saloon and it was located at 407 High Street. In 1913, the whole ground floor of Murray’s, John Street building, was opened as a saloon. Later some called it the “Bud”, possibly in honor of the fact that in 1903, Murray had become the first area distributor of Budweiser Beer for Anheuser-Busch east of the Mississippi. He was also the president of Bud Wine Liquor Company.

It was rigged with flashing lights to warn patrons of impending raids. There were escape routes through passageways behinds fireplaces on each floor and apparently a tunnel leading from the basement of City Hall to the basement of Murray’s saloon.

The PJ Murray distillery also housed a working-mans bar in this blue collar town. Women were not really accepted in bars then. His Pale Orange Bitters trade card says, “An American Product”, “Made by Americans in the U.S.A” and “America’s Best Liquors” to counter the European versions of Orange Bitters flooding the market. I am humming Springsteen’s “Born in the U.S.A” now.

Prohibition closed the first floor saloon, but a speakeasy, stocked with PJ’s own liquor, remained open. It was rigged with flashing lights to warn patrons of impending raids. There were escape routes through passageways behinds fireplaces on each floor and apparently a tunnel leading from the basement of City Hall to the basement of Murray’s saloon. It is said that the mayor and police chief used to visit the speakeasy after hours using this tunnel. Also, the hostess station in the main dining room was hollow. Inside the station was a ladder leading to the basement and then to two double doors exiting to John Street. Yet another convenient escape route used during raids. [Ye Old Bud Part 2] 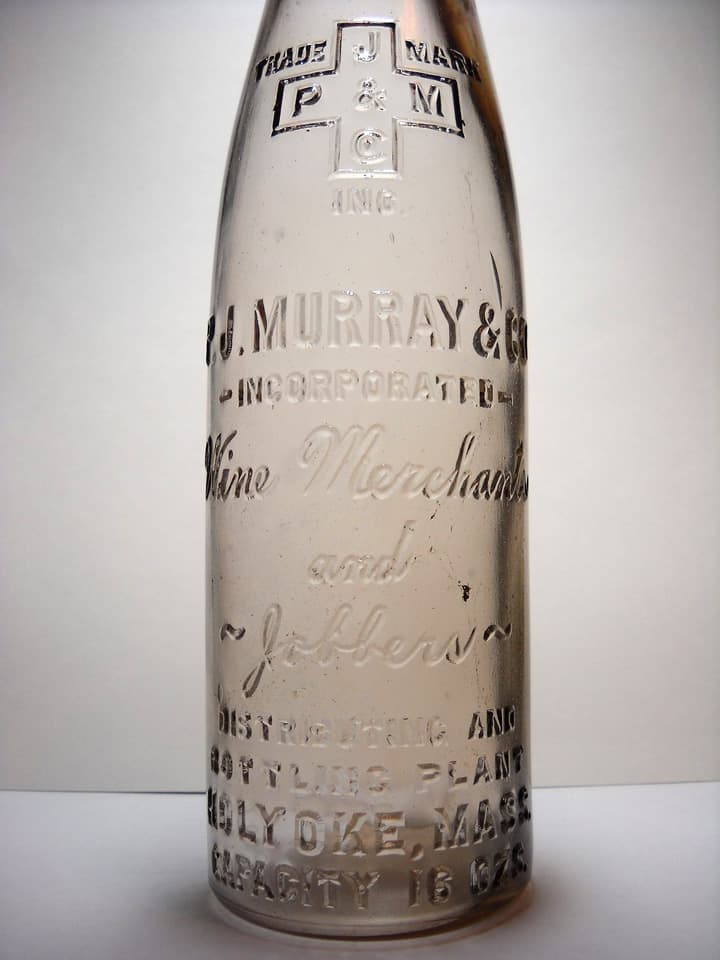 The brass trough that runs along the base of the main bar was equipped with running water. Its original purpose was to be used as spittoon. In those days however, if a man left a bar on a Friday night to find a bathroom he would normally lose his seat. Therefore, the trough was on more than one occasion used as a urinal. In fact, the main bar displayed a brass splatter shield. [Ye Old Bud Part 2]

It is told that Joseph Wilbur Murray (PJ’s nephew) kept a masonry worker and cabinet maker busy throughout the entire great depression. Each week he would have a new project for them. This is the prime reason for the unique nature of the building. It is said that the woodwork, hand chiseled fireplaces and unique masonry work were the result of thousands of hours of work.  [Ye Old Bud Part 2] 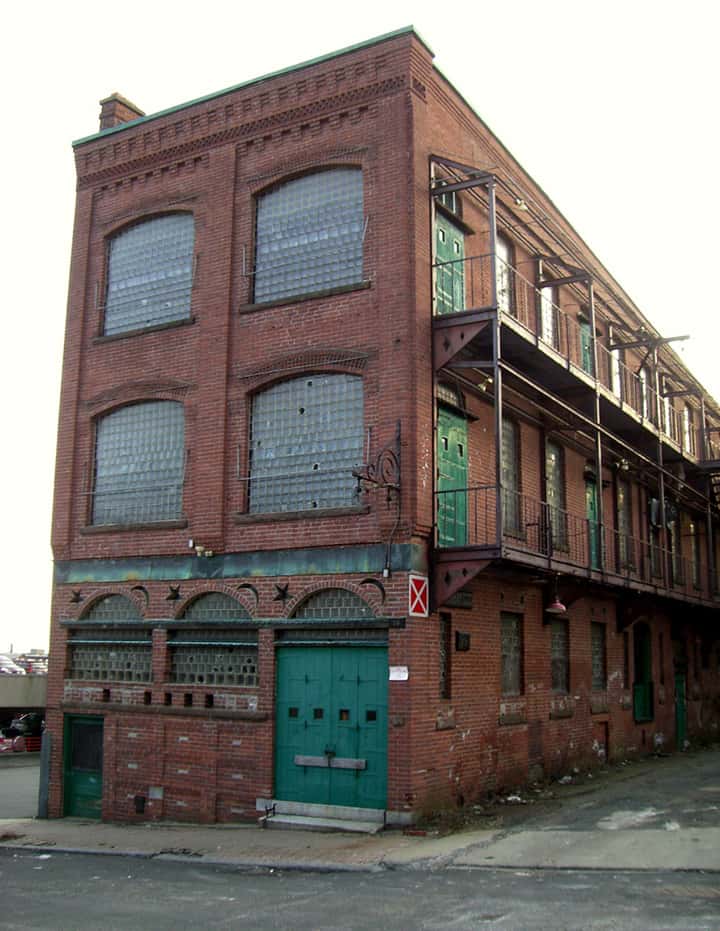 The old “Bud” building in Holyoke, Mass. across from City Hall was where Patrick Murray ran his distillery and wholesale liquor business. It may have been named after a long-gone Budweiser Beer distributorship. The building once housed the Smokin’ Gun Lounge, the Carnival Night Club and the Caribbean Restaurant.

In later years, the “Bud” held other colorful establishments such as the Smokin’ Gun Lounge, the Carnival Night Club and the Caribbean Restaurant. The structure is now vacant on 30 John Street and is on the Holyoke Historic Inventory and a possible candidate for restoration or adaptive reuse. The Bud certainly has a twisted and colorful history.

Legend also says the ghost of PJ Murray haunts the Bud. Ex-bartenders and regulars at the establishment still talk of strange happenings over the years.

Legend also says that the ghost of PJ Murray haunts the Bud. Ex-bartenders and regulars at the establishment still talk of strange happenings over the years. The most recent incident was an encounter by one of the patrons with the ghost in the men’s restroom. This sighting was written up in the Holyoke Transcript. No one is sure whether this is the ghost of PJ Murray or his nephew, Joseph Wilber Murray (b. 6 May 1892), who inherited the establishment. 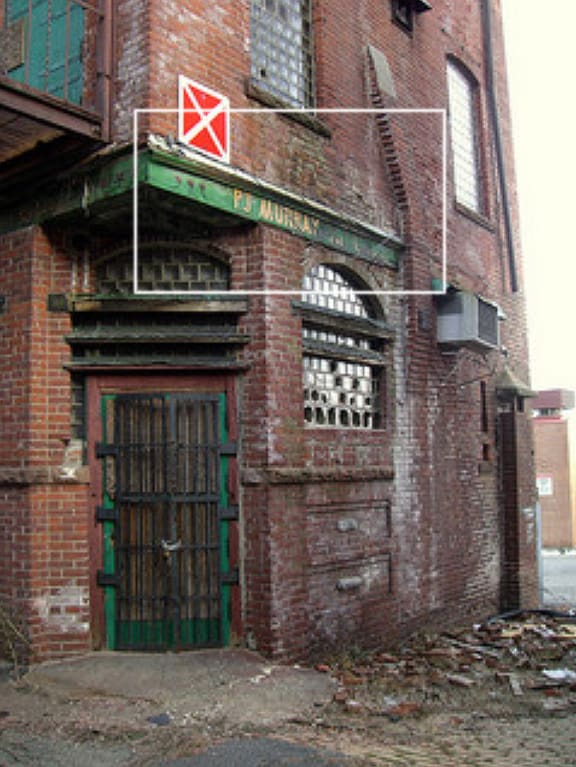 The P.J. Murray building, whose namesake is talked of as being the The Bud’s resident ghost. See the old green PJ Murray sign above the door.

Workers used to throw these silver dollars up on top of the back bar. A few years ago, the back was taken down for renovation and hundreds of old silver dollars were found behind the bar.

There is still a faded, lead-painted sign on the rear of the building, which states, “This is a bar, not a bank.” It seems that Mr. Murray, being somewhat eccentric, had a never ending battle with the local banks. The mill workers were paid on Friday by check and the banks were closed by the time their work day ended. Mr. Murray obviously wanted the workers to have cash so that they might spend it at his bar. In an effort to force the banks to stay open, PJ Murray began cashing the workers checks and paying them in silver dollars. In a short period of time he created a shortage of silver dollars and longer banking hours. Workers used to throw these silver dollars up on top of the back bar. A few years ago, the back was taken down for renovation and hundreds of old silver dollars were found behind the bar. [Ye Old Bud Part 2]

As far as Murray’s Pale Orange Bitters goes, this must have been a short run, labeled bottle. I am not aware of any examples. This does not appear to be listed in Ring and Ham’s Bitters Bottles book though there are quite a few references to other Pale Orange Bitters, mostly European. I hope you like what I wrote PJ, if that is you.

Read: Holyoke’s ‘The Bud’ building inspires historians but deterioration and unpaid taxes might spell its doom