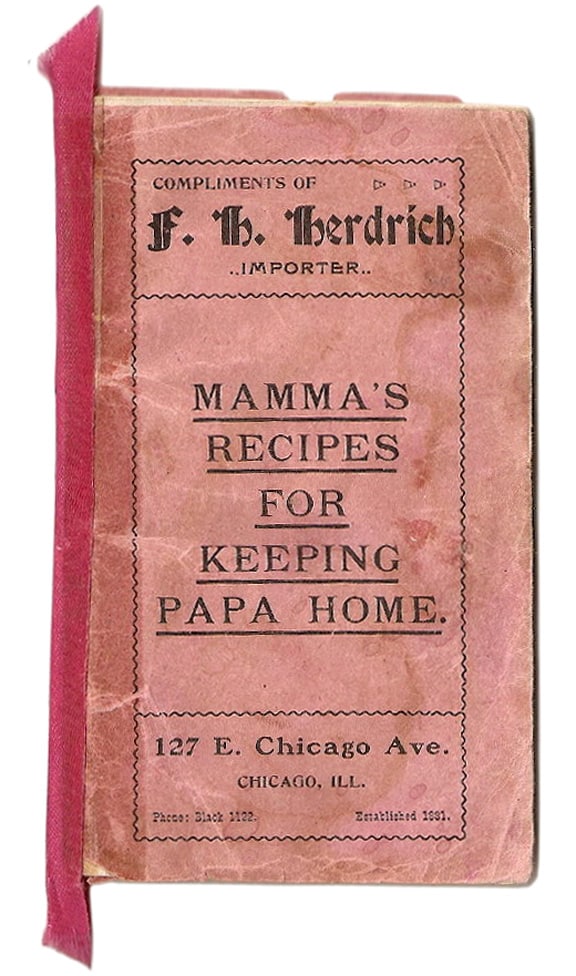 We wrote about Grandfather’s Perfect Orange Bitters the other day. Now we will look at “Papa” and some of “Momma’s Herdrich’s” recipes for keeping men home. The Herdrich family was quite large as you will see and they were operating three saloons at once while producing and selling alcohol. I think the men were busy most of the time with their businesses and spent their ‘free’ time hunting, fishing, drinking, and playing the tuba. Things German men do. The ‘mammas’ definitely needed to supply the papa’s with something as the menu book says.

We will be looking specifically at four bitters, three unlisted, from Chicago and represented by Frederick Harry Herdrich, importer from Germany. Within the “Recipe Book”, various spirits were advertised, such as Orange Tonic, Old ye Whiskey, Tippecanoe Kentucky Whiskey, Burgundy Wine Bitters, Holland Herb Bitters, Maryland Peach Brandy, and more. Unfortunately, only the cover is available online with descriptions of what is within.

What prompted this post was yet another very odd trade card from the Joe Gourd collection. Joe, himself lives in the Chicago area. The folding card is pictured below and notes the following bitters:

Here is to you Health 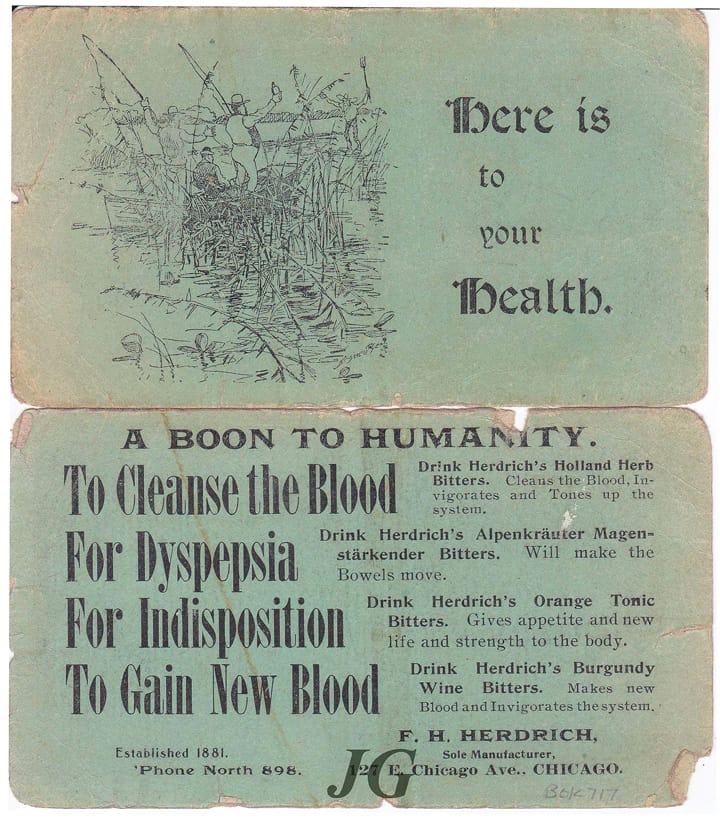 This has to be the only advertising trade card where the family is pictured both at a meal table setting and gathered outside. Frederick Henry Herdrich was a proud German and a true family man. In the trade card picture above and below, Frederick is most likely seated with close family members like his father Landolin Herdrich, and mother Barbara Weber Herdrich. His many brothers and sisters could have been there such as Charles, Anton, Josephine, Bertha, Landolin W., Heinrich, and Stella. Some of the others pictured might be children, such as Ophella E., Harry Frederick, Martha R., and Frederick C. Herdrich. His first wife, Anna Boos Hendrich may be missing and children from his second marriage may be present. This includes Ruth L., Harold E., Margaret A., Alan, and Ralph Cooley Herdrich. His new young wife Stella Mae, may be featured on the exterior setting posing upfront with the little ones. 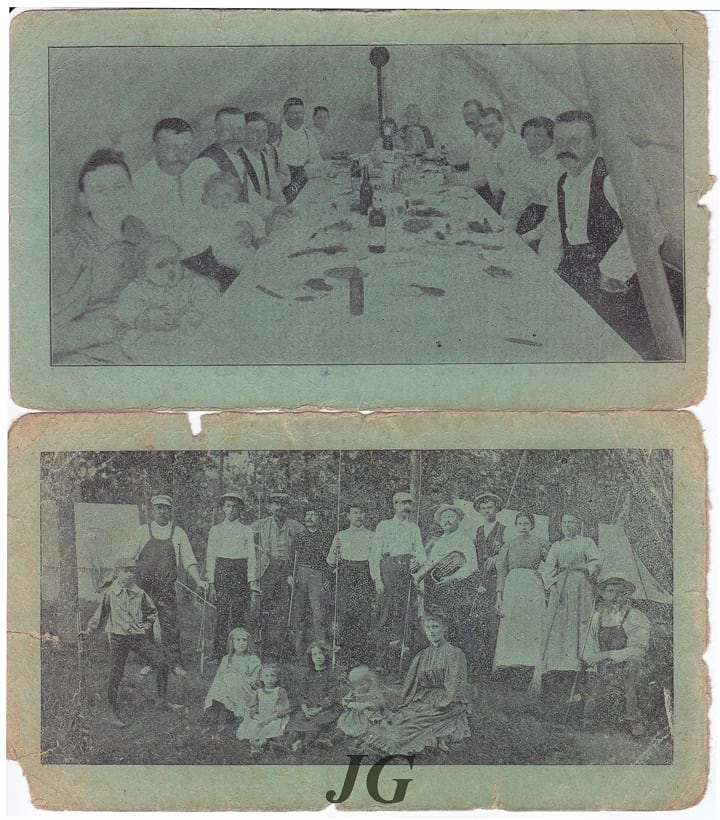 The exterior pose, presumably of the Herdrich family is a man’s picture. It looks like something that you might see within Field and Stream which was founded in 1895. Every male in the picture is holding something including, what I believe are shotguns, rifles, fly fishing rods, and a tuba! One of the stern women has a broom. The pretty lass in front might be Fredericks’s new, very young wife, Stella Mae. She was 28 and he was 55 at one point. I bet she knew how to keep ‘Papa’ home. 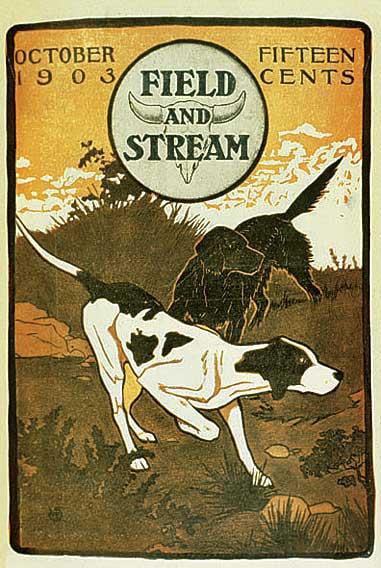 Looking at the illustration on the front of the card is interesting. You have to look close but you can see that there is three fly fisherman in a boat. Probably the three Herdrich saloon owners. One is holding up a bottle of bitters presenting it to an angry farmer with a pitchfork. Quite odd. I have enlarged and strengthened the art below. 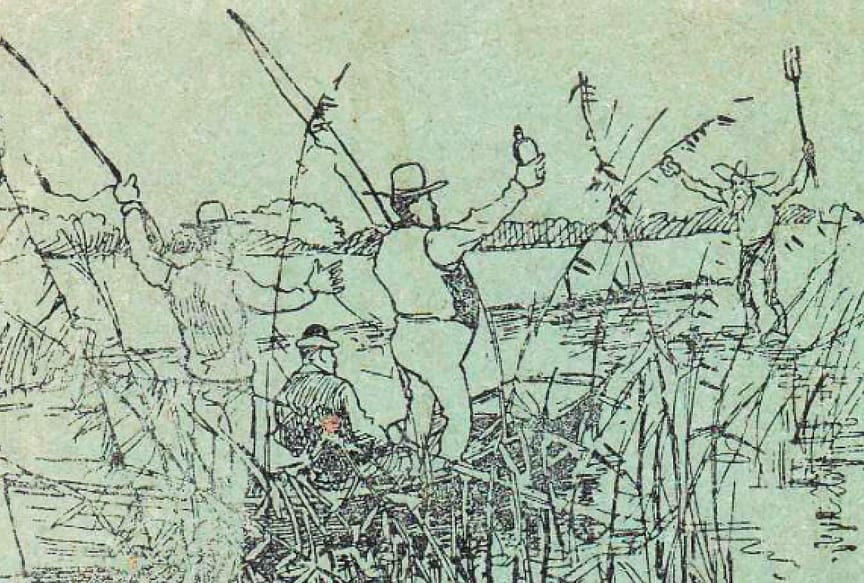 Another fun bitters to look at and learn about. Every bottle has a story. Here, I wonder why Frederich and Stella sold their new 10-room house and Chicago and why Stella went to Alabama. Did Fred go with her? He died in Chicago. Maybe the recipe didn’t work here.

1897: House built for F. H. Herdrich (see below). This house later sold in 1914 after Herdrich retires in Alabama.

1914: Mr. & Mrs. Fred H. Herdrich – Chicago Blue Book *House put up for sale because they have moved to Alabama (see listing below) 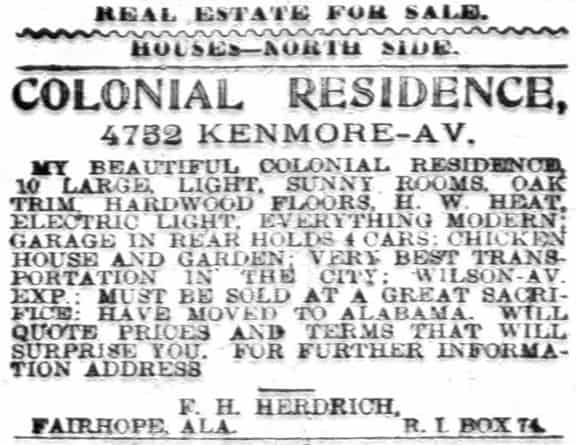 F. H. Herdrich puts Chicago house up for sale because he has moved to Fairhope, Alabama – Chicago Daily Tribune, 15 May 1914