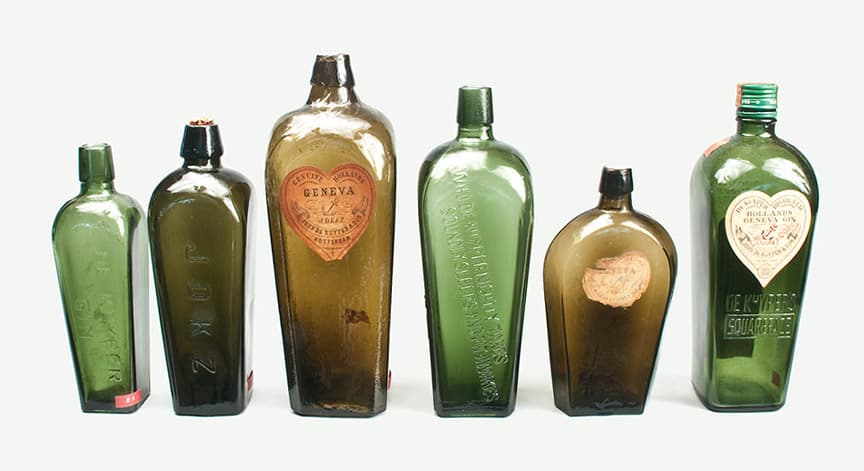 De Kuyper originated in 1695 in Holland when Petrus De Kuyper started manufacturing barrels and casks used in the transportation of spirits and beer. By 1752, the family owned a distillery in Schiedam which was then the leading center for the production of Dutch gin or genever.

Now we will jump forward to the early 1920’s in the United States when De Kuyper started their liqueur production. Over the course of the 1920’s and 1930’s, De Kuyper produced nearly twenty varieties of liqueur, including apricot brandy, cherry brandy, triple sec and crème de menthe.

From 1920-1934, the United States Prohibition was the legal act of prohibiting the manufacture, transportation and sale of alcohol and alcoholic beverages. This ban led some enterprising folks to start distilling their own alcohol at home. There was also a massive rise in organized crime relating to the production of illegal booze. At the height of his power, the gangster Al Capone employed more than 1,000 people!

De Kuyper then wisely entered into an agreement with National Distillers Products Corporation in New York regarding the sale of De Kuyper products and the joint establishment of a production unit in New Jersey. Permission to import and sell these orange bitters had also been obtained from the U.S. Bureau of Prohibition, Washington, D.C., per a letter of 30 July, 1927. 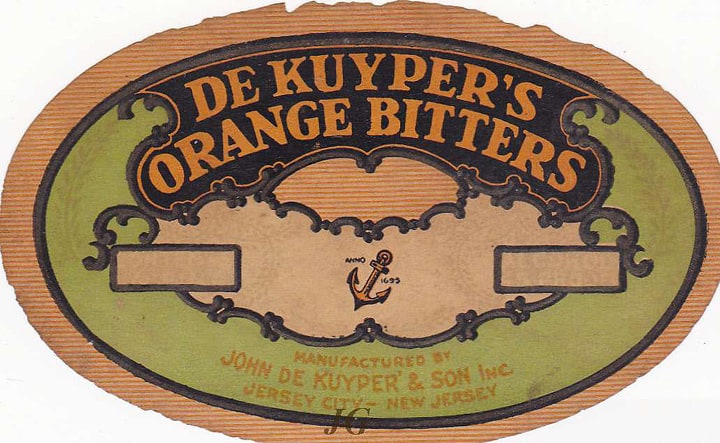 De Kuyper USA was born along with the De Kuyper’s Orange Bitters (see trade card above) made from rinds, such as lemon peels, sweet or bitter orange peels and Curaçao orange peels. To ensure that the De Kuyper brand retained a foothold in the United States, De Kuyper supplied alcohol-free gin and these orange bitters in a labeled green bottle. You can also recognize their anchor within a heart logo which is pretty darn cool. 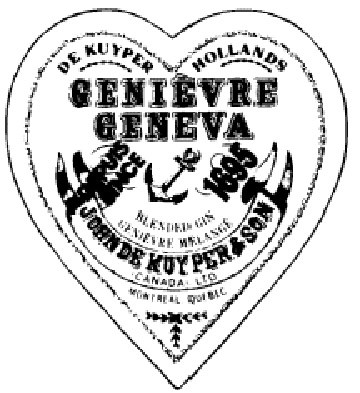 What a strong brand with a lot of history and good fortune that carries them to our store shelves today. 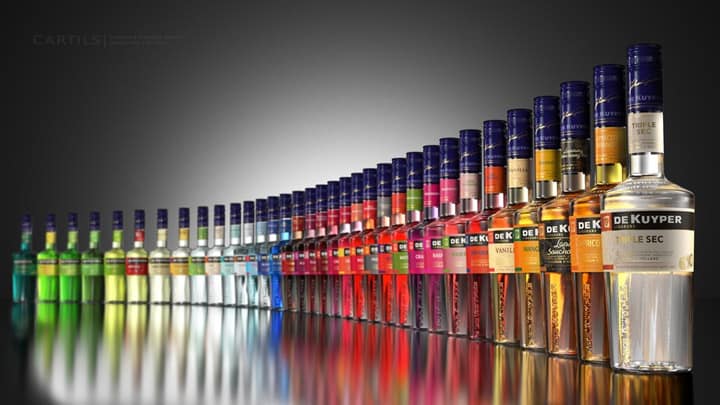 D 40 L … DeKuyper’s Orange Bitters
Manufactured by John DeKuyper & Son   Rotterdam, Holland
Sole Agents for the U.S.A.  B. B. Dorf. and Co., Inc., 247 Park Ave., New York
Green, Tooled lip
Neck label: Permission to import and sell these orange bitters has been obtained from the U.S. Bureau of Prohibition, Washington, D.C., as per their letter of 30 July, 1927
Newspaper advertisement

DeKuyper Royal Distillers is a privately held Dutch company in the business of manufacturing and marketing distilled spirits and liqueurs.

The company was begun in 1695 by Petrus De Kuyper as a manufacturer of barrels and casks used in the transportation of spirits and beer. By 1752, the family owned a distillery in Schiedam which was then the leading center for the production of Dutch gin or genever. In the 19th century, the company expanded its export business throughout Europe, Great Britain and Canada. In 1911, a new distillery was built in Schiedam and thereafter the production of liqueur began. The roster of flavors slowly expanded, and partnerships were formed with distillers in Canada (1932) and the United States (1934, strategically at the end of Prohibition). By the 1960s the production of liqueurs had overtaken the production of genever as drinks tastes changed and the promotion of liqueurs for use in cocktails induced a surge in sales.

In 1966, De Kuyper sold the right to manufacture and market their brands in the United States to Jim Beam Brands under a perpetual agreement. American consumers know the brand as John DeKuyper & Son, which makes generally inexpensive liqueurs such as Triple Sec and various flavors of Schnapps such as Pucker, generally for consumption in sweet cocktails or shots.

In 1995, on the occasion of its 300th anniversary, the company received the title “Royal” from Queen Beatrix of the Netherlands. This led to the company changing its name from Johannes de Kuyper & Zoon to De Kuyper Royal Distillers. In the same year, Erven Warnink – the leading producer of advocaat and cream liqueurs – was taken over by De Kuyper Royal Distillers. [Wikipedia]

Ferdinand Meyer V is a native of Baltimore, Maryland and has a BFA in Fine Art and Graphic Design from the Kansas City Art Institute and School of Design. Ferdinand is the founding Principal of FMG Design, a nationally recognized design consultation firm. Ferdinand is a passionate collector of American historical glass specializing in bitters bottles, color runs and related classic figural bottles. He is married to Elizabeth Jane Meyer and lives in Houston, Texas with their daughter and three wonderful grandchildren. The Meyers are also very involved in Quarter Horses, antiques and early United States postage stamps. Ferdinand is the past 6-year President of the Federation of Historical Bottle Collectors and is one of the founding members of the FOHBC Virtual Museum.
View all posts by Ferdinand Meyer V →
This entry was posted in Advertising, Bitters, Gin, History, Liqueurs, Liquor Merchant, Spirits and tagged bitters, Capone, DeKuyper, Distiller, genever, Gin, Gourd, Holland, liqueur, New Jersey, Orange, Prohibition, Rotterdam, Royal, Schiedam. Bookmark the permalink.