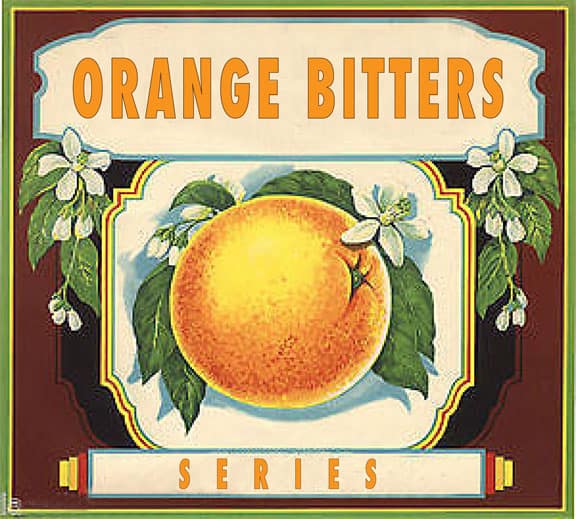 Here is another, what appears to be, unlisted “Orange” bitters from San Francisco, California. The California Aromatic Orange Bitters was put out by Irishman, John Mulhern, who had a long and storied business career. As a young man in 1880, Mulhern took his life savings of $500 and purchased the complete assets of a soda pop and soda fountain business from Martin Z. Watson. This move would shape his career.

Initially in the 1880s, Mulhern was listed as selling flavoring extracts. He does this while maintaining the Watson & Company name at 122 & 124 Market until he changes the name of the business to John Mulhern in 1898 or 1899. The word “Company’ is missing from directory listings and advertising.

From 1899, until 1902 or so, Mulhern put his knowledge with flavoring extracts and oranges to use and he produced his California Orange Bitters. I can only find advertising for these three years. He said the bitters was for “Dyspepsia, Loss of Appetite and Stomach Troubles”. At that time, there were other ‘imported’ orange bitters being sold in San Francisco by William Wolff & Co. and others, so Mulhern most likely added “California” to the name to distinguish his product.

The California Aromatic Orange Bitters was probably a labeled bitters and to my knowledge, no examples exist in collections. This bitters may have remained forgotten, and unlisted in Ring & Ham, had it not been for the submission of the advertising envelope below by bitters trade card authority Joe Gourd. 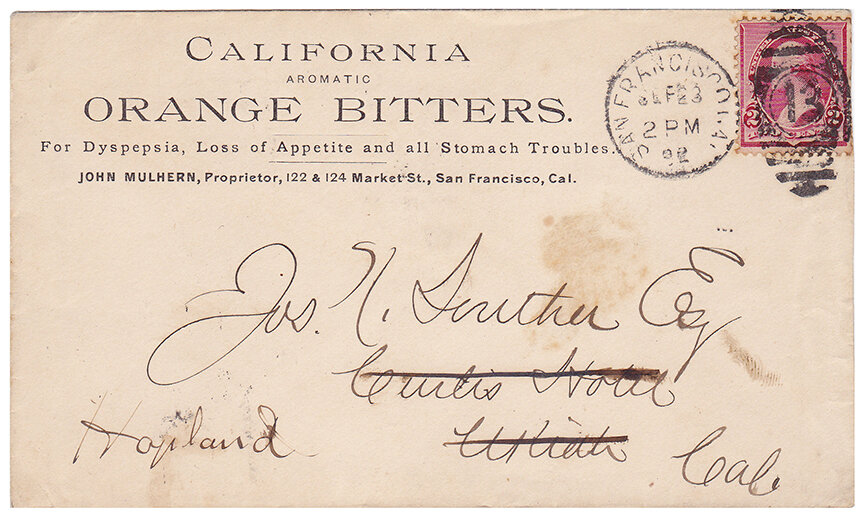 Special Note: The envelope above has a Washington 1890 issue, 2-cent, magenta stamp with a ‘football 13’ hand cancel in cork (see detail below). It looks likes the circular cancel reads, “SAN FRANCISCO, SEP 23, 2 PM 92.”. If this 1892 date is correct, this puts the bitters product much earlier from 1890 to 1902. What is odd, is that John Mulhern was using the Watson & Co. name during this period. Watson is not used on the envelope. 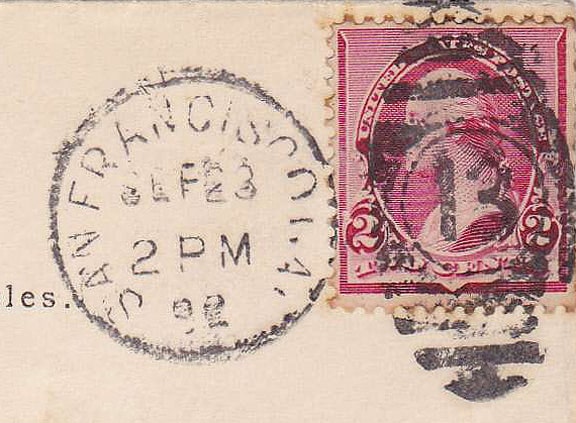 Mulhern also advertised that he was an agent for Dr. Abernathy’s Green Ginger Brandy. In those days, one of the popular hardy beverages enjoyed by all two-fisted drinkers was “Dr. Abernathy’s” and John Mulhern continued its manufacture right up until the days of prohibition. During prohibition it appeared as a medicinal beverage.

Mulhern next expands from flavoring extracts and bitters into the soda supply and machinery business in 1902 and runs this until 1925 becoming a noted and pioneer dealer and representative in this business field. You see him quoted at many product shows and within trade magazines in historical documents. Mulhern was also one of the first to introduce to California, Coca-Cola fountain syrup from Atlanta, along with Claridge flavors from Boston and a complete line of soda fountains.

What is really cool is that Mulhern had Patent No: 149,711 for the design and the words “Orange-Kist Soda” which was a non-alcolohic, malt less beverage sold as a soft drink. It looks like the flavor orange was a theme in Johns life. 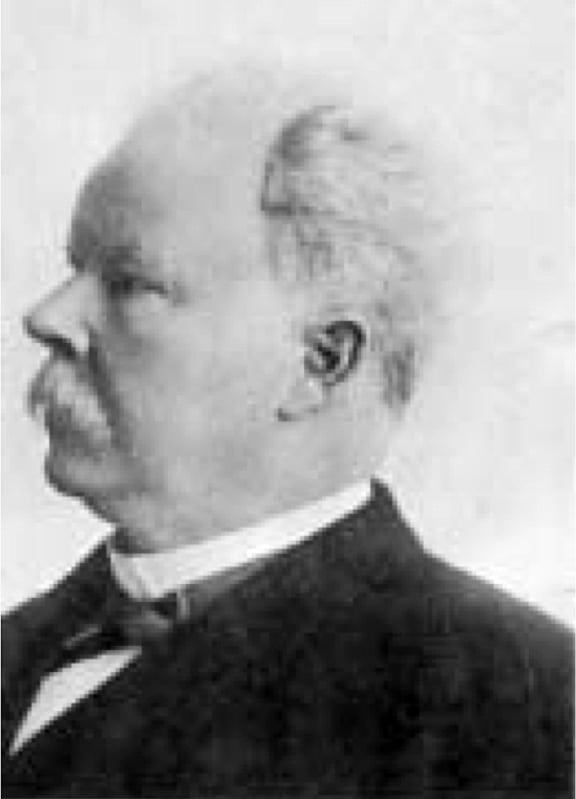 1880: A young John Mulhern took his life savings of $500 and purchased the “complete assets” of a soda pop and soda fountain business from Martin Z. Watson.

1902: Wm. Wolff & Co. , 216 Mission, agents Orange Bitters, San Francisco Blue Book * This is an import product most likely and not the same brand. 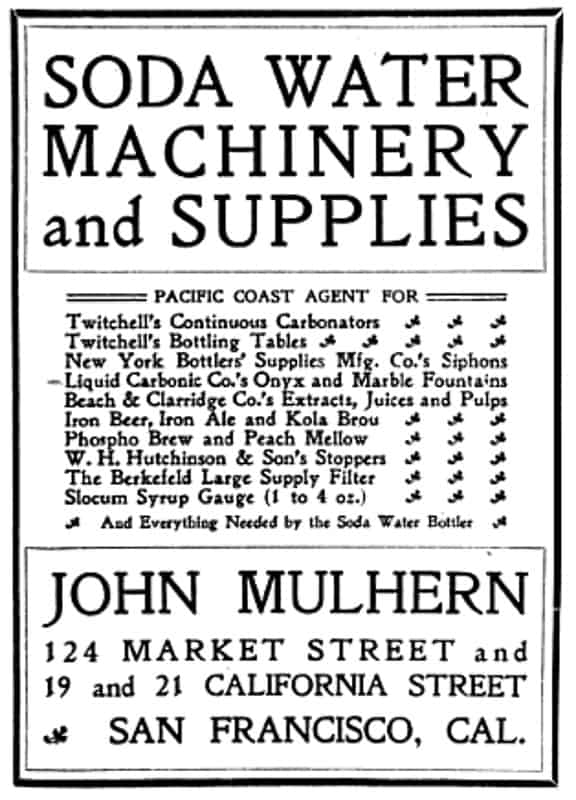 Ferdinand Meyer V is a native of Baltimore, Maryland and has a BFA in Fine Art and Graphic Design from the Kansas City Art Institute and School of Design. Ferdinand is the founding Principal of FMG Design, a nationally recognized design consultation firm. Ferdinand is a passionate collector of American historical glass specializing in bitters bottles, color runs and related classic figural bottles. He is married to Elizabeth Jane Meyer and lives in Houston, Texas with their daughter and three wonderful grandchildren. The Meyers are also very involved in Quarter Horses, antiques and early United States postage stamps. Ferdinand is the past 6-year President of the Federation of Historical Bottle Collectors and is one of the founding members of the FOHBC Virtual Museum.
View all posts by Ferdinand Meyer V →
This entry was posted in Advertising, Bitters, Ephemera, History, Medicines & Cures, Mineral Water, Postage, Questions, Soda Bottles, Soda Water, Soft Drinks, Syrup and tagged Abernathy, Aromatic, bitters, california, Coca-Cola, Irish, market, Mulhern, Orange, Orange-Kist, San Francisco, Soda, Watson. Bookmark the permalink.