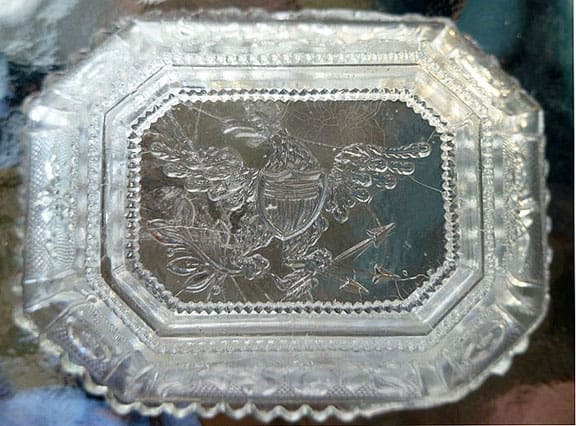 This short lived company was established in 1831 on land owned by the Dyer family of Providence, Rhode Island. On January 12th 1831, the company was incorporated by Benjamin Dyer Junior, Treasurer, John Mackie, President, Joseph Mauran, Secretary and the following directors; Charles Dyer, William Butler and Daniel Field. Later in the year, in the month of June, William Eayres was hired as the agent and practical glass man along with George B. Holmes, who was the owner of the business next door, the Phenix Iron Works. It was Holmes who would supply the glass company with their molds and glass pressing machines in the venture.

They were trying to compete with the New England Glass Company and Boston and Sandwich Glass Company for the lucrative pressed glass market in the northeastern and mid-atlantic states. Completion of the factory occurred in June of 1831. The Providence Flint Glass Company was located on Eddy Street, two blocks before it merged with Dorrance Street. The first firing of the furnace commenced in September of that year. The following advertisement ran in newspapers across the country in 1831:

Some history of William Eayres. In 1828 and 1829, Eayres lived on Broadway Street in South Boston and was the agent of the Boston Flint Glass Works. This venture did not last long and soon he traveled 50 miles south and relocated to Providence, Rhode Island, where in January 1831, he became the sole agent for the newly incorporated and short-lived Providence Flint Glass Company. He served as its agent until it shut down in 1834.

In the 1830s, some of the former Boston Glass Manufactory’s buildings and real estate in the area of South Boston near Second Street and A Street, became the home of short-lived flint glass houses. By 1834, he returned to a South Boston residence on Third Street. He is listed as a glass maker in the Boston directory of 1835. Eayres managed a flint works there in 1834 and 1835. By 1835, he is no longer found as a South Boston resident or businessman. As Eayres is not a common name, William probably was related to one; Ebenezer Eayres, who on October 22, 1788, fell from scaffolding during construction of the chimney-less factory on Essex Street. 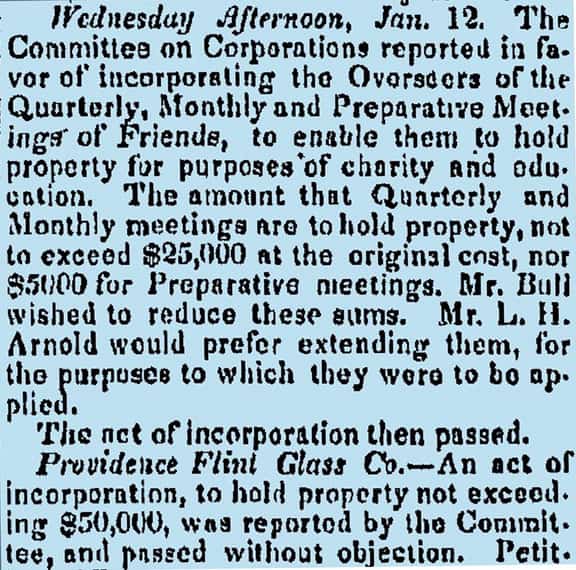 A few days later, on Friday, February 4, 1831 in the Rhode-Island American (Providence, RI) newspaper, the following legal announcement was placed by the company: 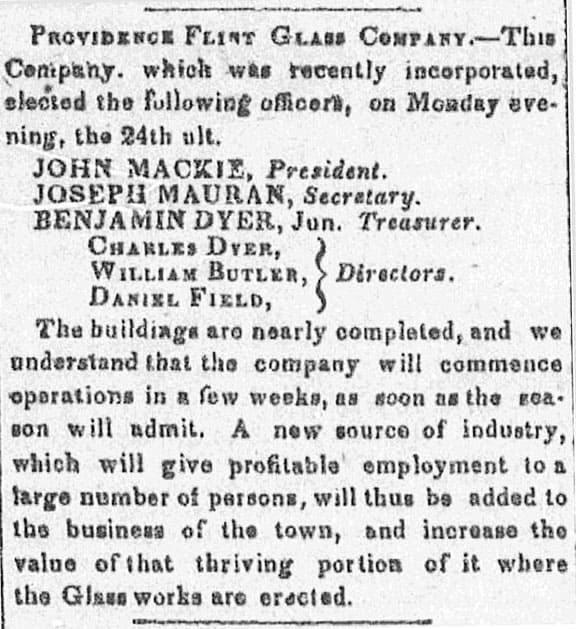 Below is a map from 1835 showing the location of the factory in South Providence.

1835 map of the city of Providence, Rhode Island. The Providence Flint Glass Company was located between Eddy and Dorrance Streets – Map from the Library of Congress

In June, a second legal notice was placed in the Tuesday, June 7th, 1831 Rhode-Island American (Providence, RI). The newspaper again listing the board members and officers. The board went through some changes as newly elected directors were now in charge of the operations and they chose William Eayres, spelled incorrectly as Eyres, in the advertisement as the new agent. Additionally, we now see George B. Holmes appearing as a director. This is critical as he was one of the the owners of the Phenix Iron Foundry located a short distance away on Eddy Street. A little history regarding the iron works:

These extensive works were first started April 1, 1830, and were chartered as the Phenix (not Phoenix) Iron Foundry, June, 1832. The company is engaged in the manufacture of hydraulic presses, dyers, printers, and bleachers’ machinery, castings, shaftings, &c. The company has constantly extended their business since its first inception to the present. The extensive buildings are of stone and brick, and located at the corner of Elm and Eddy streets. They employ some one hundred and seventy-five men, and, notwithstanding the depression of the times, are doing a large and profitable business. Officers, James S. Anthony, President; George B. Holmes, Treasurer. 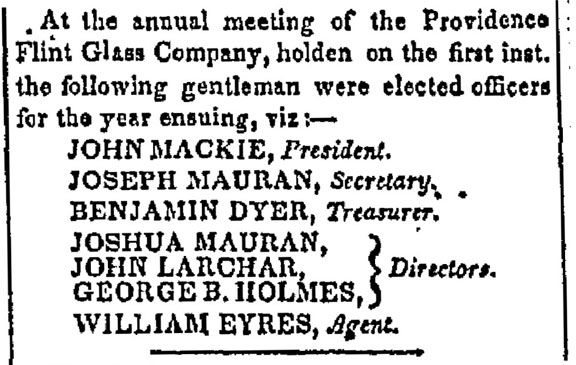 With the new board in place, glass blowing began in May of 1831. Mosses Potter was the store front in Providence selling the factory’s products. Potter placed an advertisement stating production had begun:

Later in November of 1831, investors were being sought for the company as they were trying to enlarge the factory with a second furnace. The funds were raised and the second furnace was completed early in 1832. Here is a short advertisement placed in the Rhode-Island American (Providence, RI) newspaper on Tuesday, November 1st.

The Providence Flint Glass factory was quite successful at first and a second furnace and pressing machine were added in 1832. The company began to make Lacy type plates, bowls and salts. The company’s output was quite different comparatively to the other companies that were also pressing glass. Stiff competition from the North, from the very large Sandwich and New England Glass Companies, hindered sales by the new firm and by the end of 1834 the factory was closed.

Below are two salts in my collection that are attributed to the factory. Assigning possible dates of manufacture is easy as they were either made in 1832, 1833 or 1834. Items attributed to these glass works are rare because of the small size of the factory. One aspect of the glass which is different from Sandwich, the New England Glass Company and all of the Pittsburgh glass is that it has a very pale grayish tone to it suggesting their very own batch recipe.

The first piece is an octagonal shaped salt dish charted by Eagle Neal as the EE-5 and is listed as Rare. 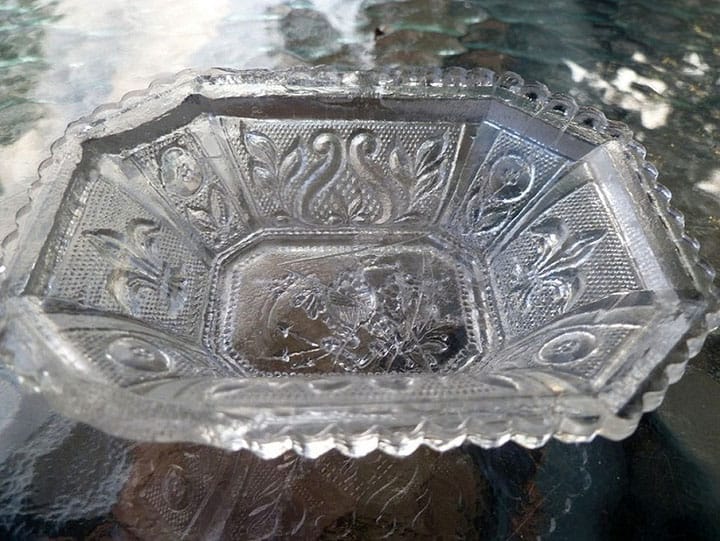 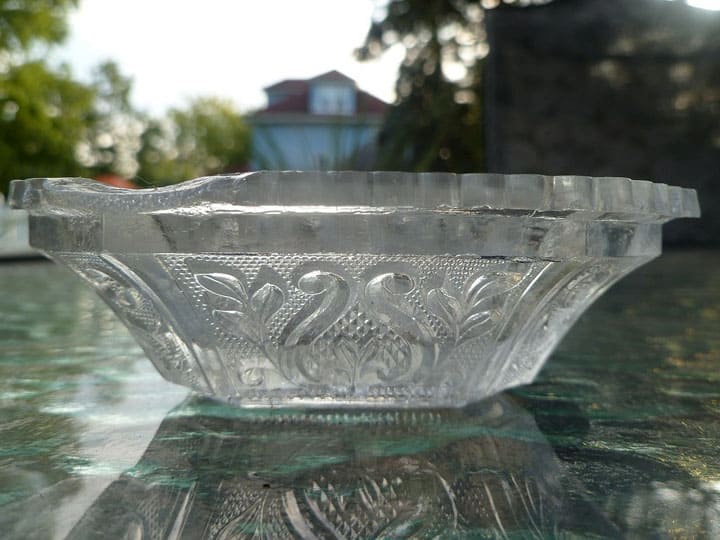 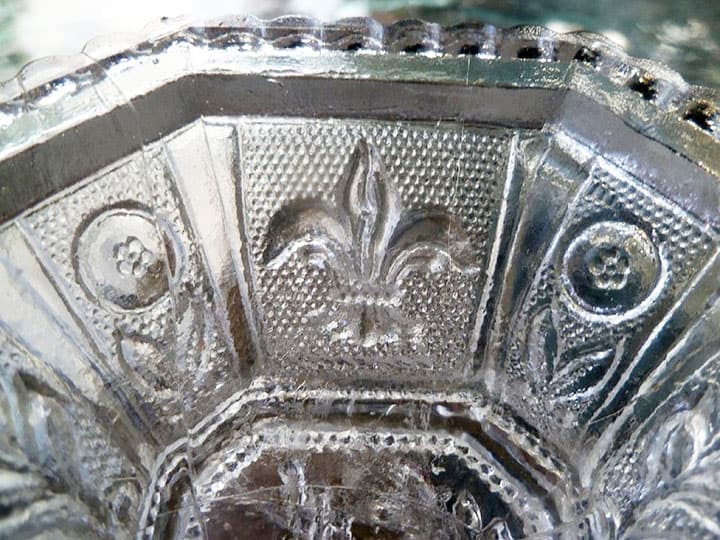 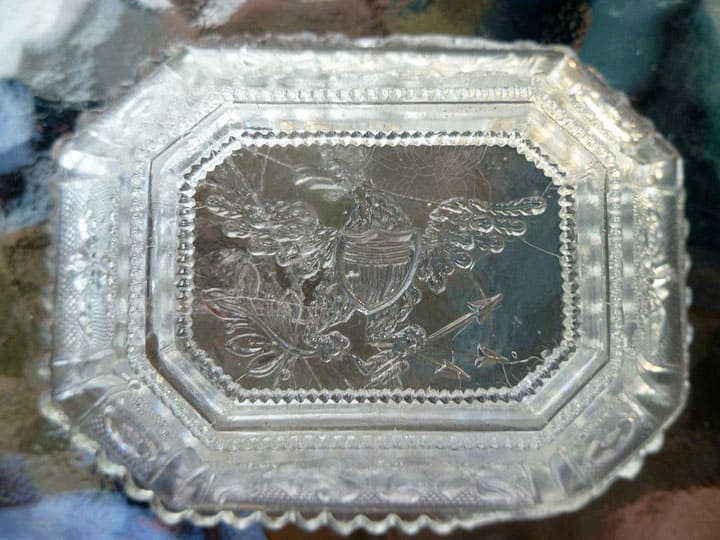 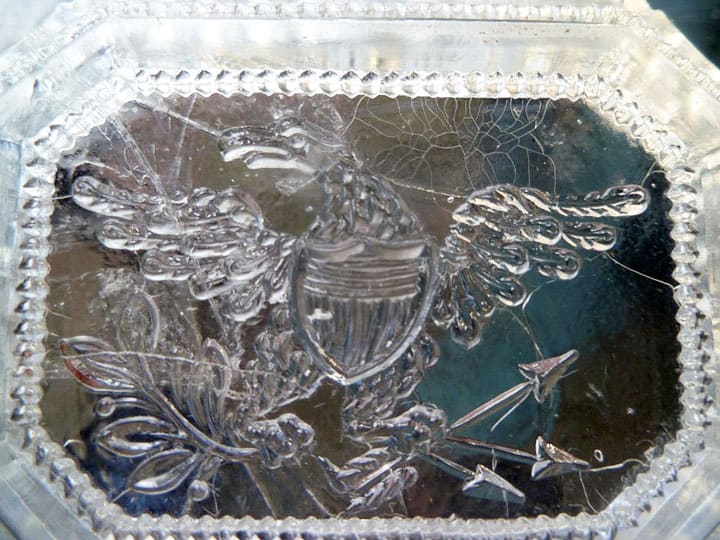 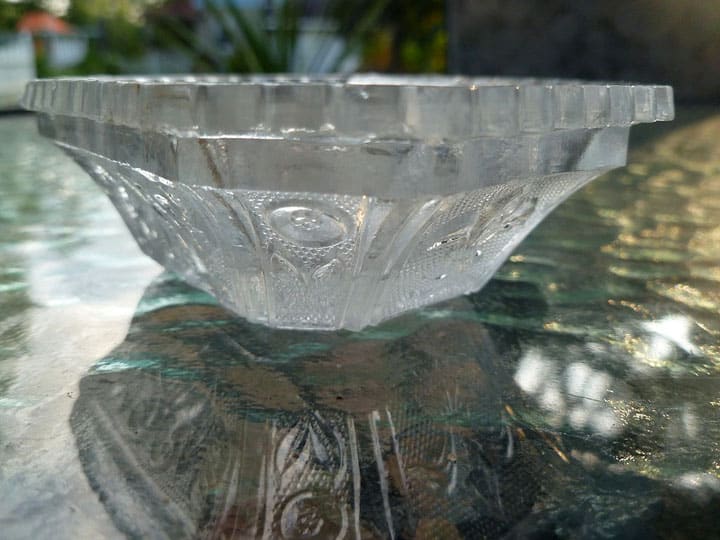 An advertisement placed in the Manufacturers and Farmers Journal and Pawtucket Advertiser newspaper, page 3, April 20th, 1835 make a reference to the factory but does not state it is still in business. Martin Stoddard & Co. was an auctioneer and did quite a lot of business for the glass factory when in operation and after. 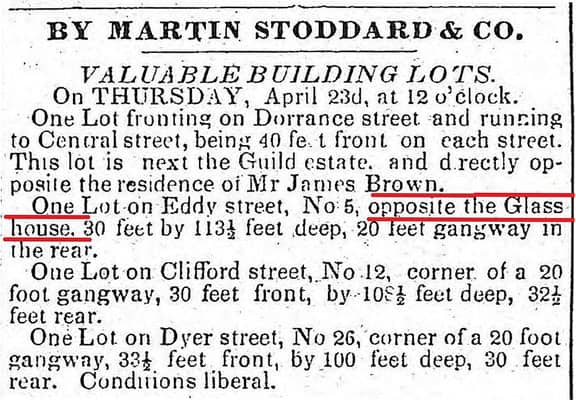 In the same newspaper and also appearing on page 3, it appears that part of the factory’s buildings and lot are about to be sold suggesting the factory is no longer in business. 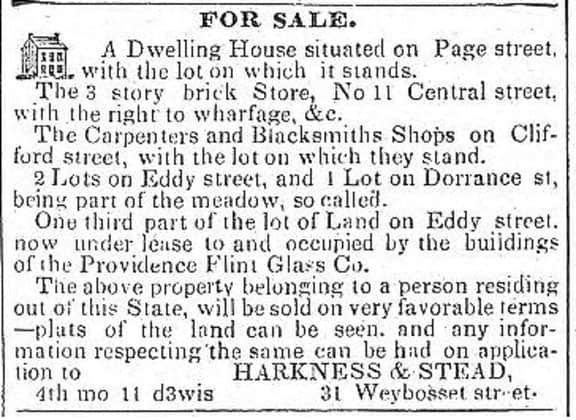 Another rare salt in my collection made at the Providence Flint Glass Company is the Neal Charted SC-7 in clear flint glass, listed as Scarce. 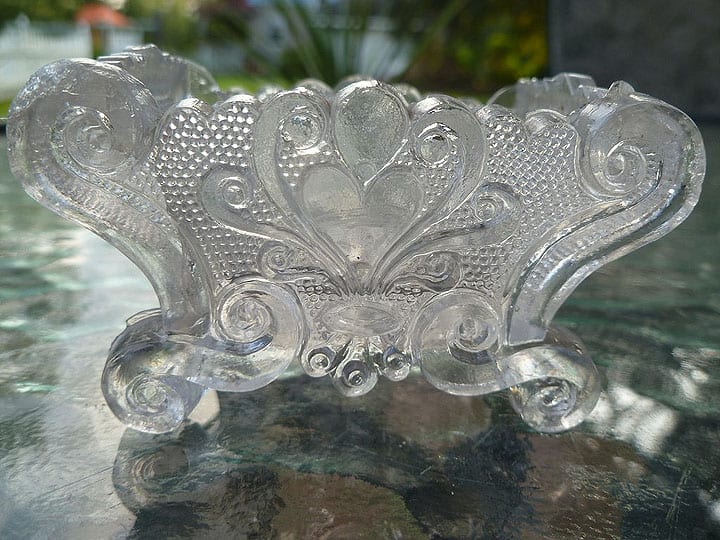 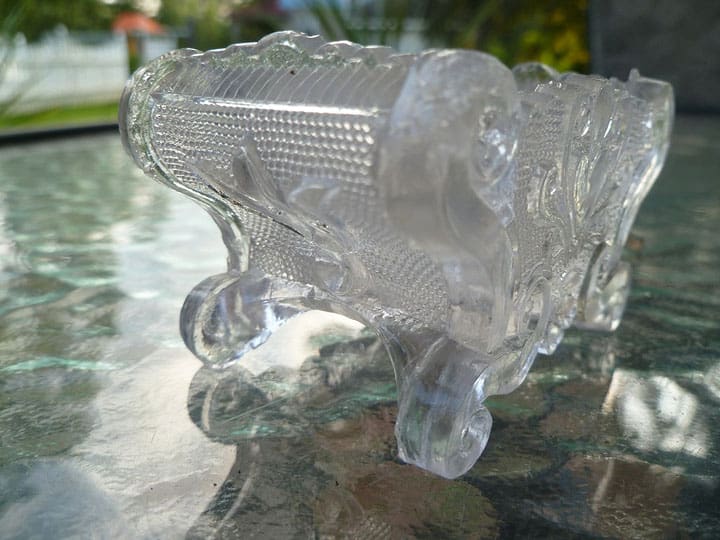 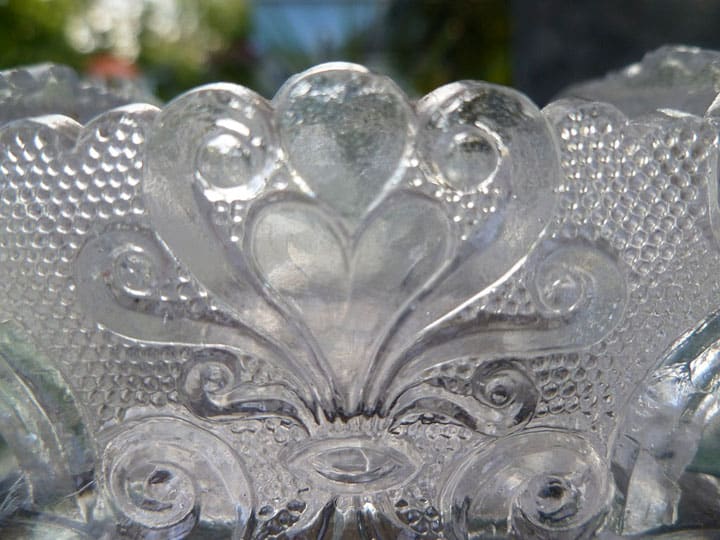 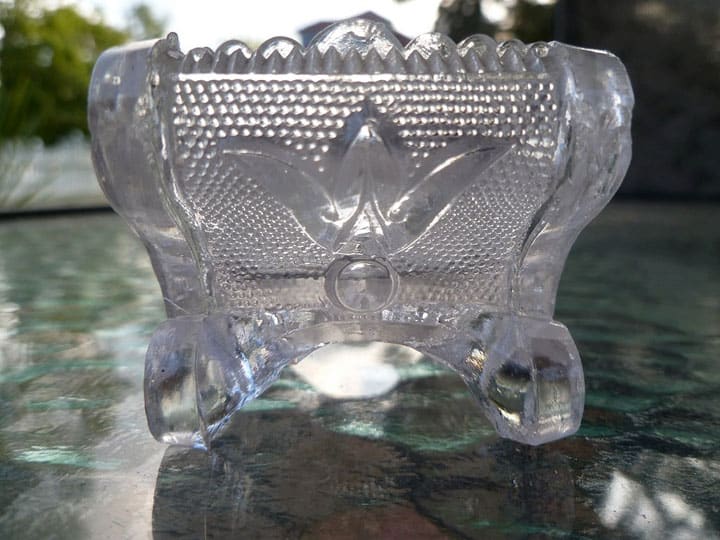 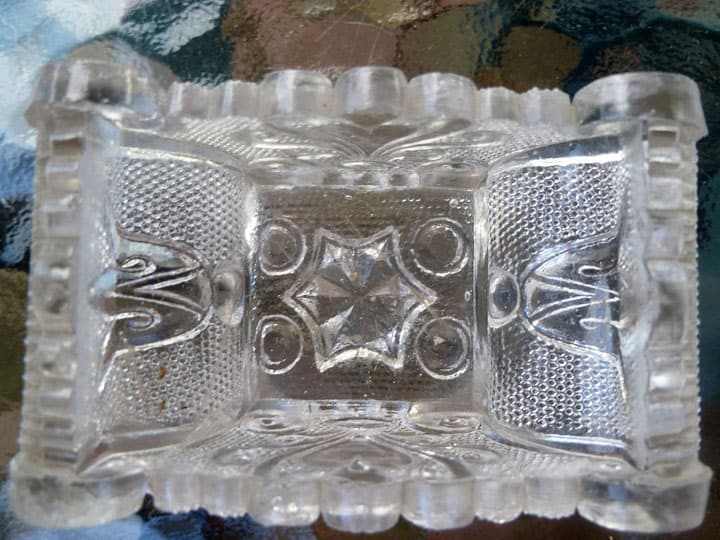 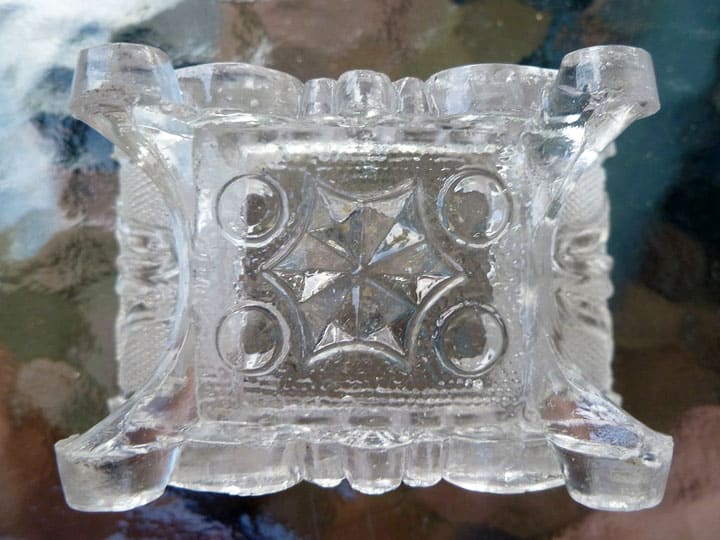 All of the men connected to this venture were of great business persuasion and worked closely with and in some cases were directly involved in the State affairs of Rhode Island. Like all glass factories of the 19th Century, it was a difficult task at best to keep them operational and solvent. Most factories had many different owners in short time spans suggesting just how fine a line it was to successfully operate one. The end of the Providence factory was due to the financial troubles which had began in 1833 lasting right up to the financial panic of 1837. I am sure they still made their fair share of Flint glass tableware and it is highly collectable today.

Ferdinand Meyer V is a native of Baltimore, Maryland and has a BFA in Fine Art and Graphic Design from the Kansas City Art Institute and School of Design. Ferdinand is the founding Principal of FMG Design, a nationally recognized design consultation firm. Ferdinand is a passionate collector of American historical glass specializing in bitters bottles, color runs and related classic figural bottles. He is married to Elizabeth Jane Meyer and lives in Houston, Texas with their daughter and three wonderful grandchildren. The Meyers are also very involved in Quarter Horses, antiques and early United States postage stamps. Ferdinand is the past 6-year President of the Federation of Historical Bottle Collectors and is one of the founding members of the FOHBC Virtual Museum.
View all posts by Ferdinand Meyer V →
This entry was posted in Article Publications, Bowls, Dinnerware, Early American Glass, Glass Companies & Works, Glass Makers, History, Pressed Glass, Salt and tagged Dyer, Eayres, Flint, Holmes, Mackie, Mauran, Phenix, Potter, Providence, Rhode Island, Stoddard. Bookmark the permalink.