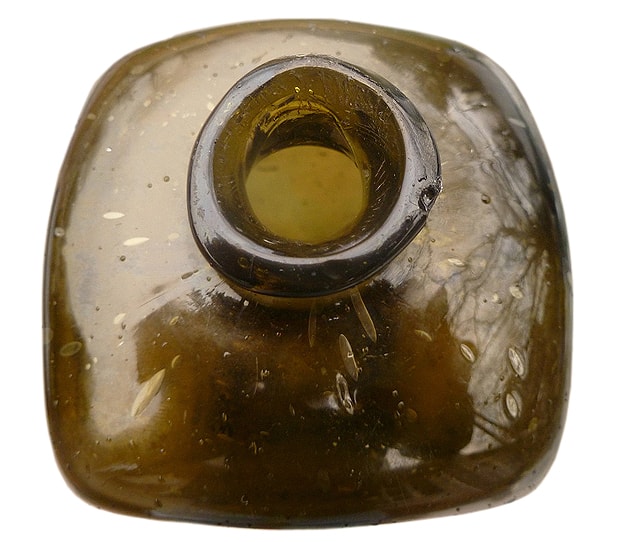 Part 1 of a Series

The manufacture of glass was commenced in the village of New Windsor near present day Newburgh, 66 miles north of New York City, sometime mid to late 1751 by a company from New York City of which Christian Hertell, Samuel Bayard, Lodewyck (or Lodewick) Bamper and Mathias (or Matthew) Ernest were partners, the first named being the resident manager. This group hired master gaffer, Johann Martin Greiner of Saxe-Weimar in the Palatinate region of present day Germany to design, help construct the glass works, be the master gaffer and train the new help.

Mr. Grenier was part of the famous (French-German) glass blowing, factory owning Greiner family who had been manufacturing glass from the early 1500s. These wealthy Dutch gentleman were partners of a company named the Glass House Company and were based out of New York City. The following agreement recites the purchase of lots for the purpose and other matters connected with it:

Memorandum that we, the subscribers, have this third day of January, 1751, agreed with Vincent Matthews, who acts in behalf of Samuel Bayard, in New York, for a parcel of lots lying and being at New Windsor, being part of the lands we purchased from John Alsop at New York, in the following manor, that is to say: We, the said subscribers, do agree to sell the following lots with, the prices there unto annexed, viz:

“In witness whereof, we have hereunto set our hands the day and year first above written. Signed in the presence of us, Fletcher Matthews, Thos. Jones.”

“Be it remembered. That I, Christian Hertell, in company with the within Samuel Barard, Lodewick Bamper, and Mathias Ernest, did agree to the written purchase made by Vincent Mathews, with the within Proprietors of New Windsor; and do agree for myself and the rest of the company to fulfill the said agreement; and if we fail of building the said glass-house and quit it, then and in such case to release all the said lots back again to the owners thereof upon their returning the purchase money back to me and Company again, or to any of us, as witness my hand this first day of April, 1752. “C. R. HERTELL & COMPANY.

“Signed and acknowledged and delivered in presence of us, Ebenezer Seely, Jr., Judah Harlow.”

The works were conducted for a number of years until after the war of the American Revolution. Based on the archaeological finds of mainly dark green glass at the original factory site, the types of bottles and glassware made at these works are as follows:

Case bottles, the tall square in shape type with high kick-ups in the corners to help stabilize contact on all four corners.

Large wine bottles with string lips made closely in the style of the German mallet type bottles.

Large utility bottles in one, two and three gallon sizes all with deep conical bases.

The Glassworks at Munzthal in the year 1585

Henry Heigel writes in his article the German Ballai (1600-1633) that Martin Greiner and Simon Stenger had moved the glass works from Holbach to Munzthal in 1585. In 1601 the glass-master Martin Greiner, paid 80 floren for his glas-haus and eight partners, (Siegwalt Steffel, Hensel Schurer, Ulrich Scheidhauer, Hans Shirer von Petersback, Hans Greiner, Paulus Glaser, Andres Spessart, and Henre Wincker). In 1603 there were ten glass makers at the factory as output had increased.

In the year 1609 there were fourteen glass-makers; Martin Greiner, Jean Houber, Adam and Gaspard Greiner, Nicholas Krebs, George Hoff and Sebastian Ehrlich. The widow of Martin Greiner was allowed to open up one of the huts in a different location.

The old widow Greiner, planned to give up the lease for the hut because of lack of wood. There were still eleven workers employed in 1629 including Koch, Steffel, Contz, Andres, Stenger, Sigeart, Adam Greiner, Jean Schwan.

As you can see, it is obvious why the Glass House Company sought the expert advice from Johan Martin Greiner, one of the most famous glass makers from Germany at the time. The Greiner family had been manufacturing glass in Germany for 150 years prior to his arrival in New York City in 1750. Johan would go on to be hired by Wilhem Henry Stiegel who used Johan Martin Greiner to design all three of his glass works built over a ten year period at Elizabeth and Manheim, Pennsylvania.

The glass works was still in operation at New Windsor for as the advertisement below from December 28th, 1758 edition of the New York Mercury states:

Or the property being sold near the glass works mentioned in this advertisement from the April 2nd 1759 edition of the New York Mercury:

Notice of property being sold near the glass works – April 2, 1759, New York Mercury

But the end of the glass works was soon to be, for a little over a month later, as listed here in the advertisement below, which was mixed into a long list of regional stories, “The Glass House at New-Windsor, in this Province, was burnt to the ground.” – The Monday, May 28, 1759 edition of the New York Mercury. 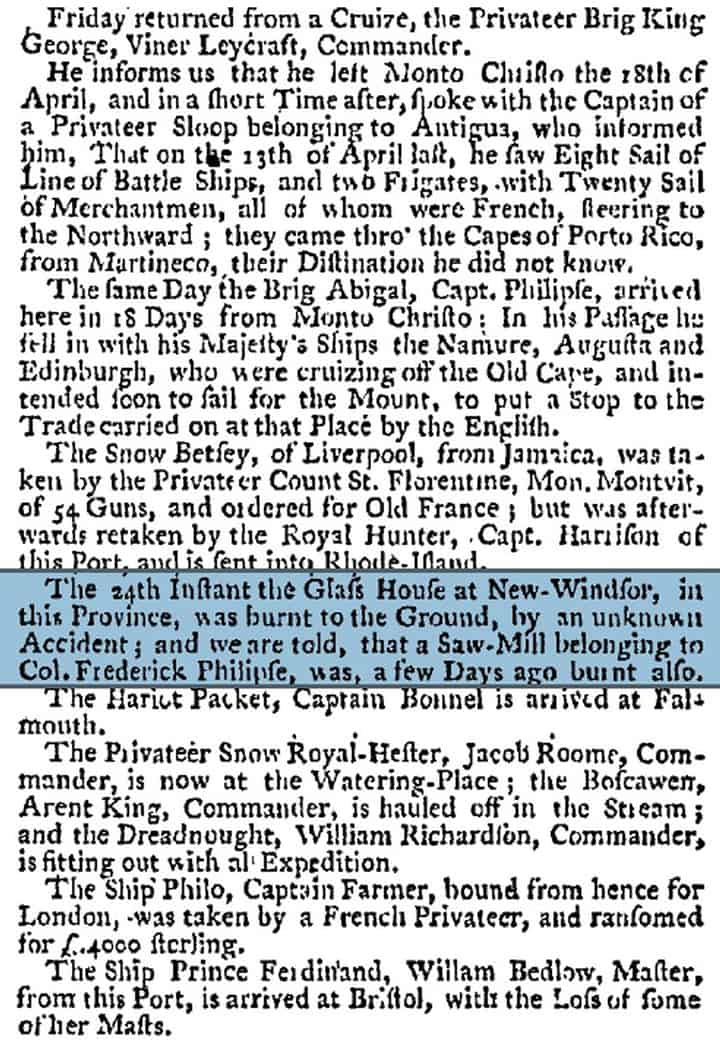 The glass house demise was mainly due to the disasterous fire and as is the case with most other glass factories, which had been established before and after the forest being depleted, this was another main factor in a glass factorys inability to survive. The North River, as it was known in Colonial times, now the Hudson river, was an excellent means of navigation to and from the city of New York. Plans were already in the works before the fire to build a new factory much closer to Manhattan (New Amsterdam) (New York) by this same group of men.

The bottle below is very typical of the type manufactured at these works: 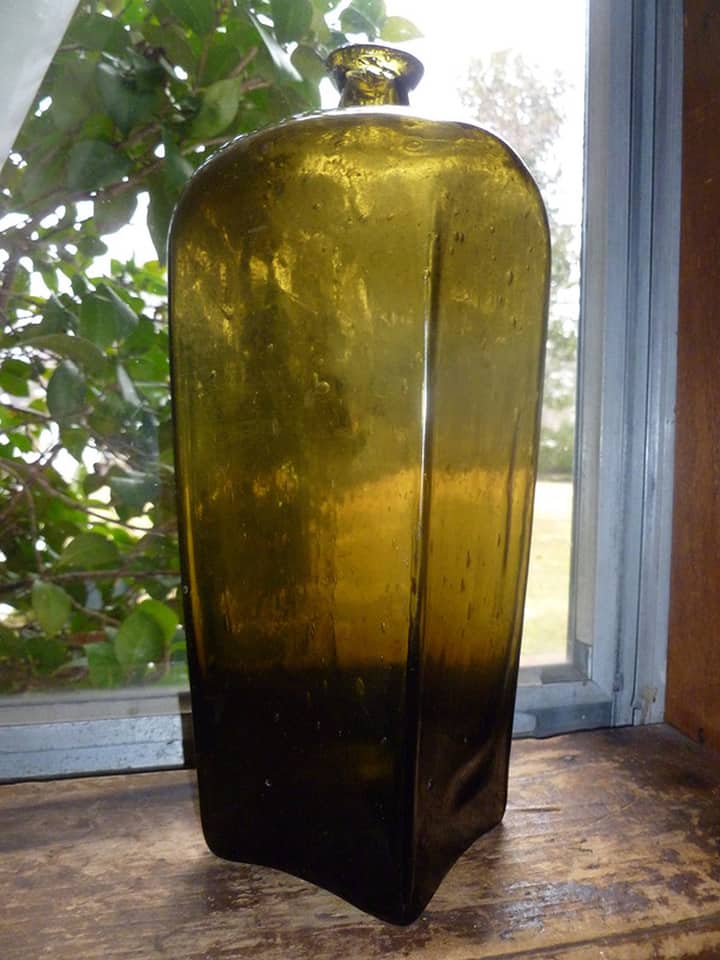 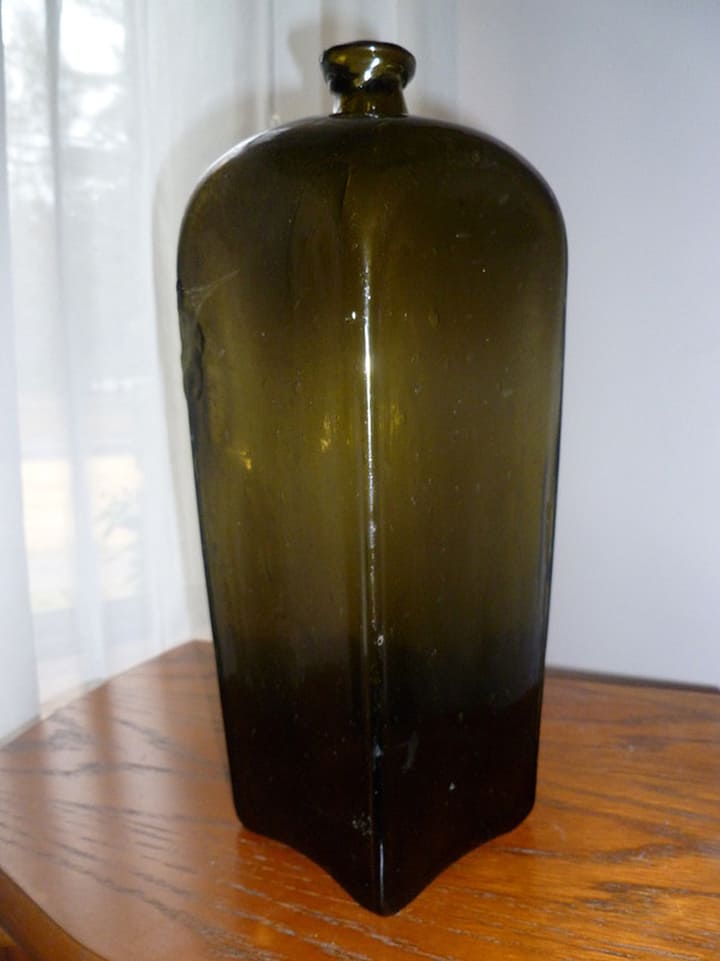 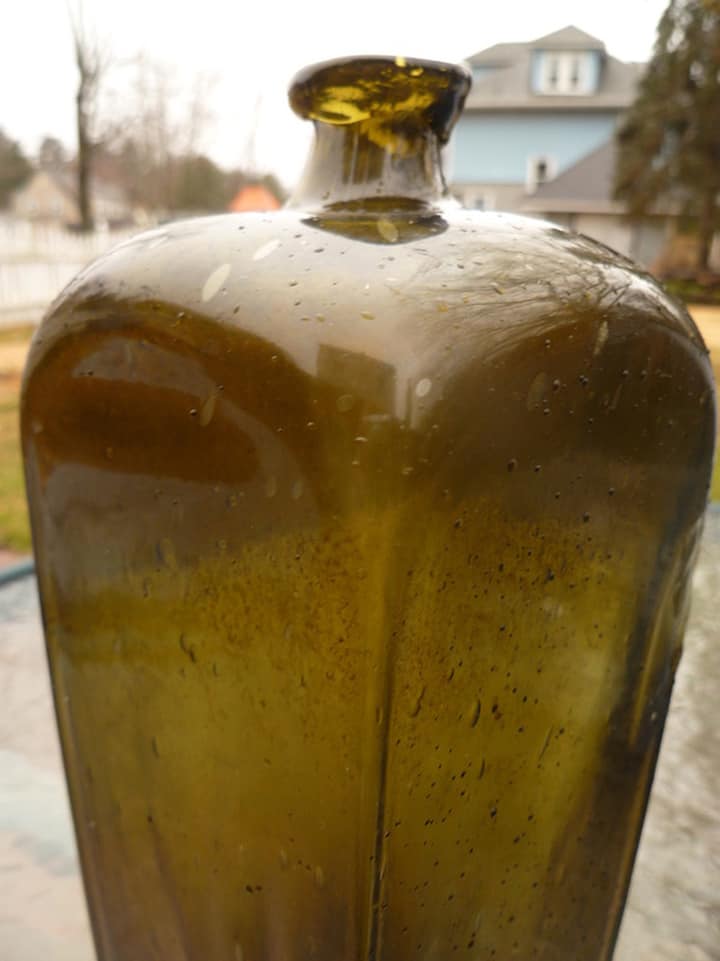 Case type bottle, in close on the shoulders and the lip. Pretty colored bottle with lots of small bubbles. 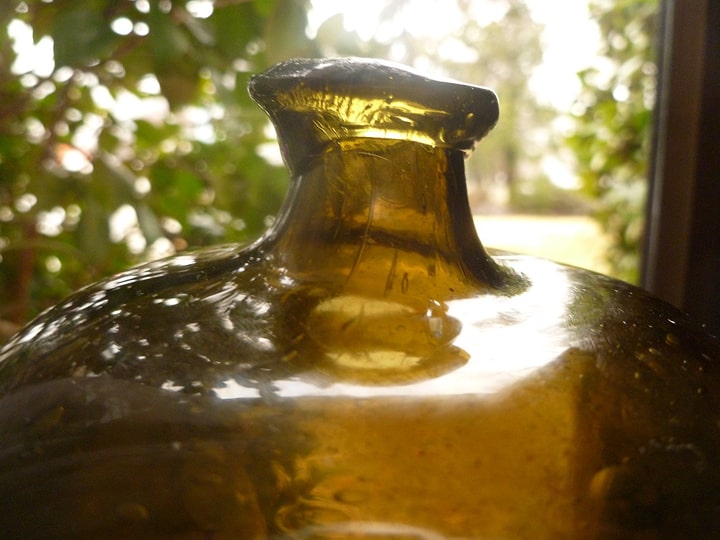 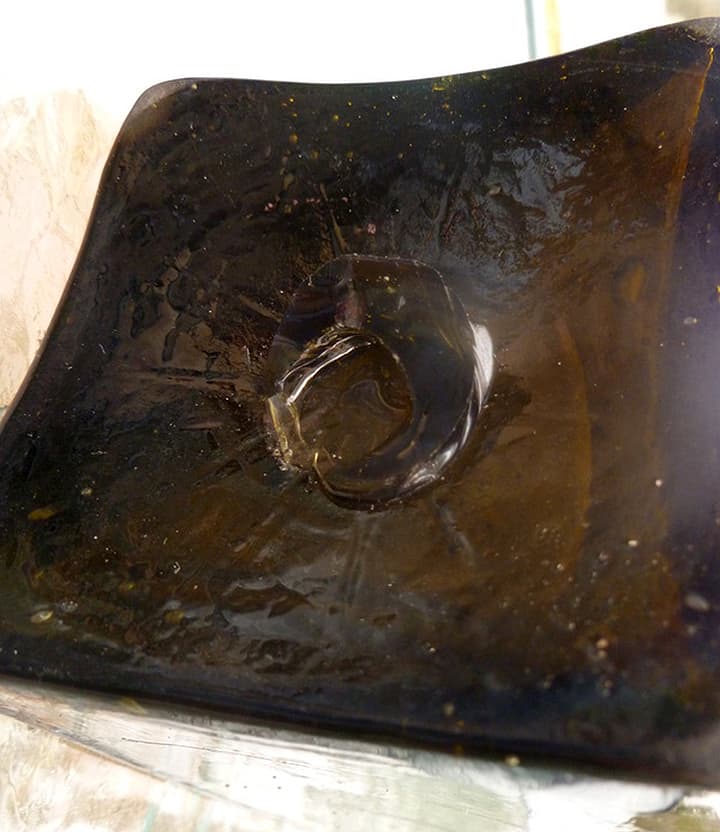 Case type bottle, concave base, deep blow pipe pontil mark with a large chunk of glass extending downward from the perimeter of the pontil mark. 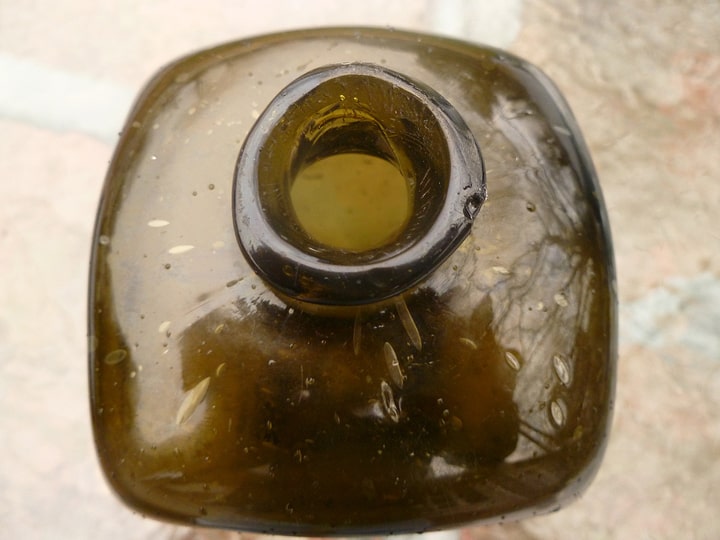 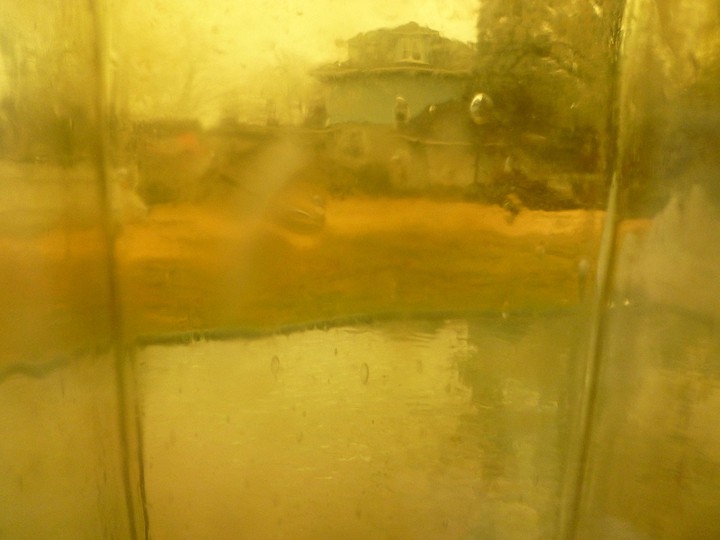 Case type bottle. Looking through 275 year old sun glasses into my back yard at the neighbors huge Victorian home! 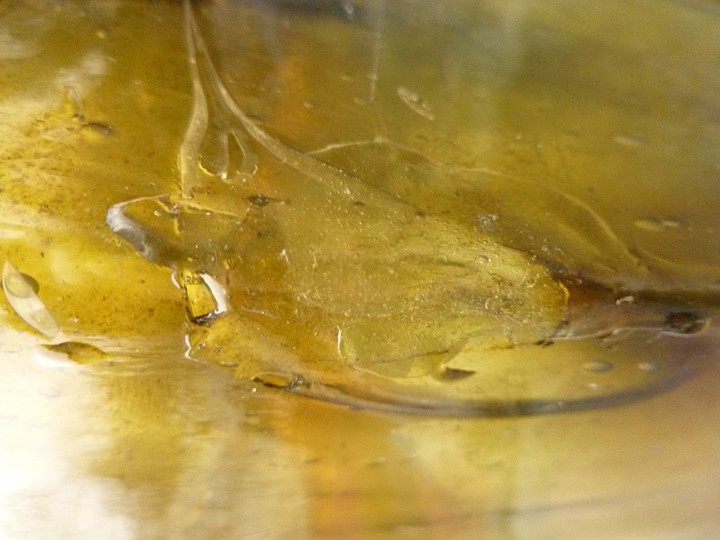 Case type bottle, On the side of the bottle, the shoulder line is a huge bubble which burst and resealed itself in the making. I have never seen this before on glass.

The January 5th, 1969 edition of The Evening News Newspaper of Newburgh, New York had the following headline: 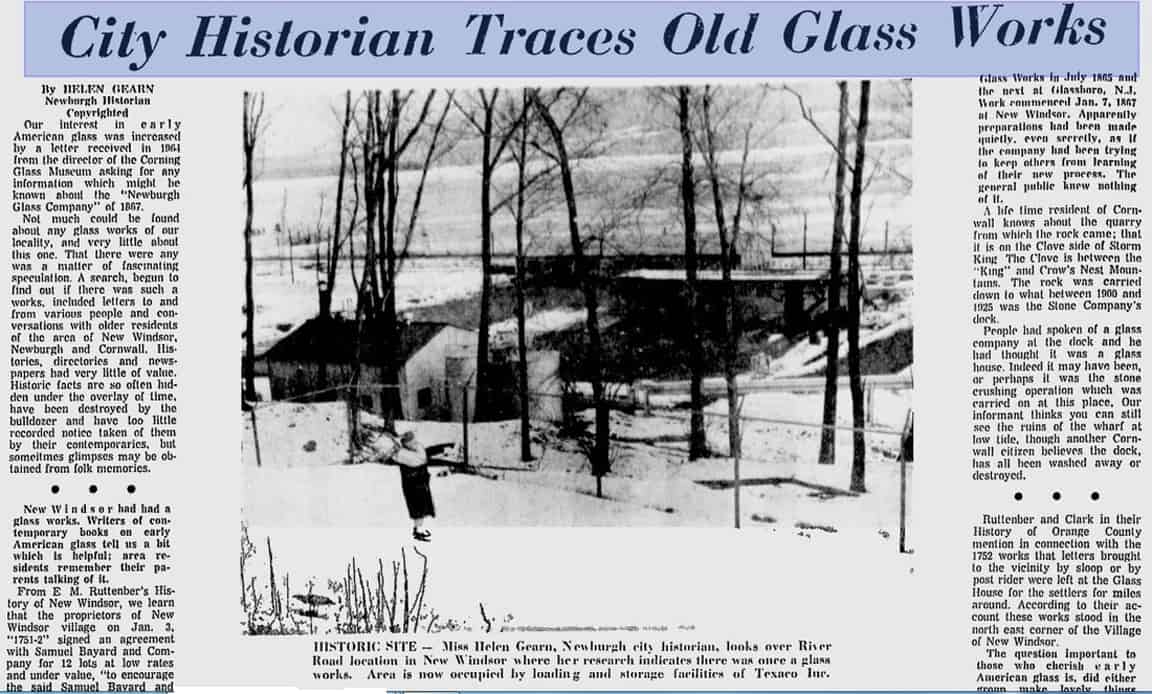