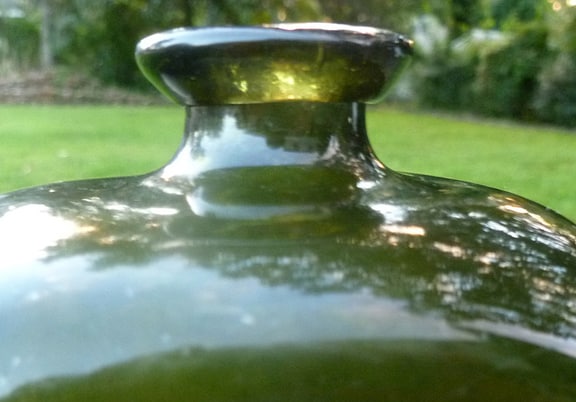 Preface of a Series | New Amsterdam

Below is a 1640 map of New York City, known then as New Amsterdam. As you can see, the area was quite developed in 1640 and Glass Makers Street is marked in yellow the Canal Street in Blue.

makes a strong case for quite a bit of glass manufacture occurring on Glass Makers Street which proves beyond a doubt that dark green drinking vessels were being blown here in 1640.

The Canal made it quite easy and safe to load and unload products from ships. Tall arched bridges cross the Canal allowing ships easy passage beneath. One other neat feature is the wall that was built around the entire city for protection mainly from Native Americans but also from invading countries from Europe.

Glass Makers Street was in the heart of the manufacturing district and judging from this map, looked quite developed and very busy. To see New York City this developed in 1640 is amazing and something I can not recall that I learned about in school. This makes a strong case for quite a bit of glass manufacture occurring on this street which proves beyond a doubt that dark green drinking vessels were being blown here in 1640. 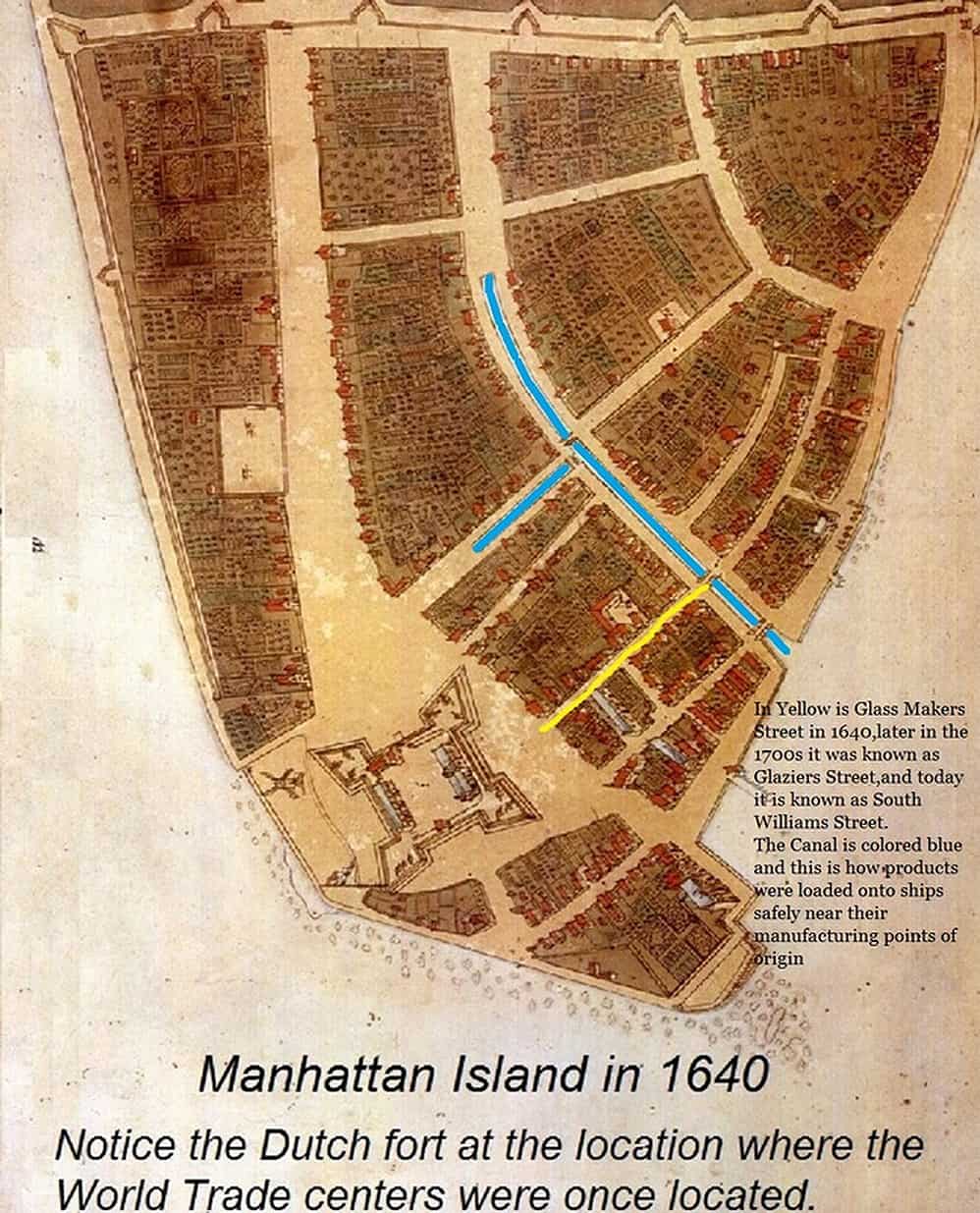 New Amsterdam was the first successful area in North America to manufacture glass continuously in the 17th century.

Evert Duycking came to America in 1638. By 1640 he had constructed his first glass house and manufactured mainly window glass. He soon realized the need for utilitarian glass but there were no master gaffers in the colony of New Amsterdam at the time. Soon master gaffers were being lured from Germany to come to New Amsterdam to blow glass. Evert who was a leading citizen in his day, was a general artisan who was succeeded in 1674 by one of his assistants, Jacob Melyer. His family was said to have made glass “unto the third and fourth generation.” Cornelis Dirkson, and members of the Jansen family, and other Dutch artisans also practised the art of glass-blowing in New York during the late 1600s.

His glass works made bulls-eyes, for the windows and doors of the early homes, and plain utilitarian bottles and all the hollow ware for the citizenry of New Amsterdam.

At the same time, Johannes Smedes who had been here quite a while, was allotted an area of land on which he erected a glassworks in 1654. The bordering path soon became known as Glass-makers Street. Smedes also had a neighbor, Jacob Melyer (mentioned above). After a few years in America, Johannes simplified his name, becoming Jan Smedes. He retired from the glass business in the same year that Peter Stuyvesant “retired” from the Governorship in 1670. His glass works made bulls-eyes, for the windows and doors of the early homes, and plain utilitarian bottles and all the hollow ware for the citizenry of New Amsterdam.

With the influx of German refugees from the Palitinate region in Germany, it wasn’t long before new glass houses would be established at present day Brooklyn, mid-town Manhattan, and Newburgh, New York. All of these were the direct result of the Glass House Company formed in 1750 by Lodewick Bamper, Samuel Bayard, Matthew Earnest, Christian Hertell, and a master gaffer, named Johann Martin Greiner from the Saxe-Weimar Palatinate region of present day Germany. Greiner, who also a few years later would be hired by Wilhelm Henry Stiegel in 1767, entered into partnership and organized the Glass House Company of New York.

This location was then known as New Found Land, where a stage coach road with a tavern had been established in the late 1600s when New York was under Dutch rule.

With financial backing from the Dutch West Indies Company, they constructed their first glass factory at the present day site on the Hudson River in Newburgh, New York, 12 miles north of Manhattan on January 3rd, 1751. The second factory was established near Lodewick Bampers home in Brooklyn in 1754 and the last factory was built in December 1758, in what is now present day, mid-town Manhattan near a location which would now be located between 34th and 40th Streets, and 8th and 11th Avenues. This location was then known as New Found Land, where a stage coach road with a tavern had been established in the late 1600s when New York was under Dutch rule.

As a resident of southern New Jersey and an amateur glass historian at best, I have always been quite proud to have known that the first successful glass works in the colonies, The United Glass Company, was located just 15 miles from my home at Alloway, New Jersey, Salem County in 1738. Was it the first? Evidence seems to prove otherwise quite clearly. It now is quite evident to me that the English, when they ruled the Colonies in the late 1600s on and up to the American revolution, may have conveniently forgotten about the history above when assembling the records of the glass industry in the now United States.

As students of the early glass manufactured here in the United States, it is time to give due diligence to the Dutch as the first at glass manufacture on a grand scale in North America. Secondly we need to rethink that all the black glass bottles which turn up in large numbers were only produced in Europe in the glass centers of England, France and The Netherlands when in fact they were produced right here at home in New York City beginning as early as 1640. The sealed, dark glass wine bottles in the Van Cortland Museum from Mr. Bamper were most definitely produced here for the prominent citizenry of the colonies from Boston to New York to Philadelphia.

Was New Amsterdam first? Or as I am finding out now, by bits and pieces, a glass factory may have been erected by the Swedes and Finns in present day Wilmington, Delaware in 1638. It lasted for six years. If this account is true, then this attempt would have been two years prior to the Dutch at New Amsterdam. Stay tuned!

Mallet type bottle has a sheared lip, unseen on this type of large vessel. 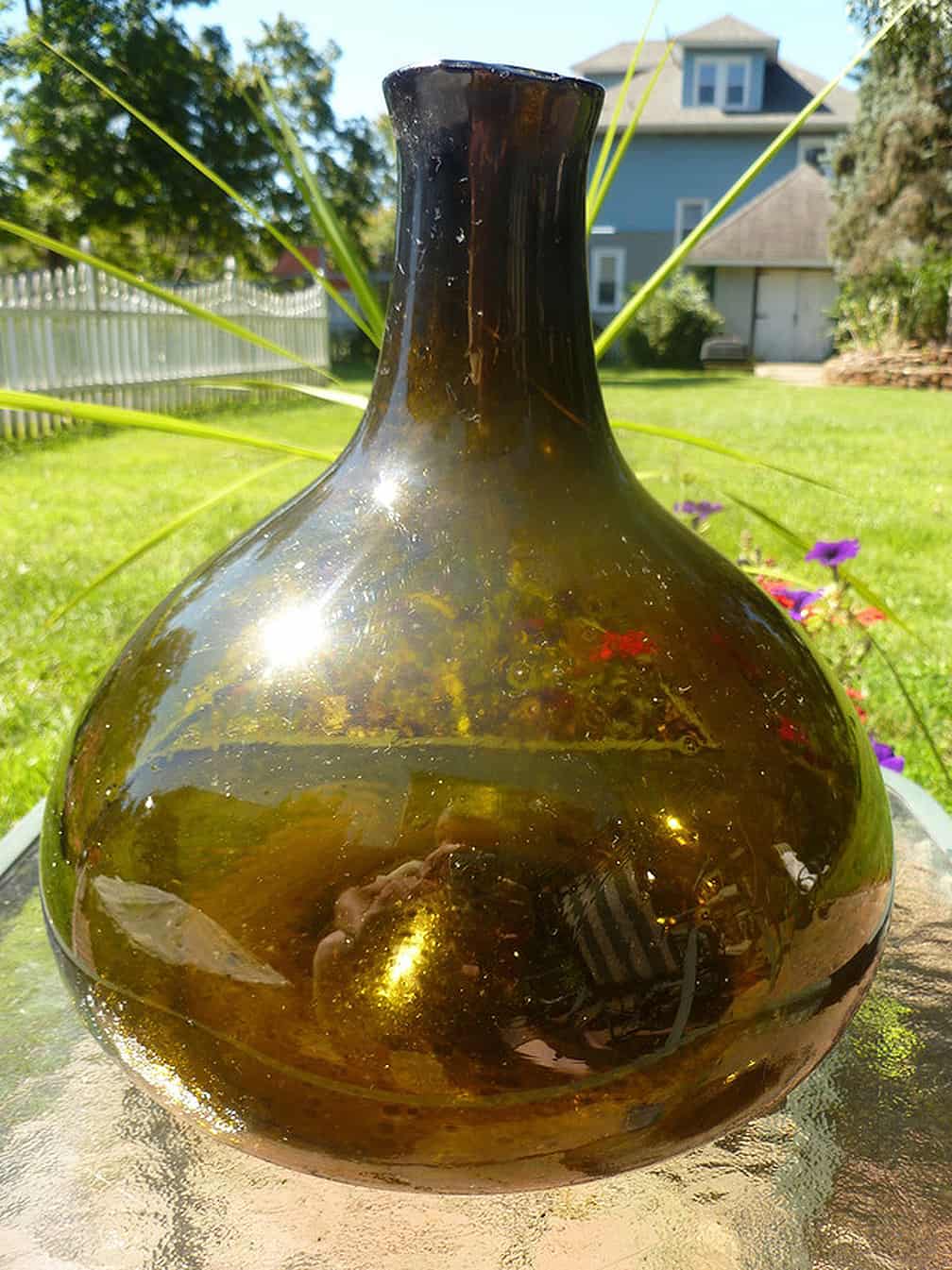 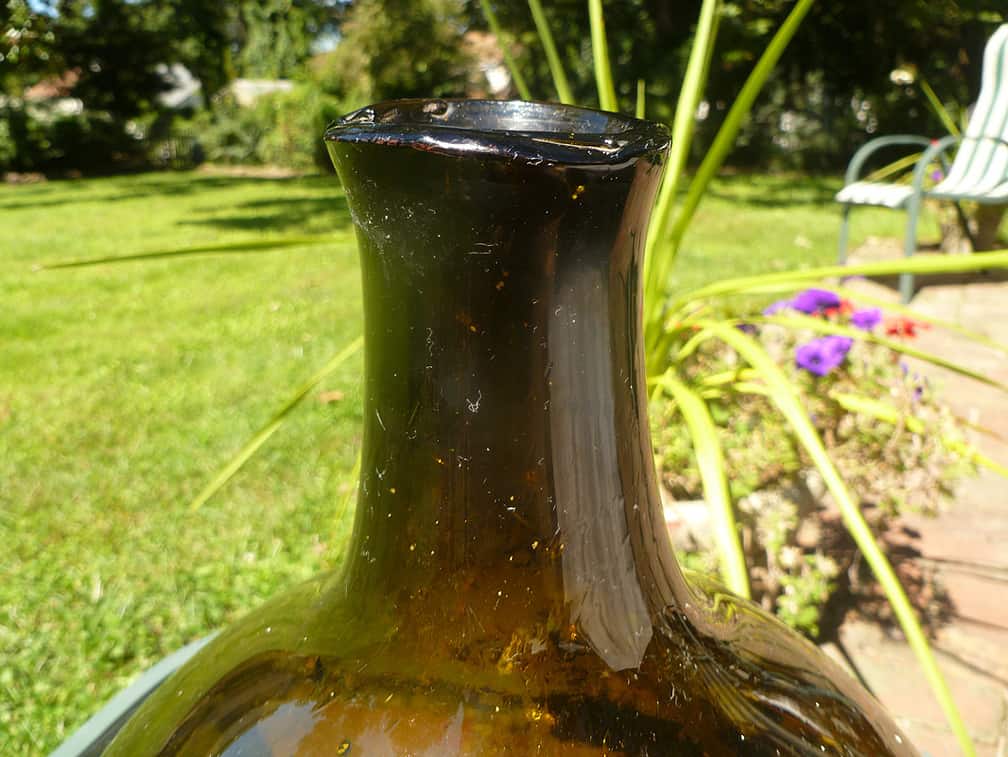 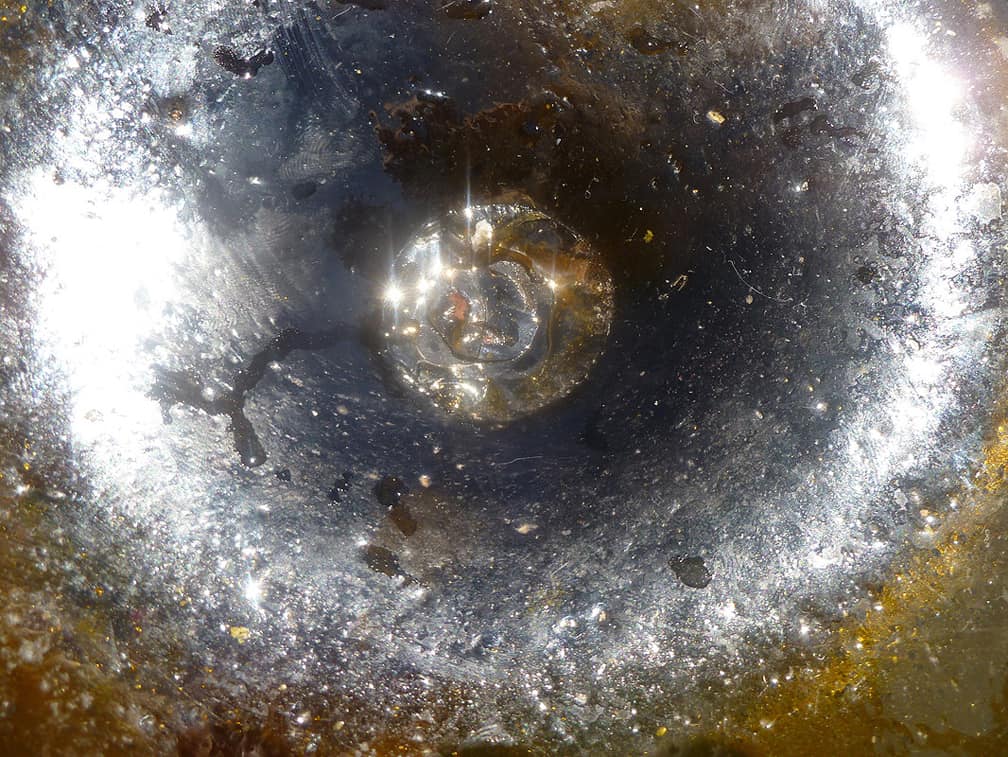