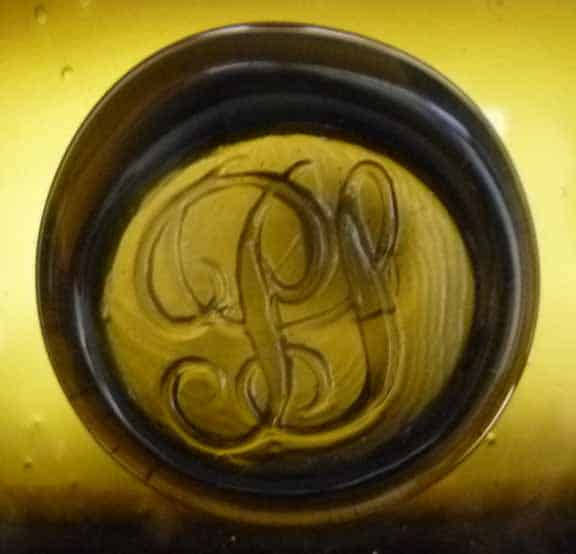 Part 2 of a Series

A glass works was founded on what would become State Street in the present day Brooklyn, NYC in 1754 by the Glass House Company of New York. It was to be located near one of the partners, Lodewyk Bampers home. These works were the second ones built by the Glass House Company, as three years prior they had founded the glass house 70 miles north in the village of New Windsor, now present day Newburgh.

Johan Martin Greiner again designed the glass works and skilled glass blowers from Bristol and Germany were acquired for this venture. An advertisement placed in the New York Gazette or Weekly Post Boy on October 7th, again on Oct 14th and lastly on the 21st of October in 1754 stated:

The key words in the advertisement are, “Gentlemen that wants Bottles of any size with their names on them”. This is huge in the attribution of North American made sealed gentleman’s bottles. Many glass historians have always dismissed the notion that these type of bottles could have been made here in the Colonies and have just assumed they were always made in Europe in the countries of England, Germany, Holland, France or Scandinavia.

Glass historian Frederick Hunter looked at bottles in the Van Cortlandt Museum with seals impressed upon them of Sidney Breese 1765, and another with the initials F V C which stood for Fredrick Van Cortlandt with the date 1765. After examination, and in his own judgment, Hunter said they looked every bit the type made at Wistarburgh where he had previously found seals walking the grounds of the factory site. Even though Hunter felt the bottles were most likely made at Wistarburgh, and I believe he is incorrect, it has become quite evident to me they were a product in present-day New York City, most likely by the Glass House farm which was in operation in 1765.

A friend of mine, Gary Katzen from Haddonfield, New Jersey and a fellow glass collector with an amazing milk glass collection (Read: Gary Katzen Milk Glass Collection), has in his possession, a bottle with a seal of the initials “P S”. This bottle has been attributed by glass collectors and glass historians to Peter Stuyvesant, who served as the last Dutch Director-General of the colony of New Netherland from 1647 until it was ceded provisionally to the English in 1664, after which it was renamed New York.

By doing a little research, it becomes quite apparent that this bottle was was made in the style and era historically proven to be in the period of the mid 1700s. Armed with this information, it is now very easy to prove the bottle was not made for Peter Stuyvesant (the first), however quite excitingly, the bottle may have been made for his great, great grandson, Petrus (Peter) Stuyvesant (1727 – 1805). Petrus Stuyvesant (1727 – 1805) was an extremely influential New York merchant who was a close associate and neighbor of Lodewyck Bamper and as stated earlier, was a descendent to his very famous, great, great grandfather.

The pictures below represent Gary’s bottle photographed in his home and back yard. I feel pretty confident that bottles like this type were the ones being advertised by Lepper for the Glass House Company and they quite likely made this one, as there are just too many good reasons to believe otherwise.  A big thank you to Gary for allowing me to use his bottle pictures in this article. 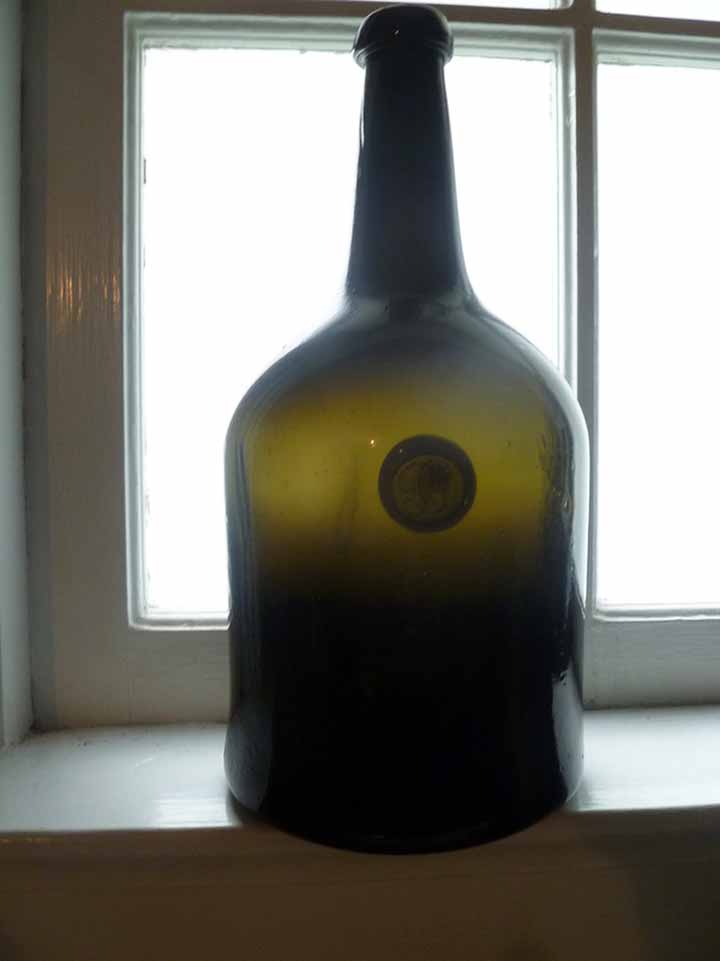 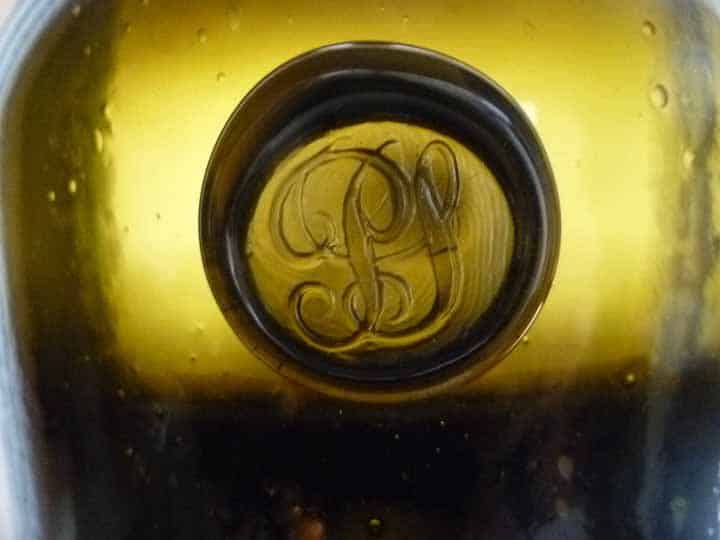 The impressed seal with the letters “P S” – Katzen Collection 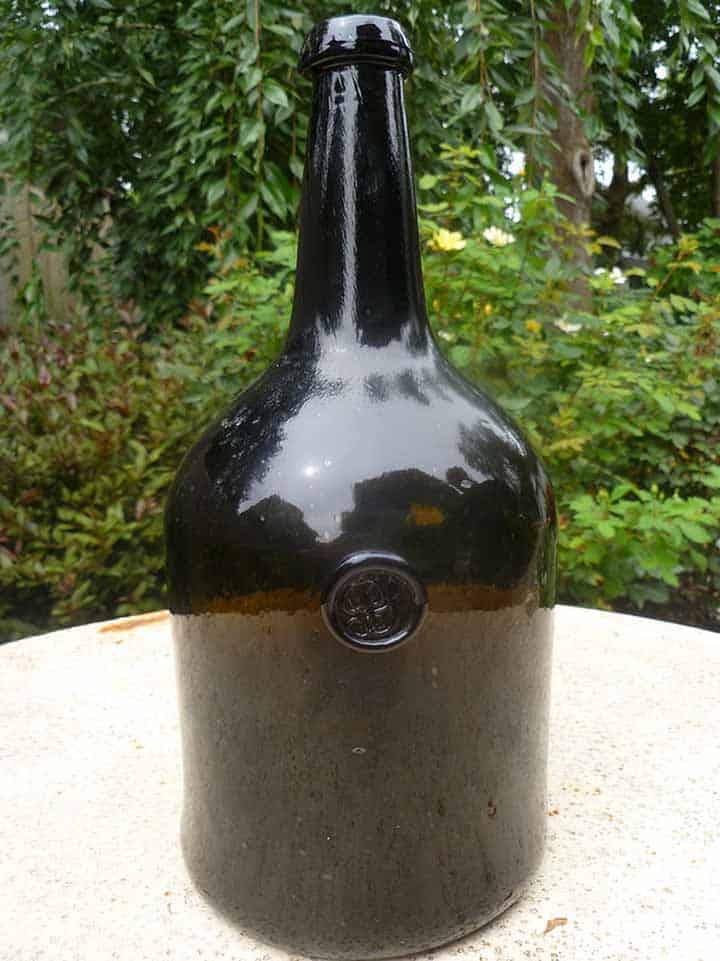 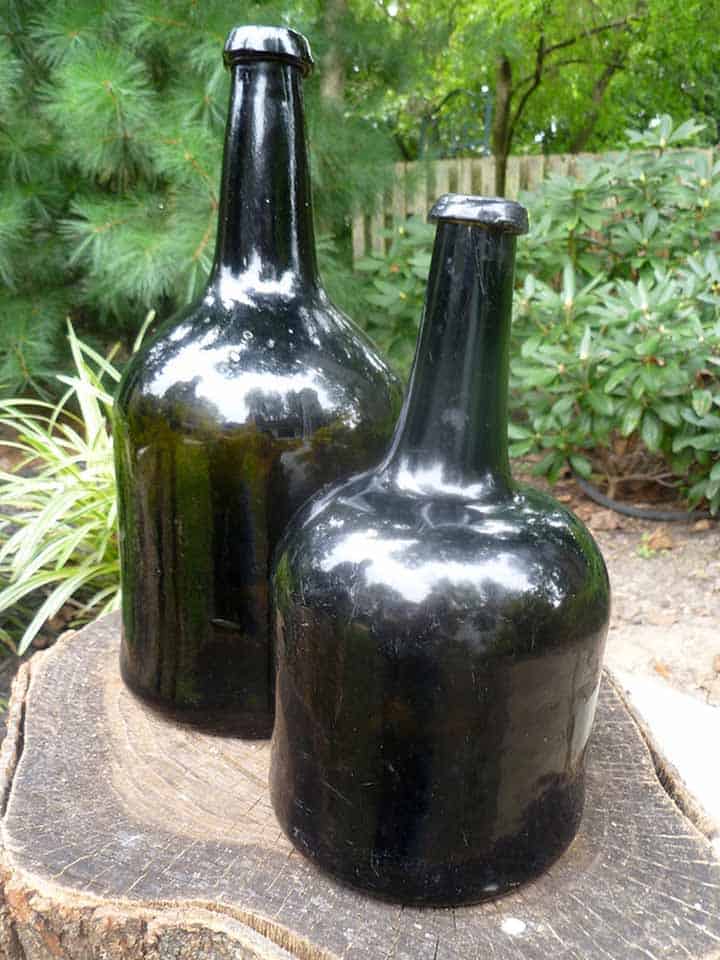 Photographed with a Wistarburgh attributed mallet type wine bottle. This bottle is a huge wine bottle as the Wistarburgh bottle stands 9 and a half inches tall. Both bottles are extremely dark in color. 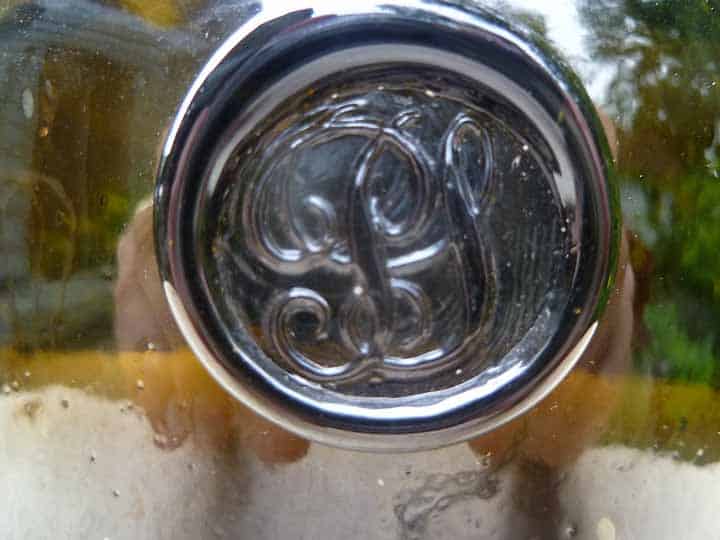 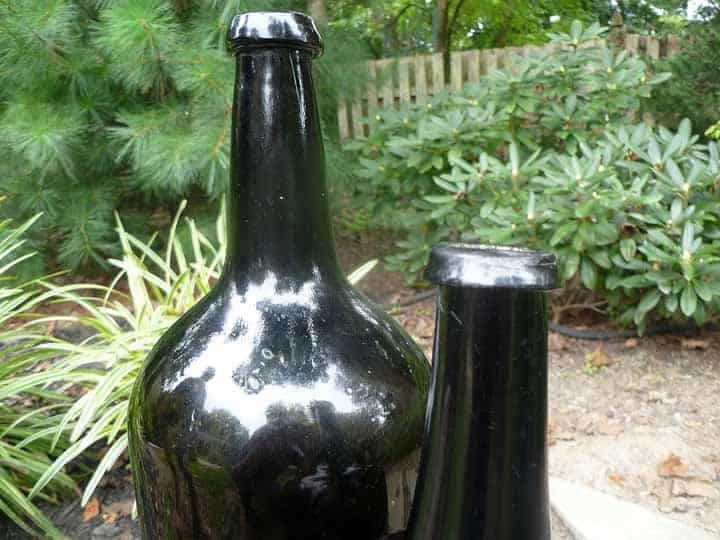 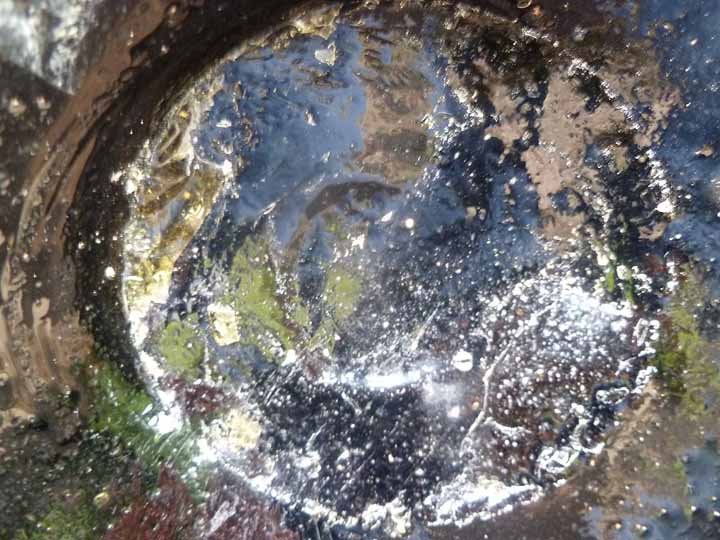 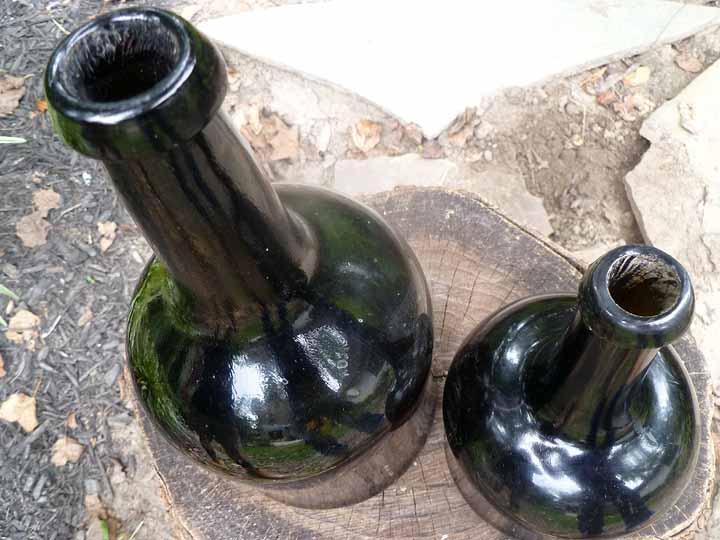 Looking down into each bottle, you can see similar markings on the inside of each lip. The bottle sports the famous Wistar rolled lip, suggesting a gaffer from the same region Caspar and his son Richard imported their workers from. 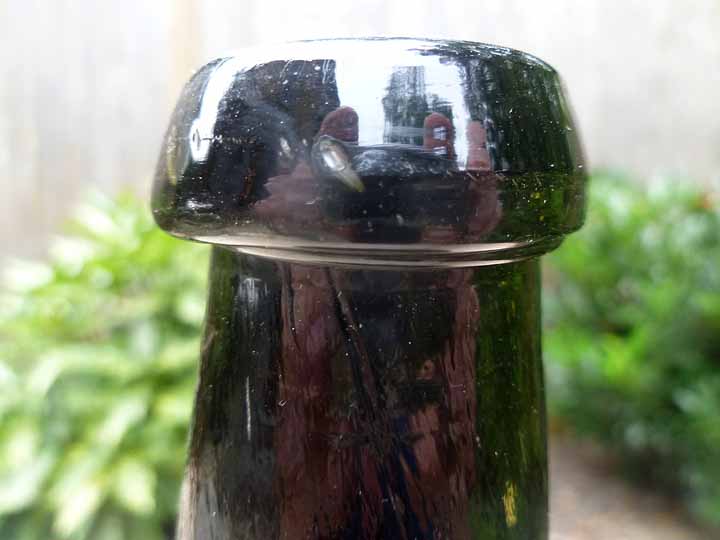 In close on the rolled lip, Gary suggested umbrellas and sheets and…I told him it would cost us a fortune to have these bottles professionally photographed!! This is good enough!! 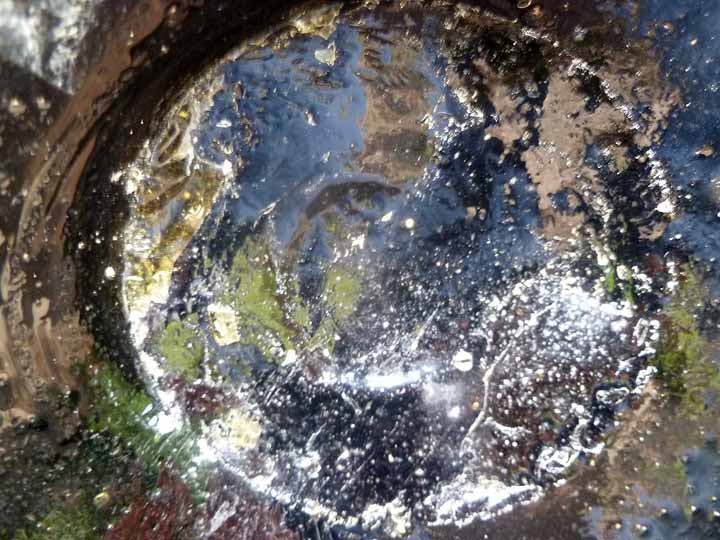 I have named this picture the world map pontil mark for I can see Africa and Asia like shapes in the areas within the sand pontil mark.