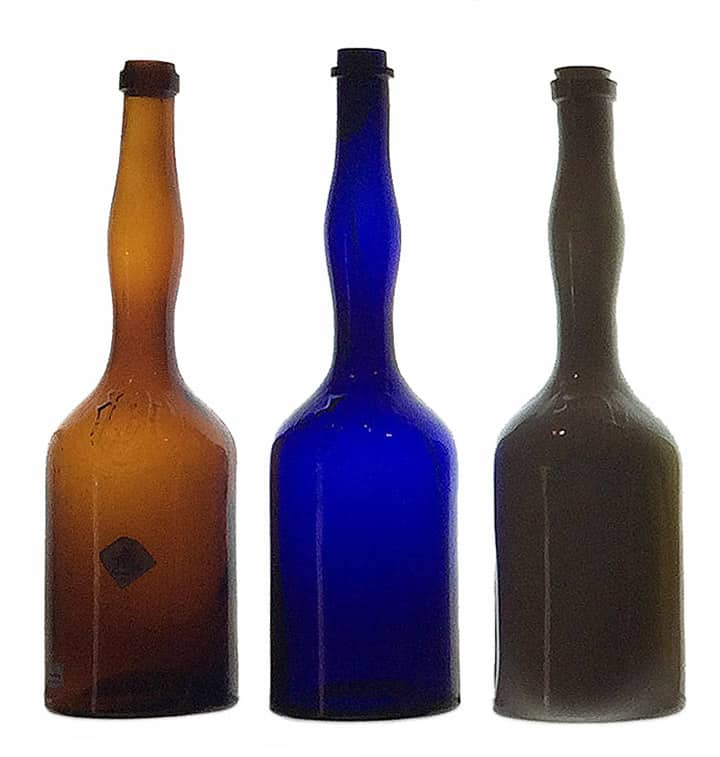 Looking at the motif of the monogram “PHD & Co.” on a Sazerac Aromatic Bitters bottle leads you to Patrick Henry Drake, the proprietor for the famous Drake’s Plantation Bitters. You can see the link with the product name and Drake below with the monogram in the advertisement from Bitters Bottles.

The bottles are called a figural lady’s leg due to the sensual shape of the bottle neck. Three great examples are pictured at the top of this post from the great Bill Taylor figural bitters collection out in Oregon. The cobalt blue example is unique. Bill is known for his extensive collection of lady’s legs bitters. 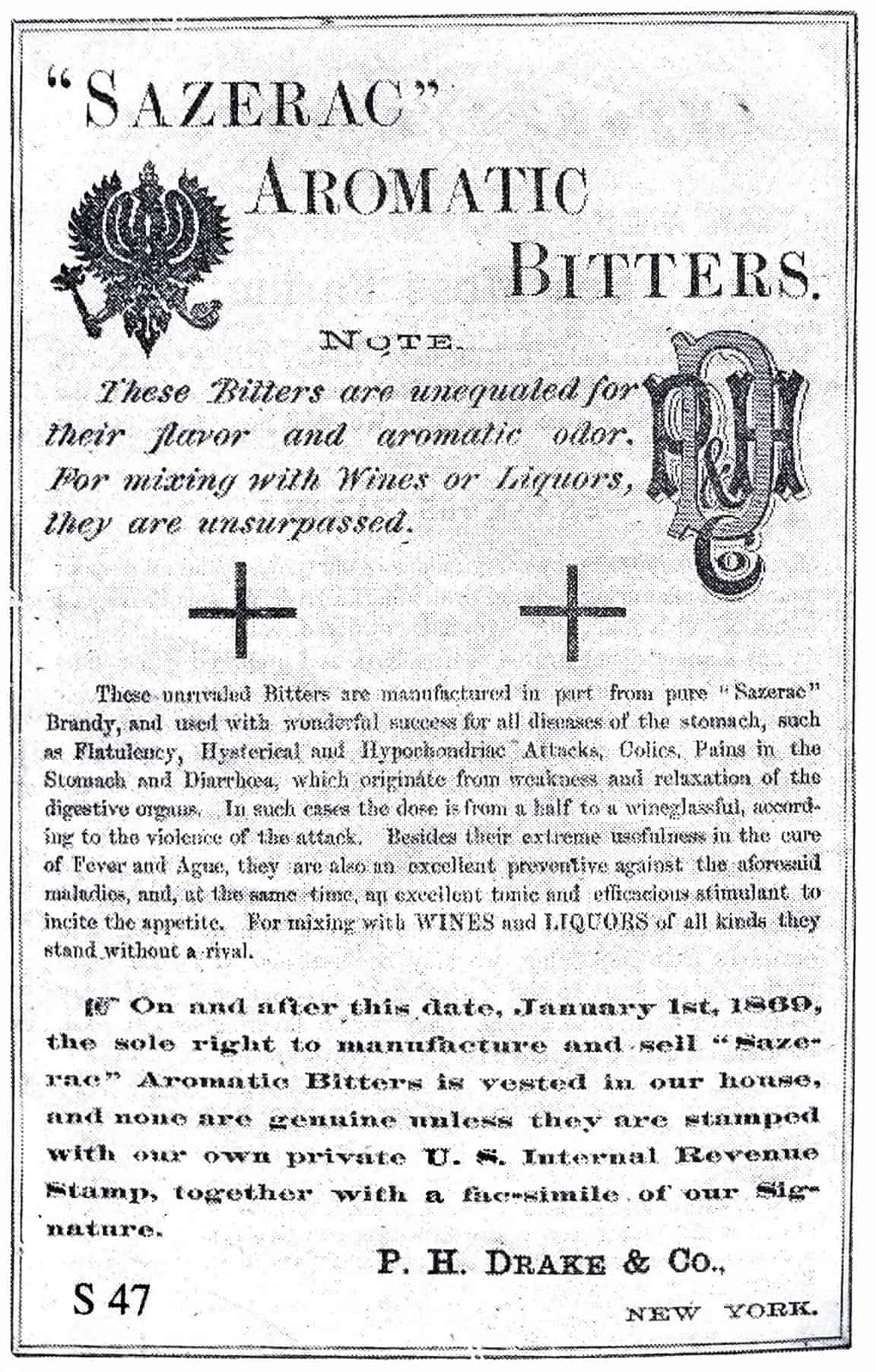 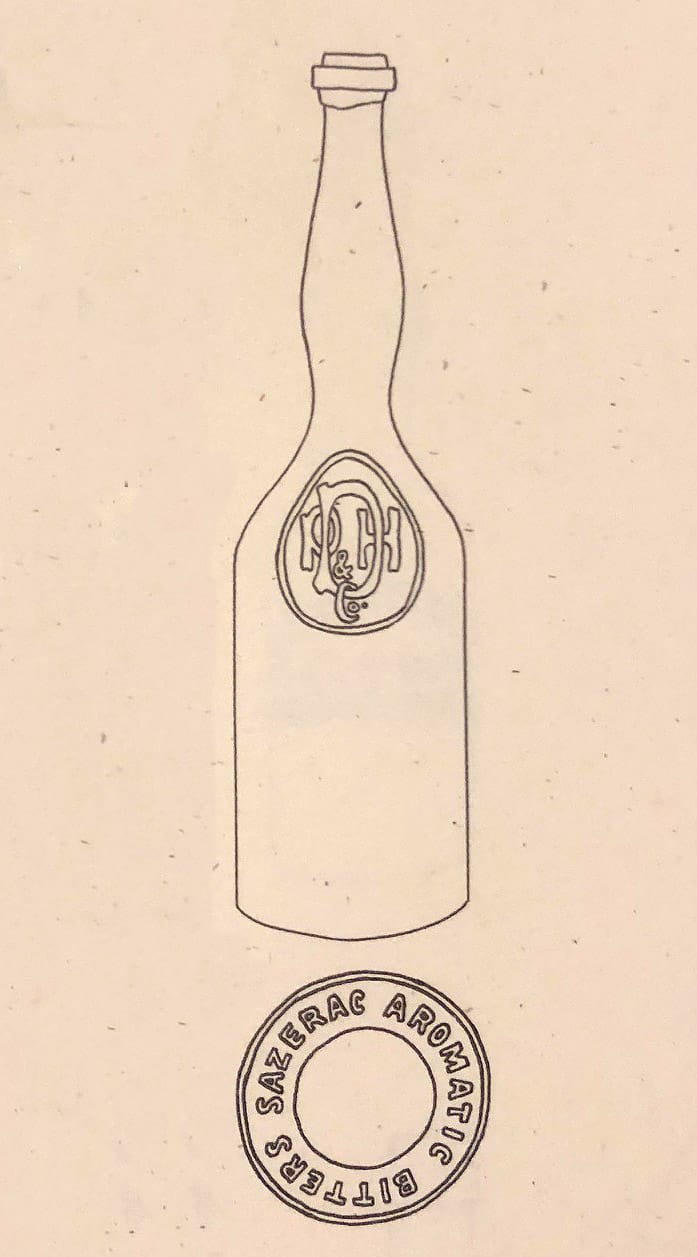 Note: Sewell T. Taylor, in the 1830s, imported Sazerac Brandy from Messrs. Sazerac de Forge et Fils, Limoges, France. In 1865, Tom H. Handy invented Sazerac Bitters from a secret formula based on boiled herbs. It is believed that this was a flavoring bitters originating in New Orleans.

If the PHD monogram stands for Patrick Henry Drake then this could be the Drake’s Sazerac Bitters, Thompson 117. 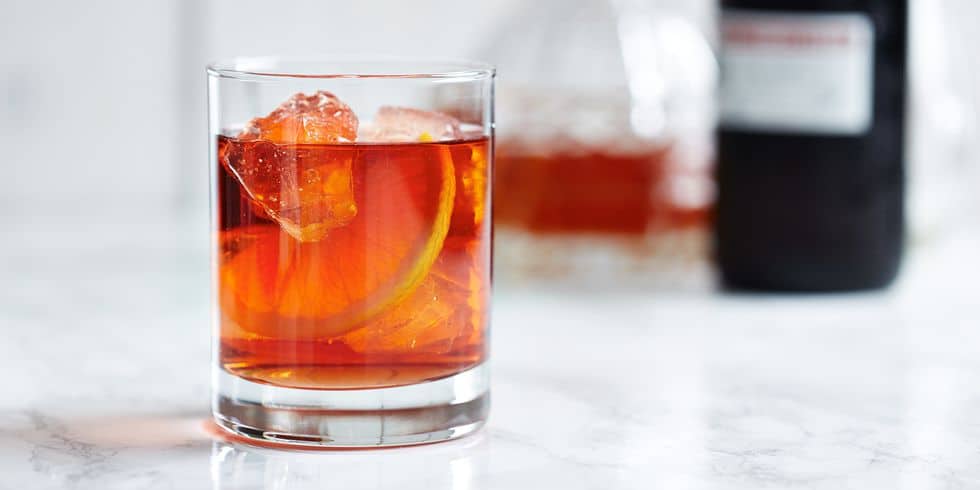 Legend has it that Bird began serving the “Sazerac Cocktail”, made with Sazerac cognac imported by Taylor, and allegedly with bitters being made by the local apothecary, Antoine Amedie Peychaud.

The Sazerac Coffee House subsequently changed hands several times, when around 1870, Thomas Handy became its proprietor. It is around this time that the primary ingredient changed from cognac to rye whiskey, due to the phylloxera epidemic in Europe that devastated the vineyards of France.

The creation of the Sazerac has also been credited to Antoine Amédée Peychaud, a Creole apothecary who emigrated to New Orleans from the West Indies and set up shop in the French Quarter in the early 19th Century. He was known to dispense a proprietary mix of aromatic bitters from an old family recipe.

According to popular myth, he served his drink in the large end of an egg cup that was called a coquetier in French, and the Americanized mispronunciation resulted in the name cocktail. This belief was debunked when people discovered that the term “cocktail” as a type of drink first appeared in print at least as far back as 1803—and was defined in print in 1806 as, “a mixture of spirits of any kind, water, sugar and bitters, vulgarly called a bittered sling.”

At some point, Patrick Henry Drake obtained the sole right to manufacture and sell Sazerac Aromatic Bitters. By this time he had split from Demas Barnes and formed P.H. Drake & Company in New York. Thought Drake commenced with his plantation bitters in 1860, he did not start marketing Sazerac Aromatic Bitters until January 1st, 1869. 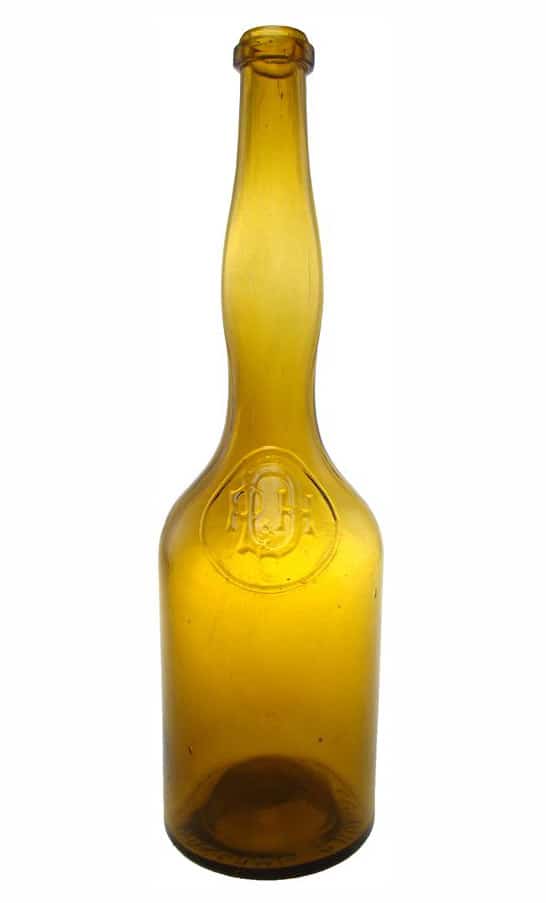 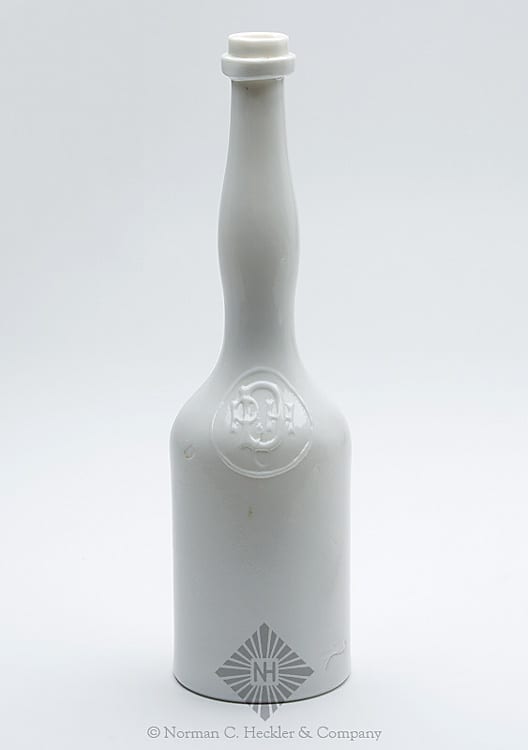 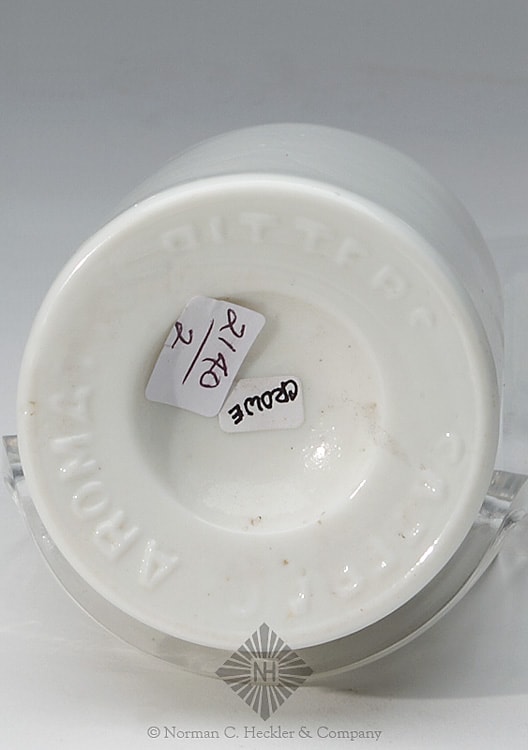 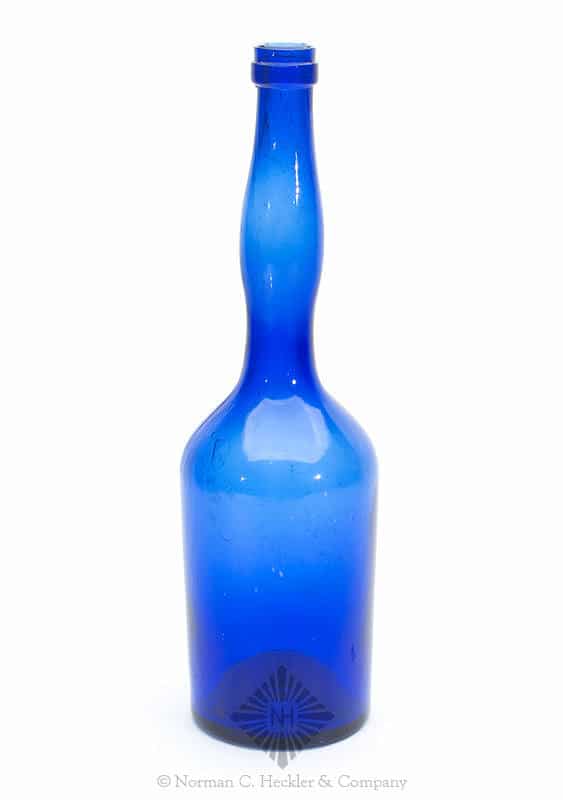 Ferdinand Meyer V is a native of Baltimore, Maryland and has a BFA in Fine Art and Graphic Design from the Kansas City Art Institute and School of Design. Ferdinand is the founding Principal of FMG Design, a nationally recognized design consultation firm. Ferdinand is a passionate collector of American historical glass specializing in bitters bottles, color runs and related classic figural bottles. He is married to Elizabeth Jane Meyer and lives in Houston, Texas with their daughter and three wonderful grandchildren. The Meyers are also very involved in Quarter Horses, antiques and early United States postage stamps. Ferdinand is the past 6-year President of the Federation of Historical Bottle Collectors and is one of the founding members of the FOHBC Virtual Museum.
View all posts by Ferdinand Meyer V →
This entry was posted in Bartending, Bitters, Brandy, Figural Bottles, History, Liqueurs, liquor, Medicines & Cures, Spirits, Whiskey and tagged Aromatic, bitters, Bottle, Brandy, cocktail, Figural, lady's leg, monogram, New Orleans, New York, P.H. Drake & Co., Patrick Henry Drake, Sazerac. Bookmark the permalink.