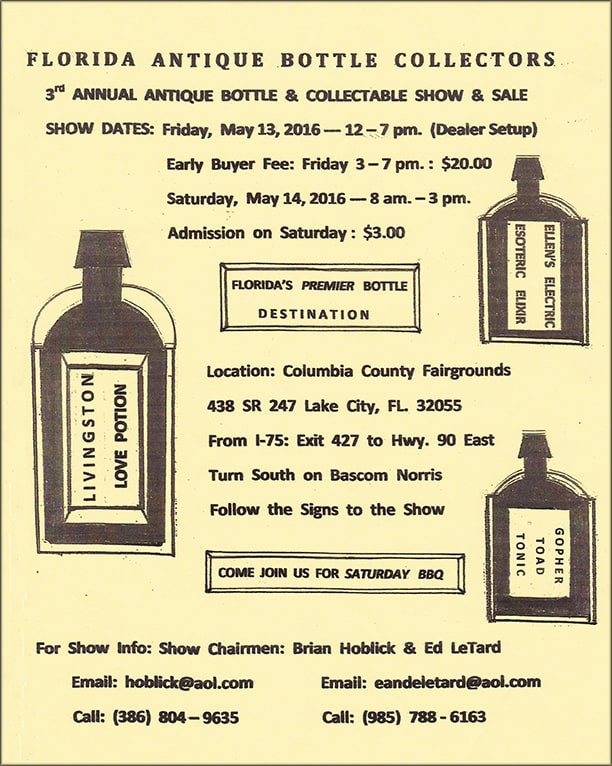 Was hoping for some dry weather this weekend so we could remove all of our stuff from the first floor of the house. Contractors coming monday to start flood repairs for 6 to 8 weeks. Floods warning too. Where can we get an ark?

Looks like contractors will take 6 to 8 weeks to rip out everything on the first floor. Looking for a Rent-A-Zoo or something for us, our 7 dogs, 5 cats, fish and 1000 + antique bottles. Speaking of antique bottles, look at this unlisted SONORA STOMACH BITTERS dug in Baltimore a couple weeks ago. It was in a wet brick lined outhouse about 8-10 feet deep. Researching now. Not much more to go on. Story forthcoming. Obviously a Hostetter’s wanna-be.

Canceled my trip to the east coast this week as we are dealing with cleanup, insurance and contractors this week from our flood last week (see video). Thanks for all the well wishes. Here is an email that I’ve been sending to a few people explaining us dropping off the radar:

I suspect you heard and saw that South Texas was hit by some epic and biblical like weather this past Monday. We get a lot of rain and average over 50″ a year but this was special with around 17″ or so in one day. Unfortunately Bessie’s Creek and the Brazos River left their banks. We sit in between. This has never happened in our area before.

Where I live (Waller County, west of Houston) was declared a State of Disaster (9 Counties total) with National Guard rescues etc. They asked us for a boat rescue twice but with our seven dogs and five cats, that wasn’t our desire so we moved operations upstairs. We live kind of remote and roads were under water. We lost our downstairs and a lot of stuff unfortunately. No basements in South Texas thank goodness.

I took off last week but did make it into the office Friday. Houston and county schools were also closed all week.

I was hoping we could postpone our meeting one week as we have contractors and insurance appointments starting tomorrow. Wife wants me here which makes sense. My apologies for such late notice but things are evolving. More storms headed in now so we are moving wet stuff that was outside to dry back inside. Yada Yada….

Jim Bender send this cool image of a poster for a meeting at the Log Cabin. 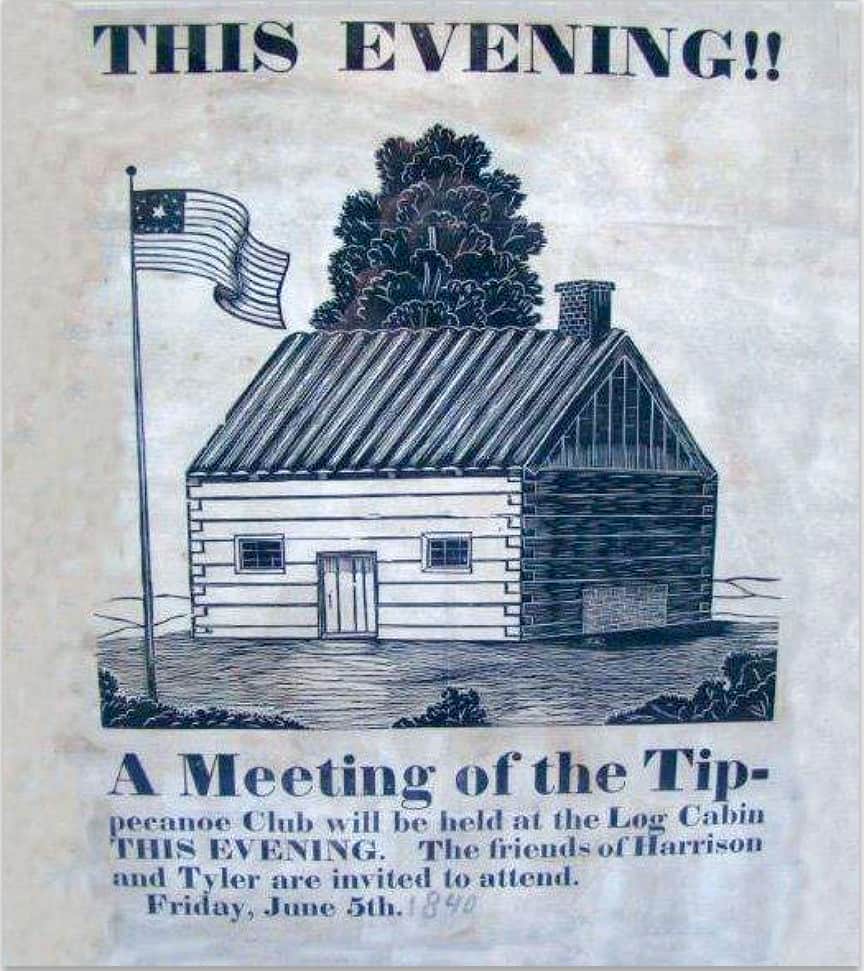 Also from Jim Bender late last week: Hey Ferd, I found this Drakes type bottle this past week end at the Rochester Show. I have seen these bottles before with no name on the roof but what I think is different is the base. It is marked M.S Recd No 812487 UCB Do you have any idea what this bottle is? 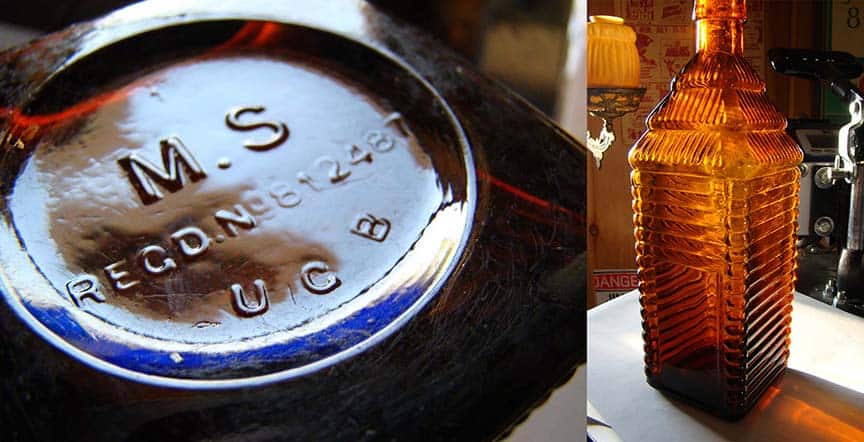 Hi Ferdinand, Just wanted to send along some spring color! Hope all is well, Cody Zeleny 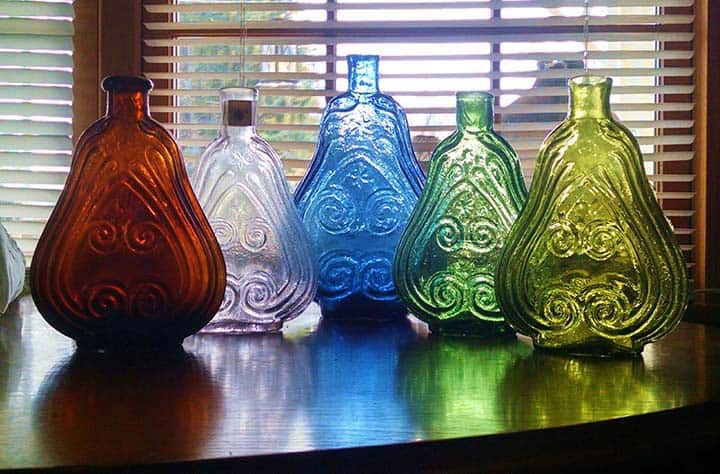 Ferd, Read your California Sherry Wine Appetizer or Stomach Bitters post on Facebook this morning. Here is some information that may contribute to solving this puzzler. While I can’t be certain, this bitters may have come from the ST. GEORGE VINYARDSof Fresno, California established in 1879. Now, if you were to substitute WINERY for VINYARDS, you would then have St. GeorGE Winery and you might have the missing name of the maker.

This information came from an advertising brochure in an eBay auction saved to my “wanted” list. In it is listed a California Sherry Bitters along with a number of other Sherries. These bitters is also unmentioned in any bitters reference book that I know of.

“Here are some pictures of the TYLER’S STANDARD AMERICAN BITTERS. I really was glad to get a BITTERS with AMERICAN in the name. The TYLER’S is T72 in Ring & Hams Bitters Bottles book. It says it is rare. I believe it should be in the next bracket, “Extremely Rare.” Bob Strickhart believes there are only about 4 known? I think it is possibly a New England bitters.” 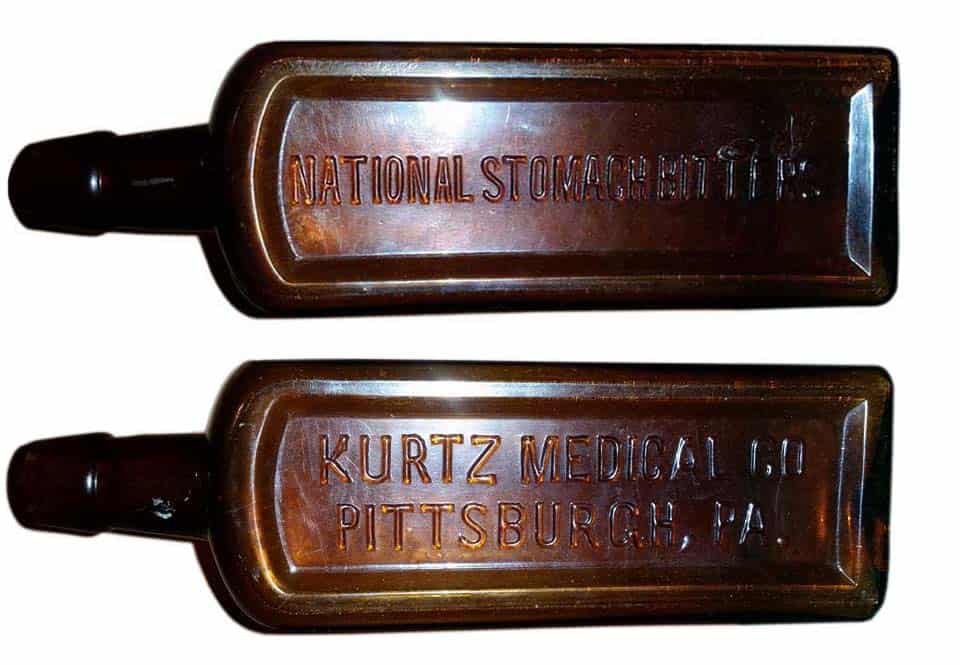 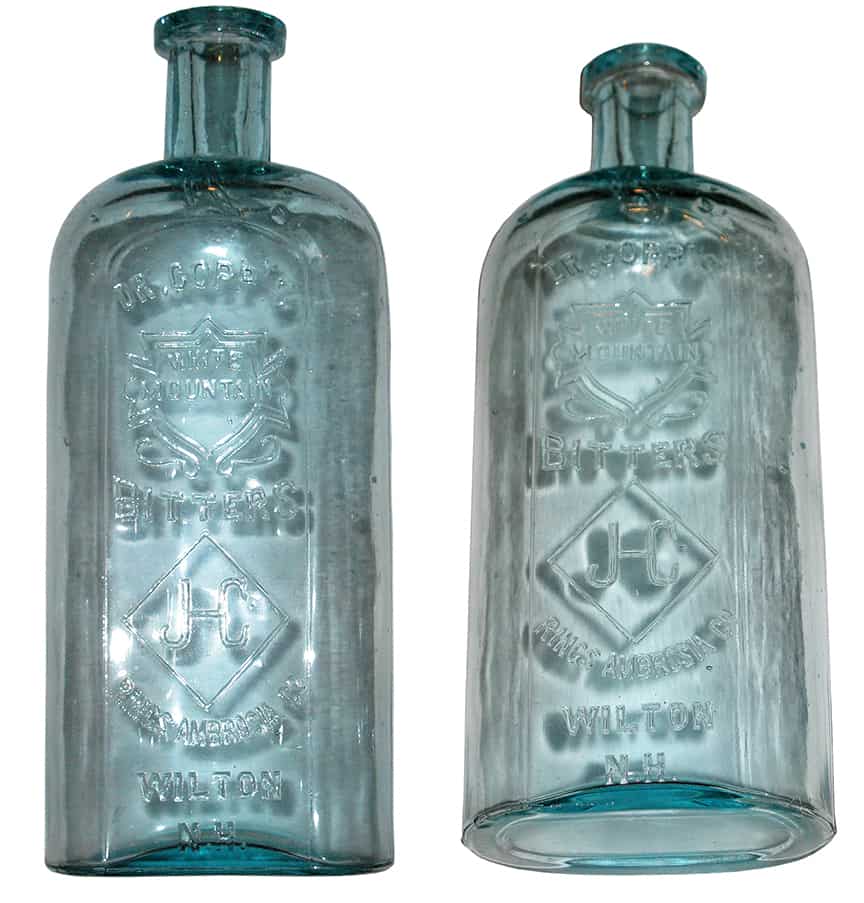 I was reading through your past write up on the Dr. Copp’s White Mountain Bitters and noticed that you don’t have anything on there about the variant. There is another version that is identical except below the JC monogram it is embossed “Ring’s Ambrosia Co,/Wilton, N.H.”  I have a damaged example…if you would like I’ll try to get a photo of it tonight.  It is the only example I have seen…bought it many years ago now with a damaged Manchester example that I have since sold. Ring’s Ambrosia Co. put out a number of other medicines, including several other embossed bottles.

Hi Ferdinand, Your collection of Clarke’s bitter bottles is amazing! My husband’s family are direct descendants of Dr. Clarke of Sharon, Massachusetts. Dr. Clarke is third great-grandfather to my children. “Dr.” Clarke — as he had “no degree from a medical college,” according to the family history — manufactured at one time 36,000 bottles of bitters per month. Family history writes that in an old newspaper article the large number of bottles, ‘will not seem incredible, when we are aware that the doctor’s portrait, which is on each bottle, is as familiar a sight at the trading stations on the West Coast of Africa, in
Honolulu, and the Sandwich Islands as in the country stores of New England.’

Dr. Clarke’s Sherry Wine Bitters ‘acquired a worldwide reputation as a cure for asthma, dyspepsia, and general debility,’ the article also states. A fun family fact of Dr. Clarke is that in the family, the Clarks before him never spelled their name with the final “e.” Dr. Clarke must have liked having that extra “e” for some reason. All direct descendants of
Dr. E. R. Clarke have hung on to that final “e.” My children’s great-grandfather (deceased 2003) shared Dr. Clarke’s name, Edwin Richards. His wife, Mrs. E. R. Clarke, is still living and celebrates her 98th birthday next month. Her name is Elizabeth. She has always been a history buff and told me the story of Dr. Clarke’s patent medicines when I married into the family, even showing me a piece of one of Dr. Clarke’s bottles with his name intact. I thought you would appreciate some information about the man on the bottles you collect. 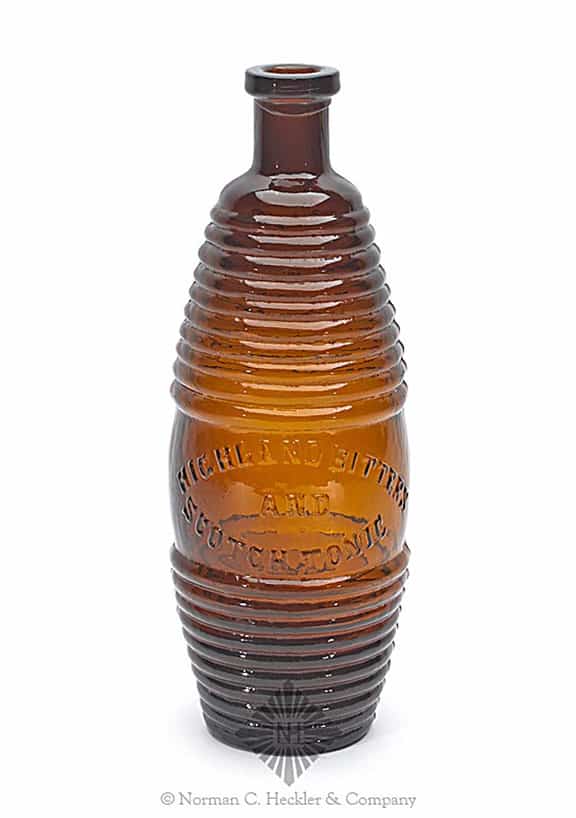 1859 advertisement below from The Louisville Courier for Dr. Brunon’s Bitters from New York. Listing only for advertisement in Bitters Bottles as B 239. 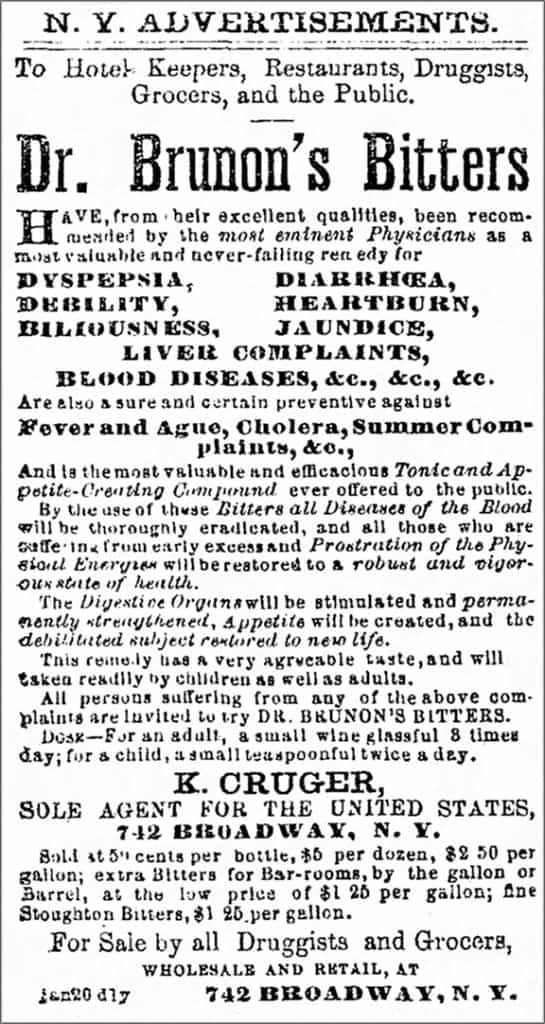 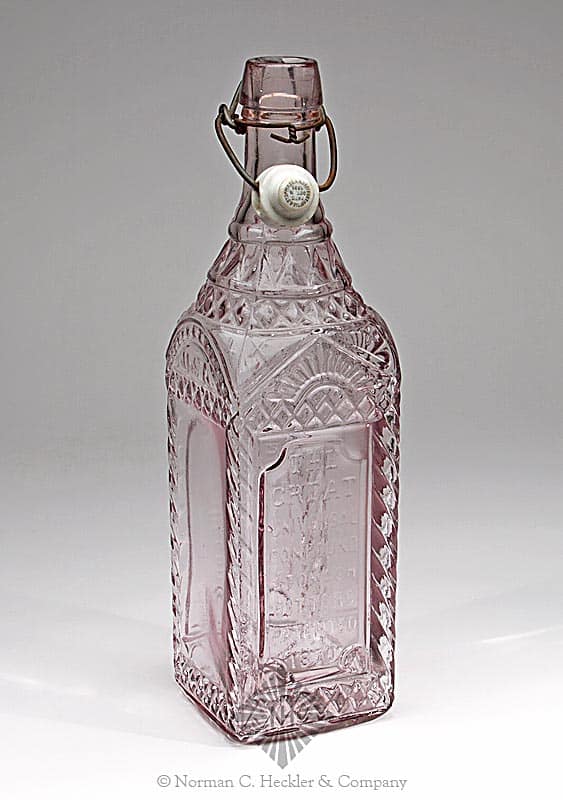 Updated The Bust of Columbia Liberty Cap Eagle Historical Flask post with this image of three half pints from an anonymous collector. 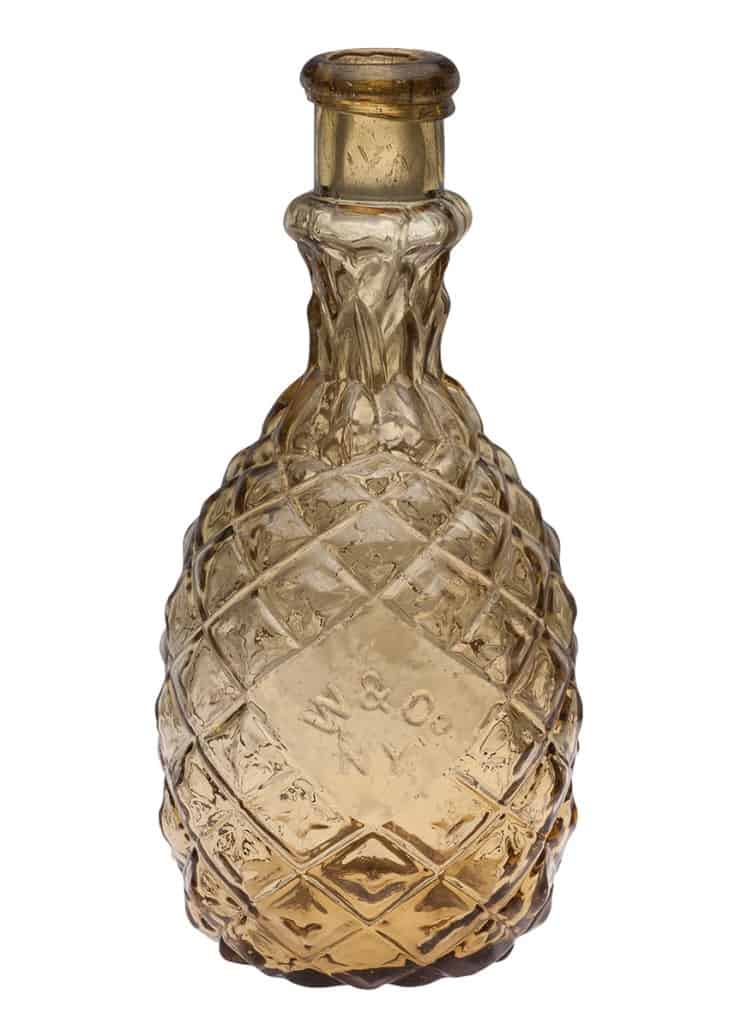 Greenbacks are Good but ROBACK’S ARE BETTER, Green Roback’s are best!! 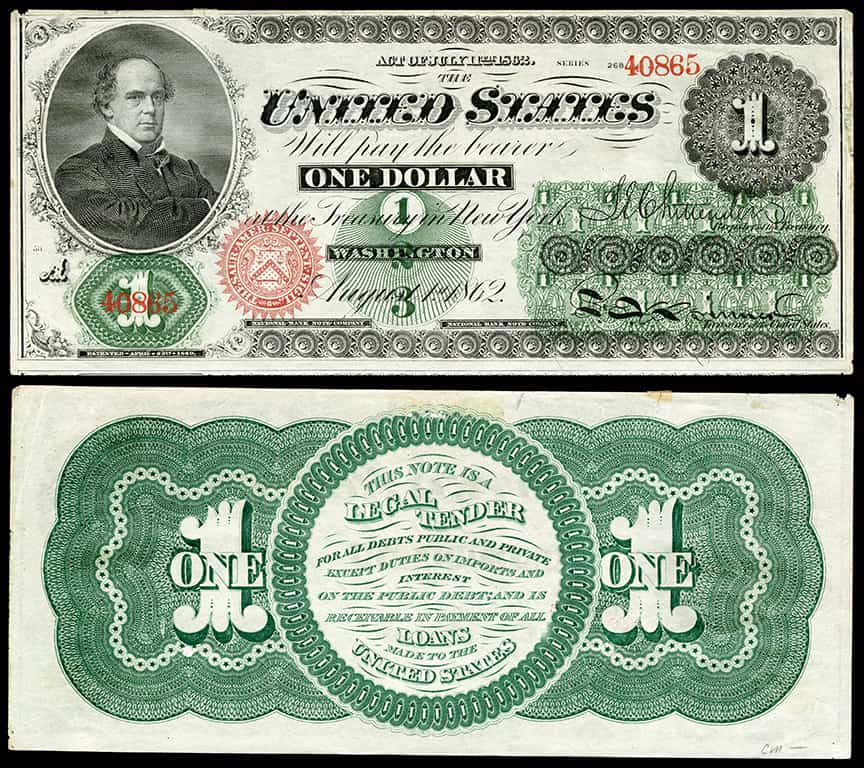 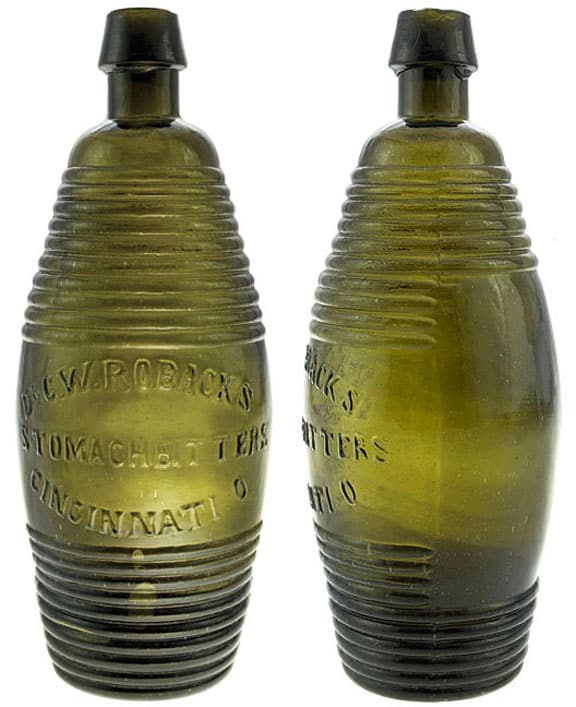 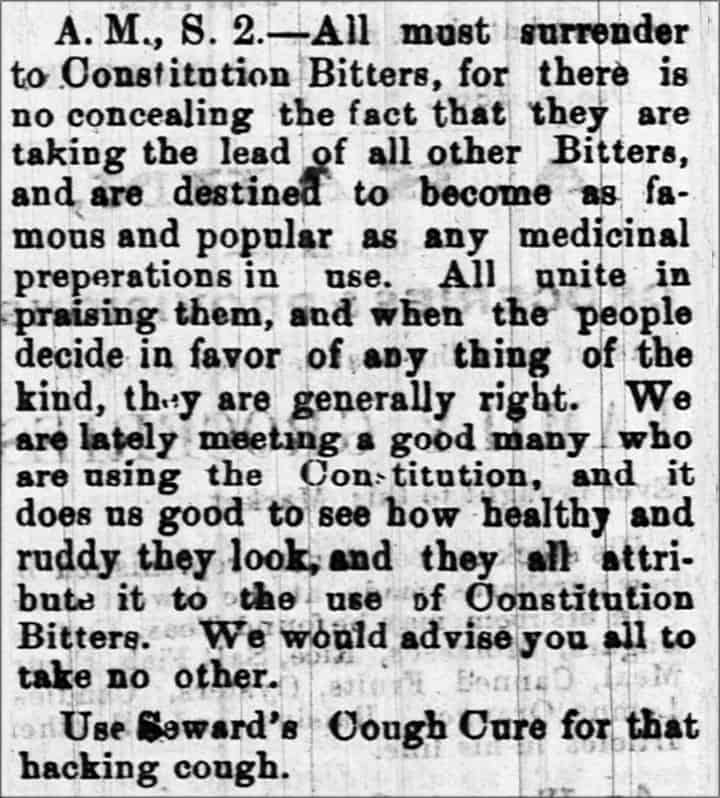 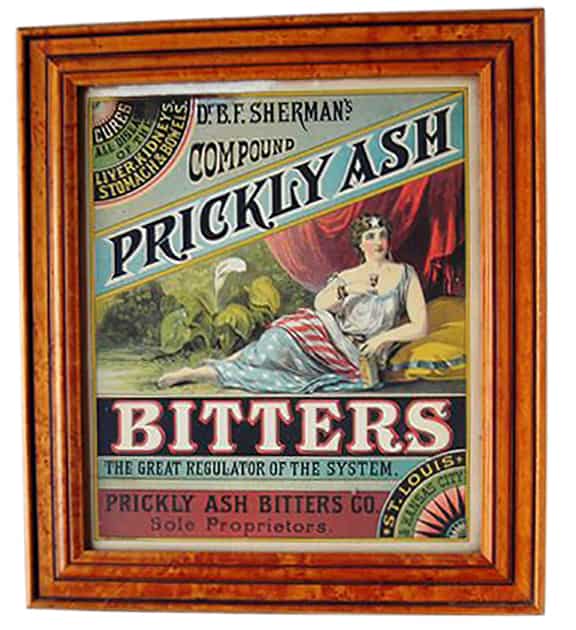 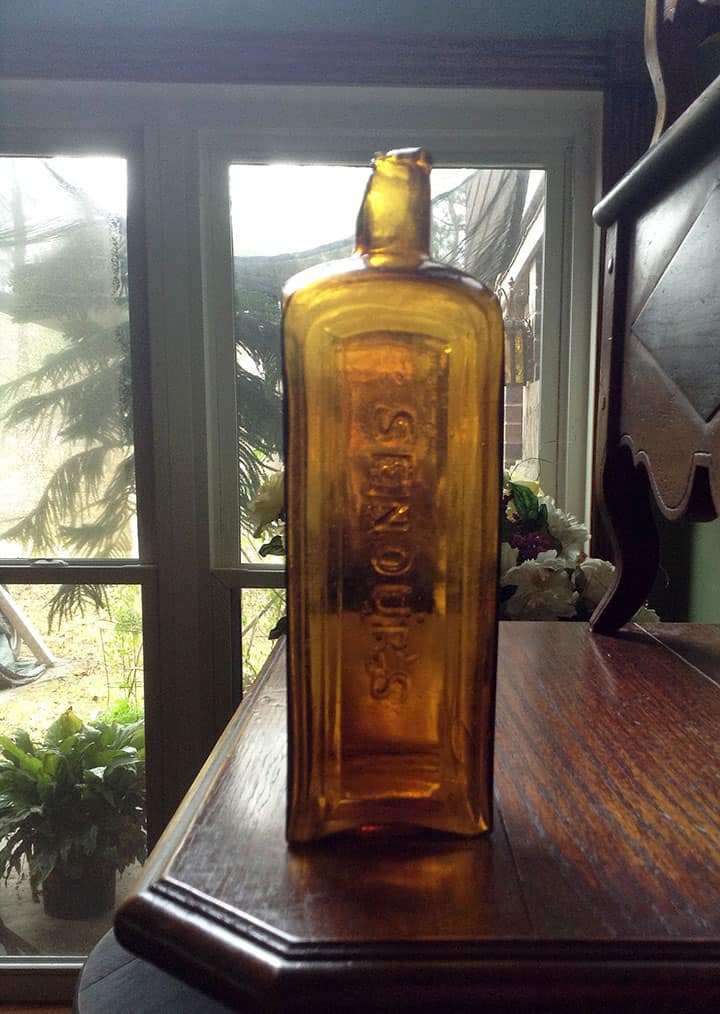 Off to Dallas and than San Antone tomorrow night. Baltimore next week for the show and FOHBC board meeting. Here is another Senours Calisaya Bitters that crossed my path today (see above). Obviously with a problem. That makes the one dug last month (see below) and this one, the only examples that I have seen.

The bottle is about nine inches tall. It has no other damage other than the top. It does have some oxidation from being dug. In a window it is honey amber. On the Senours side it displays nicely. The bottle with the rigaree, I found in an antique mall in Corpus Christi about twenty years ago. The only other one like it I have seen was in a New England bottle auction catalog about ten years ago. The only difference is that this one is a quart and the other was  a pint. It is cloudy inside. Pontiled with wide wear band. If you are interested in the Senours what ever feels good to you is fine. Thank you for your reply. If you know anyone that needs custom furniture in the 18th or early 19th century style. This what I do. Johnolsonfurniture.com Have a blessed day.

Ferdinand Meyer V is a native of Baltimore, Maryland and has a BFA in Fine Art and Graphic Design from the Kansas City Art Institute and School of Design. Ferdinand is the founding Principal of FMG Design, a nationally recognized design consultation firm. Ferdinand is a passionate collector of American historical glass specializing in bitters bottles, color runs and related classic figural bottles. He is married to Elizabeth Jane Meyer and lives in Houston, Texas with their daughter and three wonderful grandchildren. The Meyers are also very involved in Quarter Horses, antiques and early United States postage stamps. Ferdinand is the past 6-year President of the Federation of Historical Bottle Collectors and is one of the founding members of the FOHBC Virtual Museum.
View all posts by Ferdinand Meyer V →
This entry was posted in Bitters, Daily Dose, Digging and Finding and tagged bitters, Calisaya, Daily, Dose, dug, Senours. Bookmark the permalink.