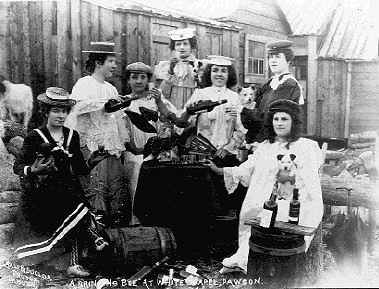 PART II of a Series

It is time to open the second gallery of vintage drinking pictures as the first galley filled to volume. This is a continuation of Photographs of People Drinking – Part I). If you have any candidates for inclusion, please forward. Thanks. 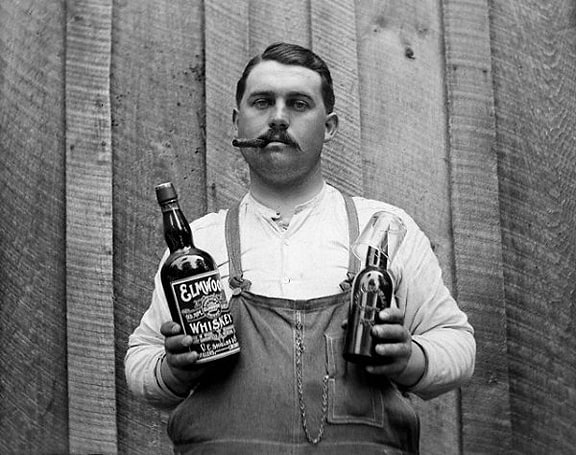 Old School Party (ca. 1900) – A cigar smoking man poses with a bottle of whiskey and a bottle of beer. –Image by © DaZo Vintage Stock Photos/Images.com/Corbis 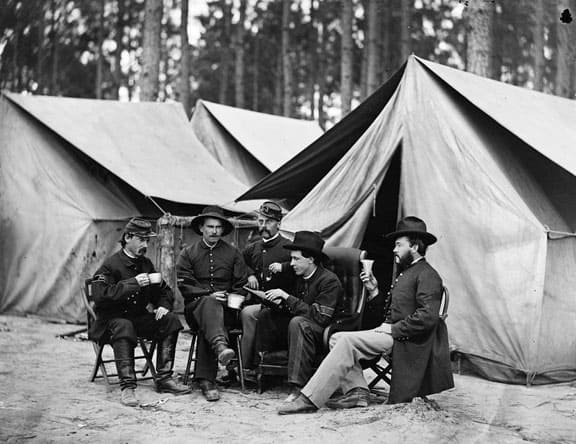 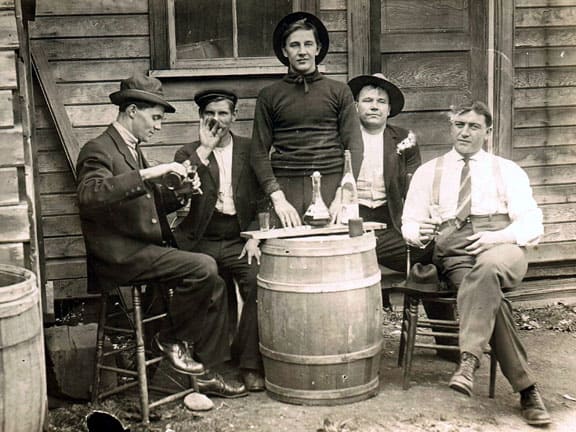 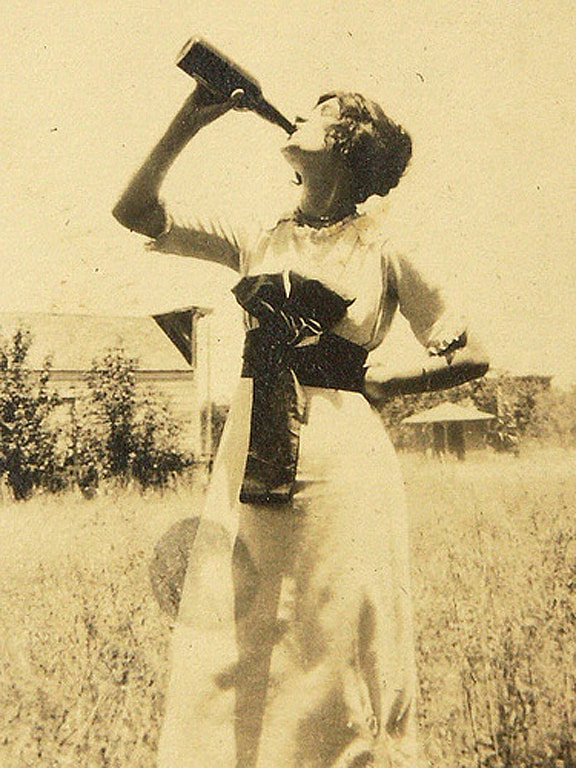 Woman drinking from a whiskey bottle. 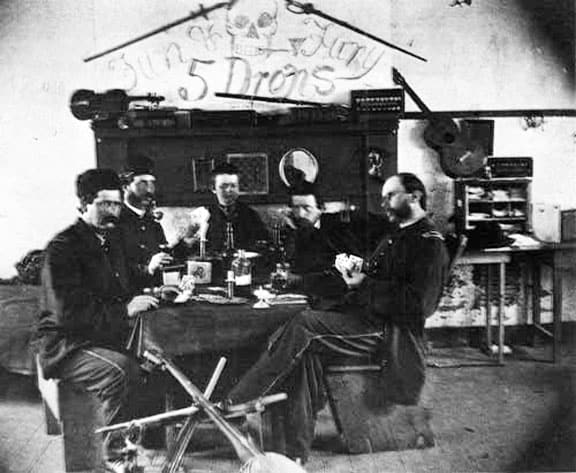 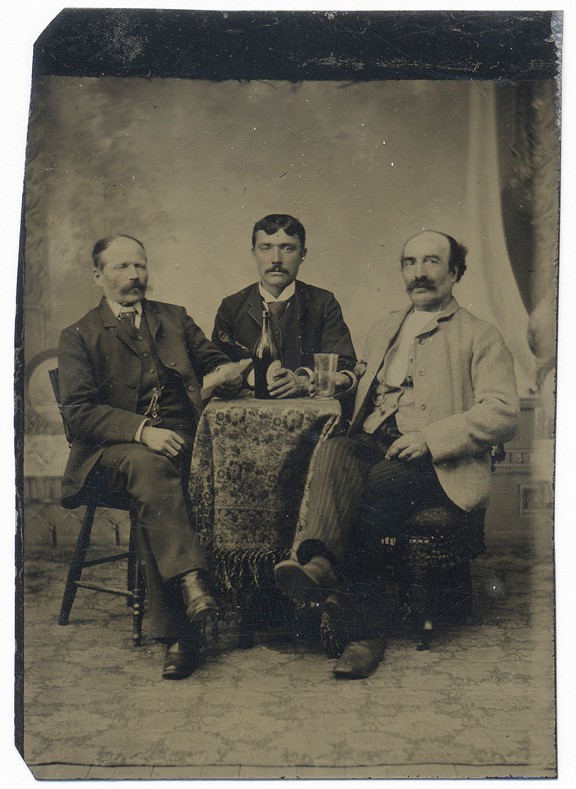 Three Men Seated with a Wine Bottle, Paper, & Glass – Tintype Photo – An interesting tintype with three men seated at a table. The man on the left is holding a piece of paper. The man at the center has his hand on what appears to be a wine bottle with a circular label. The man at the right has his hand on a drinking glass. This tintype was found in Elmira, N. Y. – eBay (imajgin) 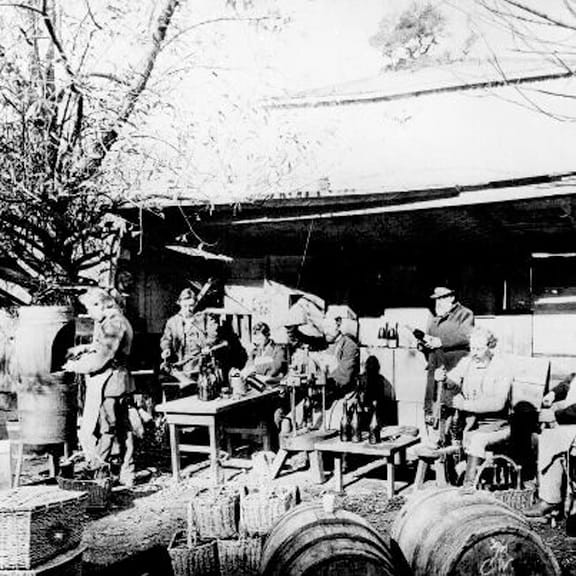 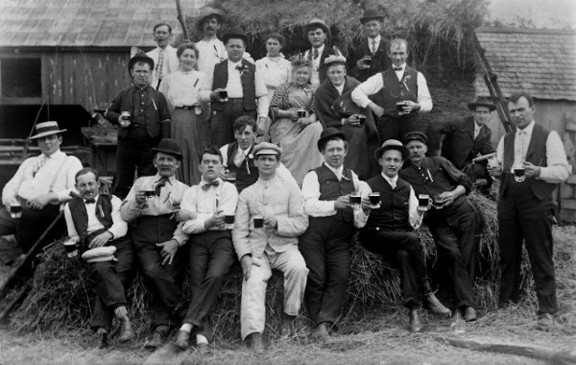 Circa. 1905– A beer drinking group pauses the party for a photo. –Image by © DaZo Vintage Stock 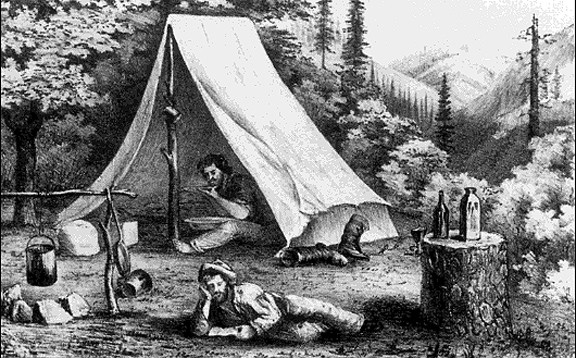 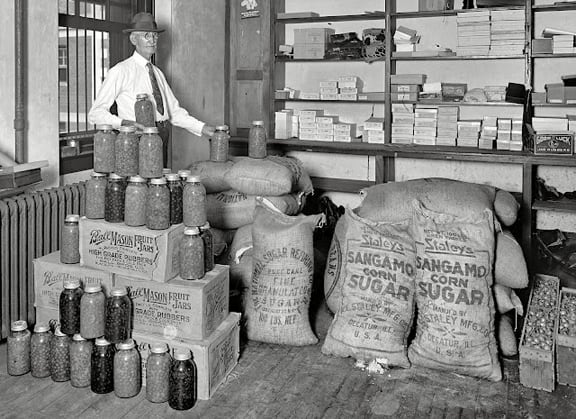 For you fruit jar fans, a photo of cases of Ball jars confiscated as “bootleg paraphernalia” during Prohibition.
Photo from the Library of Congress 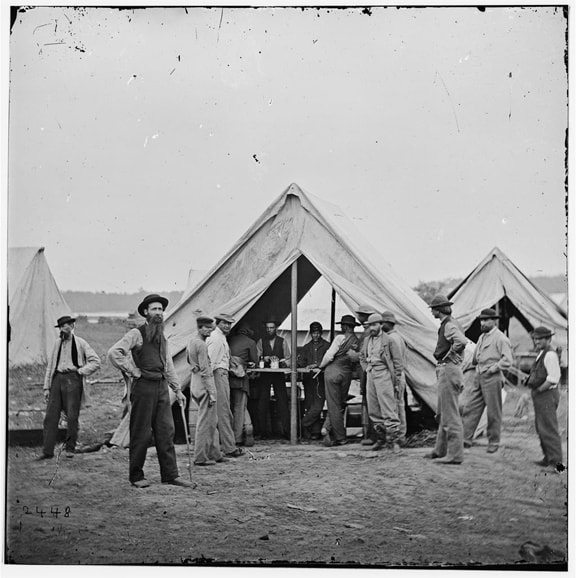 Sutler’s Tent – Petersburg – A sutler is a civilian merchant who sells provisions to an army in the field, in camp or in quarters. The sutler sold wares from the back of a wagon or a temporary tent, allowing them to travel along with an army or to remote military outposts. Sutler’s wagons were associated with the military while chuck wagons served a similar purpose for civilian wagon trains and outposts. 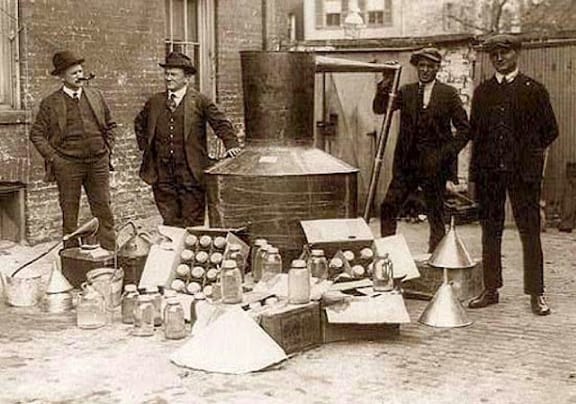 Photo of cases of Ball jars confiscated as “bootleg paraphernalia” during Prohibition.
Photo from the Library of Congress 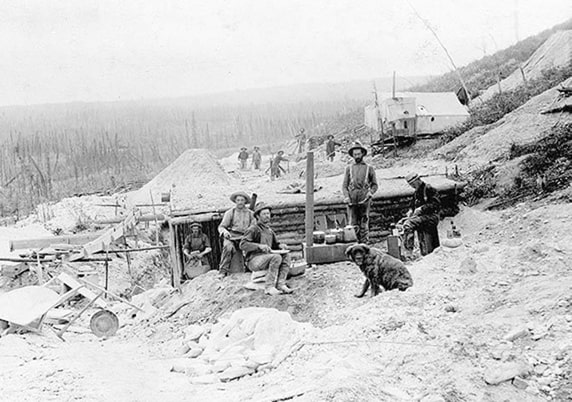 Mining operation showing miners working, eating within view of cabins and flumes, Hunker Creek, 1899. A little coffee after a hard night of whisky. – University of Washington 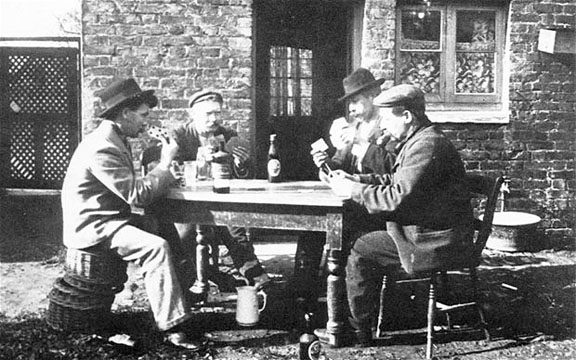 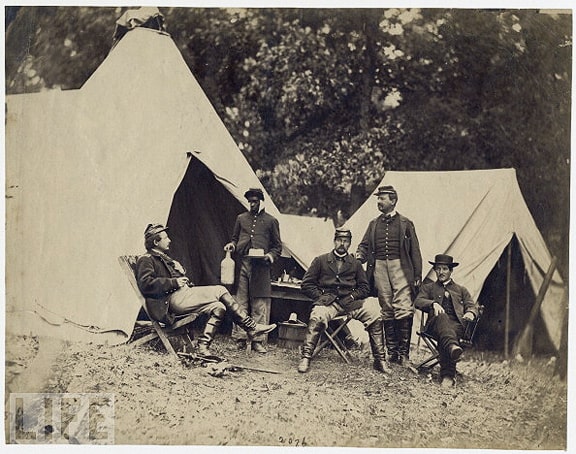 Confederate soldiers at their campsite play poker, while drinking and smoking between battles. 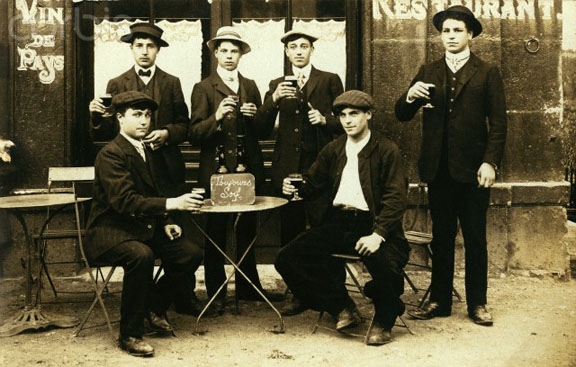 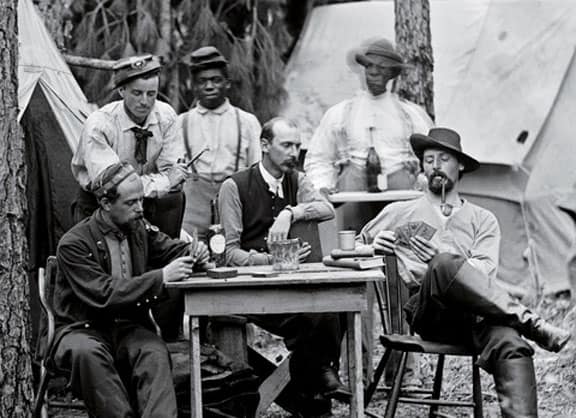 The Civil War – Between the Battles, with two slaves serving them. – PBS 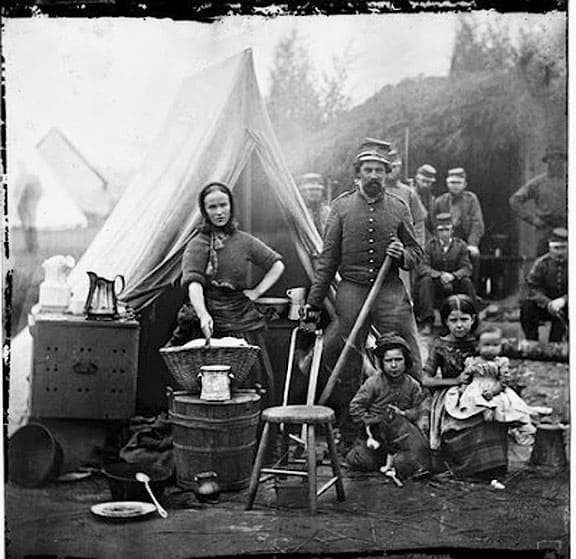 “Throughout the Civil War, coffee was as prevalent on the battlefields as it is in offices today. In fact, the Union army was fueled by the stuff to the point that, if there was no time to boil water, the Boys in Blue would chew on whole beans as they marched. And at night, Union campsites were dotted with tiny fires, each boiling a pot of coffee like a million miniature Starbucks. Beyond caffeine cravings, Union troops loved their coffee because it was, literally, the best thing on the menu.” – Library of Congress 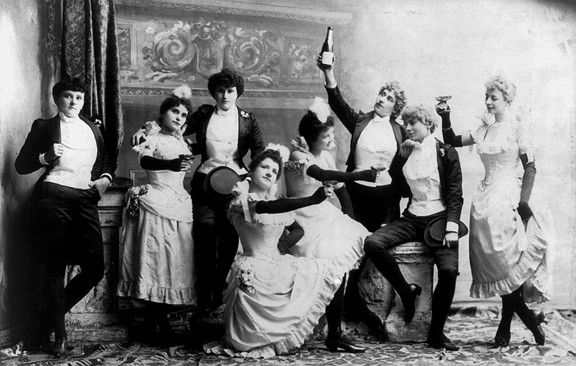 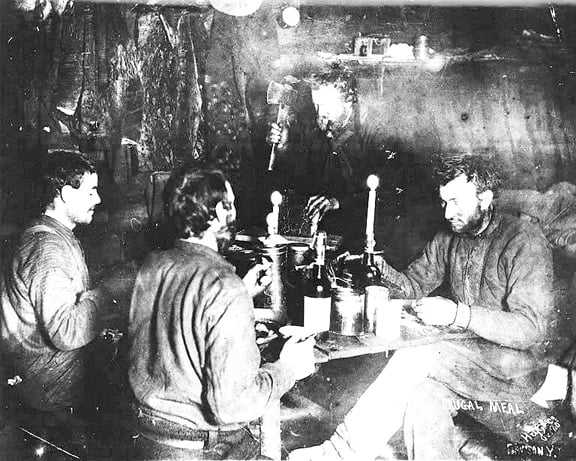 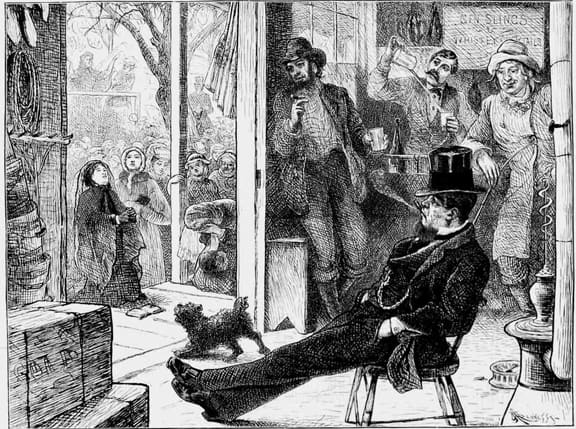 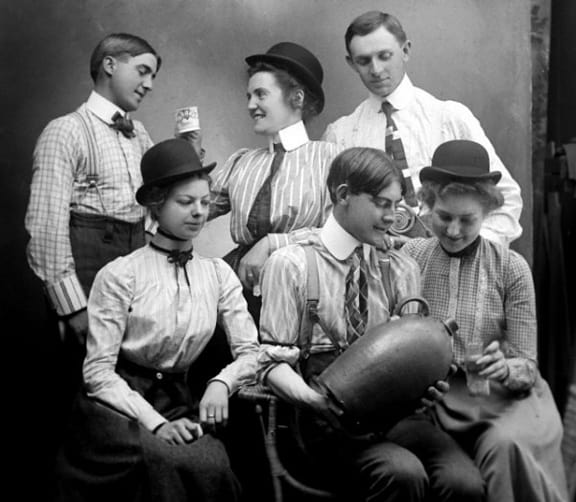 Circa. 1900– A group of young adults drinking alcohol from a jug. –Image by © DaZo Vintage Stock 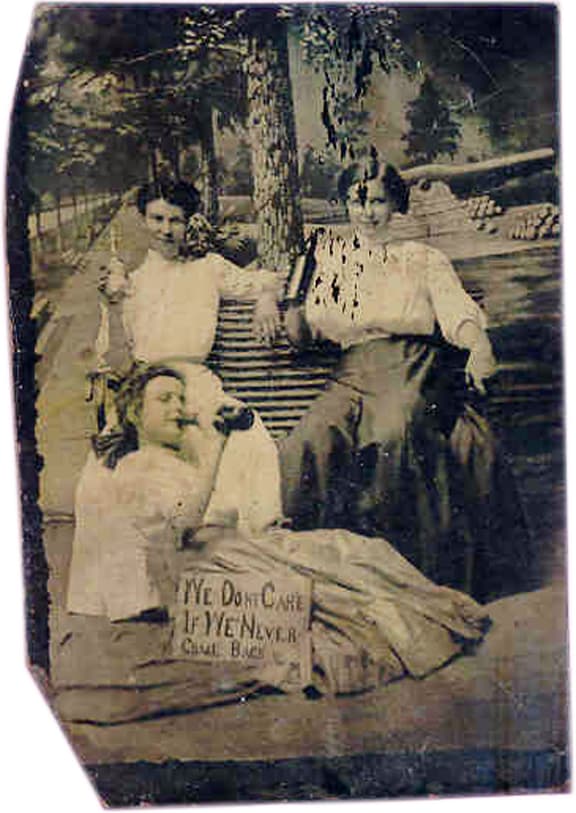 Ferdinand Meyer V is a native of Baltimore, Maryland and has a BFA in Fine Art and Graphic Design from the Kansas City Art Institute and School of Design. Ferdinand is the founding Principal of FMG Design, a nationally recognized design consultation firm. Ferdinand is a passionate collector of American historical glass specializing in bitters bottles, color runs and related classic figural bottles. He is married to Elizabeth Jane Meyer and lives in Houston, Texas with their daughter and three wonderful grandchildren. The Meyers are also very involved in Quarter Horses, antiques and early United States postage stamps. Ferdinand is the past 6-year President of the Federation of Historical Bottle Collectors and is one of the founding members of the FOHBC Virtual Museum.
View all posts by Ferdinand Meyer V →
This entry was posted in Breweriana, Civil War, Fruit Jars, Photography, Spirits, Tobacco, Whiskey, Wine & Champagne and tagged bootleg, Civil War, Confederate, Dennis Fox, Dennis Humphrey, Drinking, Jeff Wichmann, photograph, Prohibition, soldiers, Sutler, tent, Union, Whiskey, whisky. Bookmark the permalink.