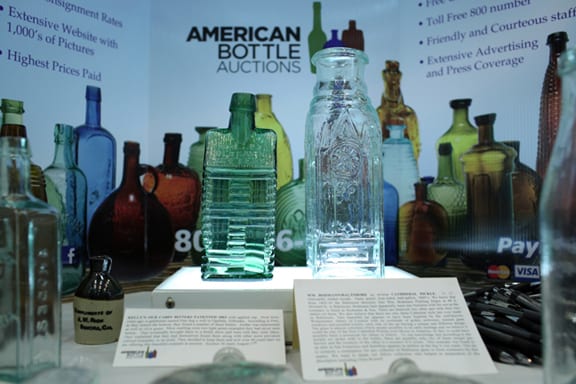 Jeff Wichmann over at American Bottle Auctions in Sacramento, California, has an exciting auction online as I write. This is Auction #56 that closes on 26 August 2012. Besides the spectacular Kelly’s Old Cabin Bitters (see above), and the Cropper’s Stomach Bitters (Read: Unlisted Dr. Cropper’s Bitters spotted at ABA table at Reno Expo) there is a killer cathedral pickle that caught me completely by surprise. Sitting near the later auction lots is the WM BODMANN BALTIMORE cathedral pickle. I saw this beauty in Reno recently but was dazzled by the Kelly’s. The cathedral pickle is noted as being found in an attic in San Francisco. The ABA pictures and write-up is as follows:

Originally an exhaustive search for information on this pickle yielded little as to Bodmann or his pickling business itself. Since then, we’ve obtained some information on Bodmann and his business. We know that from 1842-45 the Baltimore directory lists Wm. Bodmann Pickling Depot at 48 S. Howard St. in Baltimore. Bodmann later apparently went into business with his son as the company is listed as Bodmann & Son.

There are believed two other jars with their two names on them. We also believe that there are only three Cathedral style jars ever made in Baltimore. This beautiful jar appears to have been inspired by the well-known Westminster Abbey of London with its multitude of Gothic archways, stained glass windows and pointed towers, each side of the jar having a unique and different design. The glass is almost colorless which speaks possibly to its early heritage and we believe it could be one of the first Cathedral Pickles ever blown in America. In fact, it could have possibly been a prototype for others to follow. To our knowledge and according to the people we spoke with in the hobby, there are only two other of these unique jars known to exist and they both have damage

This example was found in an attic in San Francisco and therefore appears as perfect as the day it was made. No flaws of any kind, just loads of diamond-like faucets combined with a multitude of whittle and tiny bubbles creating quite a shown when viewed under light. This jar is certainly a centerpiece for any collector of Baltimore glass or food containers for that matter. Possibly the only quart plus sized cathedral pickles with a name and city embossed. We want to thank our fellow collectors who helped in preparation of this description. Grades a 9.9.

What I find fascinating is how this early Baltimore pickle jar was found in San Francisco in an attic? I started looking online and quickly found a number of supporting documents including city directories with Bodmann’s address in Baltimore as Wichmann notes. I also found a tidbit from a cookbook referencing a William Bodemann (note spelling difference) who must be the same (see below). 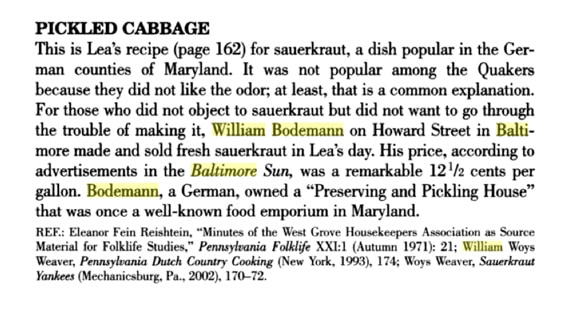 Reference to William Bodemann in A Quaker’s Woman’s Cookbook

Further research online led me to a publication from The Society of Historical Archaeology titled The Hoff Store Site and Gold Rush Merchandise in San Francisco, California (see cover below). Did this store have any of the Bodmann pickles for sale? Checking the Table of Contents, I  see an entire section by Dennis P. McDougall called The Bottles of the Hoff Store Site.

Reading further, I found out that the Hoff Store collapsed into San Francisco Bay during the conflagration of May 3rd and 4th, 1851. Hundreds of glass bottles containing preserved food, alcoholic beverages, medicines, toiletries, and various other contents for retail purchase were deposited onto the muddy floor of the Bay. The waters and sediments of the Bay, combined with the landfill from expansion of San Francisco’s shoreline in the years following the fire, “sealed” these glass containers. As a result, many still retained their original contents. 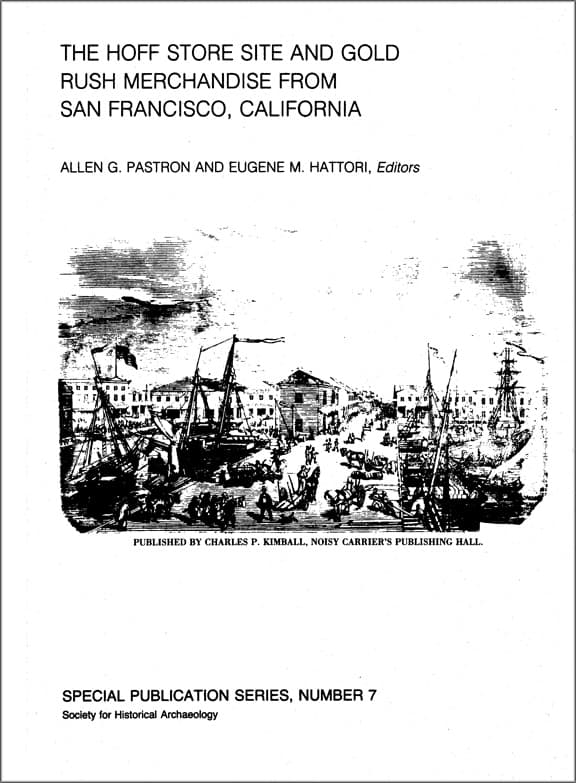 The Society of Historical Archaeology book on The Huff Store Site and Gold Rush Merchandise from San Francisco, California.

The article references the many types of bottles and shard specimens that were found including WELLS, MILLER & PROVOST, NEW YORK (read more: Blue Wells Miller & Provost & blue cathedral pepper sauce question?) and UNDERWOOD & CO., BOSTON. I feel like I am getting closer. Finally, nearing the end of the chapter, I find the information I am looking for in the Culinary section. Yes. the Wm Bodmann’s from Baltimore were sitting on the shelves when the store collapsed into the bay (see below). So it looks like the Bodmann pickle jars followed the Gold Rush miners and families to California and sat within the Hoff General Store until the terrible fire. One can only think that this Baltimore cathedral pickle for sale in the current auction may have been purchased in the days before the fire or maybe they were safely stowed on the ships waiting to be unloaded, if they escaped the fire. Read: The Bottles of the Hoff Store Site 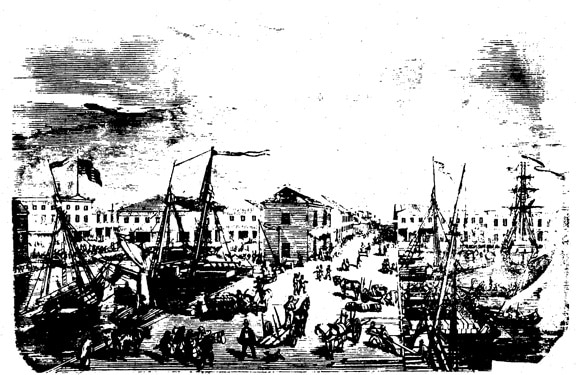 “Recessed shoulder panels suggest these bottles were Cathedral-styled. A bulbous ring separated the shoulder from the cylindrical neck” 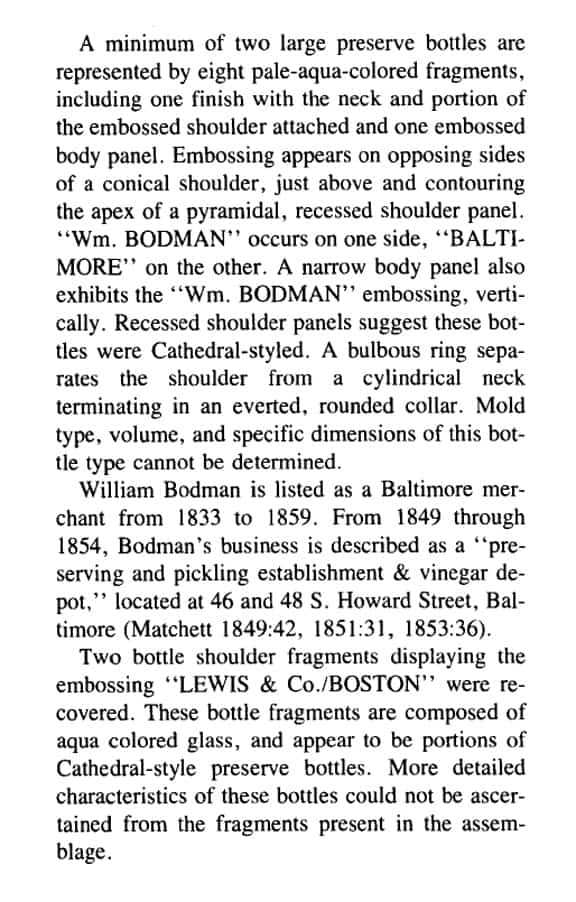 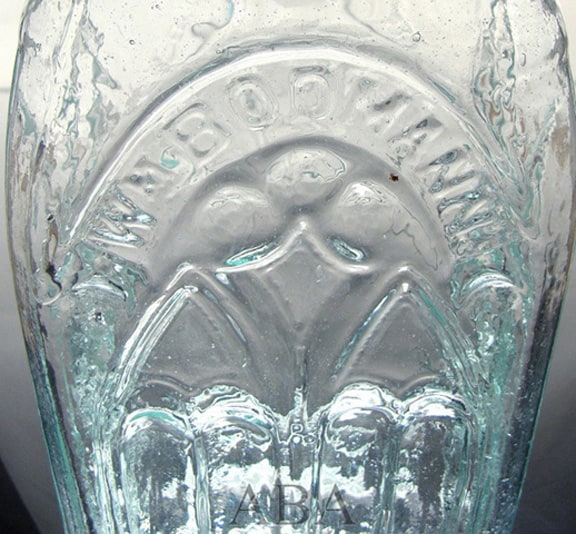 Ferdinand Meyer V is a native of Baltimore, Maryland and has a BFA in Fine Art and Graphic Design from the Kansas City Art Institute and School of Design. Ferdinand is the founding Principal of FMG Design, a nationally recognized design consultation firm. Ferdinand is a passionate collector of American historical glass specializing in bitters bottles, color runs and related classic figural bottles. He is married to Elizabeth Jane Meyer and lives in Houston, Texas with their daughter and three wonderful grandchildren. The Meyers are also very involved in Quarter Horses, antiques and early United States postage stamps. Ferdinand is the past 6-year President of the Federation of Historical Bottle Collectors and is one of the founding members of the FOHBC Virtual Museum.
View all posts by Ferdinand Meyer V →
This entry was posted in Article Publications, Auction News, Digging and Finding, Early American Glass, Figural Bottles, History, Museums, News, Pickle Jars, Publications and tagged American Bottle Auctions, Baltomore, california, Cathedral, fire, Gold Rush, Hoffs Store, Jeff Wichmann, Pickle, San Francisco, William Bodmann. Bookmark the permalink.