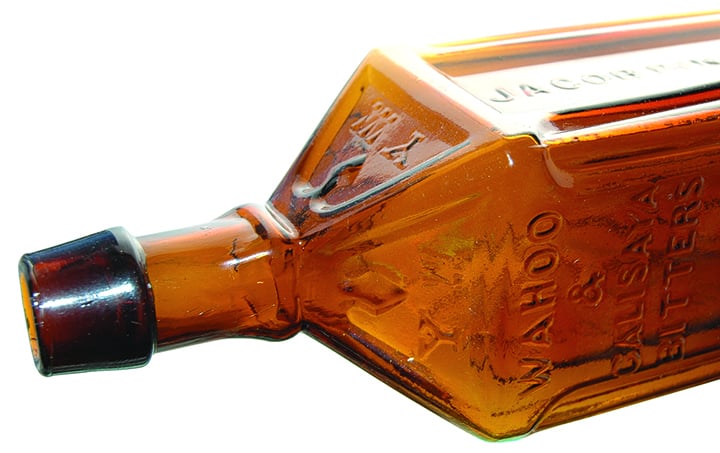 Have you ever used the celebrated Wahoo and Calisaya Bitters better known by the cabalistic letters “I.M. O. K. — 1864– Y!  Y!” This phrase is repeated in various period advertising and is quite interesting. This post was inspired by Frank Wicker who sent me an email stating:

“Hi Ferdinand. I have a question about one of the bottles I won from American Bottle Auctions. It is lot 98, Jacob Pinkerton’s Wahoo & Calisaya Bitters. Jeff says it has a tooled top. The Ring and Ham Bitters Bottles books only list an applied top. I was wondering if it is an unlisted variant? I was also wanting to know if your examples have applied or have a tooled top? I am checking with Lou Holis also, as he has an example. Thanks, Frank”

Frank, my example has an applied mouth. It seems that Jacob Pinkerton in Syracuse, New York, first announced his Pinkerton’s Wahoo & Calisaya Bitters in 1864. Prior to this date he was running an ale depot, bowling saloon and liquor establishment. His business was called Jacob Pinkerton & Company. He was selling just about everything with alcohol along with cigars and a few other vices. 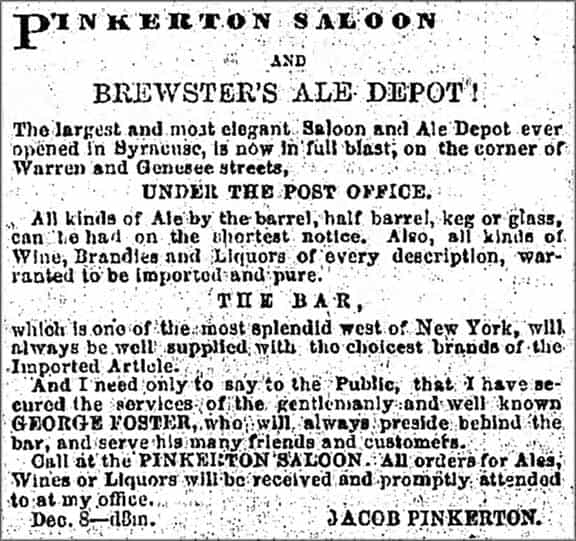 His Wahoo & Calisaya Bitters contained twenty different barks and roots and a lot of pure old bourbon whiskey. He sold it from his liquor store and saloon noted above. He also marketed the brand extensively in the northeast and south. This would obviously be the applied top variant. Pinkerton would then take some years off, visit South America and then work as a soap manufacturer. He was also an alderman, worked for a brass foundry, a railroad company, ran a billiard parlor and then reappear again as a liquor merchant in the late 1880s. I suspect he kept his bottle mold and again sold his most famous product, this time with a tooled top. It is odd though, as there is no mention of these bitters after 1867. 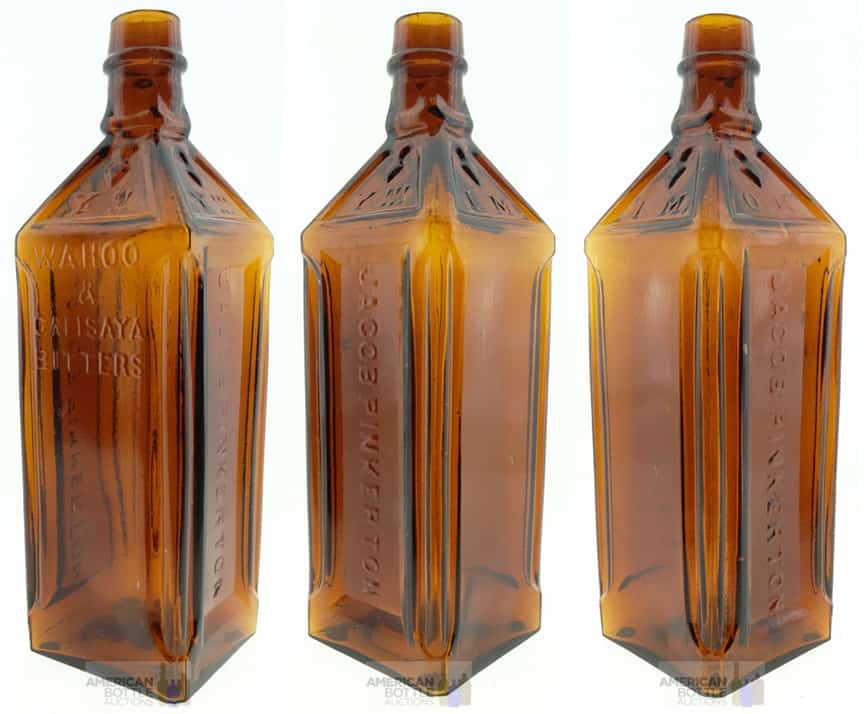 JACOB PINKERTON WAHOO & CALISIYA BITTERS. With tooled top, it is listed as W-3. Here’s a very popular bitters with a myriad of initials and various interesting mold characteristics. There are initials including “OK” around the shoulder with a series of arrows, really just a little bit of everything. Although these do come with applied tops, this one appears to be tooled. This is possibly one of the later examples made since Pinkerton started his business as early as 1852, he owned a liquor store in 1859 and began to advertise this product in 1864. There is no mention of these bitters after 1867, very strange. Grades a 9.5 – American Bottle Auctions 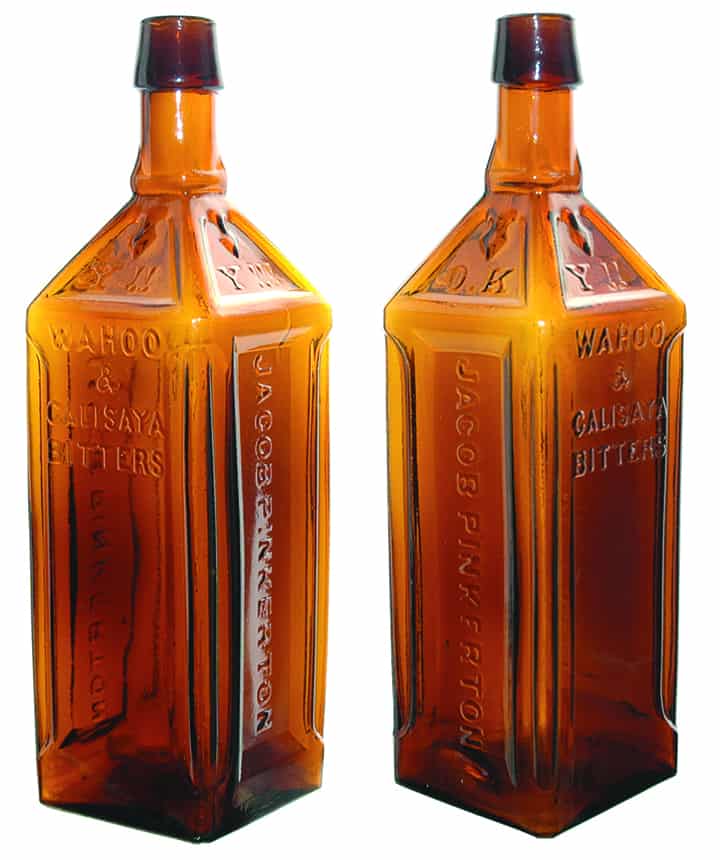 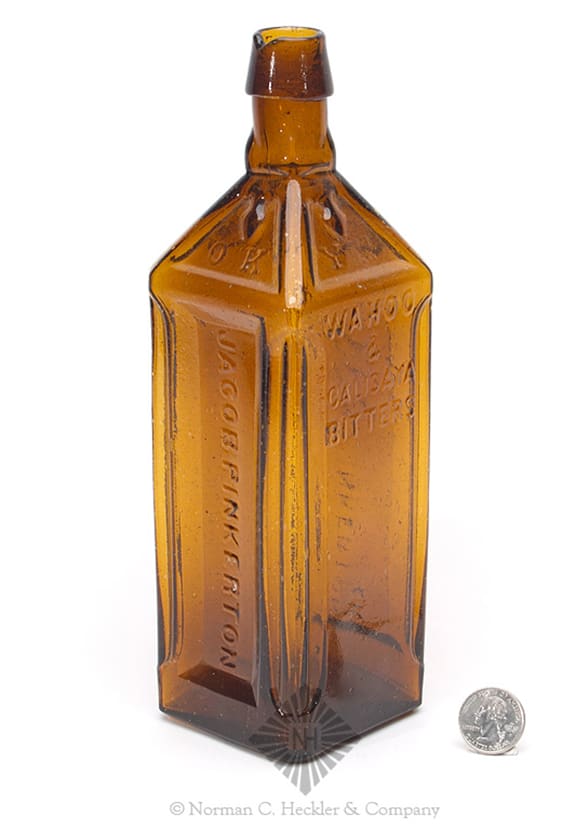 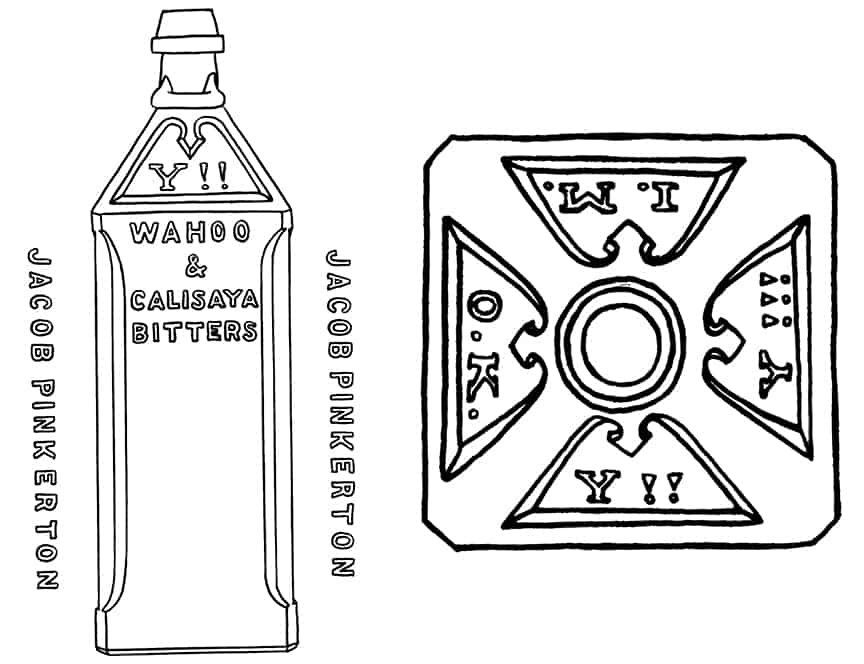 Label: I.M. O.K. 1864 Y!! Y!!! Try me and I’ll do you good. They contain the active principles of both the Wahoo and Calisaya besides some 20 different barks and roots in pure old bourbon whiskey distilled in Bourbon Creek, Kentucky in 1852.

I can find advertising for Pinkerton’s Wahoo and Calisaya Bitters in many newspapers including the Syracuse Daily Courier And Union and Pittsburgh Gazette from February 1864 to February 1865. 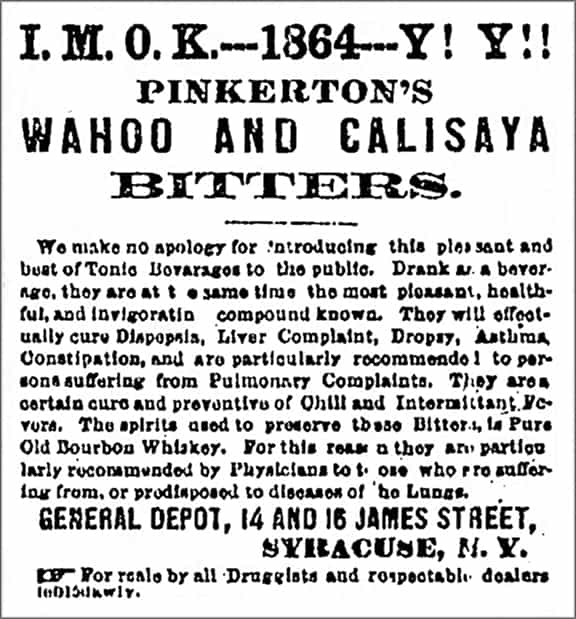 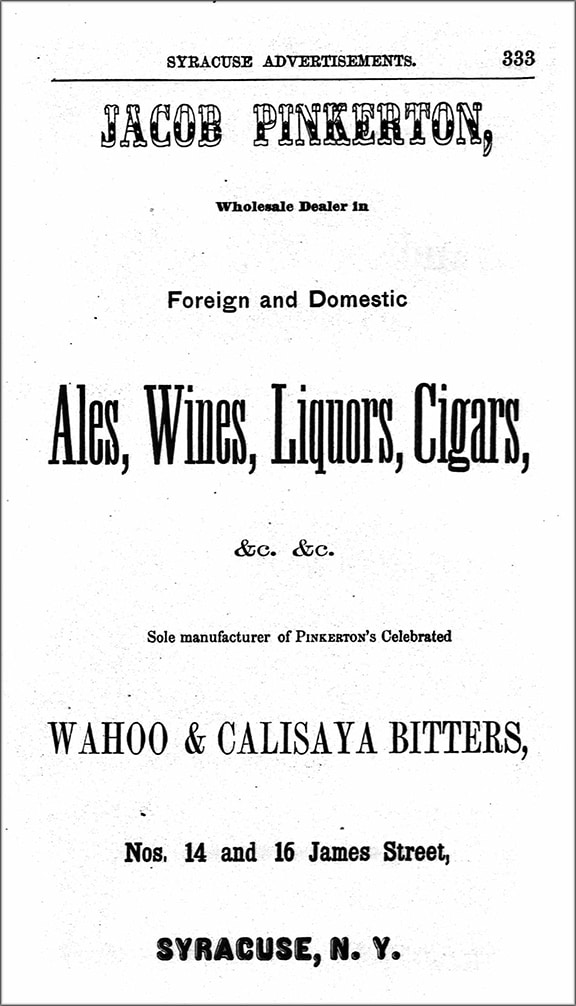 As I mentioned above, I can find advertisements throughout the northeast and south where various merchants were representing the Wahoo & Calisaya Bitters. 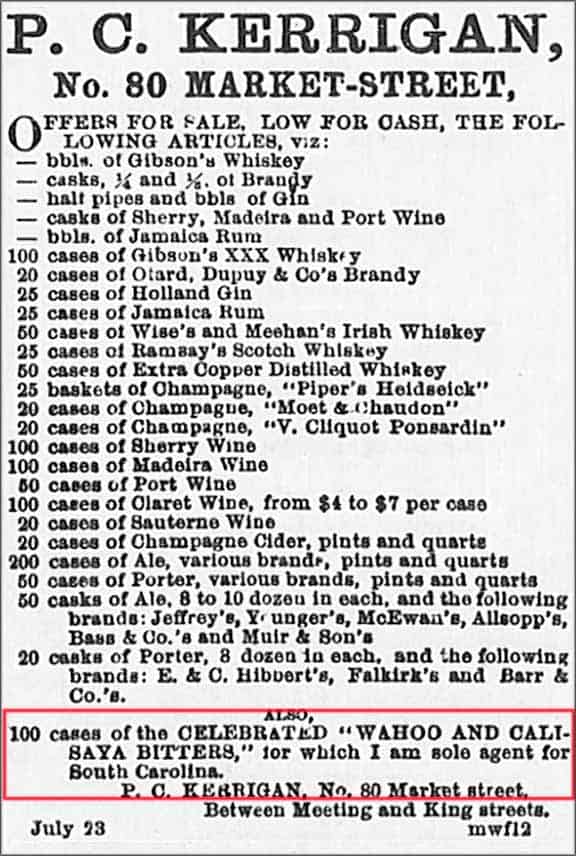 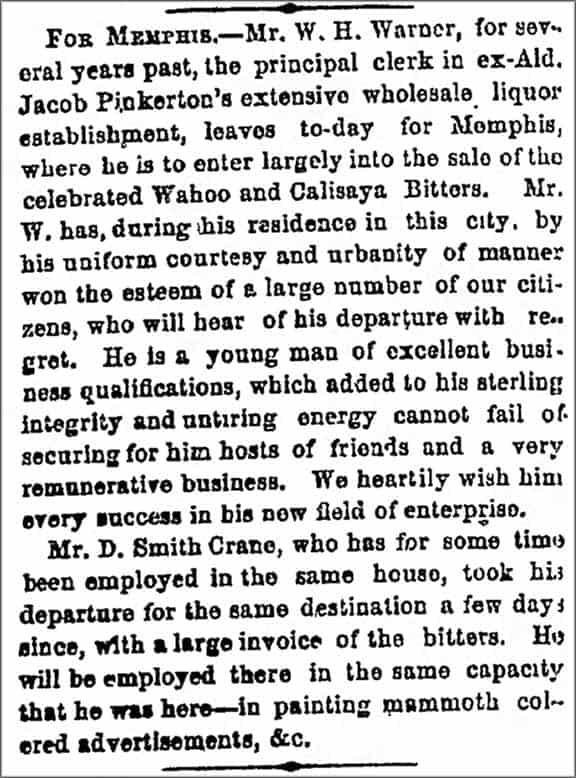 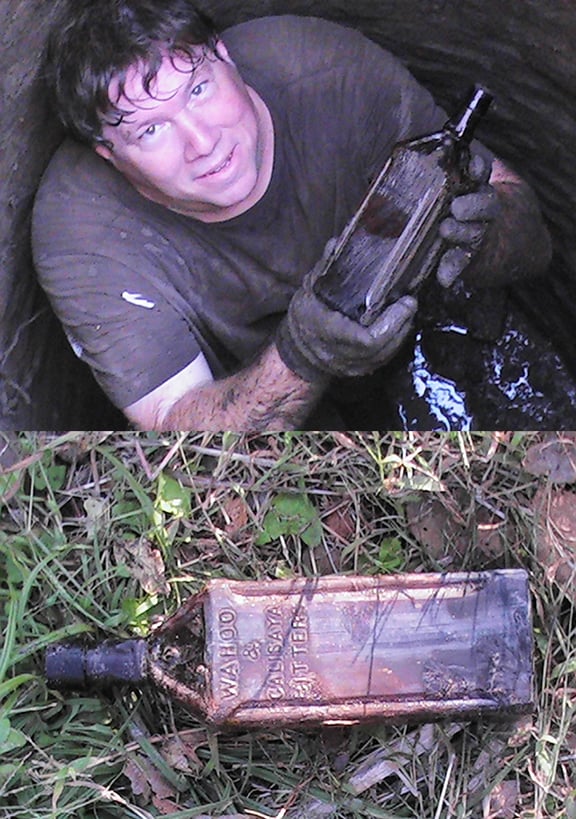 Gary Beatty, FOHBC Treasurer, was even the FOHBC Best Author and won First Place in 2014 with the Best Fictional Story “Case of the Missing Case” published in the Swirl and BOTTLES and EXTRAS. Read Here. He used my example on the second page. Become a FOHBC member and get BOTTLES and EXTRAS. 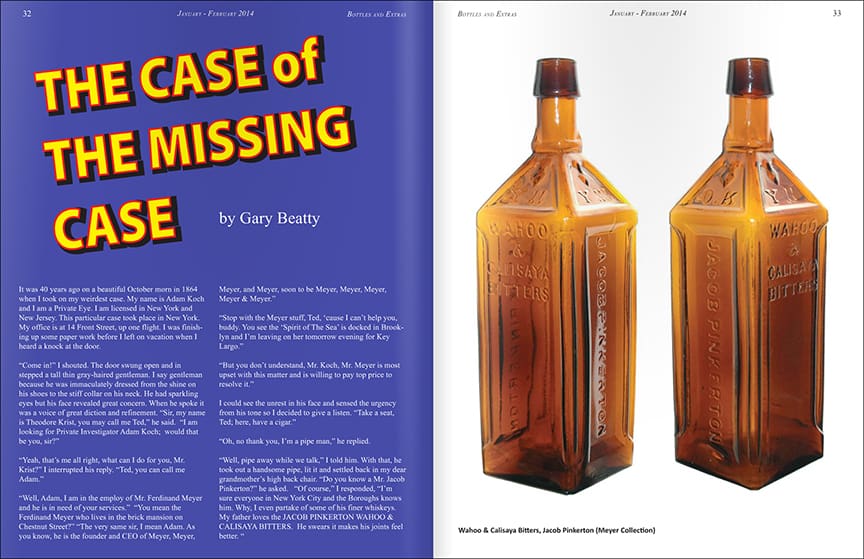 1859: Passage: Towards the close of the year the community was congratulated on the excellent business outlook, the building of the First Baptist church, a new block on the site of the old Yellow Buildings, and a new building on the site of the old “Conical Mills” by ex-Mayor Stevens, all of which sites had been recently burned over; a new brewery by Jacob Pinkerton on Fayette street; the engine hook and ladder house rear the City Hall. Preparations were made for the erection of the Kirk block, which was soon finished, and for other structures. – Memorial History of Syracuse New York 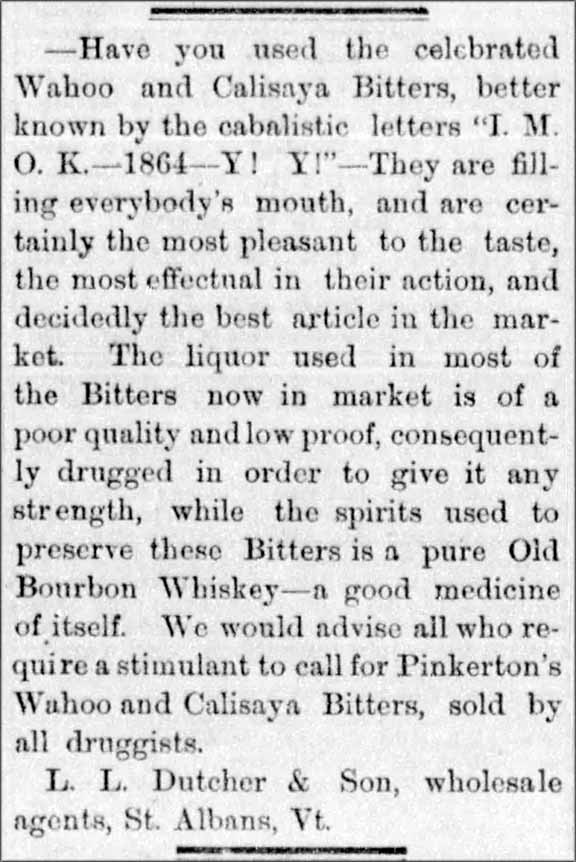 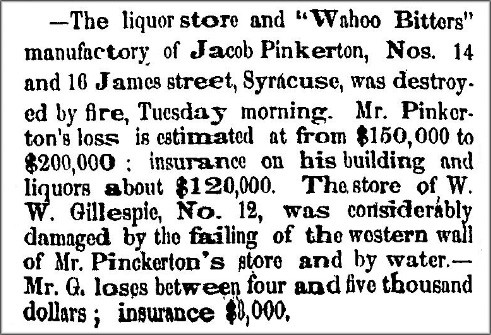 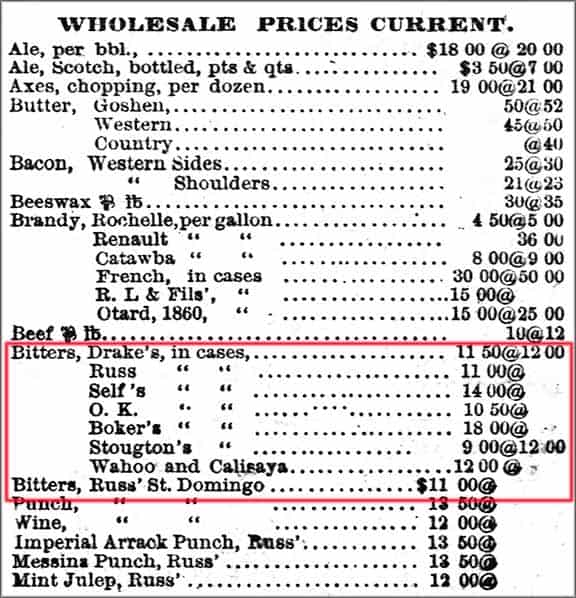 1868: S1,748.- ALONZO B. CALDWELL, Syracuse, N. Y., assignor to himself and JACOB PINKERTON, same place. – Journal Box – September 1, 1868. – Hooks and shoulders, constituting part of the bronze metal frame, hold the cast-iron shell which is cast around the frame; the latter is provided with arms which have flanges across their ends which ‘port the soft metal and prevent it from being crushed. etc… – Annual Report of the Commissioner of Patents, 1870 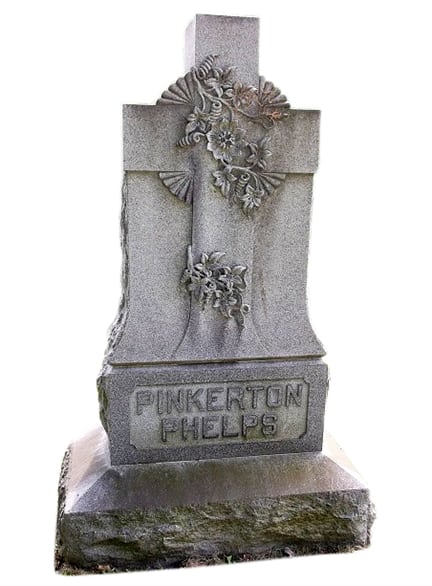