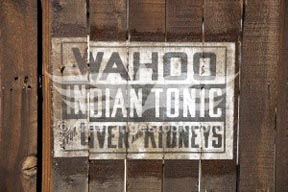 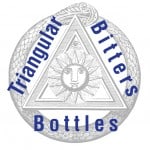 I have a smaller, extremely rare triangular bitters called the Wahoo Chamomile Bitters which reminds me of other more well known bitters with similar names such as the Jacob Pinkerton Wahoo & Calisaya Bitters and of course the popular E. Dexter Loveridge’s Wahoo Bitters (I love that name!…not just Dexter but E. Dexter Loveridge).

“The old double entendre with the word Wahoo”

I wish I could tell you more about the Wahoo Chamomile. There is little to no available information in the Carlyn Ring and Bill Ham Bitters Bottles or the Bitters Bottle Supplement or other earlier books. What I did spend a little time doing was researching the Chamomile and Wahoo plants. Whenever I do see the Wahoo wording in a Bitters name I suspect there is also an indian reference. The old double entendre with the word Wahoo. I also did not releazie that Chief Wahoo was the Cleveland Indians mascot. If you have any more information on the Wahoo Chamomile, please let me know. Don’t even know where it is from though I suspect the Northeast. Haven’t seen a label or advertisement either. Odd. This is why I love bottle collecting. 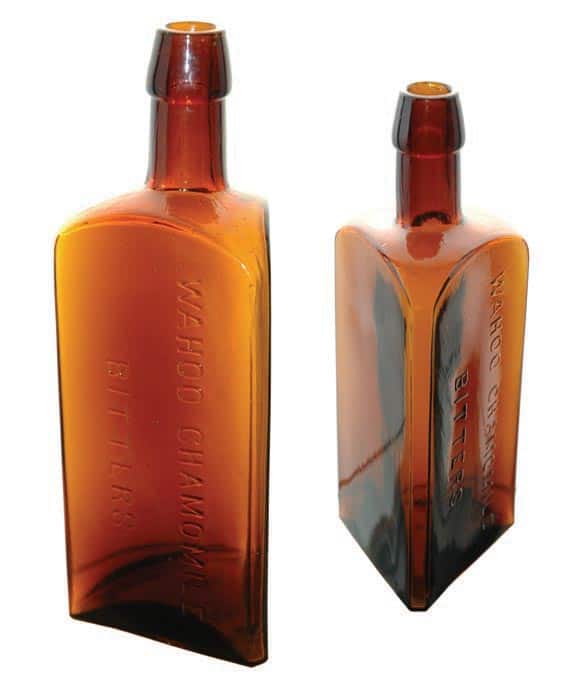 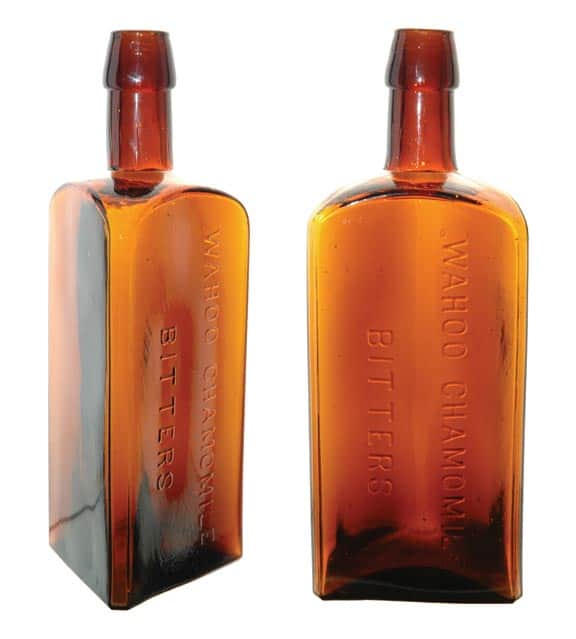 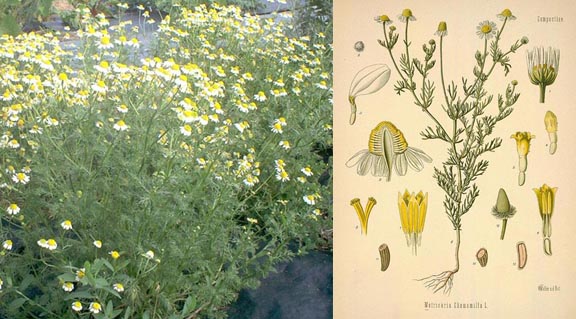 Bitter chamomile, also known as German chamomile, is an erect, aromatic, annual herb with thread like leaves. Terminal flower heads are about 2.5 cm across, on slender branched stalks, bearing an outer whorl of 10 to 20 white flowers with a yellow centre. The flowers of the plant constitute the drug chamomile.

Bitter chamomile flowers contain many medicinal virtues. They relieve flatulence, induce copious perspiration and regulate menstrual periods. They are also stimulant and useful in dissolving or absorbing a tumour or any coagulated fluids in the body.

Digestive Disorders: Chamomile is an effective remedy for digestive disorders, specially of nervous origin. It can be used beneficially in dyspepsia, flatulence and colic. A powder of the flowers or I to 3 drops of oil extracted from flowers is taken in I to 2 gram doses in the treatment of such disorders. A cold infusion of the flowers is useful in indigestion and summer diarrhea in doses of 30 to 60 grams.

Insomnia: Chamomile is useful in insomnia. An infusion of its flowers induces sleep.

Women’s Diseases: A warm infusion of the flowers is taken in the treatment of painful and difficult menstruation.

Children’s Problems: An infusion of the flowers has a relaxing effect and is of special value to hyperactive children. It acts as a nervine sedative and tonic on the gastrointestinal canal. The flowers are useful for earache, neuralgic pains, stomach disorders, convulsions and ailments caused by dentition.

Skin Diseases: Two of the components, bisabolol and chamazulene contained in the volatile oil of the herb are powerful antiseptics. Chamazulene relieves pain, promotes healing of wounds and is anti-inflammatory and anti-spasmodic. Applied externally, it helps recovery from burns and soothes eczema. Recent investigations show that bisabolol speeds up healing of ulcers and prevents reoccurrence.

Rheumatism: Chamomile is also useful in treating rheumatic afflictions, where its extracted oil, diluted in a vegetable oil is, rubbed on the affected parts. It eases the pain of rheumatism and gout. A compress of chamomile flowers is used to treat sciatica.

The medicinal parts are the trunk and root bark and the fruit. The flowers are yellowish-green, small and flat in double cymes with few blossoms. There are 4 sepals, 4 petals, 4 stamens and 4 styles on a glandular disc, which surrounds the ovary. The fruit is a 4-lobed, obtuse, pink capsule which bursts open at the tip showing the seeds covered in an orange-yellow skin. The seeds are poisonous.

The plant grows in the Eastern and Central U.S. and Canada. Wahoo root bark is the bark of the root and young branches of Euonymus atropurpureus. Wahoo fruit is the fruit of Euonymus europaeus. Other names are Burning Bush, Fusanum, Fusoria, Gadrose, Gatten, Gatter, Indian Arrowroot, Pigwood, Prickwood, Skewerwood, and Spindle Tree. Wahoo Root Bark and Fruit is reported to be a laxative and a choleretic. Larger doses have an effect on the heart. 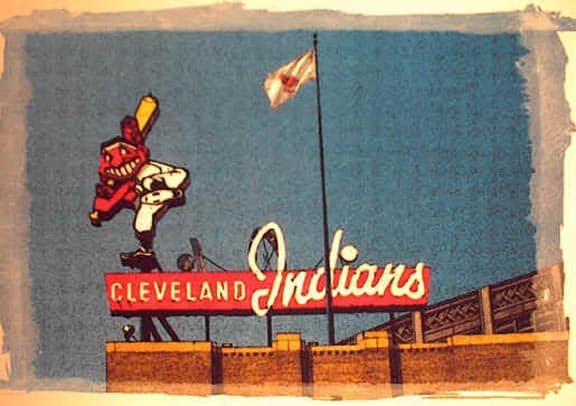 Wahoo” is derived from a Dakotan Indian word. There are also historical references to “Wahoo Indians.” Whether this was an actual tribe, a nickname for a tribe, or a nickname for Indians in general is unclear. Chief Wahoo is a trademarked logo for the Cleveland Indians baseball team. The illustration is a Native American cartoon caricature. My wife Eliza used to plat the Wahoo Indian board game as a child. 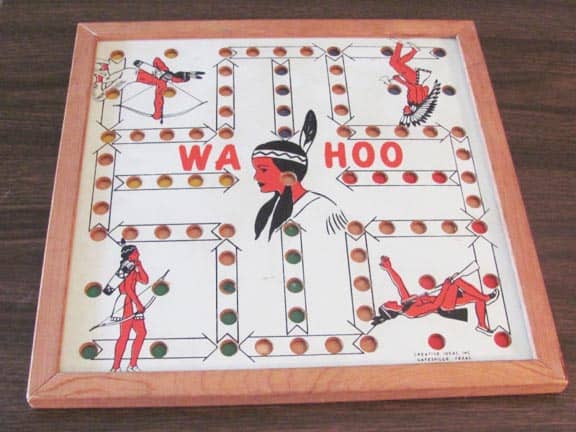 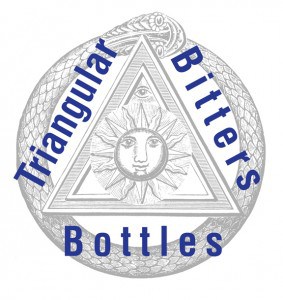 Ferdinand Meyer V is a native of Baltimore, Maryland and has a BFA in Fine Art and Graphic Design from the Kansas City Art Institute and School of Design. Ferdinand is the founding Principal of FMG Design, a nationally recognized design consultation firm. Ferdinand is a passionate collector of American historical glass specializing in bitters bottles, color runs and related classic figural bottles. He is married to Elizabeth Jane Meyer and lives in Houston, Texas with their daughter and three wonderful grandchildren. The Meyers are also very involved in Quarter Horses, antiques and early United States postage stamps. Ferdinand is the past 6-year President of the Federation of Historical Bottle Collectors and is one of the founding members of the FOHBC Virtual Museum.
View all posts by Ferdinand Meyer V →
This entry was posted in Bitters, Collectors & Collections, History, Medicines & Cures and tagged bitters, Chamomile, Cleveland Indians, Indian, Meyer Collection, Wahoo. Bookmark the permalink.