A purely mineral and vegetable compound free from all mineral poison, also free from all poisonous drugs as morphine, heroin, opium, cocaine, nux vomica or strychnine.

Perusing the trade cards on ebay, I see a nice example of a C. K. Wilson’s Original Compound Wa-Hoo Bitters trade card (posted further below) that reminds me of my labeled bottle. Charles Kent Wilson and his Old Indian Medicine Co. in Toledo, Ohio produced the bitters and was eventually sued by the government for misbranding his product. Not a terribly exciting bottle to many but just another reason why it is fun to be a bitters collector. So many stories and neat pieces of history. 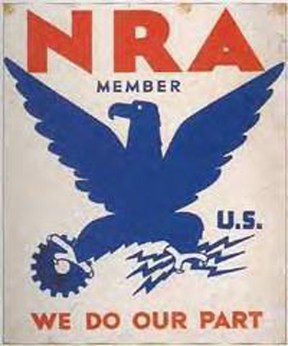 Pay close attention and look at the upper left corner of the front label on my example. There you will see the NRA Blue Eagle logo (printed in black). This would be displayed in store windows, placed on packages and labels, and included in advertising. The National Recovery Administration (NRA) was the primary New Deal agency established by U.S. president Franklin D. Roosevelt in 1933. The goal was to eliminate “cut-throat competition” by bringing industry, labor and government together to create codes of “fair practices” and set prices.

The example further below from the Glass Works Auctions does not have this logo. There are also other subtle differences in the two labels. 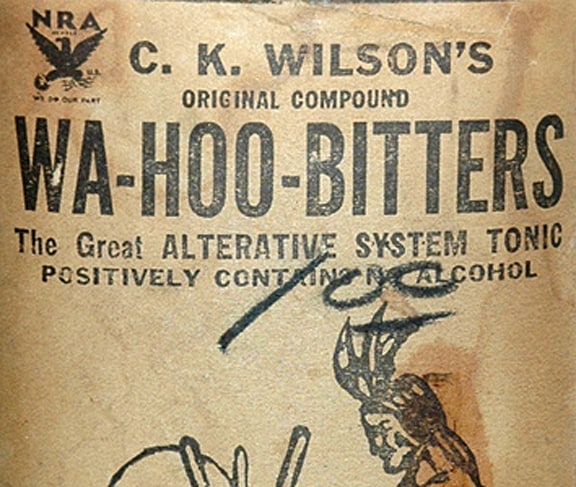 Label: We guarantee Wahoo Bitters to be just as we represent it. A purely mineral and vegetable compound free from all mineral poison, also free from all poisonous drugs as morphine, heroin, opium, cocaine, nux vomica or strychnine. A thorough trial will convince you as to its great value. Animals know by instinct to eat certain plants when needs demand. The caveman knew the value of roots and herbs. Indians resorted to them when emergency called. Our grandparents followed similar methods. God causeth the herb to grow for the service of man Psalm 104-14. 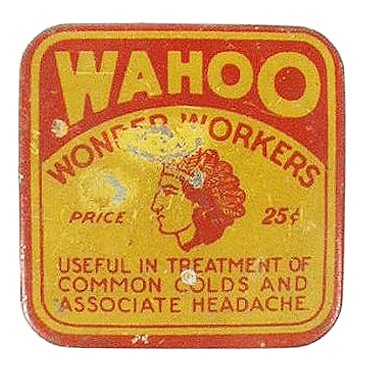 Note: U.S. Government in Judgement No. 4523, February 1917, charged it was “a watery solution with sweetening, epsom salts, sassafras, and prickly ash.” The fine was $25 plus costs. The company claimed it “A great blood and nerve tonic and an unfailing specific for partial paralysis, St. Vitus’ Dance and all forms of weakness, as well as an effective remedy for malaria, catarrh of the stomach, salt rheum, scrofula and neuralgia.” 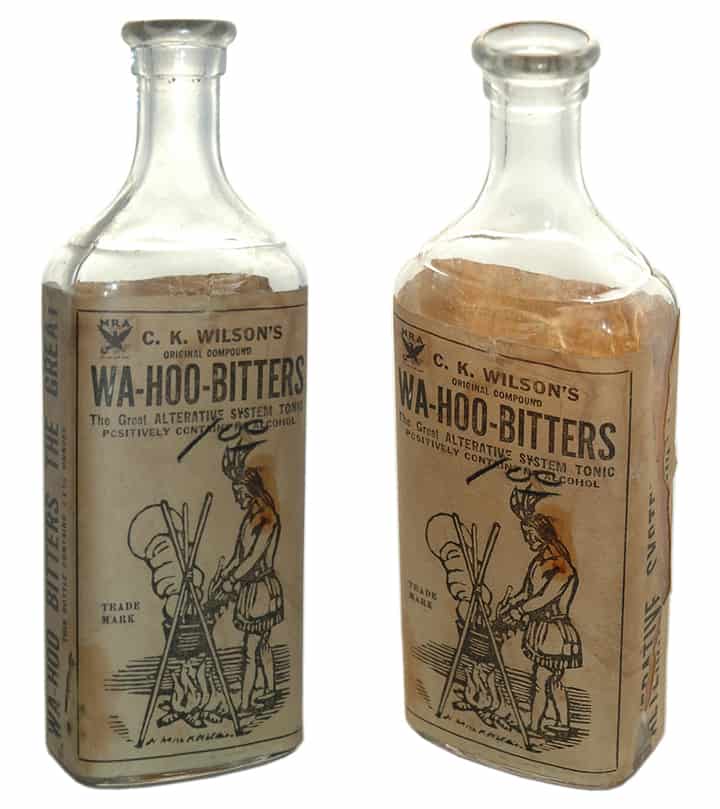 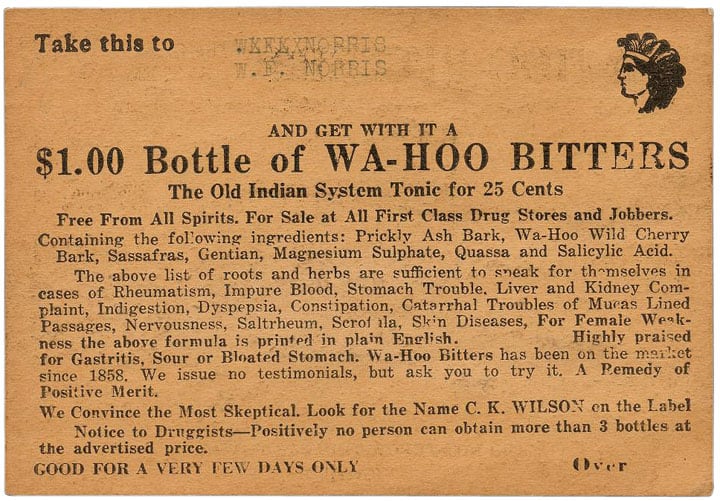 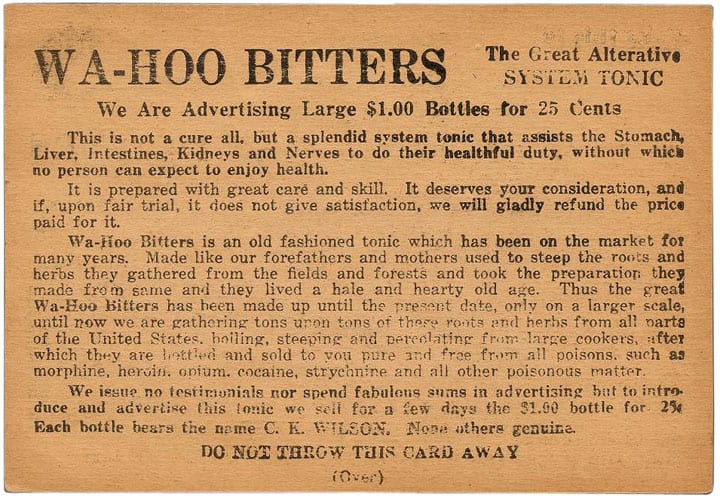 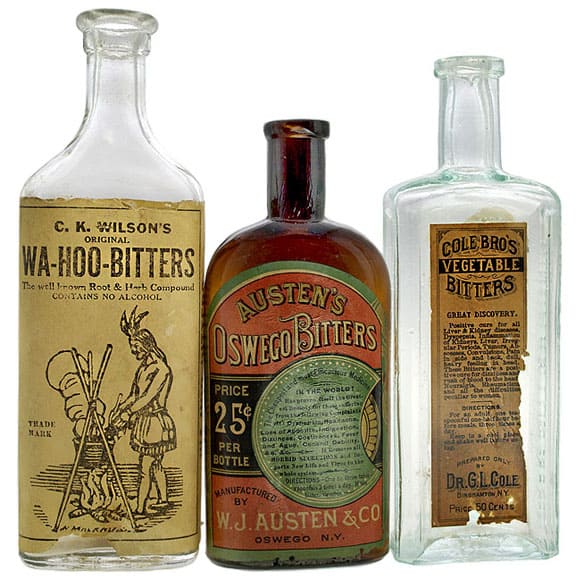 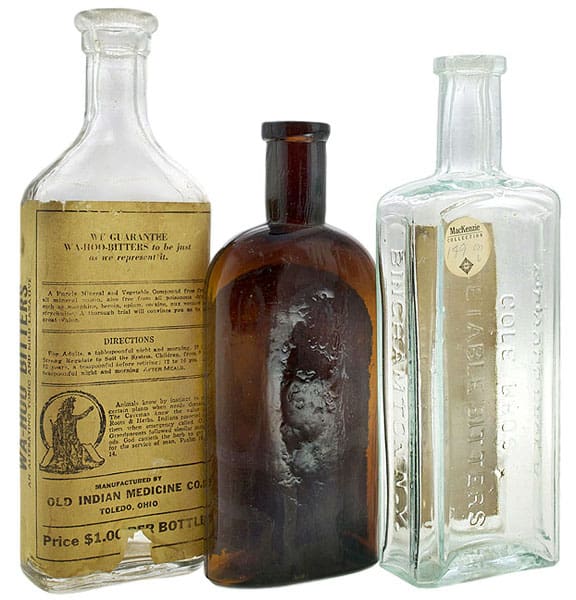 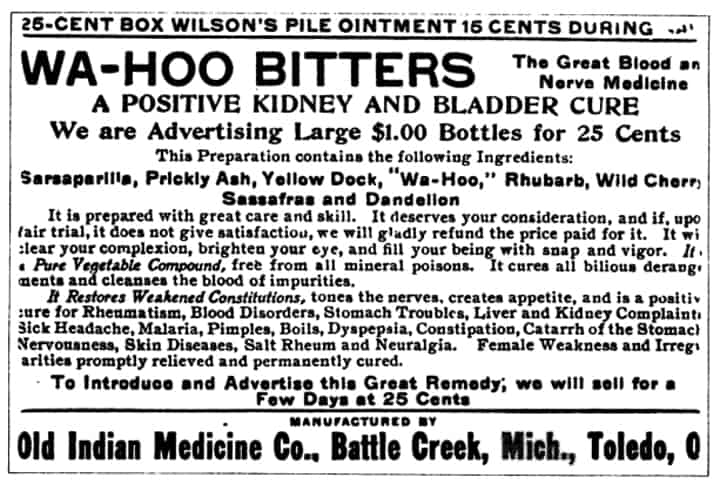 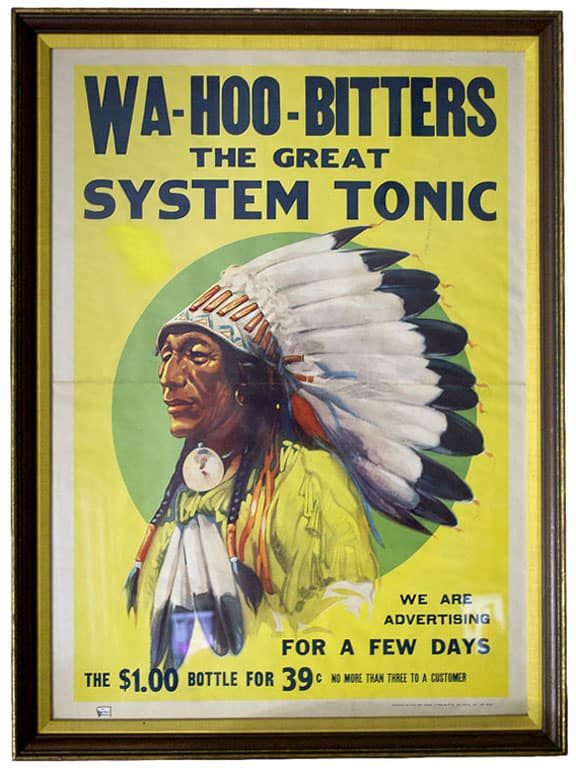 Framed Paper Bitters Advertisement, American, ca. 1880 – 1900, for ‘Wa-Hoo-Bitters The Great System Tonic We Are Advertising For a Few Days The $1.00 Bottle For 39 cents No More Than Three to a Customer’, and showing an Indian Chief in full Headdress. The wood frame measures, 30 1/4”h, by 22 1/4” wide. Printed by the ‘Erie Litho Co’.
Extremely rare, possibly unique, and having brilliant colors. Ex. Carlyn Ring Collection. – Glass Works Auctions

Ferdinand Meyer V is a native of Baltimore, Maryland and has a BFA in Fine Art and Graphic Design from the Kansas City Art Institute and School of Design. Ferdinand is the founding Principal of FMG Design, a nationally recognized design consultation firm. Ferdinand is a passionate collector of American historical glass specializing in bitters bottles, color runs and related classic figural bottles. He is married to Elizabeth Jane Meyer and lives in Houston, Texas with their daughter and three wonderful grandchildren. The Meyers are also very involved in Quarter Horses, antiques and early United States postage stamps. Ferdinand is the past 6-year President of the Federation of Historical Bottle Collectors and is one of the founding members of the FOHBC Virtual Museum.
View all posts by Ferdinand Meyer V →
This entry was posted in Bitters, History, Medicines & Cures, Trade Cards and tagged bitters, C. K. Wilson, Charles Kent Wilson, Indian, ohio, Toledo, Wa-Hoo. Bookmark the permalink.