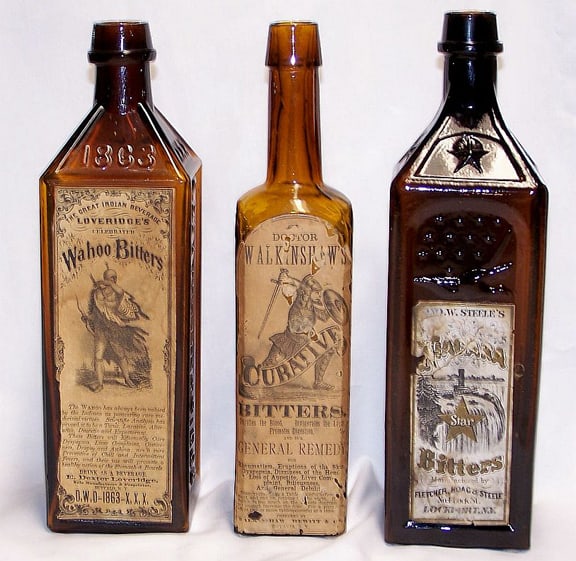 “Drink as a Beverage” 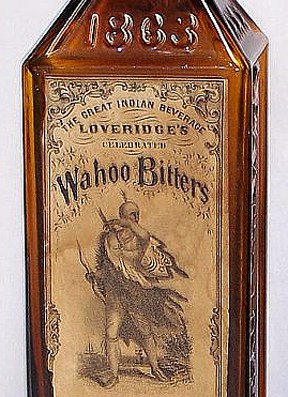 The Jack Stecher post of the three labeled upstate New York Bitters bottles (Read: Some of Jacks labeled Upstate New York Bitters) on Peachridge Glass recently prompted me to go back and look at further information for each bottle in the picture. In this post we will specifically be looking at the great semi-cabin form for the E. Dexter Loveridge Wahoo Bitters which is one of my favorites!

This is a wonderful bottle from Buffalo, New York, that unlike the Dr. Walkinshaw’s Curative Bitters or Steele’s Niagara Star Bitters, which come in primarily amber, comes in some drop-dead gorgeous colors as you will see in some of the pictures below.

I thought it is also interesting that a piano sectional was written call The Wahoo Polka (see below). 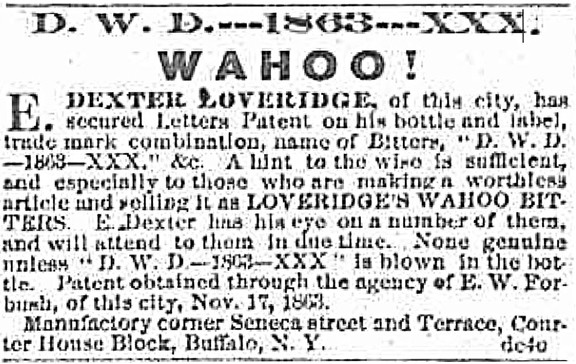 Some brief family information references that Dr. Loveridge was married to Susannah Bodine Pierson (daughter of Paul Pierson and Temperance Woodruff from Buffalo, N.Y.) and had a daughter Mary (or May) Louisa Loveridge who married Judge Lawrence Woodruff Halsey, Jr from Milwaukee, Wisconsin. They had a daughter named Louisa Ketcham Halsey.

“He gets all the glass they can furnish him from Lockport and Clyde, N.Y., and for the balance he sends to Pittsburgh” 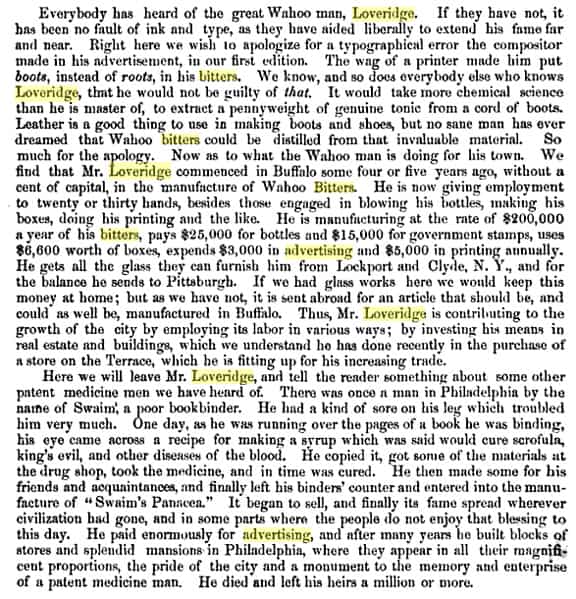 Lots of great information in this passage from The Manufacturing Interests of the City of Buffalo: Including Sketches of the History of Buffalo – 1866

Buffalo, NY- Loveridge Wahoo Bitters $100 Advertising Note 1863. This is a rare advertising note. Mr. Loveridge proclaims that his Wahoo Bitters may be drank as a beverage or taken as a medicine. – Heritage Auctions 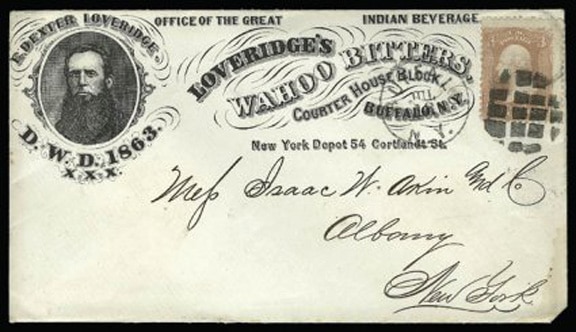 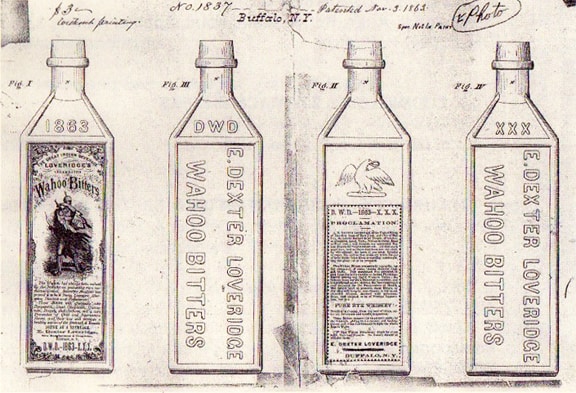 Label: The Wahoo Bitters are entirely vegetable being composed of more than twenty different roots and barks. The compound was procured in part from the most eminent Indian physicians known among our northwestern tribes; the balance from my own botanical research and is a profound secret, making the best compound ever invented for the preservation of health. 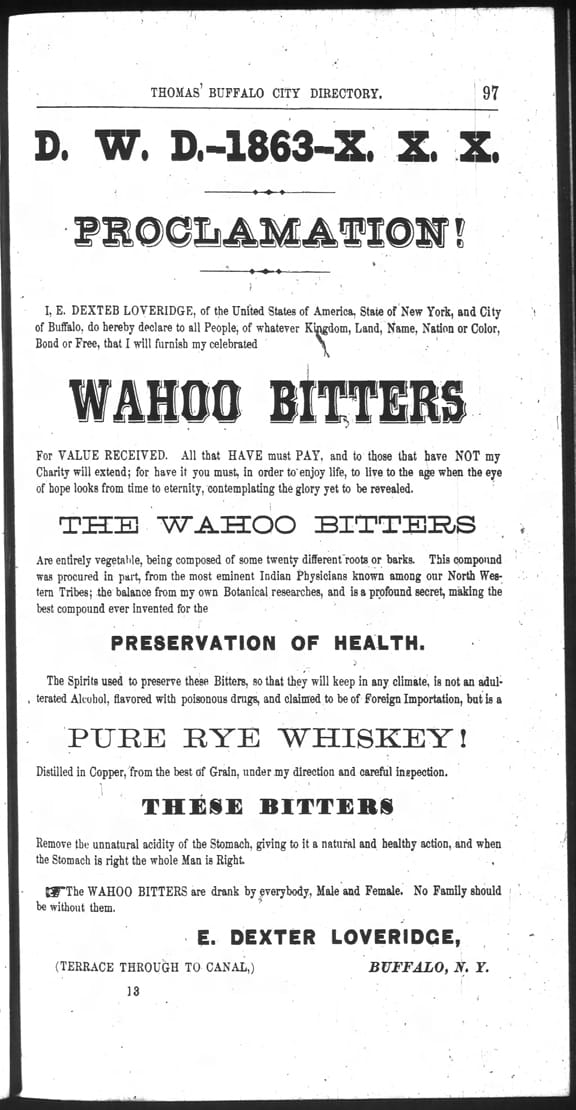 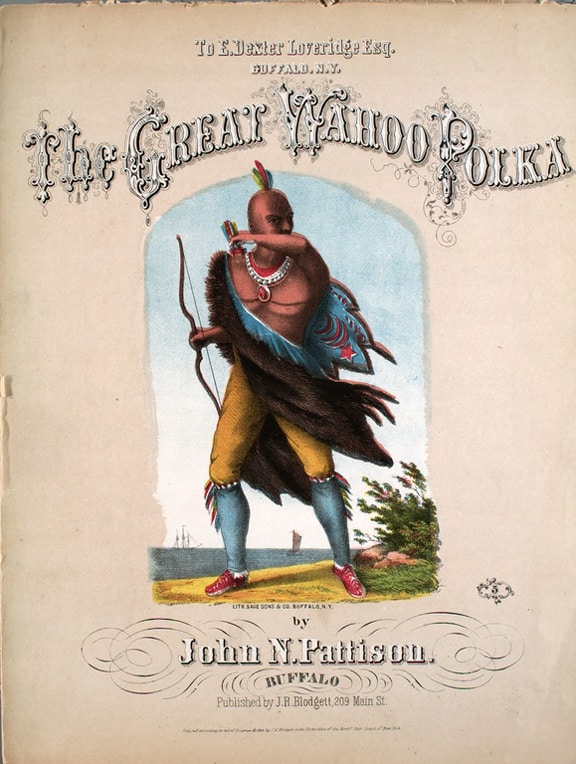 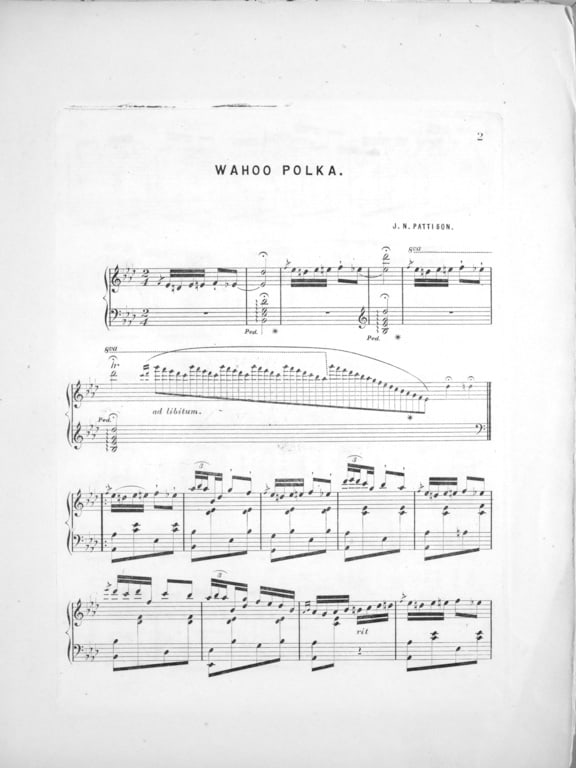 I have found numerous clipping referring to ‘Edwin’. From Memoirs of Milwaukee County: From the Earliest Historical Times …, Volume 2 edited by Jerome Anthony Watrous 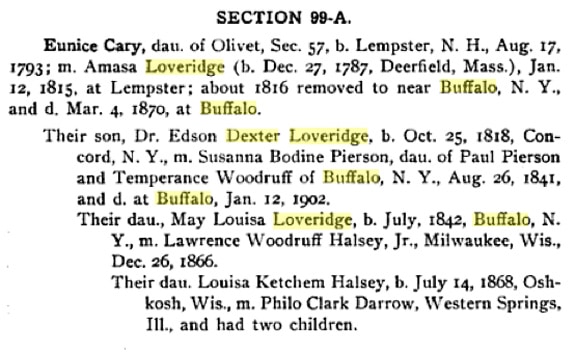 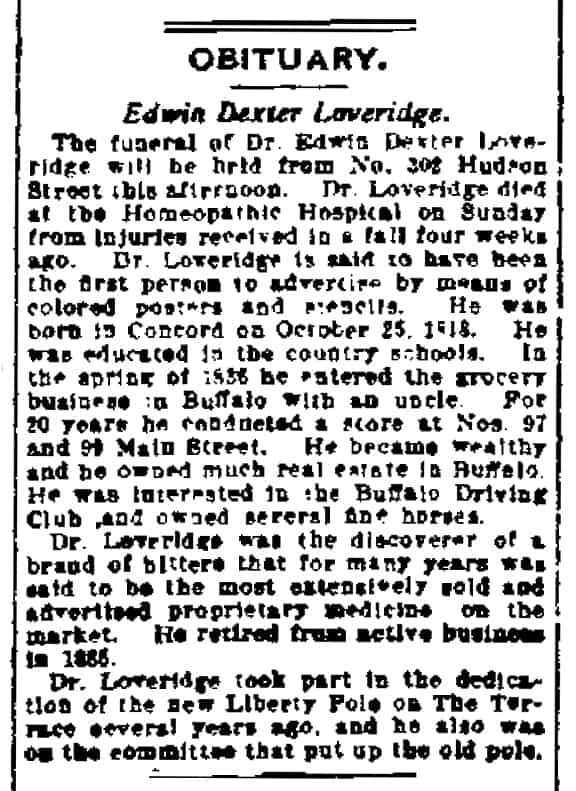 I found the obituary for Dr. Loveridge and it appears his name was Edwin – Brian Wolff 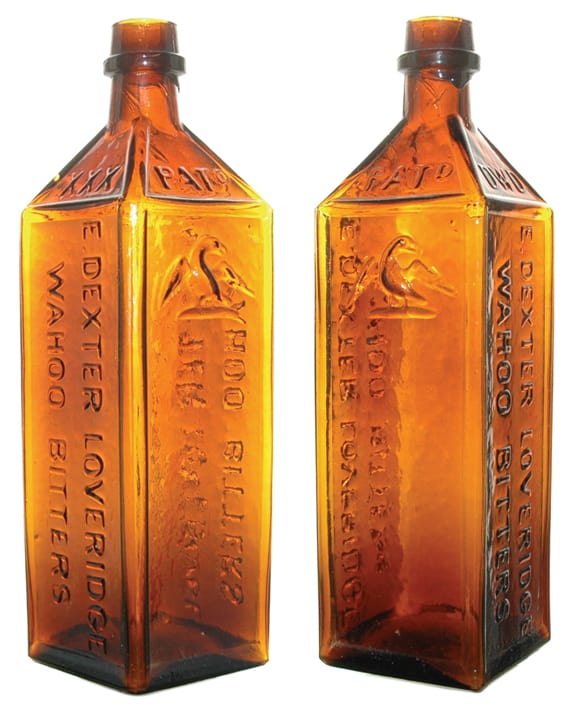 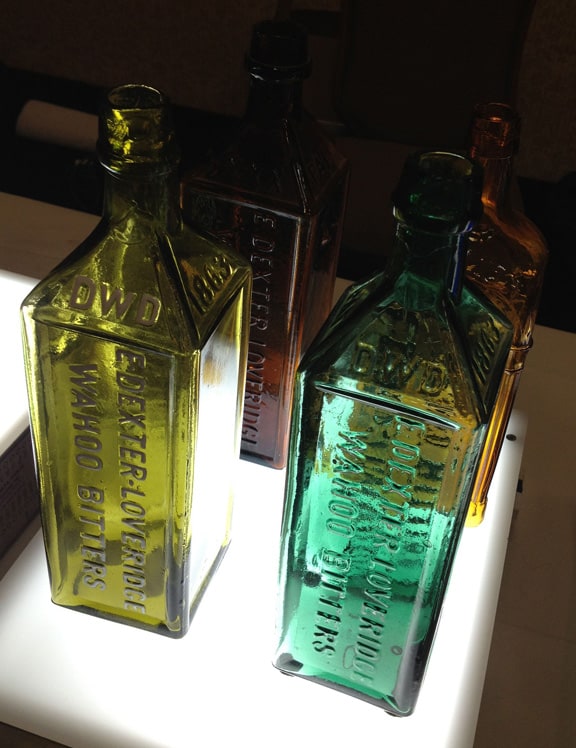 Two of my new E. DEXTER LOVERIDGE WAHOO BITTERS in emerald green and lime. My amber example sits beyond. These were on display at the 2012 Houston Bottle Show – Meyer table 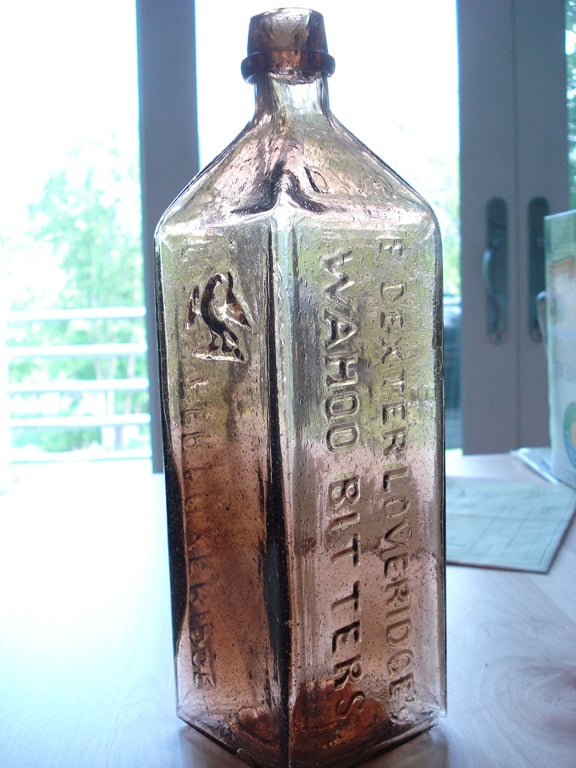 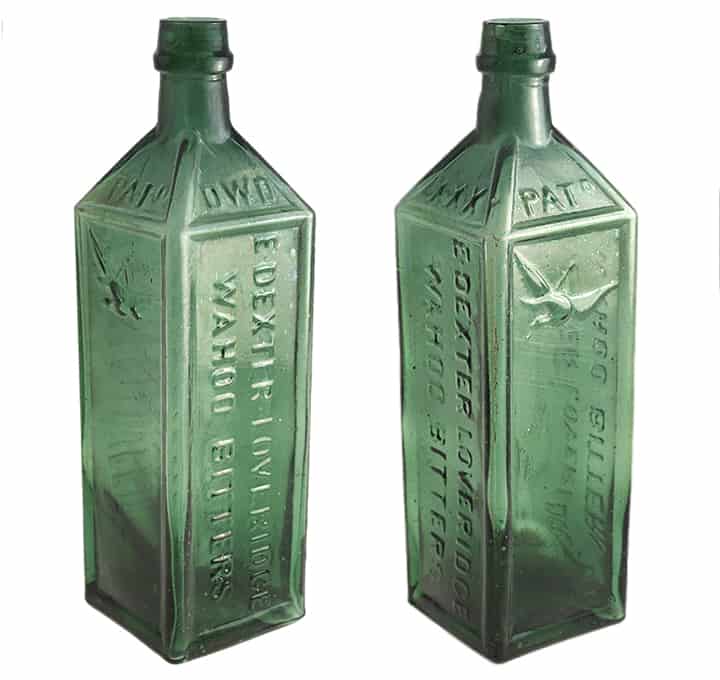 172. “DWD / E. DEXTER LOVERIDGE / WAHOO BITTERS” – “PATD” / (motif of eagle with arrow) – “SWS / E/ DEXTER LOVERIDGE / WAHOO BITTERS – 1863”, (Ring/Ham, L-126), New York, ca. 1863 – 1870, medium blue green semi-cabin, 10 1/8”h, smooth base, applied ring mouth. Some light exterior stain exists, mostly on two panels. This is of the type that can easily be professionally removed, also a few light scratches. Extremely rare and highly desirable color, one of only three or four known examples! In 1974 the consignors of this bottle found it in a dirt cellar crawl space of their home in Whitehouse, New Jersey. The home was built in 1850. Since that time they moved five times each time taking the bottle with them, being unaware of its importance or value. The last one we auctioned in this color was in 1991, when we auctioned the collection of the late Cris Batdorff. – Glass Works Auctions | Auction 106