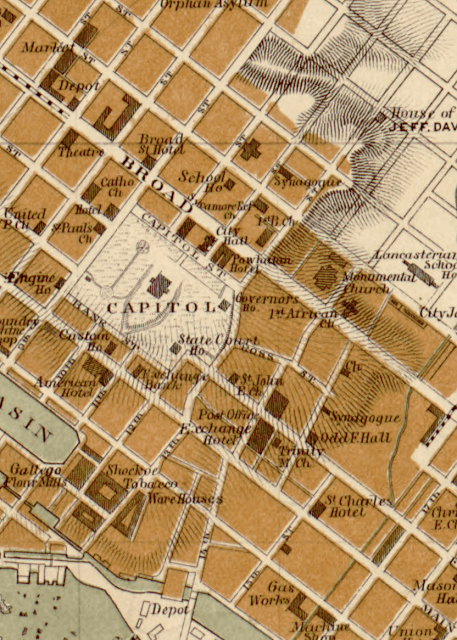 The Jackson’s Excelsior Bitters is an unlisted bitters that crossed my radar screen the other day. At first I thought it might be related to Jackson’s Aromatic Life Bitters, Stonewall Jackson Stomach Bitters or Jackson’s Stonewall Bitters. There are actually quite a few “Jackson” bitters. A popular name during the civil War era as you might imagine.

Anyway, the Jackson’s Excelsior Bitters was put out by a R. H. Jackson in Richmond, Virginia from about 1855 to 1858. His advertising used various testimonials from probably fictitious people who can not be verified. They took his bitters to get rid of dumb ague, dyspepsia, summer complaint, general debility, fever and voila, they were miraculously cured! The bitters was also recommended as a tonic, cocktail and remedy. Got to cover all bases. Various local druggist sold it like E. J. Picot, A. Bodeker, Charles Millspaugh, S. M. Zachrissons, Bennett & Beers and Alex Duvals.

In 1859, R. H. Jackson and J. M. Norris are renting 1/2 acres and a brick building at the corner of Main and 26th Street and the property is put up for auction by the owners. The drums of the impending Civil War that would tear apart out country, right through Richmond. Next we see listings for a Brigadier General R. H. Jackson, lieutenant-colonel and inspector-general, Department of Virginia, who is commanding a division of twenty-fifth Army Corps in the Union army under General Ulysses S. Grant. He drops off the radar after this time.

Advertisement
J 5.8 JACKSON’S EXCELSIOR BITTERS
Put out by R. H.
Jackson in Richmond, Virginia from 1855 to 1858

1855: Testimonial advertisement for JACKSON’S EXCELSIOR BITTERS made by R. H. Jackson. I tried three bottles and I am cured. Bitters can be found at various druggists in Richmond, Virginia (see below) 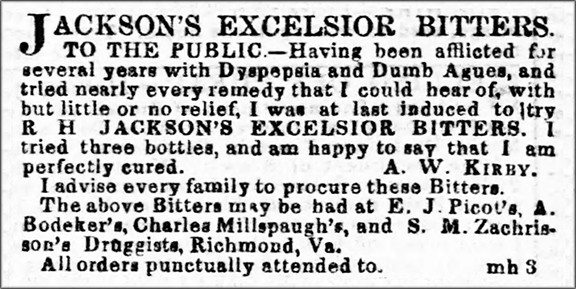 1855: Advertisement for JACKSON’S BITTERS made by R. H. Jackson. Free trial for Jackson’s Excelsior Bitters. Can be found at various druggists in Richmond, Virginia (see below) 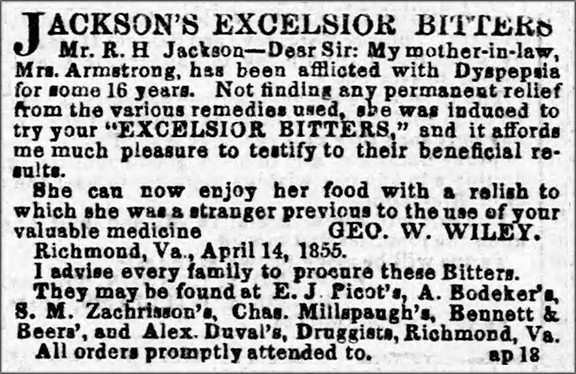 1857: Testimonial advertisement for Jackson’s Excelsior Bitters made by R. H. Jackson. Dear Sir – I have tried 100 bottles… (see below)

1858: Advertisement for JACKSON’S CELEBRATED BITTERS made by R. H. Jackson, Proprietor. Price only 50 cents per bottle. (see below) 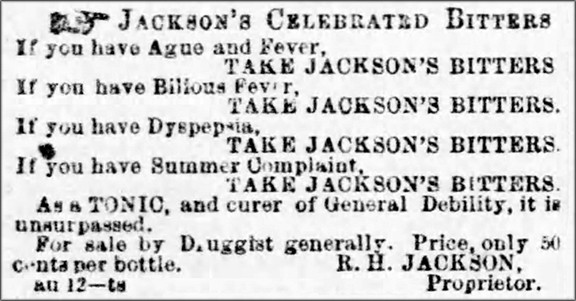 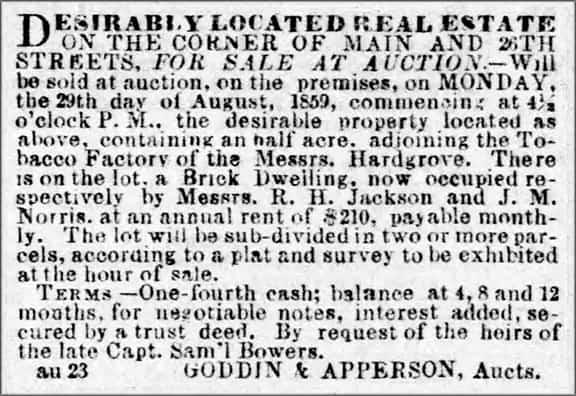 I immediately gave orders for the concentration of some of my brigades to make an assault, and informed General Grant. In the meantime, Hartsuff received an order from Grant looking towards an attack at a different point than the one selected by me; and afterwards I received one from him that the success of the day had been so great that he could spare me R. H. Jackson’s (formerly W. Birney’s) division of my corps, and that he would send it to me, and that then I could make a sure thing of the attack. – Richmond Occupied,    Entry of The United States Forces into Richmond, Virginia. April 3, 1865

1865: General R. H. Jackson mentioned – Compilation of the Official Records of the Union and Confederate Armies, 1894

Bvt. Brig. Gen. R. H. Jackson, lieutenant-colonel and inspector-general, Department of Virginia, is commanding a division of Twentyfifth Army Corps. Shall he go south with the corps or remain with his department? If made a full brigadier-general it would settle the question. Shall Brevet Brigadier-General Michie, first lieutenant of engineers and lieutenant-colonel and inspector-general, Twenty-fifth Army Corps, go with Twenty-fifth Corps or remain here as lieutenant of engineers? If made full brigadier it would settle the question. Michie and Jackson deserve the promotion. Shall Lieutenant-Colonel Smith, adjutant general, Twenty-fifth Army Corps, now acting assistant adjutant general this department, go with his corps, or remain here as chief assistant adjutant general department, which I recommend be done. General Weitzel has applied for the appointment of Major Wheeler as assistant adjutant-general of his corps and he is on duty with it.

Jackson is promoted full brigadier. Michie will have to go with the corps. Lieutenant-Colonel Smith can remain in the department, and Major Wheeler take his place in the corps. Does Michie command troops?

Ferdinand Meyer V is a native of Baltimore, Maryland and has a BFA in Fine Art and Graphic Design from the Kansas City Art Institute and School of Design. Ferdinand is the founding Principal of FMG Design, a nationally recognized design consultation firm. Ferdinand is a passionate collector of American historical glass specializing in bitters bottles, color runs and related classic figural bottles. He is married to Elizabeth Jane Meyer and lives in Houston, Texas with their daughter and three wonderful grandchildren. The Meyers are also very involved in Quarter Horses, antiques and early United States postage stamps. Ferdinand is the past 6-year President of the Federation of Historical Bottle Collectors and is one of the founding members of the FOHBC Virtual Museum.
View all posts by Ferdinand Meyer V →
This entry was posted in Advertising, Bitters, Civil War, History, Medicines & Cures, Remedy, Tonics and tagged bitters, Brigadier, Civil, Excelsior, general, J. M. Norris, Jackson, Michie, R.H. Jackson, Richmond, Virginia, war. Bookmark the permalink.