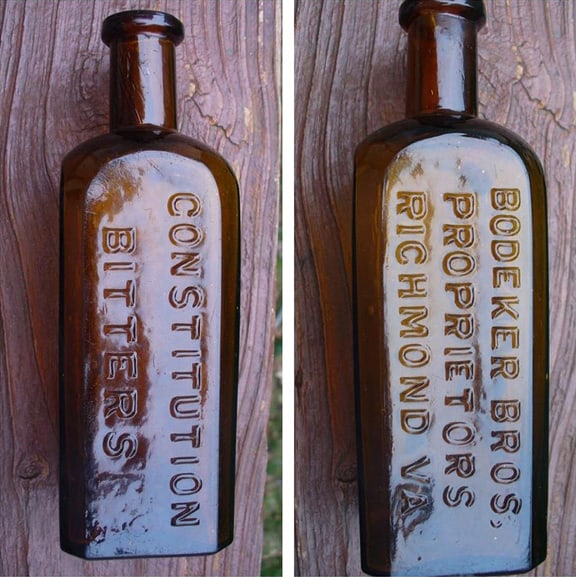 C 221 – CONSTITUTION BITTERS – Tom Leveille: The one shown above was dug in downtown Richmond, in the early 90’s by a man named Ronnie Lewis.

Are you familiar with this bitters?

I like it when I get these types of questions because it allows me the opportunity to go back and look more closely at a brand and my collection. It seems like Phase I of my journey was acquisition and phase II is learning. How fun.

So now we look at the Bodeker Brothers from Richmond, Virginia and their various medicines and bitters products, one being a strap sided flask. We also get a dose of woman suffrage. 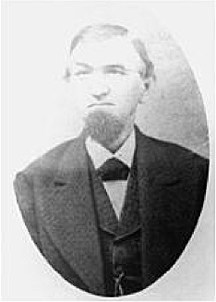 At age seventeen, the eldest of five brothers, August Bodeker emigrated from Hanover, Germany to Richmond, Virginia in 1836. Together with his brother Henry, he started the “A. Bodeker Apothecary” on Main Street in 1846. By 1860, August Bodeker – meanwhile married to suffragette Anna Whitehead – owned two slaves, property in Henrico County and a drug company worth $40,000. During the war, August sold drugs to most of Richmond’s 44 hospitals, among them Phoebe Pember’s and Sally Tompkins’ private hospitals. Virginia Historical Society, Richmond 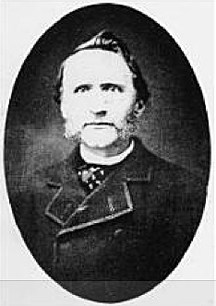 Henry Bodeker was August Bodeker’s younger brother and part owner of the business. As the Bodeker Drug Company was urgently needed for the production of all kinds of medicine, Henry did not take up arms during the Civil War. His son George H. Bodeker, however, served as a private in Captain Joseph K. Lee’s Co. B, 1st Virginia Volunteers, until he offered his services as a secret detective to the Provost Marshall’s Office in 1862, “being familiar with the German language.” Virginia Historical Society, Richmond

[Both above from The Germans of Charleston, Richmond and New Orleans During the Civil War – by Andrea Mehrlander] 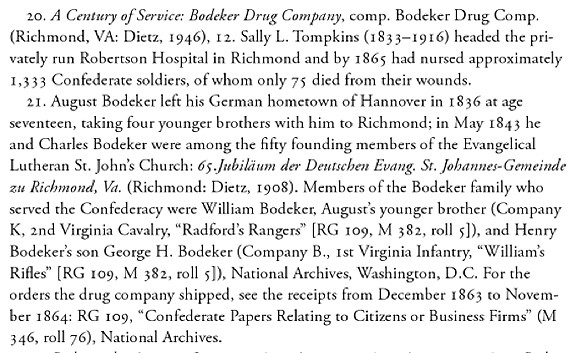 In 1856 Mr. Hoppe married Miss Elsie Bodeker, daughter of Dr. Henry Bodeker, Surgeon in the German navy, and Sophia Epmier, also a sister of Hon. Augustus Bodeker of the well known Bodeker family of Richmond. After the death of his wife, he retired from active business, and made his home with his only daughter, Mrs. Geo. E. Shuey. 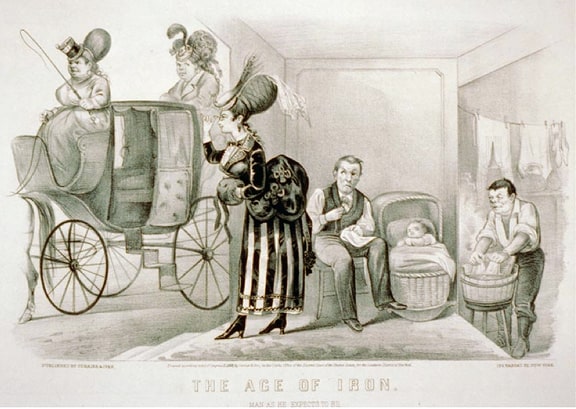 Born Anna Whitehead in New Jersey on about July 26, 1826, she was married at age eighteen to Augustus Bodeker, a German immigrant who worked as a clerk and druggist in Richmond. They had three children and remained in Richmond during the Civil War. Inspired by her reading of newspapers and other accounts of the activities of the National Woman Suffrage Association, she arranged for suffrage advocate Pauline Wright Davis to speak in Richmond early in 1870. The event and Bodeker’s sponsorship of it attracted the attention of national newspapers, and in March of that year she published a two-part article entitled “Defence of Woman Suffrage” in one of the city’s most influential newspapers.

Bodeker corresponded with other national advocates of woman suffrage and persuaded a federal judge to allow his courtroom to be used for another public address in favor of woman suffrage. The judge and his wife also attended the meeting at which Bodeker and other supporters of the cause founded the Virginia Woman Suffrage Association in May 1870 and elected delegates to a convention of the National Woman Suffrage Association. As president of the Virginia association, the first of its kind in the state, Bodeker arranged for Susan B. Anthony to speak in the federal courthouse in Richmond in December 1870. By then a well-known advocate of woman suffrage, Bodeker persuaded a member of the House of Delegates to introduce a resolution to grant the vote to women—the legislators never voted on it—and in 1871 attempted to vote in the general election in Richmond but was not permitted to do so. Instead of placing a ballot in the box, she placed in it a slip of paper on which she had written, “By the Constitution of the Untied States, I Mrs. A. Whitehead Bodeker, have a right to give my vote at this election, and in vindication of it drop this note in the ballot-box, November 7th, 1871.”

In spite of Bodeker’s work and of being acknowledged as a brilliant and effective organizer, the cause of woman suffrage failed to attract widespread support during the years immediately after the Civil War, and the Virginia Woman Suffrage Association faded into obscurity after less than a decade. Bodeker, too, disappeared from public view and died in October 1904. [The Library of Virginia]

The Carlyn Ring and W.C. Ham listings in Bitters Bottles are noted below: 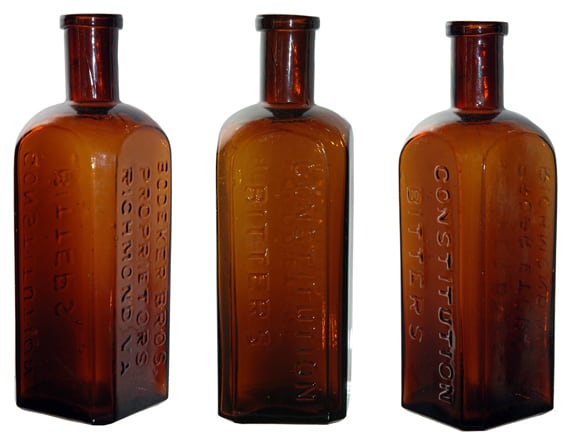 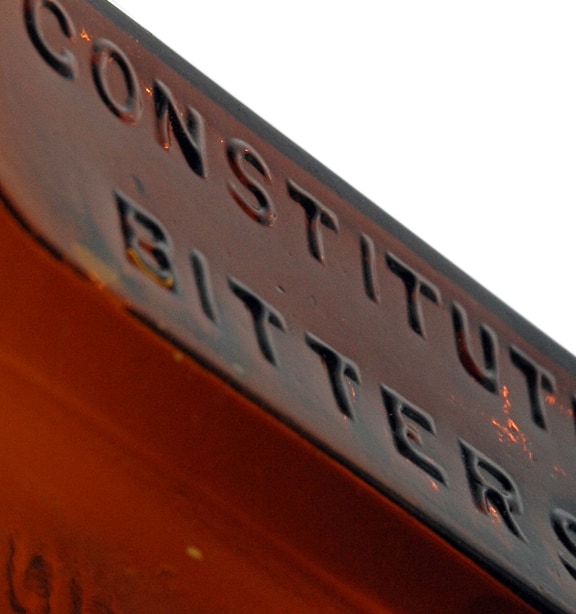 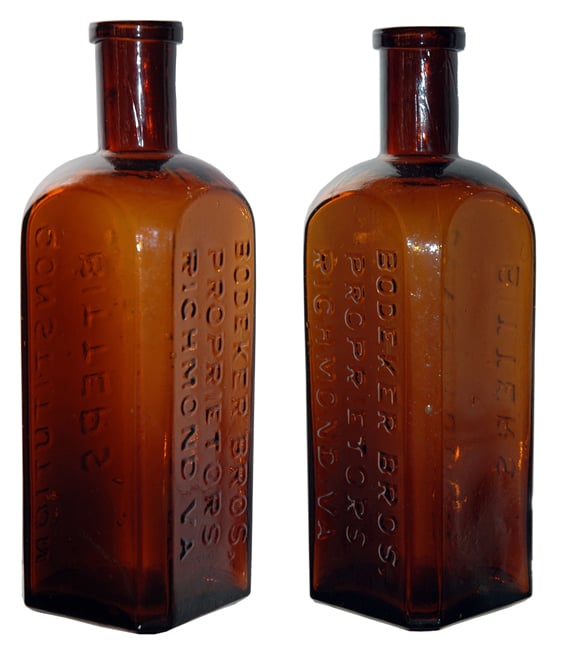 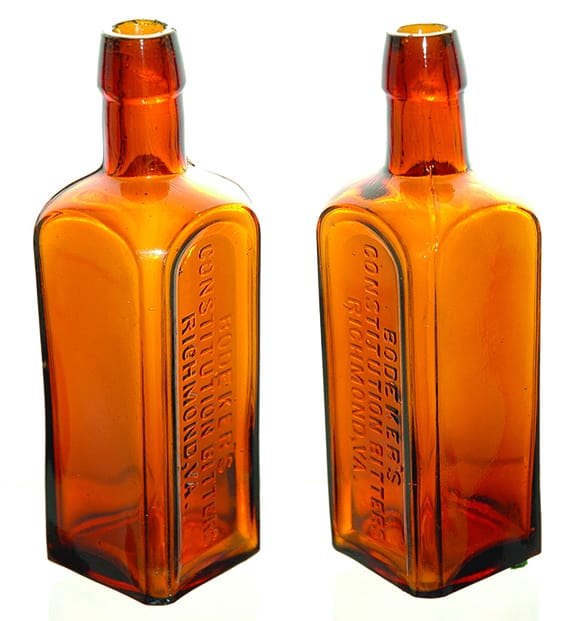 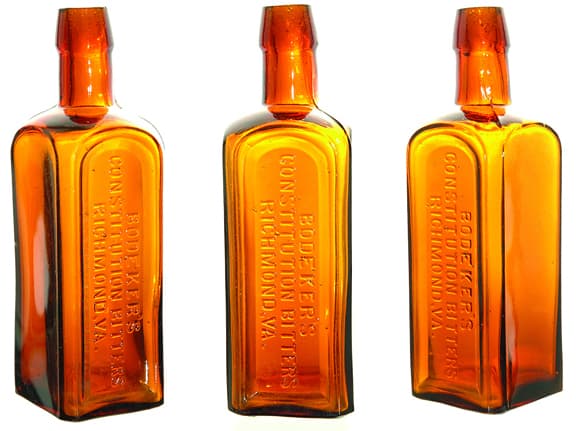 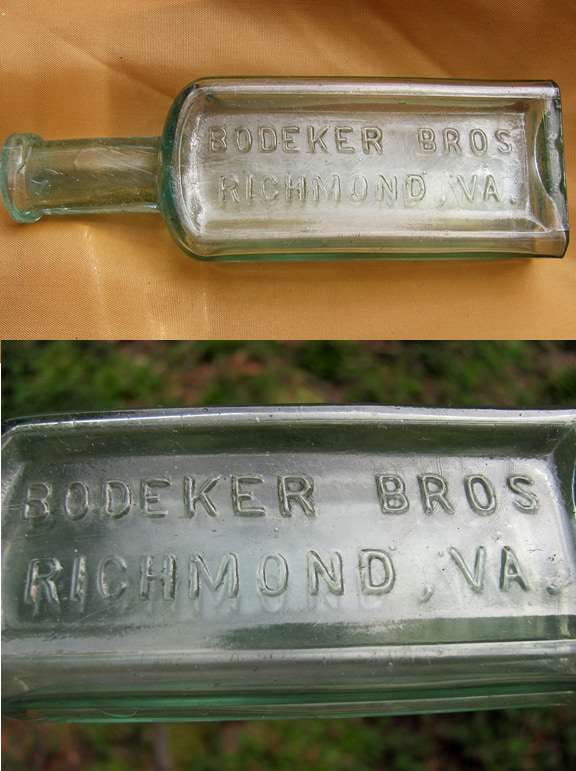 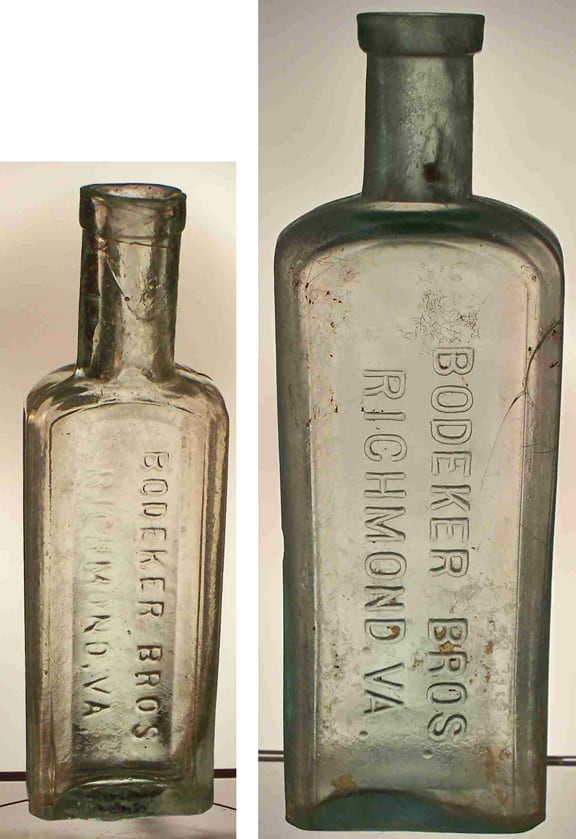 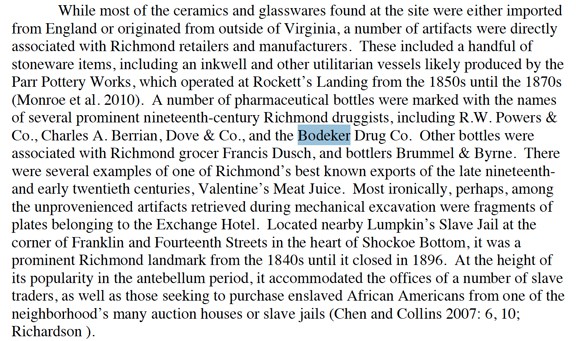 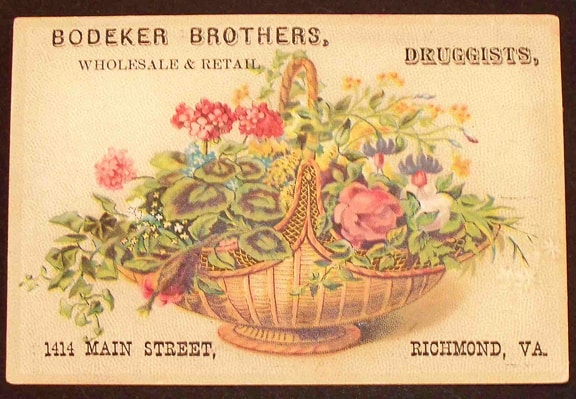 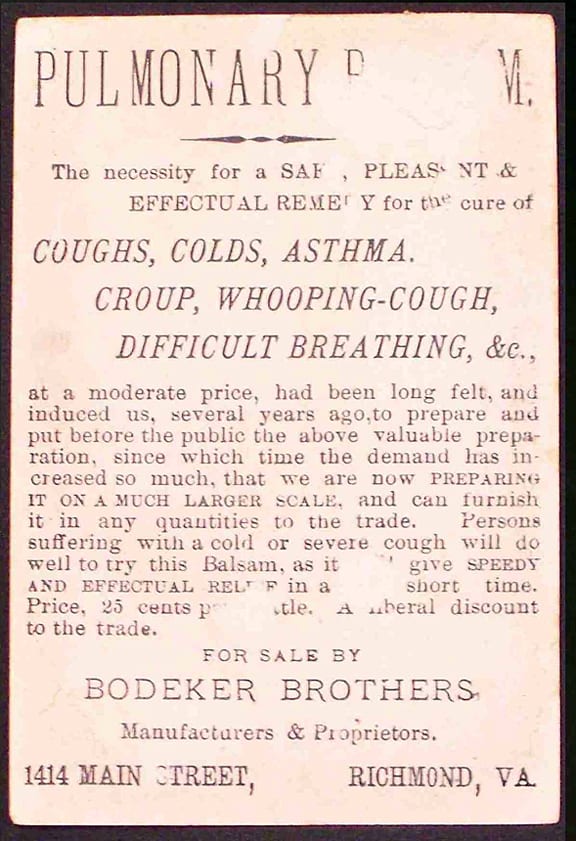 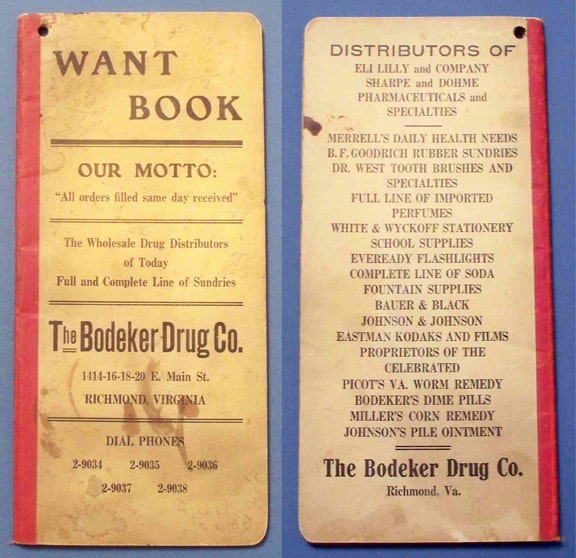 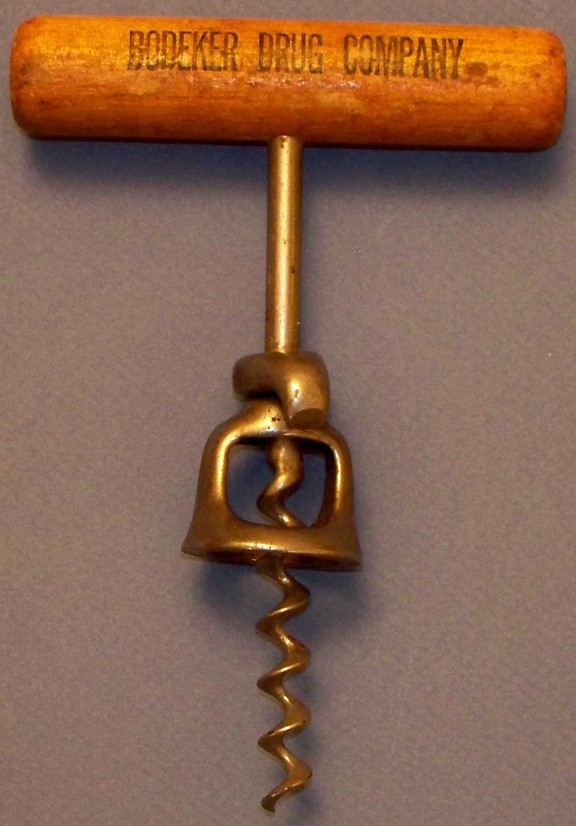 This is a cork-screw bottle opener. It is marked on both sides with BODEKER DRUG COMPANY – Chosi Virginia Drugstore Bottles 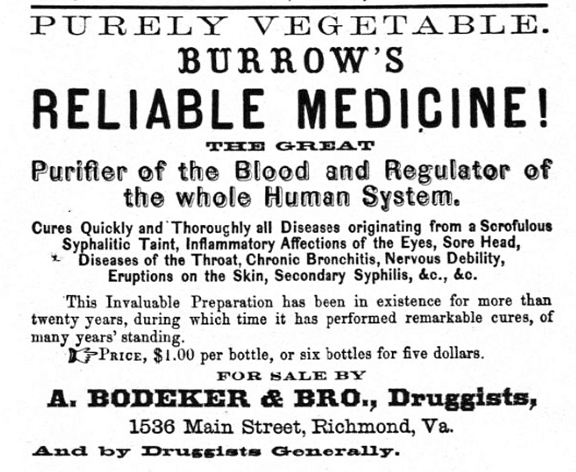 This is a 9″ long metal ice pick from the Bodeker Drug Company. It is marked as follows: front: COMPLEMENTS OF / BODEKER DRUG CO. / RICHMOND, VA. back: WE APPRRECIATE / YOUR BUSINESS – Chosi Virginia Drugstore Bottles