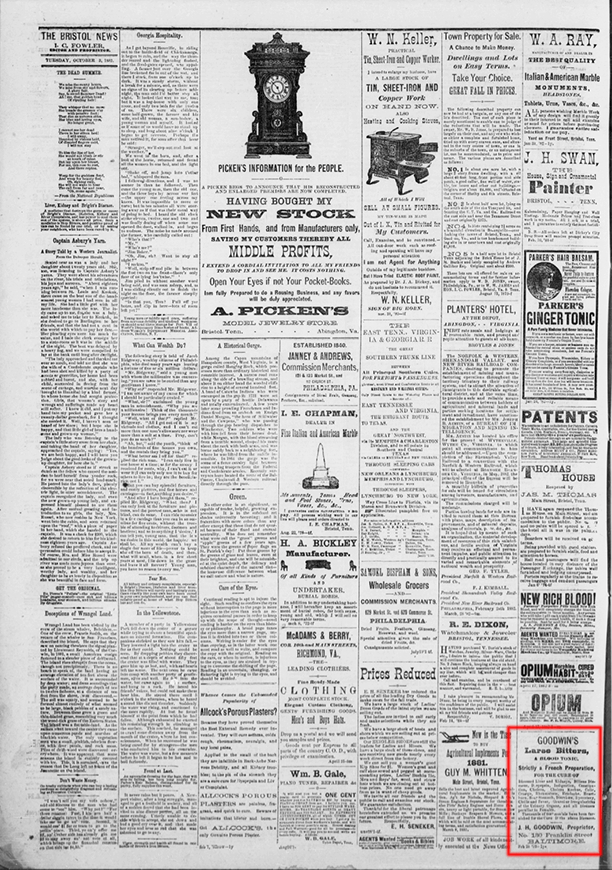 The advertisement below was found in the bottom right corner of a Virginia newspaper in 1882. Right beneath the word OPIUM. It represents the unlisted Goodwin’s Laree Bitters.

Wikipedia says that Laree may refer to a village and commune in France (Larée is a commune in the Gers department in southwestern France), a Lari (fish hook money), an obsolete coinage used around the Arabian sea, the Georgian lari, a unit of currency or the Maldivian laari, a unit of currency. The Urban Dictionary says the name LaRee has a french origin, meaning beautiful woman that is loved by all. Since advertising for this unlisted bitters says it is “Strictly a French Preparation”, we may have to go with a village in France or better yet “A beautiful French woman that is loved by all“. That is why I put the picture at the top of the post.

There are no bottle examples that I am aware of. So how did Joseph H. Goodwin, get and sell this bitters for a short time in 1882 and 1883 in Baltimore? There are barely any clues. He called it “A Blood Tonic”. 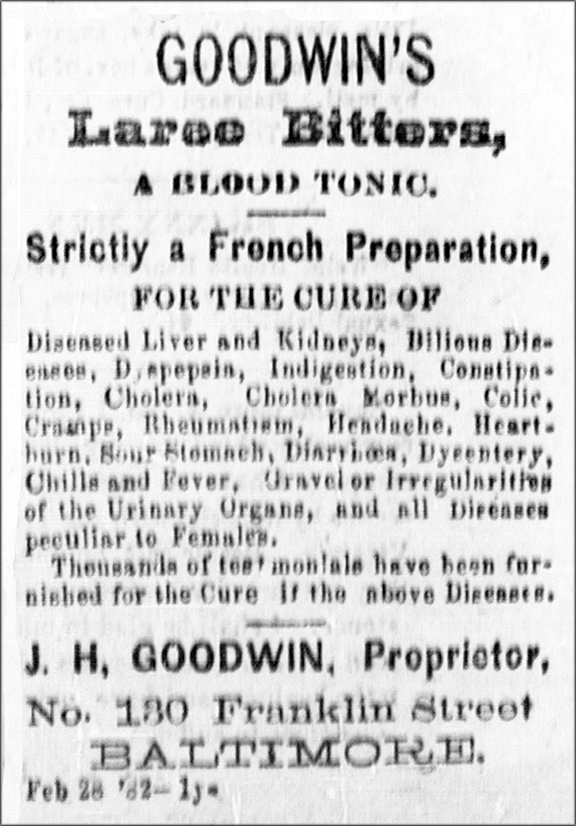 J. H. Goodwin, Patent Medicines, 130 Franklin St. – Among the many discoveries that chemistry has lately produced is that of Goodwin’s La Ree Bitters, which is allowed to be by all who use it the best blood tonic in the world, and is recommended by all medical advisers. Mr. Goodwin has been for the past three years established here, having purchased the interest of his predecessor, Mr. J. Waltz. He makes a leading specialty in the manufacture of his bitters and a liniment for rheumatism, and for the preservation of the teeth, extracts and essences. A full line of all kinds of drugs, patent medicines, soaps and sponges, chamois skins, essences and extracts, etc., are kept in stock, and sales are extensive, a large patronage being established over a wide section of the surrounding country. Mr. Goodwin is a native of Carroll county, and a gentleman of the highest standing in social circles, and is fast winning a high rank among the manufacturers of this branch of the trade. – Industries of Maryland: A Descriptive Review of the Manufacturing and Mercantile Industries of the City of Baltimore, 1882 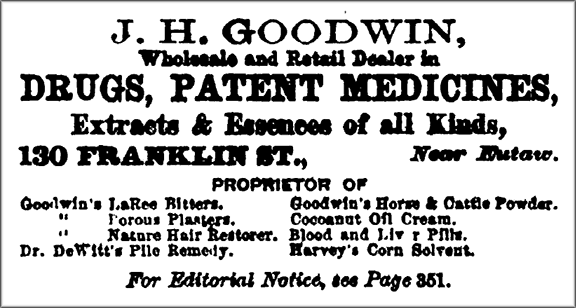 Advertisement for Goodwin’s LaRee Bitters sold by J. H. Goodwin in Baltimore – Industries of Maryland: A Descriptive Review of the Manufacturing and Mercantile Industries of the City of Baltimore, 1882 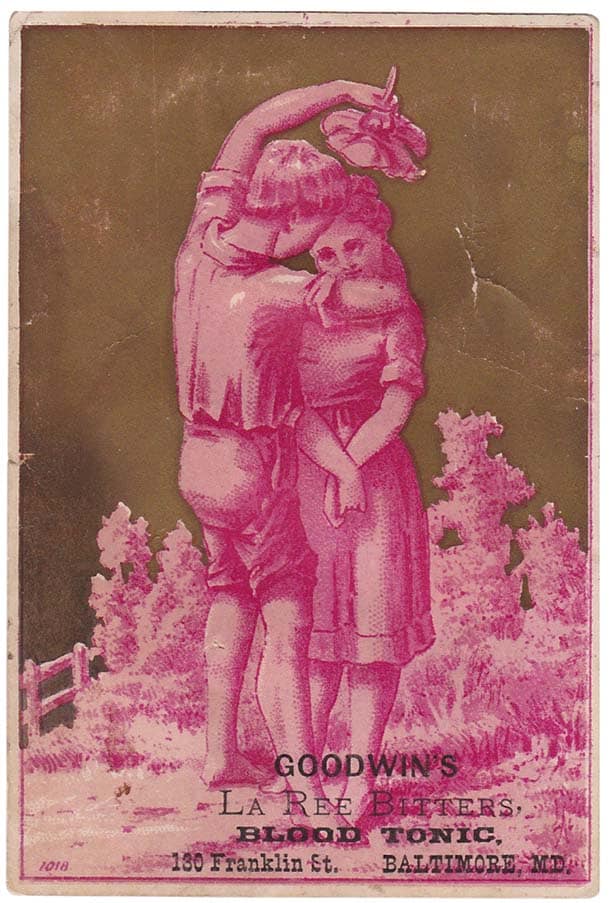 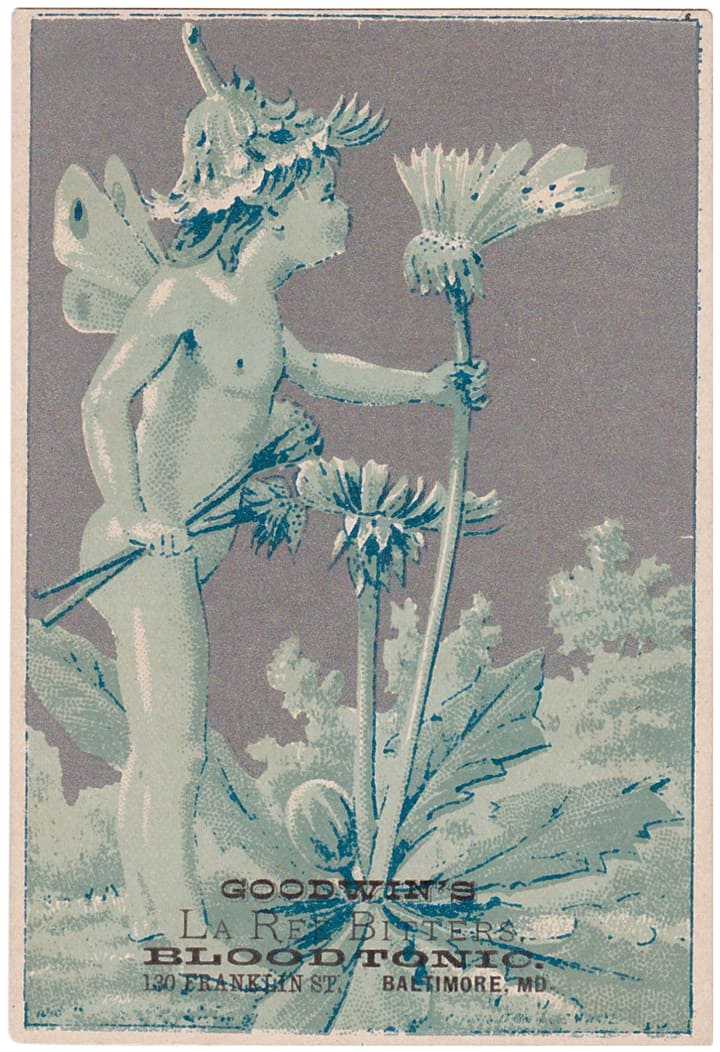 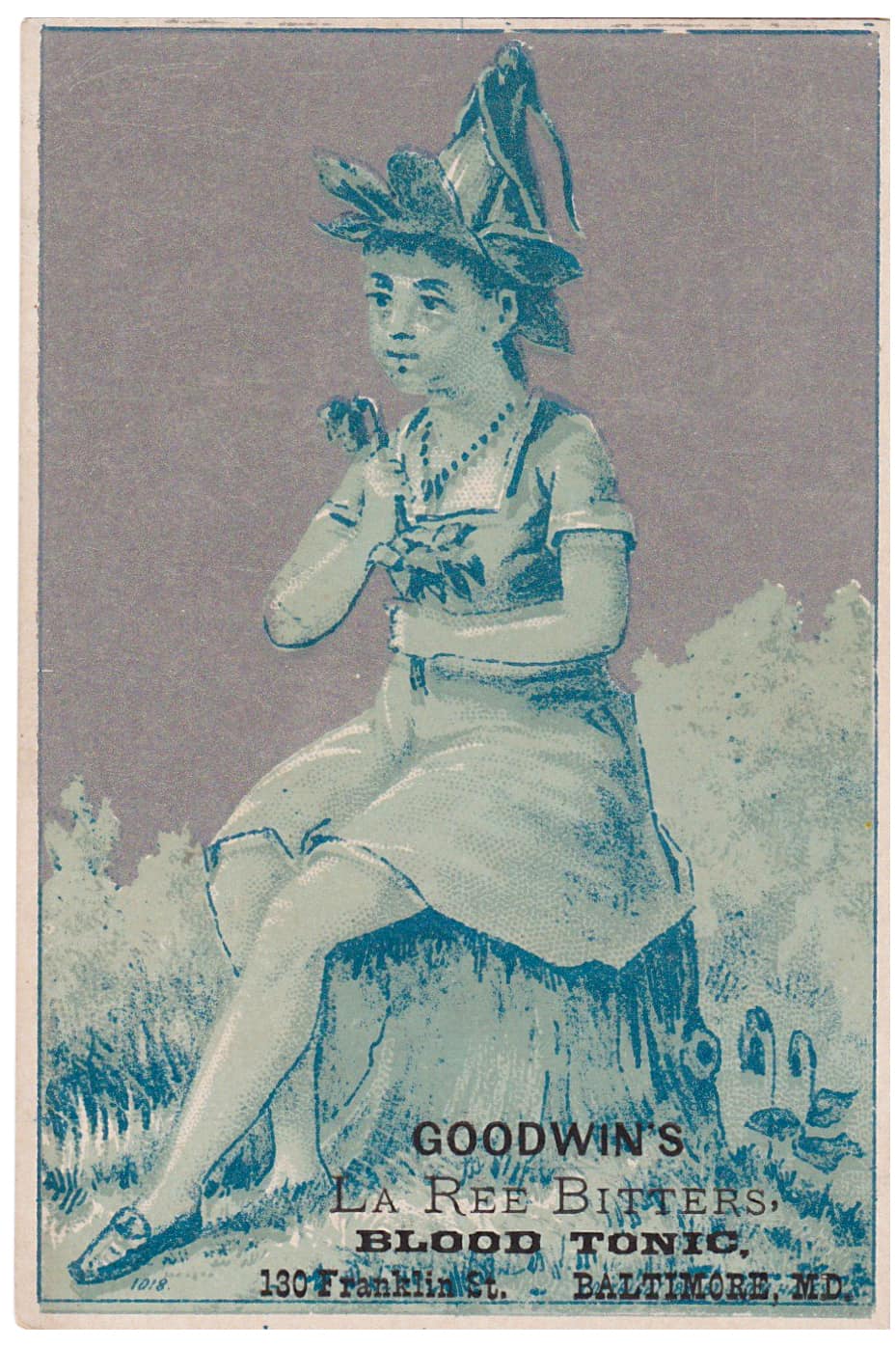 1879: Joseph H. Goodwin establishes himself in Baltimore. – Industries of Maryland: A Descriptive Review of the Manufacturing and Mercantile Industries of the City of Baltimore, 1882

NEW YORK SUPREME COURT.
The People ex rel. John Horan against > Writ of Certiorari. The Board of Police. )
Referred to the Counsel to the Corporation.

On reading communication from Joseph H. Godwin, dated June 19, 1884, it was Resolved, That in pursuance of section 181, chapter 410, of the Laws of 1882, application be and is hereby respectfully made to the Commissioners of the Sinking Fund, to lease, for the purposes of the Mayor, Aldermen and Commonalty of the City of New York, from Joseph H. Goodwin (for one year, with the option and privilege of renewing the same for five years), the land and premises now occupied as a station-house, prison, stables, etc., by the police force of the Thirty-fifth Precinct, for the use of the Police Department of said city, as a station-house, prison, stables, etc., for said Thirty-fifth Precinct, at the annual rent of $1,700.

Ferdinand Meyer V is a native of Baltimore, Maryland and has a BFA in Fine Art and Graphic Design from the Kansas City Art Institute and School of Design. Ferdinand is the founding Principal of FMG Design, a nationally recognized design consultation firm. Ferdinand is a passionate collector of American historical glass specializing in bitters bottles, color runs and related classic figural bottles. He is married to Elizabeth Jane Meyer and lives in Houston, Texas with their daughter and three wonderful grandchildren. The Meyers are also very involved in Quarter Horses, antiques and early United States postage stamps. Ferdinand is the past 6-year President of the Federation of Historical Bottle Collectors and is one of the founding members of the FOHBC Virtual Museum.
View all posts by Ferdinand Meyer V →
This entry was posted in Advertising, Bitters, Druggist & Drugstore, History, Medicines & Cures, Tonics, Trade Cards and tagged Baltimore, bitters, Blood, Druggist & Drugstore, Franklin, French, Goodwin, Goodwin's, J. Waltz, Laree La Ree, maryland, Medicine, Patent, Preparation, Tonic. Bookmark the permalink.