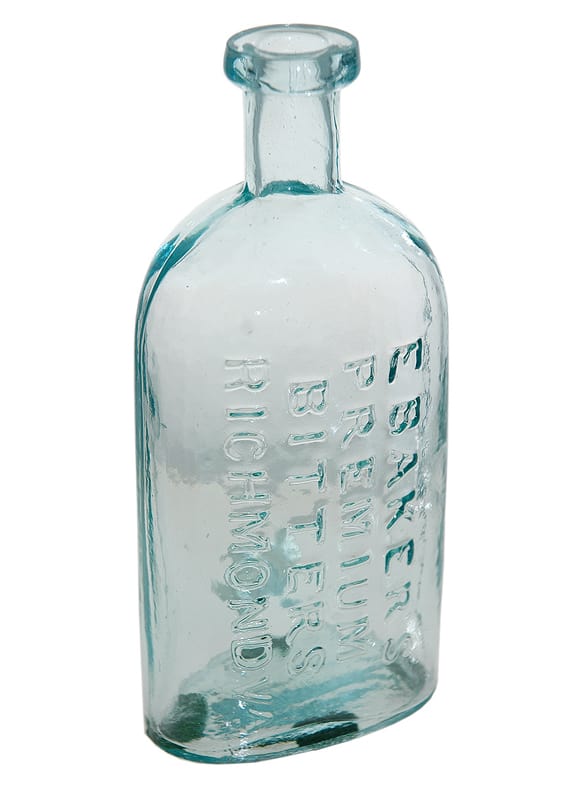 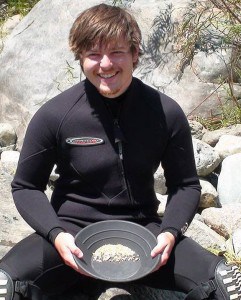 At the Baltimore Bottle Show this past March, Virginia digger and collector Tom Leveille, who now lives in Newport News, Virginia asked me to take a picture of my Virginia Bitters bottles in a group shot. I knew this might be a difficult assignment because I would have to look at my records, embossings and other info to determine exactly which bottles qualified. Some bottles may be from Virginia and may not even be embossed with a Virginia city, town or state name. I also asked about the Ta Tsing Bitters from West Virgina (Read previous post: Ta Tsing Bitters – The Great Chinese Remedy) and Tom said sure “Both Virginia’s”.

Of course some Bitters bottles jumped right to the front of the list and that is where I will start. The E. Bakers Premium Bitters | Richmond, VA.

Tom has also set up the Richmond Area Bottle Collectors Association on facebook and belongs to the Richmond Bottle Club. 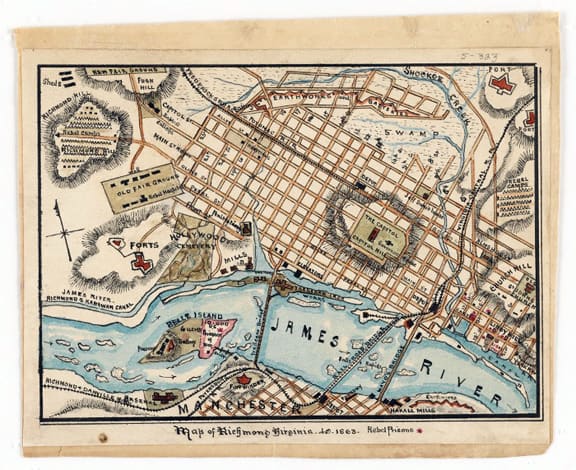 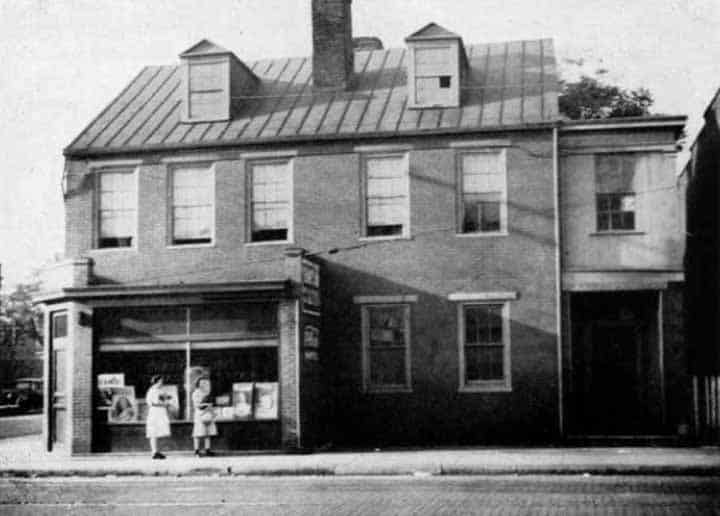 Elijah Baker lived and worked out of the house pictured above. The house was built in 1850 and had an arrangement of porch and entrance somewhat unique in architectural style for Richmond. The two-story portico, instead of being in the rear, is on the west end of the house, and just below, is the rather elaborately carved entrance door. This unusual arrangement is probably due to the fact that Baker carried on his business at his home. As late as 1885 he was making “Baker’s Premium Bitters”, one of the many patent medicines extensively advertised in old Richmond newspapers. – reference Old Richmond Neighborhoods, Mary Wingfield Scott

Incoming email 29 July 2013: “I have done a bit of research on Elijah Baker, as he was my 4th-great-grandfather. If you’re interested, just today I had posted a blog about him” Read about Elijah Baker. You mentioned advertising on your page – there is one ad included on my blog, but I have others, which I’ve attached to this e-mail. Most of them are from 1894, when his grandson Elijah Jr. was running the business. Hope these are some help!” Five new Advertisements posted below. 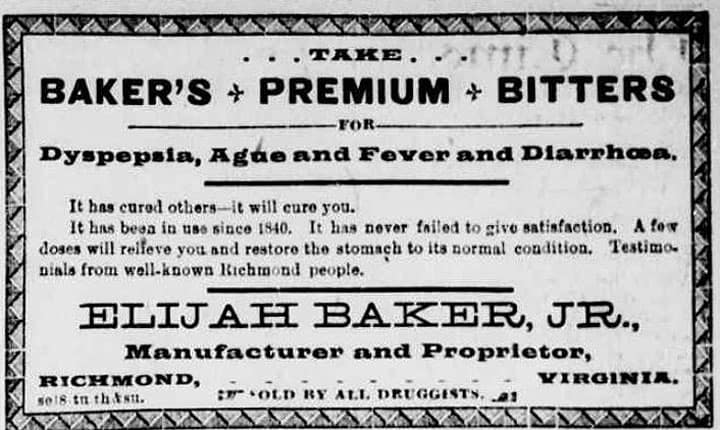 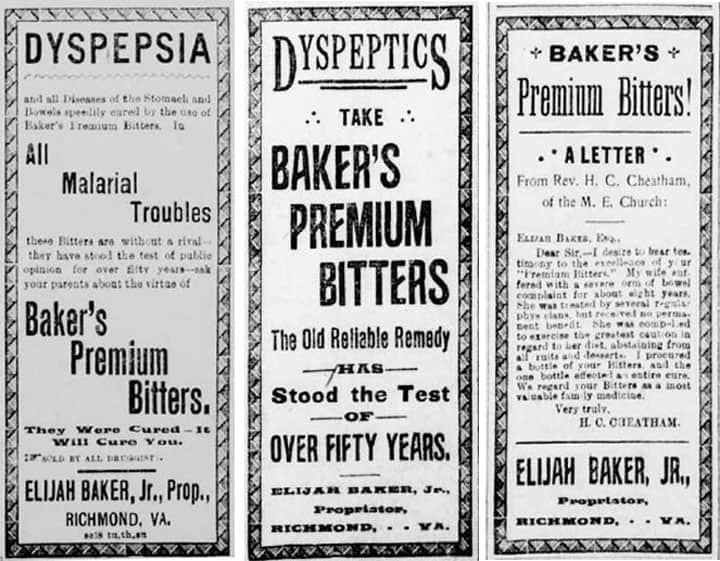 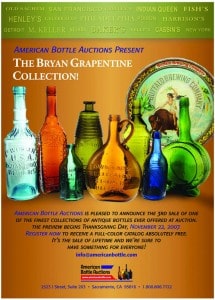 My smooth base example was purchased at the famous 3 session American Bottle Auctions | Grapentine III | Auction 43 and was Lot #868 in November 2007.

I would like to ask the Tom and/or the Richmond Bottle Club to get me more information on this bottle such as the label, advertising, where it was made and information on E. Baker, that is, if it exists. 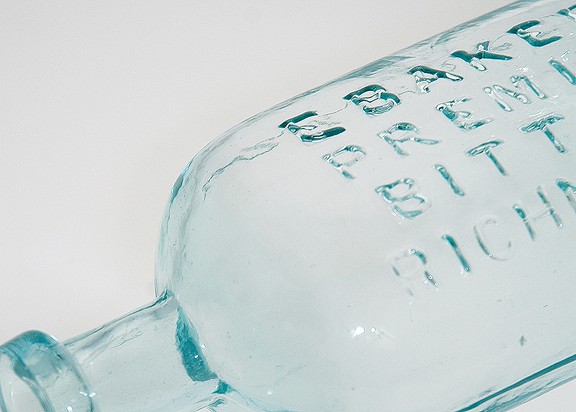 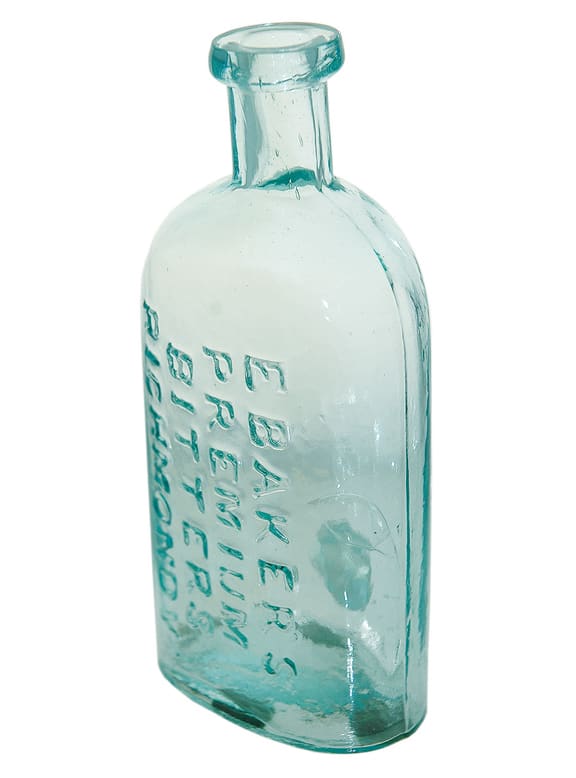 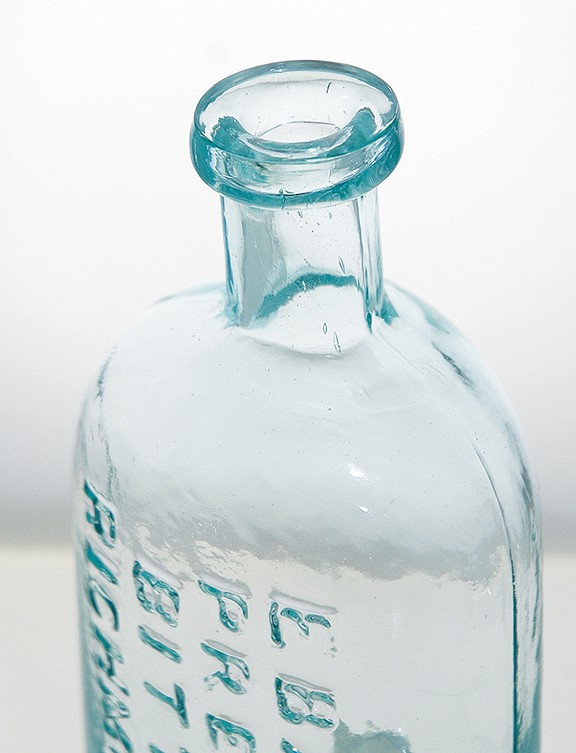 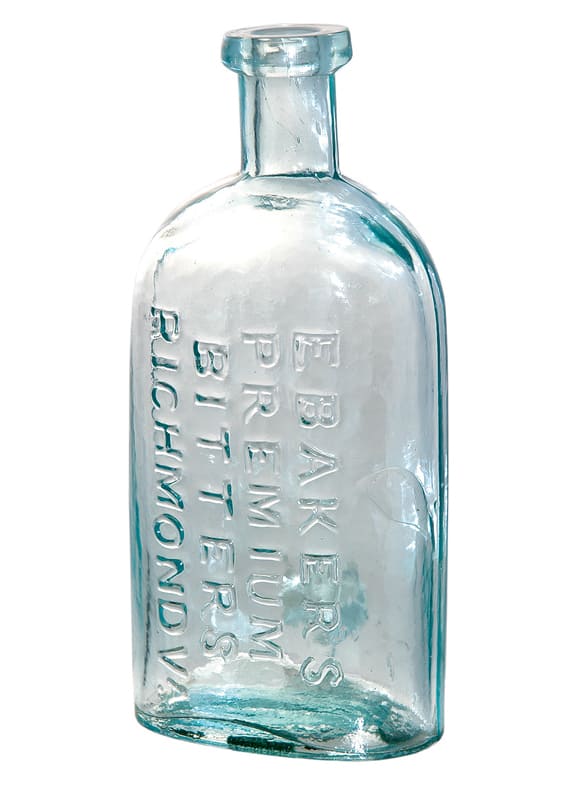 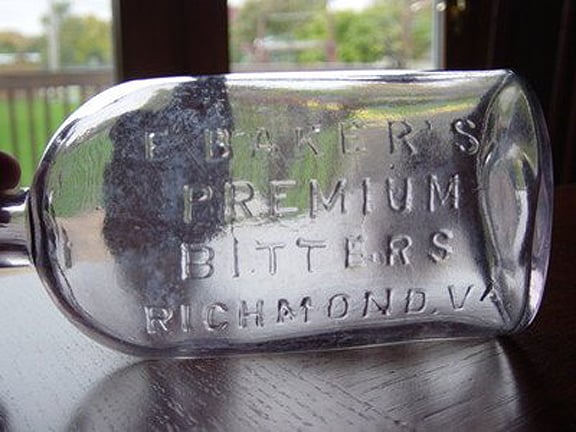 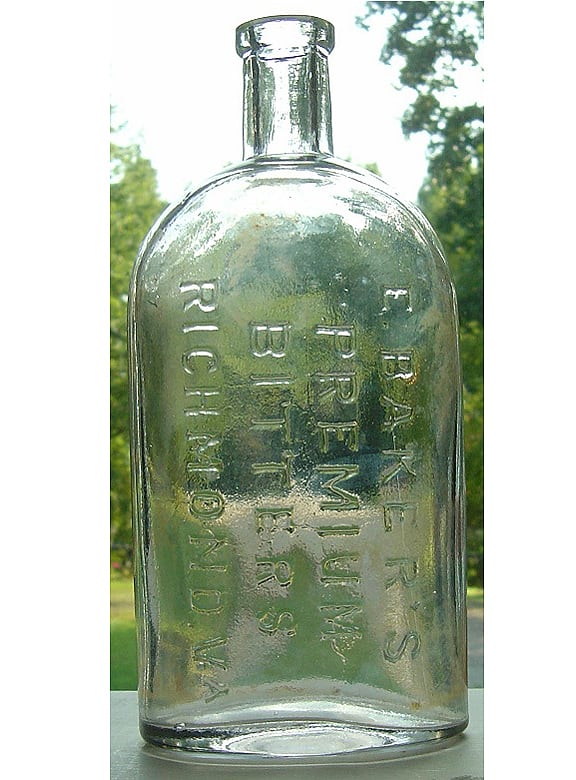 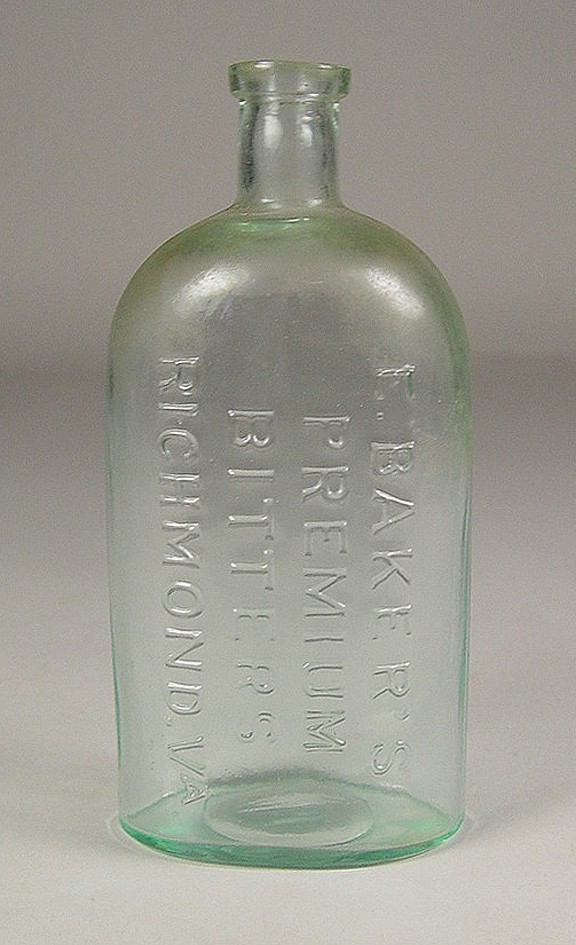 Ferdinand Meyer V is a native of Baltimore, Maryland and has a BFA in Fine Art and Graphic Design from the Kansas City Art Institute and School of Design. Ferdinand is the founding Principal of FMG Design, a nationally recognized design consultation firm. Ferdinand is a passionate collector of American historical glass specializing in bitters bottles, color runs and related classic figural bottles. He is married to Elizabeth Jane Meyer and lives in Houston, Texas with their daughter and three wonderful grandchildren. The Meyers are also very involved in Quarter Horses, antiques and early United States postage stamps. Ferdinand is the past 6-year President of the Federation of Historical Bottle Collectors and is one of the founding members of the FOHBC Virtual Museum.
View all posts by Ferdinand Meyer V →
This entry was posted in Bitters, Collectors & Collections, History, Medicines & Cures, Questions and tagged bitters, collection, E. Baker's, Meyer, Newport News, Premium, Richmond, Tom Leveille, Virginia. Bookmark the permalink.