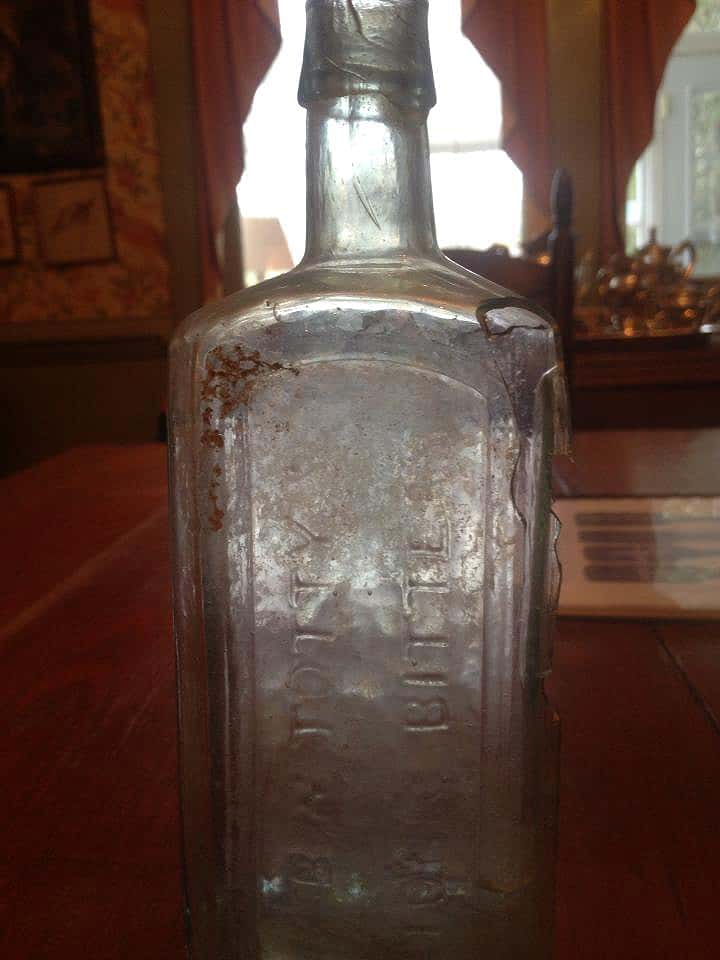 “There are no known whole examples”

Wow, here is a extremely rare and possibly unique bitters that ‘appeared’ on my Peachridge Glass facebook page. There is no listing in the Ring & Ham Bitters Bottles or Bitters Bottles Supplement. [30 March 2013] Two new pictures of same bottle. The bottle is 9″ tall.

Bill Ham is refining his new listing for the bottle. *Updated 03 April 2013 with listing estimate from Bill Ham for Bitters Bottles Supplement 2.

Benjamin Woodson Totty born in Richmond, VA. In 1805 and died there in 1870. He was a merchant and saloonkeeper there. Example resides in Virginia collection. 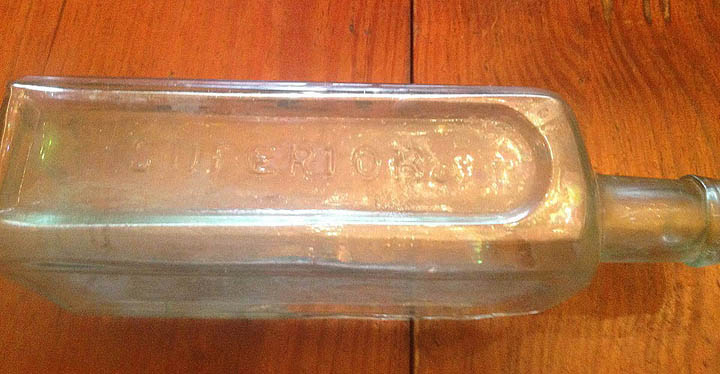 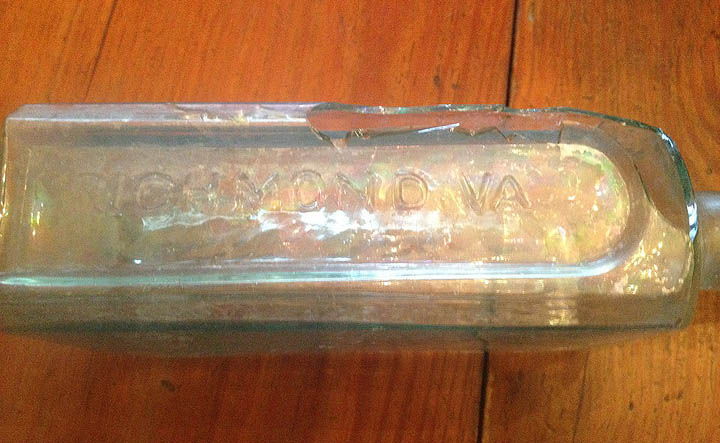 By using various online search tools I have put together some snippets of information for Mr. Totty who produced the Superior Tonic Bitters around 1850 or so in Richmond, Virginia. 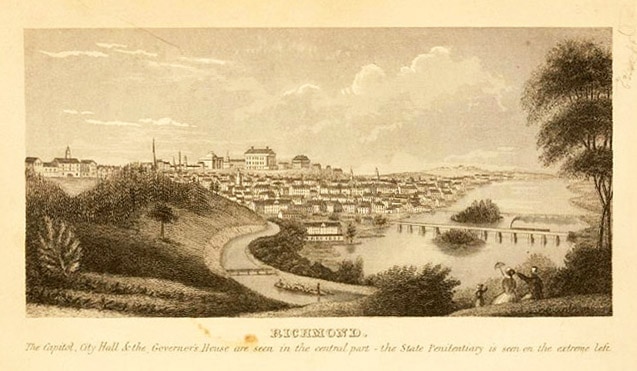 Richmond in 1850 – from Of Virginia Its History and Antiquities 1852

Sacred to the memory of Jacintha Consort of Benjamin W. Totty who died June 29, 1848 In the 43rd year of her age Leaving an affectionate husband and aged mother and five children to mourn her loss. She was a devoted and affectionate wife, a dutiful daughter. Her illness which was a severely painful nature she bore with Christian fortitude and resignation. And died relying upon the mercy of God. Through the merits of his blessed Son, Jesus Christ. Then shall the ___ return to the earth as it was and the spirit shall return to God who gave it.

1850 Joshua Alvis: is charged with “maliciously and feloniously” shooting Thomas, a slave, the property of Frederick Weidemeyer, with intent to maim, disable, and kill him; case sent to the next Henrico Co. Circuit Court; Alvis made bond of $500, with Benjamin W. Totty his surety; Nathan Turner [had a license to keep a private house of entertainment] and Robert Ralston gave bond to appear as witnesses. Henrico Co tax list, 1811, 13-14 1860 Richmond Directory: B. W. TOTTY, Grocer on Cary Street bet. 13th & 14th sts. Suicide of a Physician February 18 1870: published in Richmond, VA

Dr. Charles R. BRICKEN, a well-known citizen, died by his own hand (at the residence of this father-in-law, Mr. B. W. TOTTY) yesterday morning. He has been for some time past in very bad health and suffering with depression of spirits, under the influence of which he shot himself, death almost immediately ensuing.

Dr. BRICKEN formerly enjoyed a good practice as a physician in Richmond, but before the war went into the liquor trade. After the war he became one of the lessees of the Richmond Theatre, with Mr. GRAN (Grau?) as his partner. He wrote several books while in the practice of his profession, and was also the author of “Cabin and Parlor” and several other plays – one or two of which are still acted on the American stage. A few weeks ago he delivered a lecture on the subject of Life Insurance on Oregon Hill. Dr. BRICKEN was an amiable and popular man. Some of our people will remember him as having been at one time surgeon of the [First Regiment Virginia Volunteers, Company H,] Mechanics Guard.

Ferdinand Meyer V is a native of Baltimore, Maryland and has a BFA in Fine Art and Graphic Design from the Kansas City Art Institute and School of Design. Ferdinand is the founding Principal of FMG Design, a nationally recognized design consultation firm. Ferdinand is a passionate collector of American historical glass specializing in bitters bottles, color runs and related classic figural bottles. He is married to Elizabeth Jane Meyer and lives in Houston, Texas with their daughter and three wonderful grandchildren. The Meyers are also very involved in Quarter Horses, antiques and early United States postage stamps. Ferdinand is the past 6-year President of the Federation of Historical Bottle Collectors and is one of the founding members of the FOHBC Virtual Museum.
View all posts by Ferdinand Meyer V →
This entry was posted in Bitters, Druggist & Drugstore, Facebook, History, Questions, Tonics and tagged B.W. Totty, Benjamin W. Totty, bitters, grocer, Henrico, Jacintha Totty, merchant, Richmond, Saloon, Tom Leveille, Tonic, Virginia, Woodson. Bookmark the permalink.