Wakefield’s Strengthening Bitters from Bloomington Illinois posted by James Viguerie over at Bitters Bottles on Facebook. 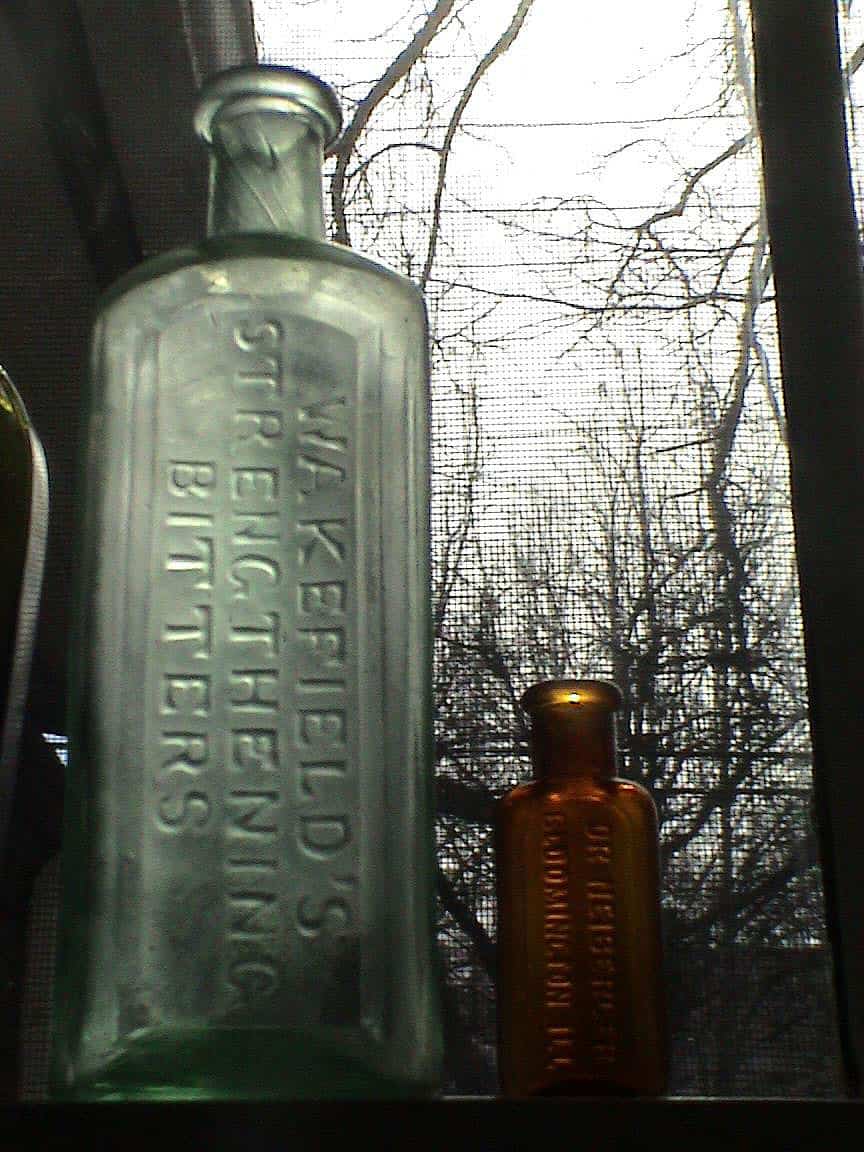 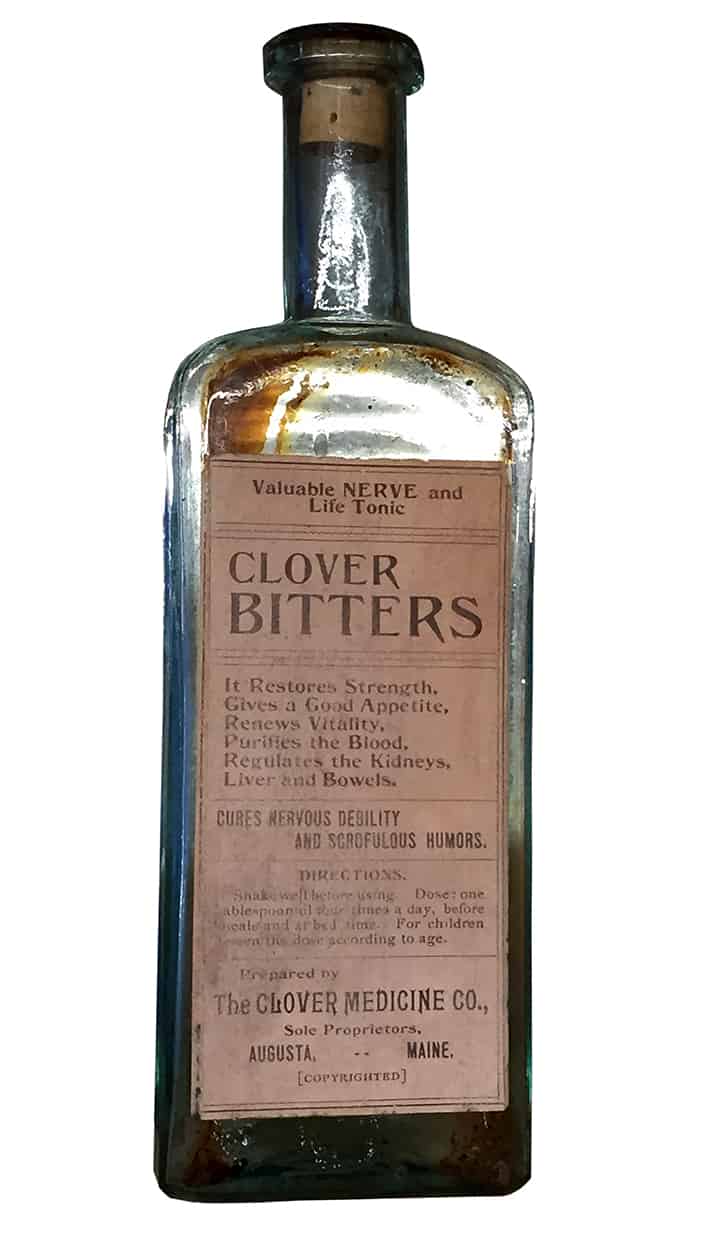 Ferdinand, Saw this label-only bitters in a shop a few days ago (see attached). I’ve seen one other labeled example over the years but it was on a bottle that was embossed “Clover Medicine Co.” and the label was in much worse shape. Nonetheless, just thought I would share. Best Regards, 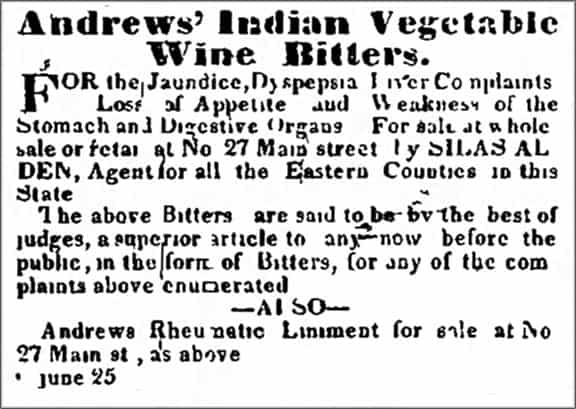 Raining Still. Closing in on 8 inches here at Peach ridge. Here is reference to a very old and unlisted Andrew’s Indian Vegetable Wine Bitters from Maine. Found it while working on a Dr. Solomon’s Indian Bitters post. Ad from Bangor Daily Whig and Courier on Friday, July 24, 1846.

Hyde’s Home-Made Bitters scan of photograph taken from a 1974 The Sun Magazine (Baltimore, Maryland) article “Bottled History at Hampton“. All bottles in the article were found in the basement of the Hampton Mansion near where I grew up. This bitters is unlisted. 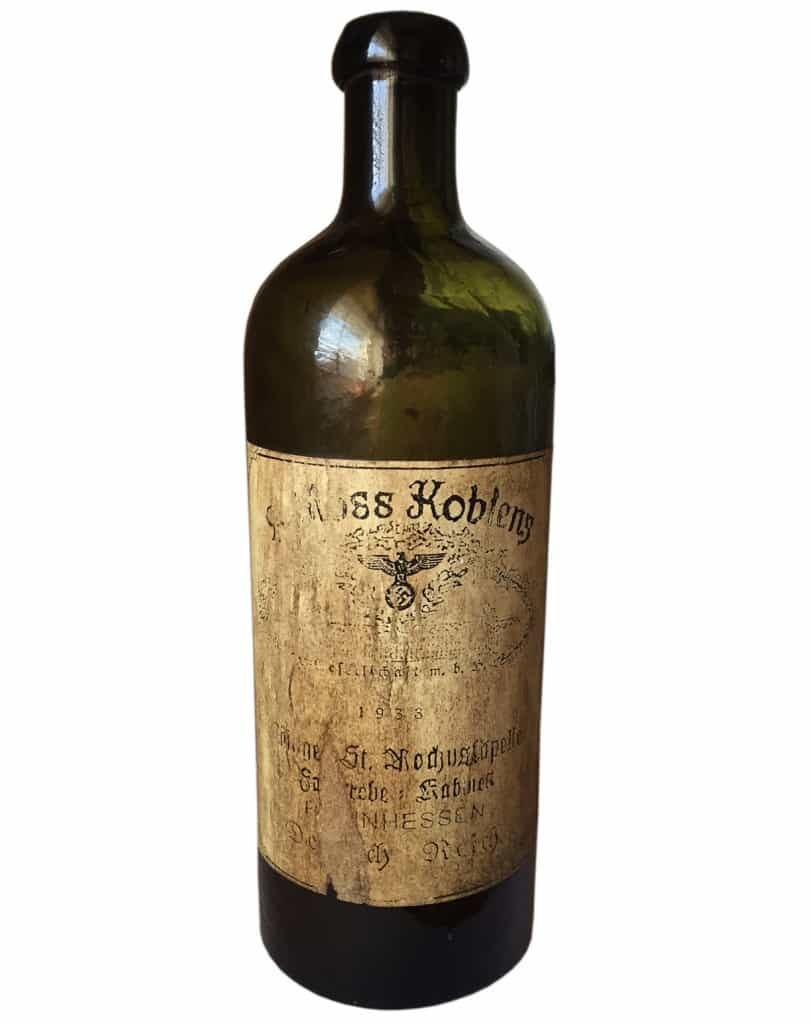 The formal emblem of the Nazi Party was a German eagle perched above a swastika with wings spread. The bold and clean graphic of this image symbolised the rigid order of Hilter’s regime.

I just read your article all about the Bitterquelle bottle, very interesting indeed. I wonder if you have come across a bottle of Bitterquelle that has had a label overlaid as in the image attached? A friend was in  the armed forces in Europe in 1945 and said that he got it out of a house in cologne. Many thanks for any help you might be able to give. Kind regards. 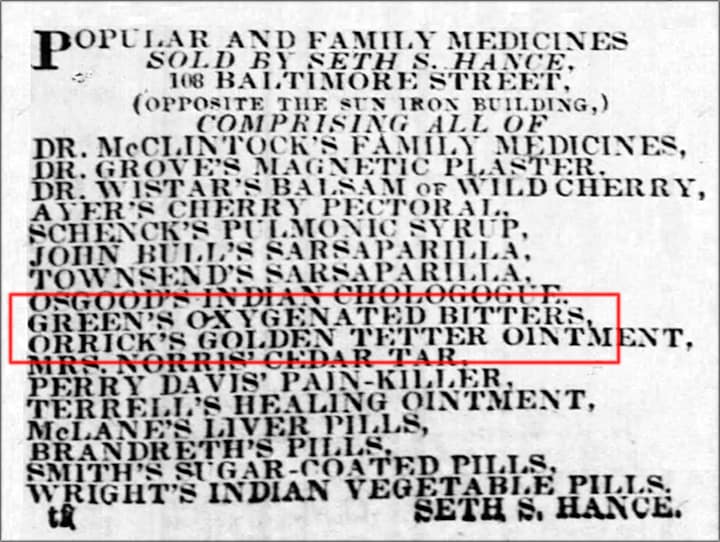 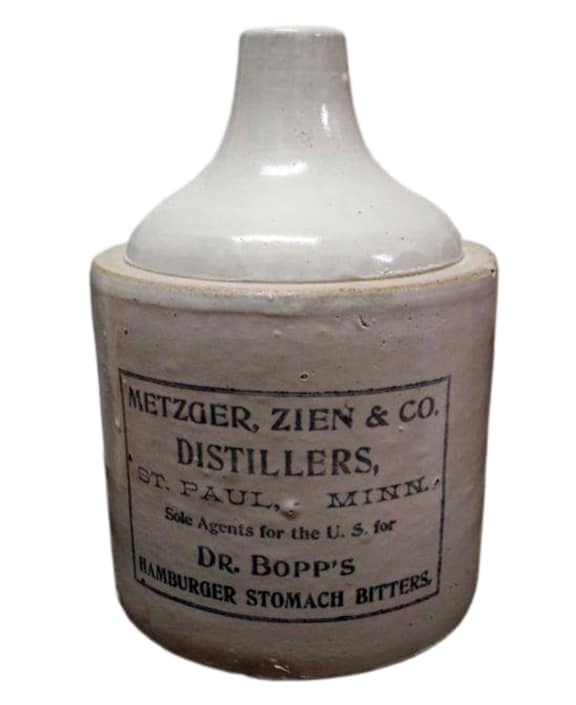 Ferdinand, here is a Dr. Boveedod’s Bitters sign. It is listed in the Ring Ham Supplement
Book. I think this is a variant sign. Its much bigger than listed. See ebay Listing – Frank Wicker 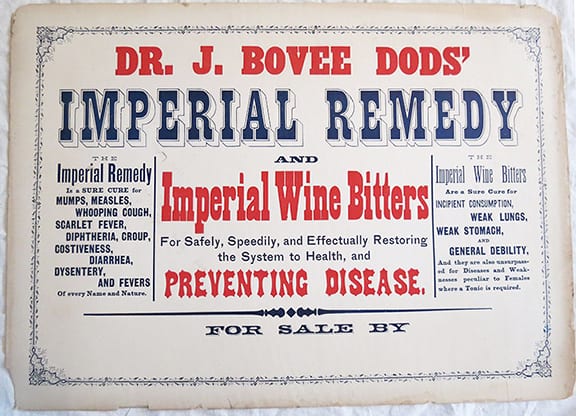 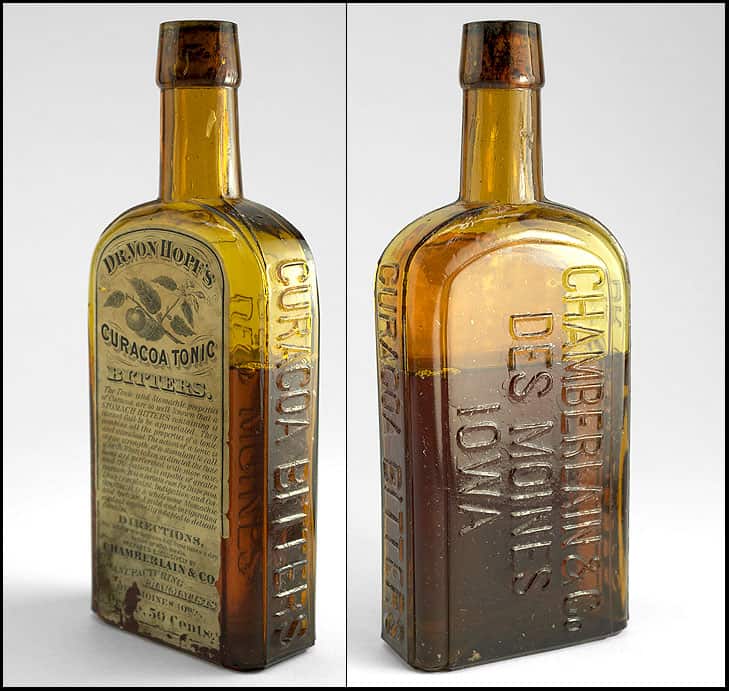 Here is an unlisted bitters that I trust Bill will pick up for Bitters Bottles Supplement 2. 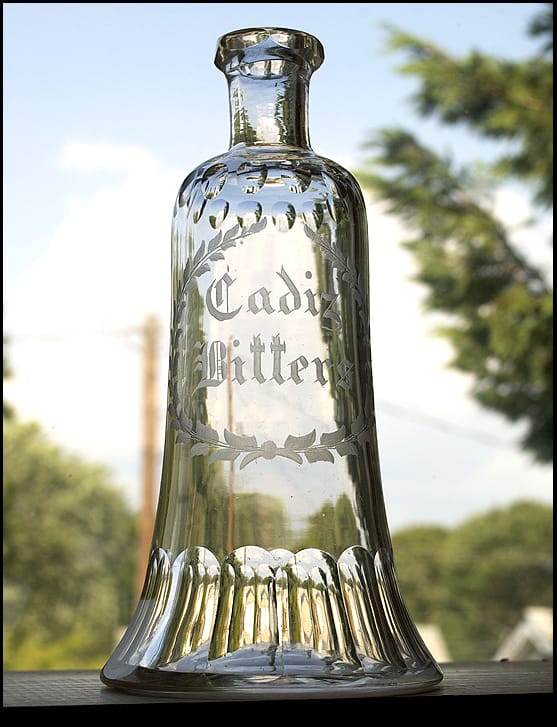 Frank Wicker tipped me of to this crate end item on ebay. Appears to be unlisted. Yale’s New Hope Tonic Bitters. See Listing Some basic searches for more information are fruitless. 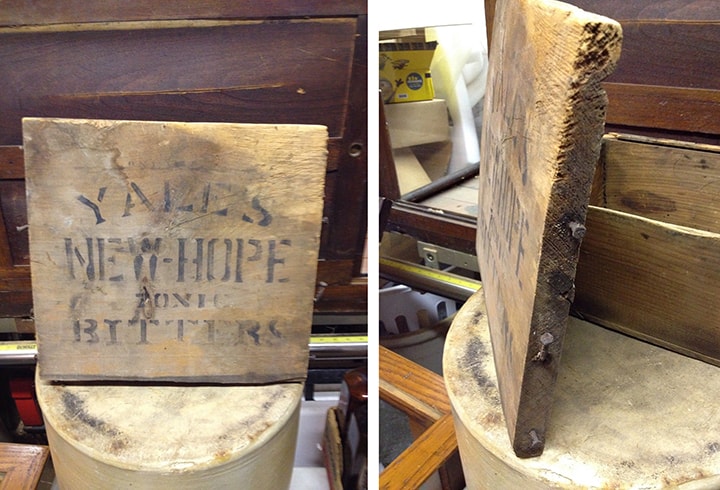 C.A. Bowen’s Old Indian Root Bitters. Looks like another . “Hi Ferd, this is a label only bitters from my hometown of Gallipolis, Ohio. Have you seen it before?” – Heath Jenkins

Charles Allen Bowen was born on July 11, 1886 in Ohio. His father was James Bowen who was born in Virginia. His mother was Josephine Bowen, born in Ohio. His spouse was Bertha G. Bowen. In 1920, 1930 and 1940 US Federal Census’ he was was listed as a manufacturer of medicines on Vinton Street and then 2nd Avenue in Gallipolis, Ohio. He died on December 6, 1959 in Glendale, Los Angeles County, California. His wife was listed as a “Patent Medicine Saleslady” in 1940. 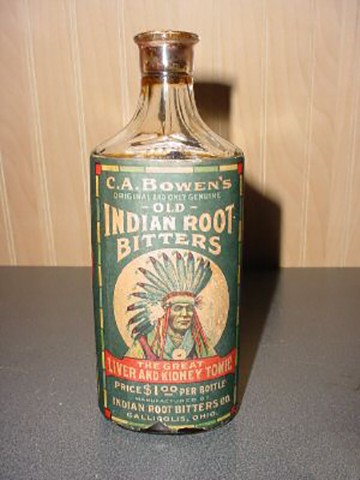 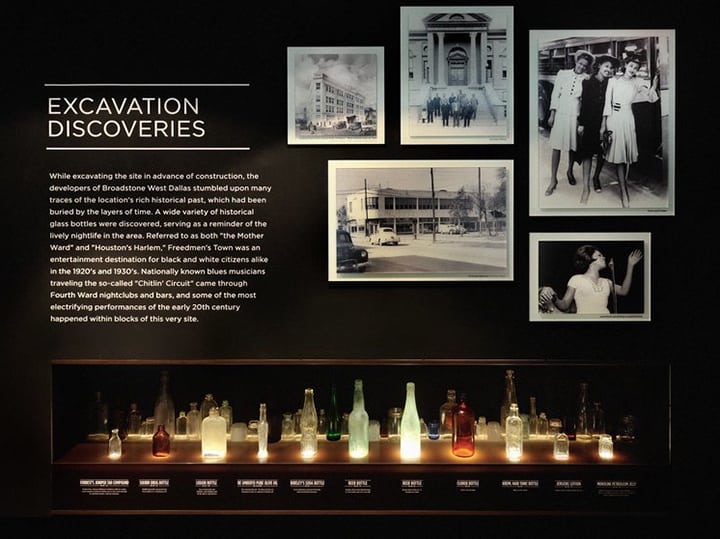 Bottles found recently at the 1616 West Dallas residential project construction site in Houston on edge of downtown. I’ll head over there and check it out! 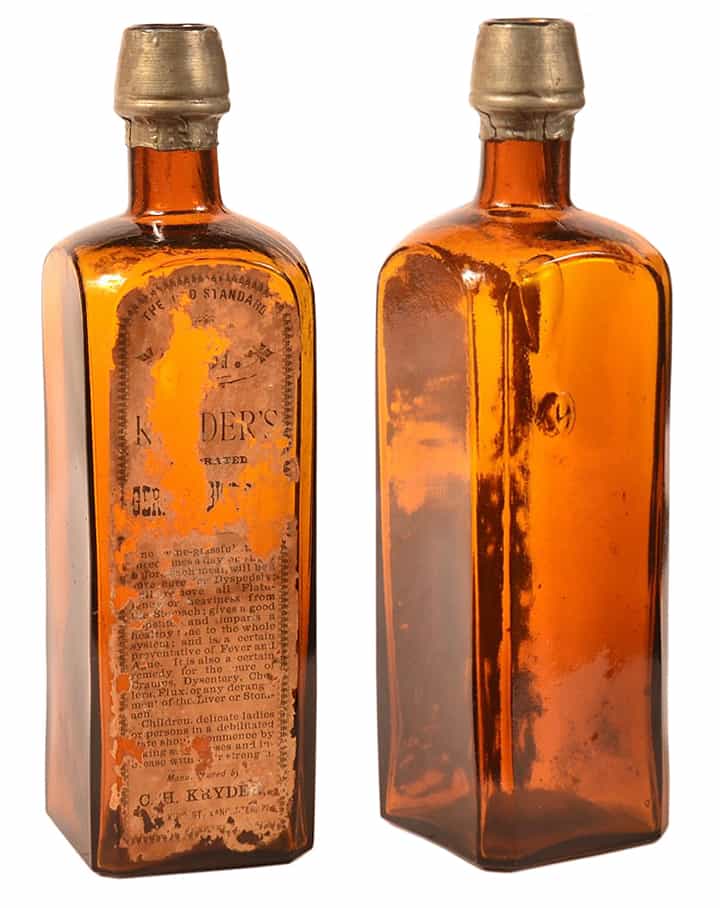 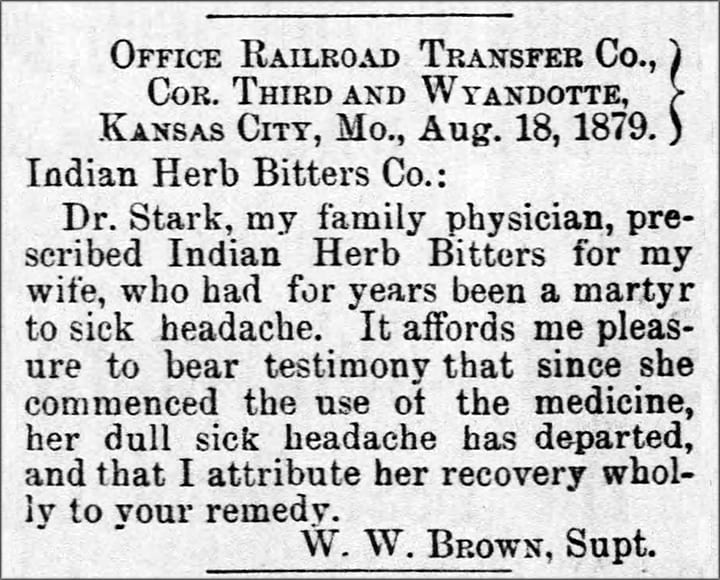 Reference to a unlisted bitters. Spanish Cocktail Bitters put out by Huey & Christ in Philadelphia around 1897. 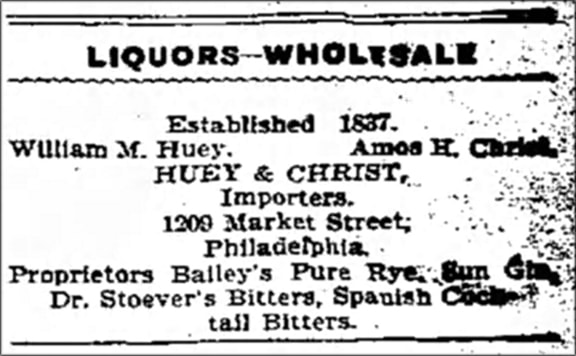 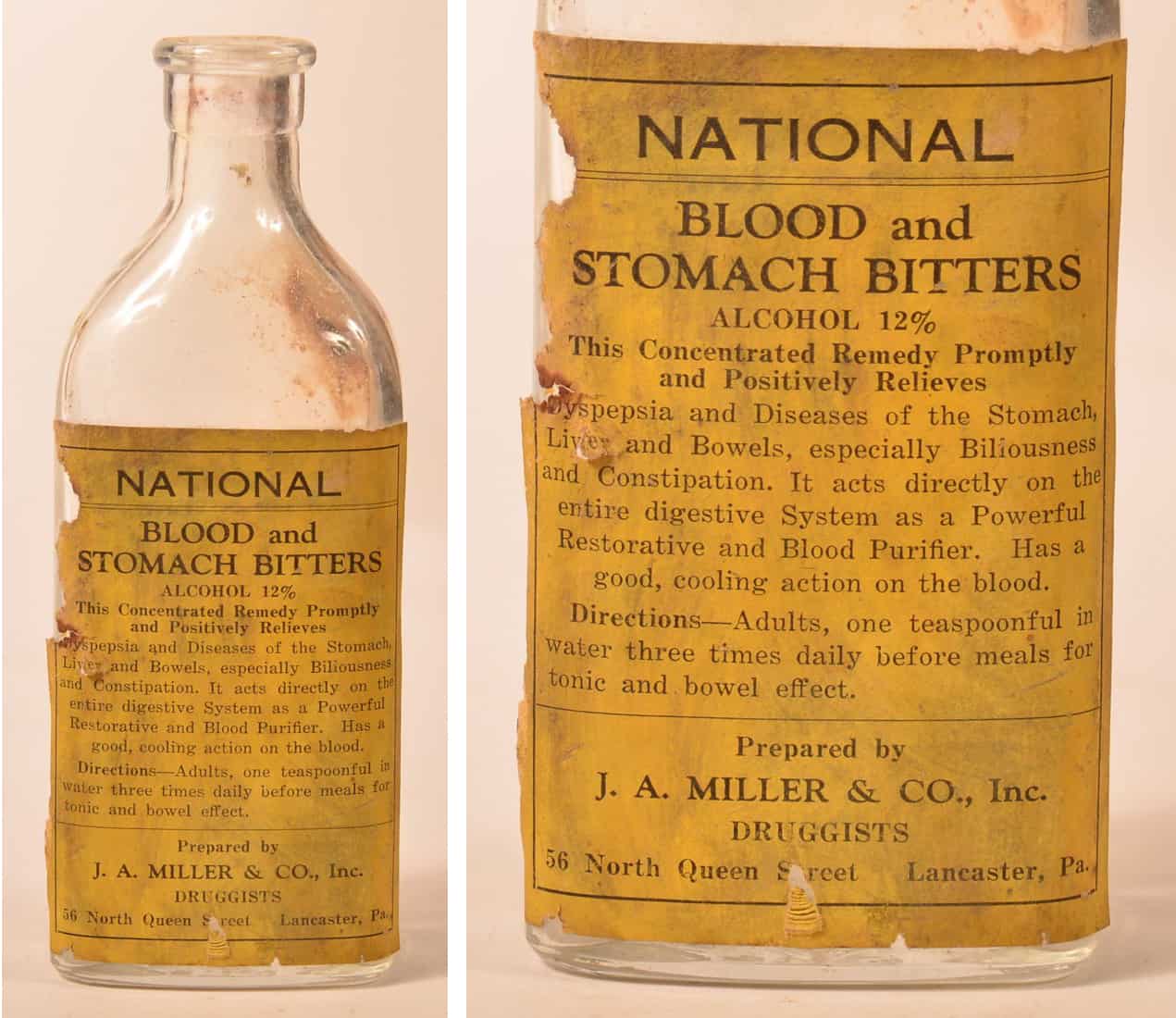 Another unlisted bitters that was in the Conestoga Auction Company auction this past Saturday of the Nolt Collection of Whiskey Memorabilia. The National Blood and Stomach Bitters. The auction house description:

An unlisted bitters that I came across while researching John Rohrer in Lancaster, Pennsylvania City Directories. From 1867, Watkins’ Celebrated Bitters. 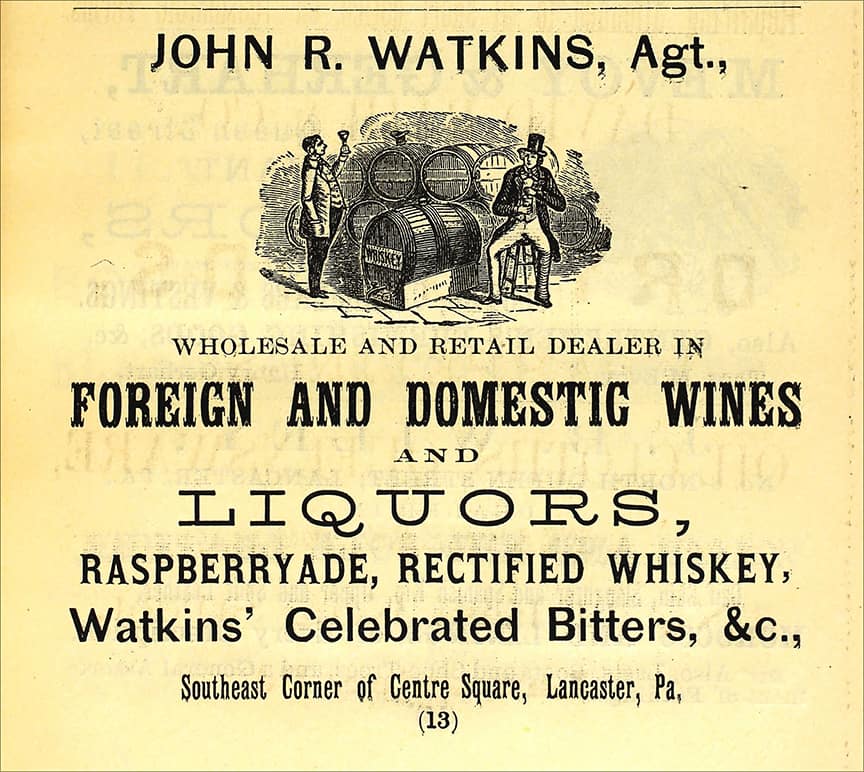 Another killer unlisted bitters that was in the Conestoga Auction Company auction yesterday of the Nolt Collection of Whiskey Memorabilia. The Surgeon Haller’s Canteen Bitters sold for $10,000 plus 21% auction house premium. The auction house description: 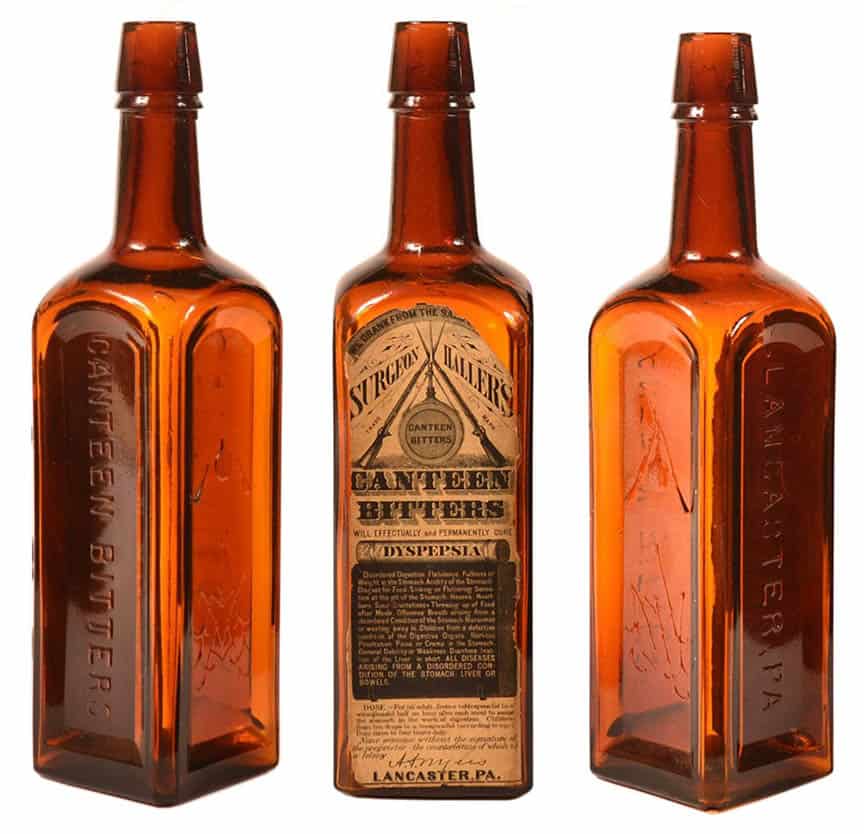 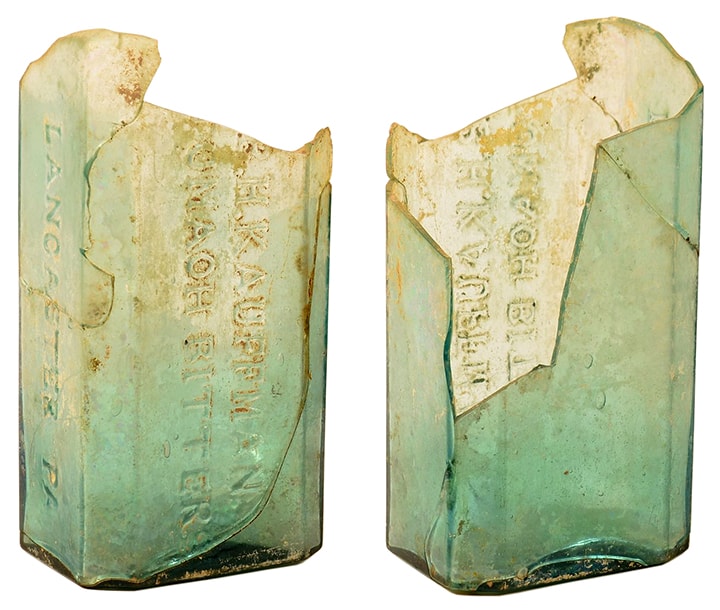 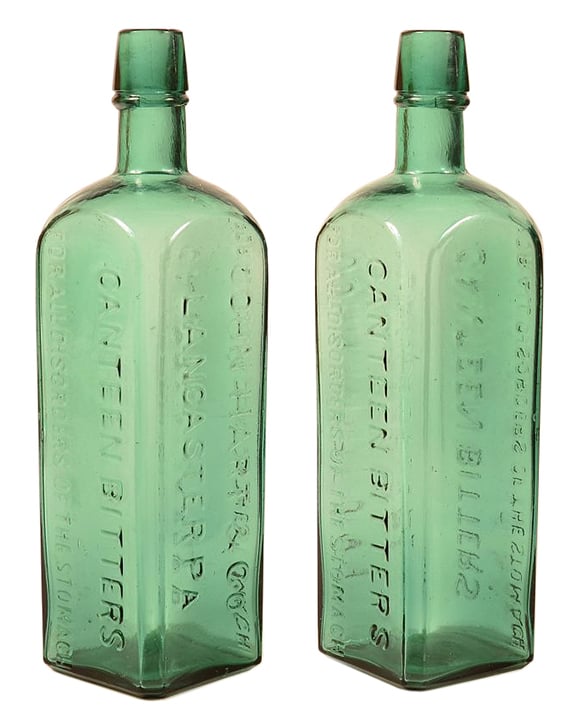 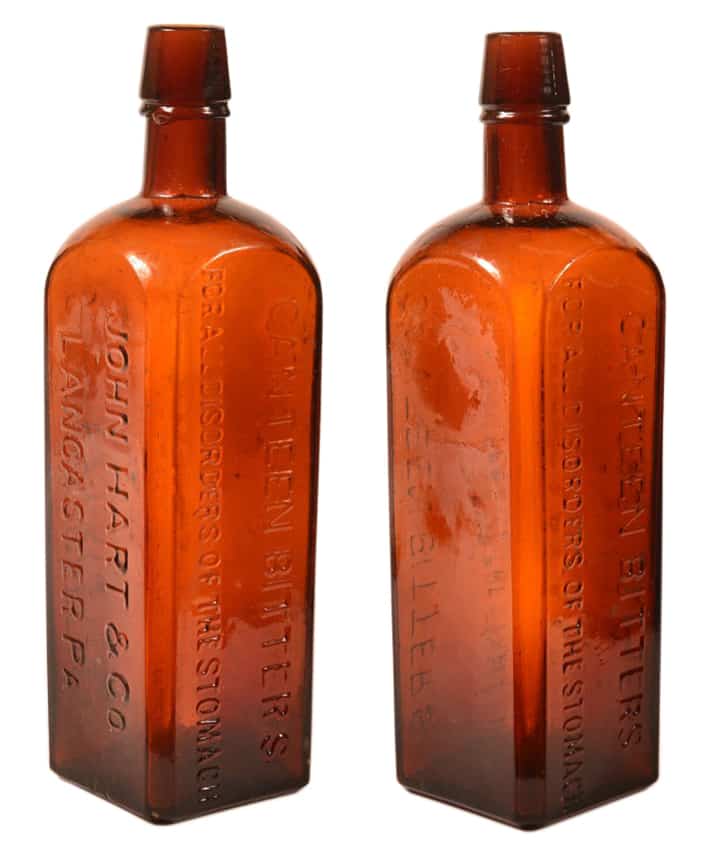 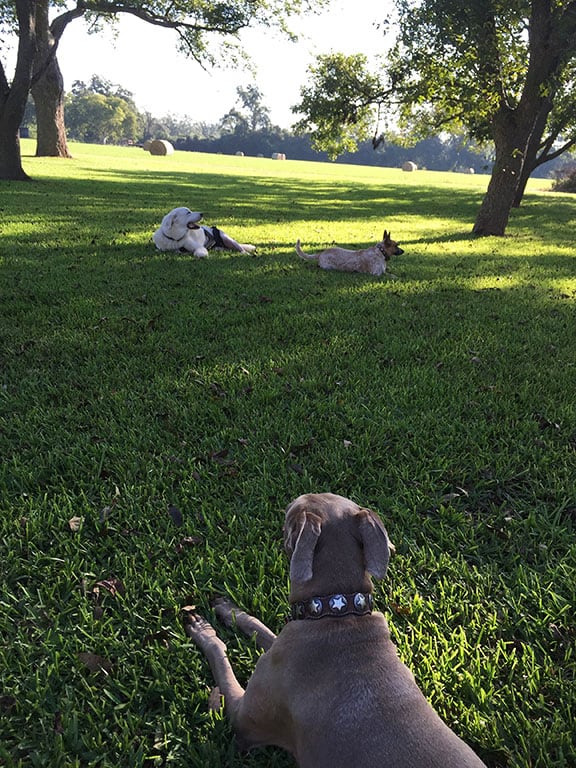 Nice fall day here in Houston. Working out of Peachridge. Sitting outside with Cooper, my wounded hero. He is getting better every day since he was hit by a car. Coco is in front and Remington is next to Cooper in his harness. He can not walk yet. Walking a dog the size of a bear, using harness handles is a challenge.

Watching the Heckler 128 Auction. Some lots are still open for callbacks. View Auction

Ferdinand Meyer V is a native of Baltimore, Maryland and has a BFA in Fine Art and Graphic Design from the Kansas City Art Institute and School of Design. Ferdinand is the founding Principal of FMG Design, a nationally recognized design consultation firm. Ferdinand is a passionate collector of American historical glass specializing in bitters bottles, color runs and related classic figural bottles. He is married to Elizabeth Jane Meyer and lives in Houston, Texas with their daughter and three wonderful grandchildren. The Meyers are also very involved in Quarter Horses, antiques and early United States postage stamps. Ferdinand is the past 6-year President of the Federation of Historical Bottle Collectors and is one of the founding members of the FOHBC Virtual Museum.
View all posts by Ferdinand Meyer V →
This entry was posted in Daily Dose, News and tagged 2015, bitters, cocktail, Daily, Dose, news, October, Spanish. Bookmark the permalink.