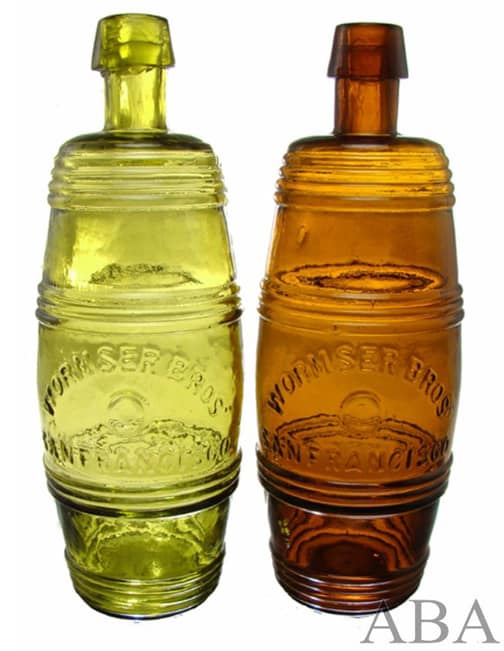 I am keeping a close eye on this extraordinary Wormser Bros. San Francisco barrel on Jeff Wichmann’s American Bottle Auctions Auction 53. There are actually two (2) Wormser’s which I have pictured below with ABA’s descriptions. Check those belly-buttons out!

Lot 89…WORMSER BROS. SAN FRANCISCO. Barrel bitters. Circa 1869. Applied top. Smooth base. Here’s an early western bitters that also has the name as the prominent liquor manufacturer. The photograph in the catalog was taken before it was cleaned so you can see it was in really good shape after we removed dirt and other residue still intact after the 40 years or so after they were found. These were considered extremely rare until a cache were found in Nevada approximately seven years ago. Since then, they may pop up here and there but nothing really to speak of until now. This and seven other amber examples were found on the Oregon coast many years ago. We were contacted by the granddaughter recently who decided to part with them. Of the examples we purchased, there were eight intact and a few others in need of restoration. We will try and fill you in on the rest of the information as we go along. Possibly the only Wormser barrel in green, you are bidding on something very special in beautiful condition, the whittle is as about as good as it gets. The streaming video shows the bottle in a bit more of yellow hue than we’d like so we ask you to go by the still pictures. Also, we mention the cleaning in the catalog and as we point out in the video, it was lightly cleaned on the inside with a minor hand cleaning on the exterior by Lou Lambert. On even the closest inspection, there is no sign of any exterior cleaning. Grades a 9.8. Note: We’ve changed some pictures as we felt the others were flat, these give the bottle a more realistic look closer to the real patina of the glass.

Lot 91…WORMSER BROS. SAN FRANCISCO. Barrel bitters. Circa 1867-1871. Applied top. Smooth base. Here we have another of the examples recently secured by us from the granddaughter of the gentlemen who found them near the mouth of the Columbia River in Oregon approximately 40 years ago. This is not the example pictured in the catalog as explained in the video. This and another seven examples were found in various condition and colors. At least four need fairly significant restoration. This example has a small flake under one of the upper ribs with a potstone near a lower rib along with a small scuff mark. Generally a very presentable example, this was one of the darker ones found and is presented fifth to the right in the group picture. Other than the aforementioned distractions, it is a very presentable example and worthy of any collection. We will grade this one an 8.5. 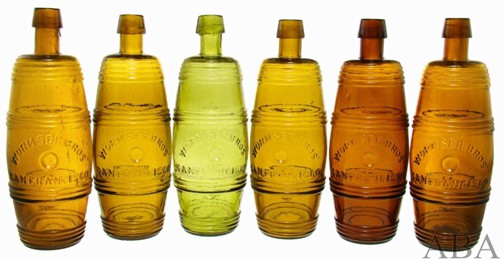 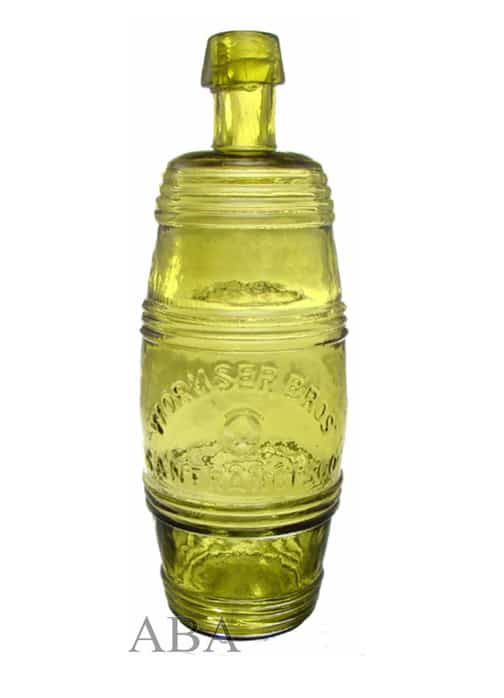 Ferdinand Meyer V is a native of Baltimore, Maryland and has a BFA in Fine Art and Graphic Design from the Kansas City Art Institute and School of Design. Ferdinand is the founding Principal of FMG Design, a nationally recognized design consultation firm. Ferdinand is a passionate collector of American historical glass specializing in bitters bottles, color runs and related classic figural bottles. He is married to Elizabeth Jane Meyer and lives in Houston, Texas with their daughter and three wonderful grandchildren. The Meyers are also very involved in Quarter Horses, antiques and early United States postage stamps. Ferdinand is the past 6-year President of the Federation of Historical Bottle Collectors and is one of the founding members of the FOHBC Virtual Museum.
View all posts by Ferdinand Meyer V →
This entry was posted in Auction News, Bitters, Color Runs, Fire Grenades and tagged American Bottle Auctions, Barrel, Figural, Jeff Wichmann, San Francisco, Wormser Bros. Bookmark the permalink.