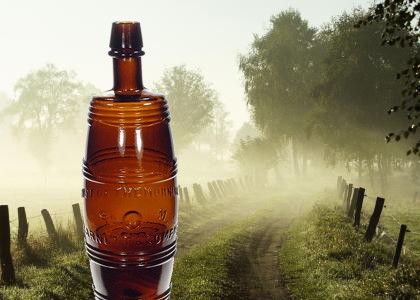 MIST OF THE MORNING

Post amended 11 July 2012 with three advertisement submitted by Eric McGuire showing the Mist of the Morning product being sold as Bitters (see below). Also see comment from Eric below. Bob Ferraro examples (2) added on 15 September 2016.

“Looks like you need to break down and buy one of these barrels Ferd. MIST OF THE MORNING was advertised as a bitters only”

Here is a barrel very similar to the Wormser Barrel (Read more on Peachridge Glass from September 2011: Watching these Wormser Bros SF Belly-Buttons). Same form, size and belly button which of course was the barrel opening or bunghole. I do not possess an example of this Whiskey (see above) barrel, as I am a Bitters collector but trust I will someday as I see from some of the pictures that I have gathered, that they come in some nice amber colors. 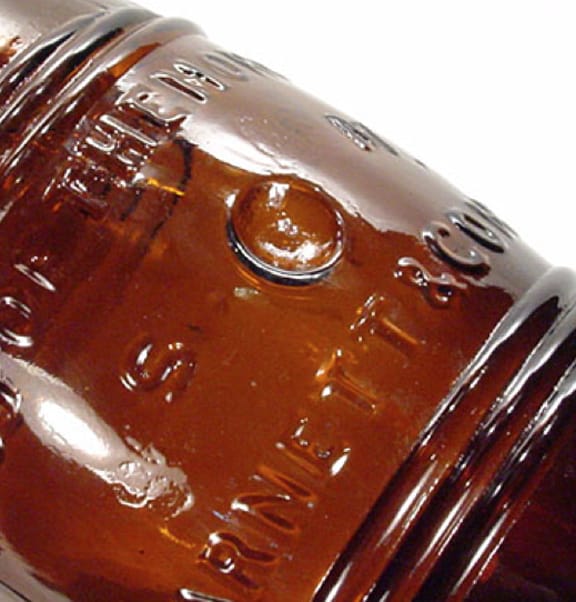 What I find especially interesting is the secondary embossing which is noted as the following taken from the pictures I posted. Notice the “S. M.” initials flanking the bunghole on most examples. The “S.M.” has been replaced by “SOLE AGENTS” on the yellow example below. The name “BARNETT & LUMLEY” is also different. I wish I could find some more information on this barrel. Hopefully this will be forthcoming so I can update the post. 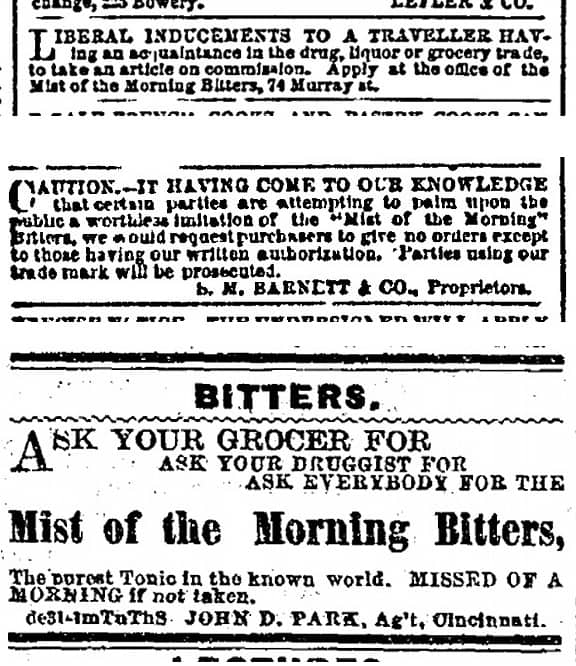 PS: The two pictures of the barrel superimposed on mist photographs is just me playing around. 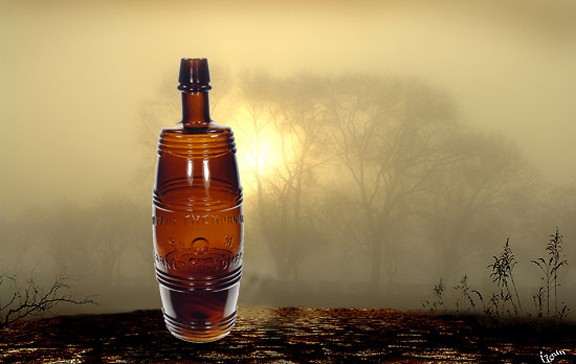 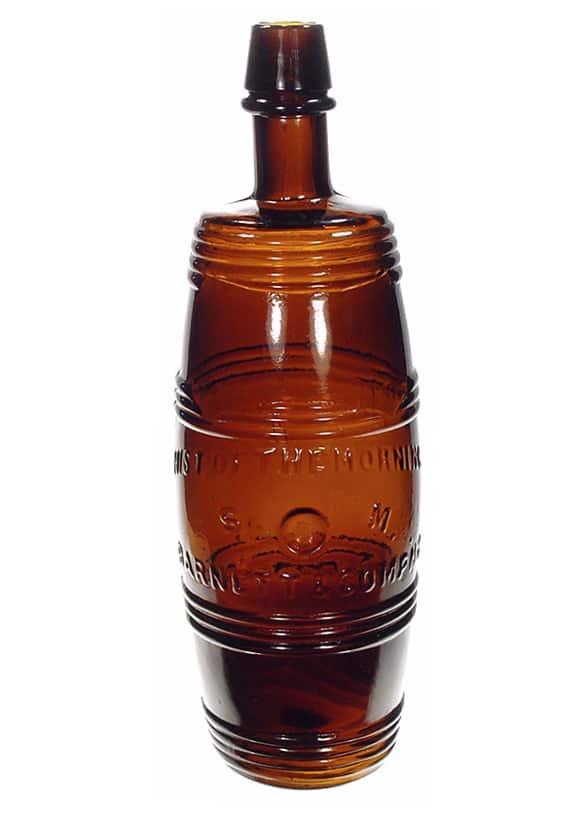 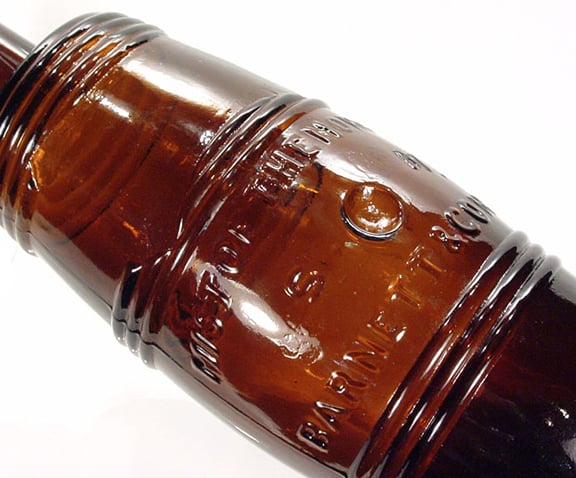 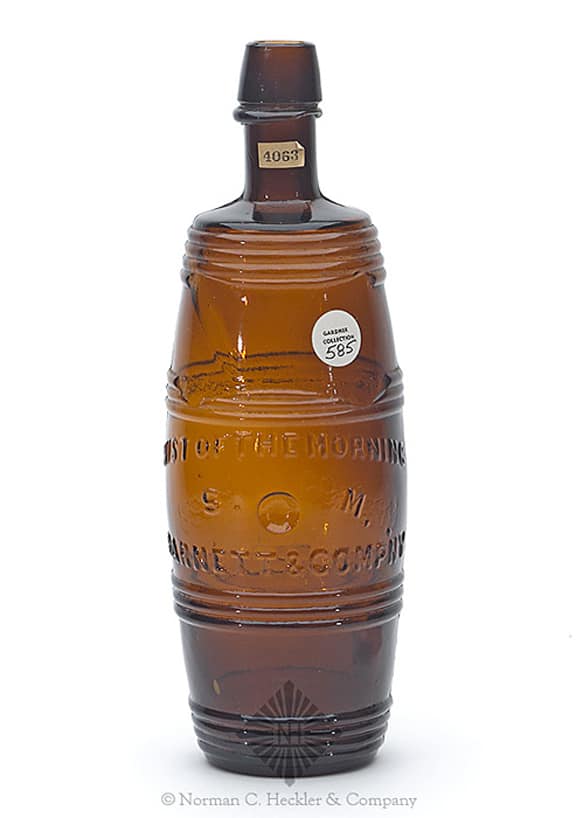 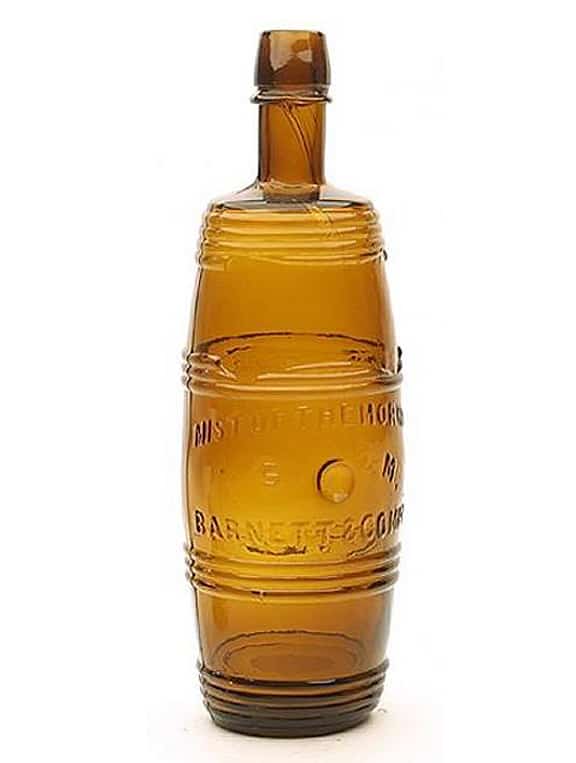 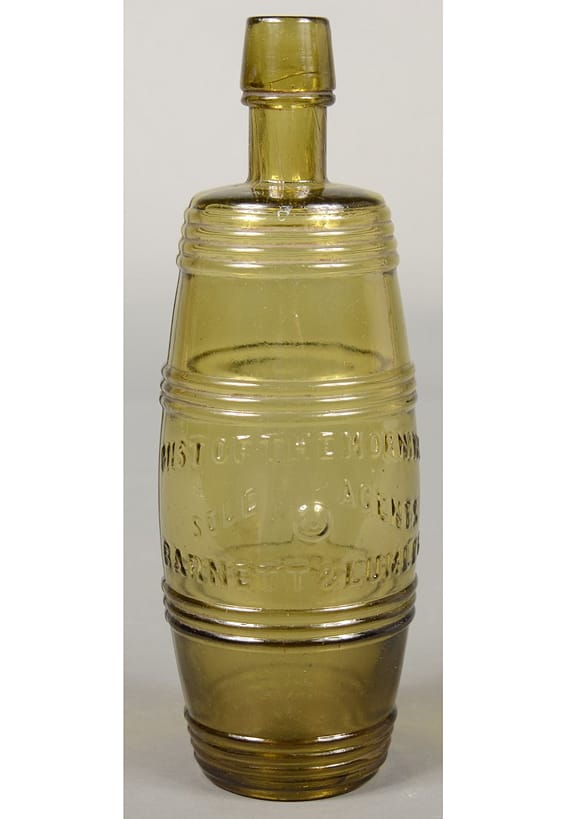 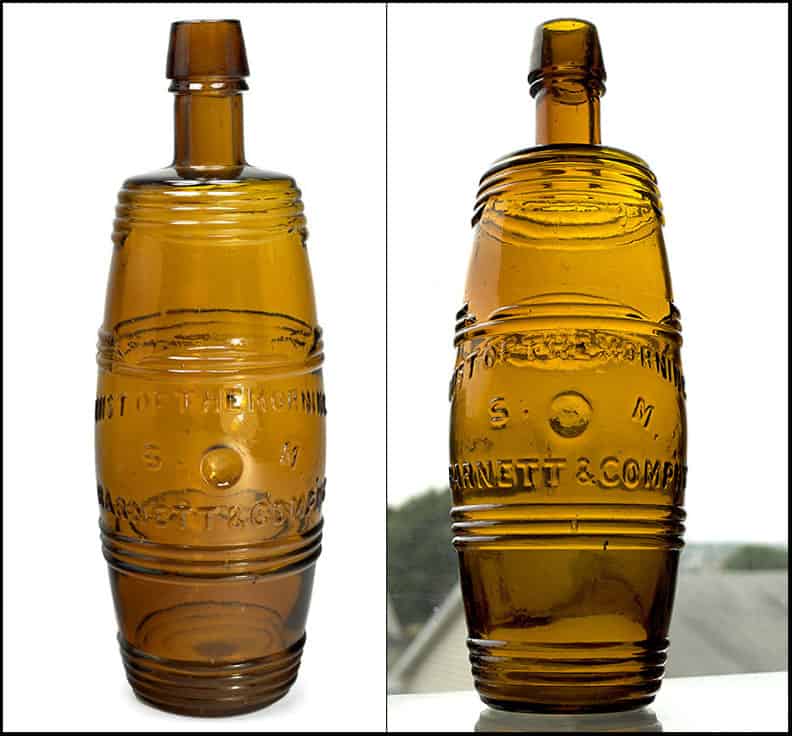 “MIST OF THE MORNING / S. M. / BARNETT & COMPANY”, (Denzin, BAR-61), New York, ca. 1865 – 1875, yellow amber barrel, 9 3/4”h, smooth base, applied double collar mouth. Fine condition. When the original mold was made for this bottle, like lot 26 had the words Sole Agent on each side of the indented circle. This embossing was later peened out of the mold and replaced with the letters S. M. Purchased from Dick Judge in 1970. – Glass Works Auctions #112 – Bob Ferraro Collection – Session 1 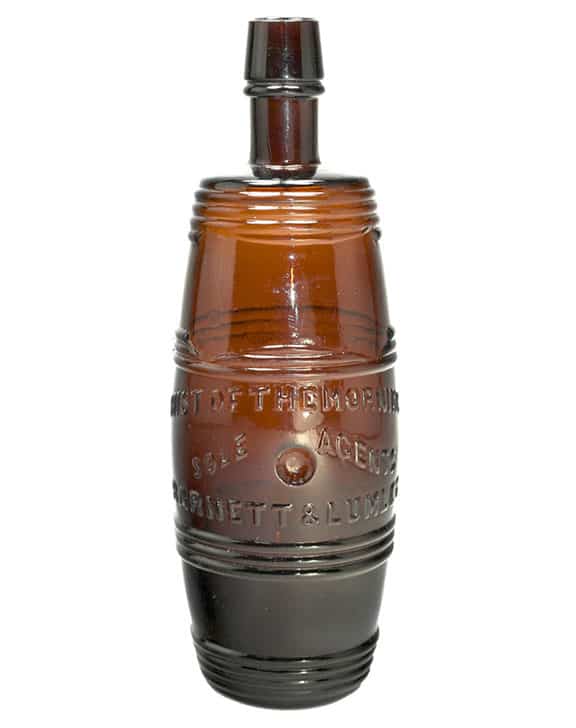 Ferdinand Meyer V is a native of Baltimore, Maryland and has a BFA in Fine Art and Graphic Design from the Kansas City Art Institute and School of Design. Ferdinand is the founding Principal of FMG Design, a nationally recognized design consultation firm. Ferdinand is a passionate collector of American historical glass specializing in bitters bottles, color runs and related classic figural bottles. He is married to Elizabeth Jane Meyer and lives in Houston, Texas with their daughter and three wonderful grandchildren. The Meyers are also very involved in Quarter Horses, antiques and early United States postage stamps. Ferdinand is the past 6-year President of the Federation of Historical Bottle Collectors and is one of the founding members of the FOHBC Virtual Museum.
View all posts by Ferdinand Meyer V →
This entry was posted in Bitters, Figural Bottles, Whiskey and tagged Barnett & Lumley, Barrel, Charles Gardner, Eric McGuire, Figural, GreatAntiqueBottles.com, Mist of the Morning, Norman C. Heckler, S.M. Barnett & Company, sole agents. Bookmark the permalink.

3 Responses to Barrel Series – Mist of the Morning