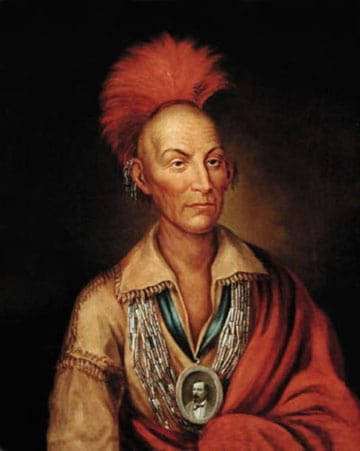 Still more arrests for selling Black Hawk Bitters that made men climb telegraph poles and throw their tools in the street!

In the notice, J.T. Gentle, a druggist from Vandalia, Missouri, was indicted on eight counts for selling Black Hawk Bitters. This is not too surprising in the 1915 pre-Prohibition temperance era as many spirits were disquised and sold as patent medicines. He said the alcohol in the bitters was sufficient to keep the product from spoiling.

In another newspaper notice, druggist, M.K. Shuggart in Iowa also had his Black Hawk Bitters seized. In court, he said it was a medicine and that it was a summer drink and should be classified with lemonade, even though the bitters was labeled 30 percent alcohol. Still more arrests for selling Black Hawk Bitters that reportedly made men climb telegraph poles and throw their tools in the street! The last from the Kansas Democrat in Hiawatha, Kansas. This is the kind of material you find in bitters researching, just like the assorted nefarious material put in a bitters bottle. 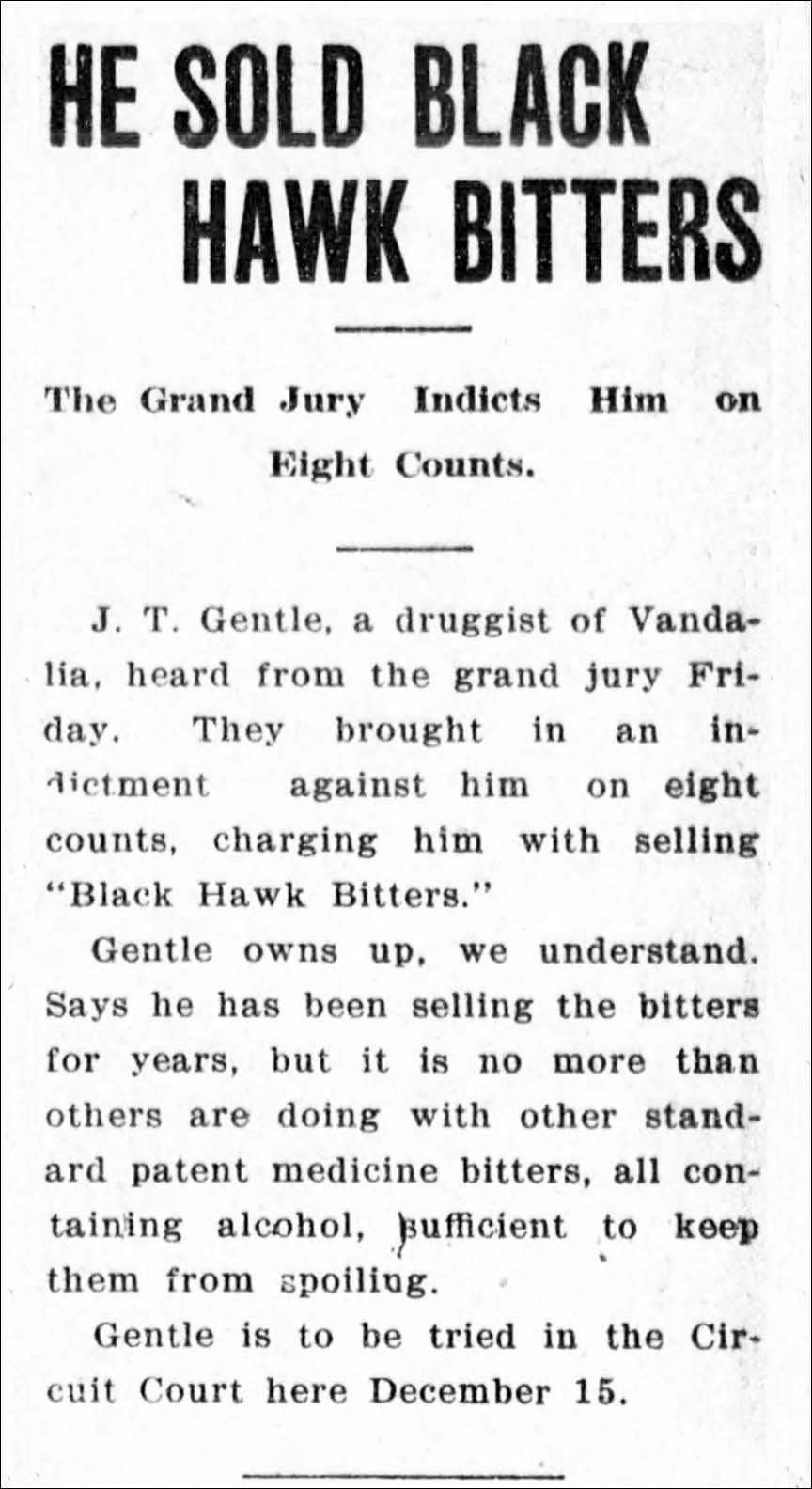 While this bitters may be unlisted, I doubt it. There are no proprietors listed and each druggist would not make his own Black Hawk Bitters. In Bitters Bottles by Carlyn Ring and Bill Ham, there is a B 114, labeled amber square for Black Hawk Stomach Bitters (Windsor’s Black Hawk Liver and Stomach Bitters) being sold by Hartz & Bahnsen, Sole Proprietors in Rock Island, Illinois in the 1890s.

In the follow-up Bitters Bottles Supplement there is a listing B 114.5, for a labeled amber square Black Hawk Stomach Bitters with a graphic of a Indian Chief in headdress. This was a tonic put out by the Columbia Chemical Co. in Saint Louis, Missouri. An example is pictured below from the Lou Hollis collection. 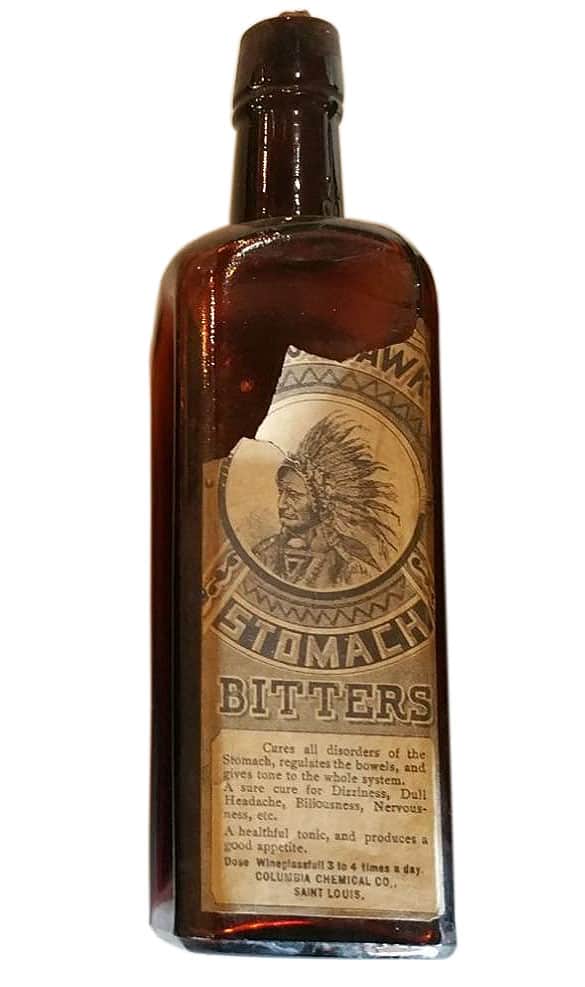 There was also a Black Hawk Bitters made by Meyer Bros. Drug Co. in Saint Louis, Missouri in 1914 as reported in National Association of Retail Druggists.

Any one of these bitters could be the Black Hawk Bitters referenced in the top advertisement.

Here is another newspaper notice (represented further below) about a fellow named Albert Lehman who was the manufacturer of Black Hawk Bitters in 1867 according to the Quad City Times in Davenport, Iowa. He was arrested for Licentious Assault for the intent to commit a rape of a Regina Magnus. That was his wife.

He was arrested for Licentious Assault for the intent to commit a rape of a Regina Magnus. That was his wife.

Evidence presented said that it appeared that Regina Magnus was the daughter of Franz Staufenbeil, who at the time was engaged with Lehman to manufacture Black Hawk Bitters. In court, the assault was proved by Regina, her mother and her father.

Albert Lehmen filed an affidavit denying the assault and claiming the prosecutions malicious. In the document given by the police magistrate, Franz Staufenbeil had been previously convicted of keeping a house of ill-fame.

Another crazy bitters story. This bitters may have been the genesis of the bitters produced in the 1890s and 1900s.

Black Hawk, (1767 – October 3, 1838) was a band leader and warrior of the Sauk American Indian tribe in what is now the Midwest of the United States. Although he had inherited an important historic medicine bundle from his father, he was not a hereditary civil chief. Black Hawk earned his status as a war chief or captain by his actions: leading raiding and war parties as a young man, and a band of Sauk warriors during the Black Hawk War of 1832.

During the War of 1812, Black Hawk fought on the side of the British against the U.S., hoping to push white American settlers away from Sauk territory. Later he led a band of Sauk and Fox warriors, known as the British Band, against European-American settlers in Illinois and present-day Wisconsin in the 1832 Black Hawk War. After the war, he was captured by U.S. forces and taken to the eastern U.S. He and other war leaders were taken on tour of several cities. 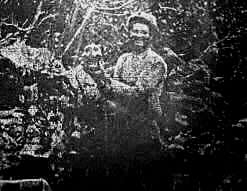 Just 49 years had passed since Black Hawk had been laid to rest in 1870 at Spring Lake, Utah, when members of the LDS Mormon Church robbed the contents of his grave in 1919. Accompanying the article is a photo of William E. Croft standing in the open grave, grinning ear to ear, while holding the skull of Black Hawk. While the living descendants of Black Hawk were outraged and heartbroken, their voices fell on deaf ears. Seemingly without conscience or remorse church leaders without a lick of civility made no apologies, in spite of a federal law passed in 1906 called the Graves Protection Act. Descendents of Black Hawk had no real legal recourse until the enactment of the National American Graves Protection Reparation Act, or NAGPRA, passed in 1994. (Source Marriott Library Special Collections Brigham Young University)

Red Cloud Bitters – One of the Chicago ‘Indians’ 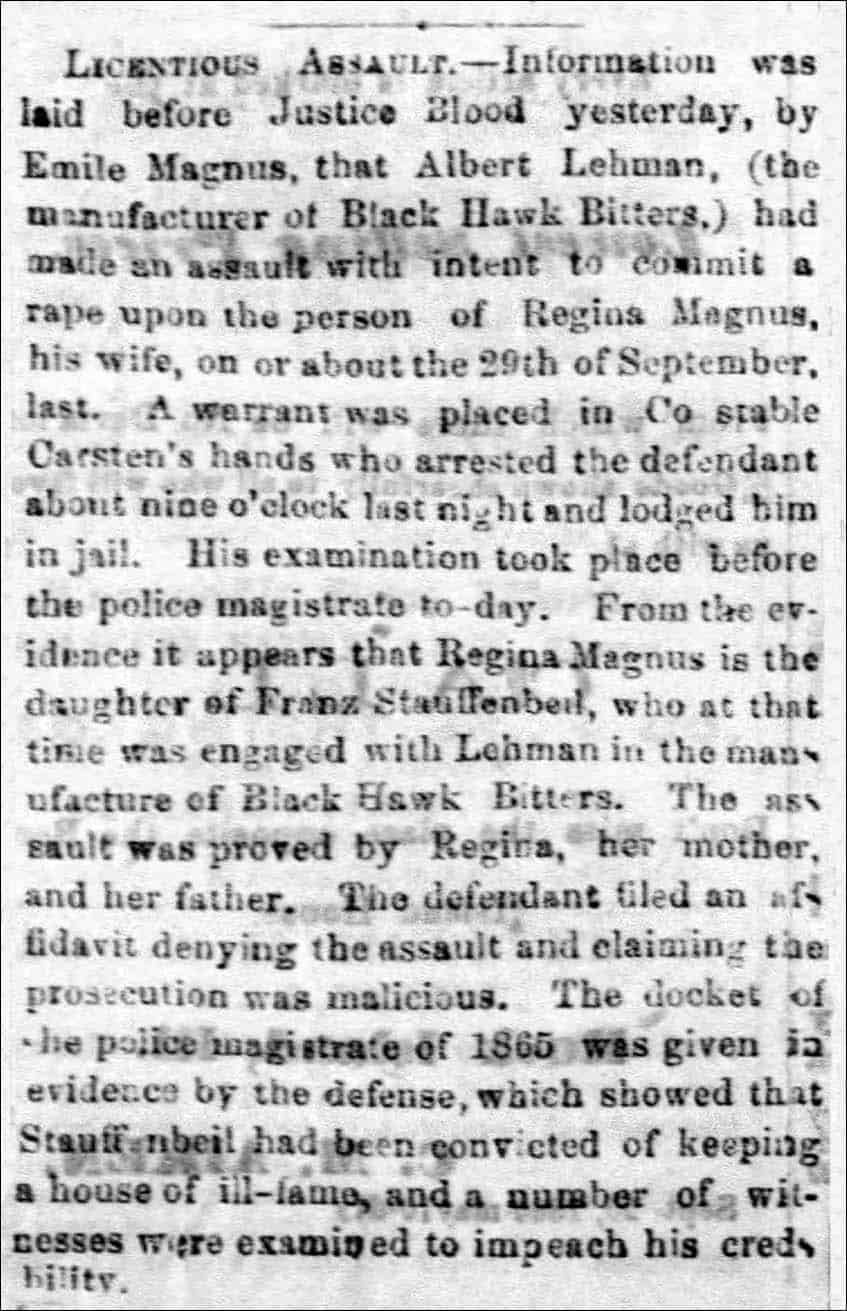