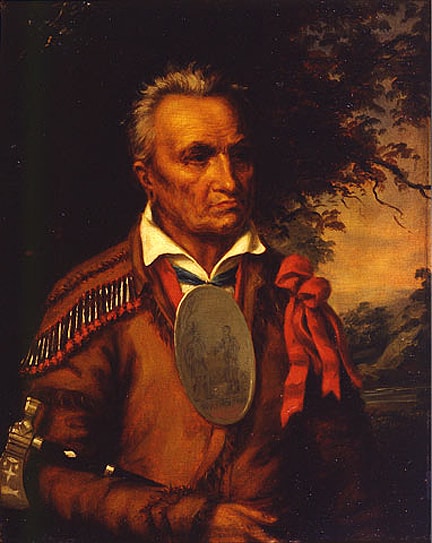 Red Jacket wearing the “Peace Medal” given to him by George Washington. Portrait by Charles Bird King, ca. 1828, Colby College Museum of Art.

Yesterday I started a series of posts on the Chicago “Indians” meaning primarily RED CLOUD BITTERS and RED JACKET BITTERS. Today the subject of the post is Red Jacket Bitters from Chicago.

Read More: He had a new variety of bitters known as Red Jacket Bitters

Red Jacket (known as Otetiani in his youth and Sagoyewatha (Keeper Awake) Sa-go-ye-wa-tha after 1780 because of his oratorical skills) (c. 1750–January 20, 1830) was a Native American Seneca orator and chief of the Wolf clan. He got his name from the bright red jacket he wore, which was a present from the British. He negotiated on behalf of his nation with the new United States after the American Revolutionary War, when the Seneca as British allies were forced to cede much land, and signed the Treaty of Canandaigua (1794). He helped secure some Seneca territory in New York state, although most of the people had migrated to Canada for resettlement after the defeat of the British. [reference Wikipedia]

He got his name from the bright red jacket he wore, which was a present from the British.

His talk on “Religion for the White Man and the Red” (1805) has been preserved as an example of his great oratorical style.

The first owner and the probable originator of Red Jacket Bitters was the Bennett Pieters and Company of Chicago, Illinois. They were listed in the 1860-61 city directory as Bennett Pieters, John F. Stafford and John D. Smedley at 149 Water Street.

Their bitters was patented in 1864. They apparently soon moved to 21 River Street because a Bennett Pieters and Co. advertisement, while at that address, refers to their product as Red Jacket Celebrated Stomach Bitters. The company moved to 31 and 33 Michigan Avenue in 1866, and was listed as distillers and wholesale liquor dealers.

In a Stranger’s and Tourists’ Guide to the City of Chicago, 1866 this given: “This firm had long and successfully pursued the manufacturer of the Red Jacket Bitters, and their business expanding beyond the limits of their former building, has erected and now occupies a store of palatial proportions—solid stone and brick, five stories high—“.

Back on Water Street in 1866, Edward McQuaid, Charles H. Schwab and John B. Smith were operating a wine and wholesale liquor business of their own. They added partners Leon Monheimer and P. Cavanagh in 1868, and merged with Bennett Pieters and Co. in 1869. The company was called the Schwab, Pieters and Co., and operated out of the five story building described above. Other changes occurred over the next ten years. [Dr. Richard Cannon]

From 1858 to 1867, says the Chicago Tribune, the name of Bennett Pieters was very well known in the city. It was connected with the Red Jacket Bitters, which were then a popular beverage, he advertised largely in the papers, and posted on fences and blank walls.

Pieters himself was a popular man among the set: he kept good saddle and carriage horses; had rooms at the Sherman house; had excellent suppers, where the guests were not called on to drink his bitters, but were regaled with champagne, which was perhaps no betters, but was certainly much more expensive, and did not openly offend any of the proprietors.

His income was a large one, but he spent it easily, and did not, like a good Chicagoan, put it in real estate. He failed to lay up treasures in these orthodox quarters, and hence when calamity came upon him he had nothing to fall back on.

In 1867 some Individual, thinking he might also make a little by going into the bitters business, began the manufacture of Red Cloud Bitters. Pieters represented this as an infringement of the right, and brought suit to have his rival enjoined. The matter was tried in the United States Court. An expert chemist analyzed Pieters’ productions, and found they consisted of poor whisky, flavored with tansy, dog fennel, jimson weed, or some other substance which possessed no special medicinal virtues. Ultimately the court decided that his right had not been invaded, and the Red Cloud and Red Jacket might have separately and independently originated bitters.

This hurt Pieters but not half as much as the analysis. People had supposed that his bitters owed their rare virtues to samples unknown to the white man, gathered at midnight in primeval forests by grim Indian chiefs, or dusky Indian girls, dark but comely, like the tents of Kedar, or the curtains of King Solomon. The secrets having been speciallly communicated to Pieters under circumstances of so private a nature that they never became public.

When the illusion was dispelled the sale of Red Jacket stopped, and Pieters’ income diminished. The less money he had the more he drank. He got involved in trouble with his partner and in 1869 departed for Washington Territory.

Returing from the west three years later, he loitered around the city doing nothing….Until last Monday, when…

The Inventor and Proprietor of the Once Famous “Red Jacket Bitters” Enlisted as
a Cavalry recruit in the United States Army…..REDUCED TO THE RANKS! 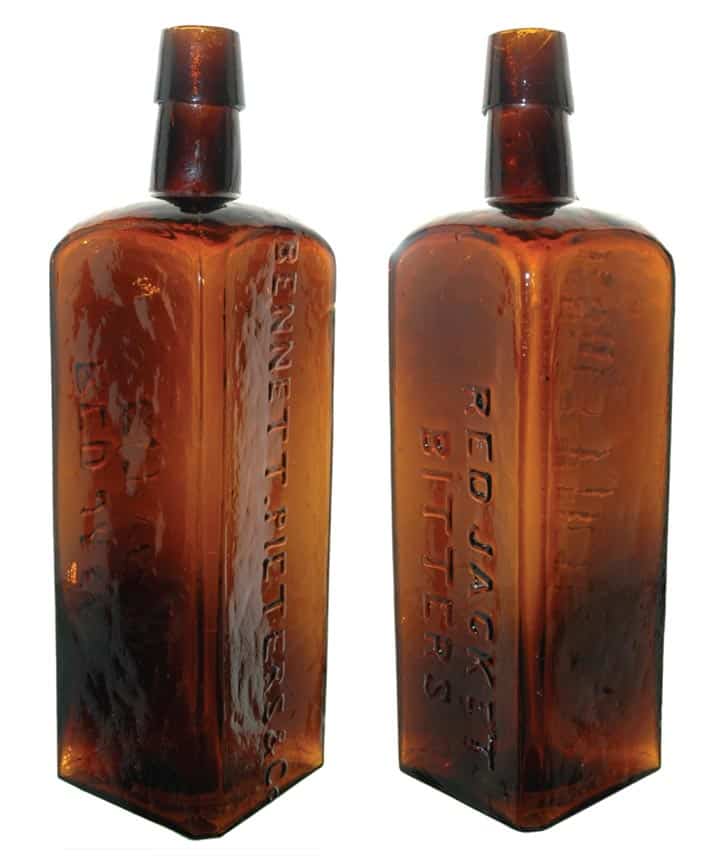 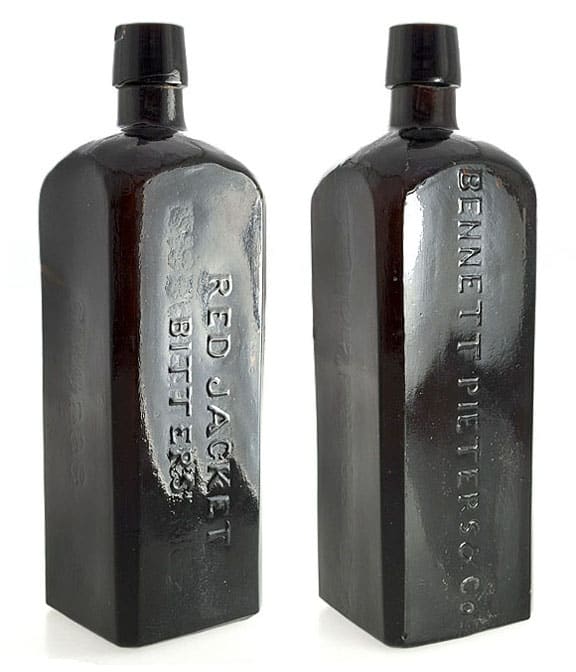 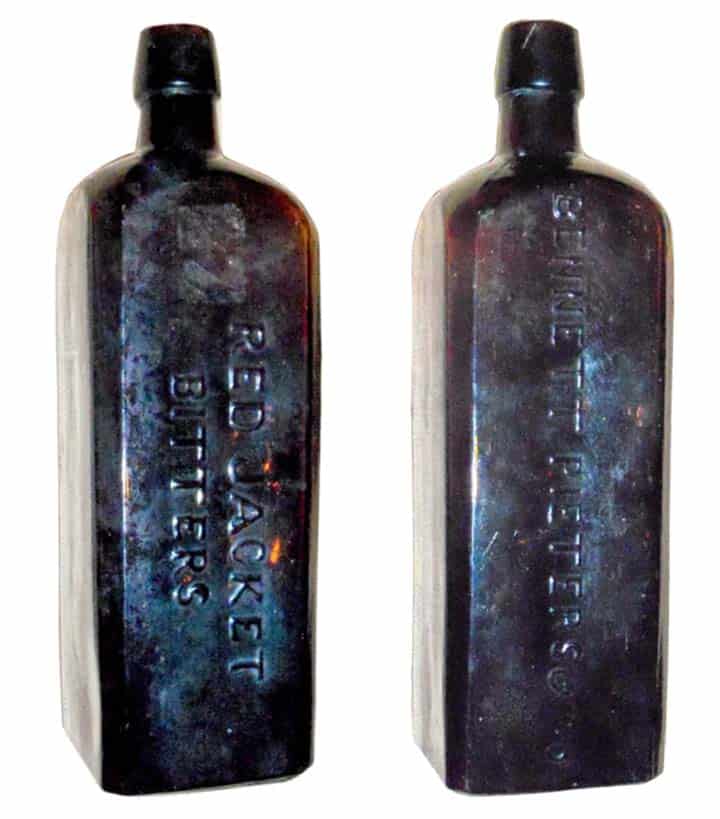 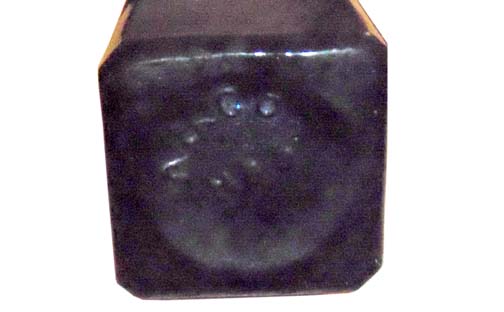 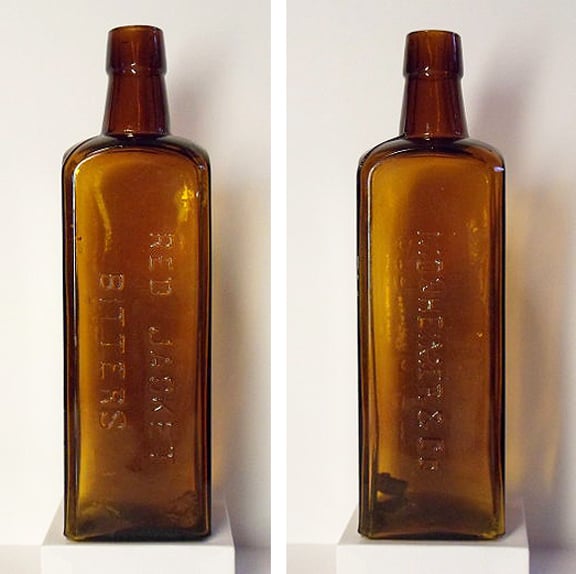 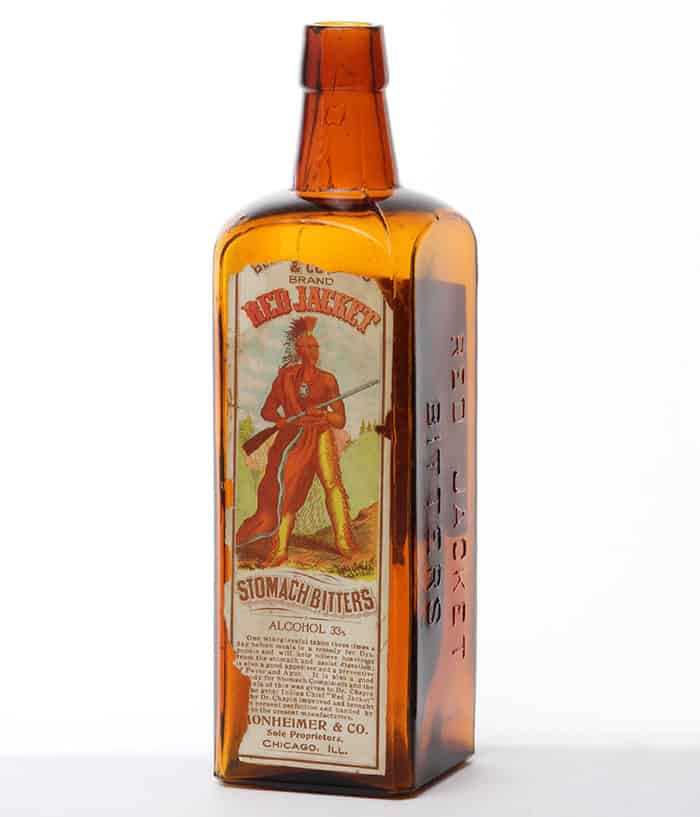 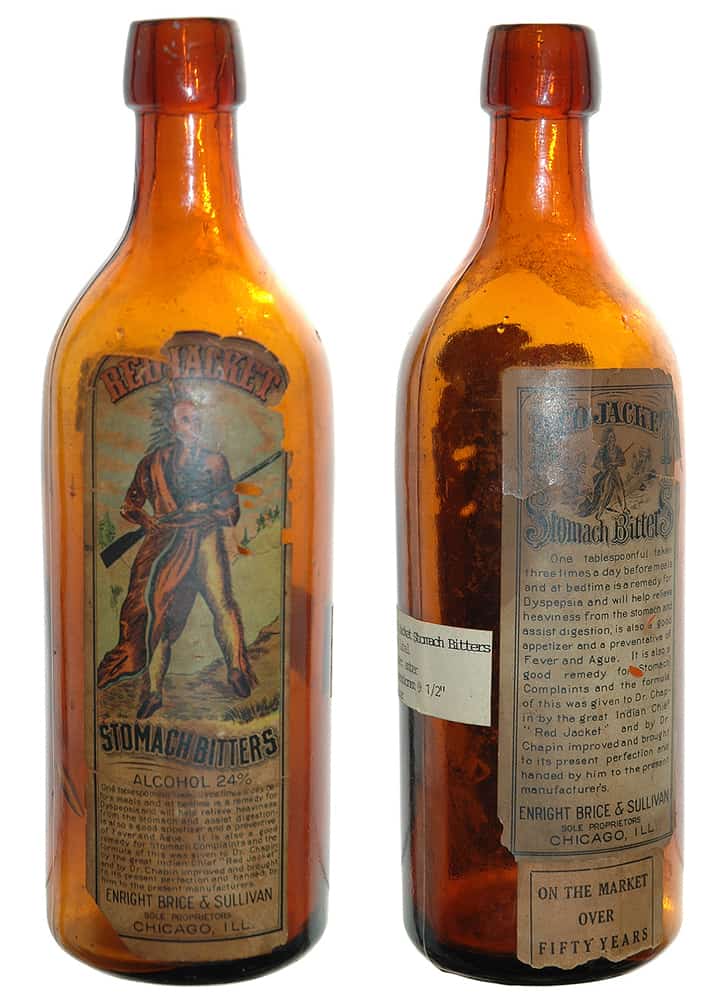 R 23.5 – L…Red Jack Stomach Bitters – Meyer Collection (This is a variant as this does not have a screw cap. I am calling it R 23.5). Notice that the same Indian art is used on the label as on the lithograph art for RED JACKET CELEBRATED STOMACH BITTERS, Bennett Pieters & Co. below)

Label: One tablespoon taken three times a day before meals and at bedtime is a remedy for Dyspepsia and will help relieve heaviness from the stomach and assist digestion, is also a good appetizer and a preventative of Fever and Ague. It is also a good remedy for Stomach Complaints and the formula of this was given do Dr. Chapin by the great Indian Chief ‘Red Jacket’ and by Dr. Chapin improved and brought in its present perfection and handled by him to the present manufacturers. 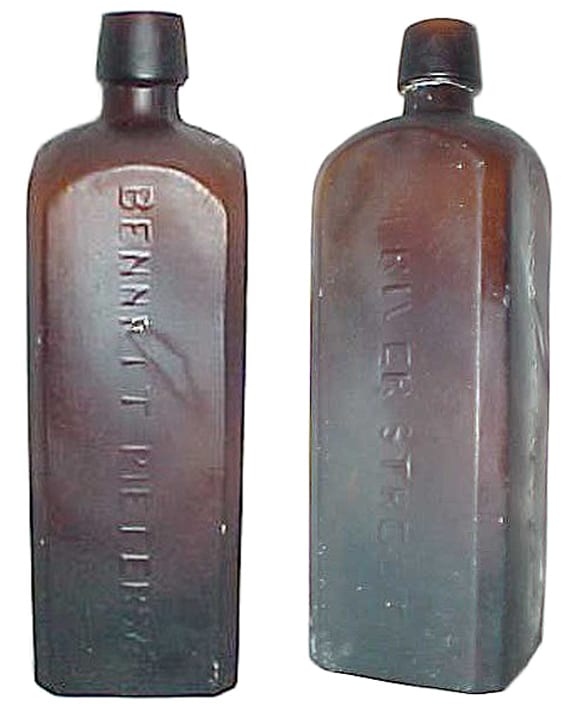 Example of BENNETT PIETERS (can not see if CO. is there) and 21 RIVER STREET. No RED JACKET BITTERS embossed on bottle – ebay

[ebay] This auction is for a vintage circa 1864 to 1865 Bennett Pieters brown Bitters bottle. It bears the early 21 River Street address in Chicago, Illinois. The bottle is square, has concave sides and measures approx. 9 1/4″ tall and 2 7/8″ square bottom with chamfered sides.

I researched this bottle on the web and my findings were that Bennett Pieters Company first started the Red Coat Bitters sales in 1864 at the 21 River Street location in Chicago. They then moved to 31 – 33 Michigan Ave location in 1866. The bottle is not marked Bitters but the company history indicates the patent for Red Coat was awarded in 1864 so I suspect it was not on the very early bottles.

I acquired this Bitters bottle along with several other Chicago bottles that were wrapped in very old newspapers and stored in a vintage wooden crate marked Rudolph Stecher Brewing Co. in Murphysboro, Illinois. 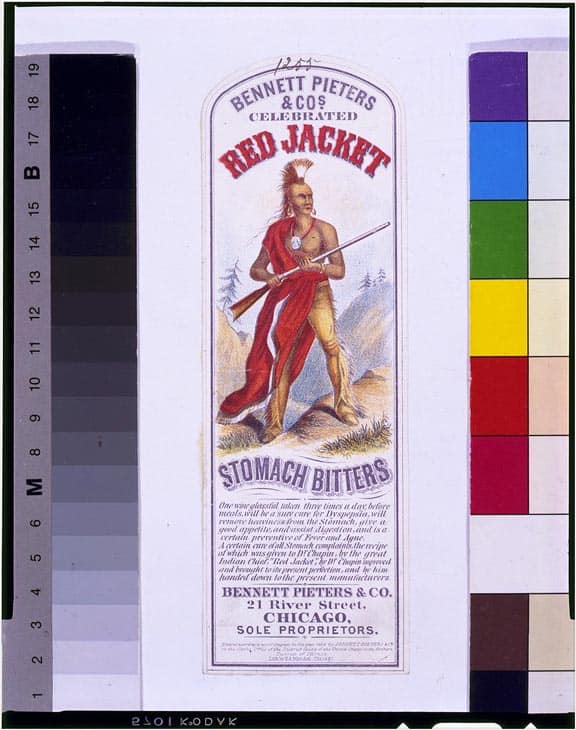 Ferdinand Meyer V is a native of Baltimore, Maryland and has a BFA in Fine Art and Graphic Design from the Kansas City Art Institute and School of Design. Ferdinand is the founding Principal of FMG Design, a nationally recognized design consultation firm. Ferdinand is a passionate collector of American historical glass specializing in bitters bottles, color runs and related classic figural bottles. He is married to Elizabeth Jane Meyer and lives in Houston, Texas with their daughter and three wonderful grandchildren. The Meyers are also very involved in Quarter Horses, antiques and early United States postage stamps. Ferdinand is the past 6-year President of the Federation of Historical Bottle Collectors and is one of the founding members of the FOHBC Virtual Museum.
View all posts by Ferdinand Meyer V →
This entry was posted in Bitters, History, Liquor Merchant and tagged Bennett, British, Canandaigua, Charles H. Schwab, chicago, Dr. Richard Cannon, Edward McQuaid, Enright & Brice, Ilinois, John B. Smith, John D. Smedley, John F. Stafford, Leon Monheimer, Otetiani, Pieters, Red Jacket, Seneca. Bookmark the permalink.